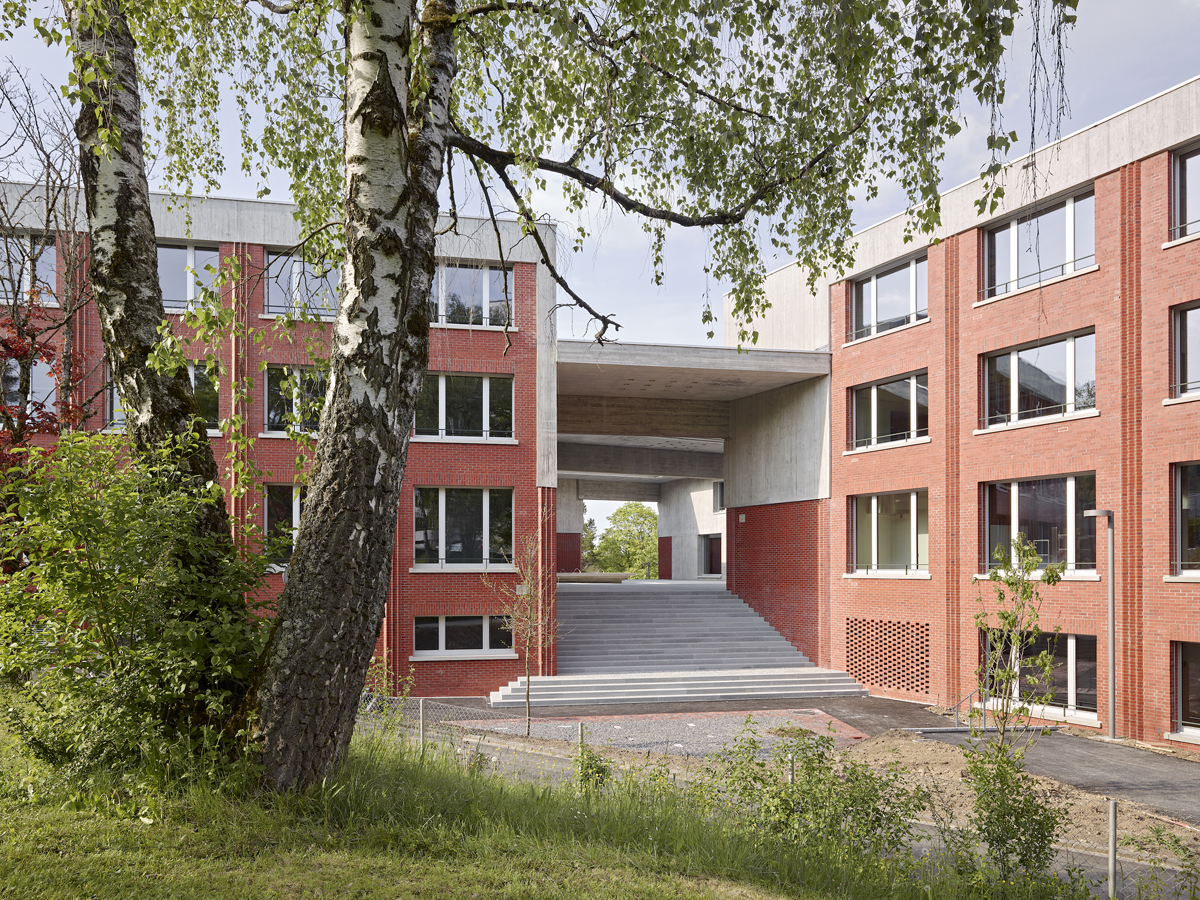 “We build for normal people.” We seek out spaces where people are encountered in their existence. Building has a lot to do with everyday life and conventions. We examine and ultimately expand them. Exceptions and inventions are welcome by-products of the daily design process. The deep layout of the Diener-Areal (2005-09), for example, the terrasse commune at Kraftwerk1 Heizenholz (2008-11) or the cluster layouts at that site and, most recently, the roofed central courtyard of the Schauenberg school (2014-19).

Four buildings with red brick cladding house the various school facilities of the Schauenberg school under one large roof. Seven pre-stressed beams made of fair-faced concrete support the roof which joins the school’s divisions, creating a large complex. With its striking spatial gesture, the roof signals the school’s public importance in the district and covers an expansive schoolyard. Three square windows in the roof allow schoolchildren to see the sky. The edges of the openings are stepped, reducing the moment between the schoolyard and the universe to just a few centimetres. A large fountain reflects the sky and provides a place for the children to sit. The exposed brick façades of the wings reference traditional school construction materials. Numerous Zurich schools are made of red exposed brick, such as the Letzi school by Ernst Gisel dating from the 1950s.

The school’s block-shaped wings are aligned parallel and transverse to the course of the contour lines. The slight rotations of the four building structures create an organic appearance and simultaneously moderate the site’s various geometries. Its topography is defined by a pronounced hillside situation, dropping off towards the creek bed of the Neugutbach. Enormous broad-leaved trees along the creek line the south and east sides of the school complex. The orthogonal structure of the Lerchenberg housing estate by the architects Walter Gautschi and Otto Rotach from the early 1970s to the west of the school complex is also striking. Typical blocks of flats from the 1950s are located to the north.

The schoolyard has one entrance from each cardinal direction. These four entrances connect to the existing Lerchenhalde, Bergacker and Im Hagenbrünneli streets, closely linking the school with the residential quarter. Aside from the main entrance to the west, accessible at ground level from the Lerchenhalde, three outside stairs with a view of the treetops lead to the roofed schoolyard. The entrances to each building are directly accessible from the schoolyard. In addition, the four parts of the school are interconnected in the basement.

The various uses are distributed among the four wings around the central schoolyard. Shared school uses are arranged thematically in the basements of the individual buildings. An entryway forms the prelude in the gymnasium wing. It serves as a grandstand with a view of the gym for spectators. The teachers’ lounge and various offices are directly connected to the schoolyard as well. There is a dedicated area for the cafeteria which can be used independently of school operations. In the warm time of the year, the schoolyard can be used for outdoor cafeteria seating. The multi-purpose room and library are in close neighbourhood of the cafeteria wing. Three classrooms, two group rooms and a common room form an autonomous cluster respectively. Together, the parts form a multi-layered whole in which the school can be experienced as a community and children are able to perceive their individual school environment. 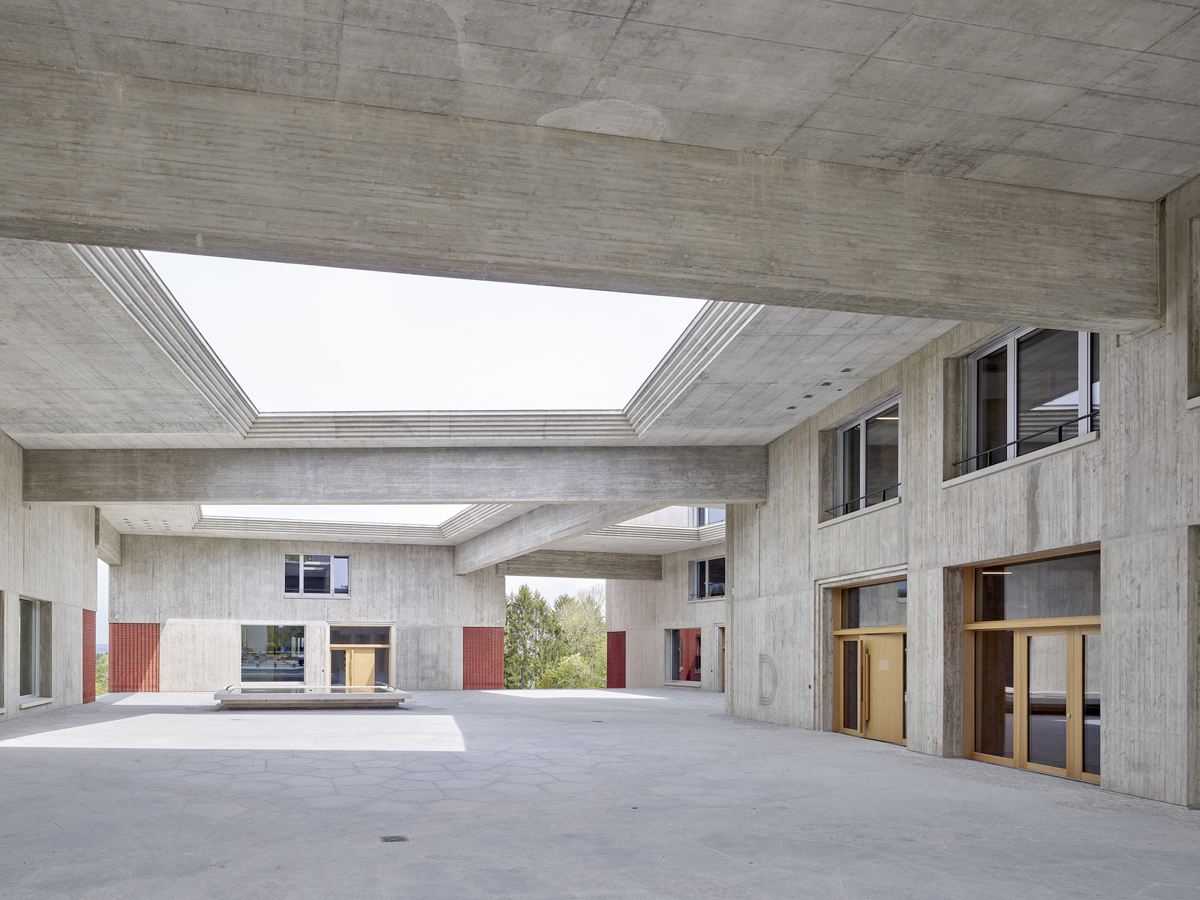 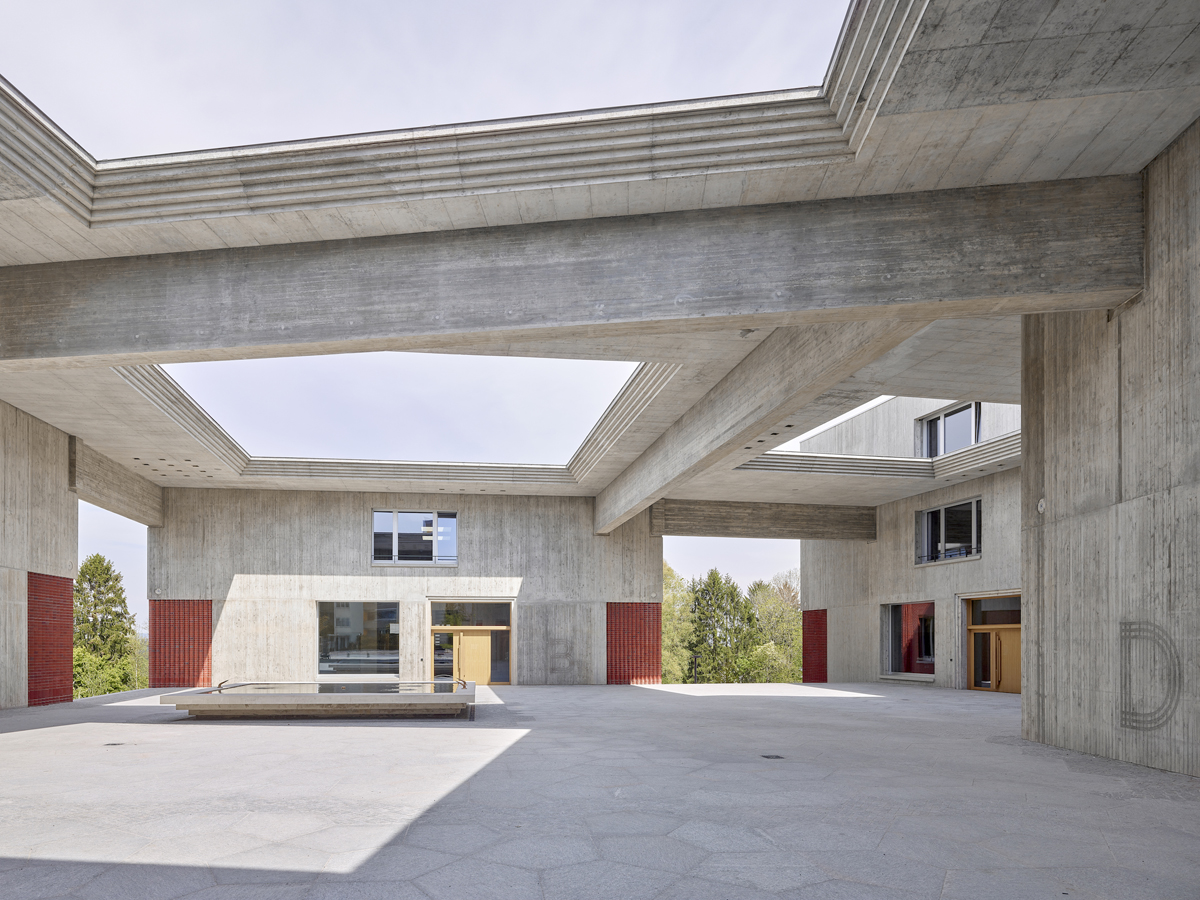 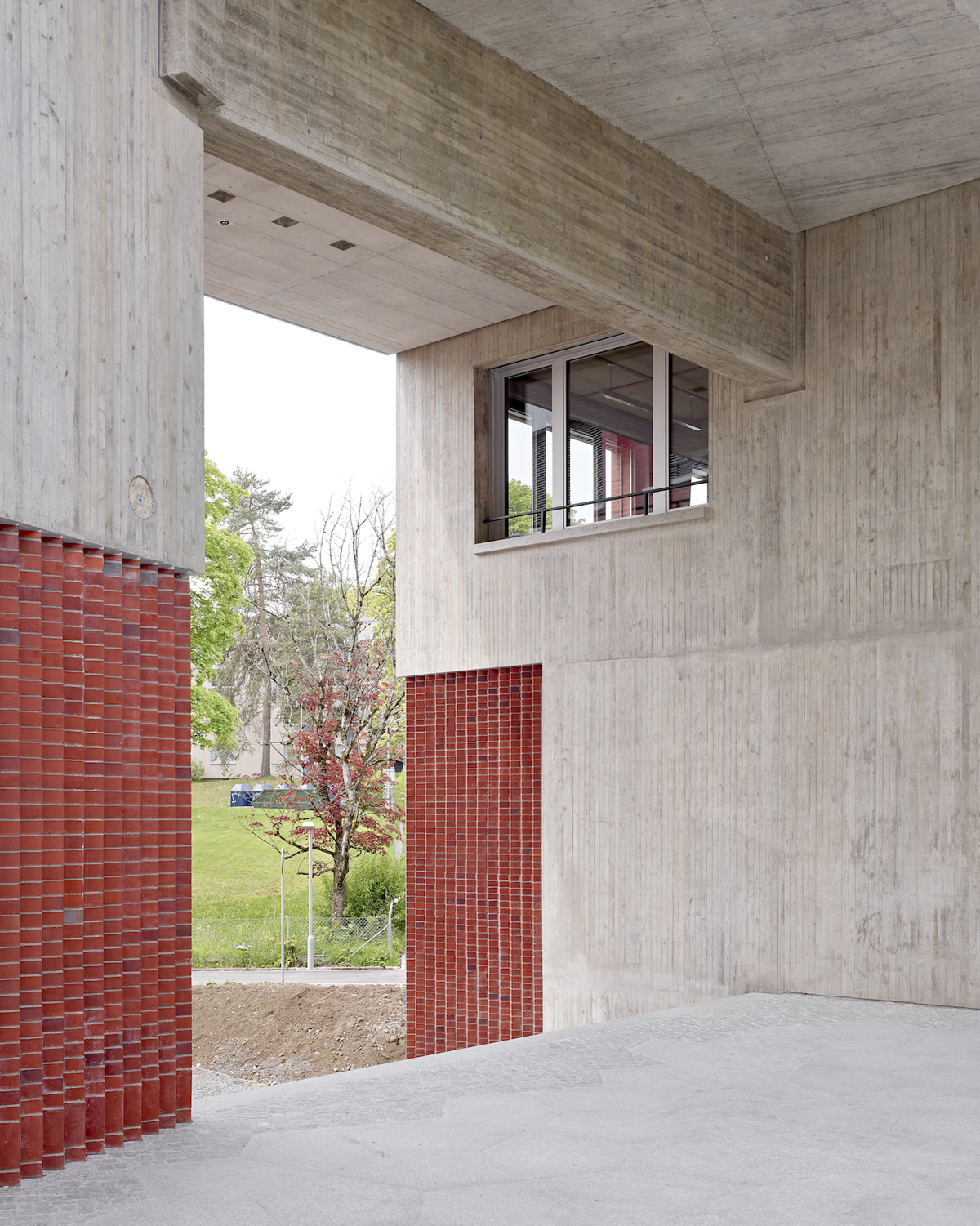 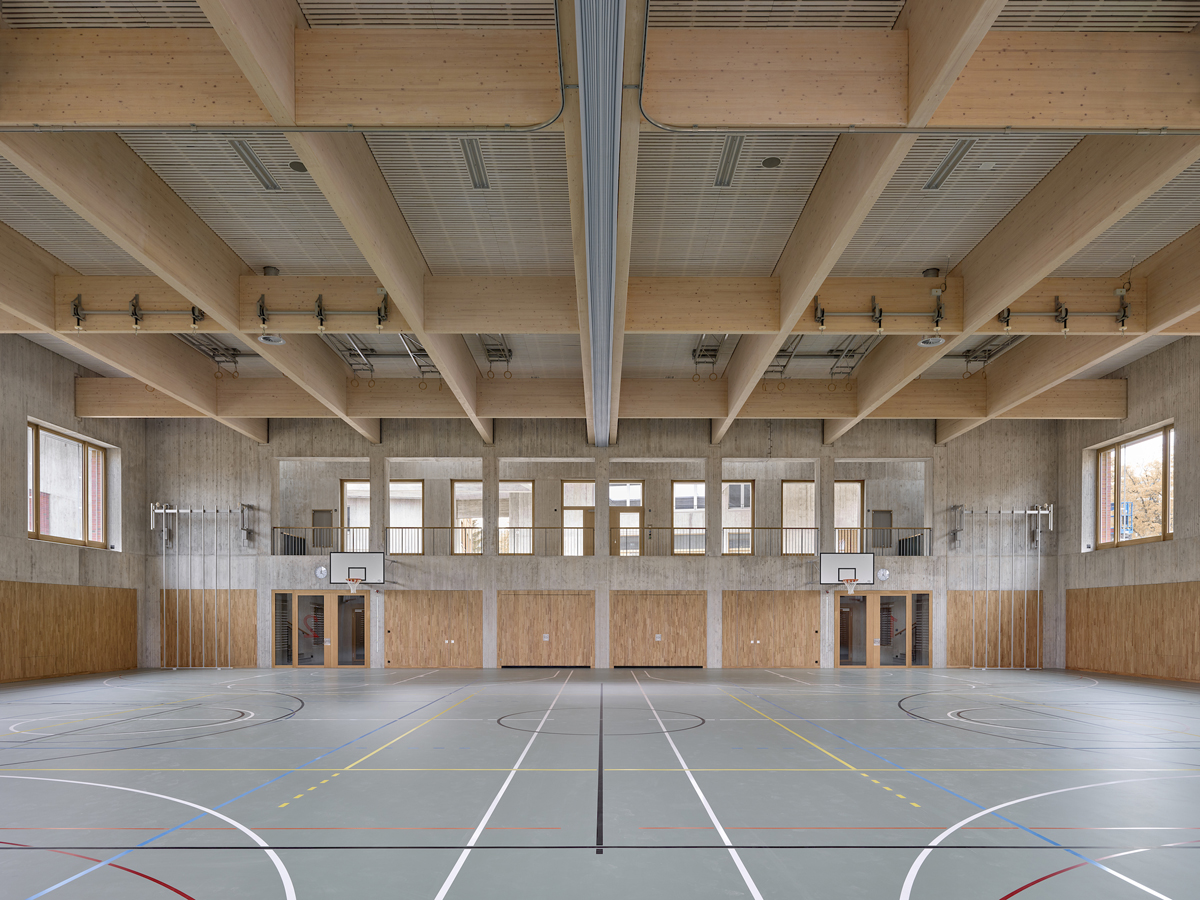 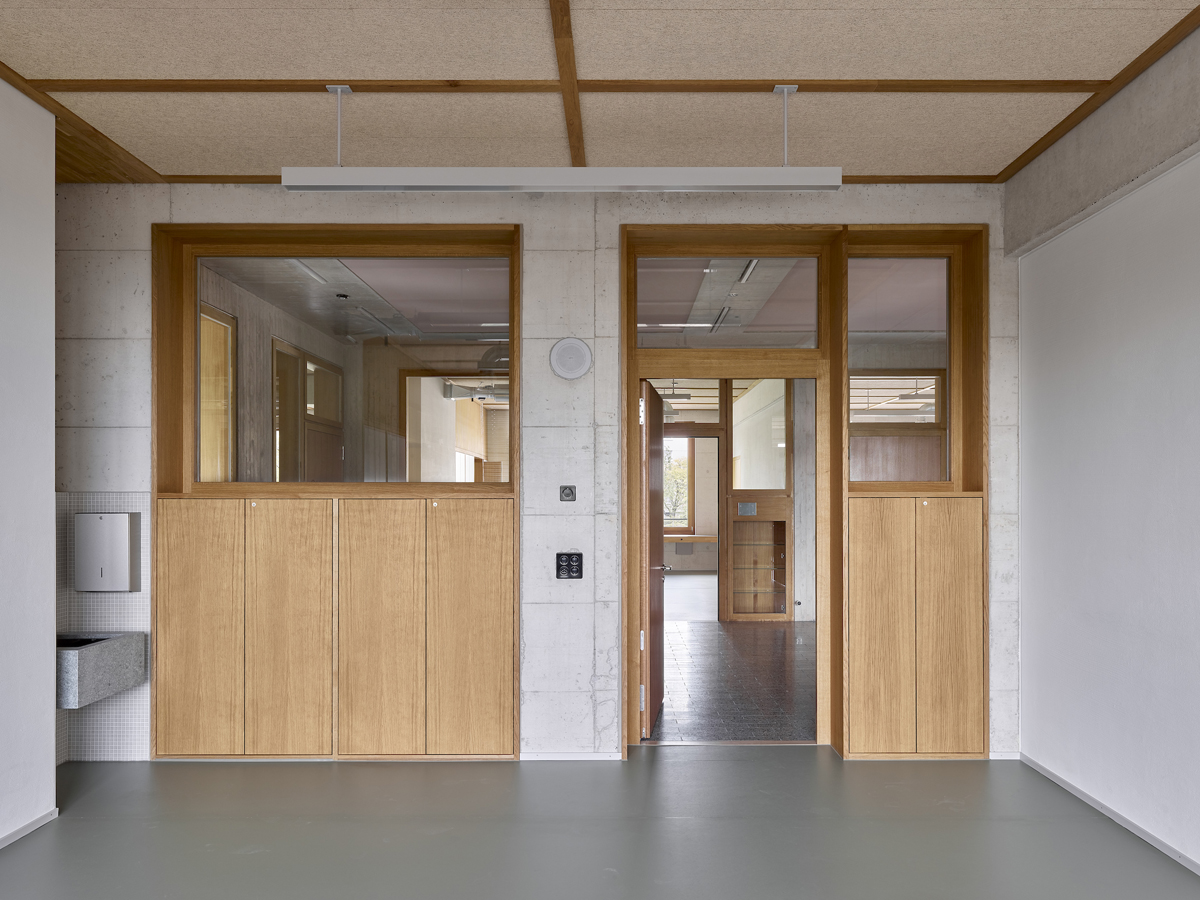 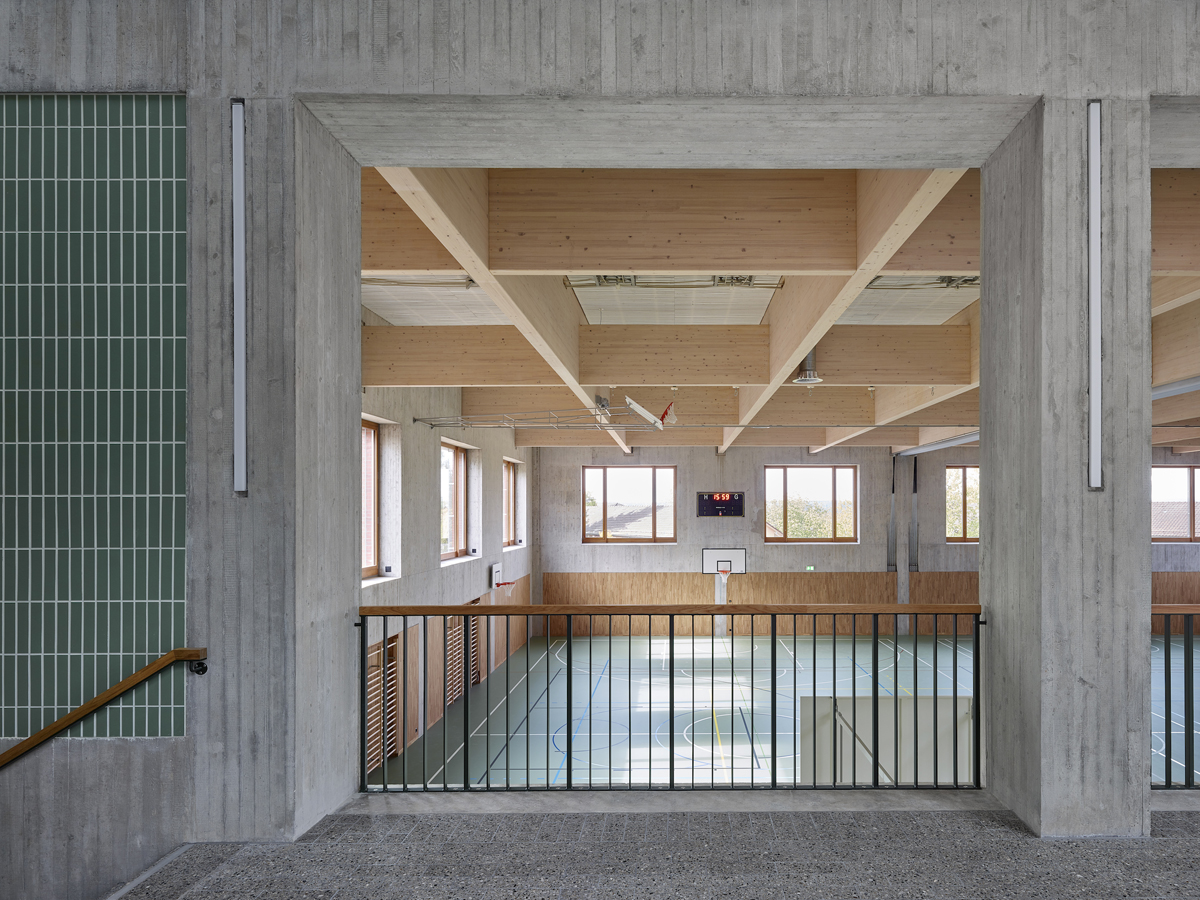 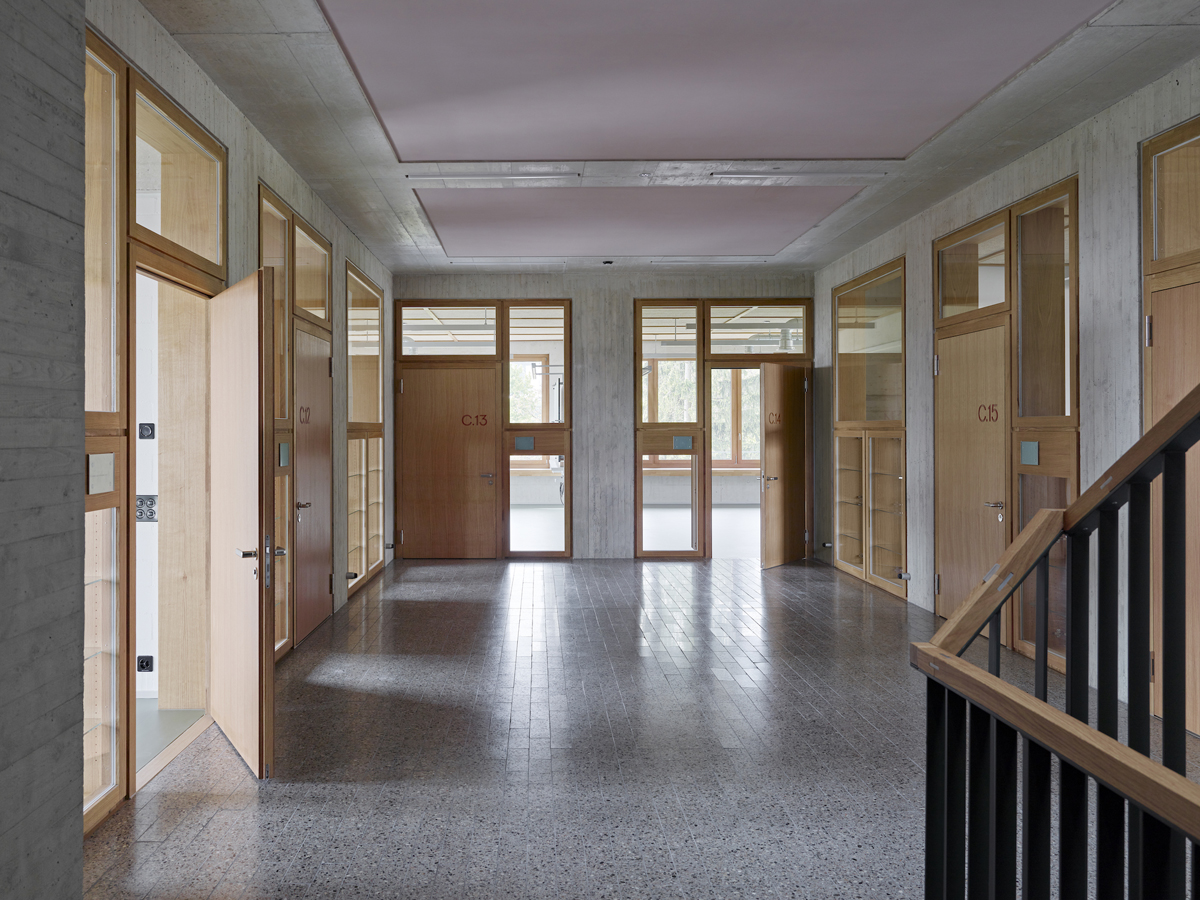 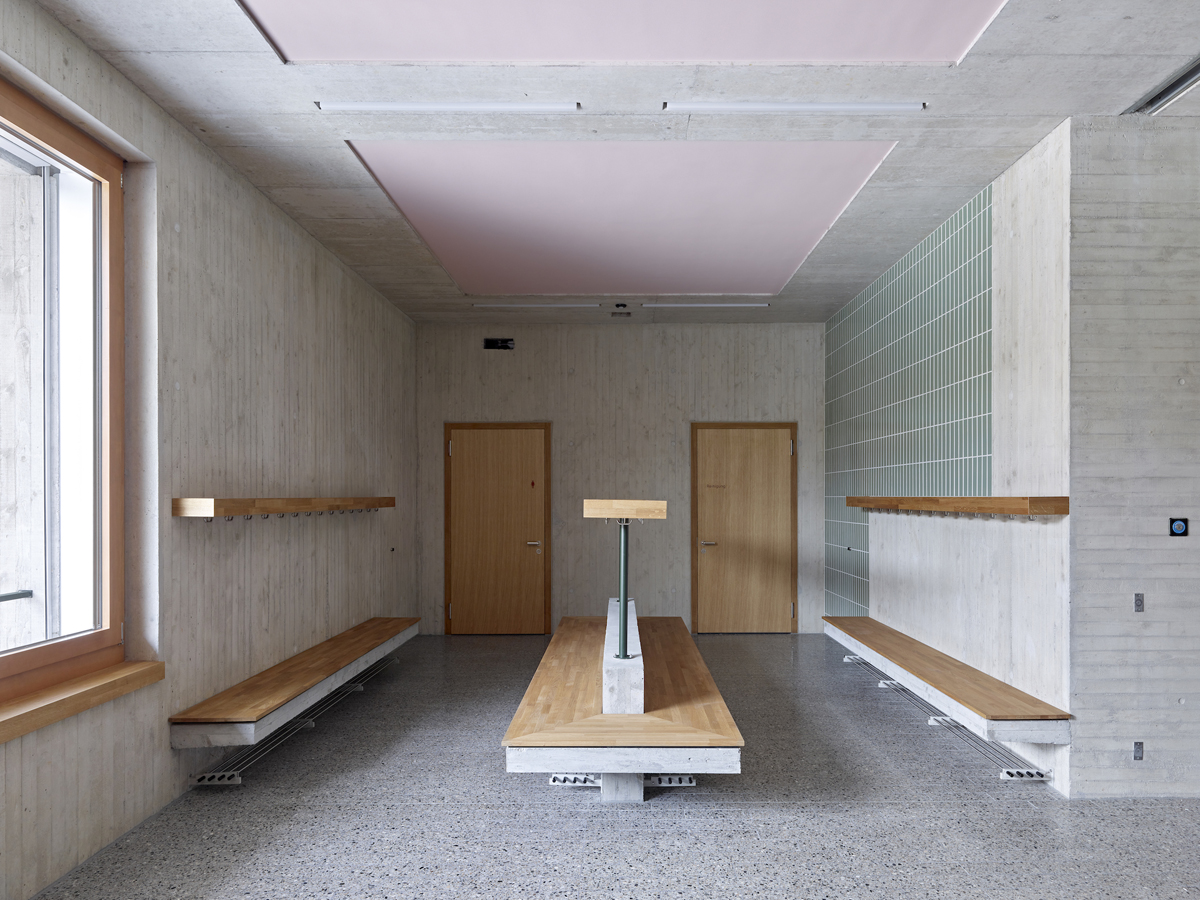 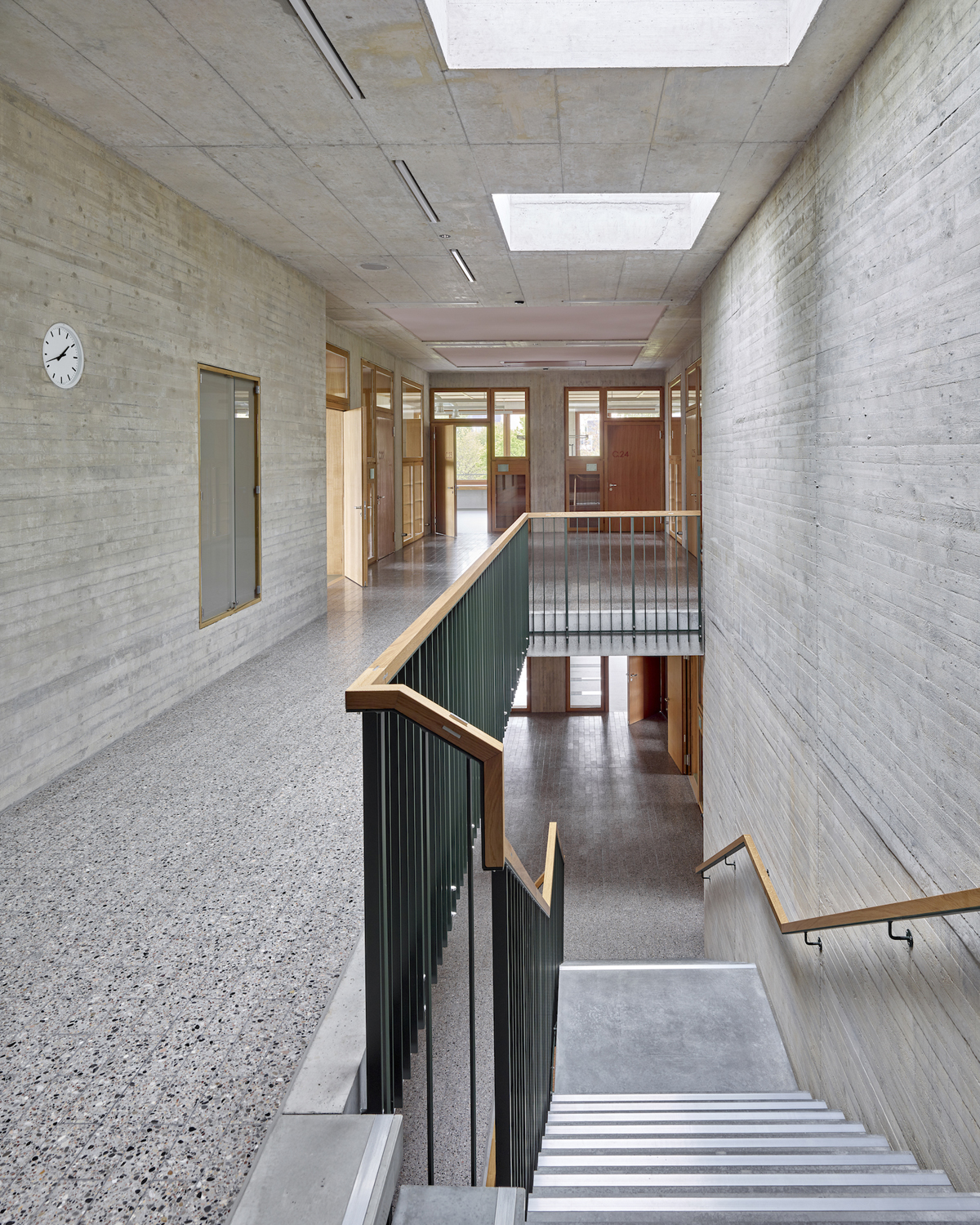 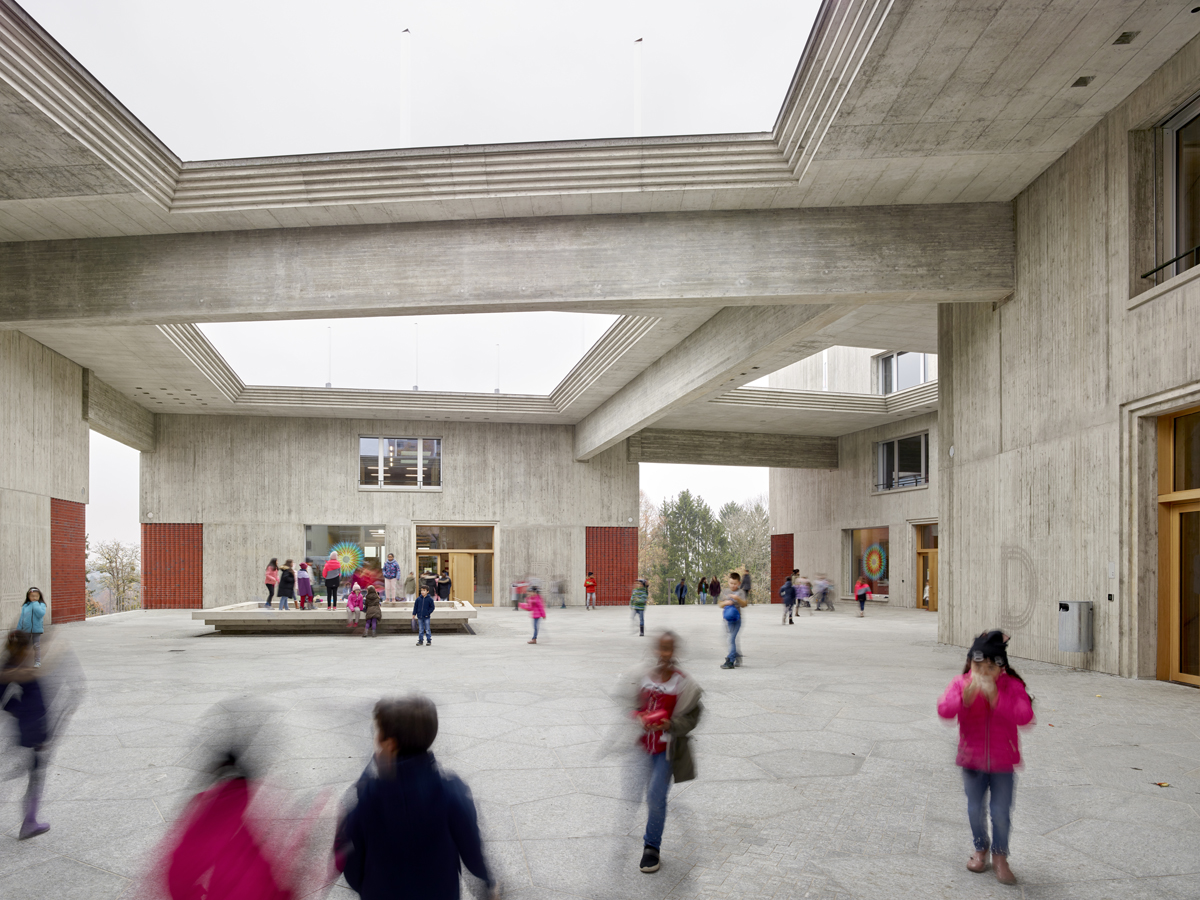 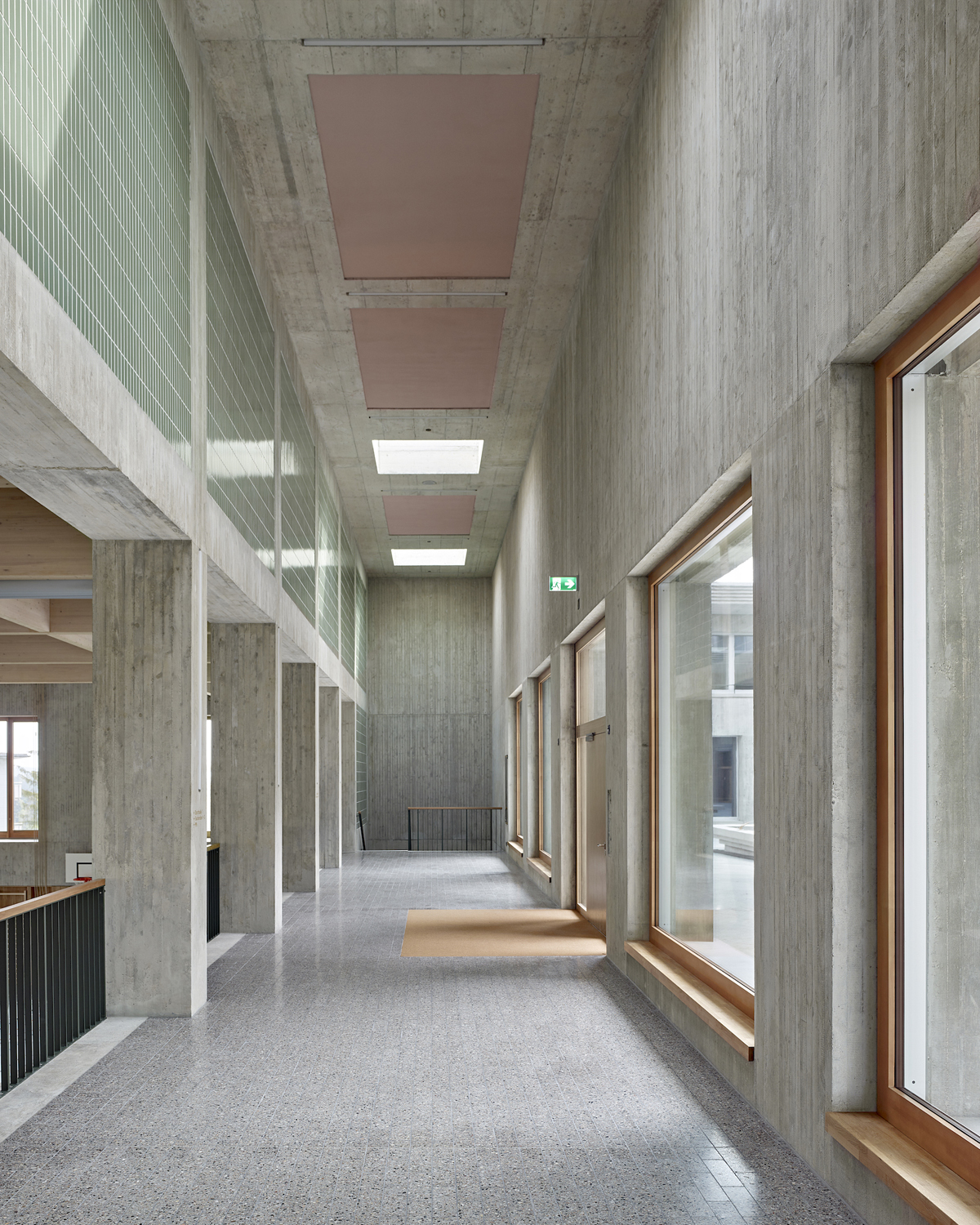 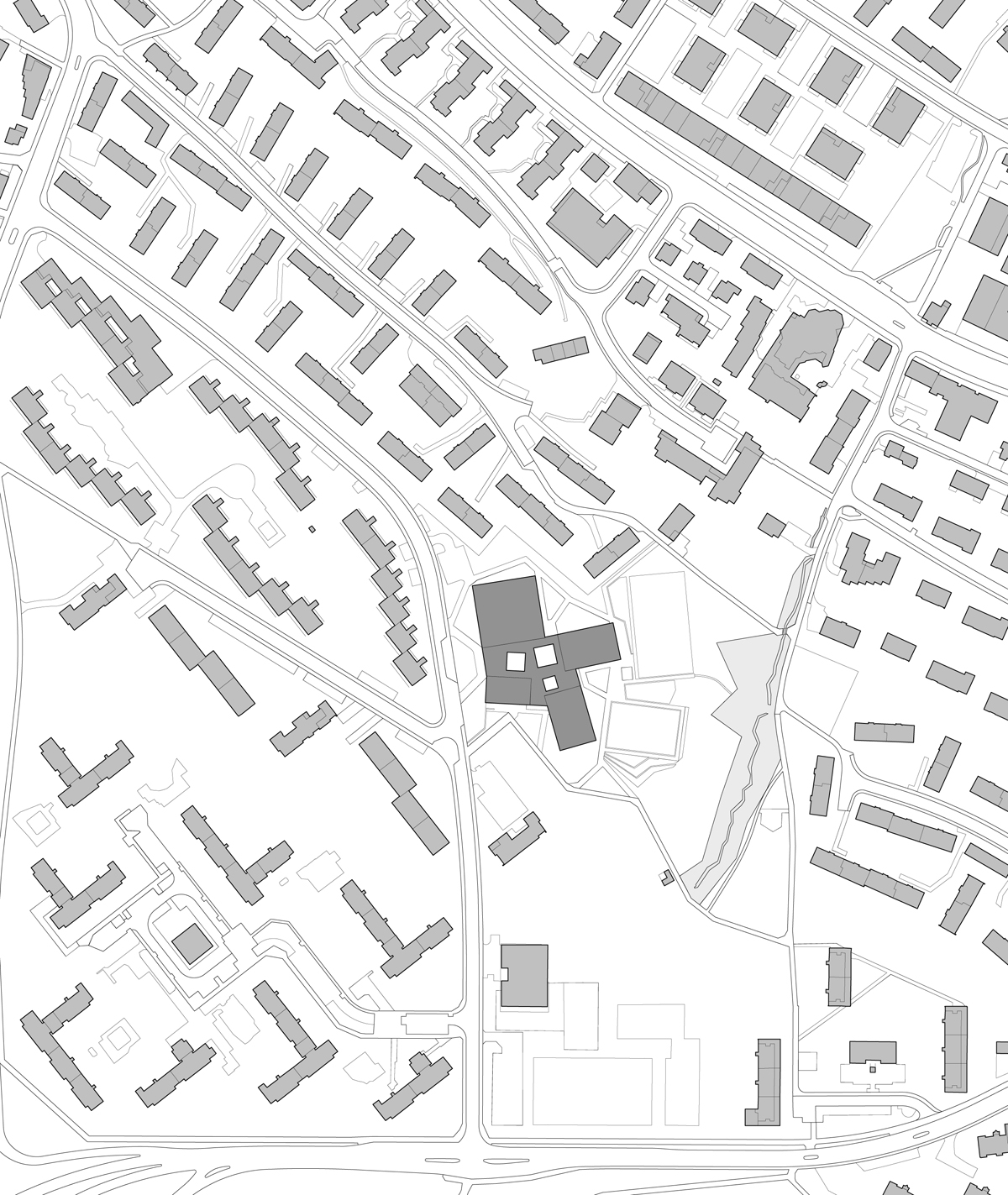 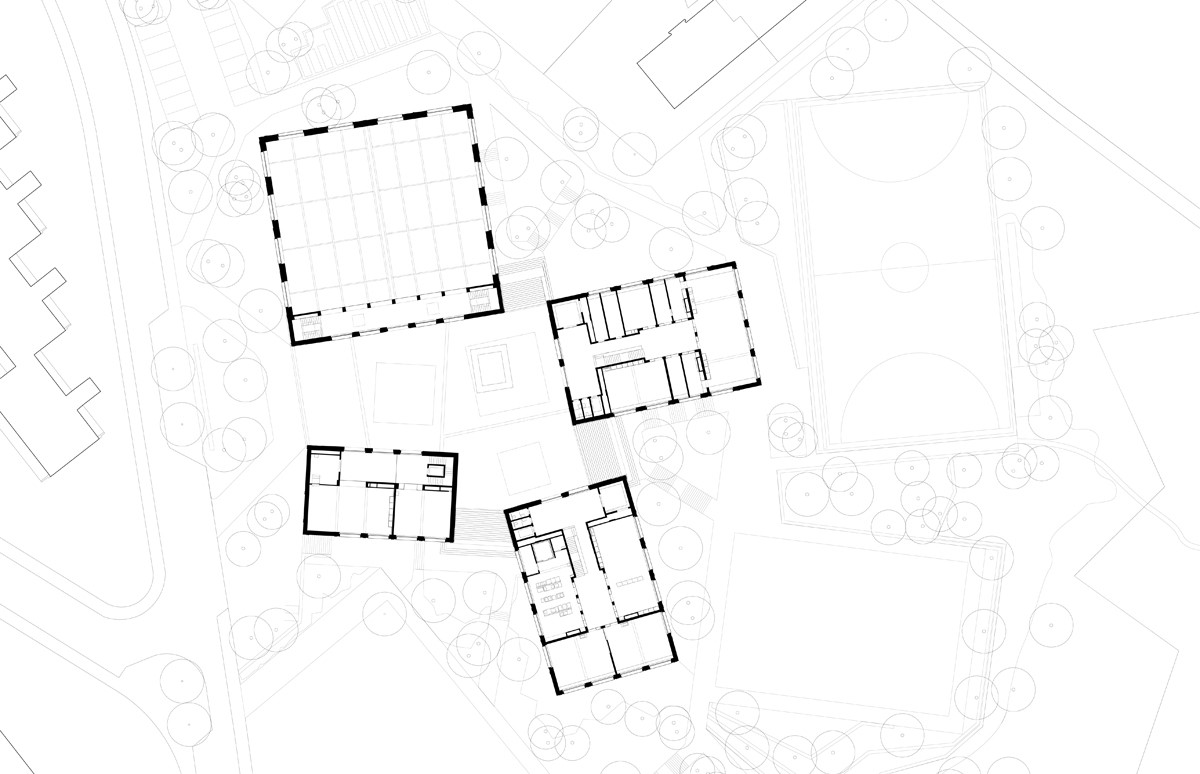 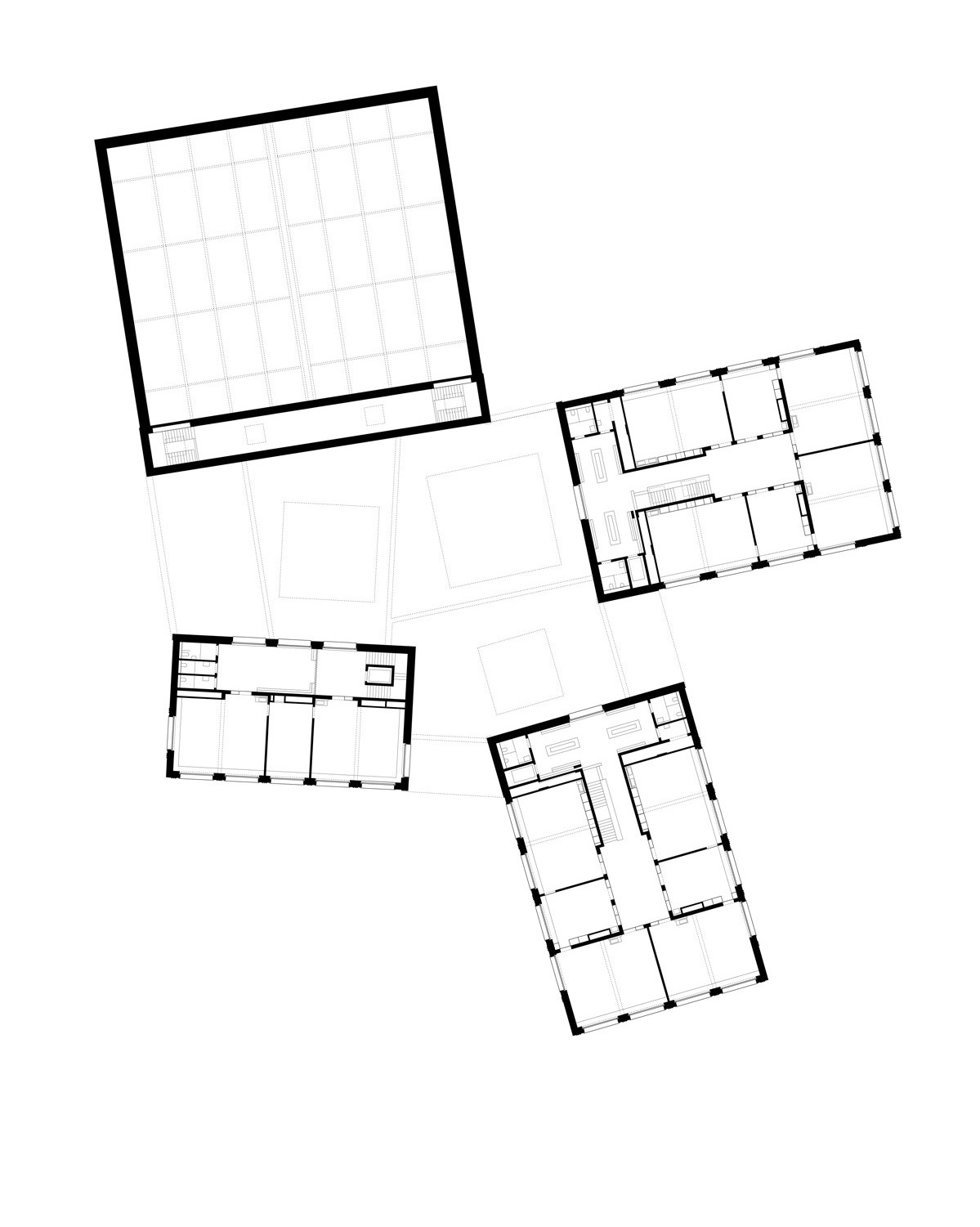 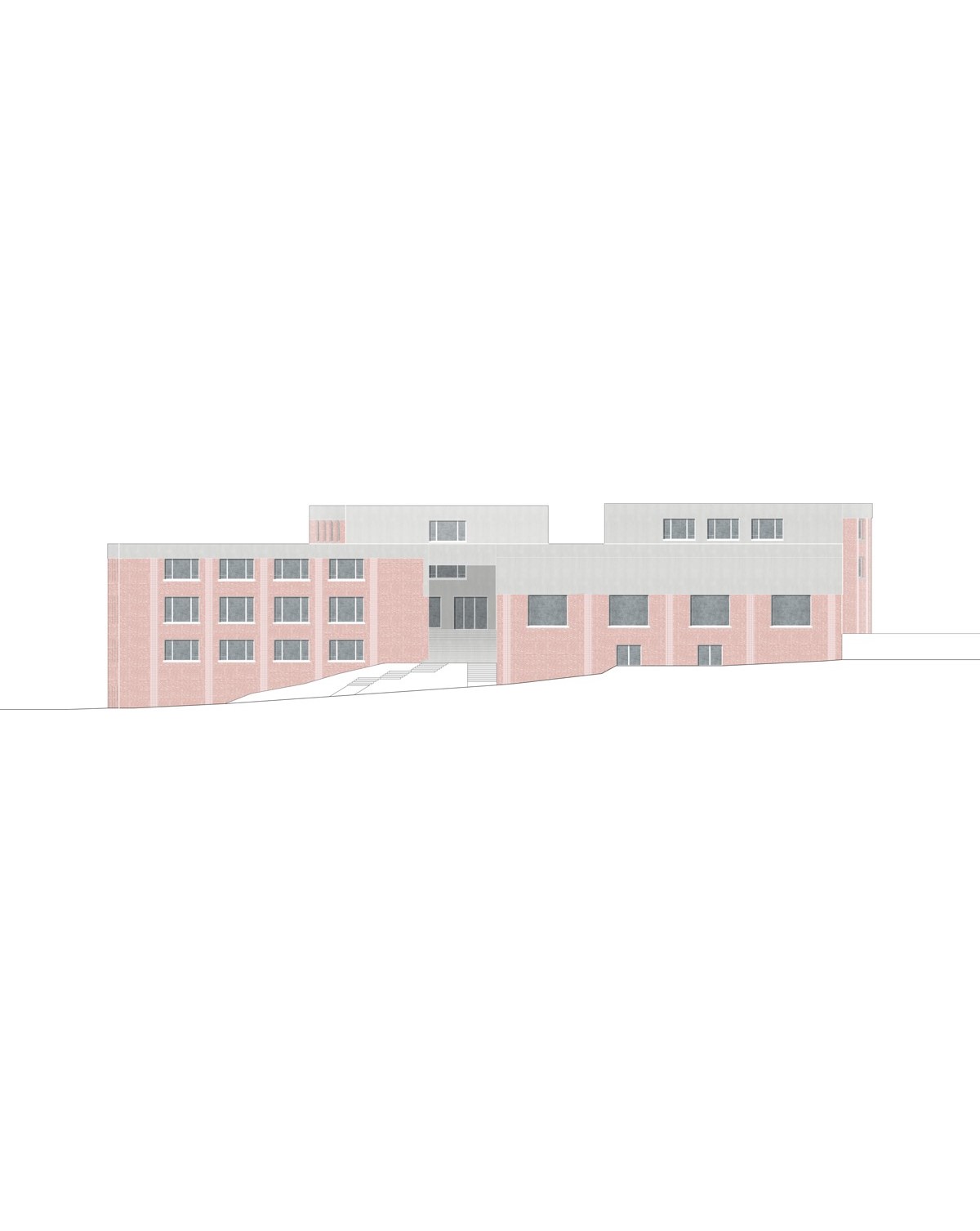 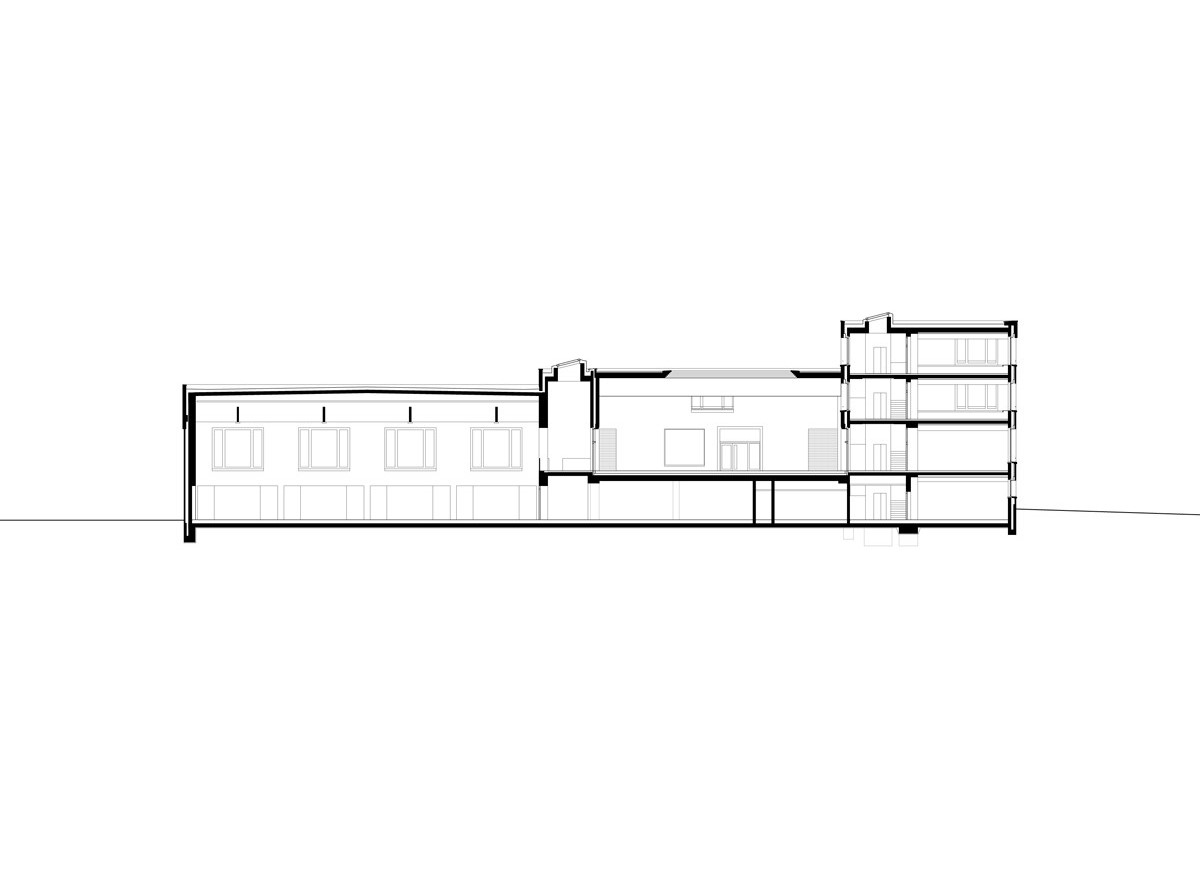