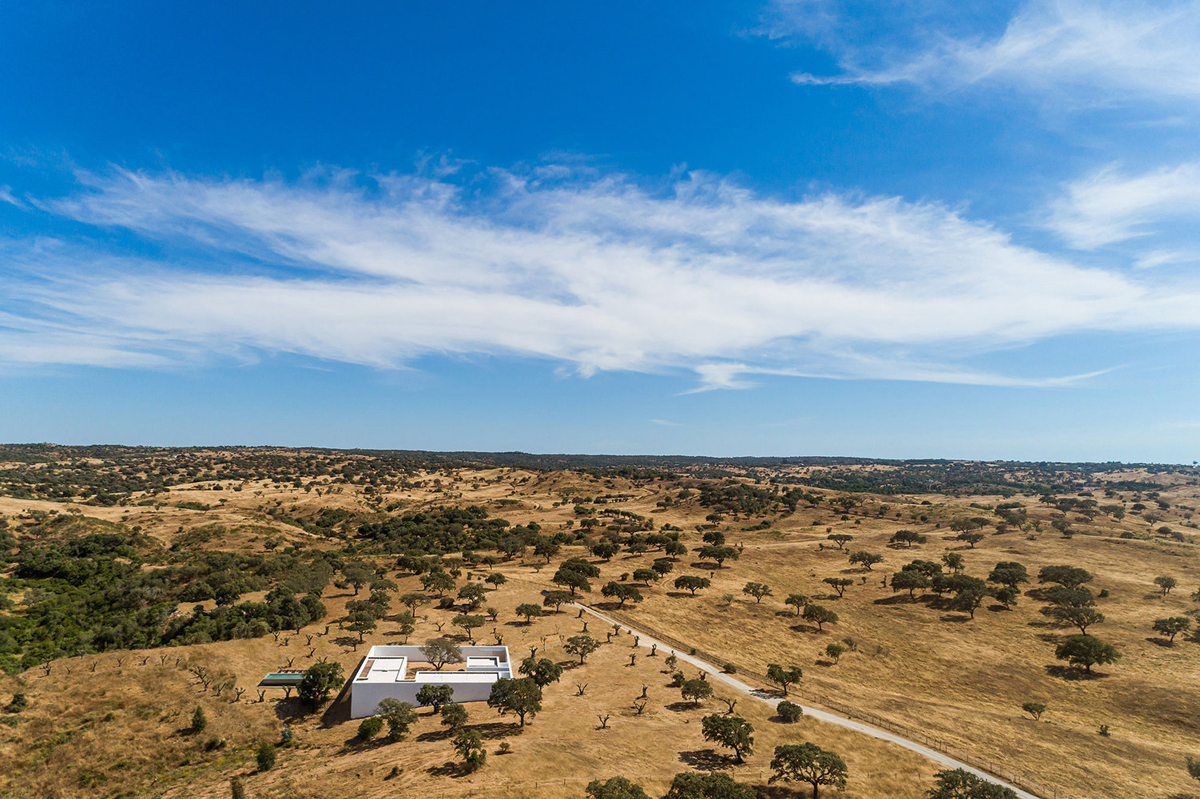 The house is located in the Southwest of Alentejo, deep in the Grandola hills. The gently undulating topography contrasts with the harsh dryness of the landscape and its bare vegetation of cork and holm oaks with sparse bushes creeping from the calcareous soil.
Given its remoteness and isolation, the house echoes the tradition of the Portuguese alcáçova, —or qasbah, following its Arab etymology—, which functioned as a defensive citadel, or compound, with its constructions built within and protected by a high-walled perimeter. Poetically, it summons the Heideggerian notion of “bounded space”, of the human need to define a place of dwelling amidst the endlessness of the landscape. In fact, this typology of a fortified farm is the dominant form of occupation across the Maghreb and the Mediterranean, from Roman antiquity and Arab settlements, to Fernand Pouillon’s and Le Corbusier’s excursus in Argel.
The house is devised as a walled court, onto which a series of inner volumes are set against. The positioning of this court in the landscape was actually constrained by a regulatory distancing from the property limits. Sited on a valley line, it appears half sunk from the Southeast corner, progressively revealing itself towards Northeast. Other than a corner gateway and the small entrance door, the exterior walls barely have openings. An exception is made to the West elevation, as it opens up to a large terrace overlooking the vastness of the landscape and a small creek below.
Inside the courtyard, three rectangular volumes occupy the North, the East and the West elevations, comprising respectively the bedroom suites, the living room and kitchen and the garage-cum-staff bedroom, while the void southwards is formally occupied by an orchard. The common areas function in a classical sequence of unfolding rooms, from the kitchen to the living room and to the library, all of which are separated by symmetrical pocket doors. The dining area is divided from the living room by a large fireplace with a hanging metal chimney. The ceiling is made of structural whitewashed wood beams and boarding with white stuccoed walls and cement floors.
Clad from the outside in a whitewashed stone masonry, the thick walls are capped by an elusive pan tile, suggestive of a pitched roof that in fact does not exist, and an equally calk painted concrete lintel. The roughness of these burnt lime surfaces summons a vernacular and quasi-archaic condition which is nonetheless dismissed by its sheer scale and abstraction. 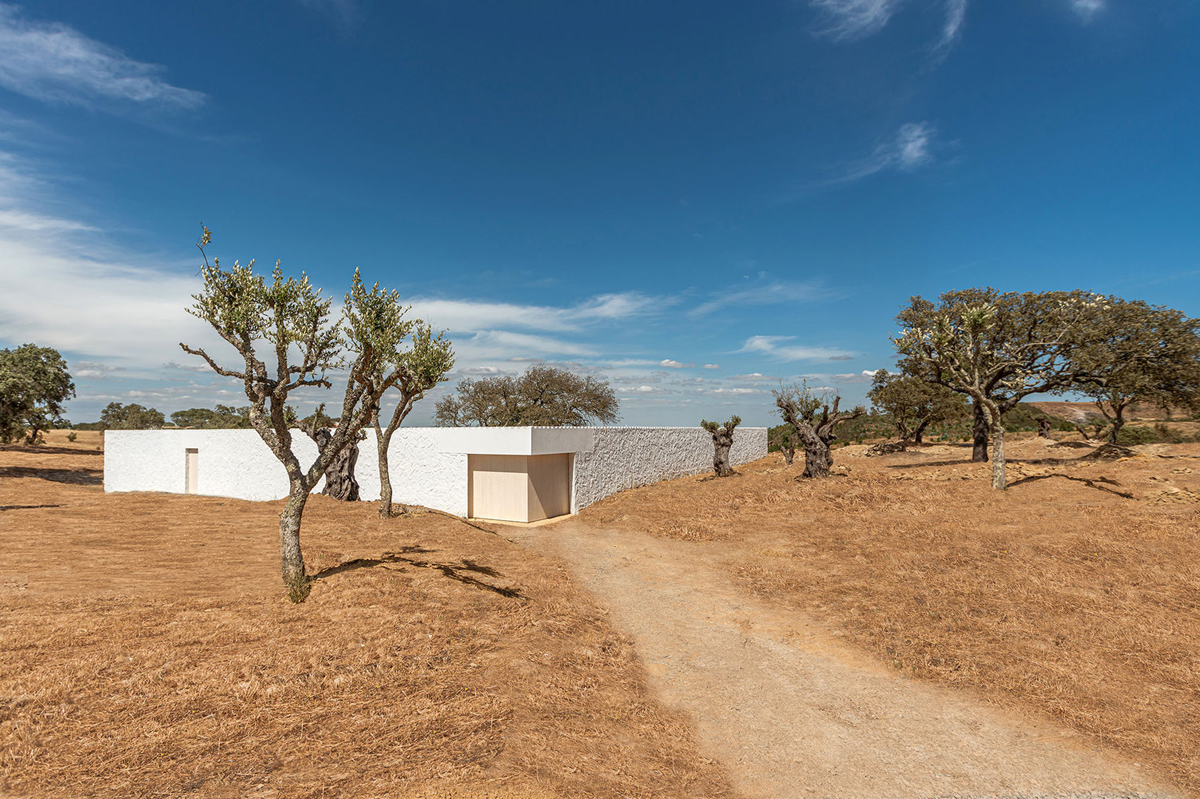 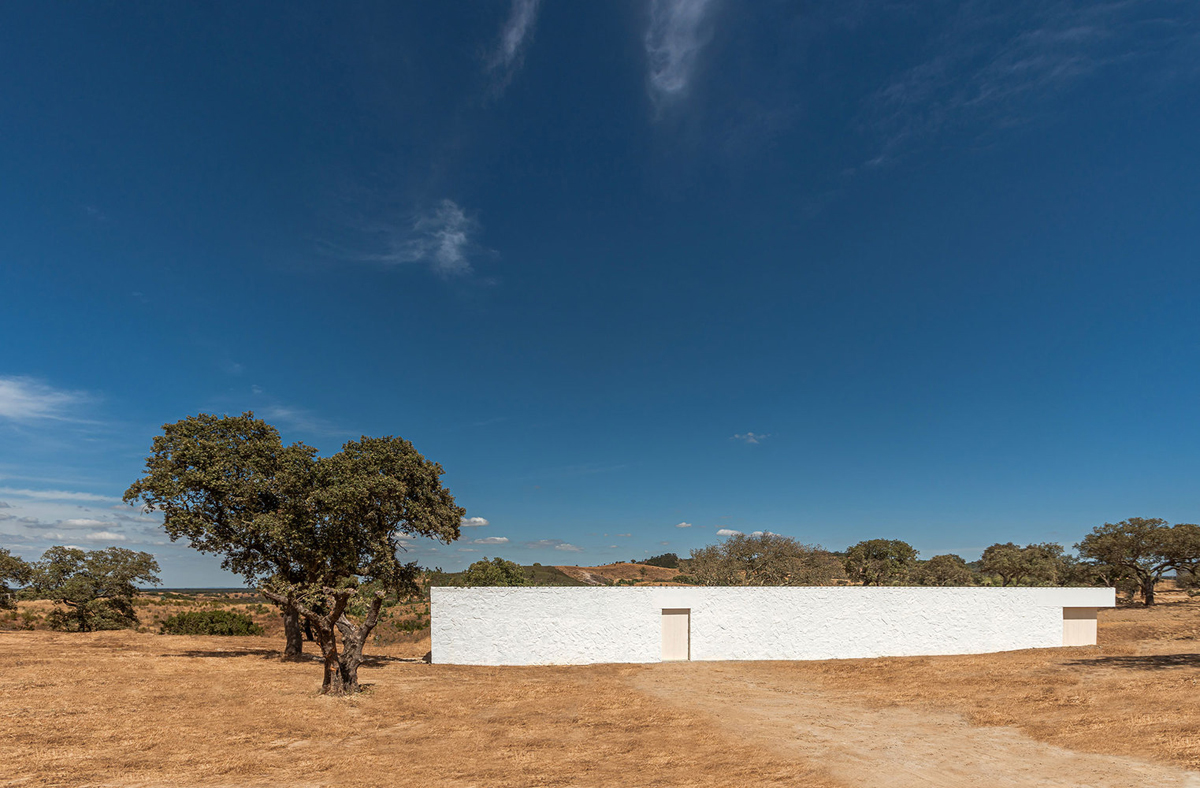 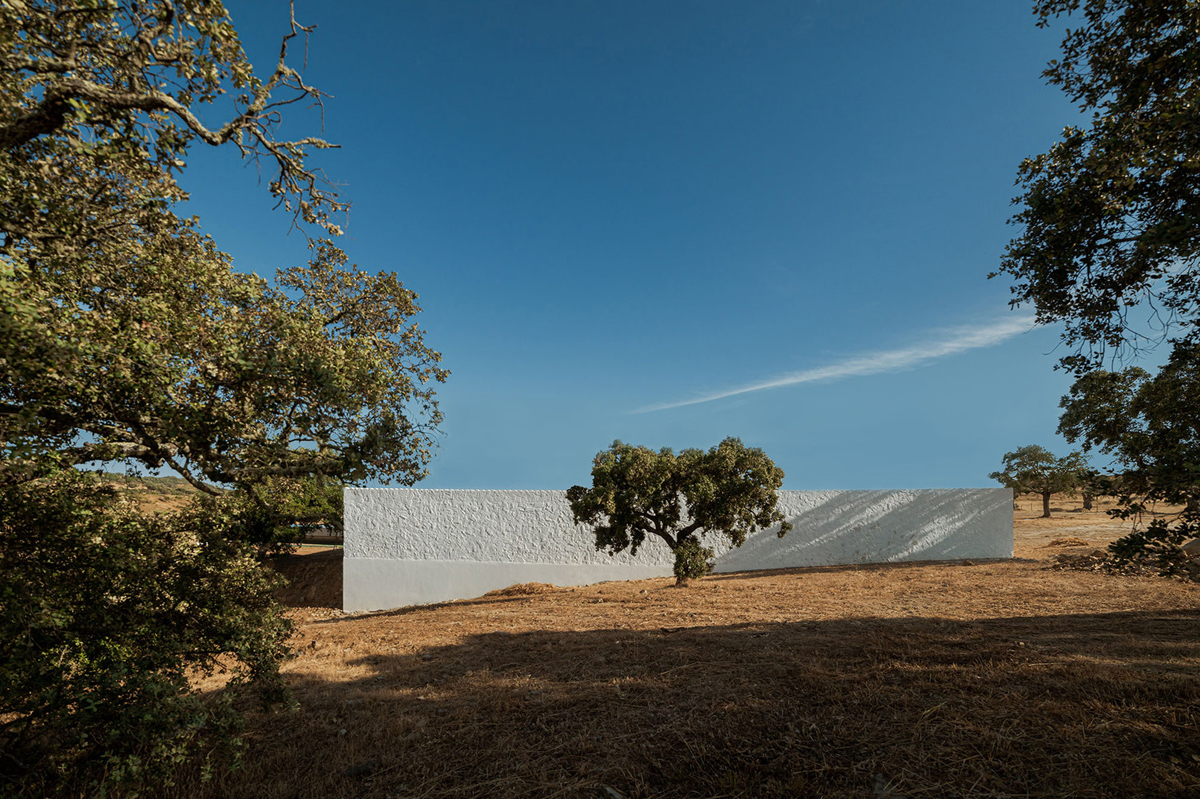 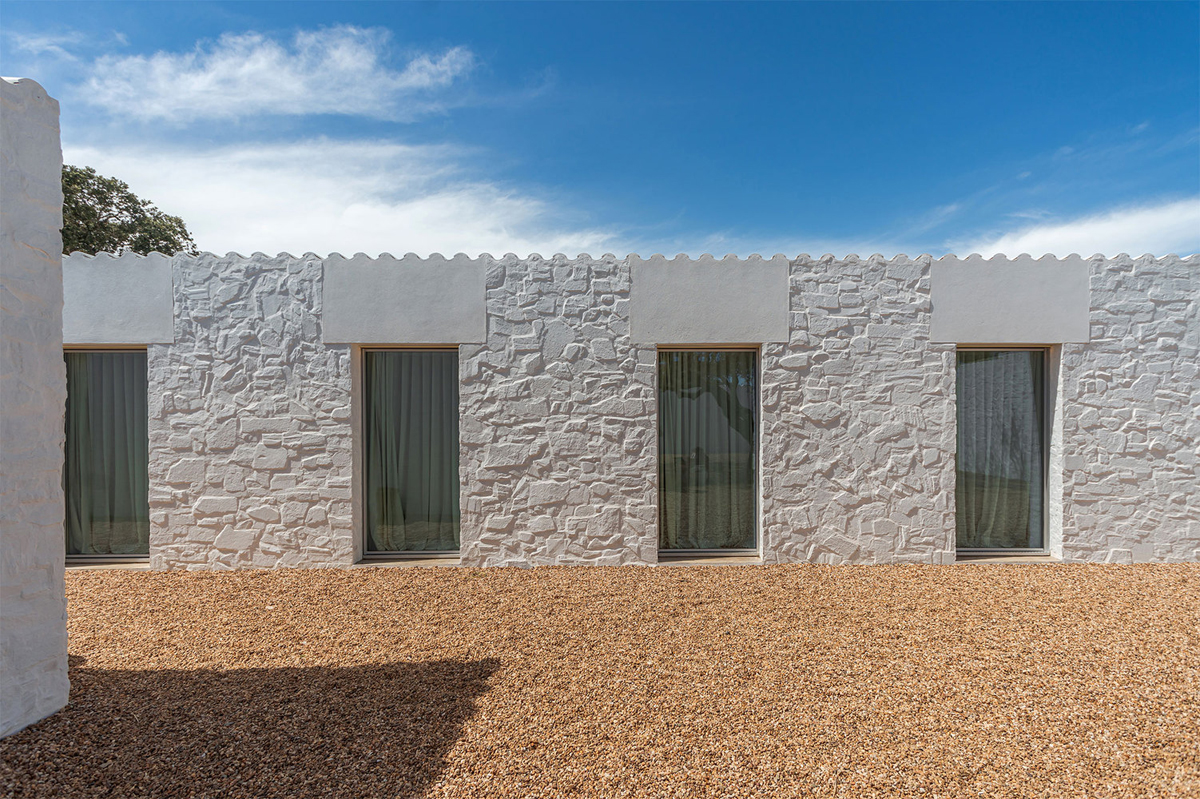 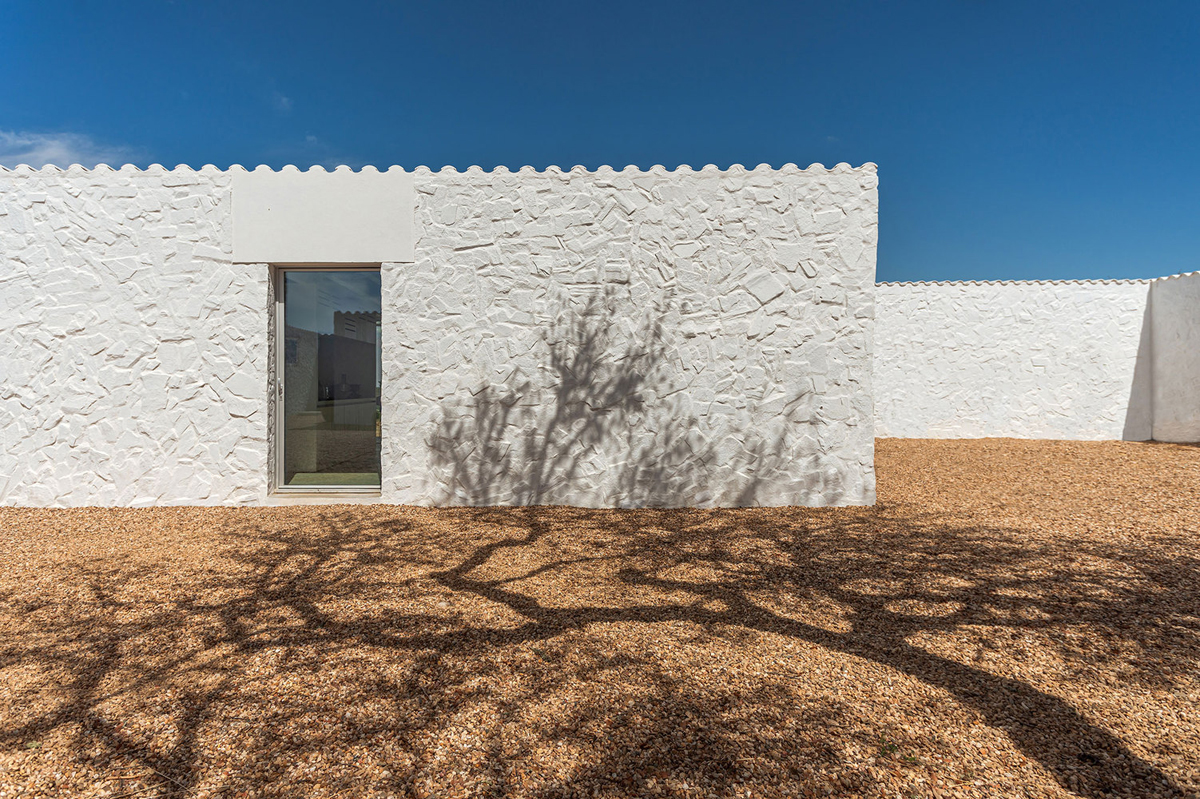 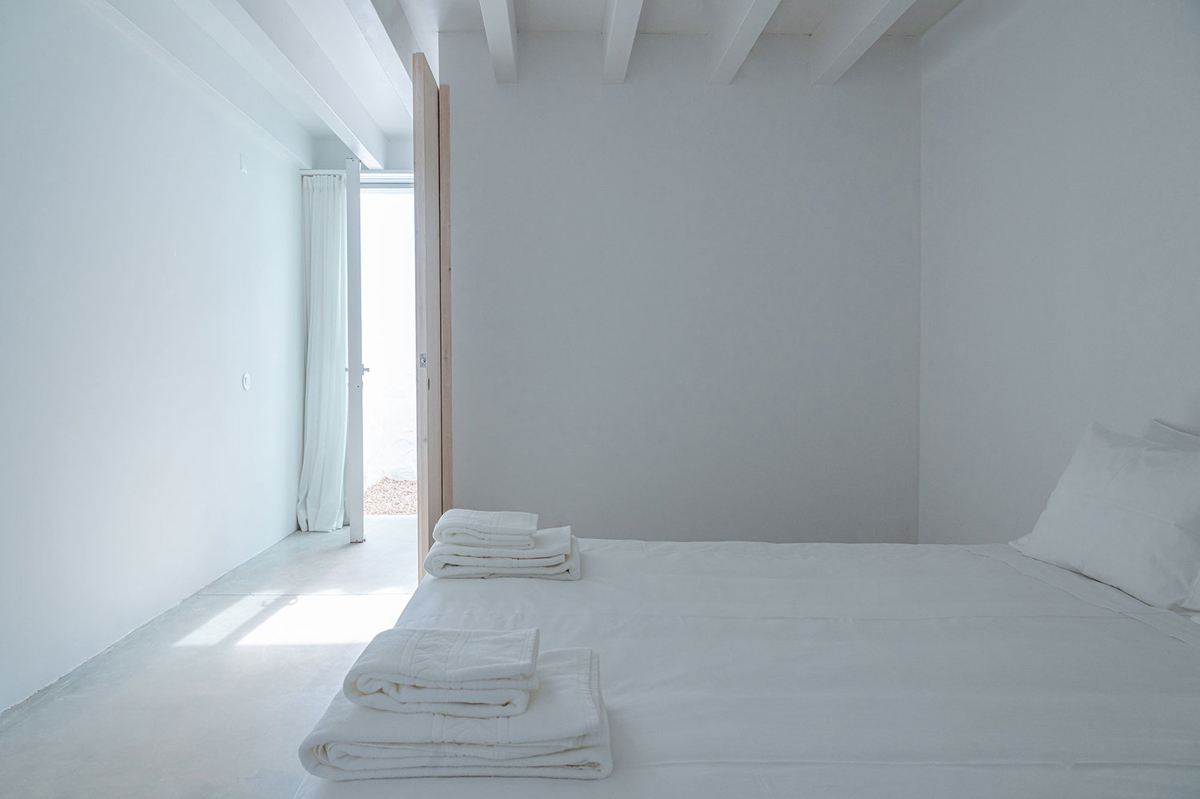 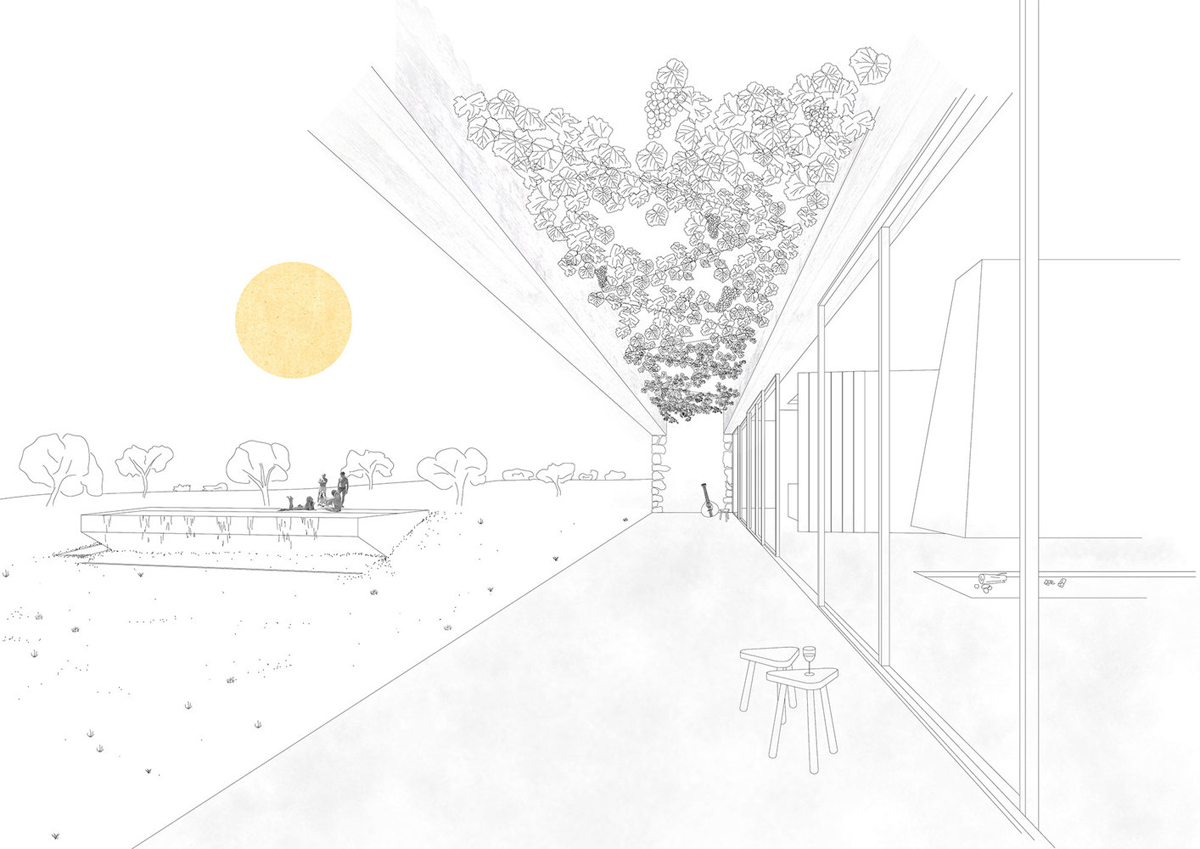 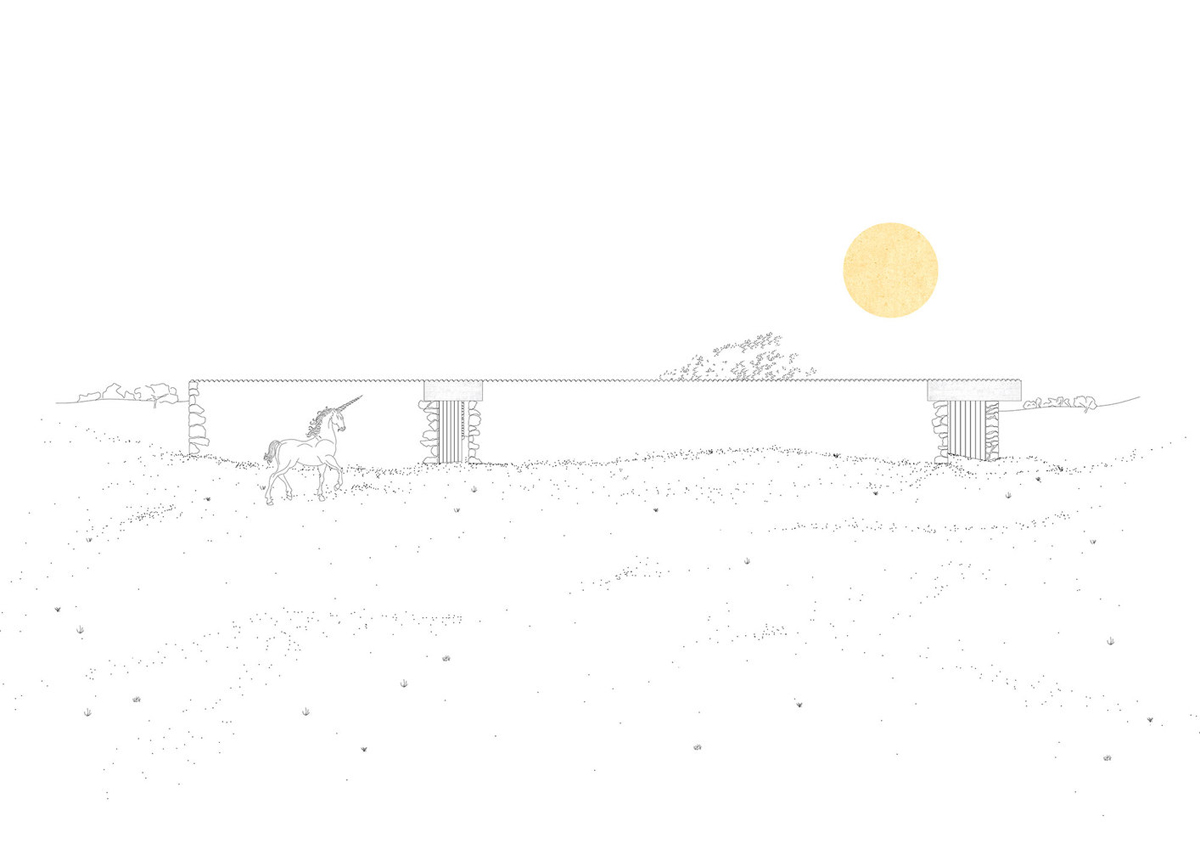 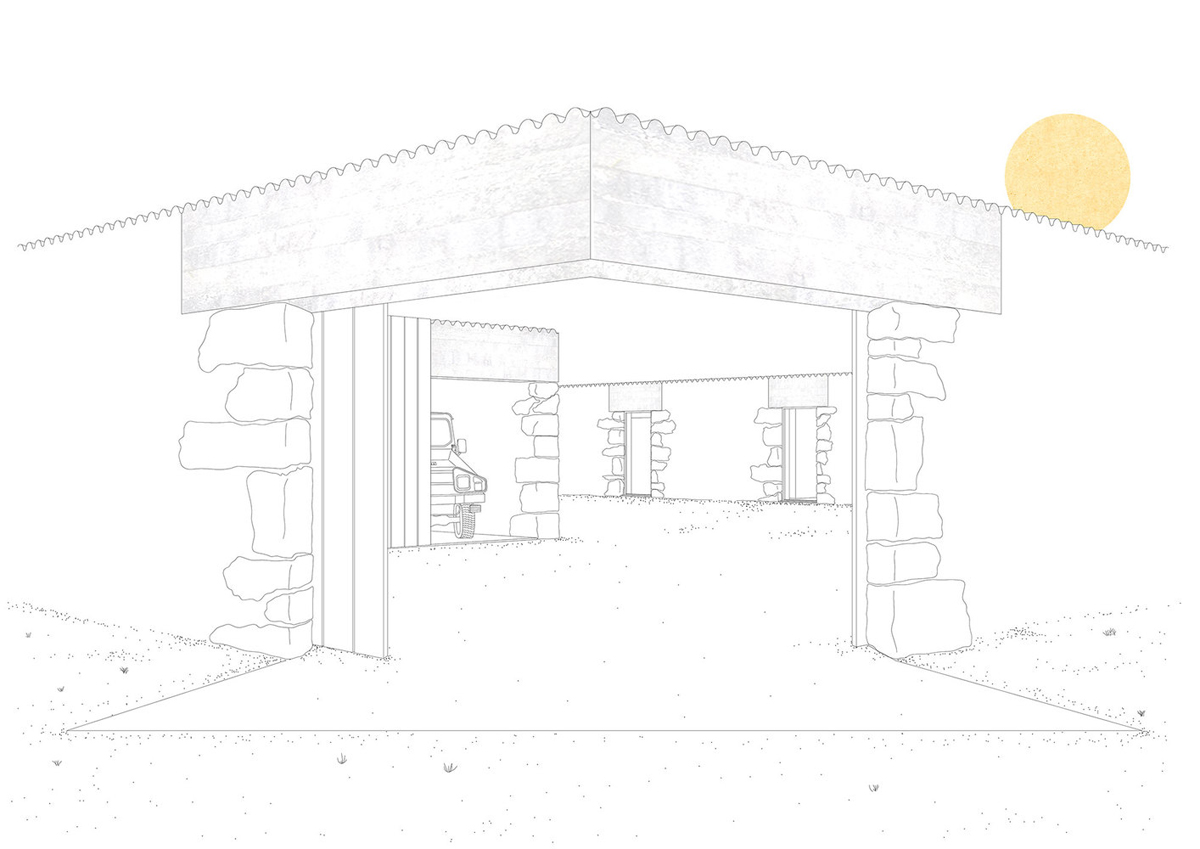 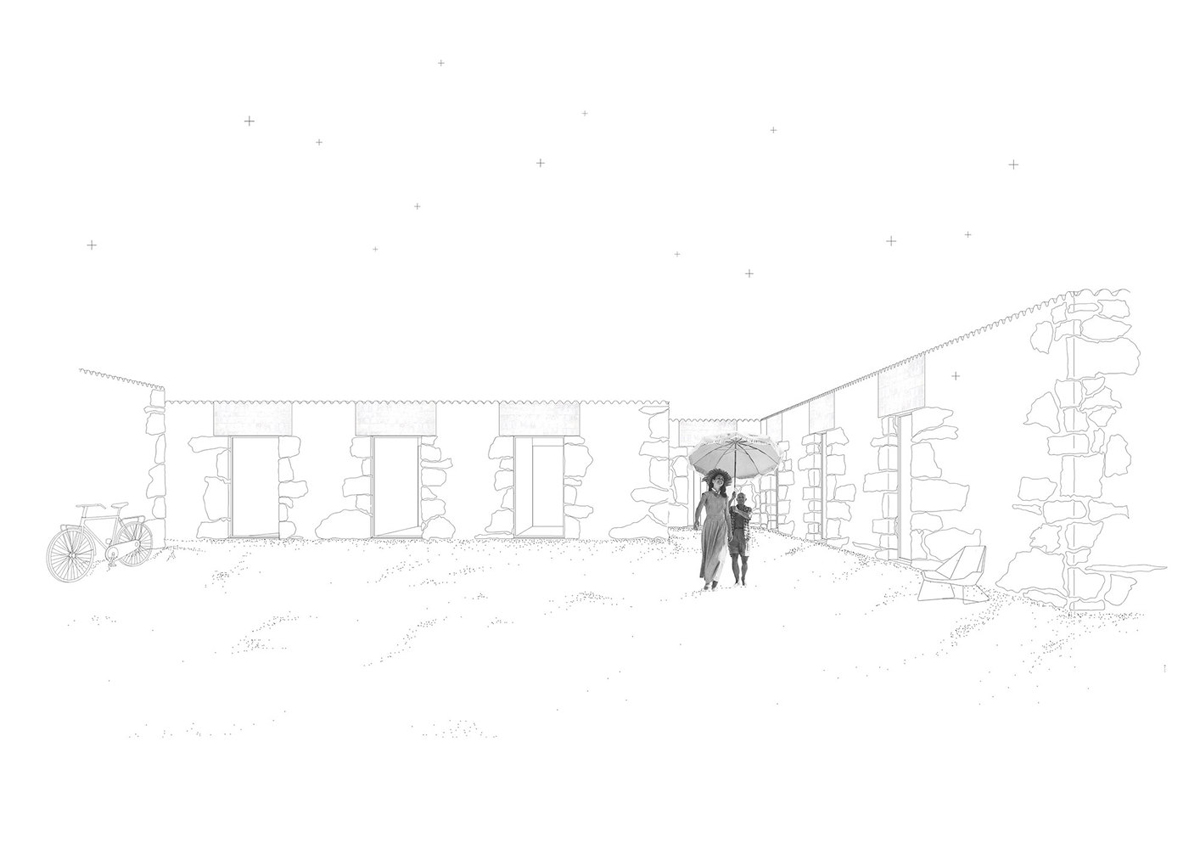 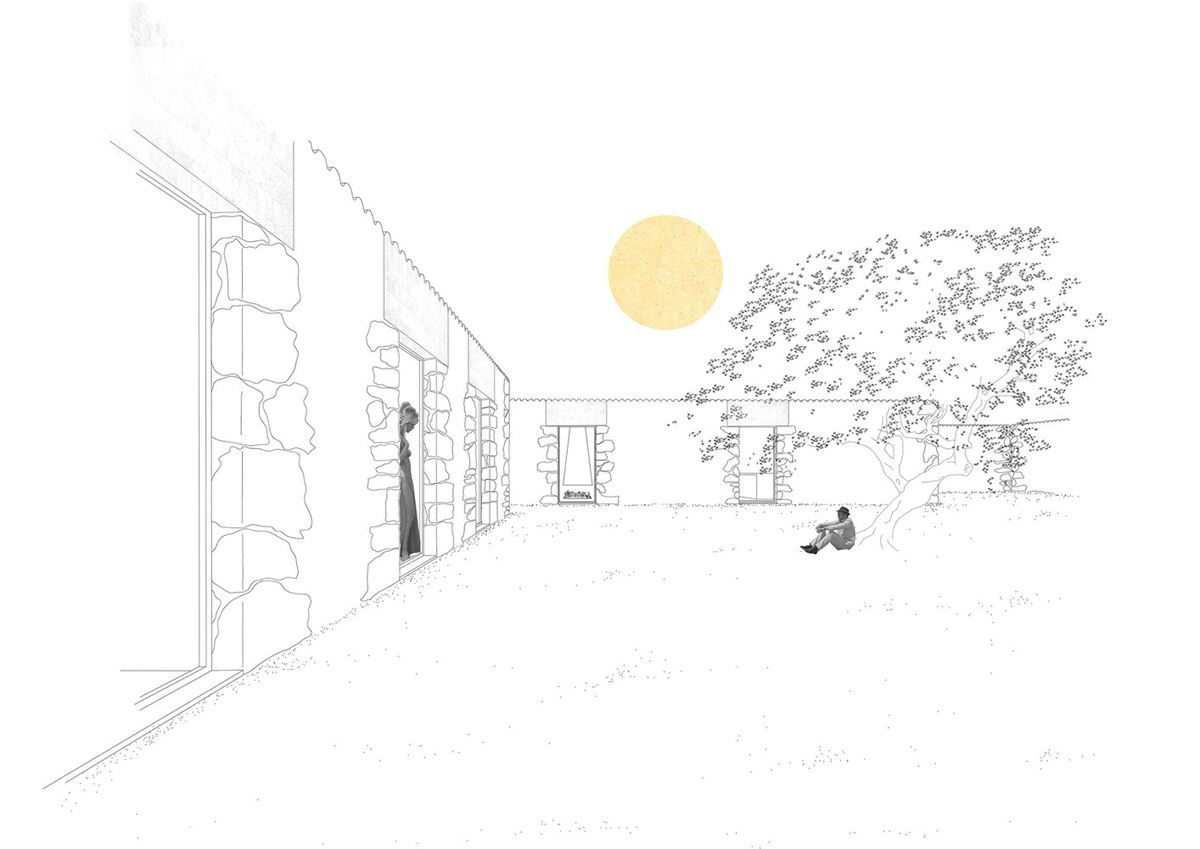 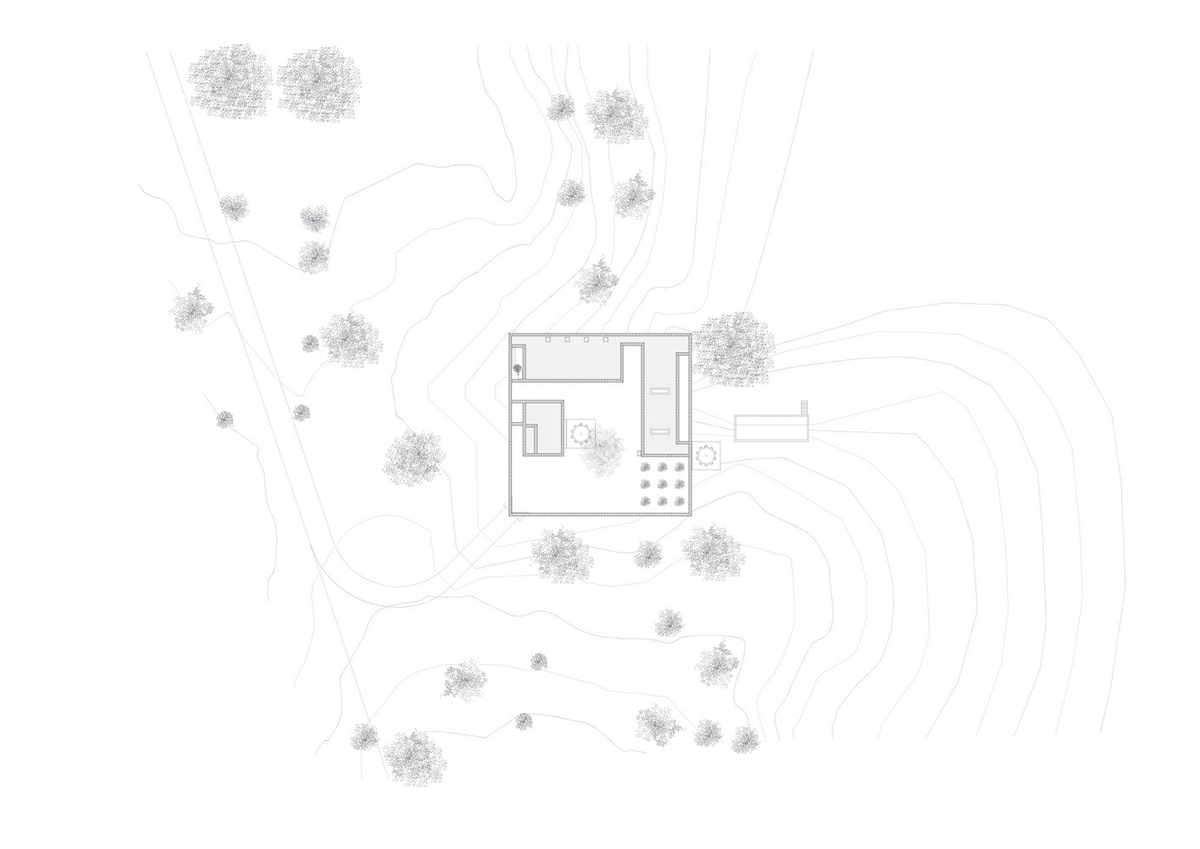 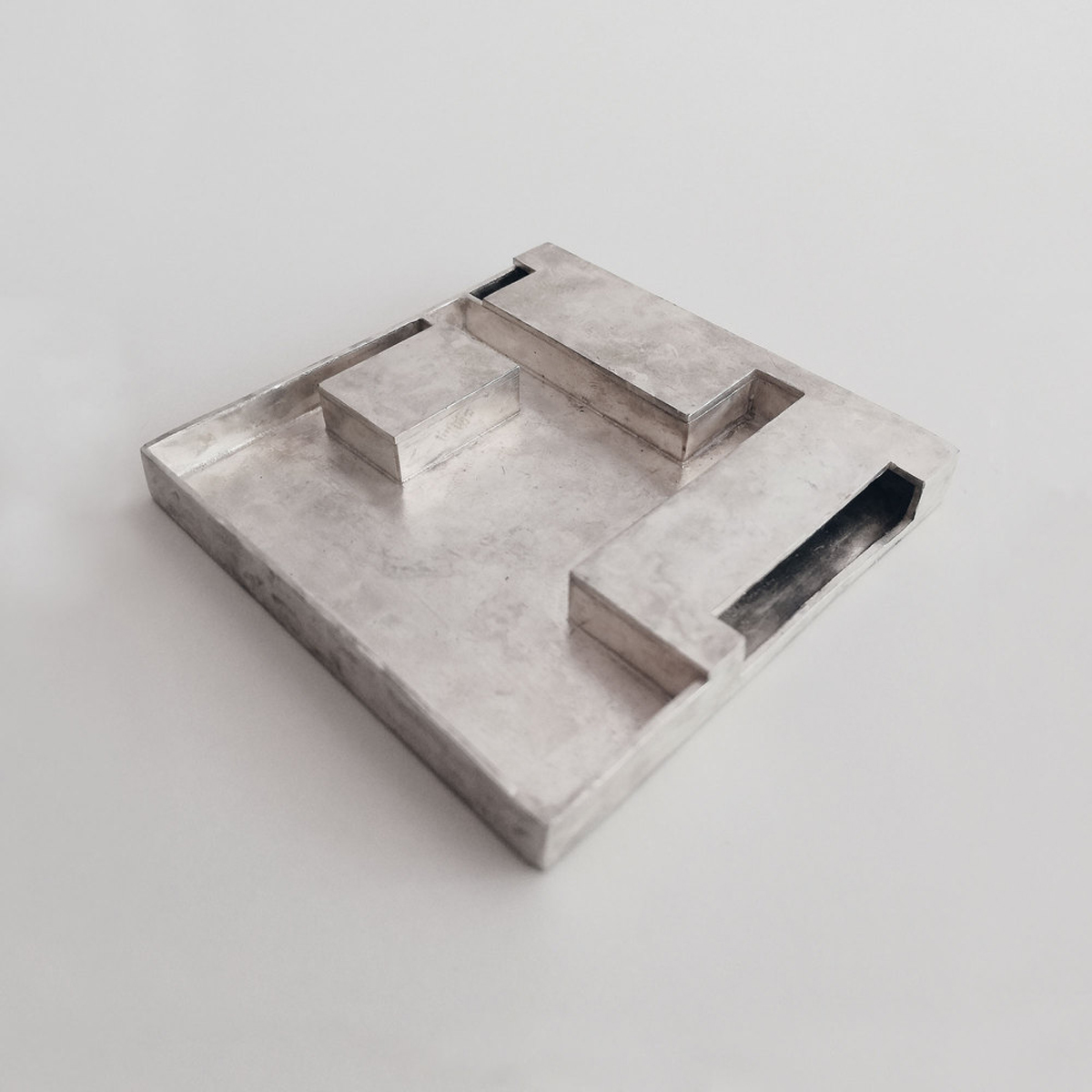 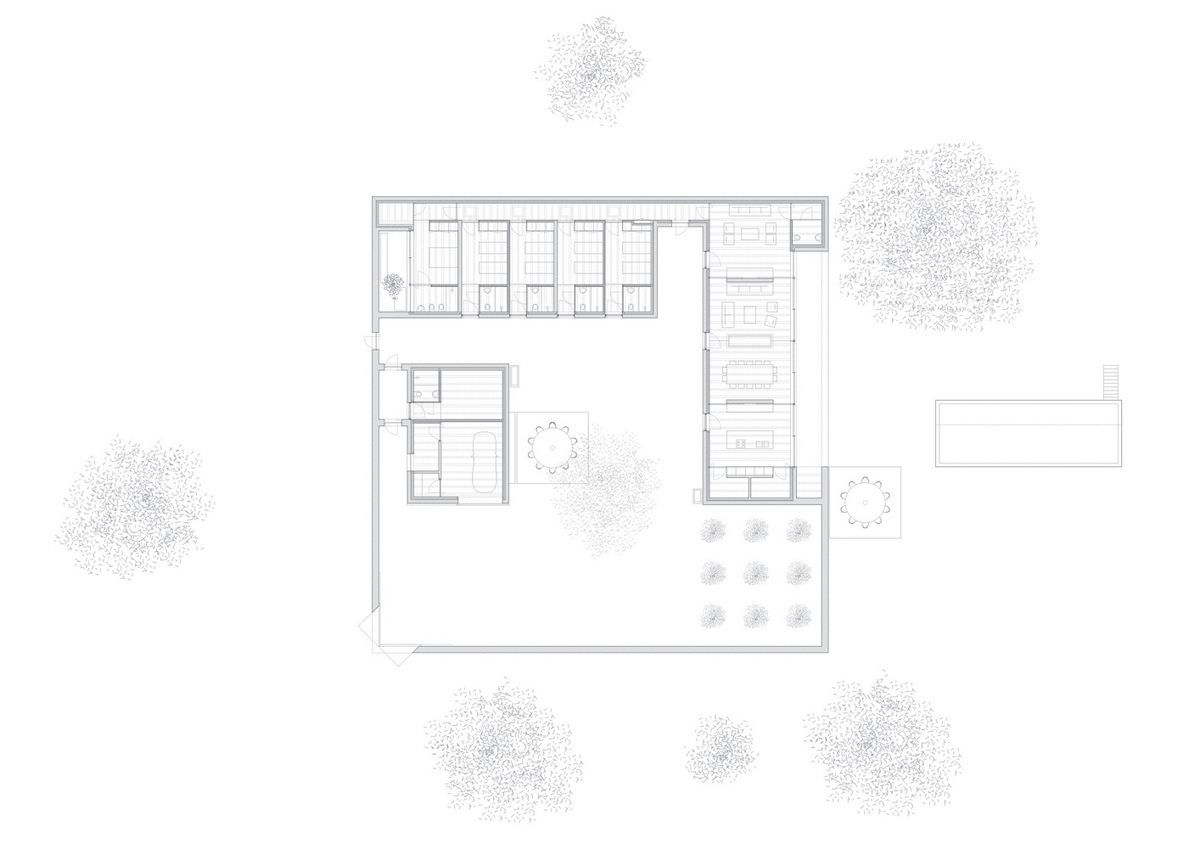 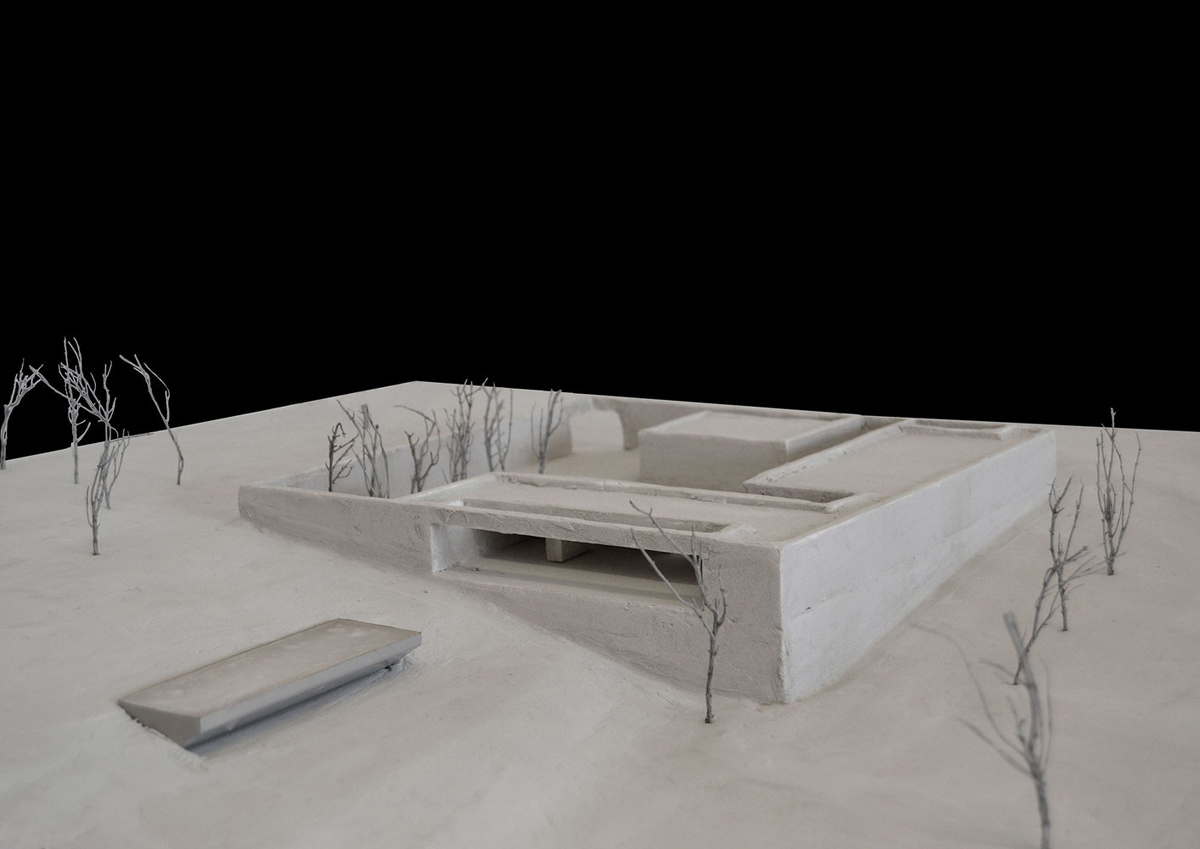 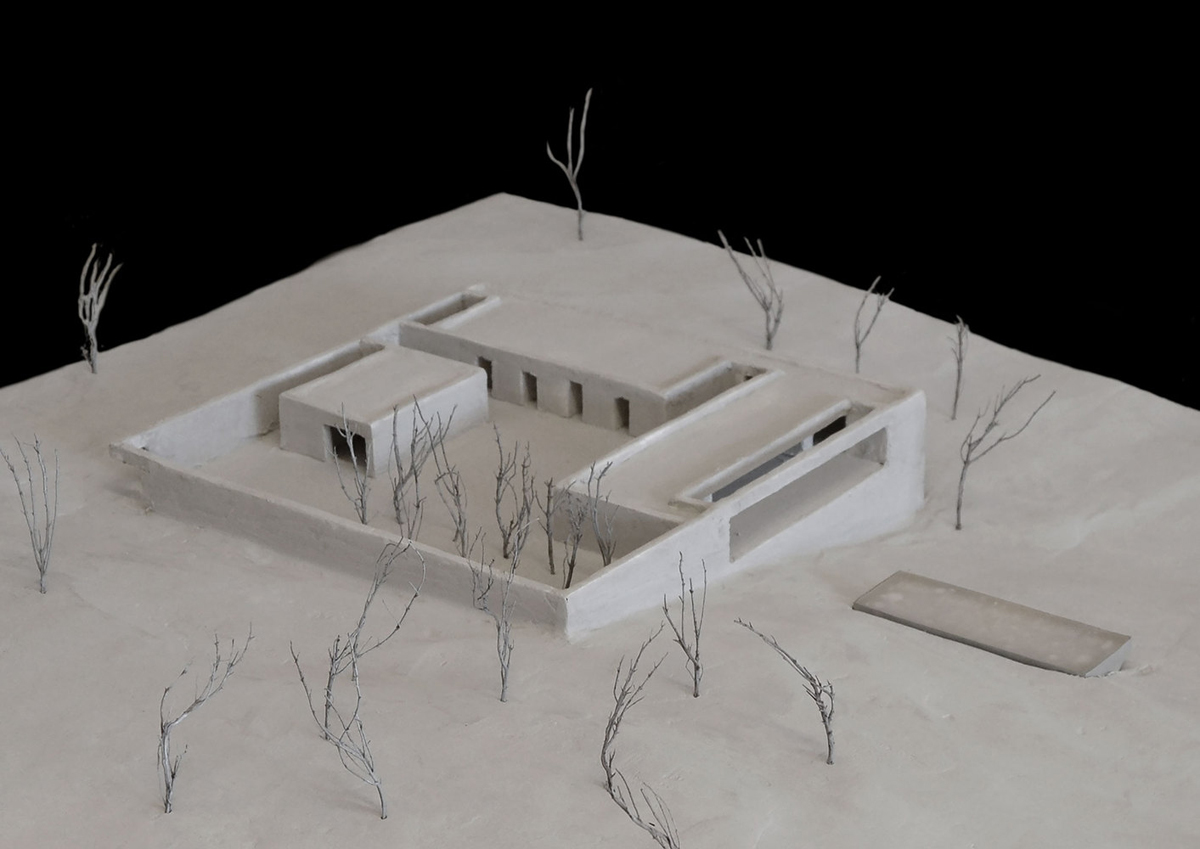 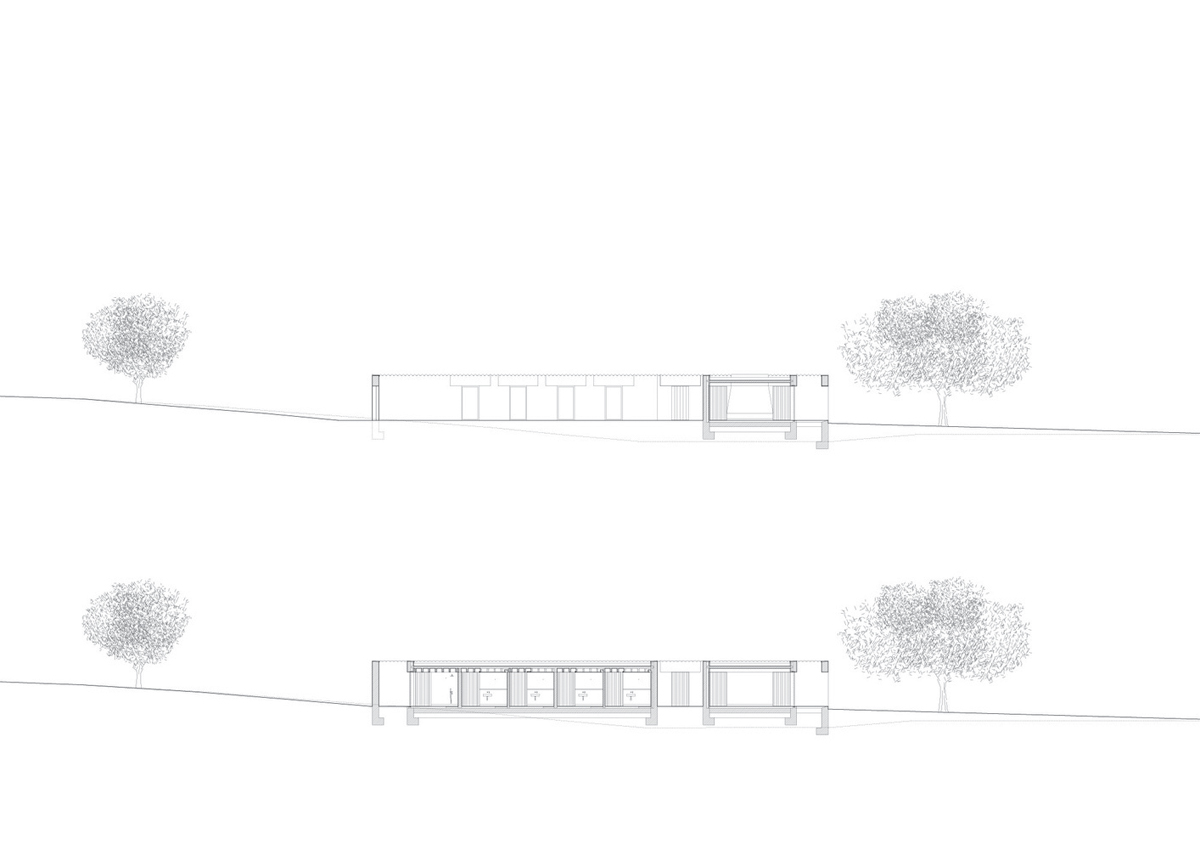 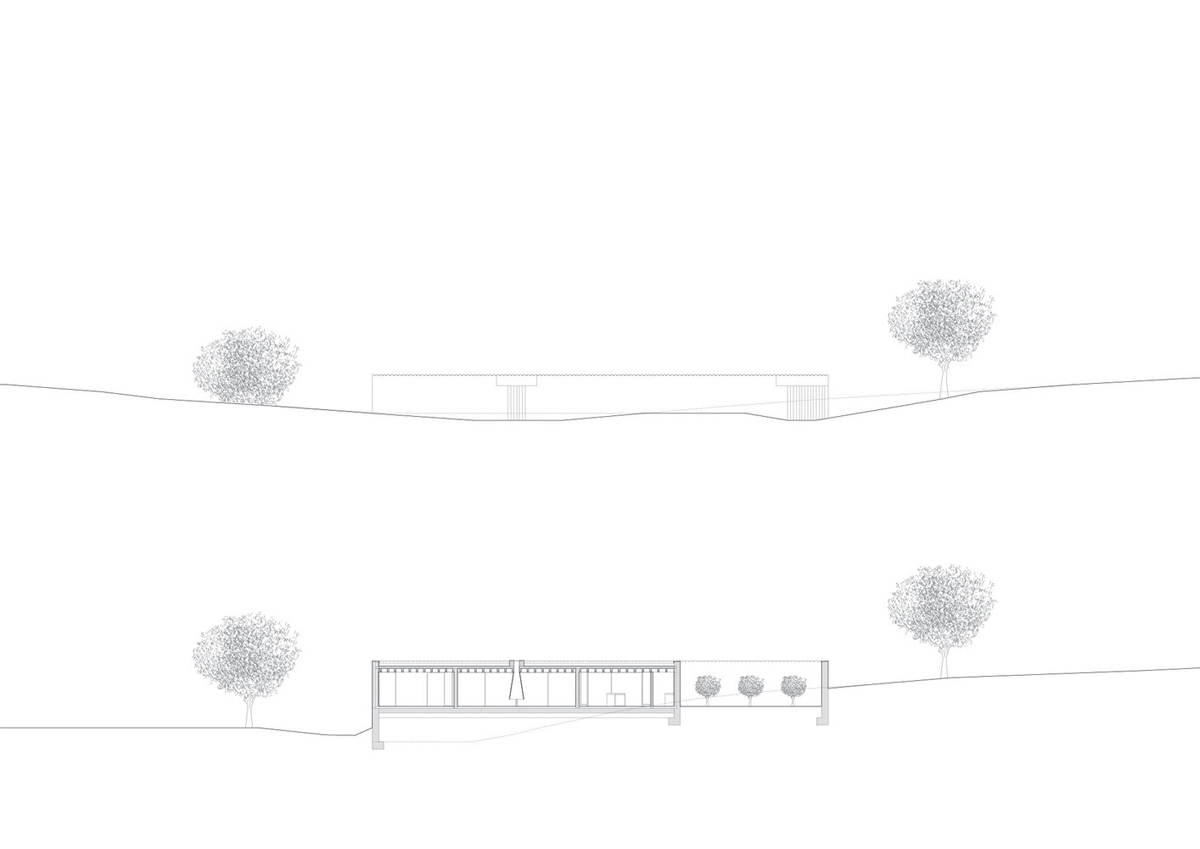 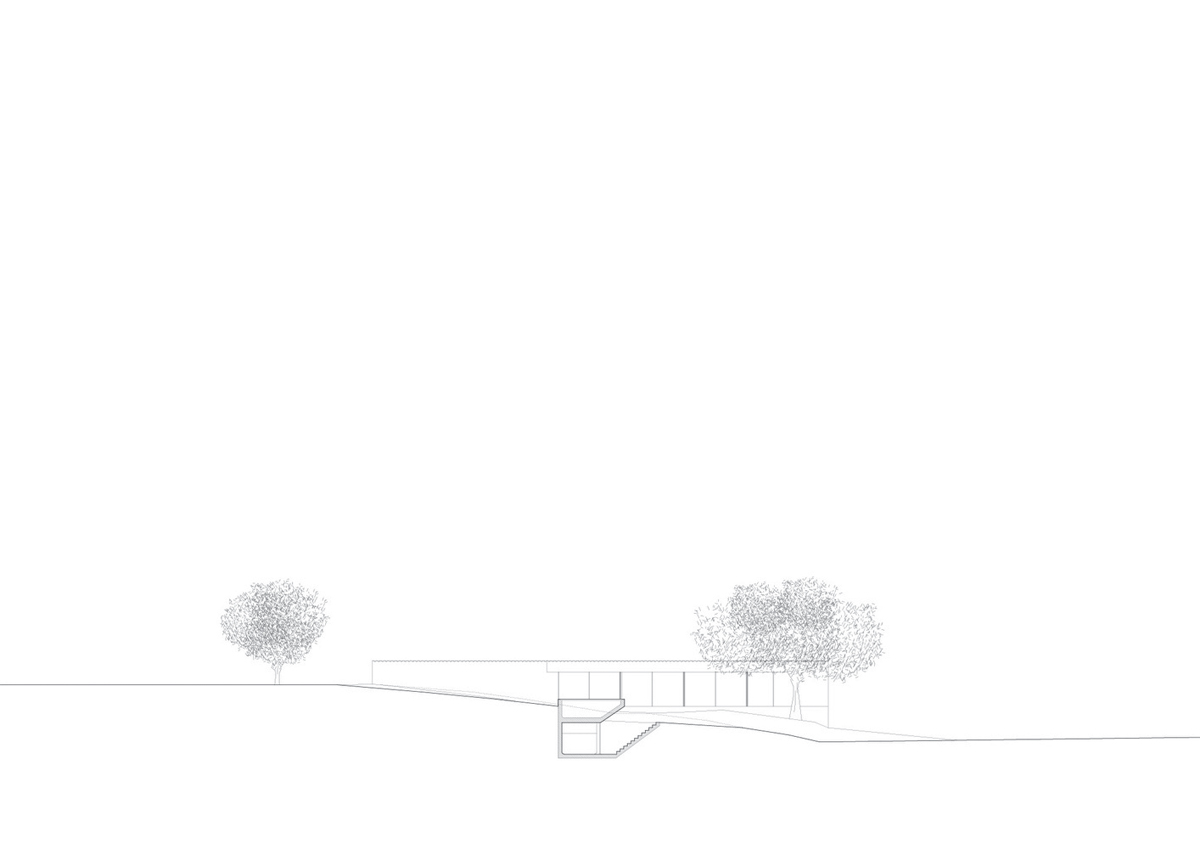 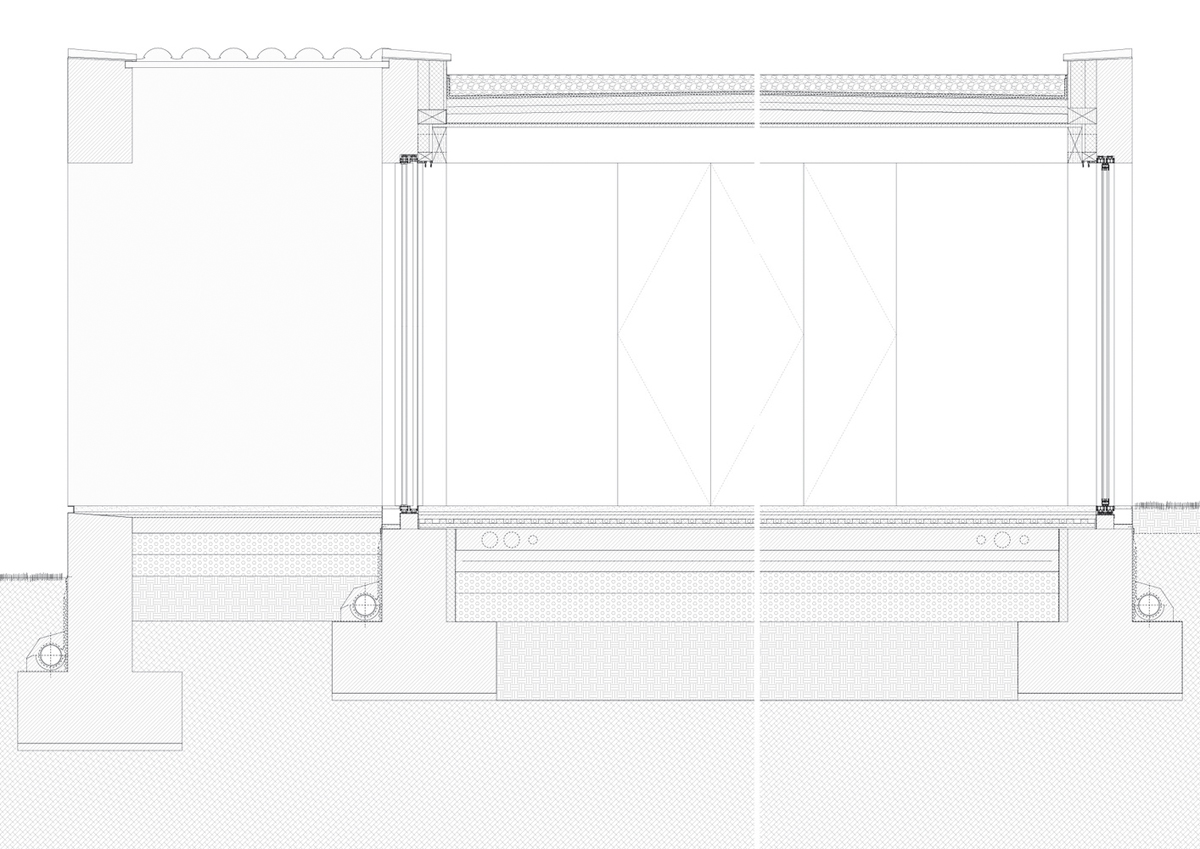 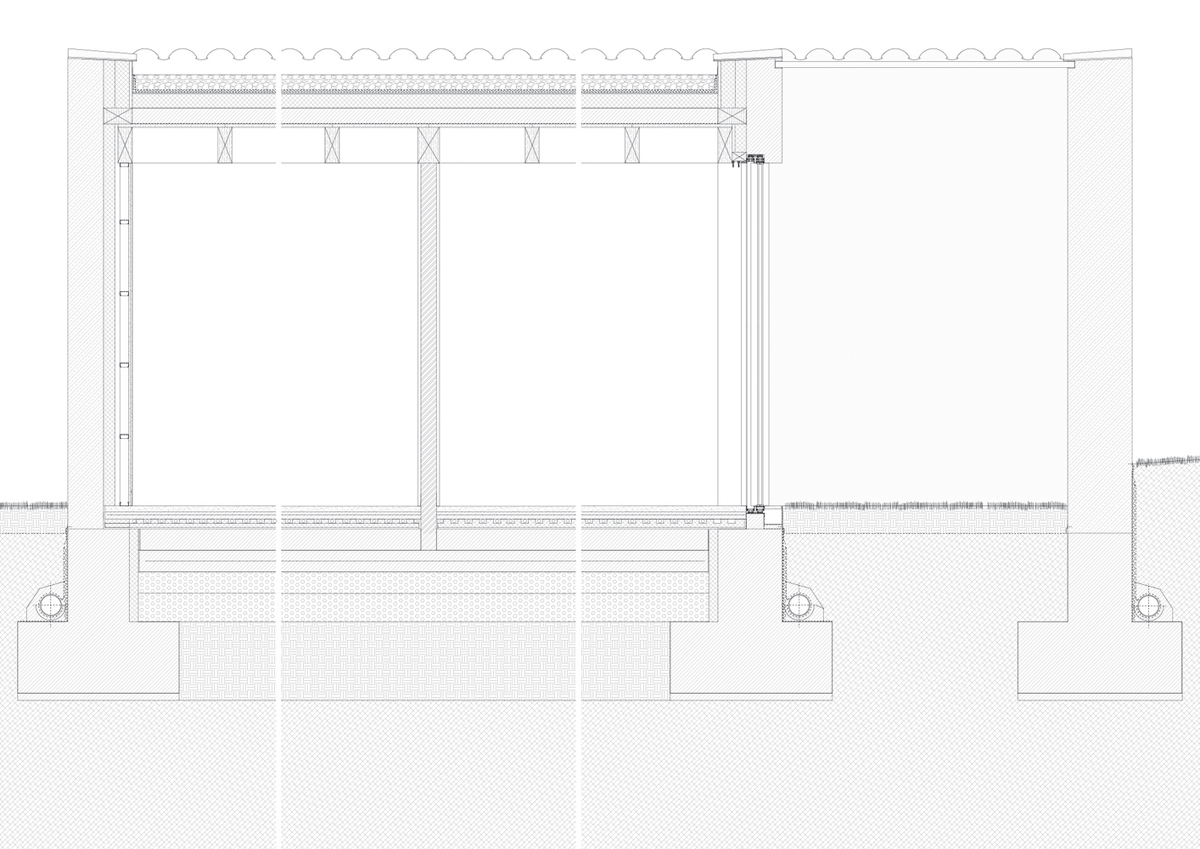 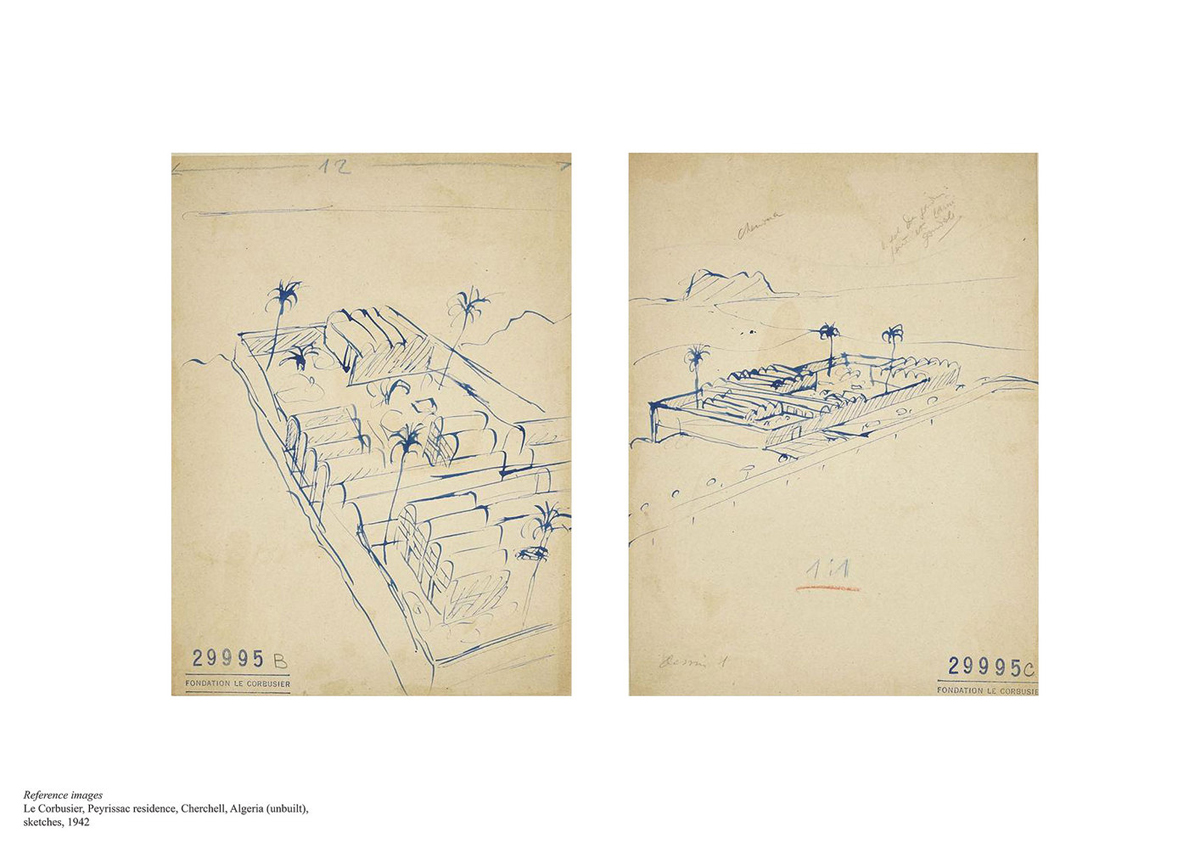 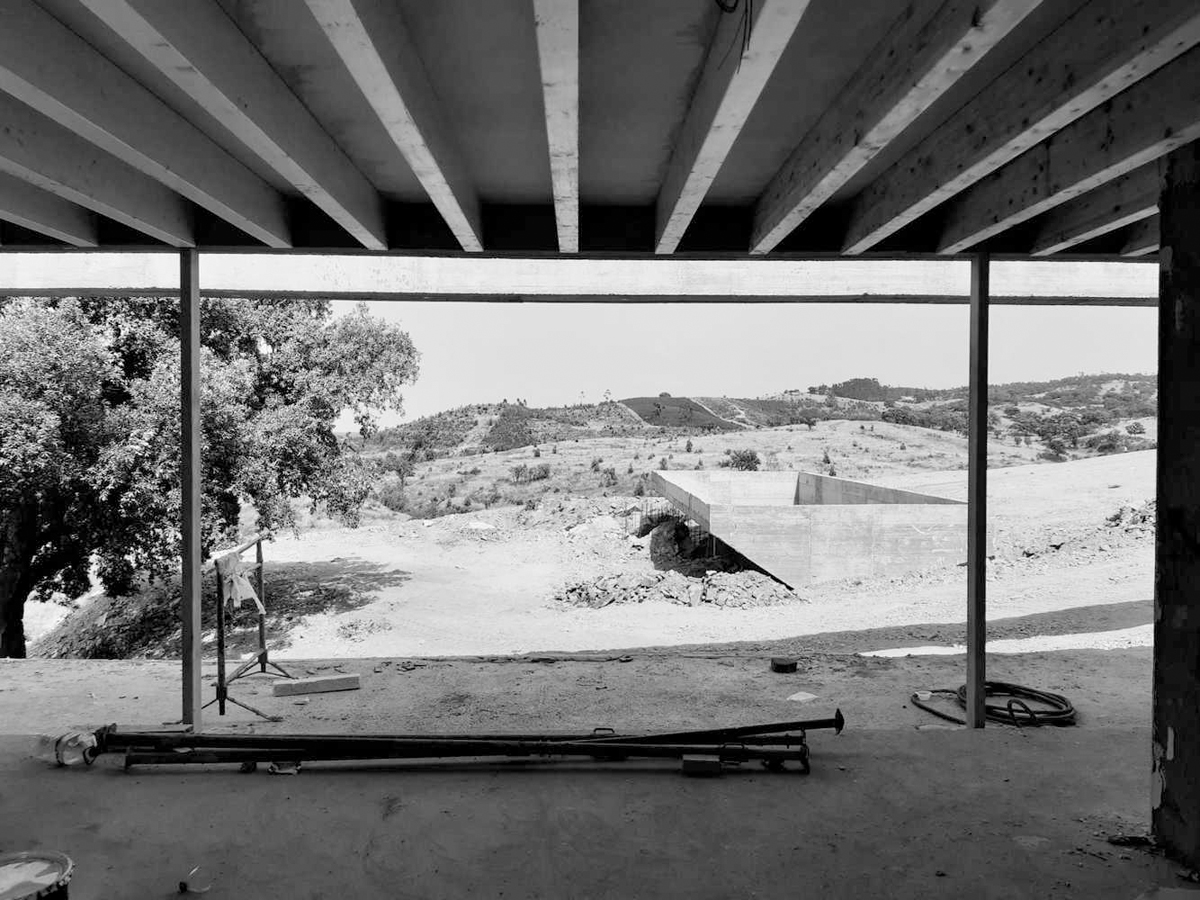 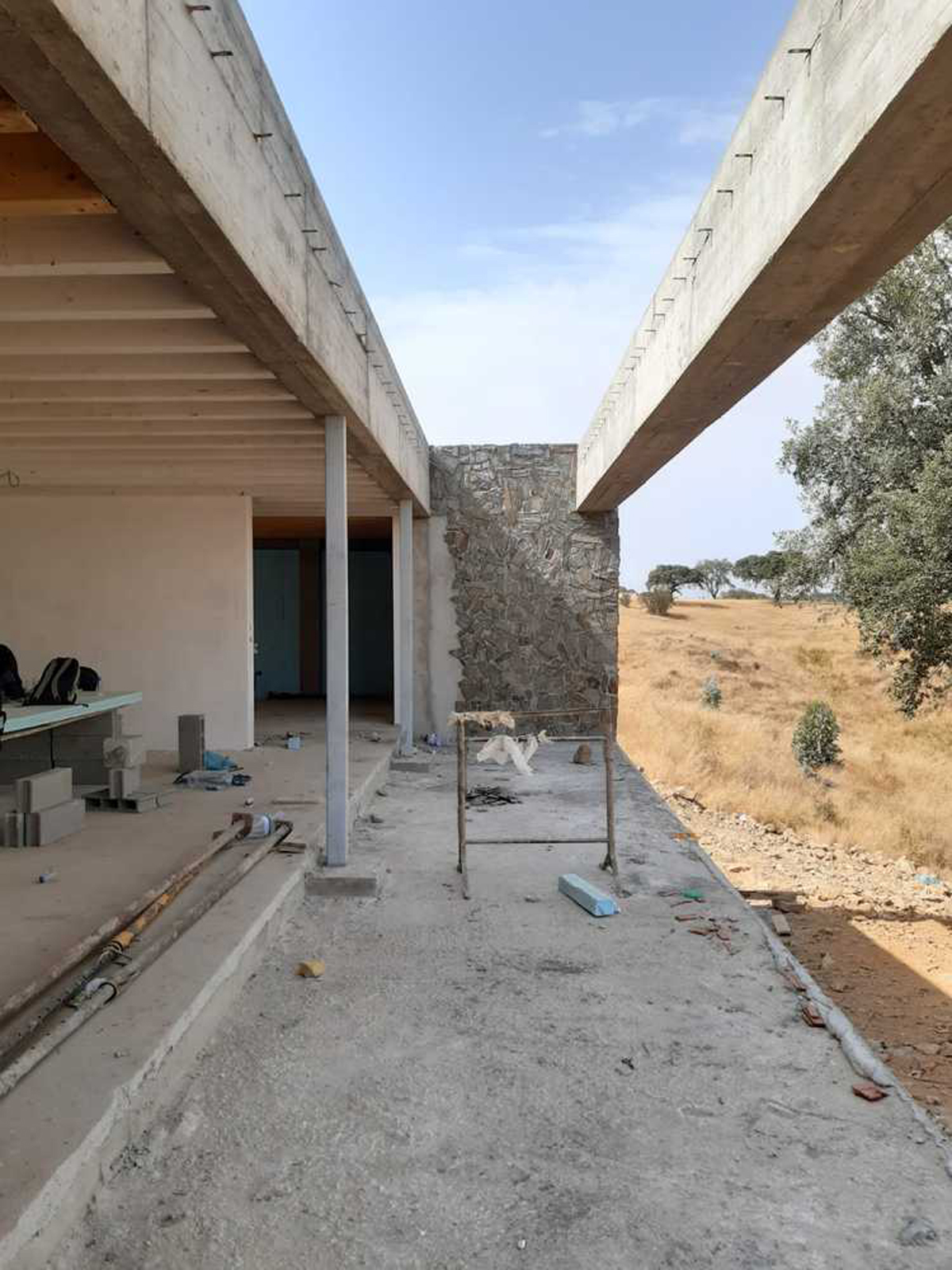