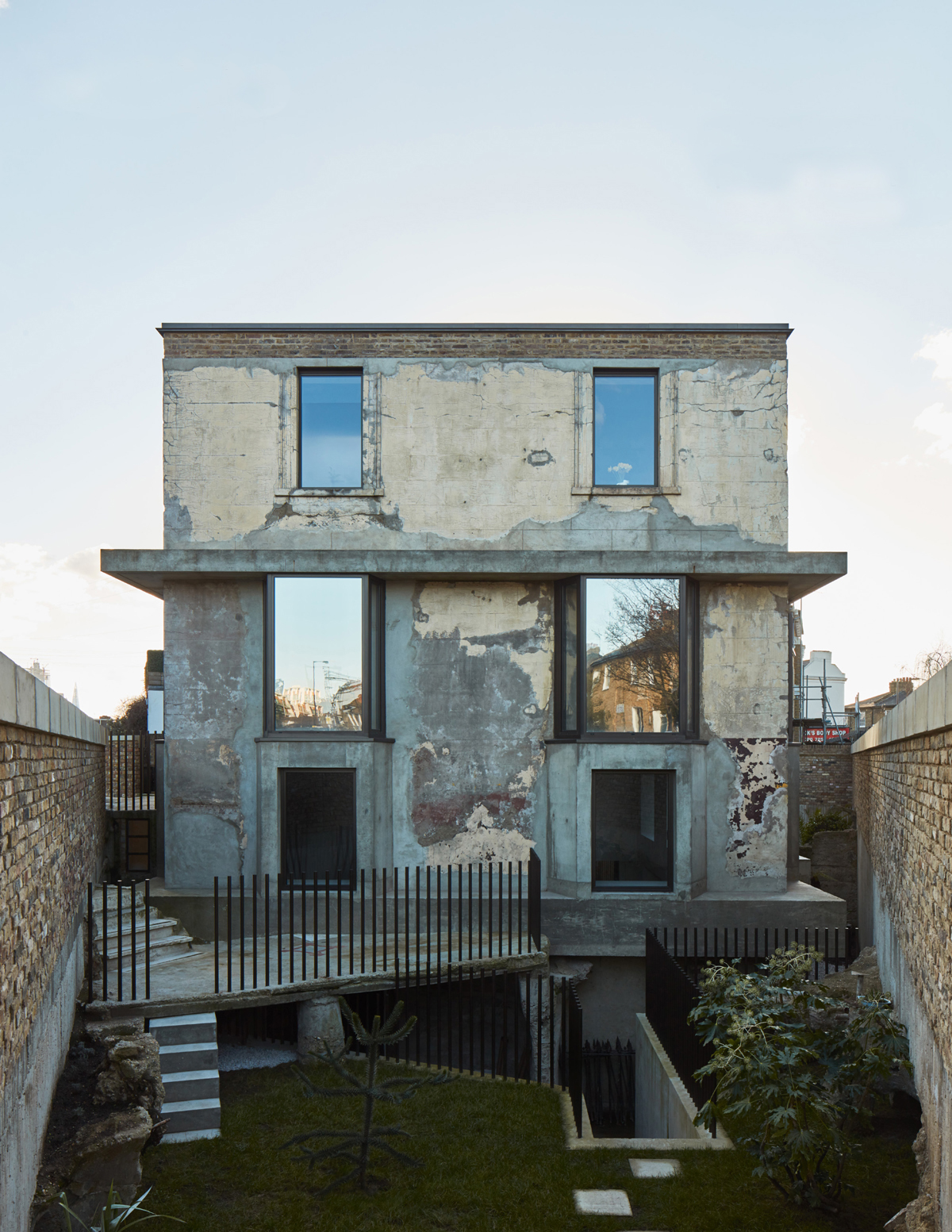 Mole House is a three-storey live-work space in the heart of Hackney, designed as a single-family dwelling for contemporary artist Sue Webster. The project came together as an exercise in excavation and retention, with Webster’s vision for the new home being strongly tied to the history and fabric of the original building. The detached Victorian house was left vacant and derelict after a 40-year long tenancy, held by a resident locally referred to as the Hackney Mole Man. Known for having spent years burrowing a network of tunnels beneath the property, his decades of organic digging yielded a subterranean system of multi-directional passageways. With the quarrying having seriously compromised structural integrity, the house was eventually seized and excavated. Its burrows were plugged with aerated concrete to re-establish structural safety and over 33 tonnes of debris were removed from site. Webster was compelled by the potential of the standalone property, captivated by its accumulated layers of history – both architectural and social.
The resulting conversion celebrates the legacy of this unique site, preserving authenticity with new additions that clearly delineate from existing elements. The design is born from an archaeological exercise, a gradual reveal of time through the process of excavation – an unearthing of up to 2,000 tonnes of filler concrete revealing several years of fossilised domestic history.

The re-instated building occupies a triangular plot and has been expanded at basement level, offering newly configured open-plan living spaces, each surrounded by a sunken landscaped garden along its perimeter. There are multiple entrances to the house, a reflection of the unearthed tunnels beneath, two of these entrances are directly accessible from the driveway and Mortimer Road, one guides you to the lower ground floor studio and the other to the main house living space. There is also an entrance to the house via a set of steps that lead to the front garden and eventually to the studio and the rear garden. With this careful and methodical excavation, you can experience the uncovered pieces of history, moments of a previous time, that are exposed as you walk around the garden.
Externally, the original masonry fabric is preserved, with 15,000 reclaimed London bricks used to supplant areas of excess damage. The exterior render is retained, expressing the building’s derelict bunker-like appearance. New concrete bay windows bordered by patinated bronze frames protrude beneath a concrete band, slicing horizontally through height of the house.

Internally, a cross-shaped concrete structure in the centre of the plan divides each floor into four zones, supporting new floor slabs and bracing external walls. Original internal walls and floors have been removed completely, having either collapsed or eroded beyond repair. An existing party wall that once divided the property into two houses has also been demolished, creating a more expansive, flexible, and unified space. Interior volumes are characterised by a minimal material palette of exposed concrete and timber, with a cantilevered staircase descending into a lofty, light-filled basement studio. The upper floor, which has been heavily reinforced following fire damage and corrosion, is punctured by a large, openable skylight. Natural light permeates throughout the residence, filtering in through full-height windows and doors that line each storey. The building has been excavated to below street level, solidifying existing foundations and providing extended contemporary living space. A singular slate sheet replaces the building’s original gable-end pitched roof, providing material contrast with the external brick, whilst tonally conversing with the window and door frames, as well as the fencing introduced within the site’s landscaped garden.
Mole House demonstrates a combined vision between client and architect that exalts urban, tactile and personal histories. Its design approach is defined by considered restoration, material authenticity, and elevated functionality. 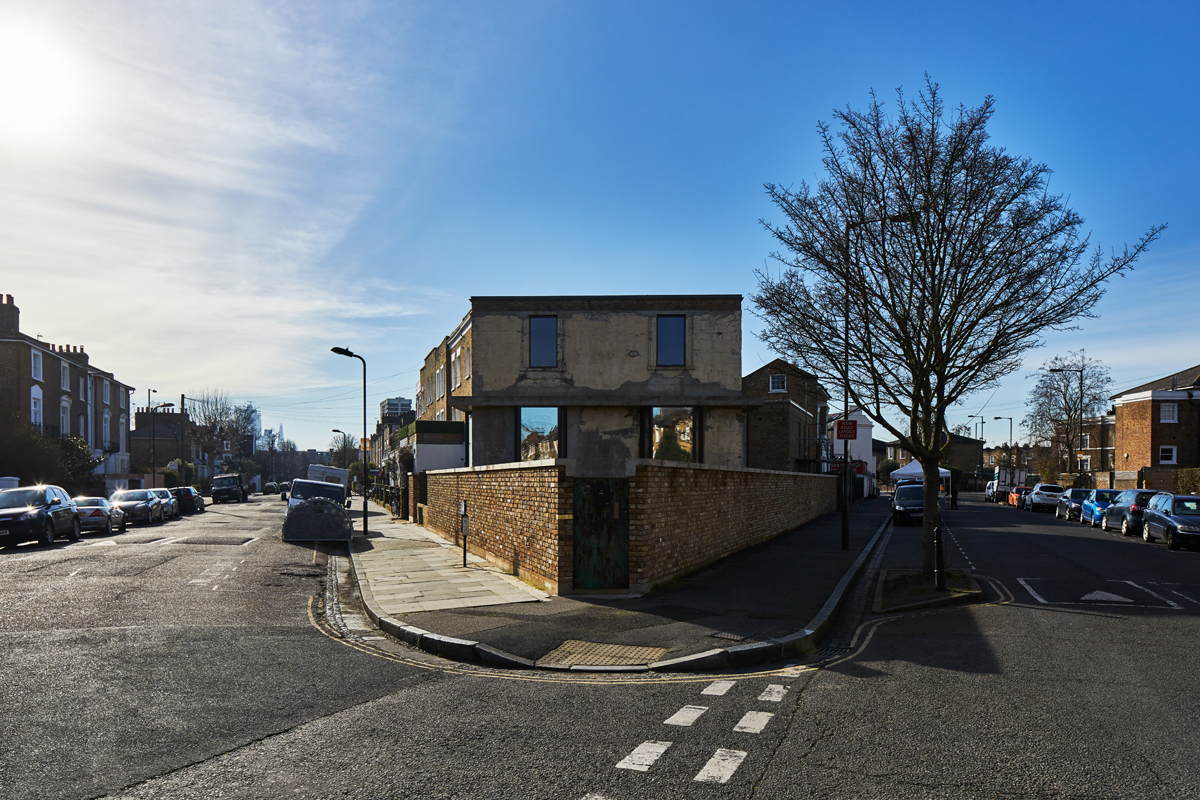 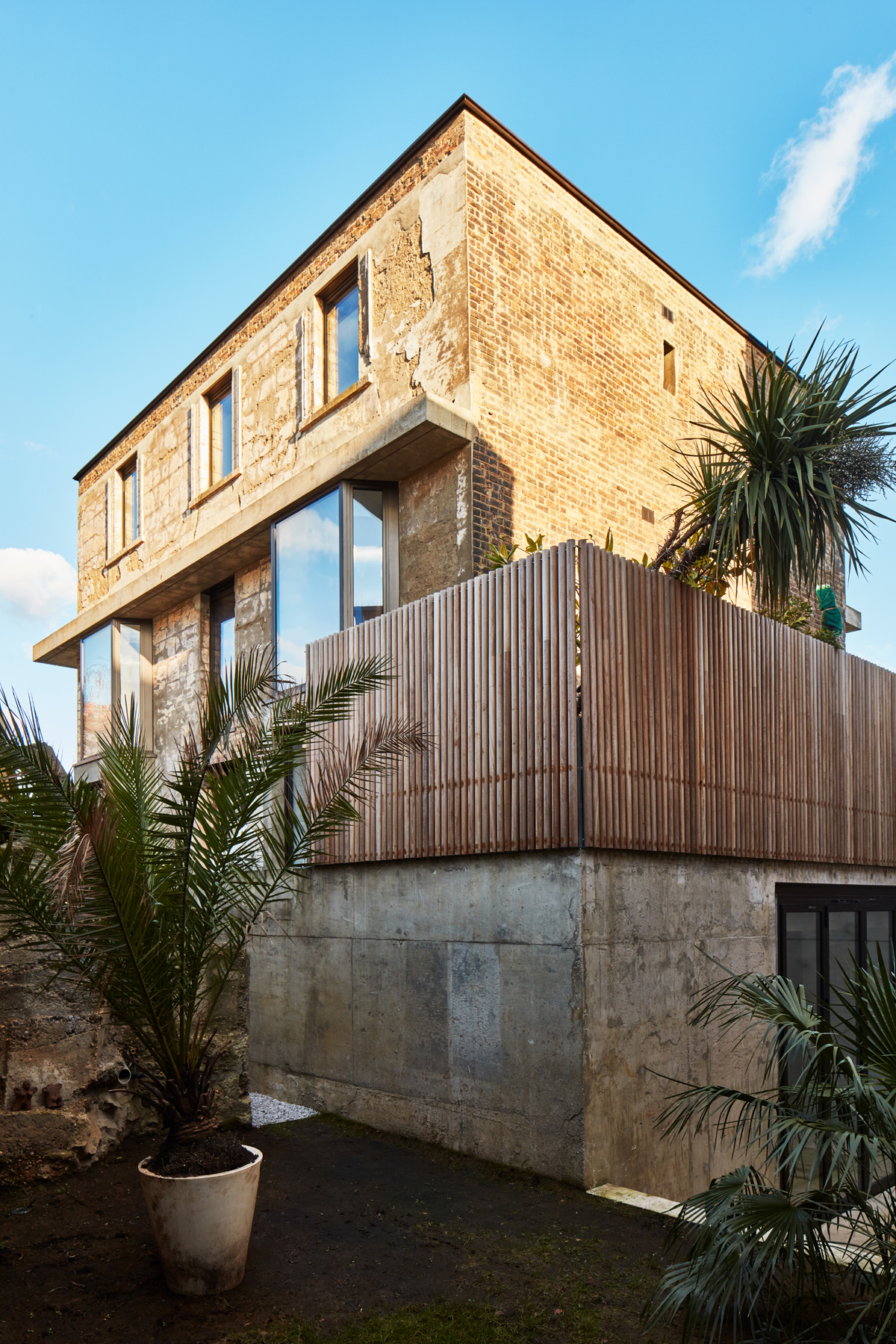 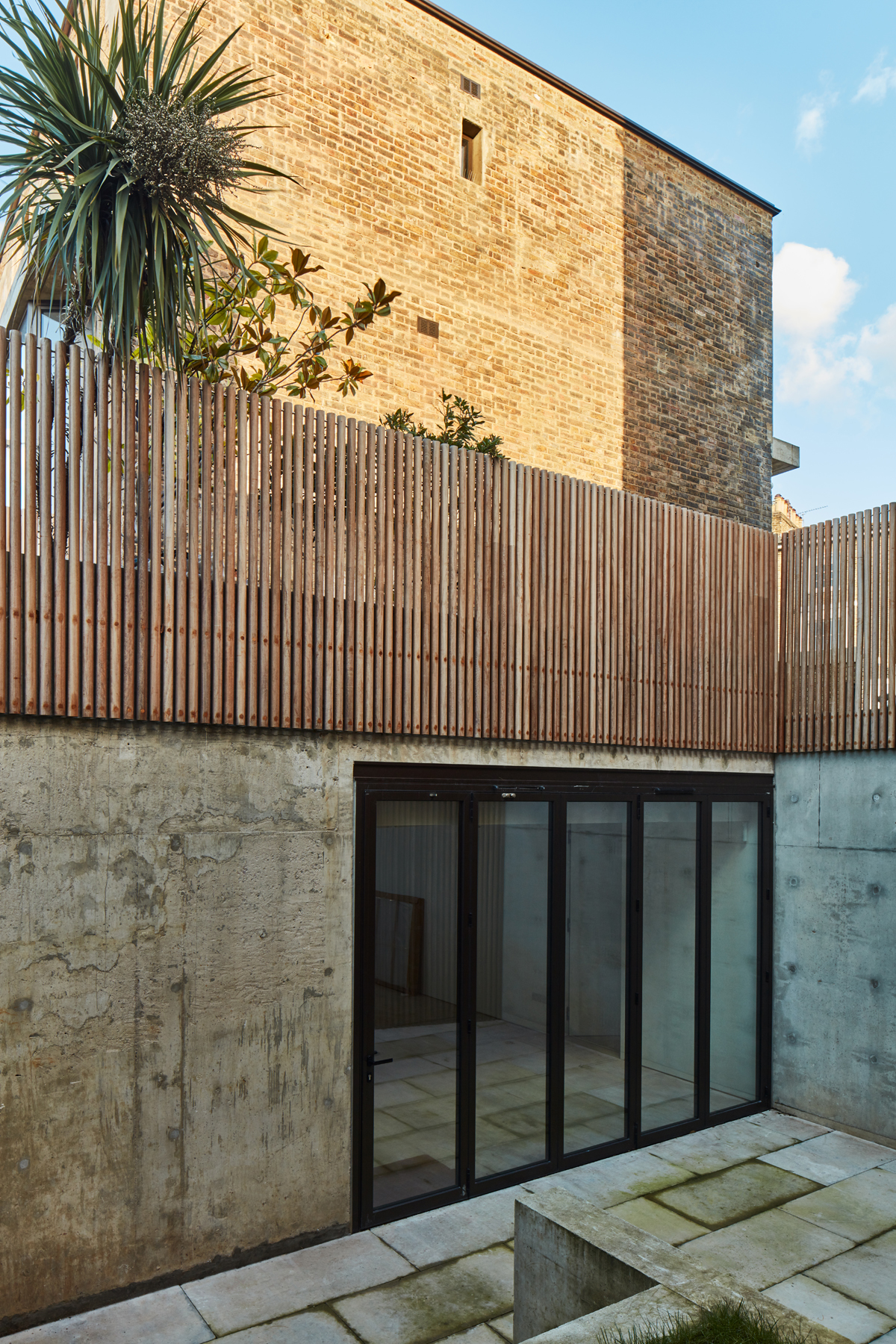 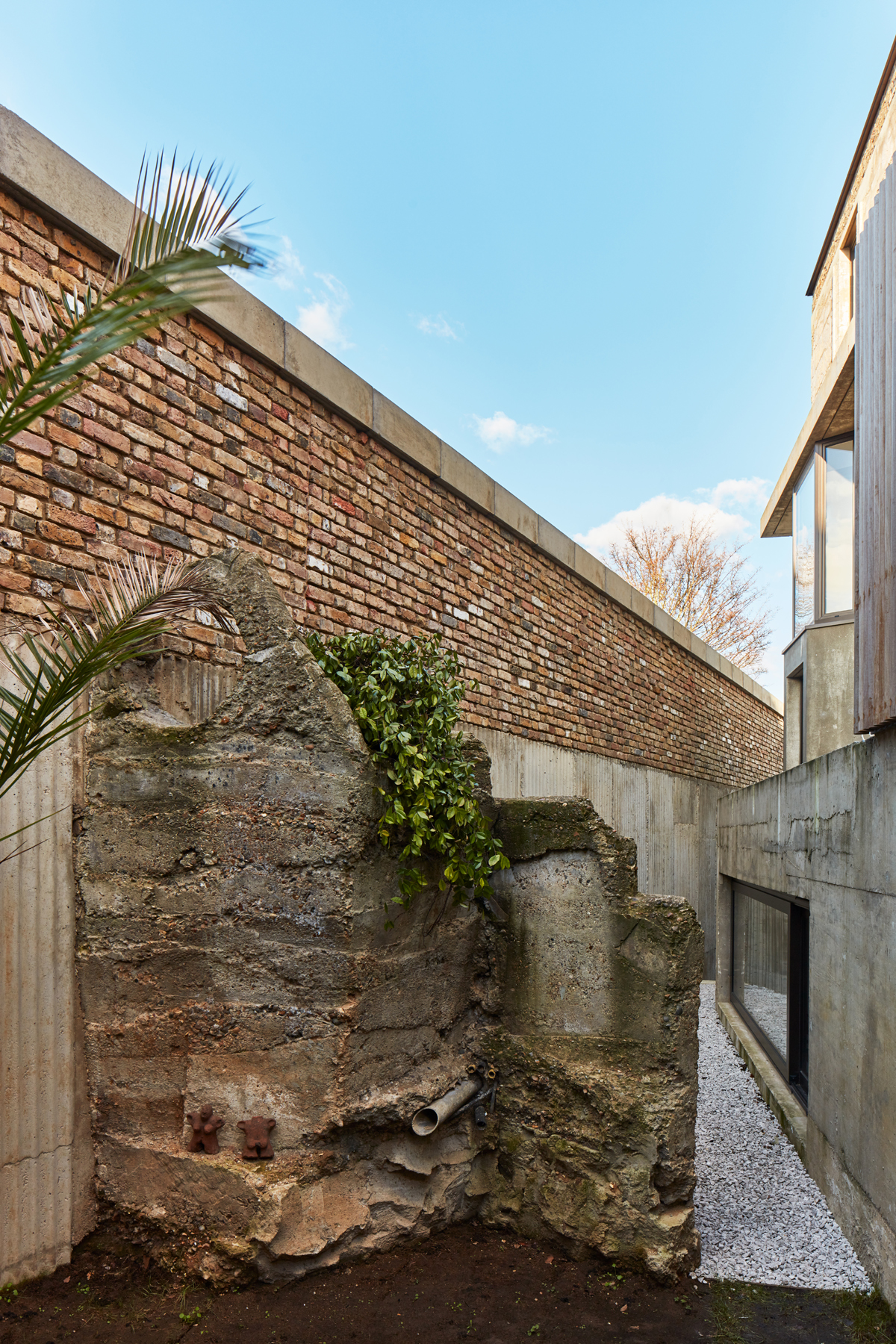 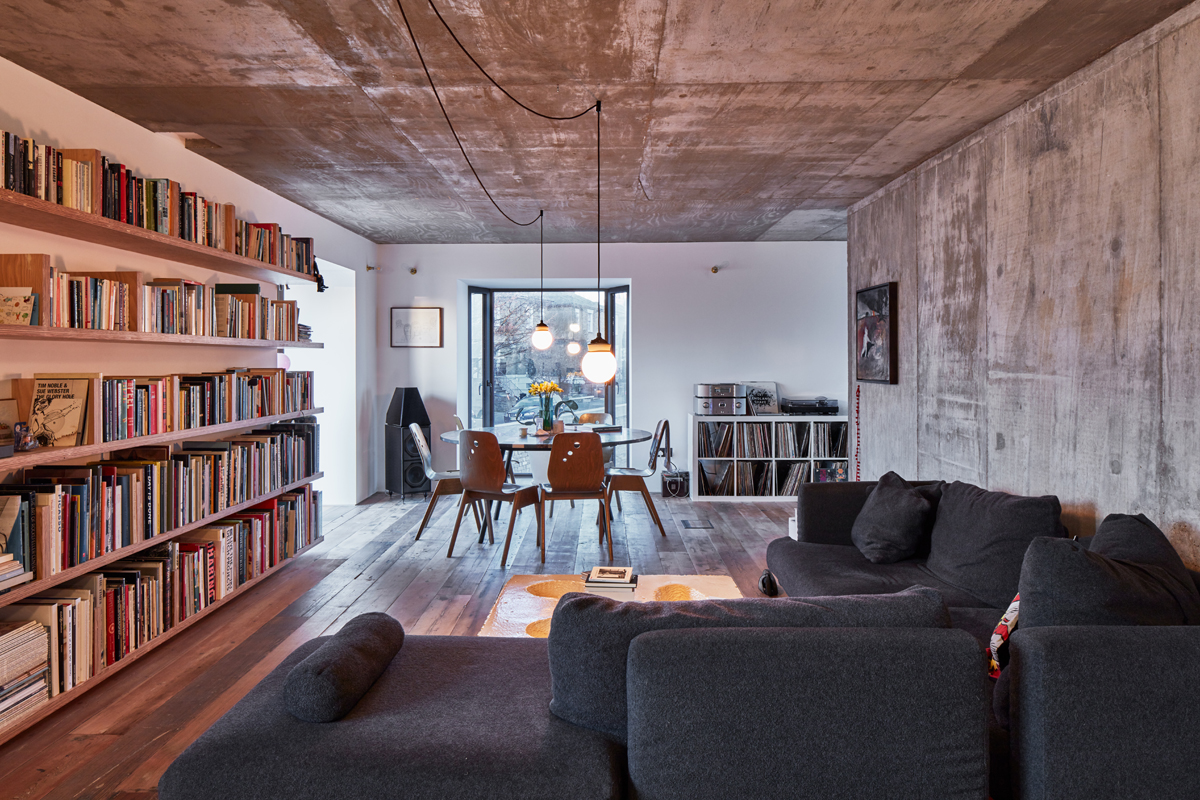 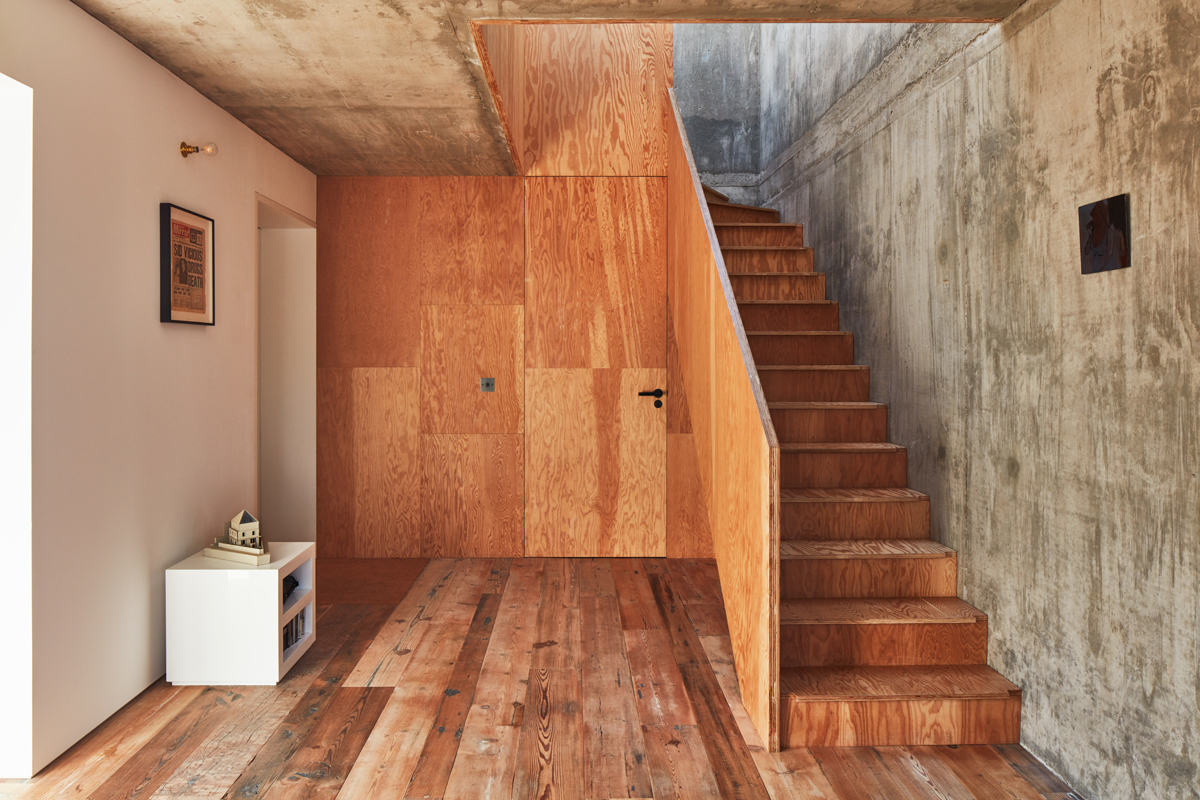 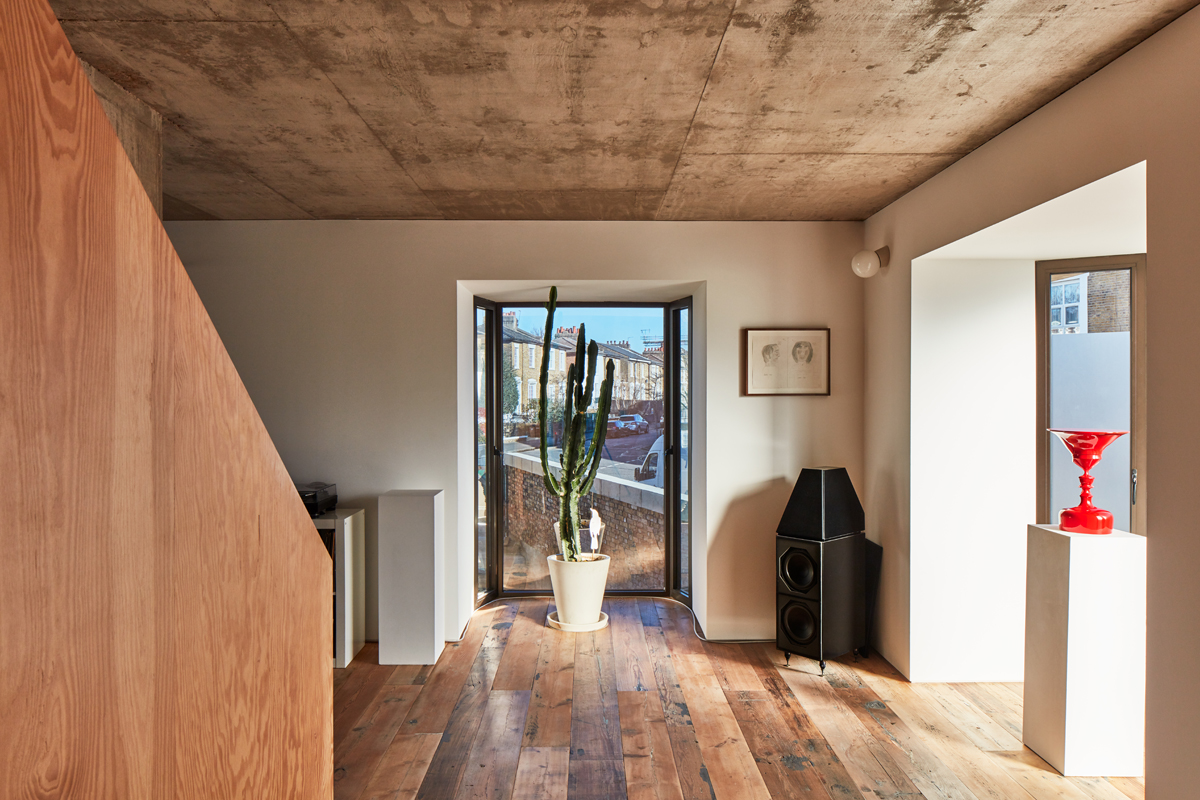 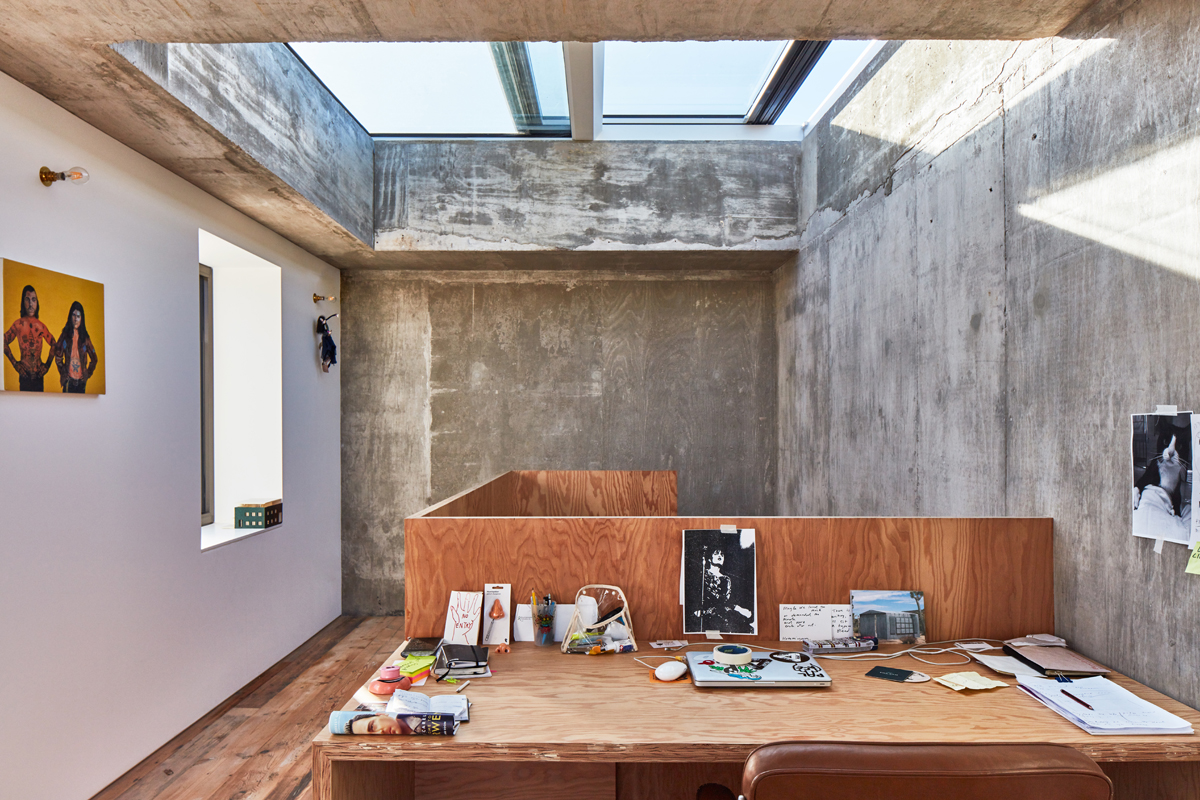 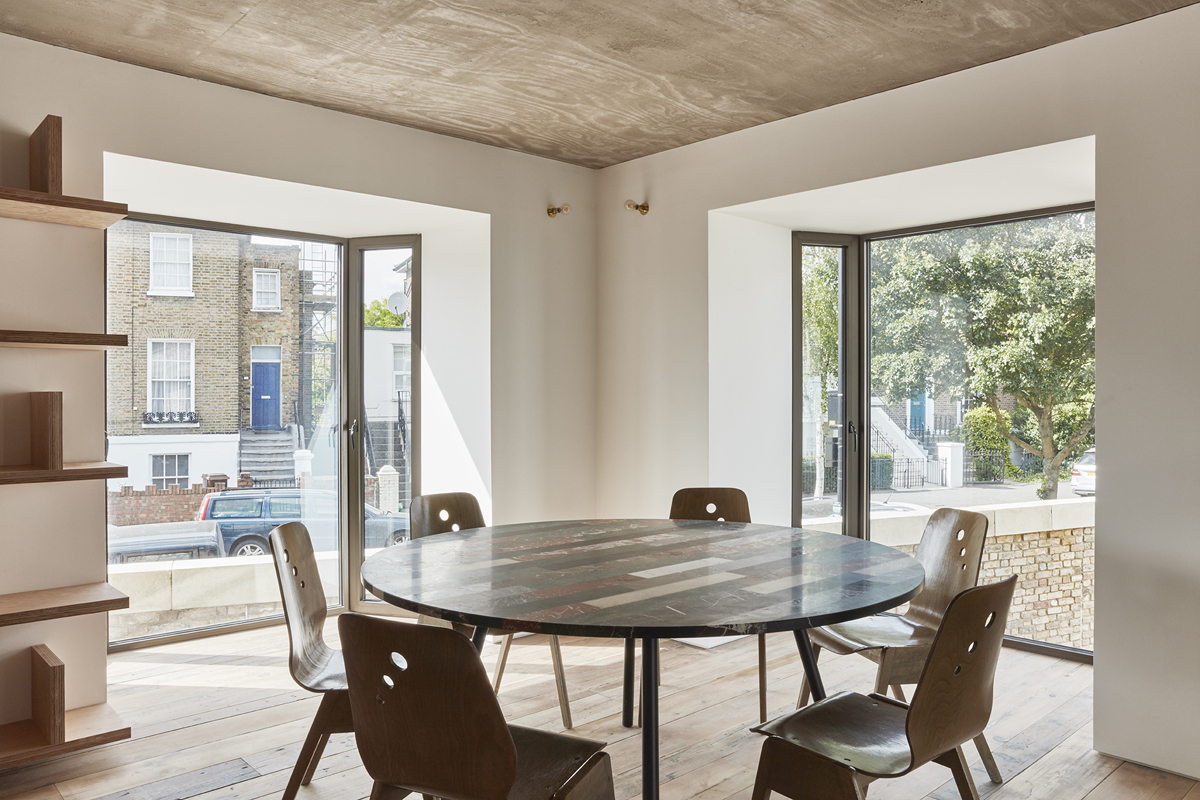 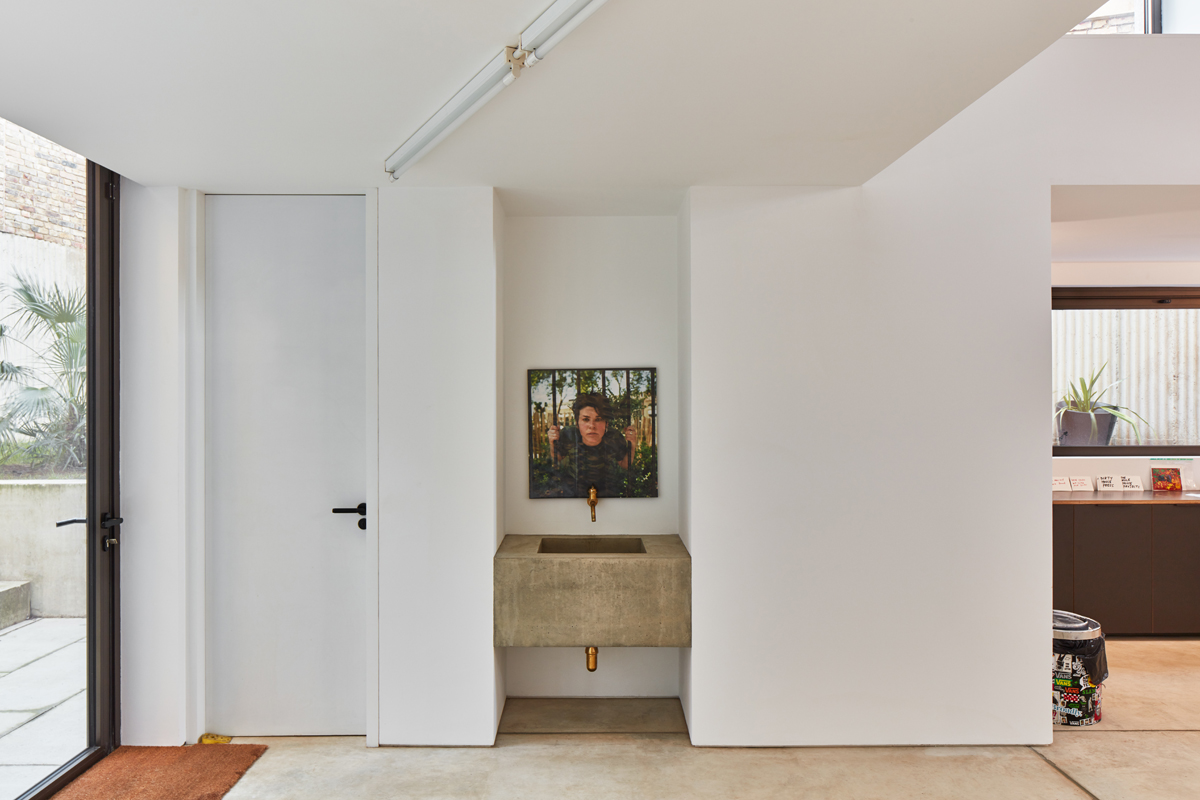 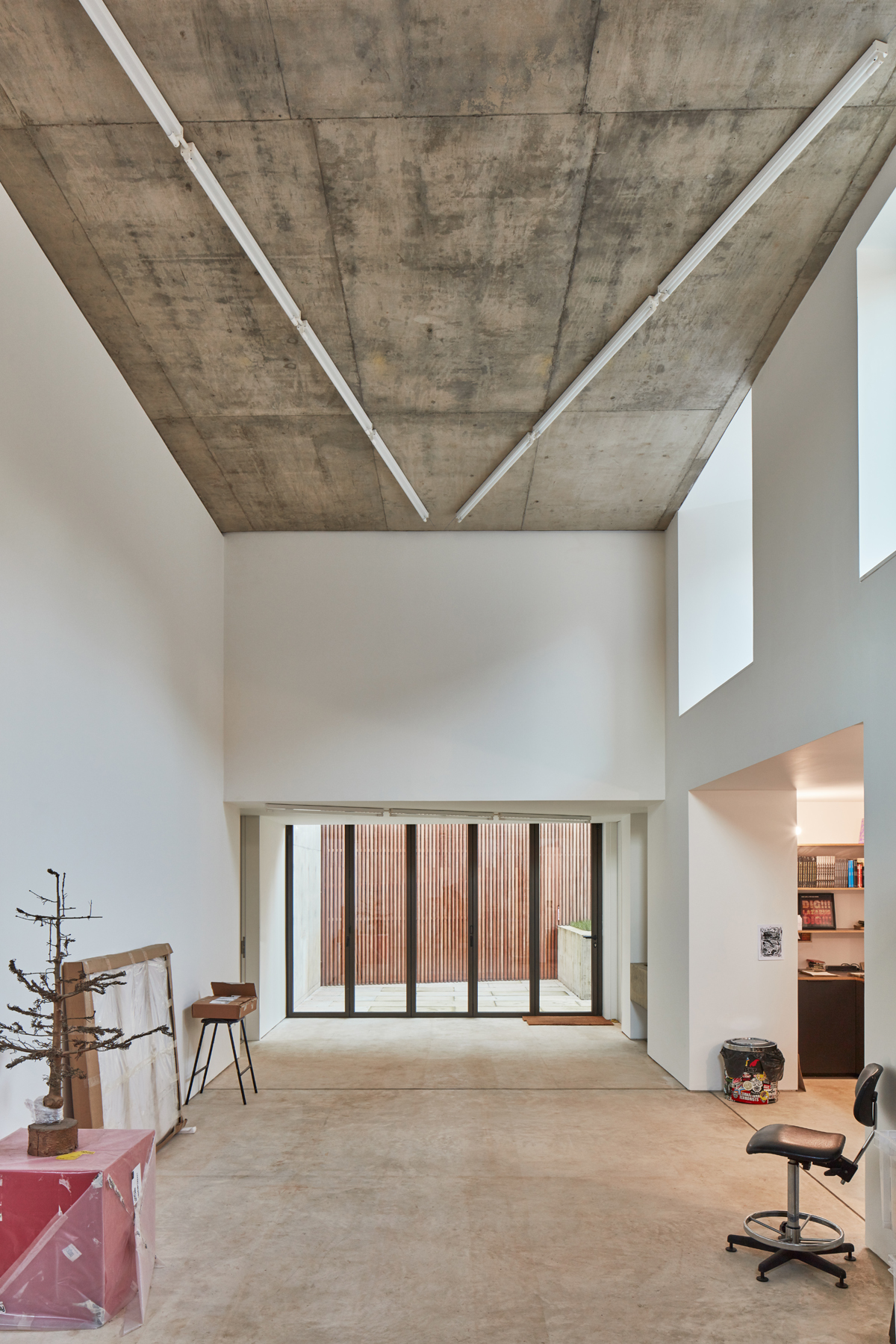 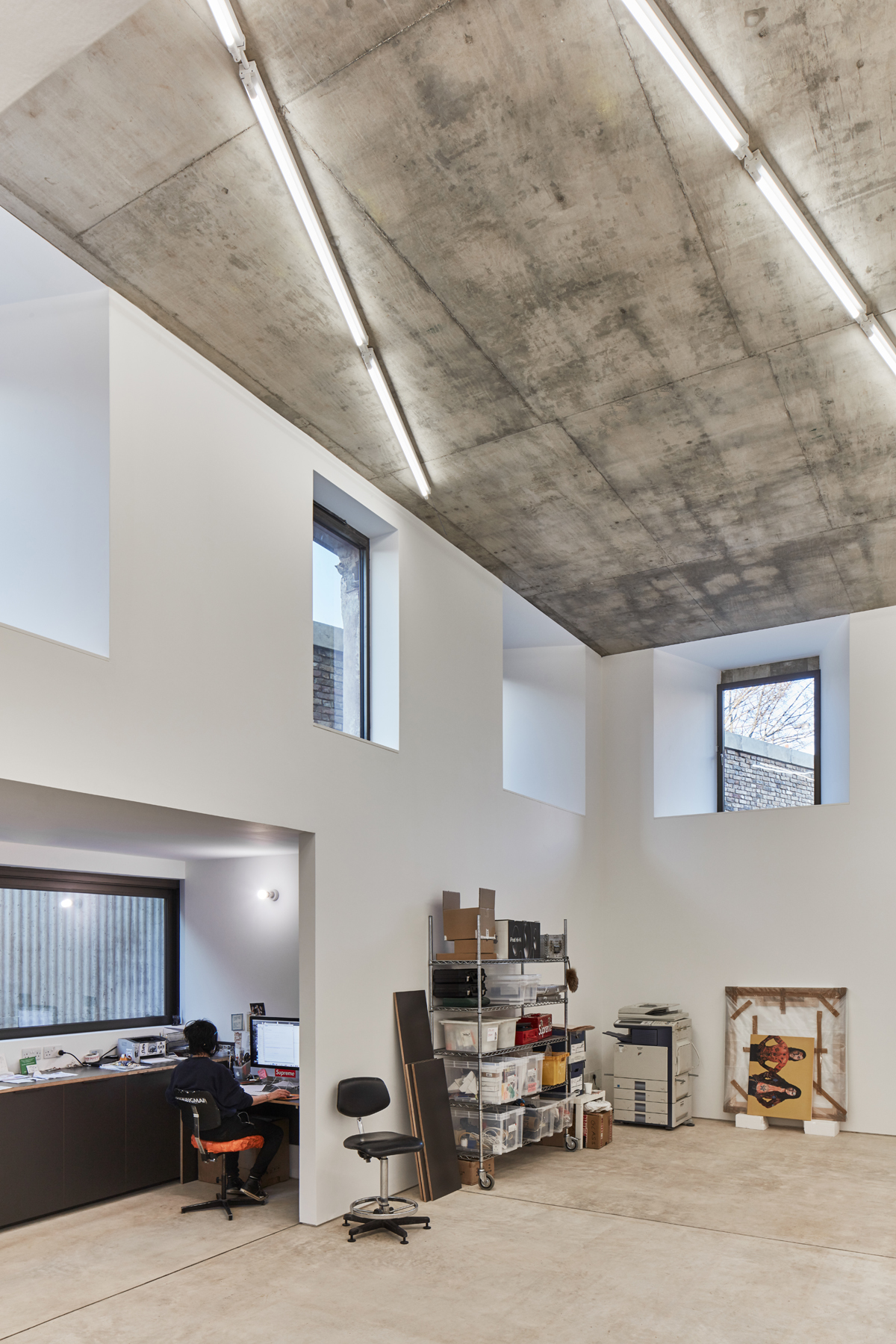