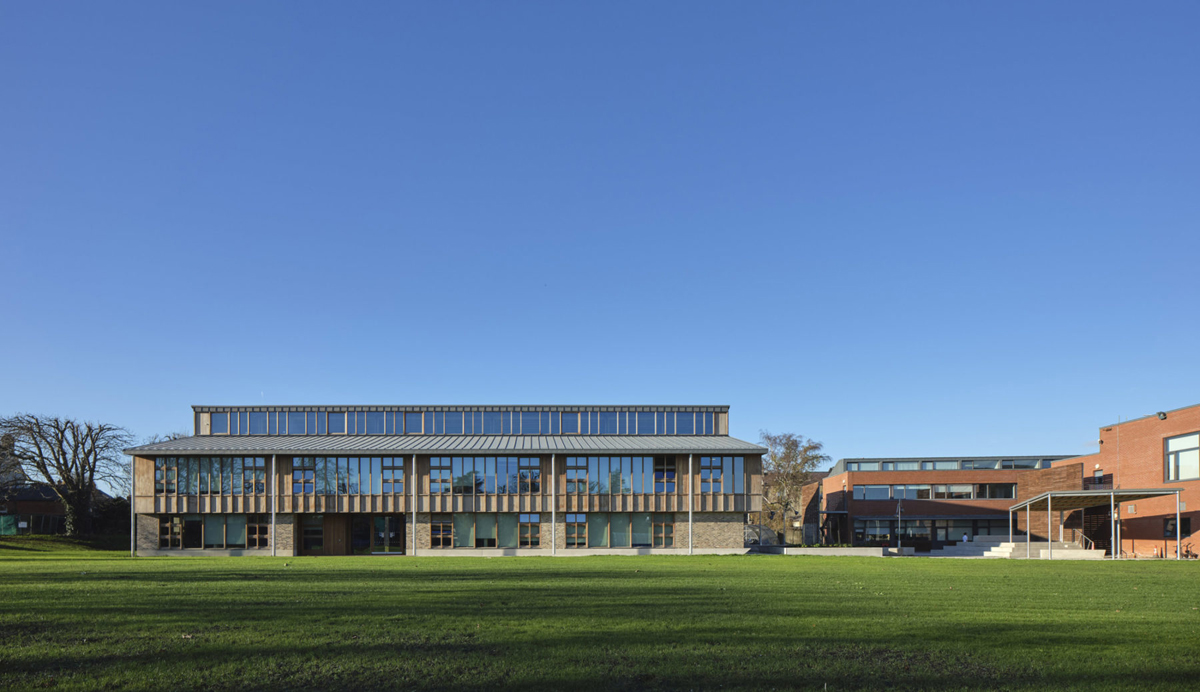 Sandford Park School, founded in 1922, is a small private non-denominational co-educational secondary school with pupils from a wide variety of backgrounds, countries and cultures, creating a unique environment within the school. The school buildings are situated on a beautifully secluded 2.5 hectares of land, with two protected structures on site. O’Donnell + Tuomey have proposed an overall vision for the School which is to create a campus atmosphere for the school community. The masterplan proposes that the existing ‘village street’ of the school extends from the new Le Peton Building at its southern end (completed 2019) to a future new Arts Block to the east near the main entrance. Along this street a series of inter-connected spaces expand and contract, allowing the staff and students to interact with one another.

The completed works include a new School House – the Le Peton Building, as well as the removal of existing hockey pitch and the re-configuration of the existing sports playing areas to include a new hockey pitch and a smaller rugby pitch. There are 10 classrooms, 3 meeting rooms and a social space within the new school house. New areas of brick and concrete paving with a mixture of soft landscaping are introduced.

The design reflects our interest in the architecture of Ranelagh village, and in the historic buildings on the school site. The brick walls, strongly expressed vertical timbers and grey pitched roof respond particularly to the old house. It carries aspects of the experience we have gained in the design of other schools, like Ranelagh Multidenominational School down the street and St Angela’s secondary school in Cork, both of which have proven to be very successful in use.

The new School House has been carefully positioned to form a conclusion to the street, while on the park side it completes a slightly curved line, a crescent set up by the fronts of the old house, science block and canteen. It complements the old house but does not compete with it or step forward of it. The position of this entrance space along this axis gives orientation to the building as one approaches from a distance. This is an important aspect in relation to the overall context of the new building.

The new School House forms part of the overall masterplan, including 10 new classrooms, internal and external social spaces and a new hockey pitch. This is a two storey brick and timber building, entered through a generous covered outdoor space which looks back down the school street. The heart of the new building is a large sociable space with forum seating which links the two floors and looks out to the playing fields. Corridors are wide with areas for seating and lockers to enhance positive social interaction; they are bright and lively spaces with high level windows and visible timber roof trusses.

The school has an esteemed reputation particularly in the world of music and drama, and a new planned arts block will in the future accommodate a small auditorium, rehearsal spaces and music rooms, allowing the school to continue to build on this reputation for many years to come. This will form part of the final phase of the masterplan. The new space between the canteen and the new Le Peton Building is seen as a focus for external gatherings and activities including debates and outside performances in summer. To accommodate this a set of concrete tribune steps, partly covered with a canopy, has been built opposite the new school house porch. 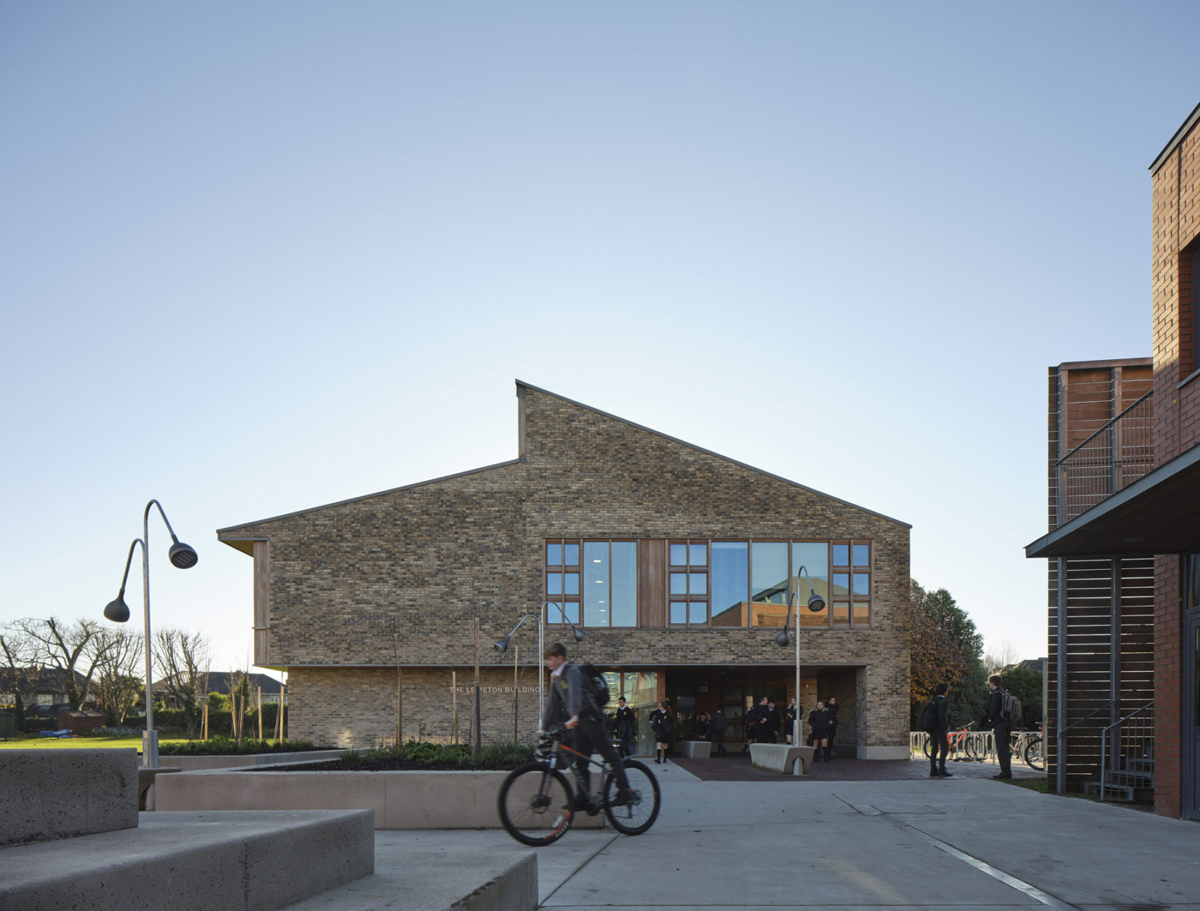 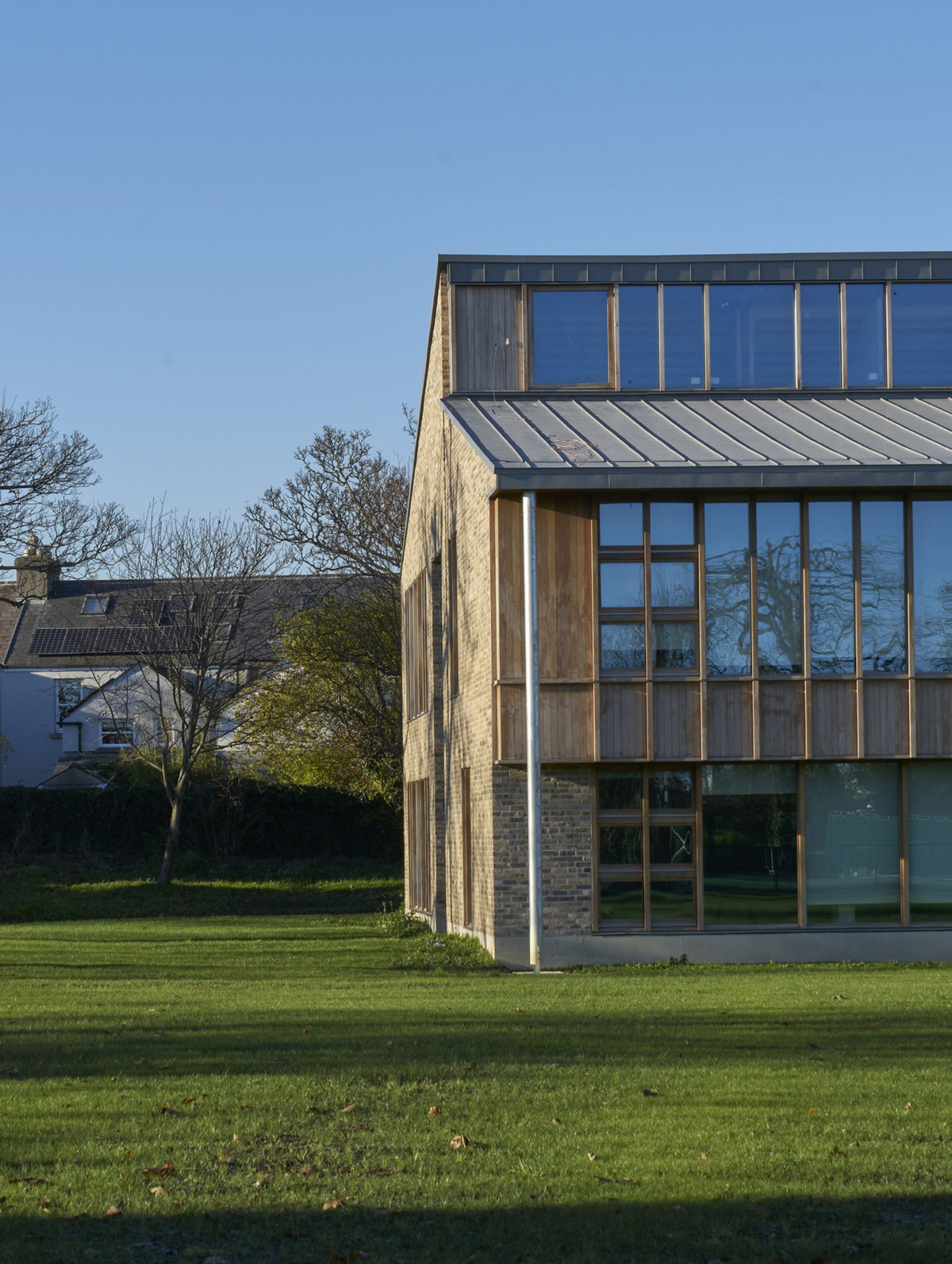 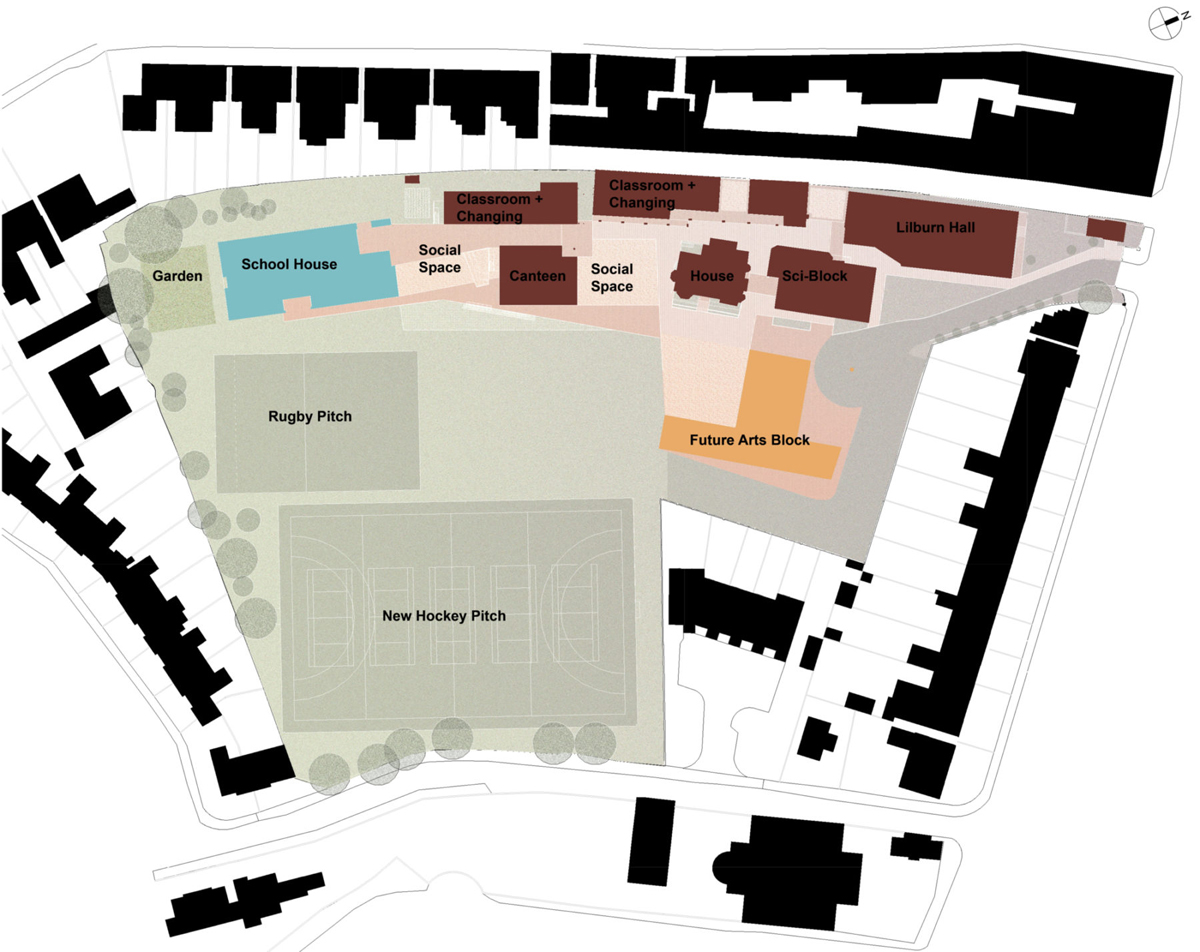 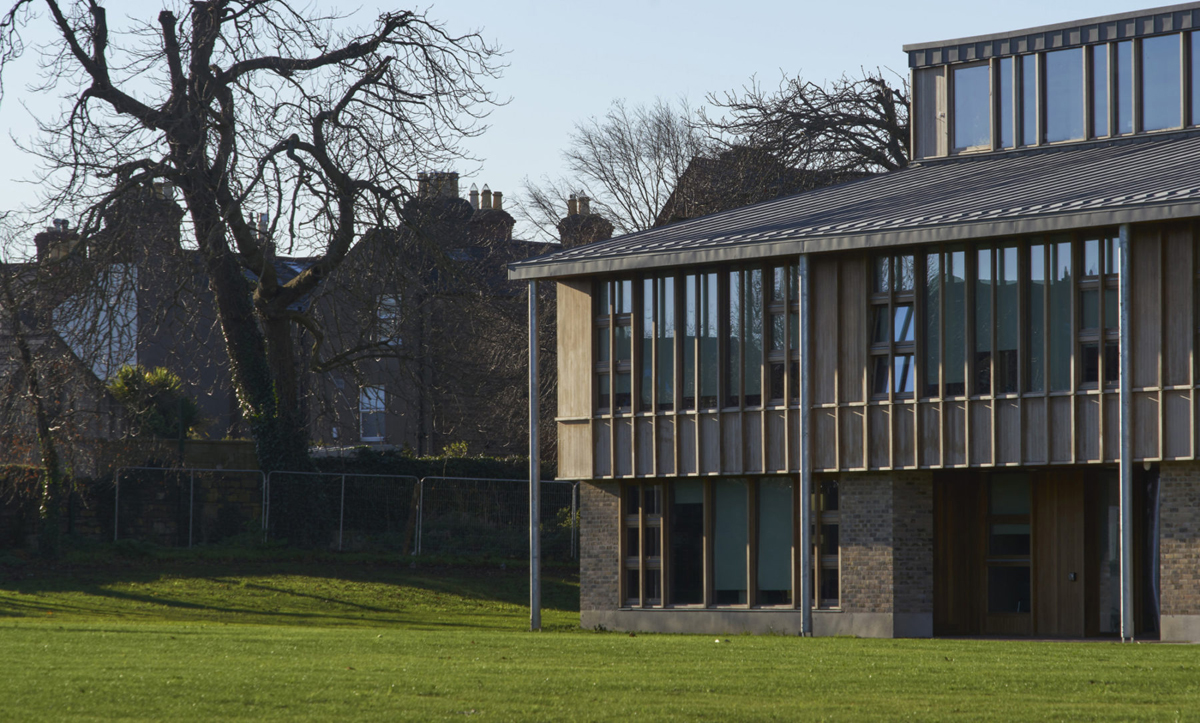 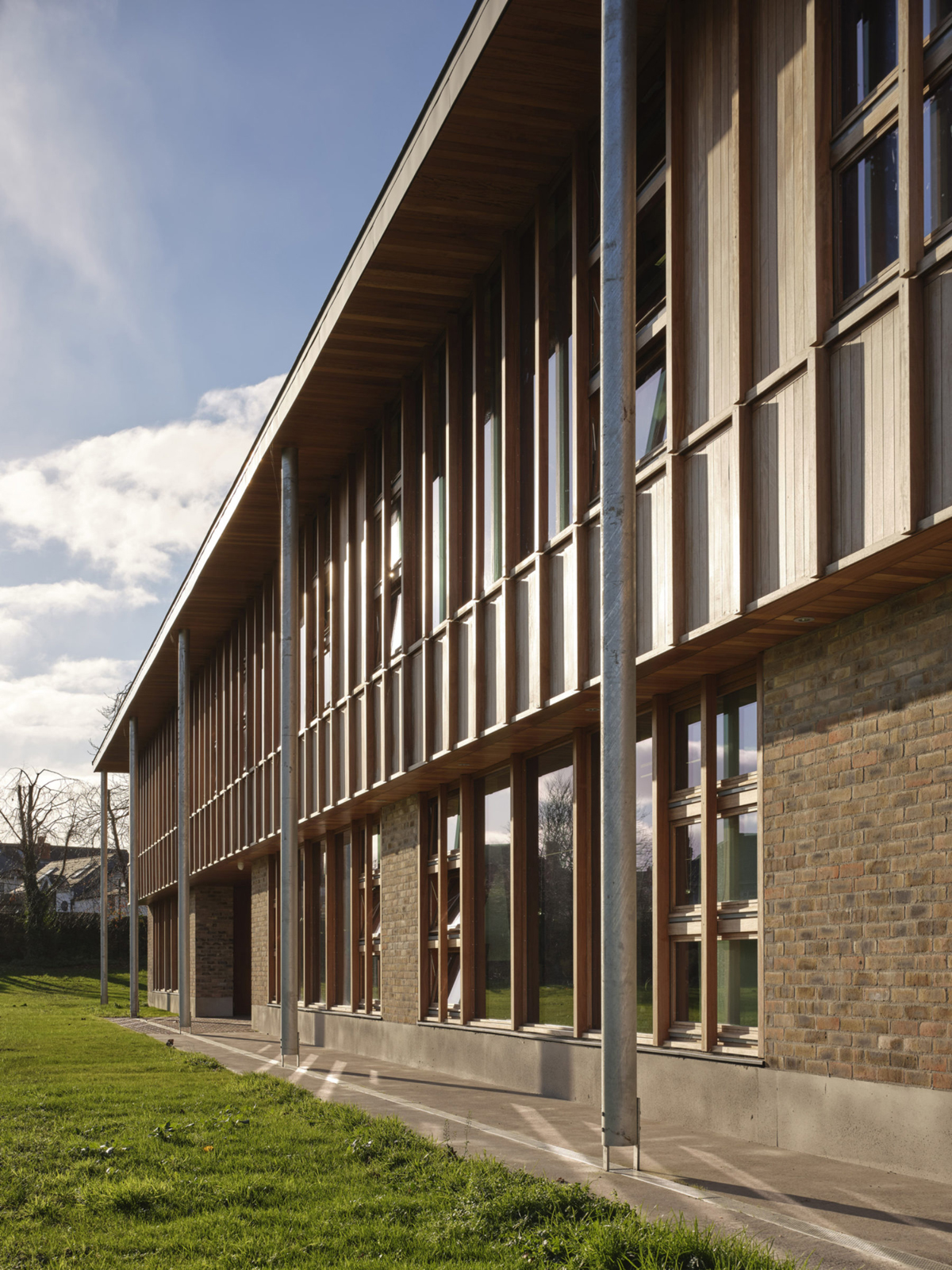 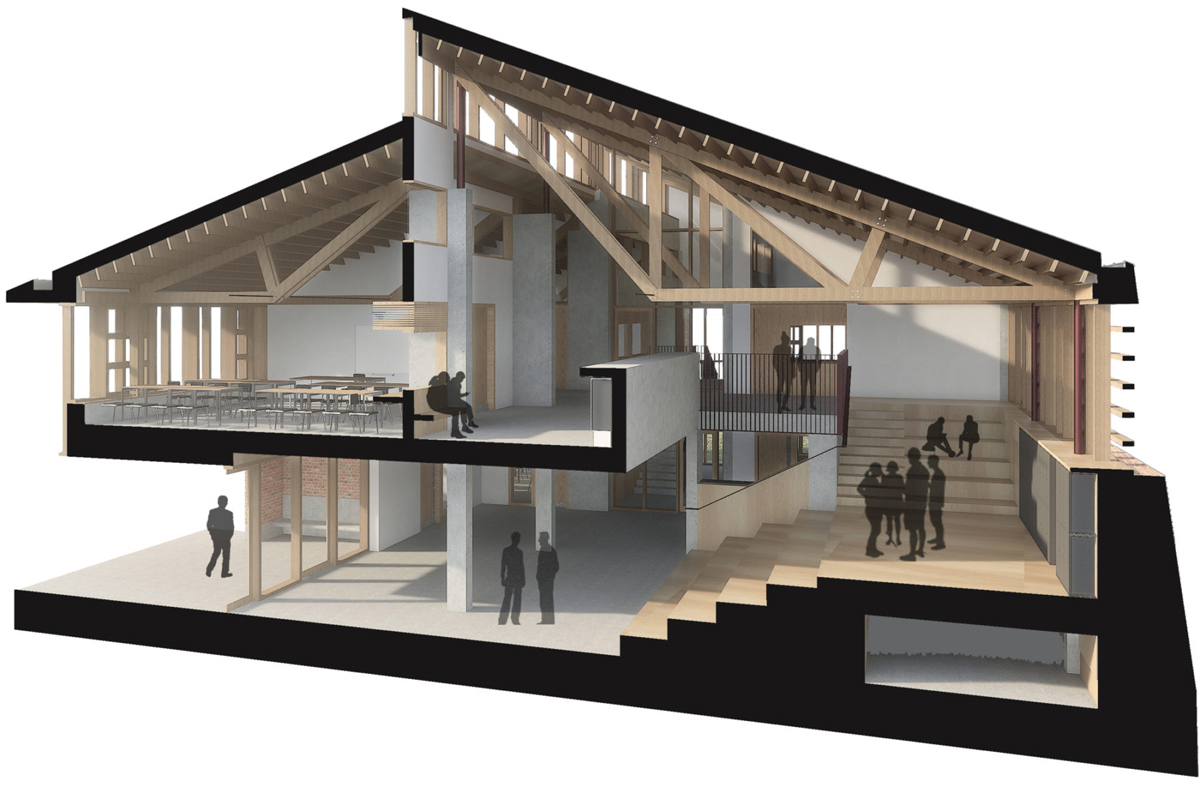 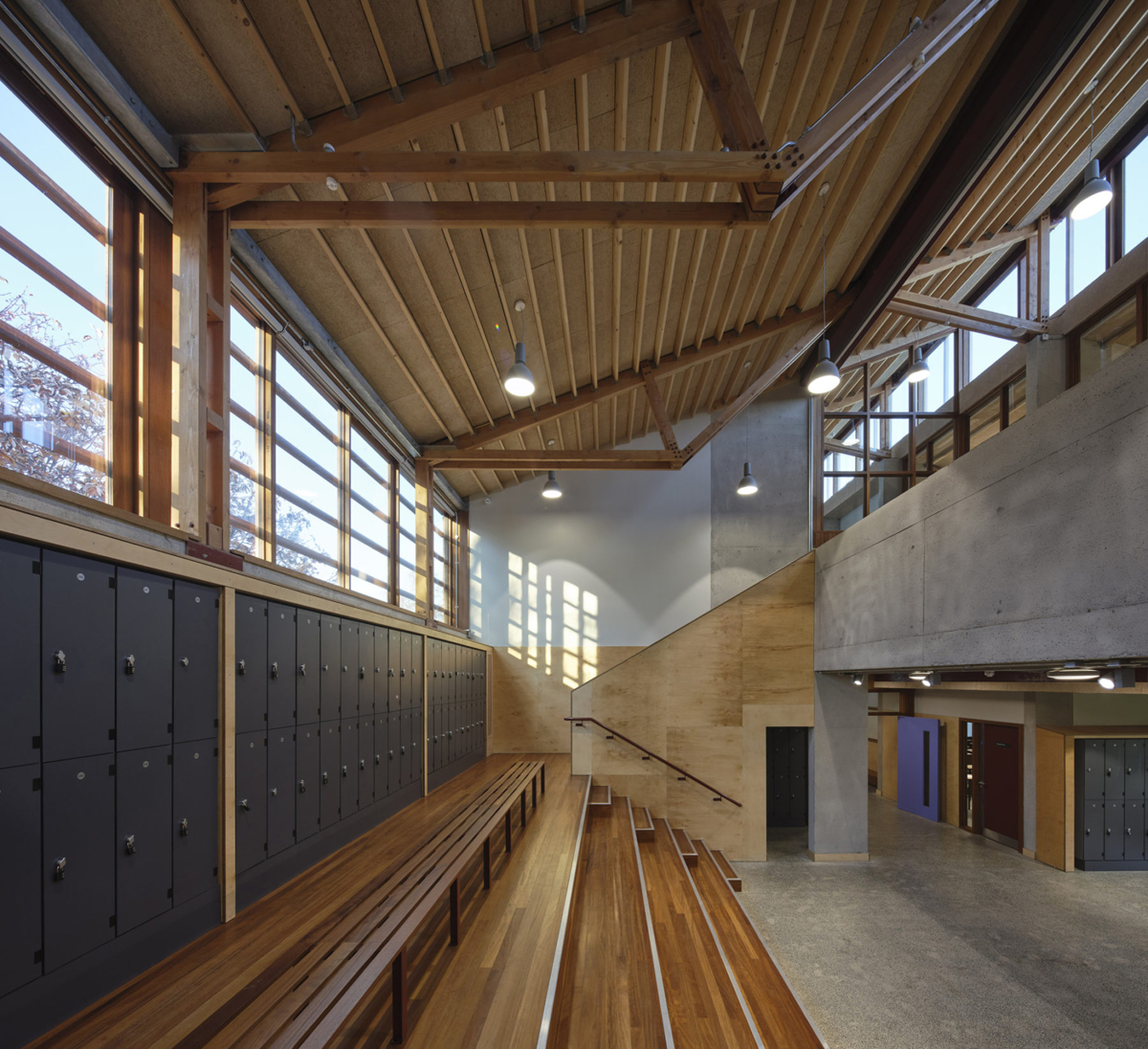 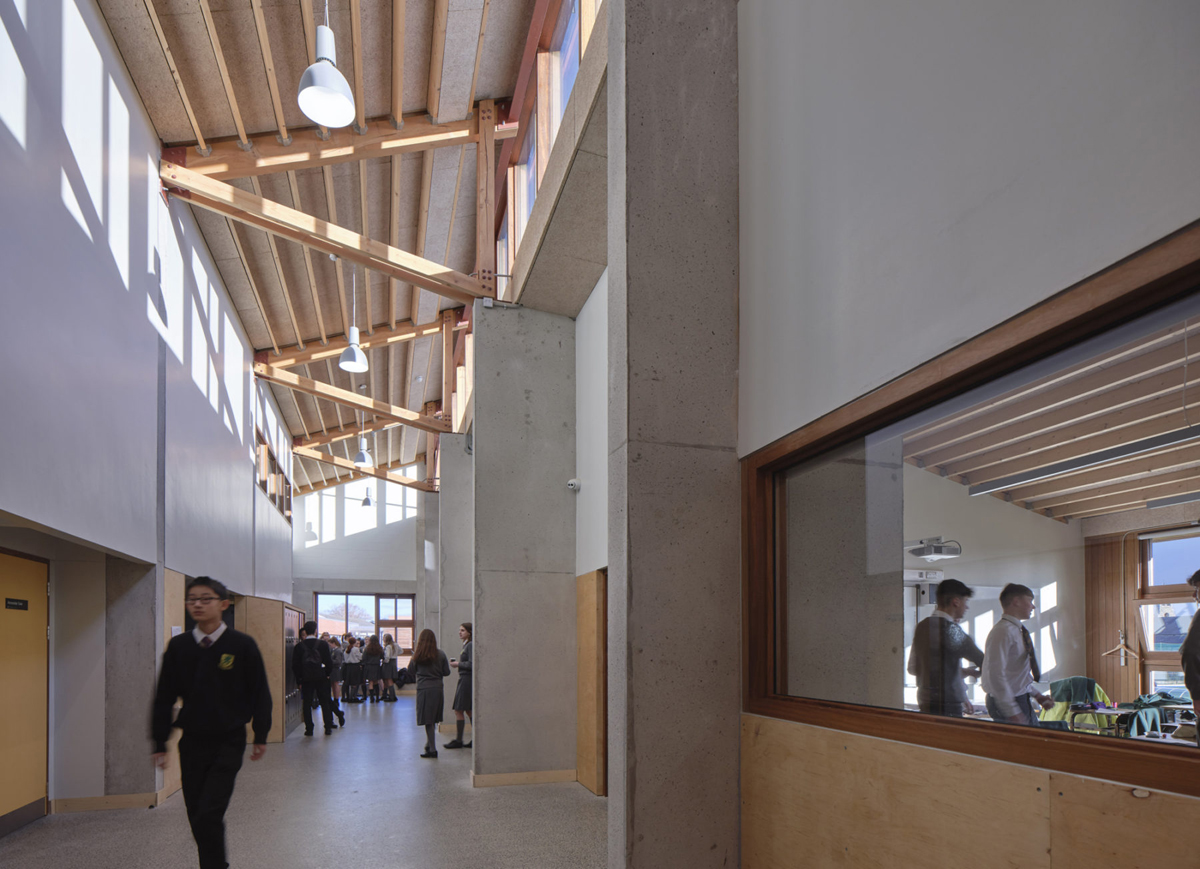 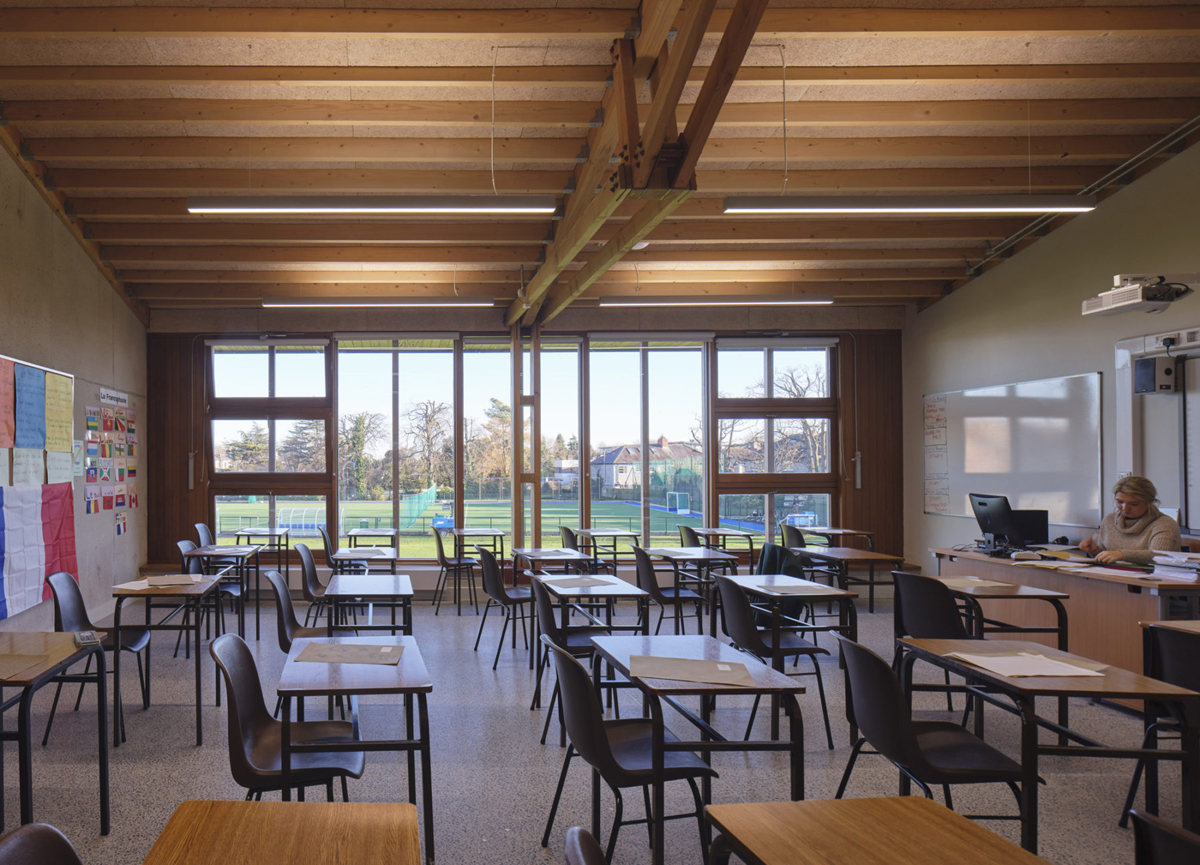 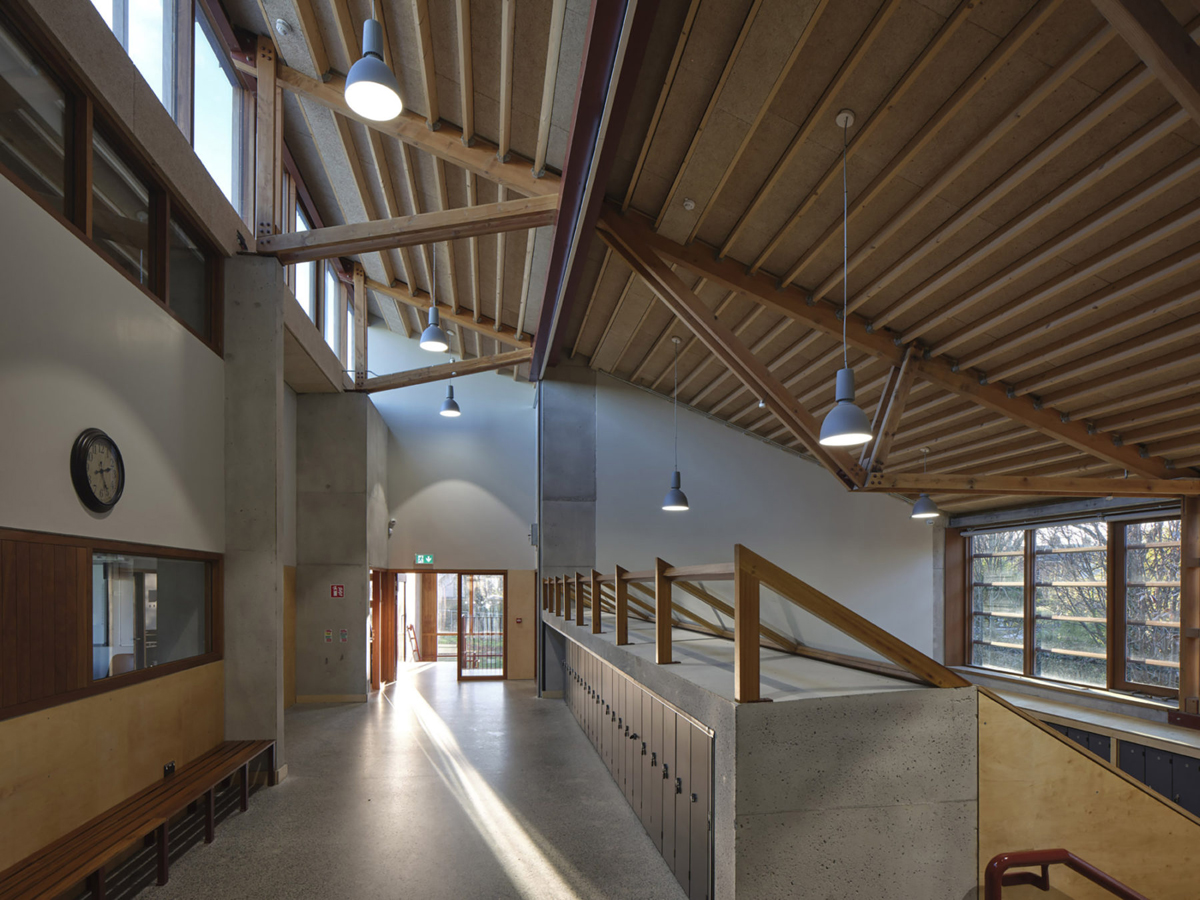 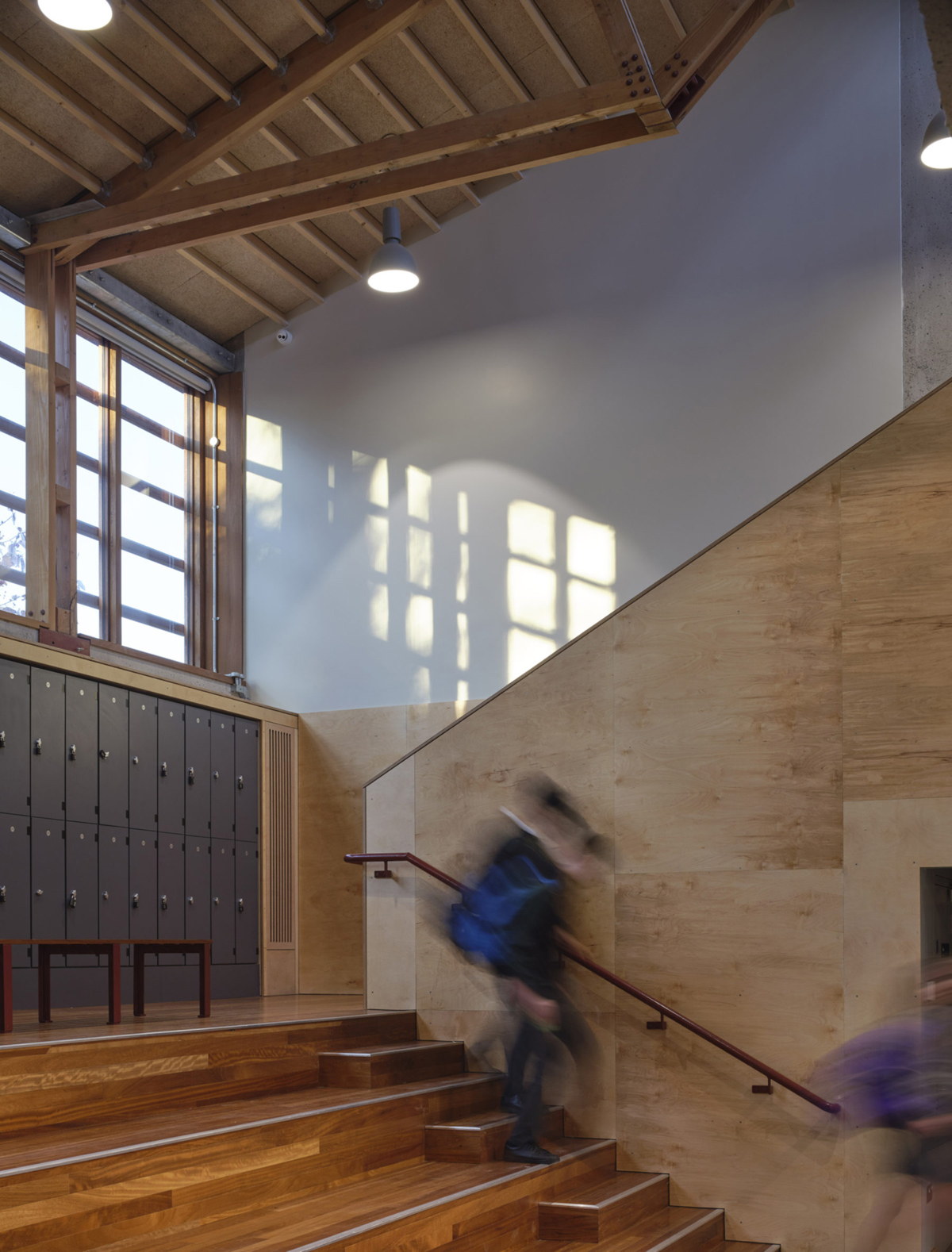 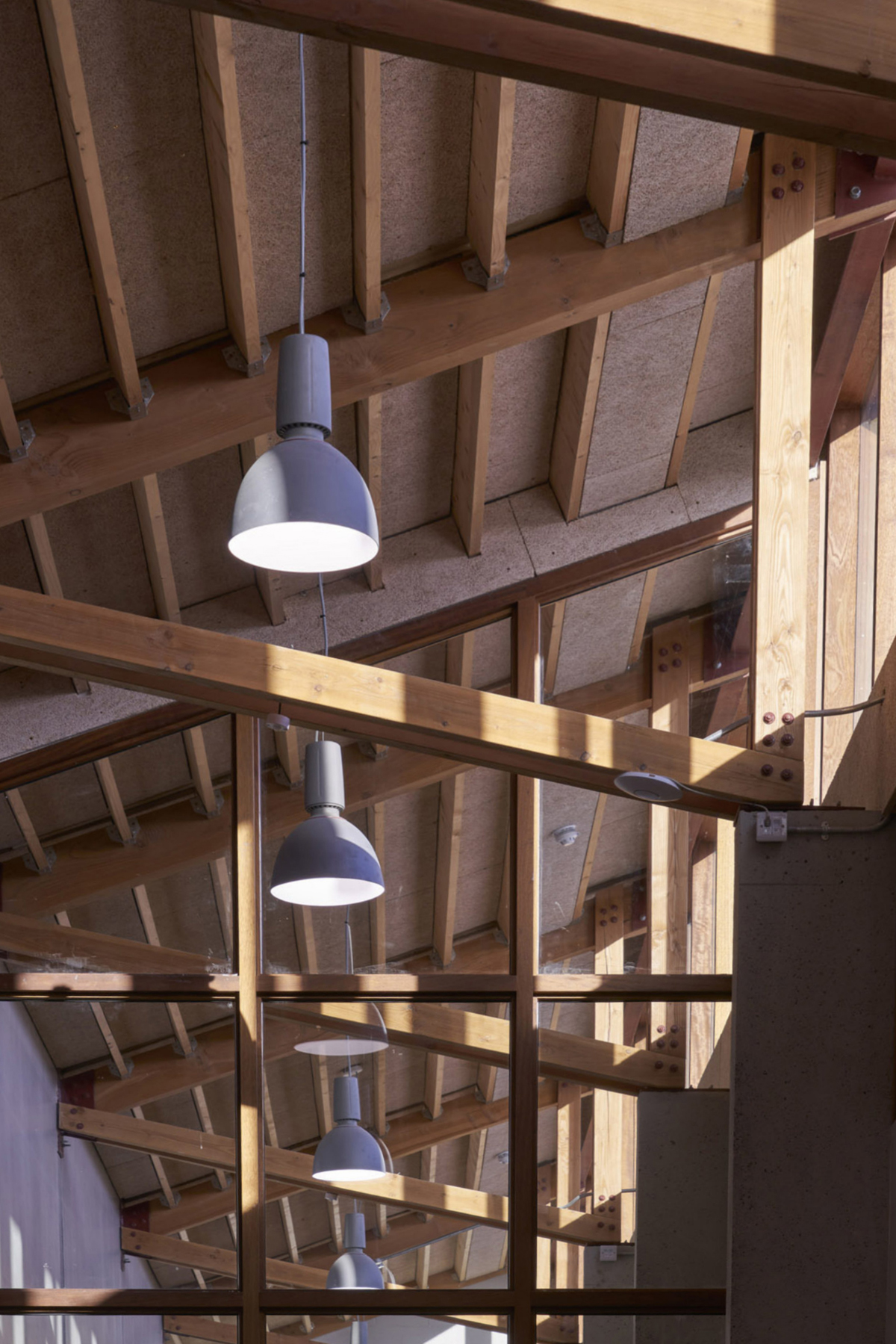 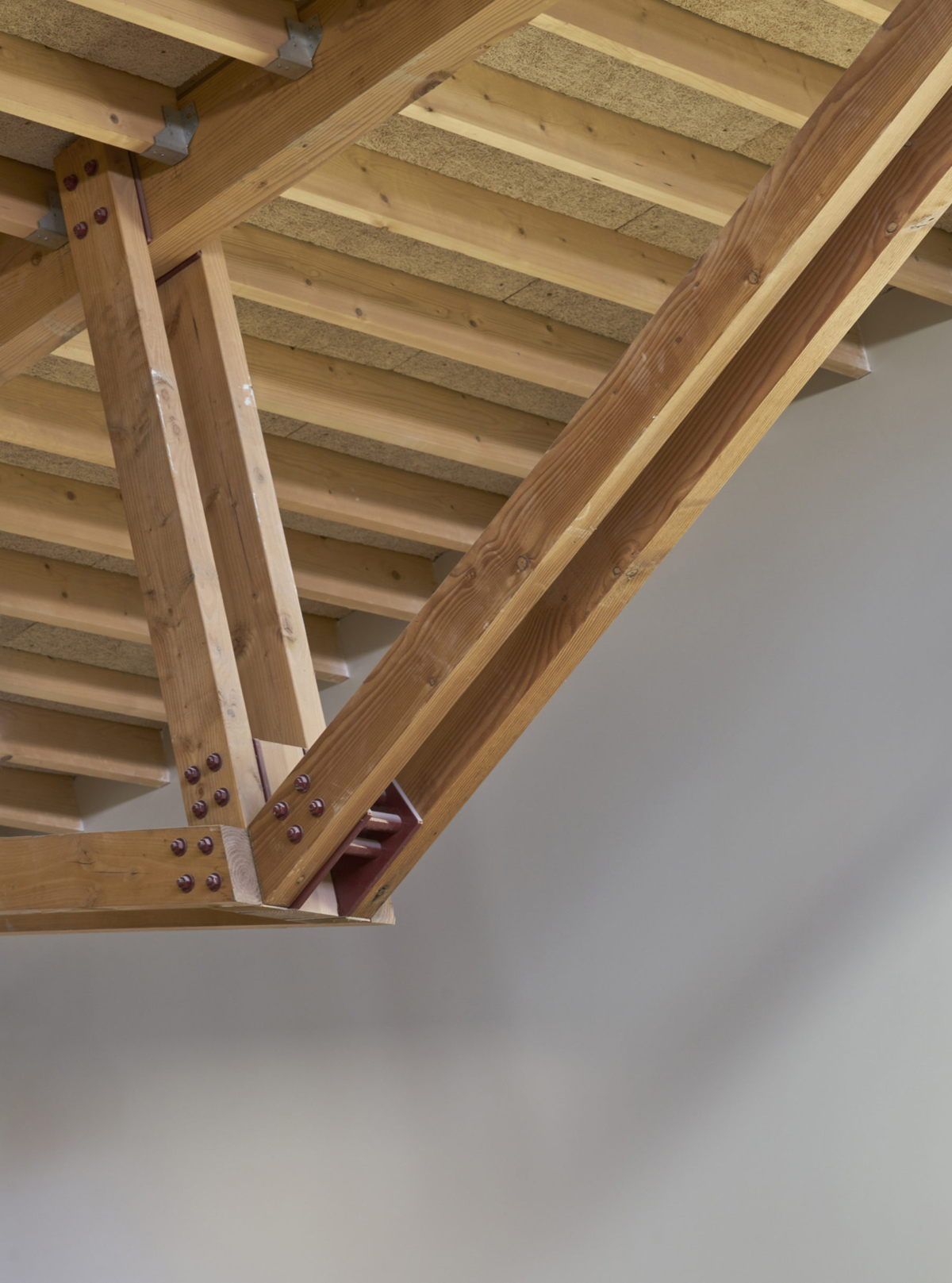