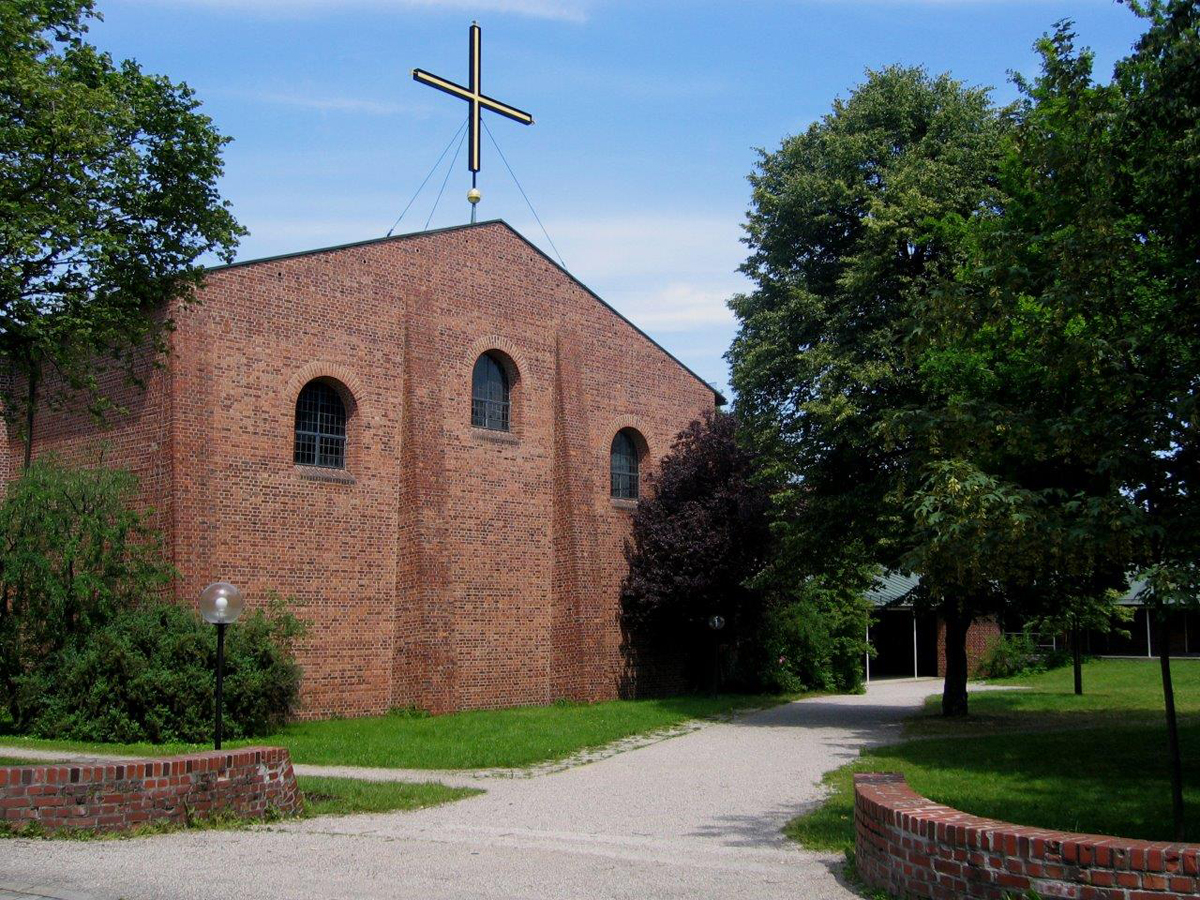 The Roman Catholic parish church of St. Laurentius in Munich’s Gern district, also known as St. Laurentius Church, was built in the mid-1950s and dedicated to St. Deacon Laurentius of Rome.  The plans for the church were designed by the architect Emil Steffann in close collaboration with the members of the Munich oratorio.

With the St. Laurentius Church, Emil Steffann masterfully realized the spirit of Franciscan simplicity, human size and liturgical aesthetics in 1955 – and implemented its idea of ​​reform around ten years before the Second Vatican Council (1962-65).

The church made of red brick is located on a side street on the Nymphenburg-Biedersteiner Canal between Paschstraße and Nürnberger Straße. There was originally an allotment garden on the site, which had to make way for church construction in 1954.

The community center is located in a hollow, so that the church, as the highest part, hardly overlooks the surrounding houses. Only the cross on the ridge describes the simple building as a church. The ensemble, connected by a covered walkway, encompasses the green courtyard. The gable roofs are covered with black-gray Eternit panels, the solid masonry shows hard-fired bricks with fine red color gradations. A wall pane picks up the visible bell.

You enter the church from the open roofed anteroom through an arched portal. Round arches also characterize the interior: As arcades, they open the lower entrance area, which is in front of a transept, to the bright celebration room. The altar is surrounded by the benches in a horseshoe shape. The fourth page closes the circle with the place of the chief on the triple-tiered altar island. The inner walls are slurried in white, the pillarless ceiling shows light blue spruce boards in a herringbone pattern. Clearly glazed arched windows open on the narrow sides of the parish room above a zone of pre-vaulted arches. The tabernacle is found on an altar on the front wall of the entrance area. Not far away, steps lead down to the baptistery.

The floor plan has clear basic elements: rectangle and (semi-) circle as a round arch. To the semicircular conche in the west, the parish room lies in a transverse rectangle in the east, which (if you add the entrance area) comes close to a square. The baptistery is attached to the northeast on a U-shaped floor plan.

The architectural design of the interior with the altar in the middle and the rows of benches facing it from three sides, with the priest facing the parish, was new for the time and anticipated the requirements of the liturgical reform of the Second Vatican Council. It served as a model for many new church buildings. 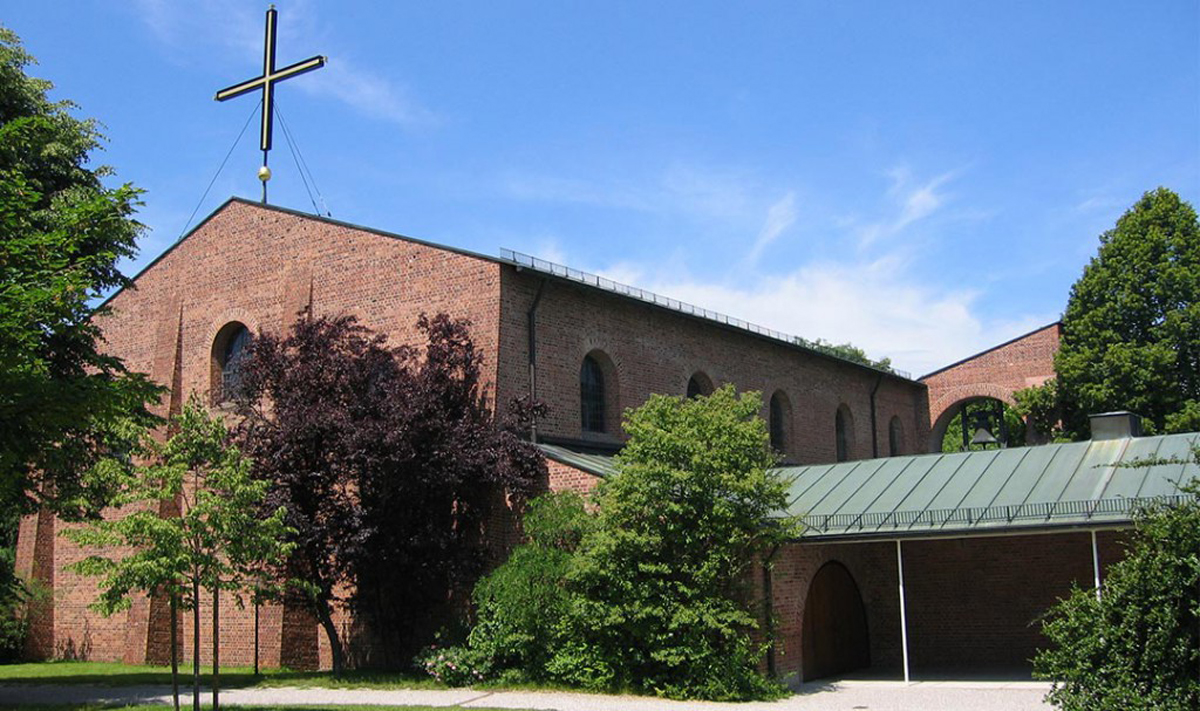 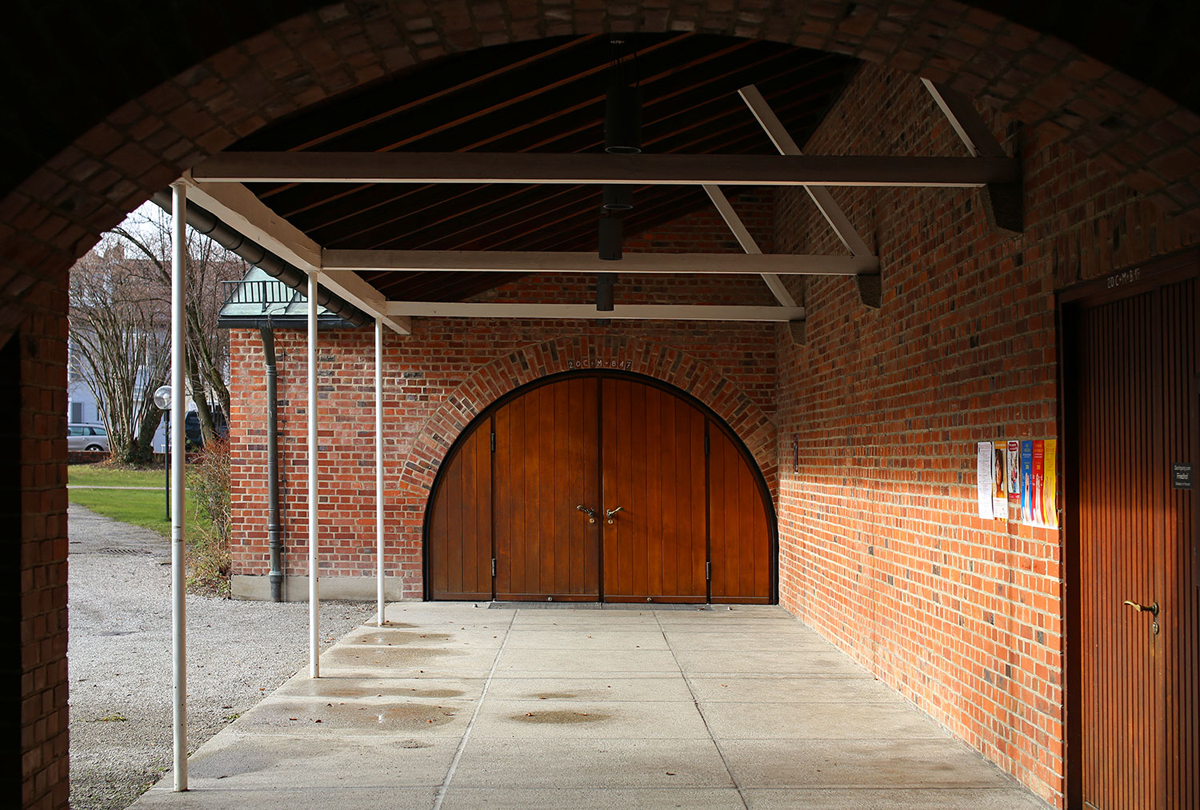 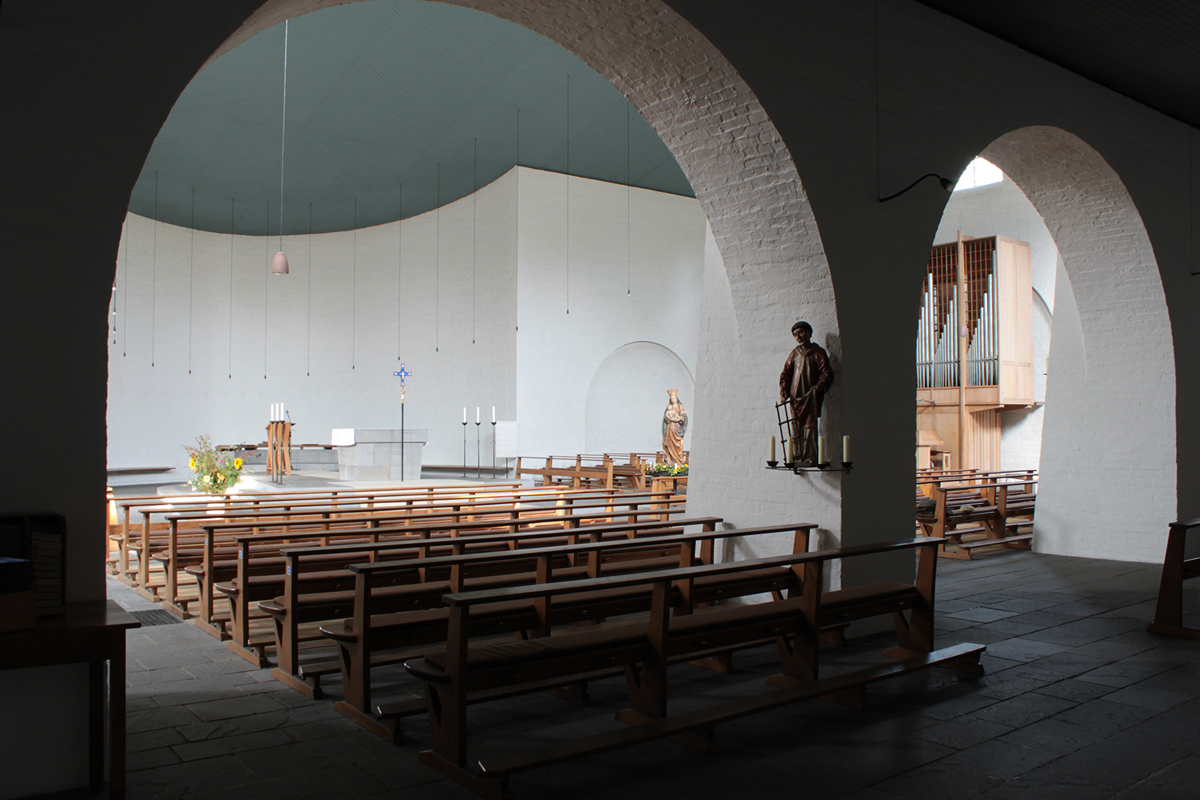 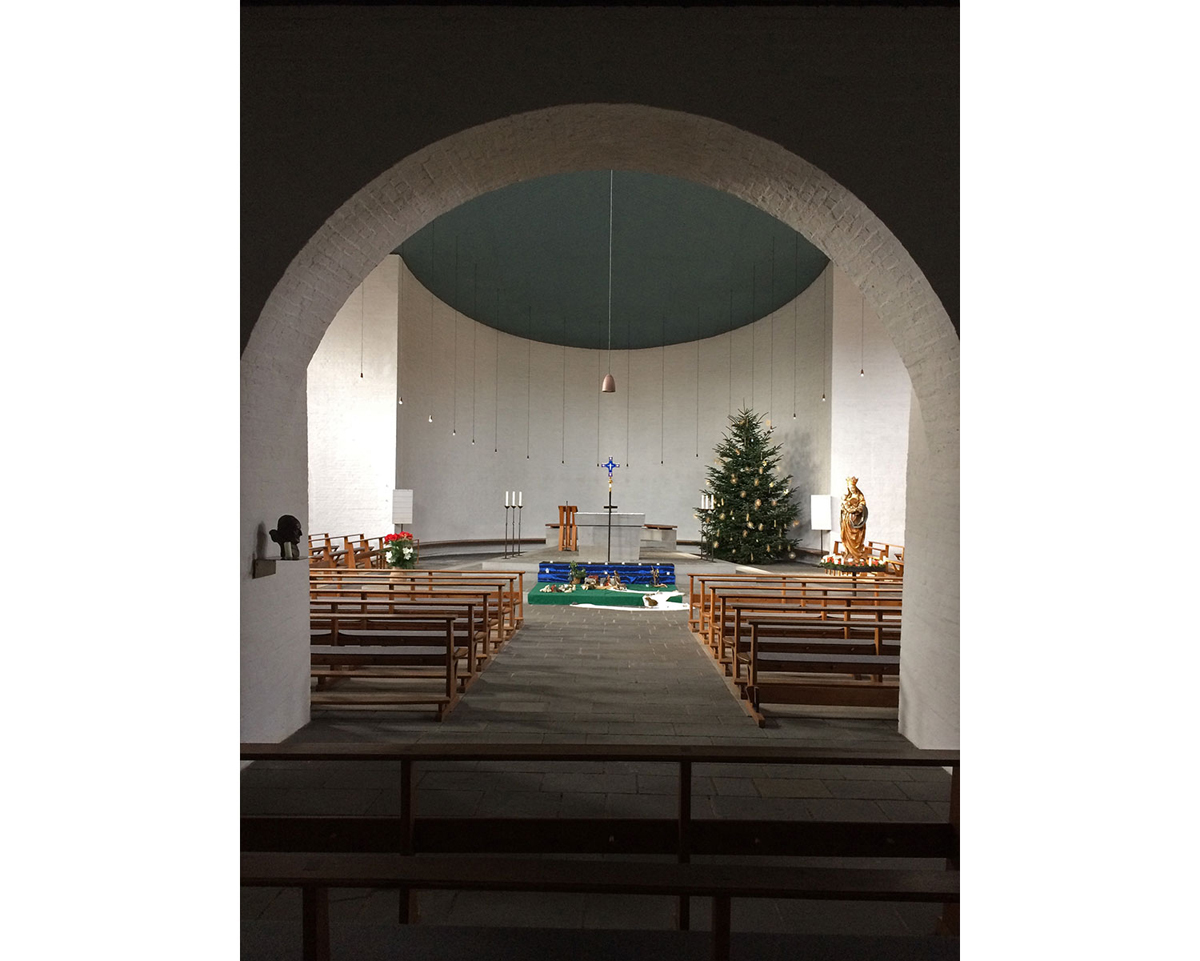 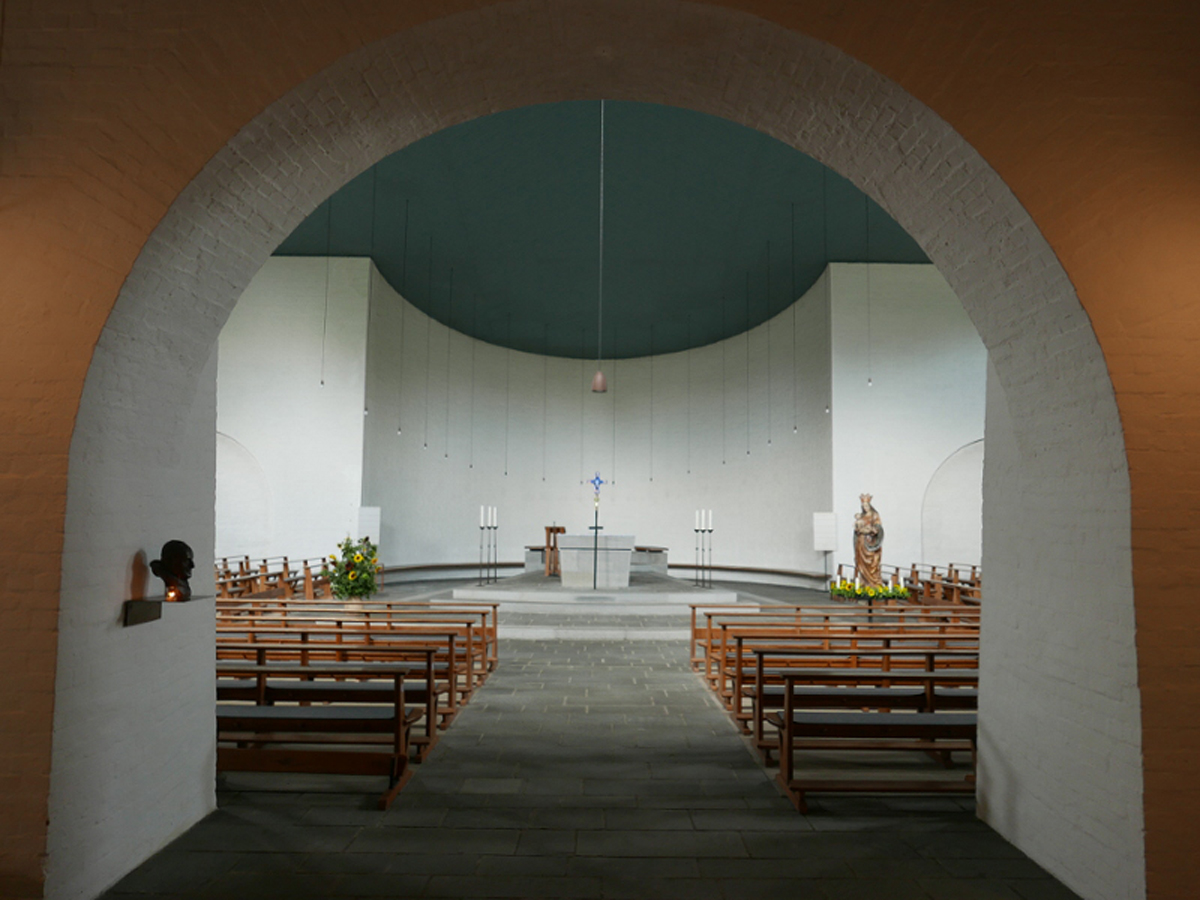 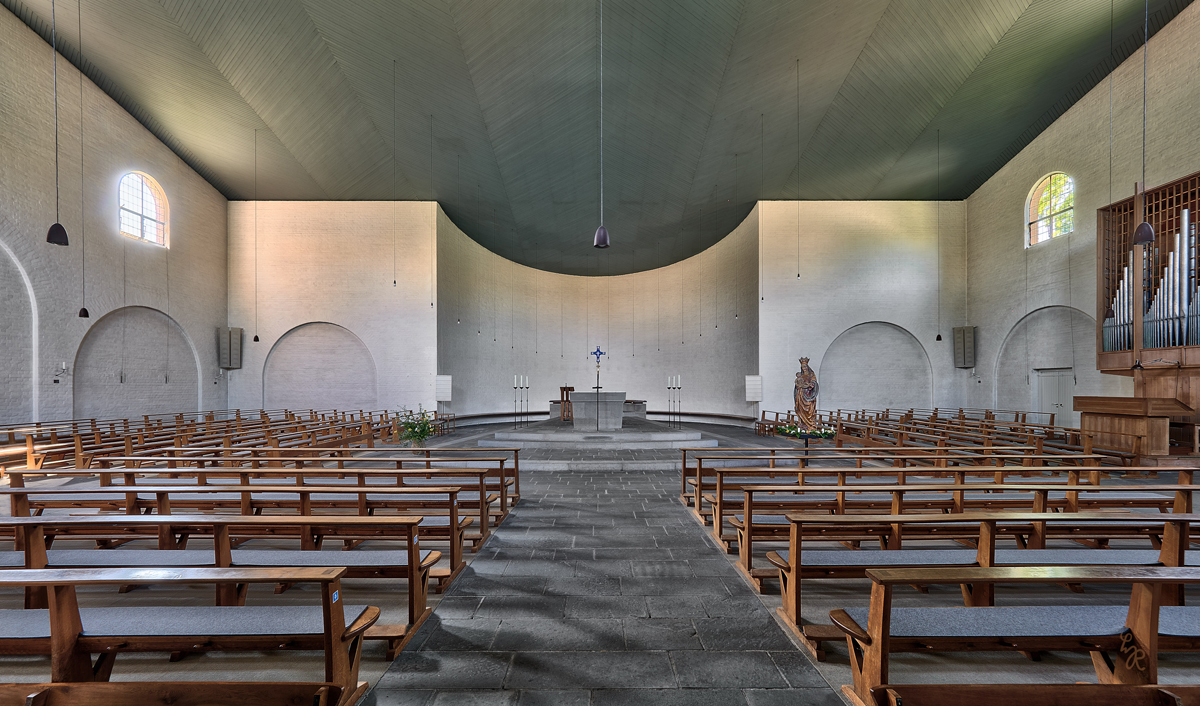 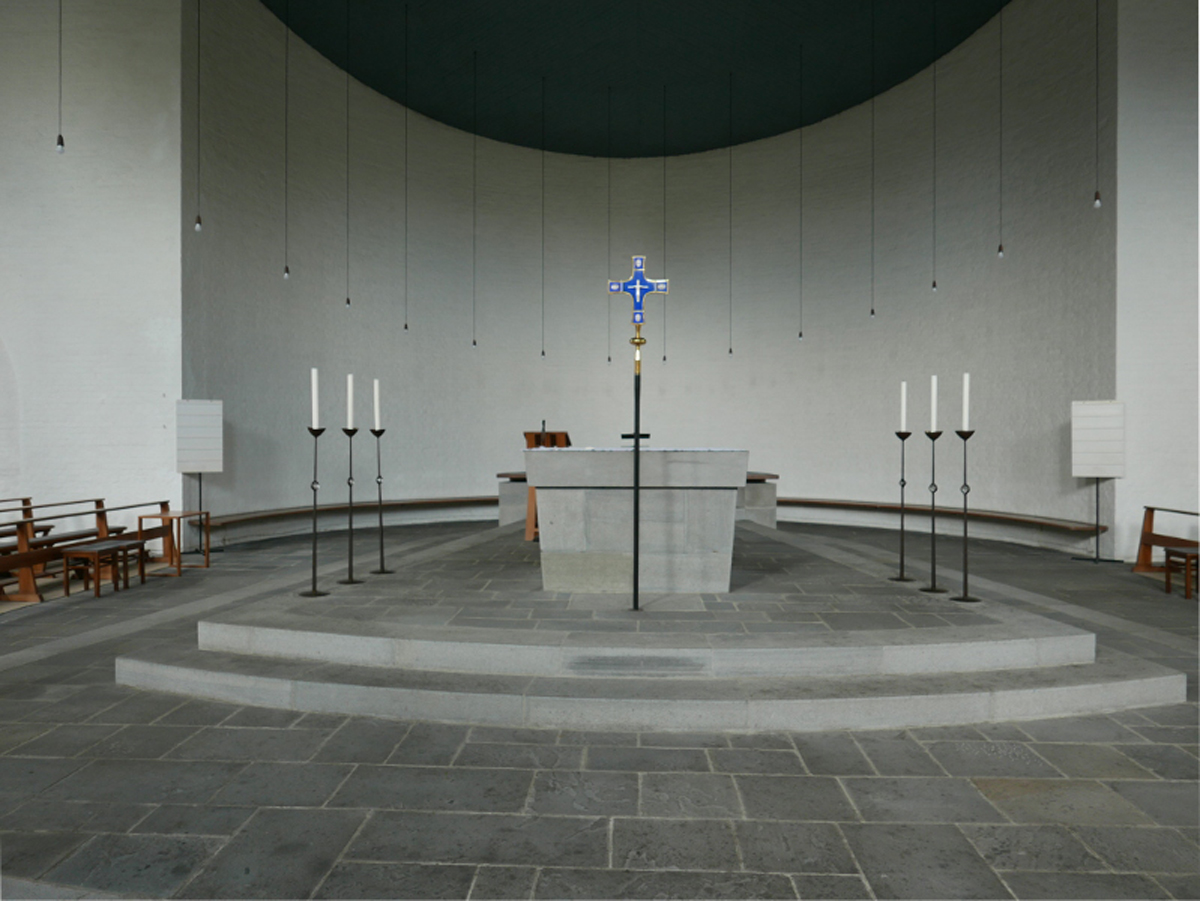 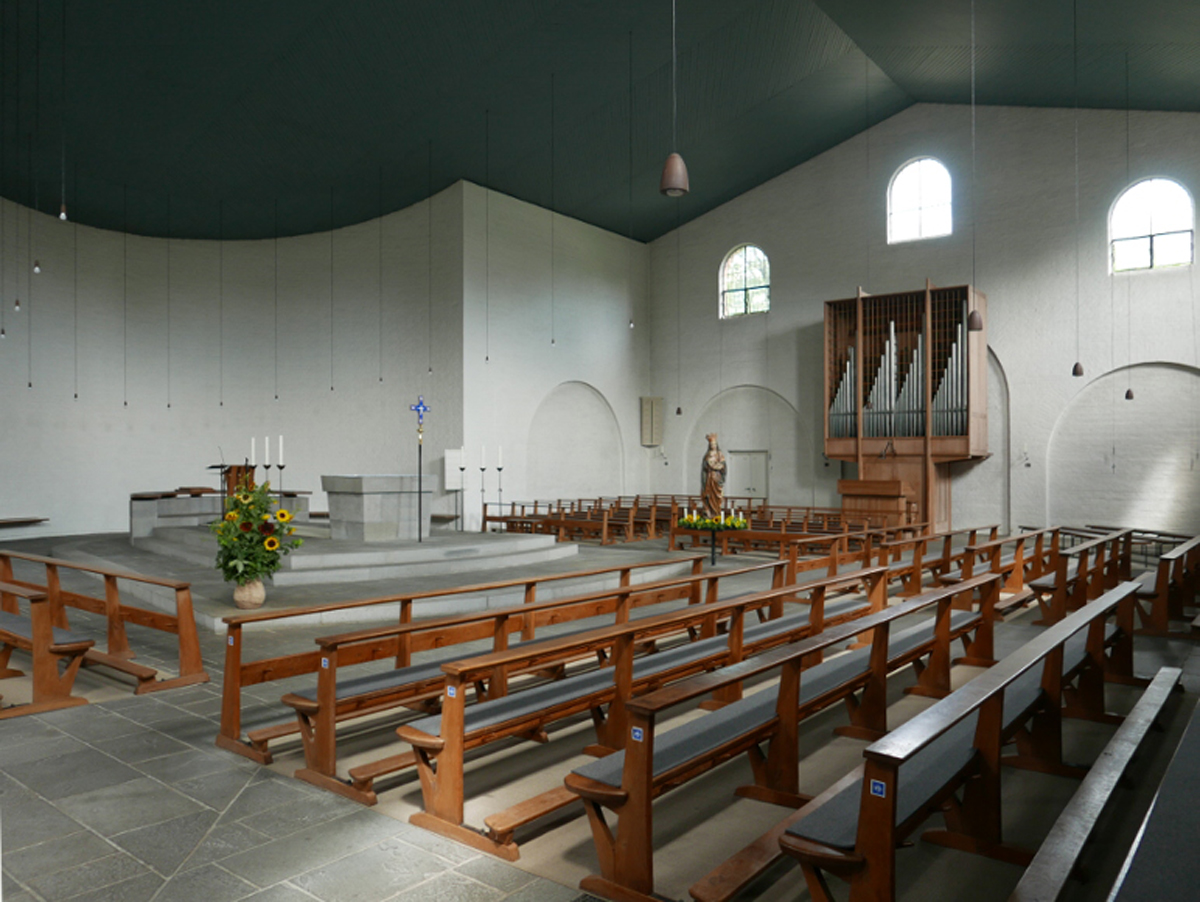 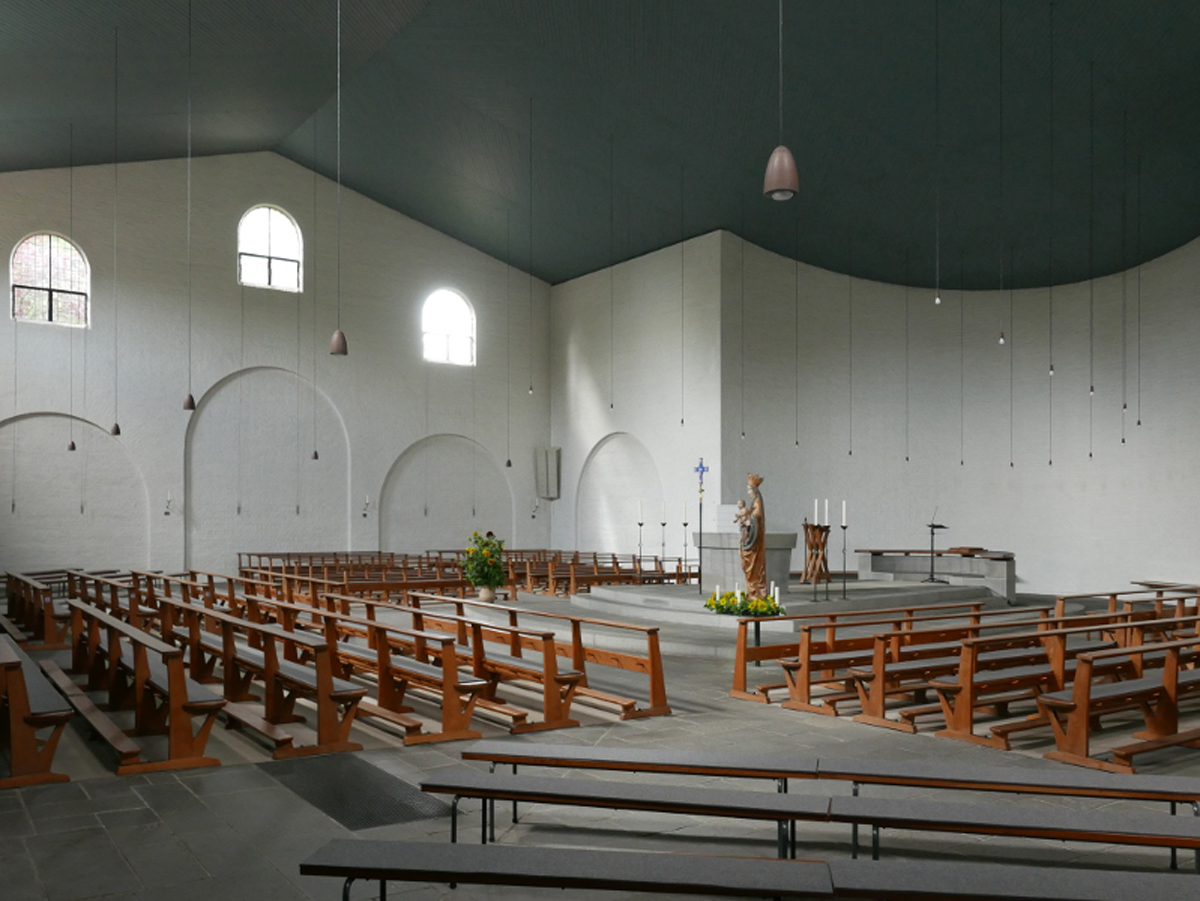 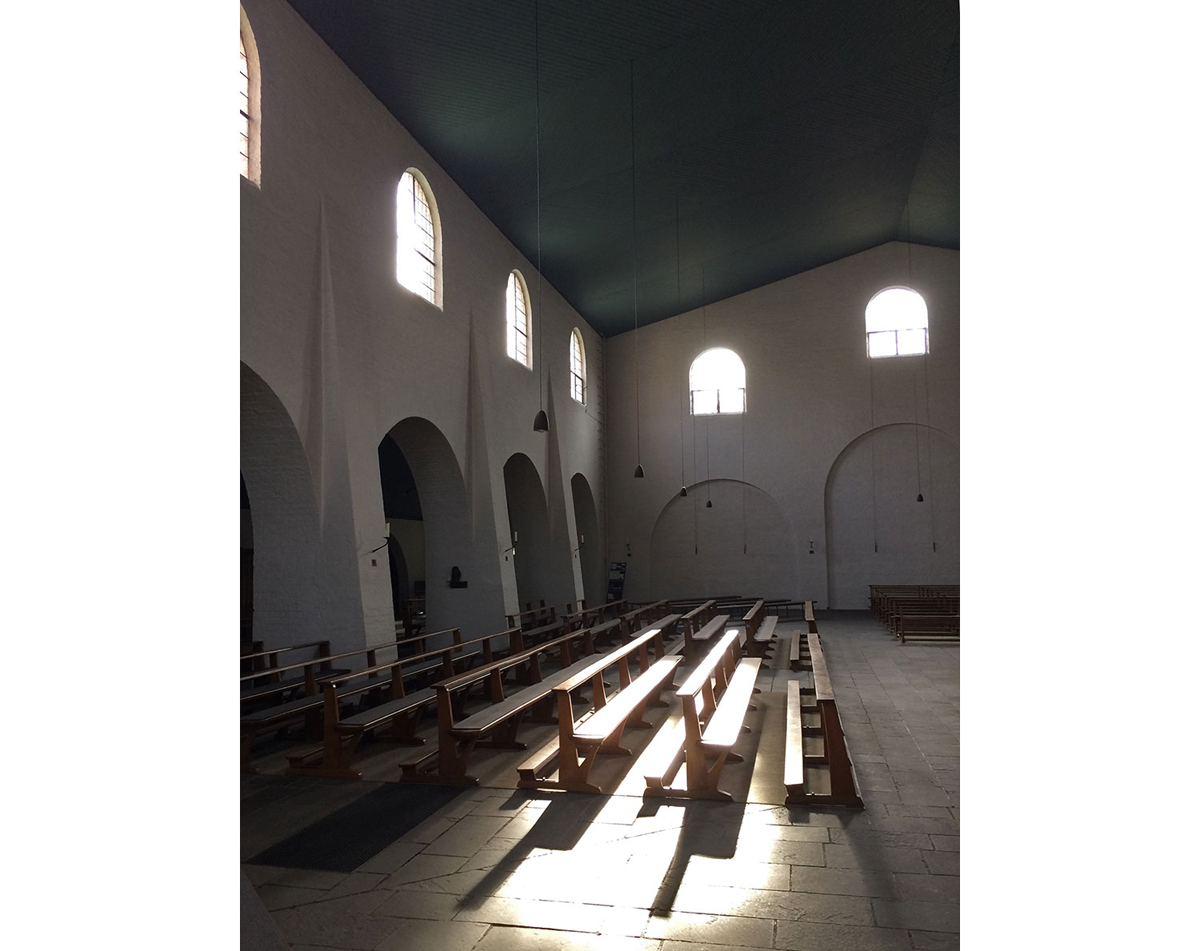 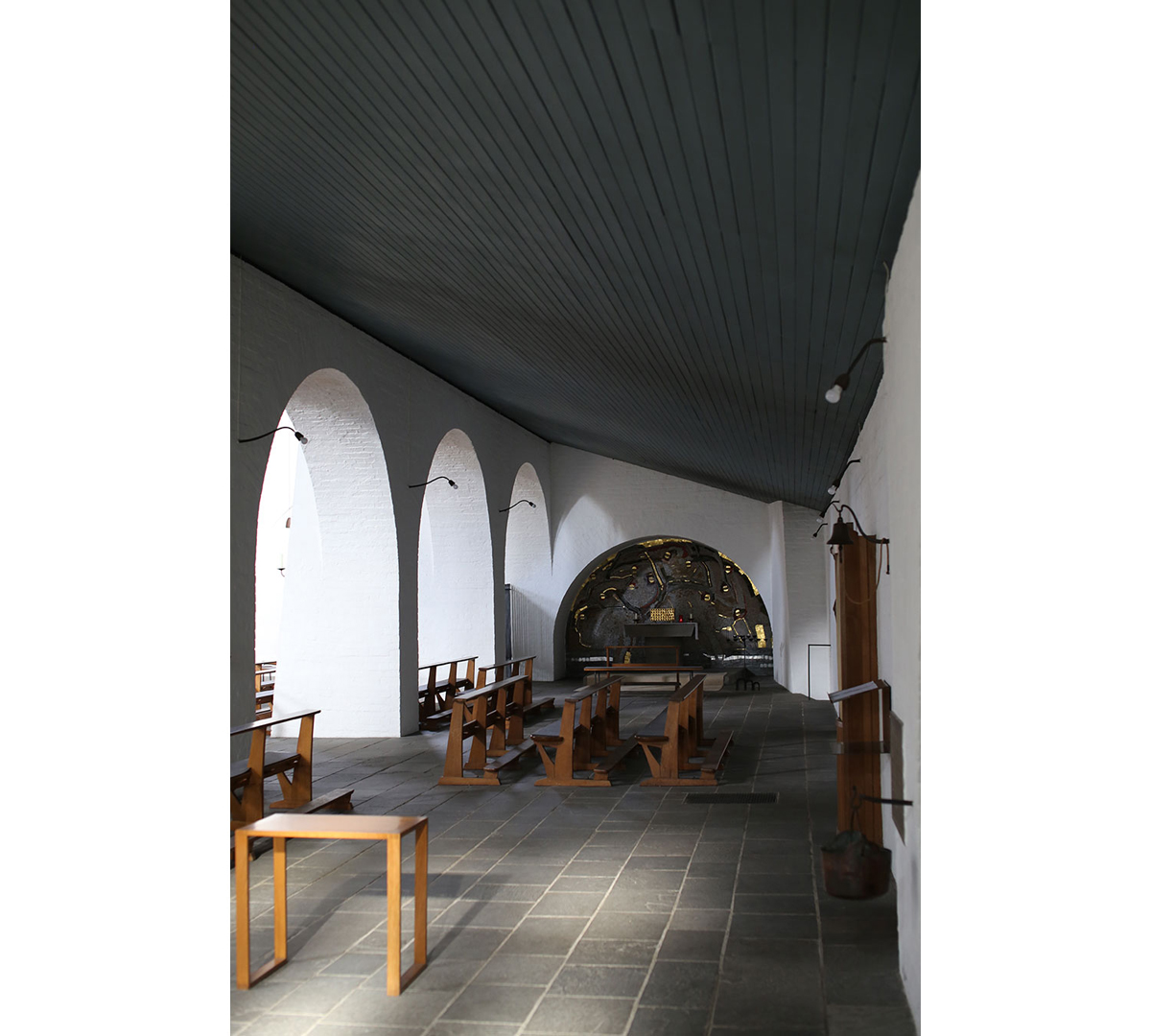 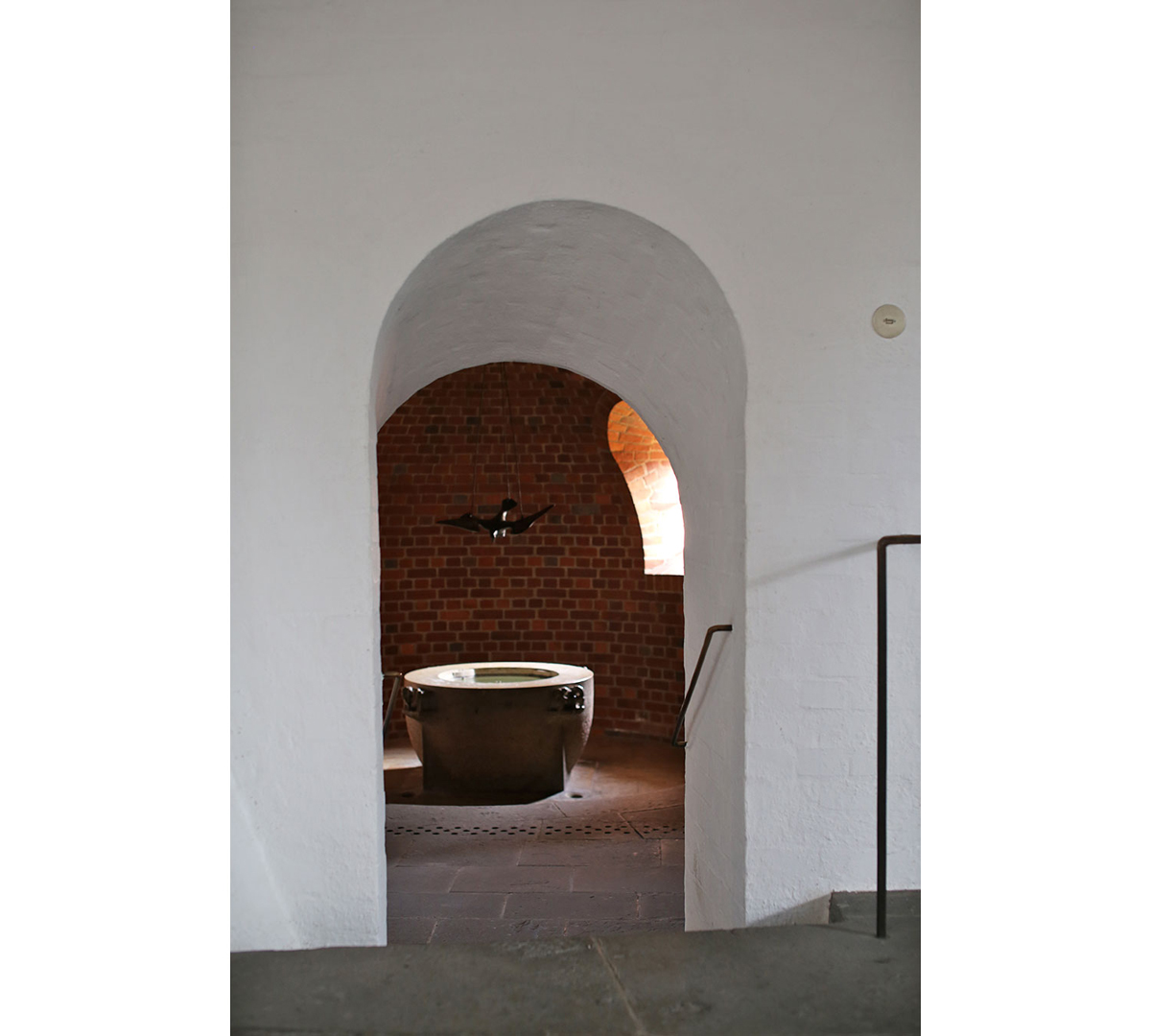 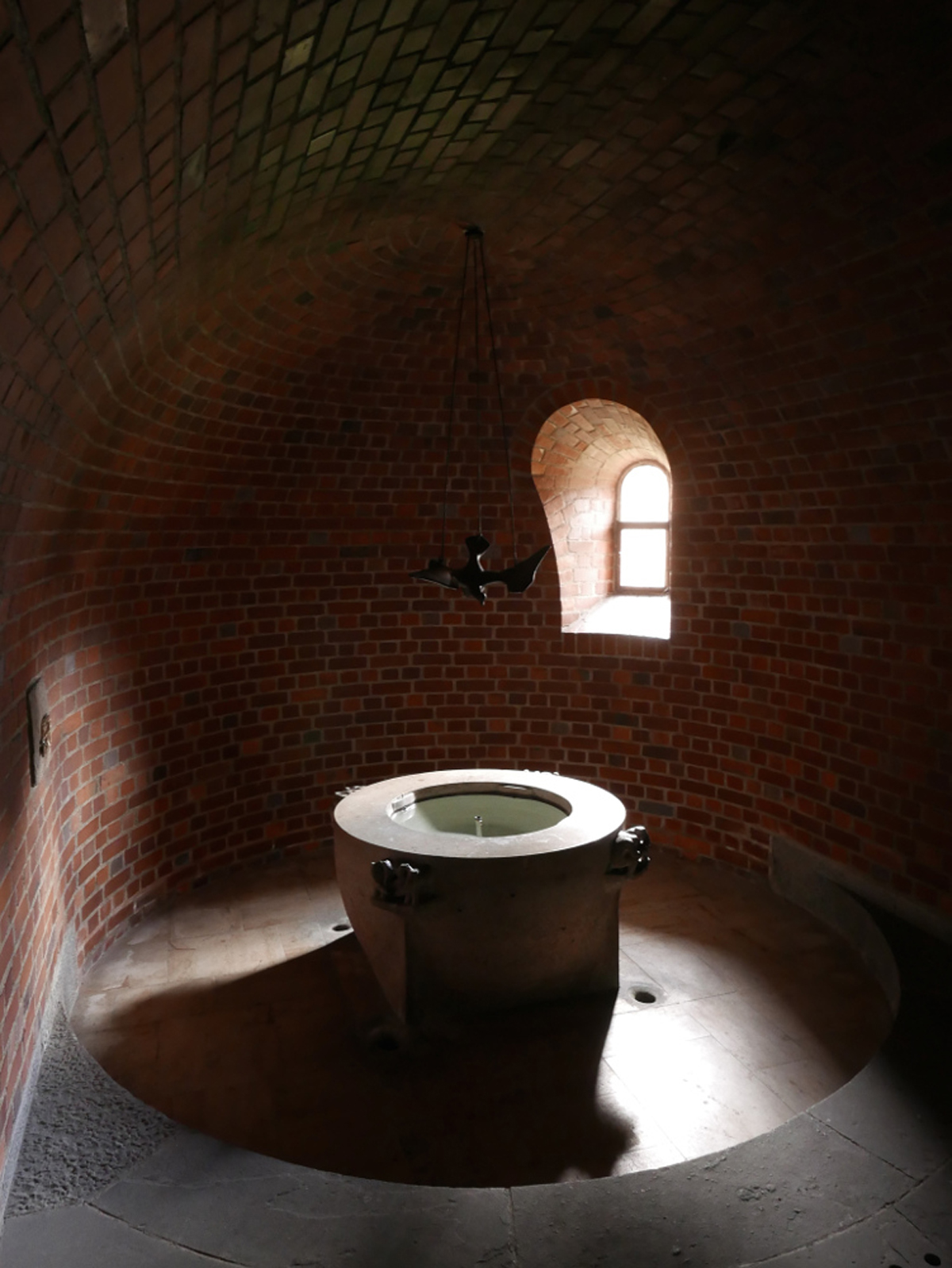 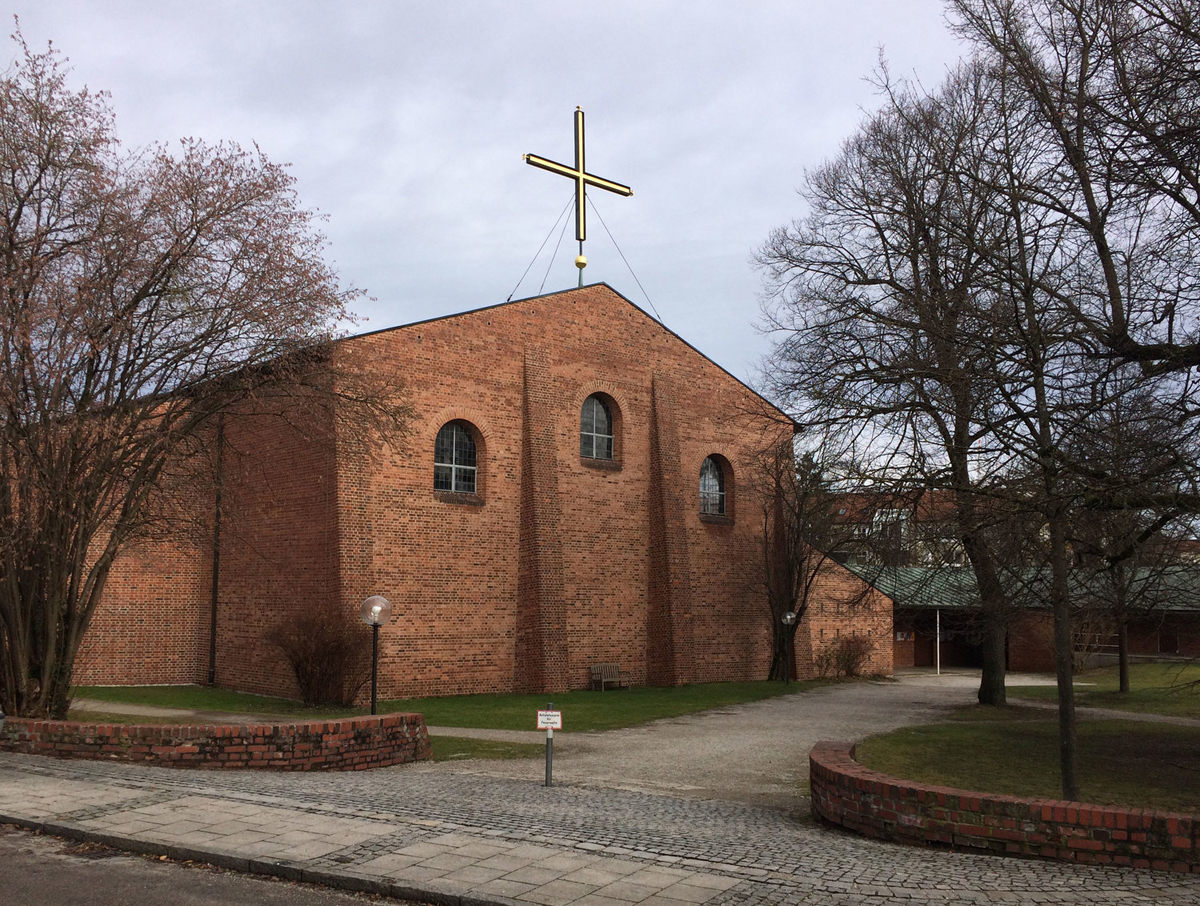 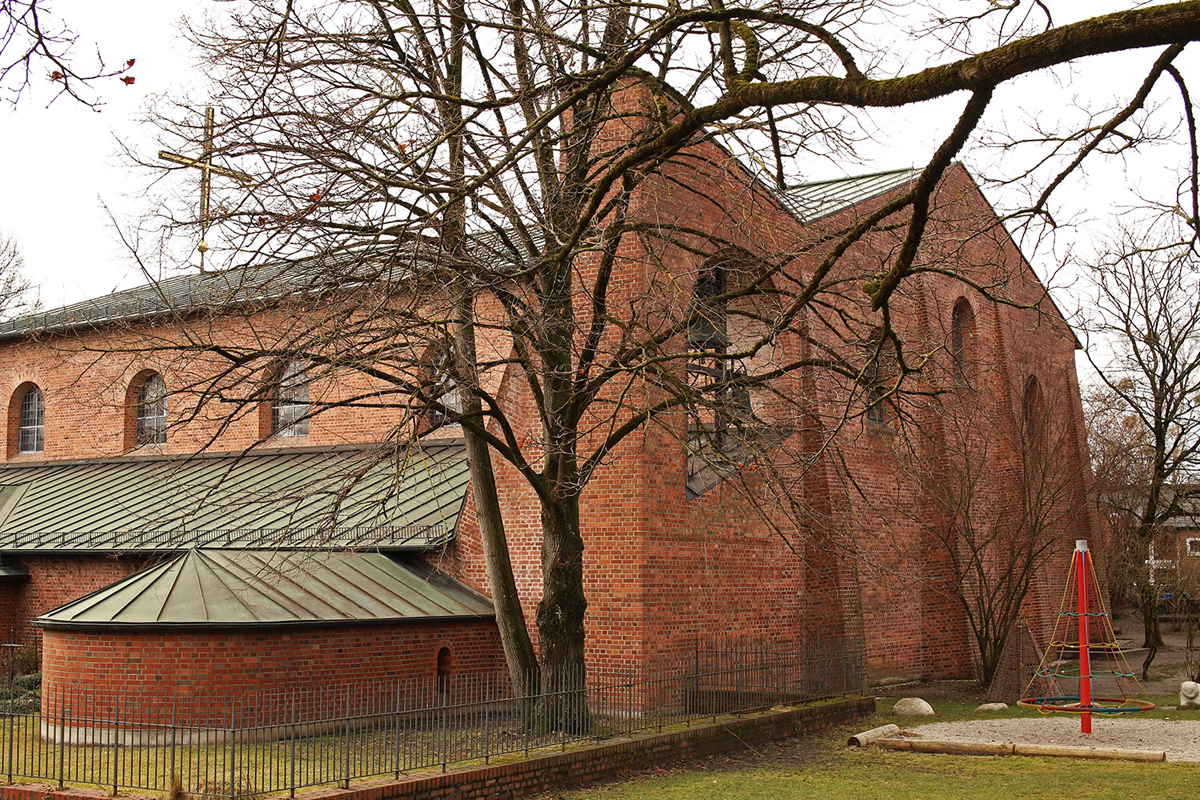 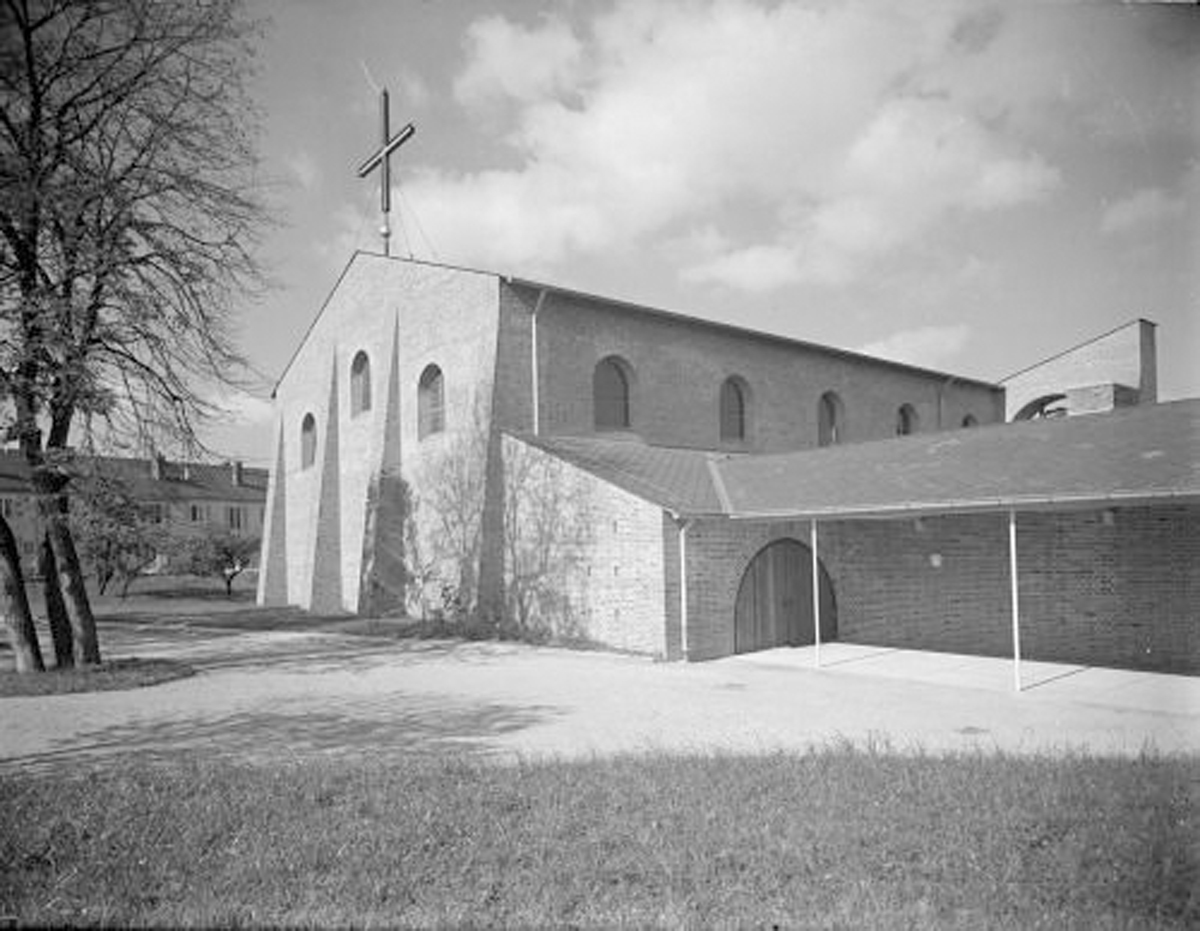