The architectural potential of memory
As an architect, there has always been the will to clarify the fundamental theme of my occupation; architecture as a palimpsest. I believe that architecture predominantly is a cultural profession which involves people, a historical continuity and the making of a physical realm. Prior to my thesis I had developed a method of conceiving architecture. Rather than making projects through the application of a single “problem-crushing” strategy, I had become interested in a much more tactical approach anchored in a multilayered understanding of context, semantics and phenomenology. I found that this way of working would allow for my projects to develop a mature and self-evident whole, open to ambiguous interpretations. After carefully studying a place it would eventually open itself up and offer a tangible inventory of possibilities. Certain material juxtapositions subtly referred to historical meanings. Like an unfinished piece of a woven textile the place would give hints of how it might be continued to be woven onto. I was intrigued by the idea that a place contained distant and collective memories waiting to be recalled – perhaps this was the very quality that gave it its “placeness”.

The site I chose for my thesis was a collection of out-of-use buildings from the late 1800s. They had been constructed as a metalware factory just outside the old city center of Copenhagen where the encircling defensive wall had just been abolished. The site was resting like a quiet witness to the dramatic expansion of the city which came as a consequence of the much denser population spawned by the industrialization of Europe. I found it interesting to develop a connection between the original purpose of the building: the craft of metalware, and how it could inform the addition of a new building. The programmatic part of the project was put into the background, as the existing buildings had proven to be very tolerant to the various needs of the inhabitants that had occupied the buildings ever since the factory shut down.

As part of my studies I understood that the making of metalware required a broad palette of techniques. Among them was melting, rolling, casting and hammering. I wanted to give this understanding presence in every addition I would make on the site. This meant that the door handle, for instance, became a particularly interesting part of the project. It represented the handshake of the building and by de-coding it you would understand the building in a deeper sense. I digitally designed the door handle and 3D-printed it in a rough manner where the layering of plastic had a visible presence immediatly felt when touched. The printed plastic prototype was used as the positive form in the making of a negative sand-form in which I casted the finished bronze door handle, complete with all the traces of the prototype. In a semantic way you could argue that a connection between a truly ancient craft and highly contemporary technology had been made. It seemed to be a suitable way for someone to greet this specific building.

The existing buildings were constructed of brick, mortar, and a variation of steel and timber beams and columns – typical tectonics of the time. Concerning the construction of the new building on the site I found it intriguing to apply a similar “typical” contemporary construction method. I decided to work with precast concrete elements that would produce loadbearing pillars in the facade from where slabs would be carried onto an in-situ cast concrete core. In plan, this solution produced a way of making space that was very similar to the existing found spaces – they felt well-known despite being in fact new and unknown. For the cladding of the structural elements I experimented with the ubiquituous fibre-reinforced concrete – only I added a powderized copper aggregate prior to the casting. This physically meant that the narrative of the site had now been embodied in the new building. As time would go by, the fibre-concrete panels would weather. The cement grey colour will acquire a verdigris patina, as a result of the oxidation of the copper aggregate. The further away in time the “narrative origin” of the project would seem, the more presence it would gain in the physical world.

The project was made with the expectation that an in-depth study of a place, its existing building stock and all the ambiguities that time deposits in a place is able to appoint new building techniques and poetic opportunities in future construction. Here in was my primary errand: the wickering of the standardized and the specialized. 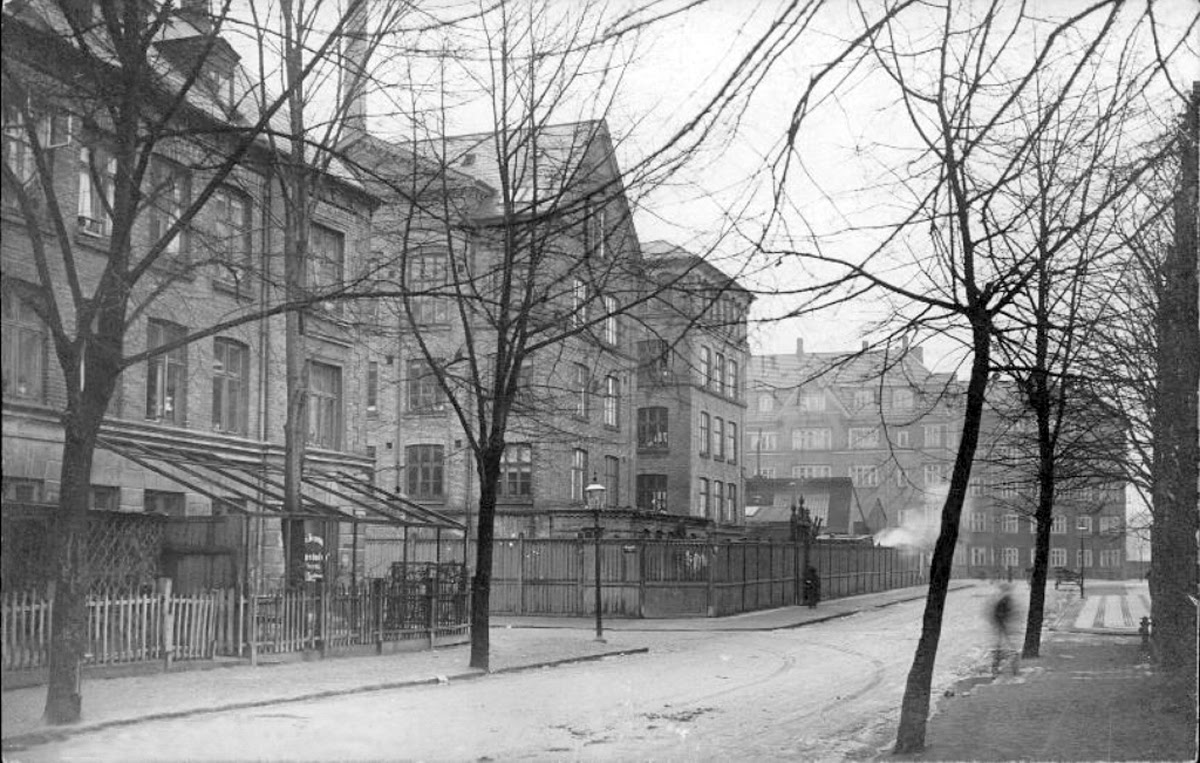 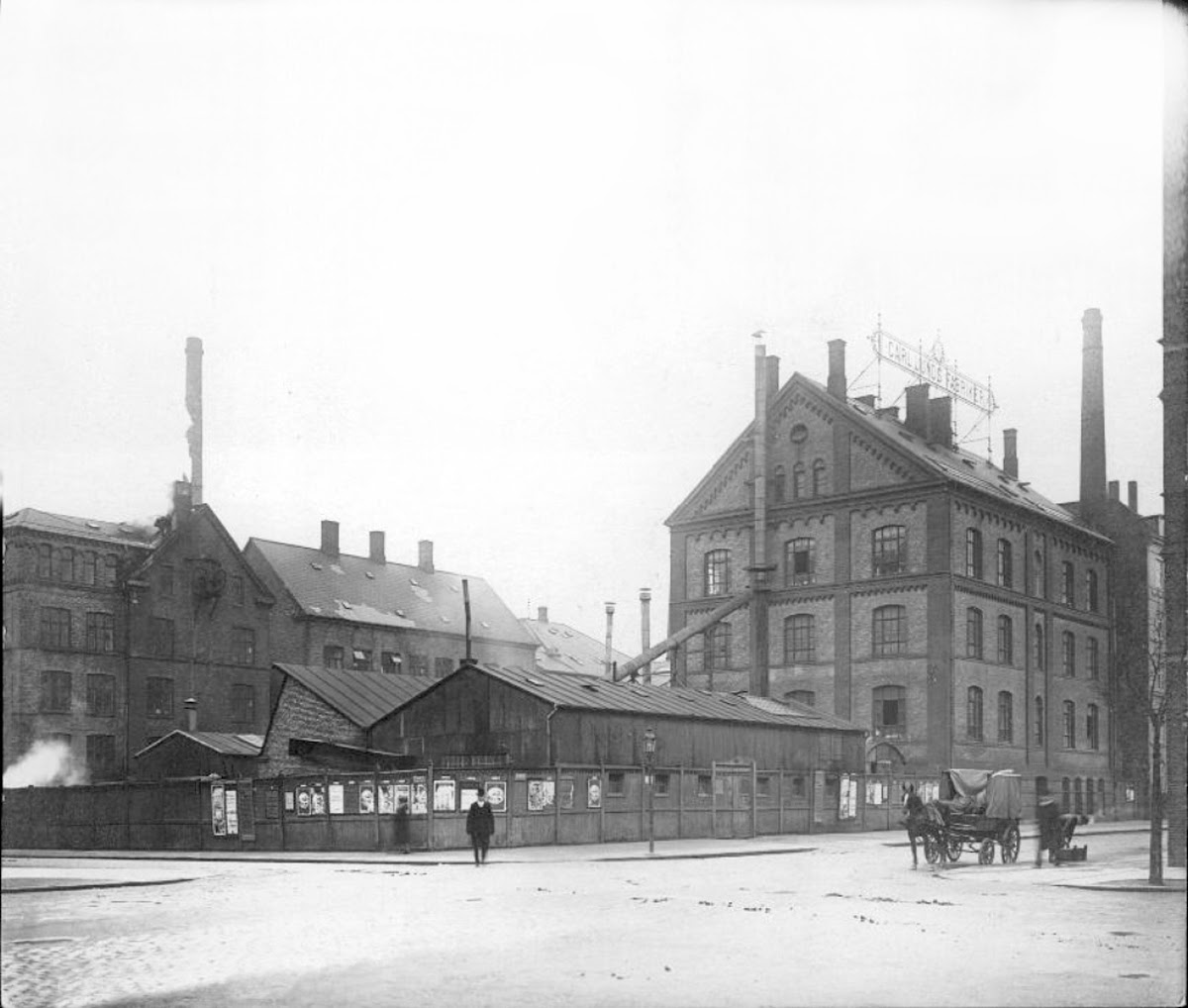 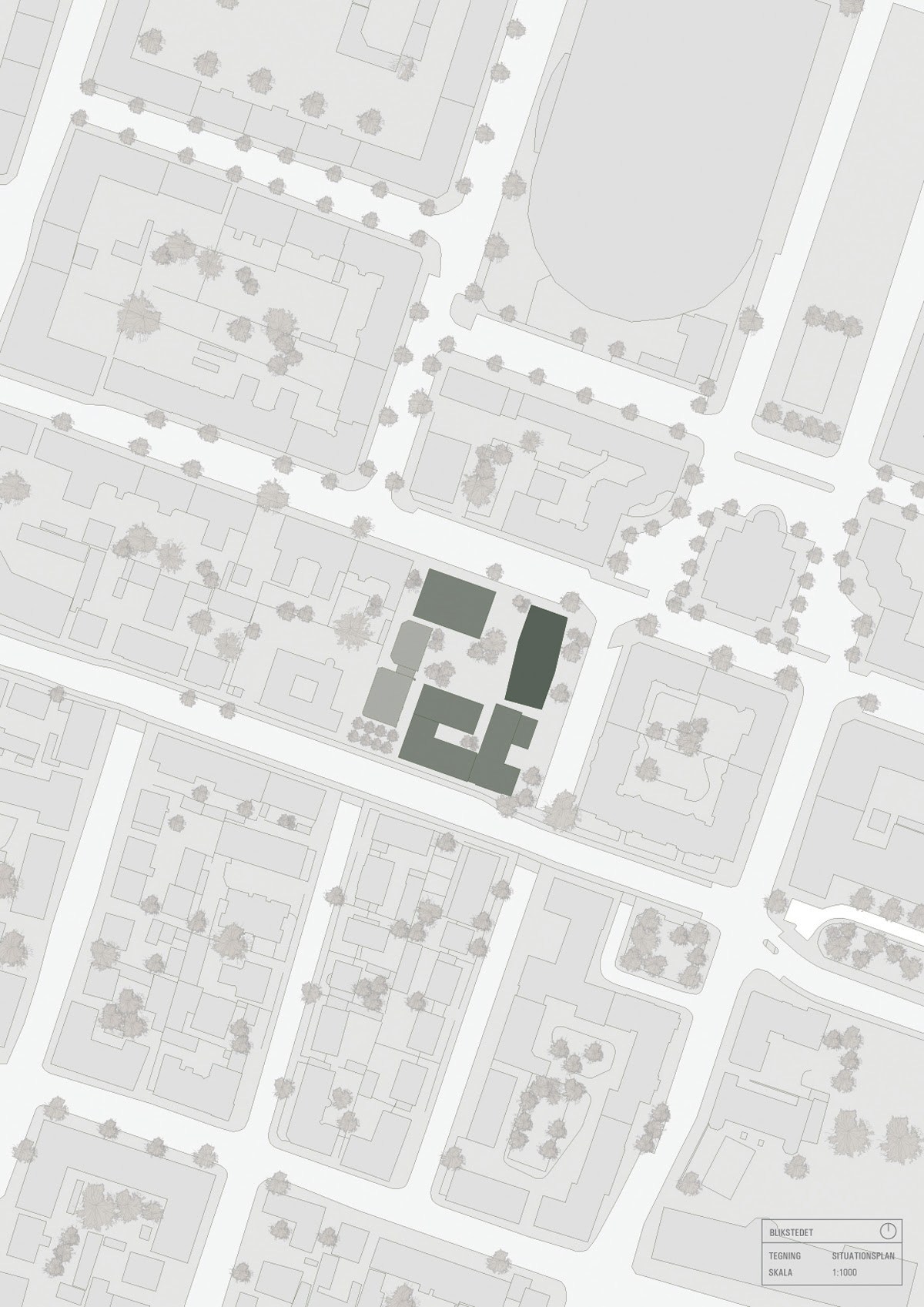 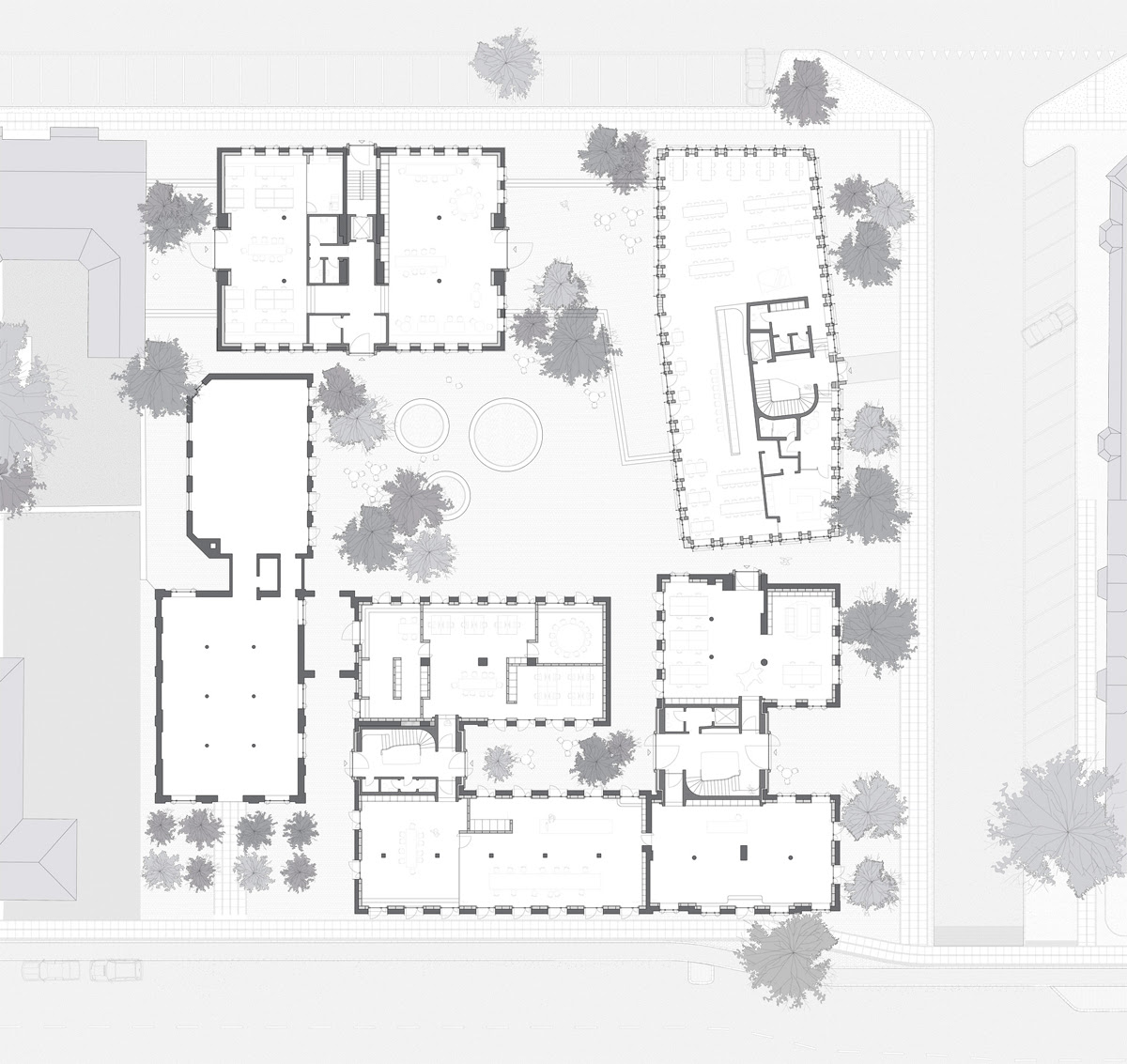 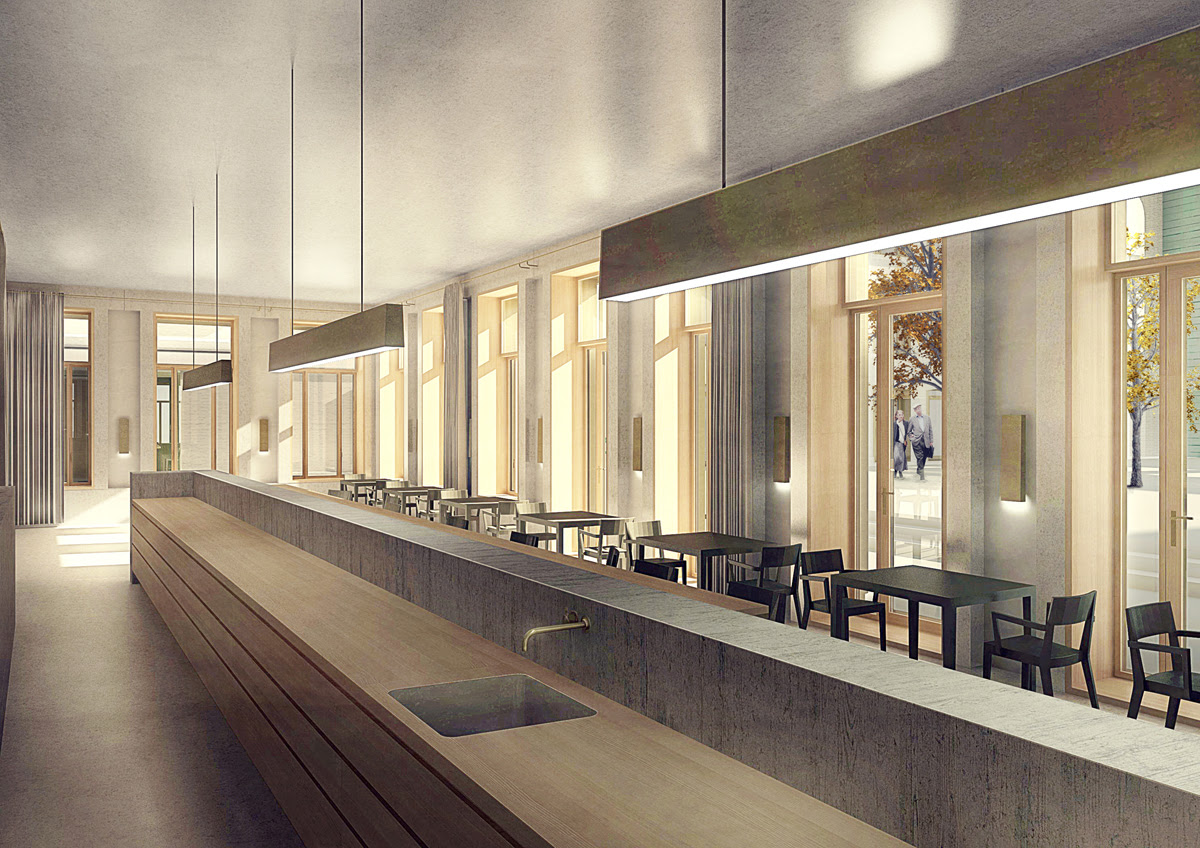 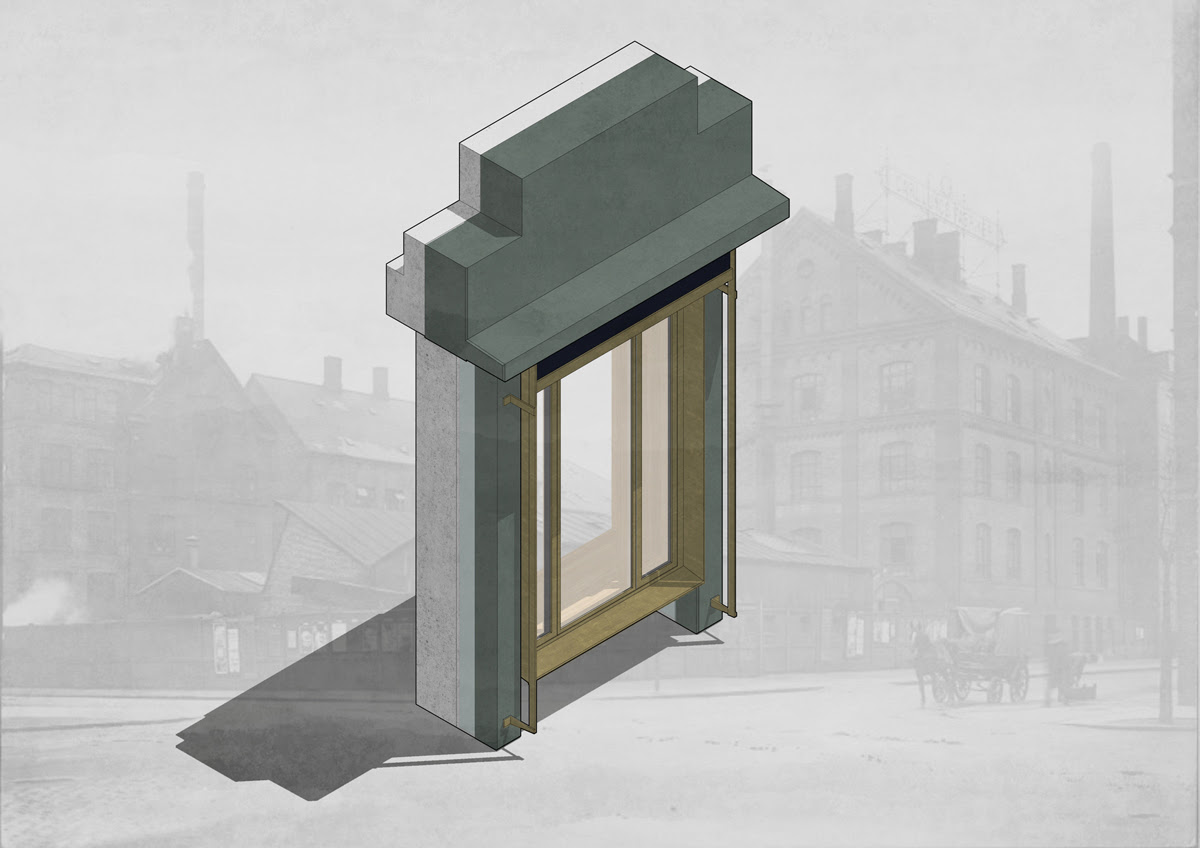 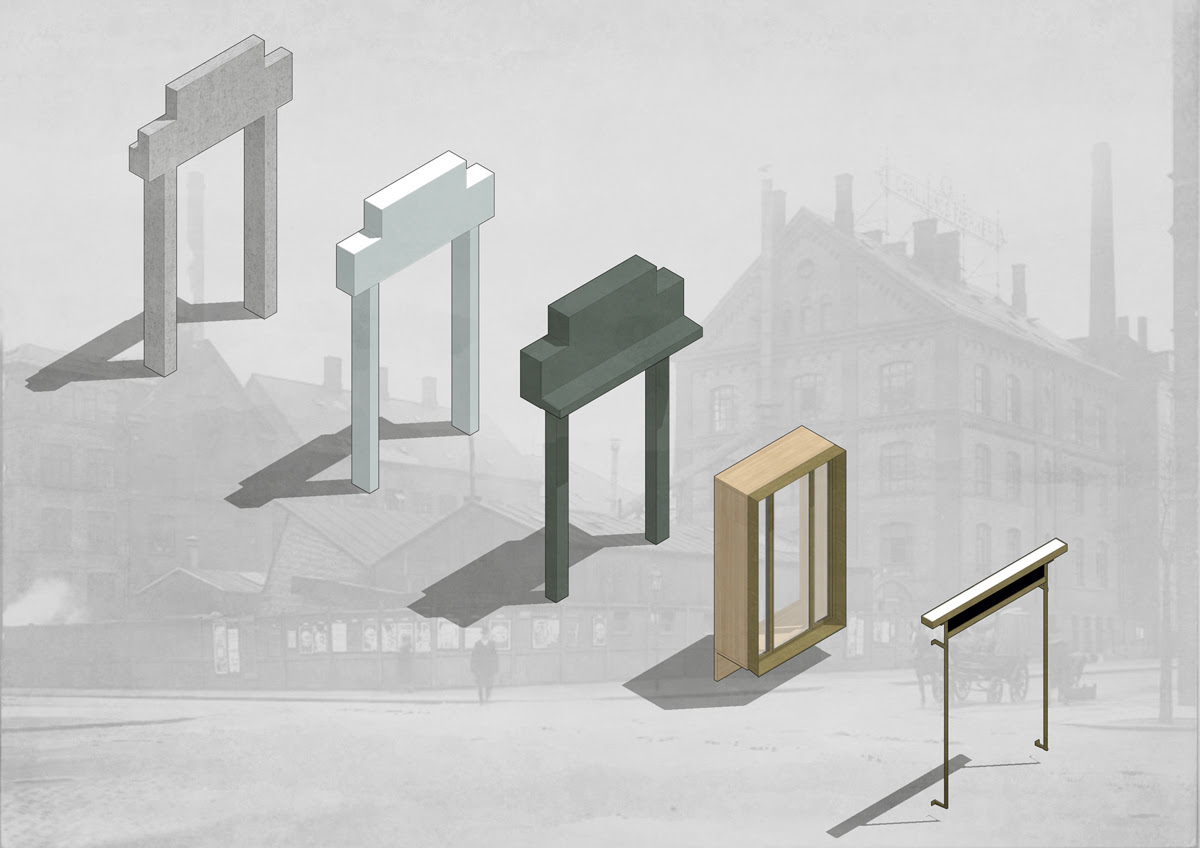 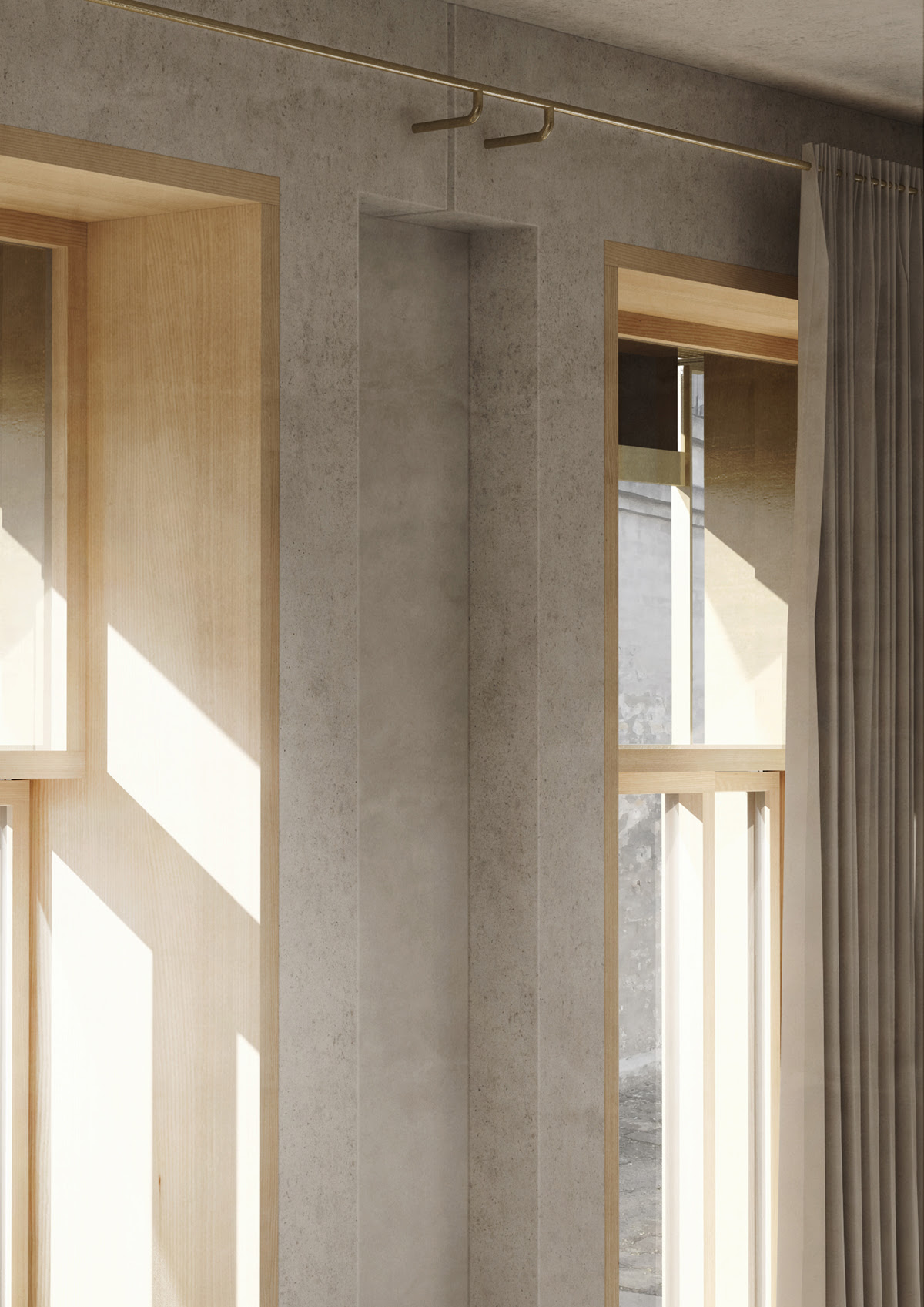 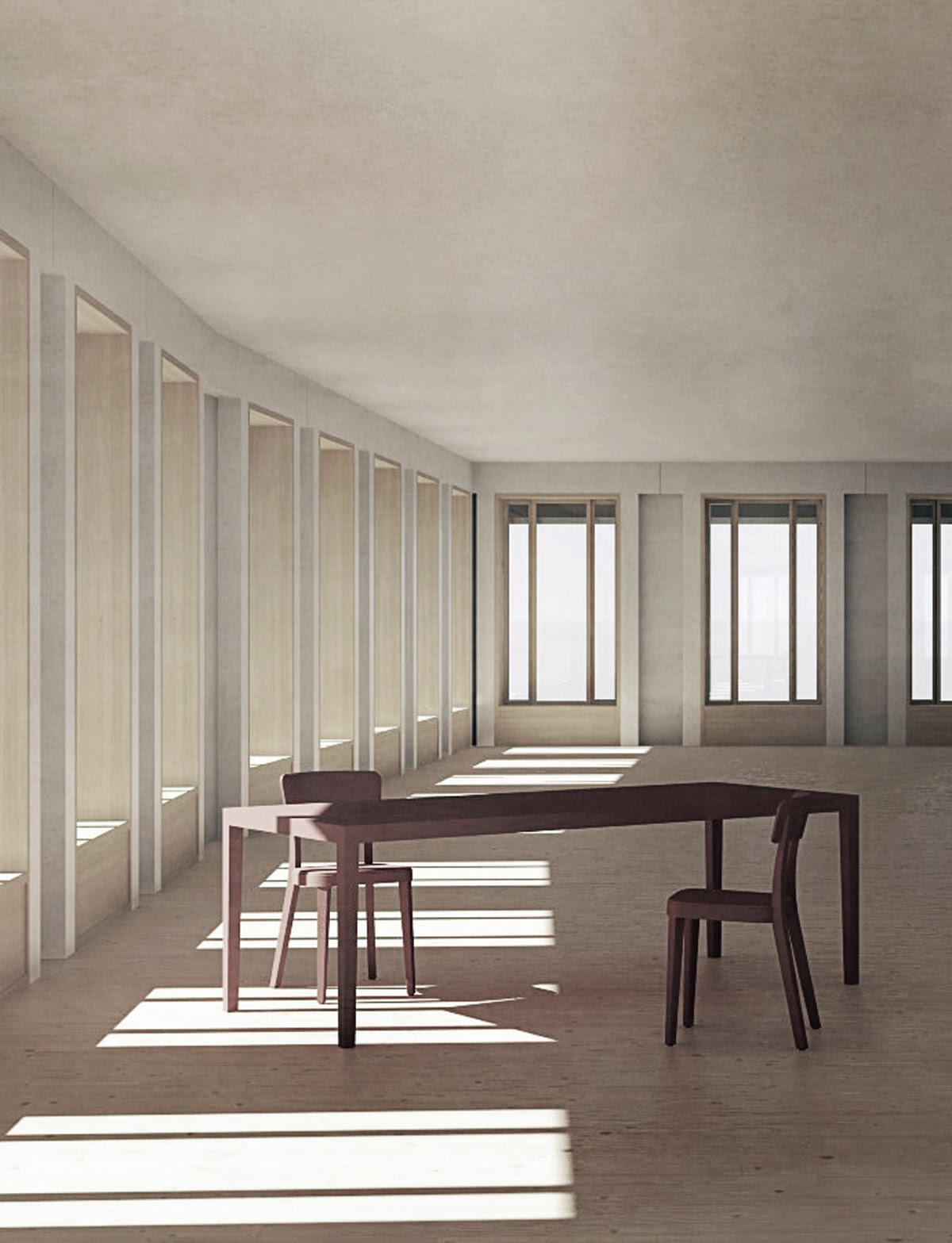 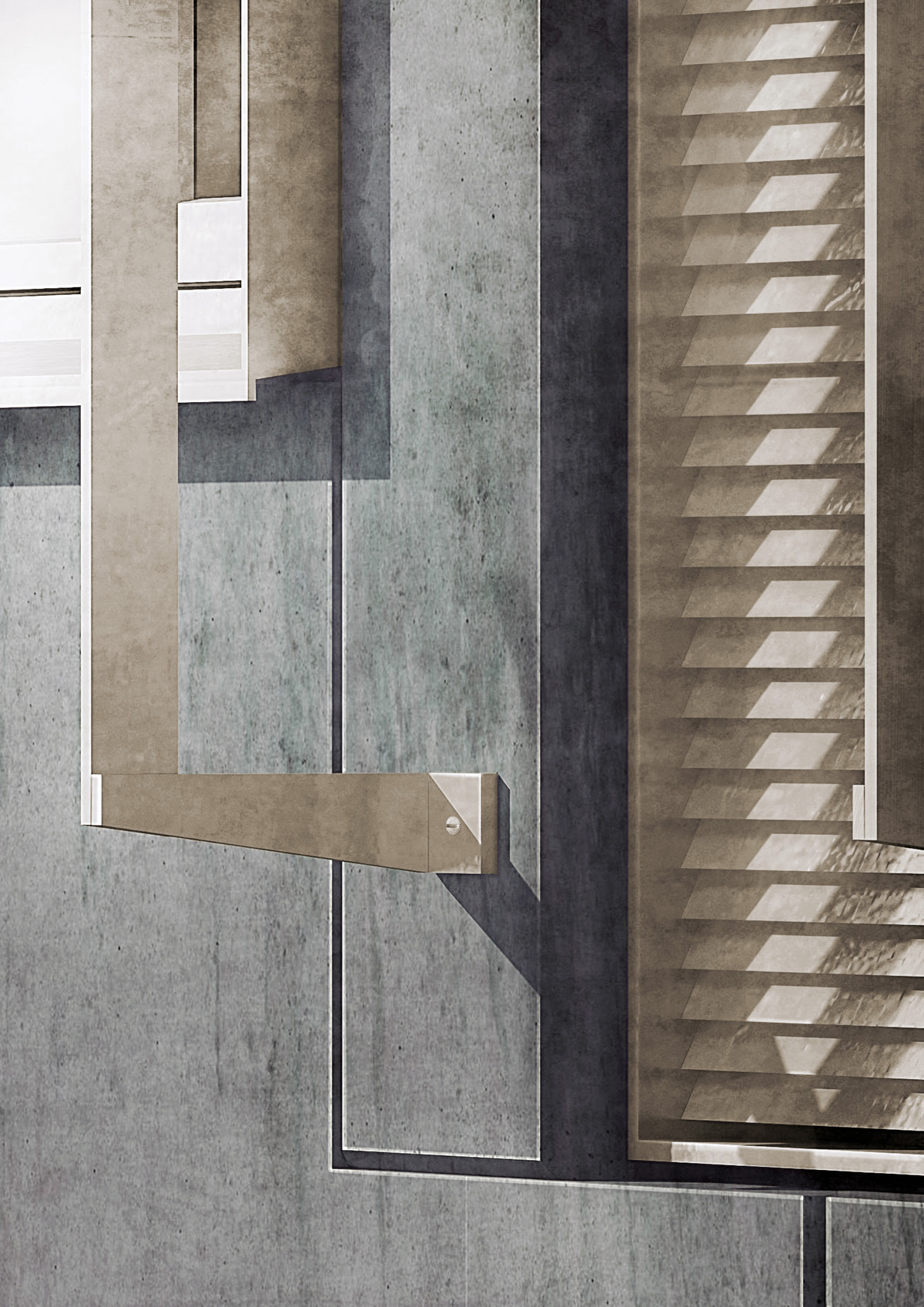 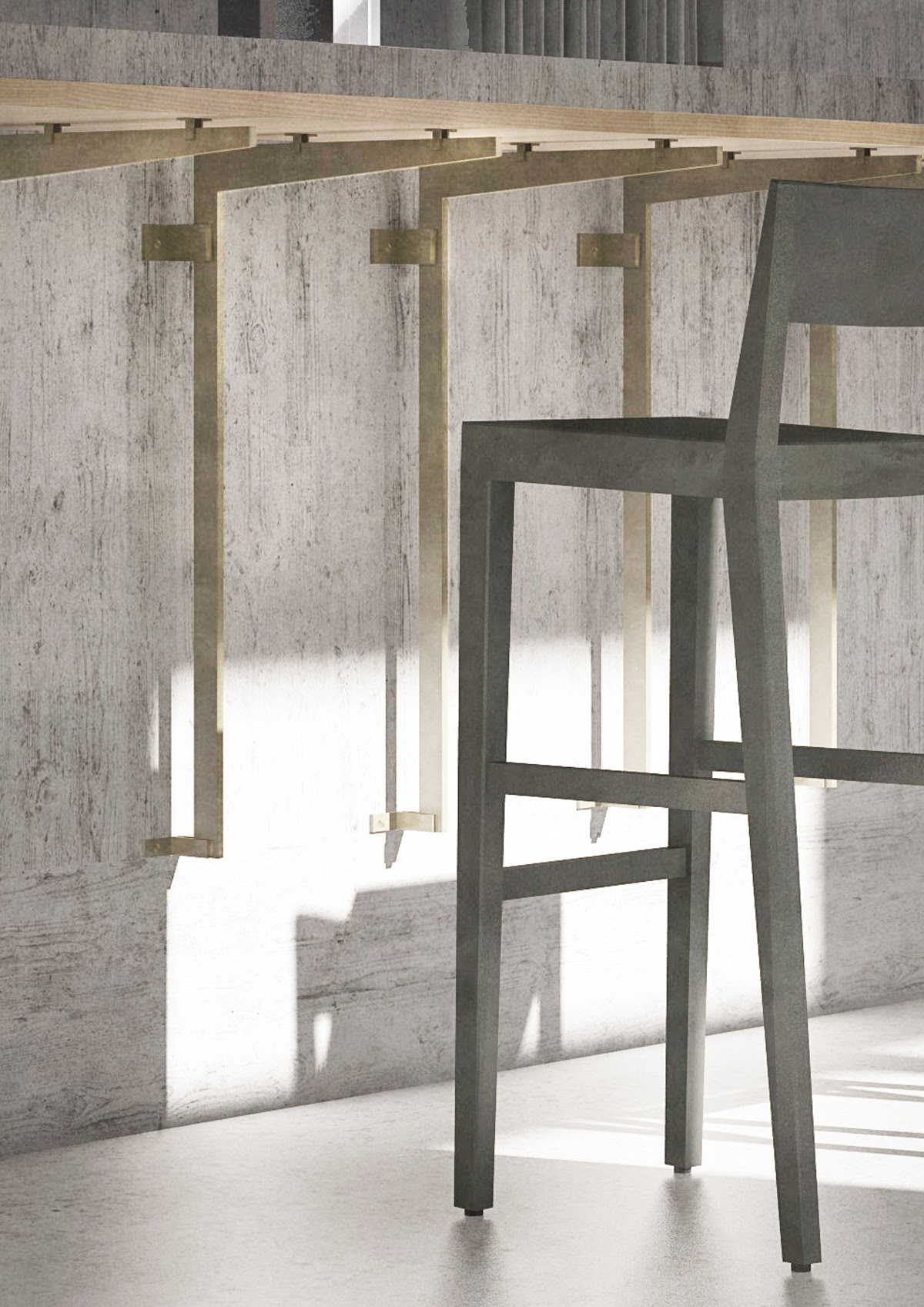 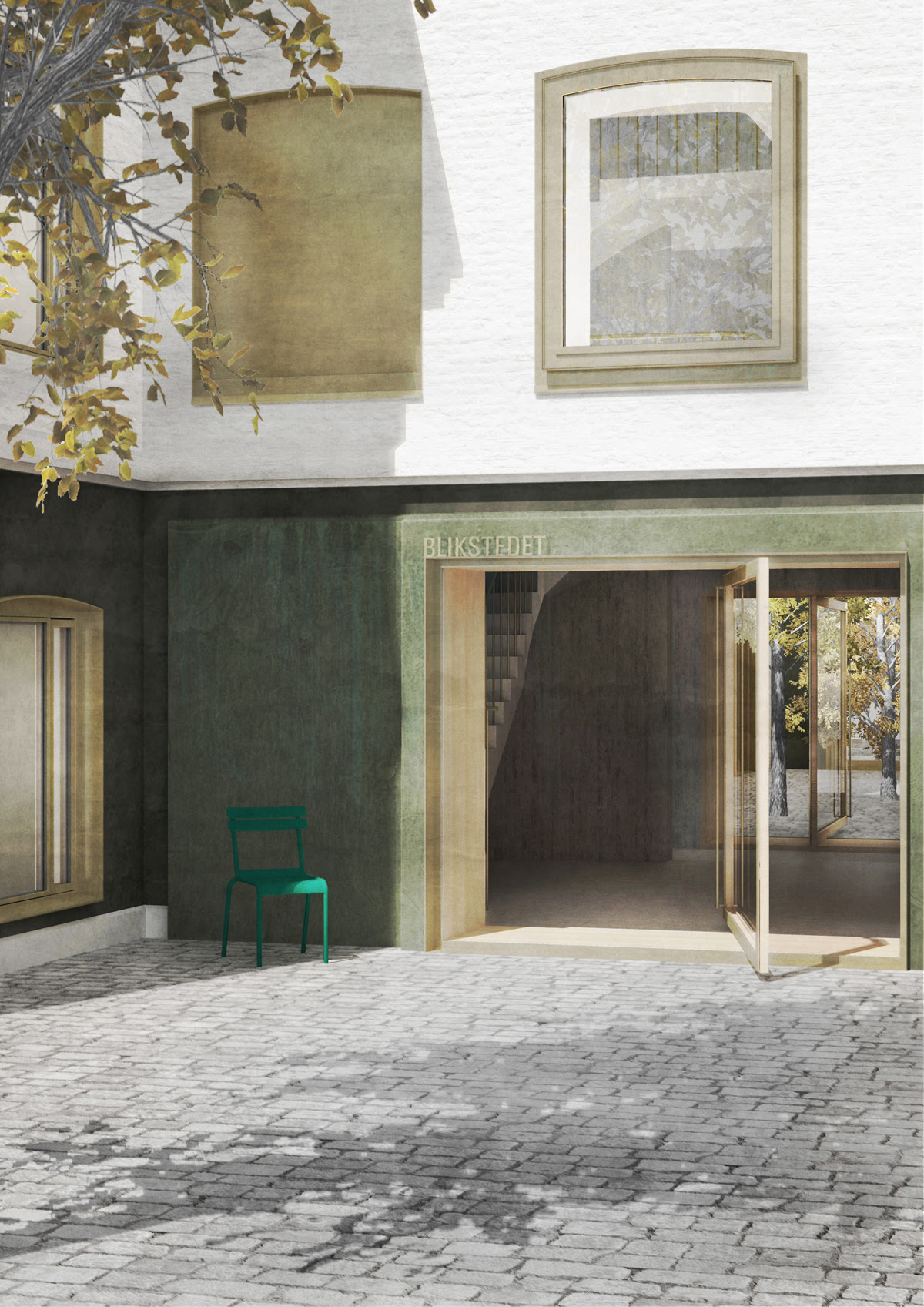 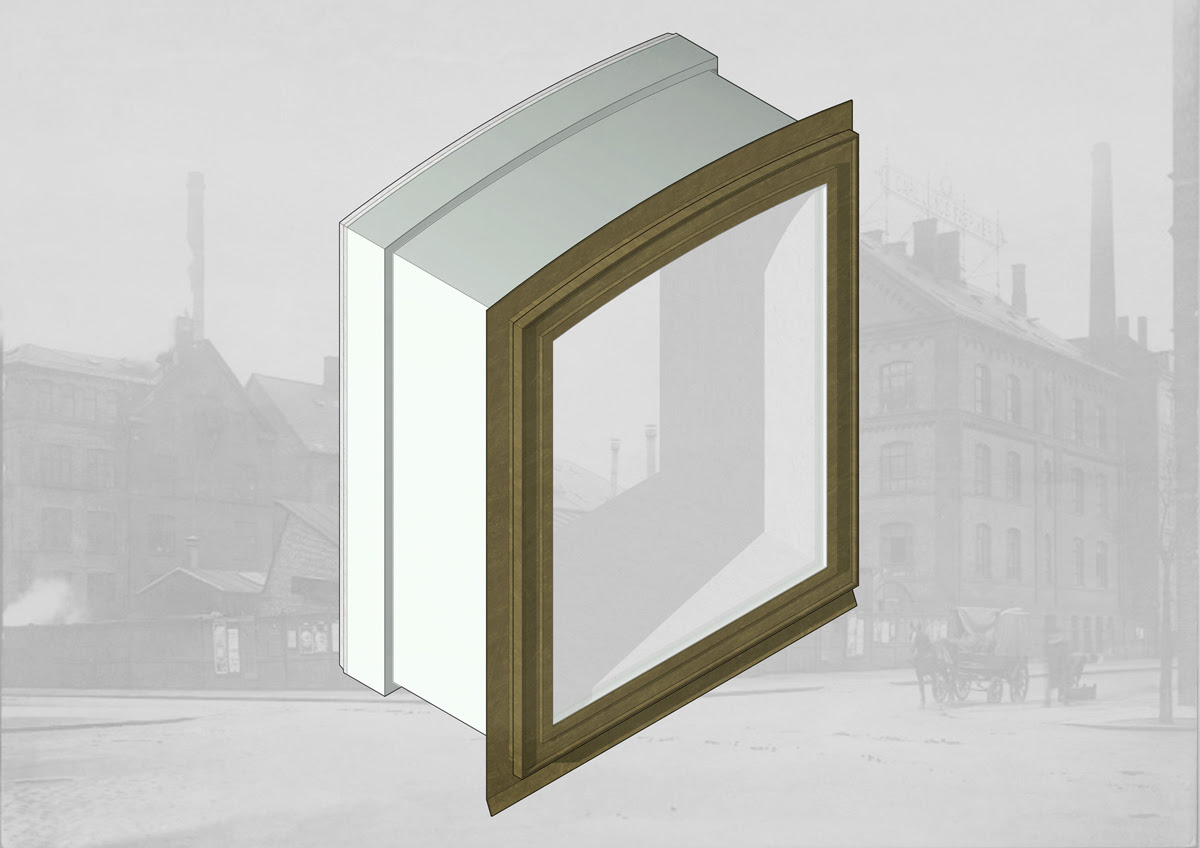 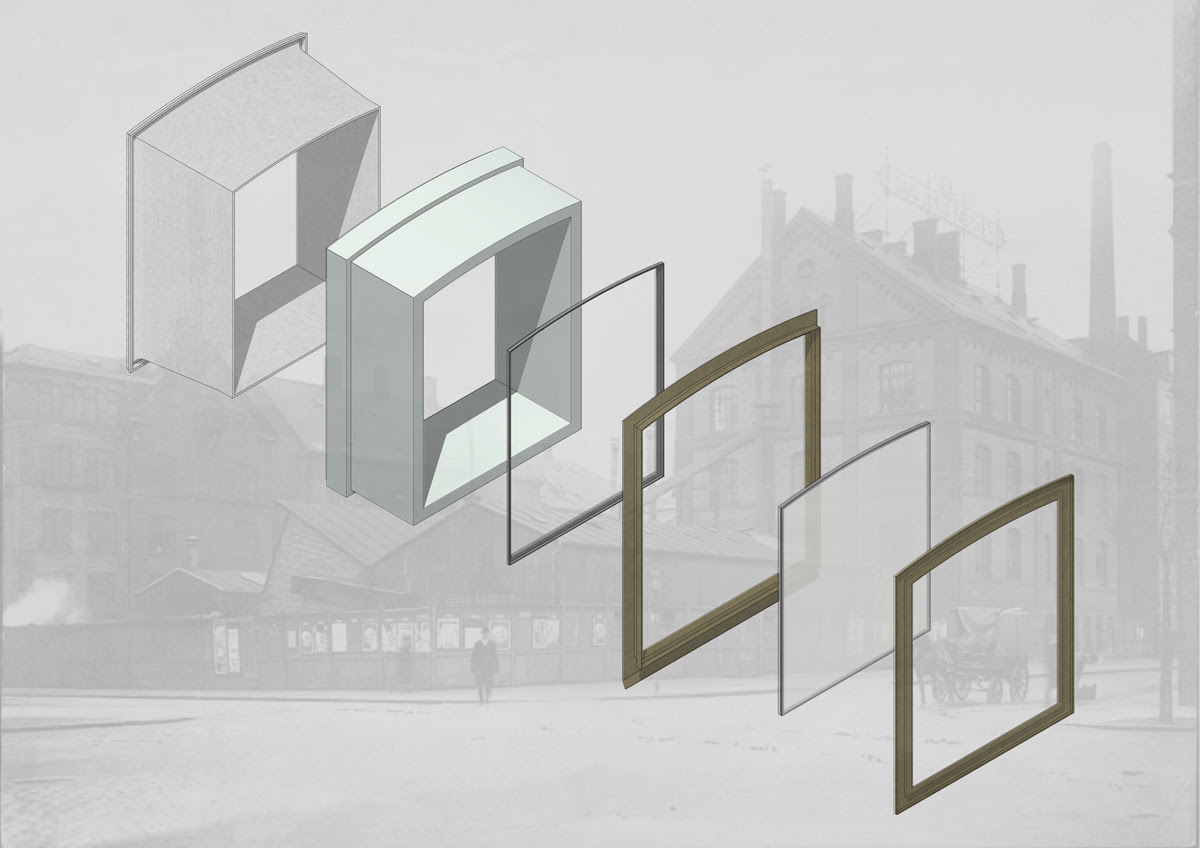 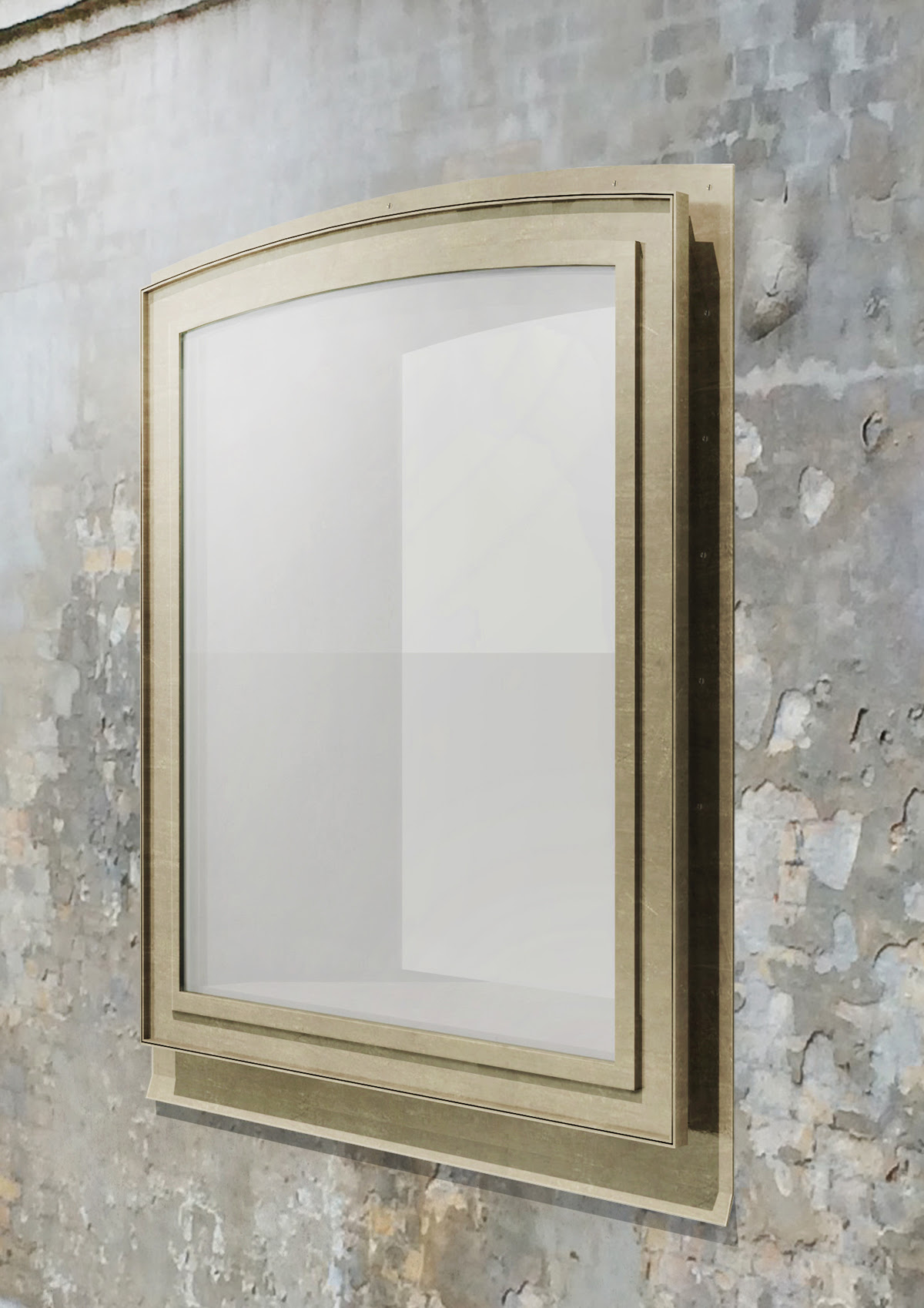 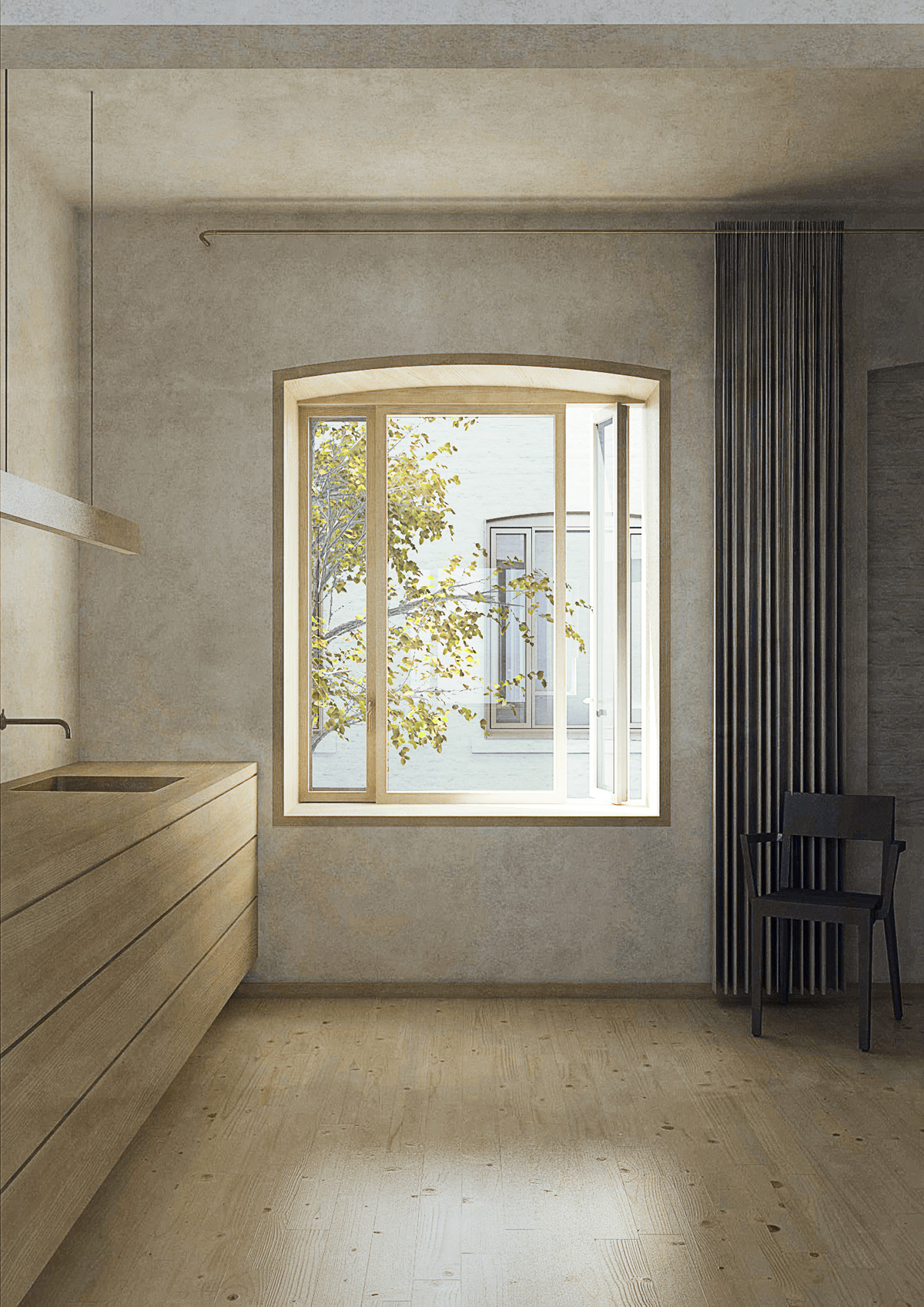 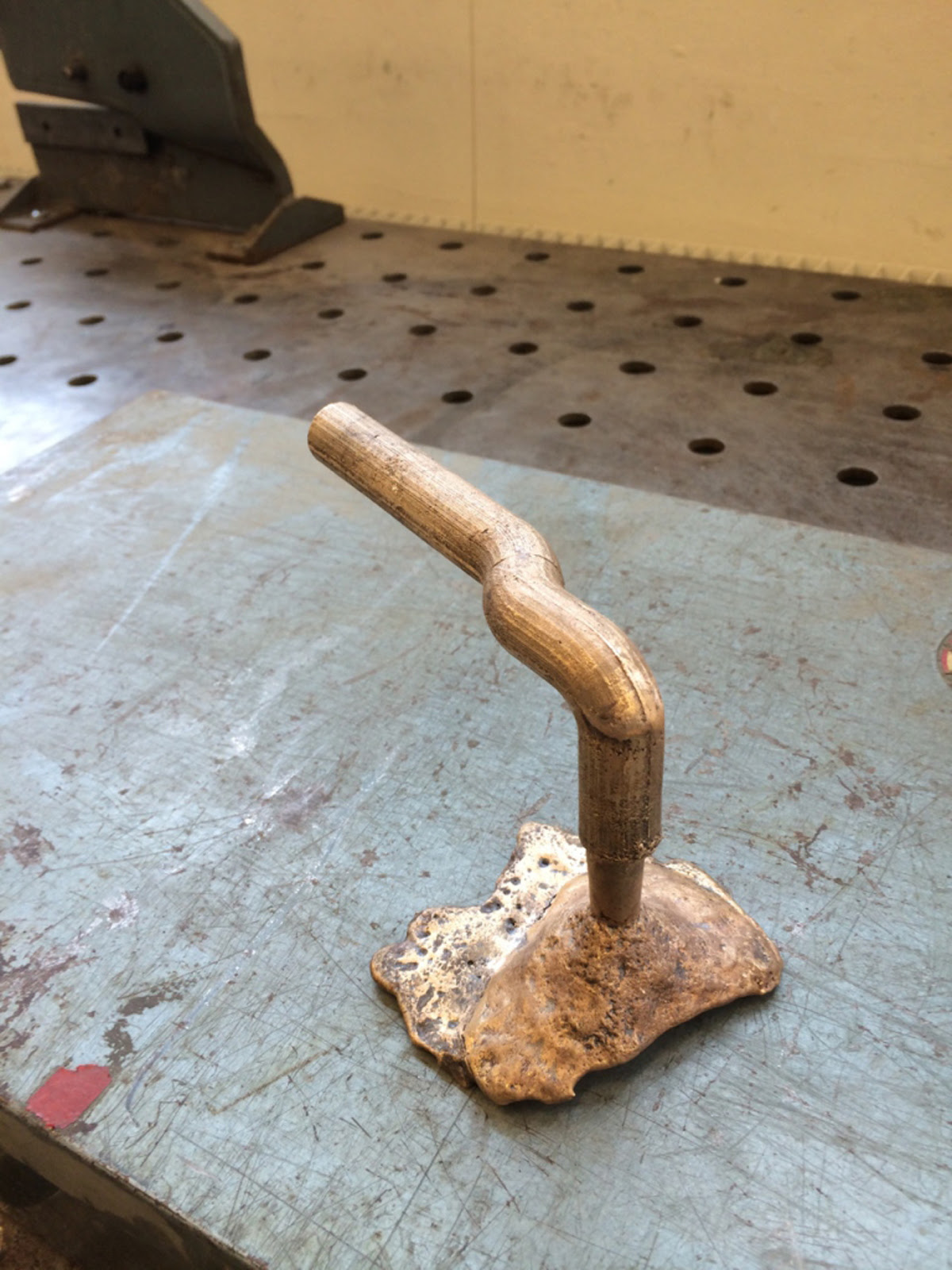