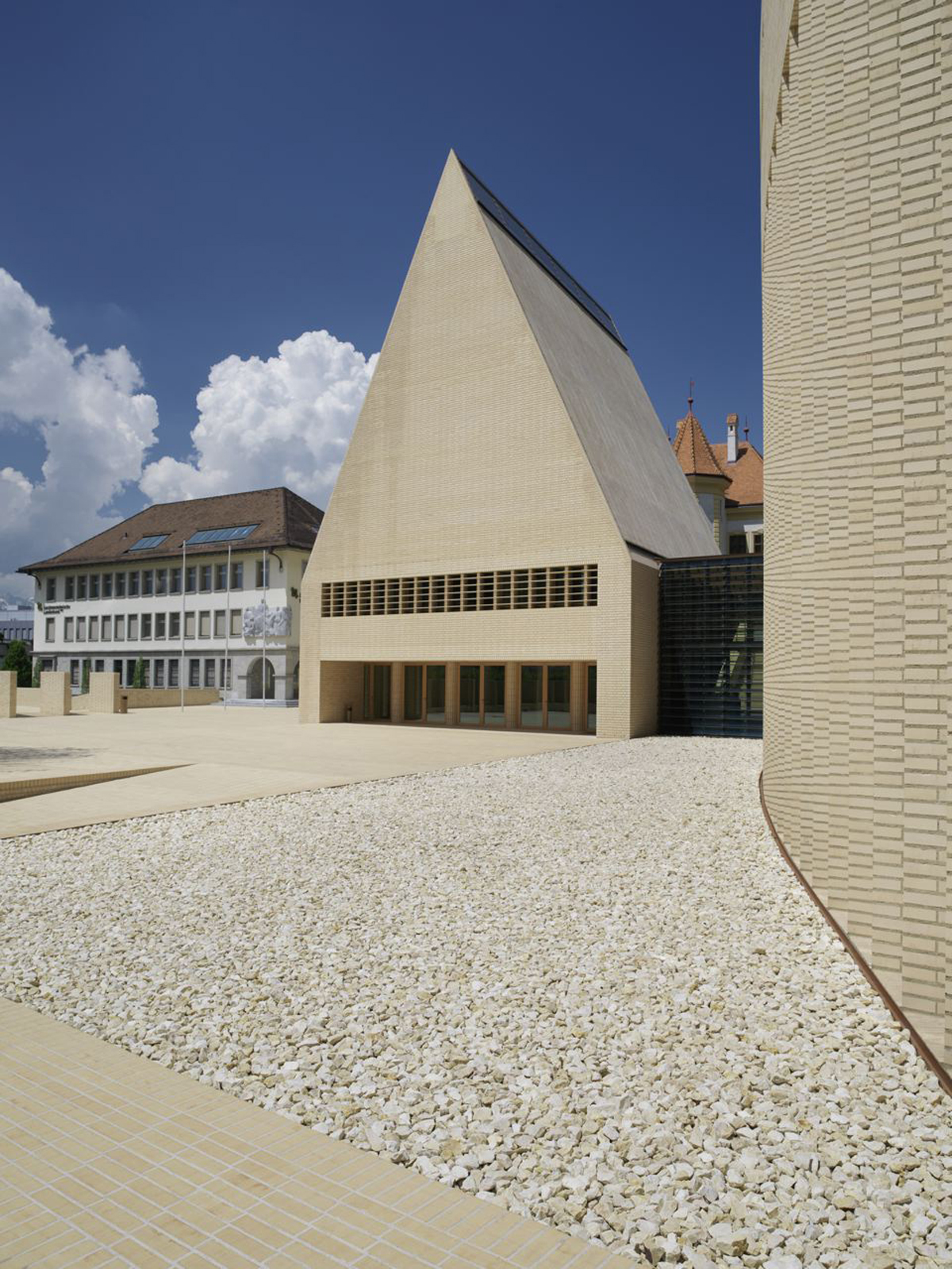 The project’s setting is composed of precise simplistic typologies: a ‘Supreme House’ for the plenum – a ‘Connecting House’ – a ‘Long House’ for the administration, the’Hortus Conclusus’. Not unlike elements that are inseparable parts of an organism, the project’s entity is an overall mono-chromatic materialization from jurassic clay brick that matches the colour scheme of existing fragments and monuments: apperception of one simple overall cast – for pavements, walls, ceilings and even roofs – ultimately leaving it to the sunlight to become the shaper, at the same time breathing an influence of austerity and serenity in the stage sets of Swiss pioneer Adolphe Appia.

The so called ‘Grand House’ of the government as the executive already provides one of the three state powers in democracy. Thus a so called ‘Supreme House’ for a parliament as the legislature had to significantly represent its being a counterpart within a newly intended state forum. Symbolically the ‘Supreme House’ is shaped to the exact same height of the ‘Grand House’. It is shaped to perform its out-standing part as significant and self-standing, much alike some ancient council hall still stands for the self-confidence of citizenry of wealthy commercial towns, and as if it needs to be nothing more than an archetype of a house.

In between the architectural dialog of the both a solitary Quercus Robur oak tree symbolizes jurisdiction as the third state power. A severe grave beauty of sober and serene austerity is derived from a background of protestant-calvinistic realism: that of the architecture of self-confident Hanseatic cities, at the saltroutes and seacoasts, representing both wealth and durability; permanence of typology, shape and material, reliable and defying climate and weather, to be rediscovered as of utmost appropriateness when giving shape to a national task.

Erecting a simple elementary ‘Stone-Roofed-House’ serves as an attempted archetype to visibly hold and shelter a legislature as one of the most distinguished essentials in society. For it needs little to be invented, whereas a lot could be re-dis-covered or retrieved. Such work favours the ken of what is proved, in order to thereafter translate it into something anew, which might well carry the same timeless validity. The more precise and essential its shaping succeeds the more imposing its impressive will be.

If it were a silent indoctrination of hall churches, of tall or long houses, if it were the non-artificial of the pragmatic and an appropriateness – its solely postulation of art can be a significant materialization of purpose, volume and space, starting at its base and being conducted towards shelter under roof, celebratingmaterial and proportions – succinct, yet simply re- composing cities, old and new.

The rediscovery of architecture as the phenomenon of spaces – interior as well as exterior – would make its cardinal theme of timeless building within silence and light the most moving notion.

Moreover, it may lead to develop concise topics and typologies: from the beautiful realism of the built environment of one’s own childhood a transformation may derive, yet to become a complex simplicity with the sensuality of pure materials. This might well be asimple means to a different kind of ‘sustainability’: an impact for solid buildings, made to purpose, and timelessly lasting, then to become a sustainable beauty for generations to come.

‘The fool hasten, the prudent rest, the wise walk the garden…’

The enclosed great garden – an hypaethral urban outdoor room for a grove of architectural green, flanking and thus encompassing the state forum, is conceived as a symbiosis of urban design, garden design and art. Its purpose is to create seclusion, as an tranquil place of contemplative silence for the arts. Underneath an orchard’s canopy of bizarre Amelanchiier copper-rock-pear trees sculptures gather, such as the ‘Figure in a Shelter’, a bronze by Henry Moore, and the ‘Puerta de la Libertad’, a rusted steel sculpture by Eduardo Chillida, inhabiting a ‘cabinet garden’.

A fascination for firm solidity and sublime soberness serves as an incorporation of many values, all at the same time: task-neutrality, cultural independence, sense-enriching, timelessness. It seems therefore that such cultivations breathe a certain level of sublime: Cistercians and Shakers, as if trespassing time and culture, must have enjoyed that very same inspiration – abdication of redundancy – emphasis on essentiality – elegance of the uncomplicated – all which, as a move towards a consistent attitude, do bear a certain unconditional strictness, at moments to encounter trivial circumstances of mainstream.

Thus it will evoke a counterpart to a misunderstanding of ‘modernism’ [rather than ‘modernity’ as an attitude], likewise contrasting with a misunderstanding of ‘traditionalism’ [rather than ‘traditional’ as an attitude]. However, this work somewhat searches beyond, tends to be more austere to serve as a hallmark of a different kind of modernity – that as an ageless approach, thinking and carrying ‘Shaker- or Cistercian-Spirit’ rather than ‘Cistercian- Style’.

This emphasizes a dialectics of typological consistency and artistic materiality: austerity with sensuality, in order to enrich the clarified with a sensuousness, which then can become memorized more engraving and therefore avoiding design-wearout.

Ambitious plainness, sculptured from stereometric volumes, modest elementariness, primarily composed, parsed within light, simplified by effectual shade – trace, wall, roof, void, light – will stand for a persistence in being, and a permanence in recurring architecture, provided as a means to give permanent requirements such modest kind of form and incarnation.

It also materializes facades that simply serve to shape as well as protect as shelter, a parking basement that needs no conditioning, neither with air nor with light, and it determines layers of tectonics as well as serving towers for minor uses and energy level to be externalized from usual warm envelope enclosure.

Architecture shall keep its essentiality, that of being an Applied Art. Application deserves controlled detailing as an alpha and omega – Especially, in this case of solid stonework as the overall scheme for paving, walls, ceilings and even roofs, which make a large scale humble, humanly minimalized and sensually enriching, and to ultimately determine a materialization that awaits maturing patina over years to come.

Such scope on harmonized composition of all strutural elements were conducted towards ‘stoneworks’ as a theme in its following variations: layered jurassic stone, casted jurassic stone, oak wood infills and bronze fittings, in order to create a project’s entity by its tiniest details.

In the backgrounds a challenging retaining wall, stemming against the mountains’ massif, is conceived with especially prescribed pigmentation for SCC self-compacting-concret. It is one of two contemporary European fundamental projects for this new construction-technology [the other being Zaha Hadid’s ‘Phaeno’ in

Wolfsburg, Germany]. With that respect the studio elaborated a special moulding system to prevent from getting gaps when pouring and vibrating concrete from underneath higher layers.

The inherited typology of a town hall or market hall once used to be carried by columns of its corn-warehouse, in which still to celebrate and promenade to date, now supporting the council’s plenum and being the vestibule to a procession leading upstairs.

The lobby of a mural hall of columns serves as an interior forum – extending the outdoor spaces of the state forum via an entrance terrace, also introducing the next sequence in space – the ‘Connecting House’.

There a flight of stairs, inserted into a glazed-in alley-way, leads senators, representatives and their state guests up to the plenum, and over to the adjacent ‘Long House’.

It is of similar intention to preconceive as well as to roof the work inside this ‘Supreme House’ – in which and where underneath the conclusion illustrates itself just as significant as the round table of senators, at the same time symbolically holding the meeting with the sovereign of the public – on the same level, under one roof.

Its overall hybrid brick-conrete-construction makes it a simple yet rich space, thanks to an inconspicuous but state-of-the-art-construction, challenged by issues of structure – energy – acoustics – lighting, attempting the materialization of architectural dignity.

Such pure and meticulous materialization in a new context rejects generic easy conventions, but rather strives for an architecture of space and timelessness. It is this very elementary and sustainably durable quality that makes use of non-renewable resources according to rigorous high European Minergy-Standards.

Therefore it also stands for both, a different kind of exercise and responsiveness: that of ‘low-tech-high-reliabilty’ rather than those common ‘high-tech-thermo-bottles’, often not yet balanced but selfindulgent performances of not much more than another trend.

Inside this plenum the subtle art of Sabine Laidig creates a sublime synthesis with this space creation of simplicity and calculated light.

The ‘Long House’ is curved, parallel to the mountain’s base, can be conceived as a mural screen, like a mural venetian blind, protecting its serving functions for meeting, administration and for representation with filigree mural brise-soleils. Inside, stony solidity

is everywhere set into contrast with fine exquisiteness, in order to have a sensually enriching dialog of a limited number of extremes.

Its work spaces as all furniture were meticulously worked out, for utmost appropriateness, via use of models – study sketches – perspective drawings for the president’s office – the secretariat’s offices – conference rooms – and a lounge, to achieve entity.

A spacious rooftop patio concludes this by providing framed views over the city, the forum, the river, the massifs and up to the castle. Here its seclusion will serve for inhabiting a growing sculpture collection as well as for summer banqueting receptions for Liechtenstein’s international guests of state.

A merging modern archetype, materializing to shelter contemporary needs in a proven configuration, thus at the same attempting to get a new deal of good convention started and reconnecting to common sense about architecture as space in context and shape.