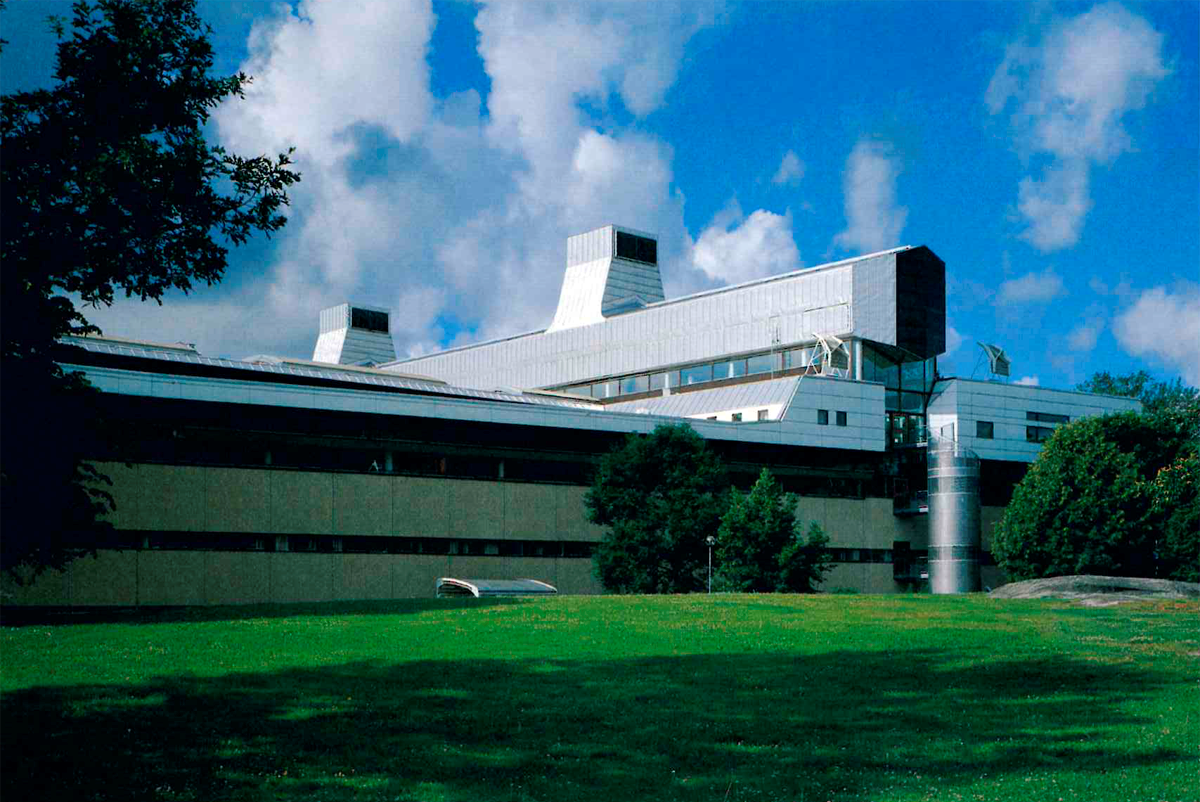 Erskine was asked to compete in a parallel sketching competition with four other Stockholm architects for a new library at Frescati University. The competition process involved design development with university staff and students. The outcome was that Erskine’s design won approval.

The student’s center building completed in 1981 has a roof structure, reminiscent of Borgafjäll Ski Hotel. The strong geometric shapes of the plan interlock and collide to provide a variety of spaces. The new building uses an existing agricultural museum as dining hall.

The library building represents a more modernist approach, the mass of the building placed to form a balance with the buildings on the other side of the campus, thereby creating a park vista. At the same time the library building deliberately collides with the existing sixties slab blocks and creates a more human scale as it respects the oak trees to the east and the vernacular buildings to the west. The curved roof form of the entrance lobby is an unexpected juxtaposition that gives a relaxed expression. There is a central light well into the deep plan building while perimeter glazing is angled to reduce the effect of low seasonal sun angle. This feature, together with the raised external seating shelters, gives the individual an opportunity to identify with the institutional building. 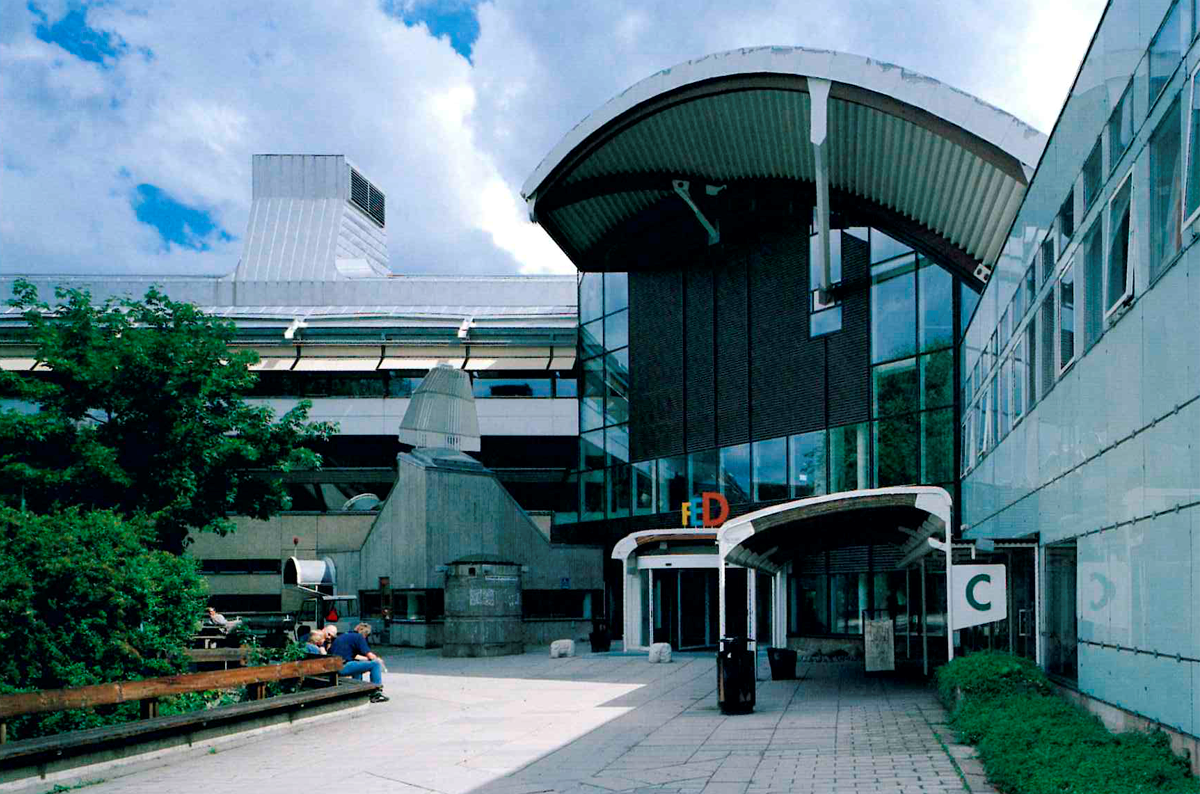 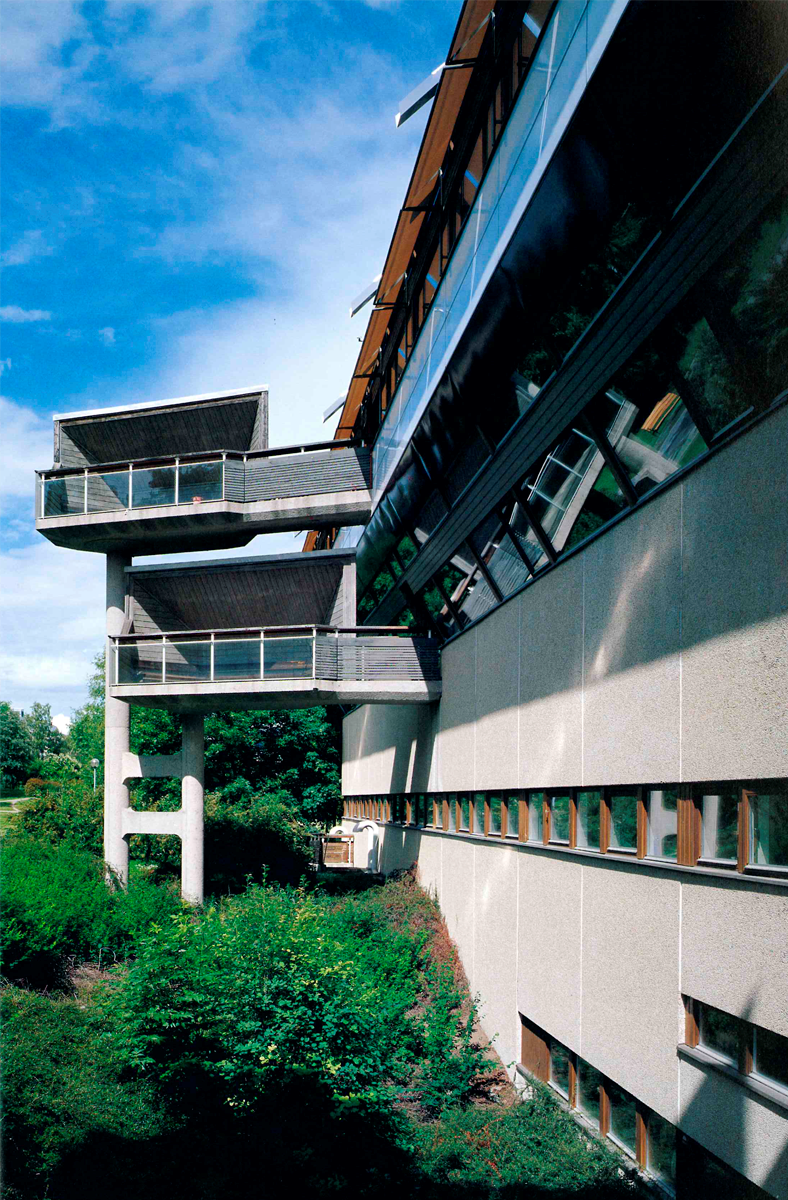 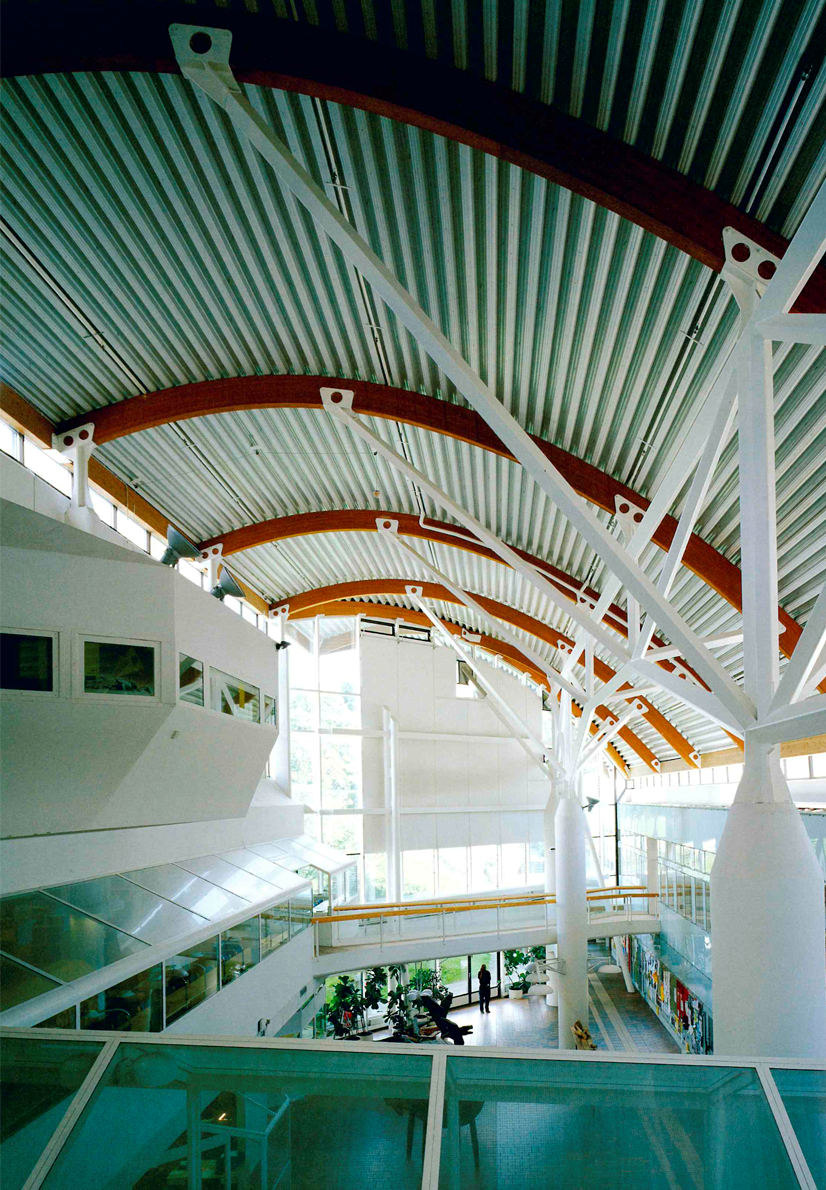 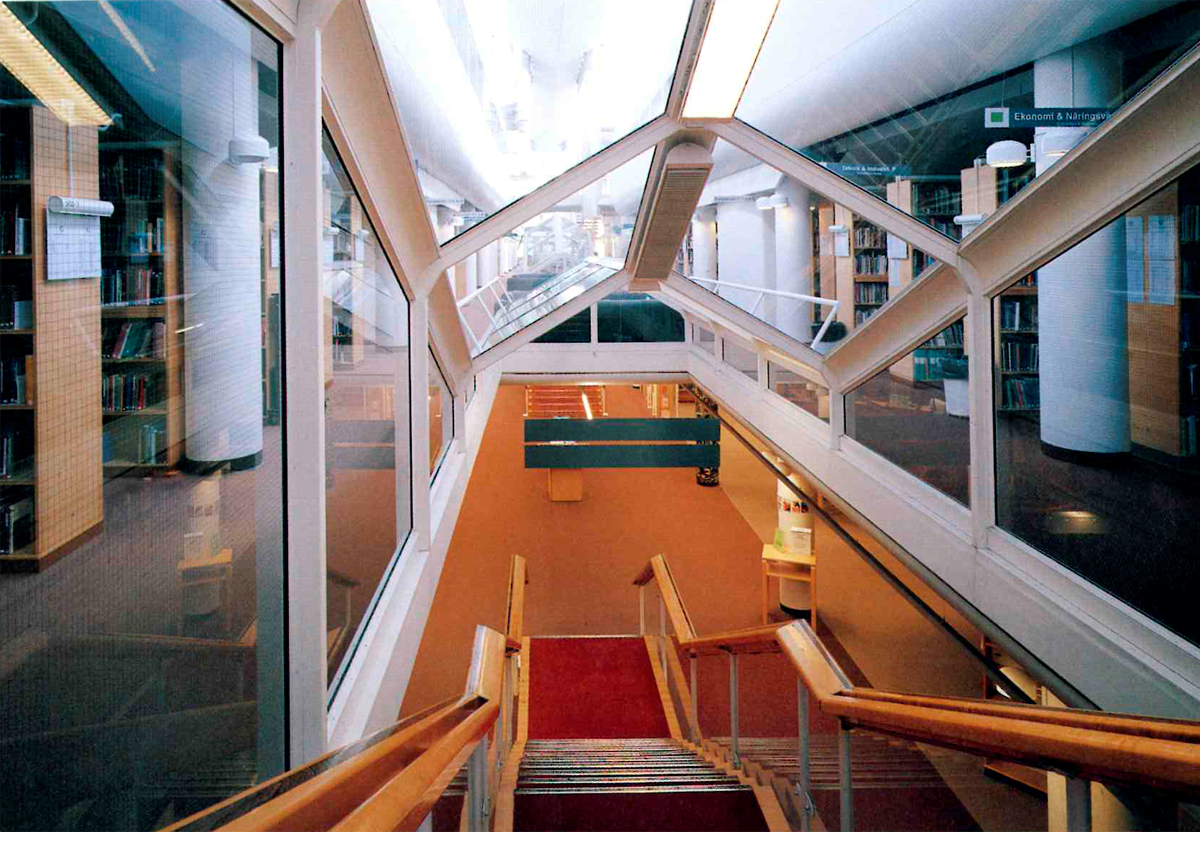 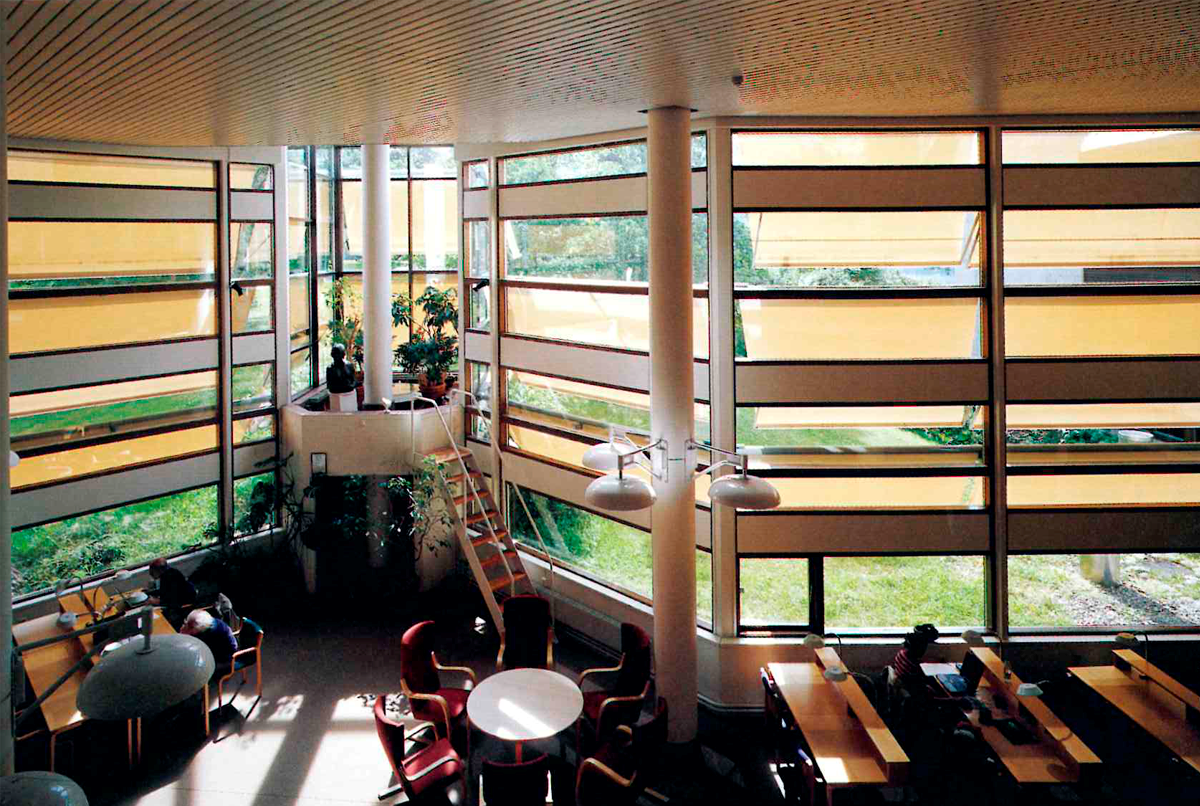 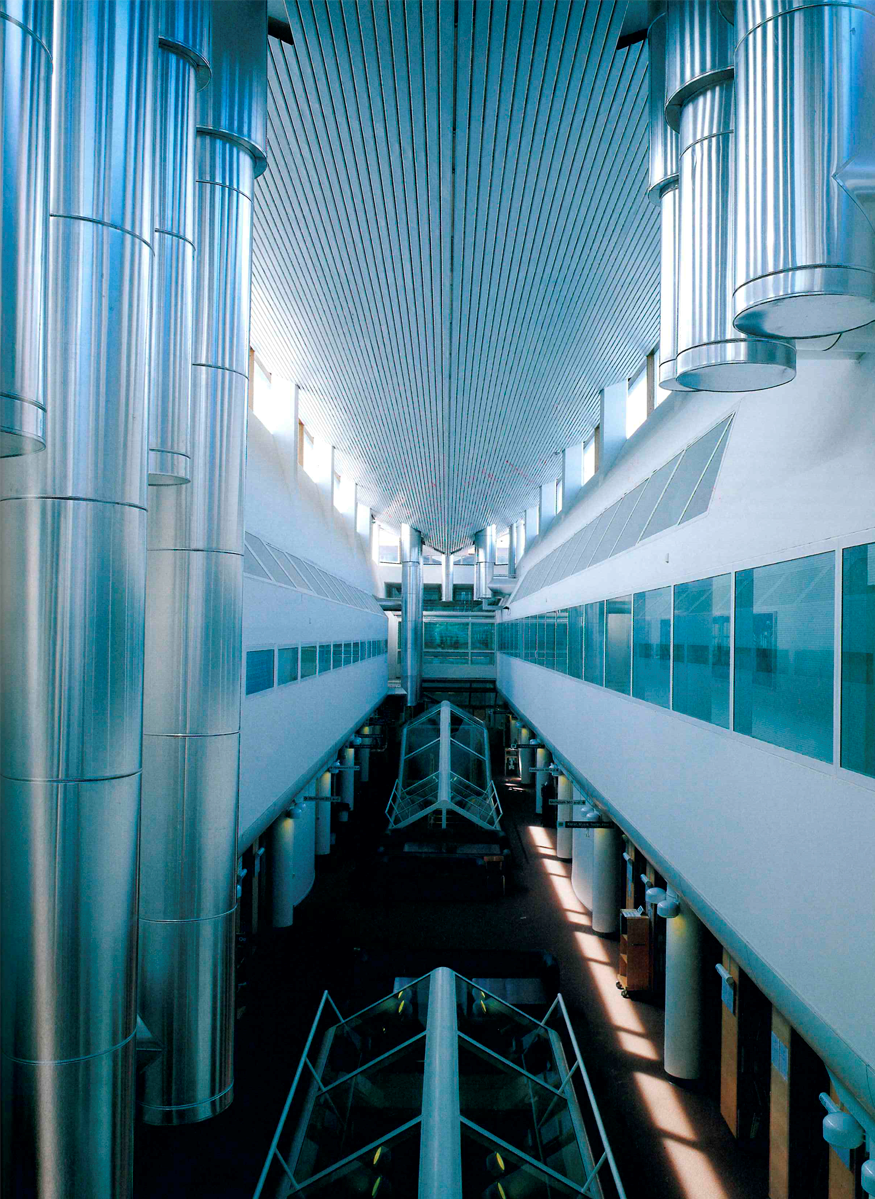 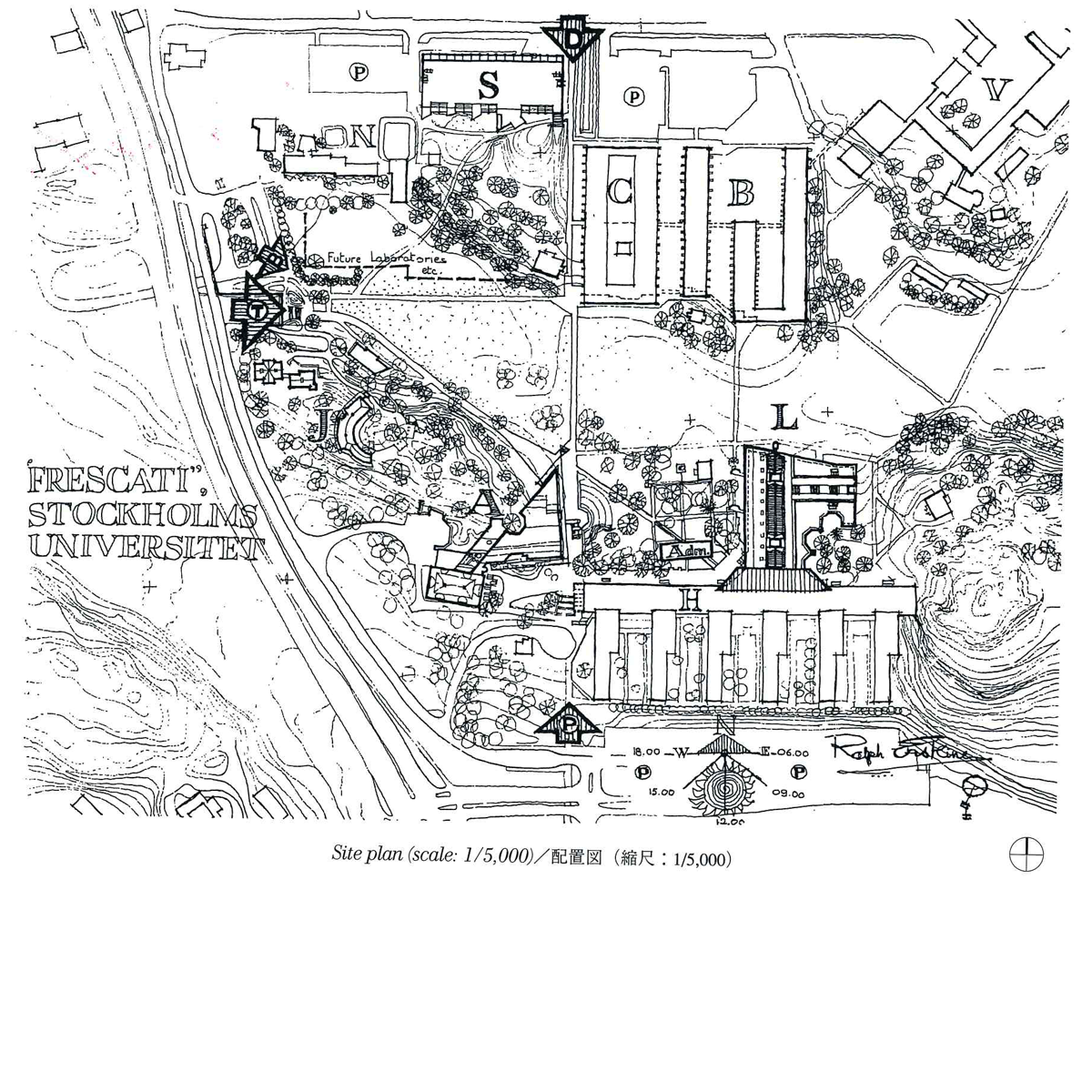 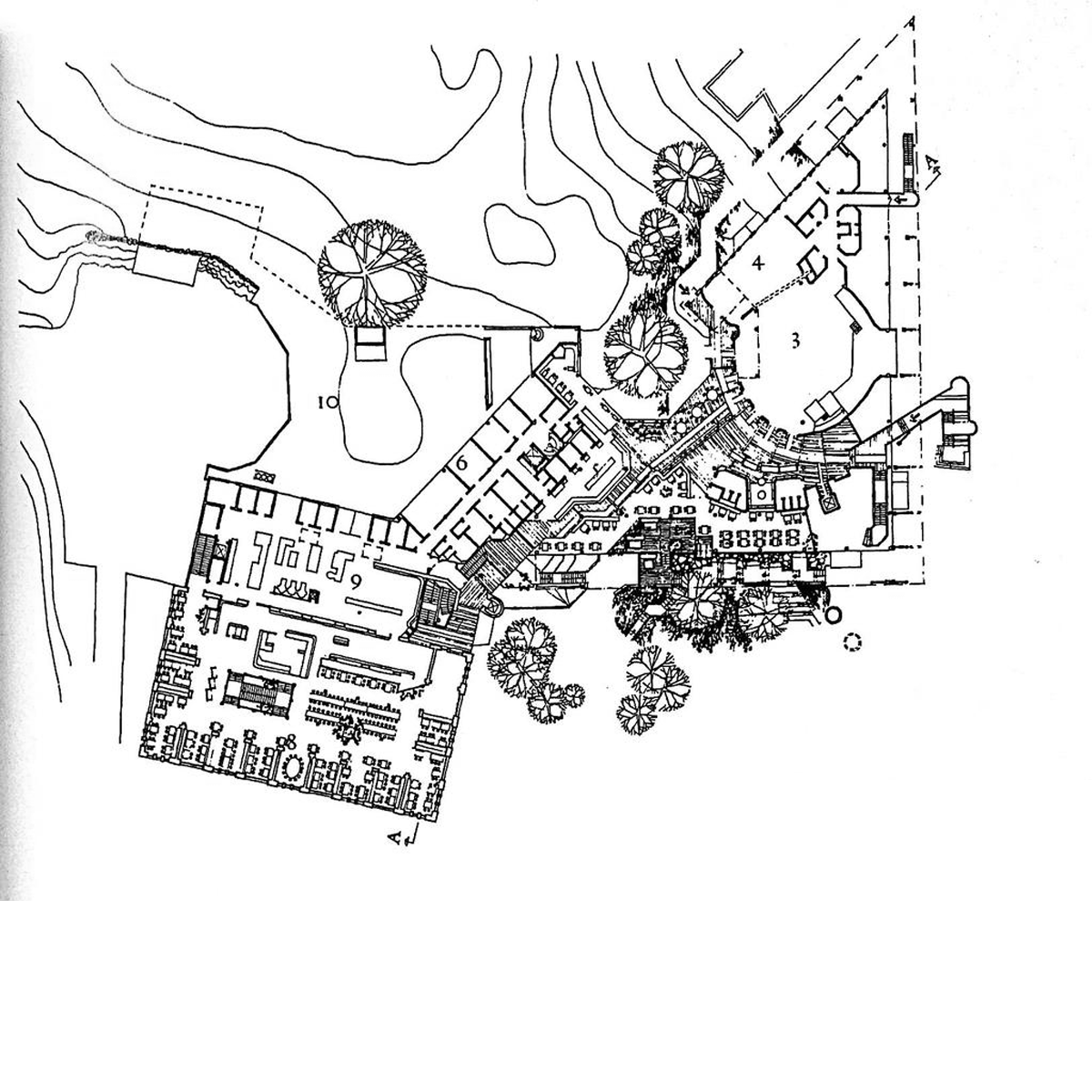 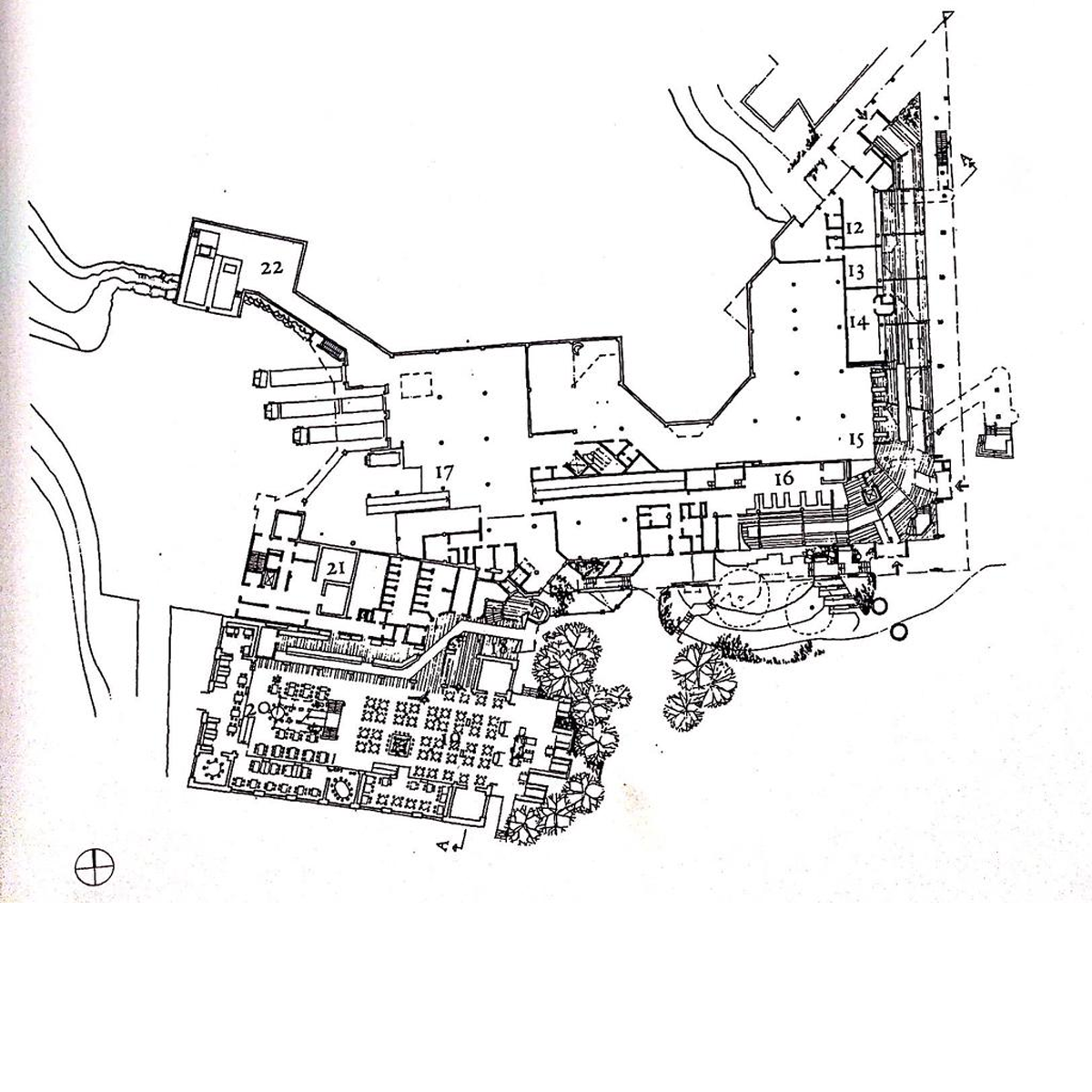 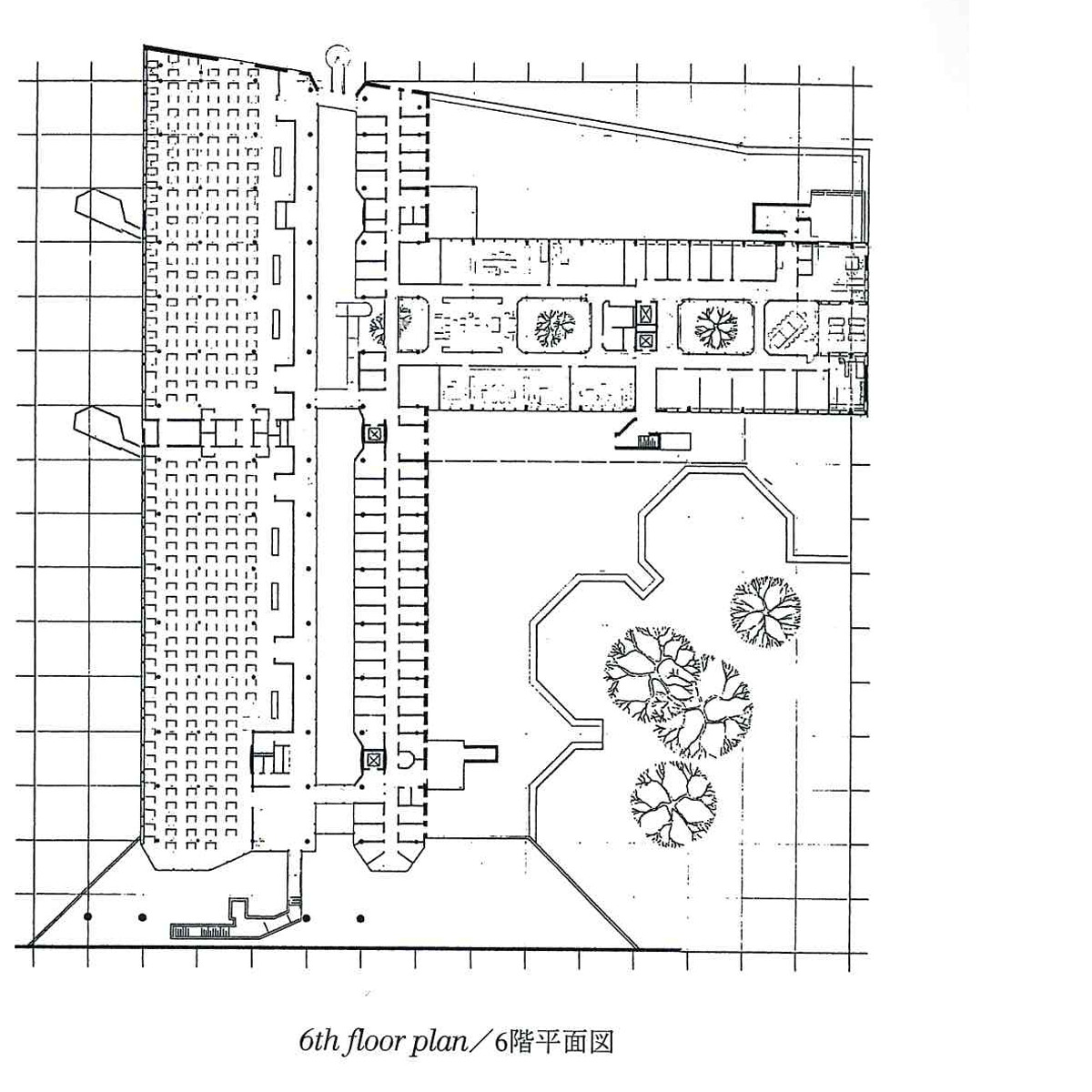 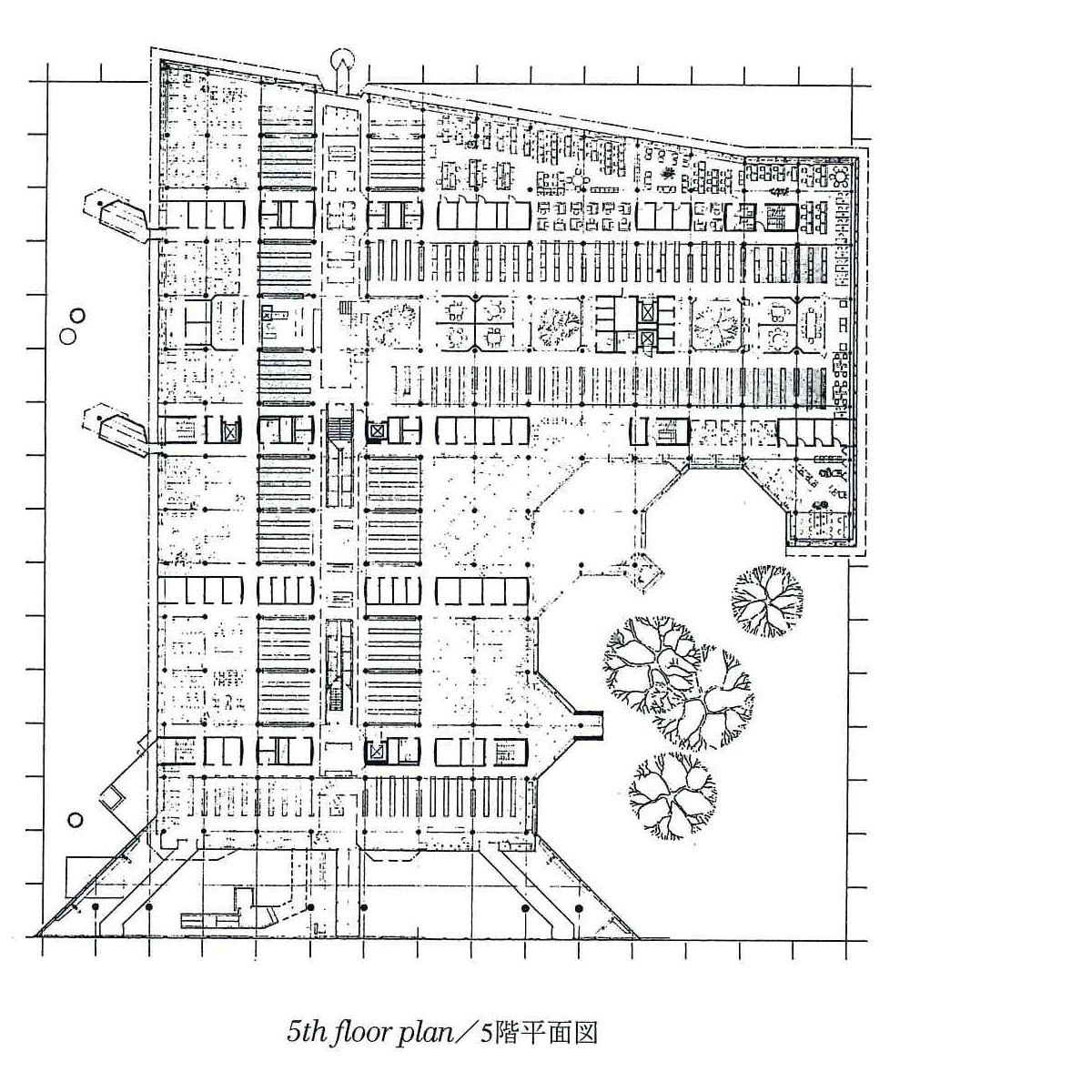 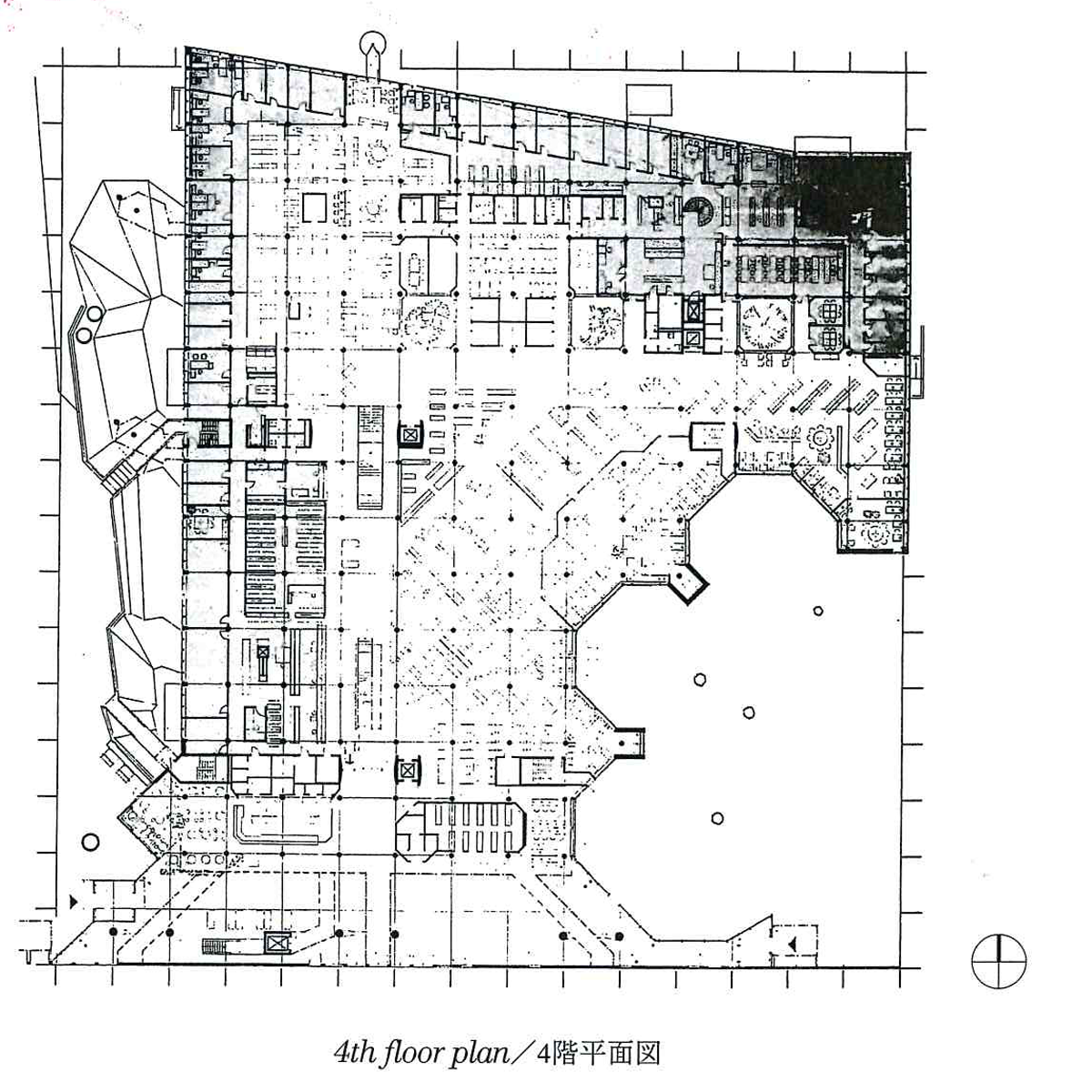 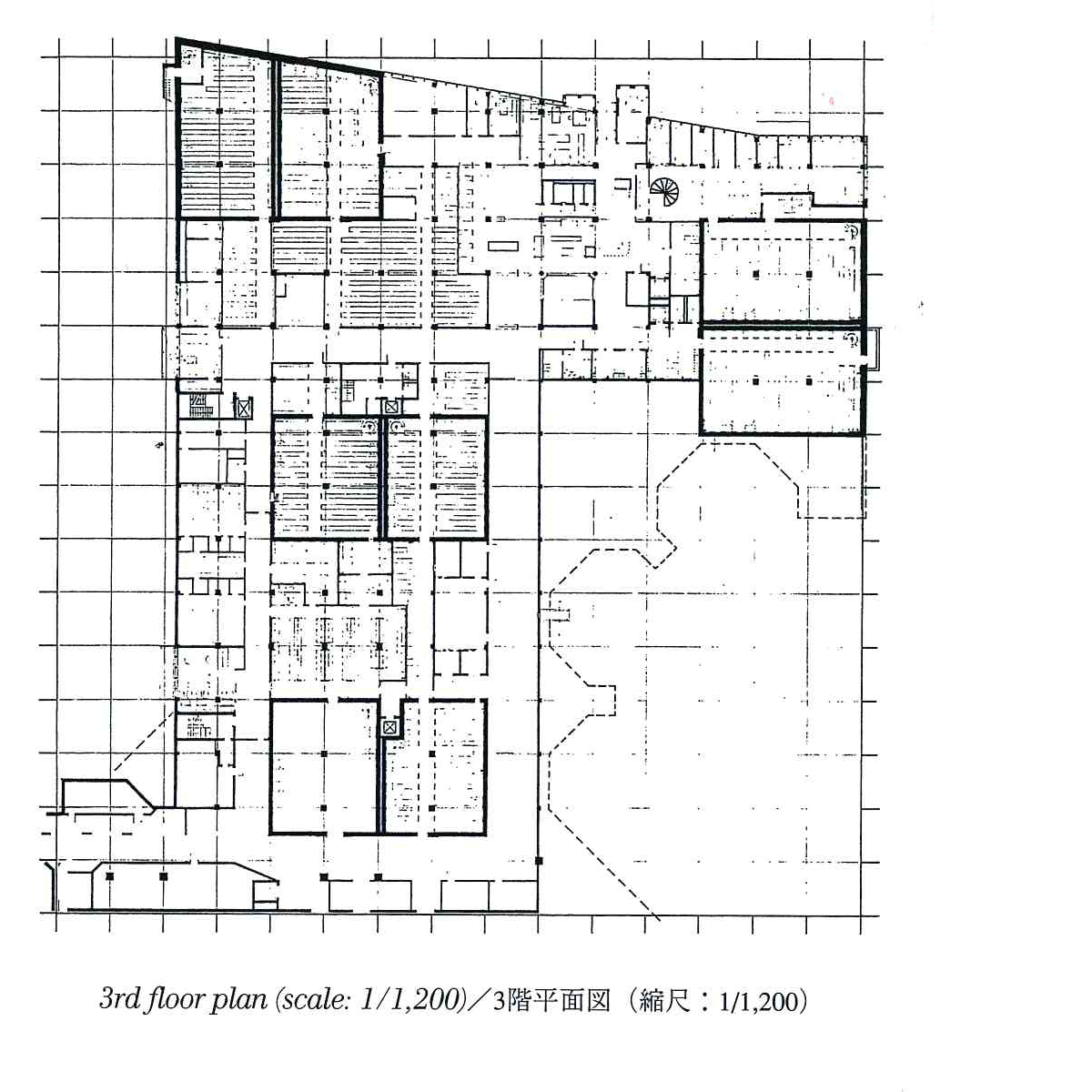 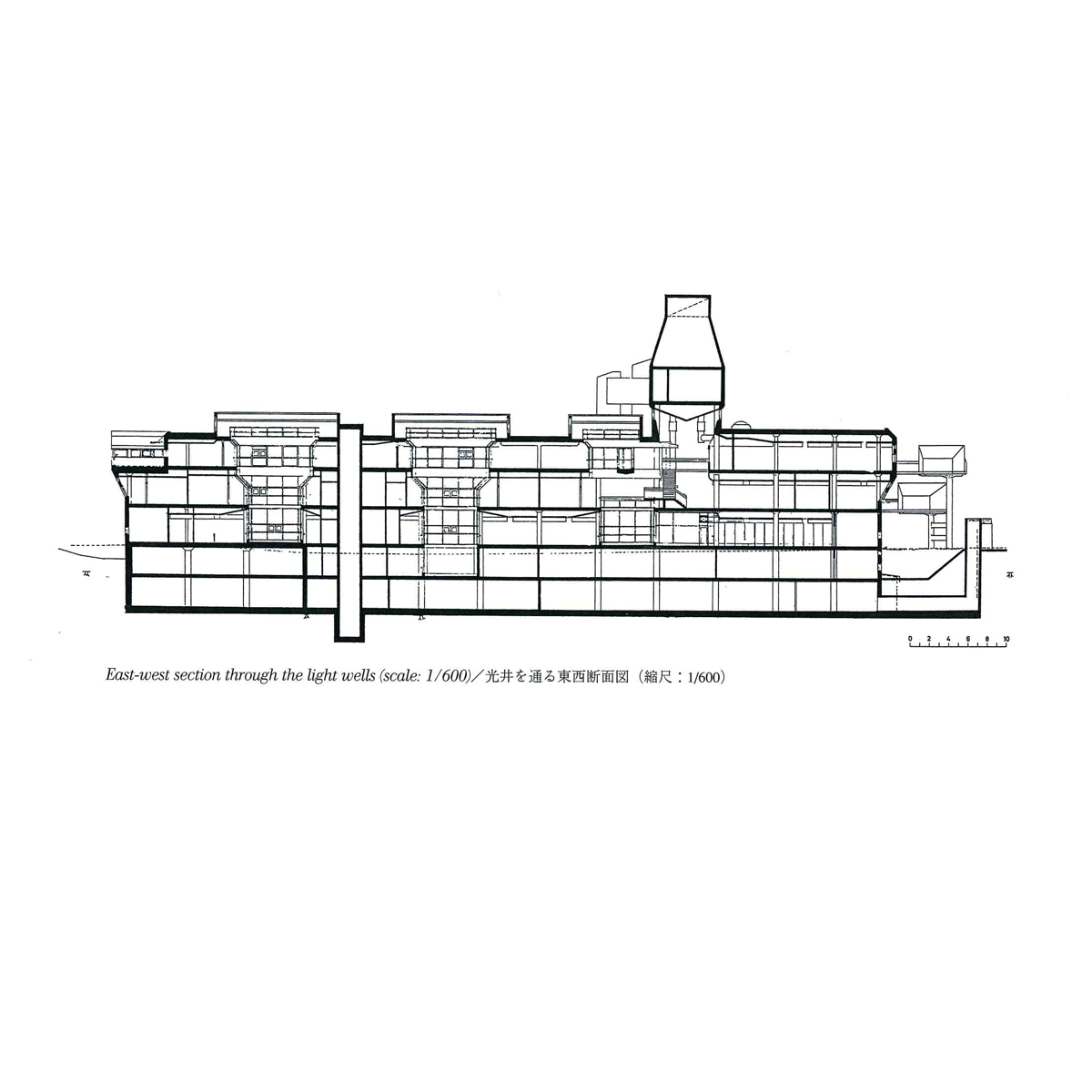 The sports hall was Erskine’s third building at the university campus. The building was subject to a constructor’s competition where building cost was a decisive factor. The hall is a rational construction of arched glued timber beams. An internal building divides the interior in two spaces. The exterior is of large areas of metal sheeting in various colors. The flank pleasing variation. Erskine was keen to incorporate natural daylight into the hall, a feature unusual at the time. Through the interest of the main contractor, sunlight reflectors were realised. 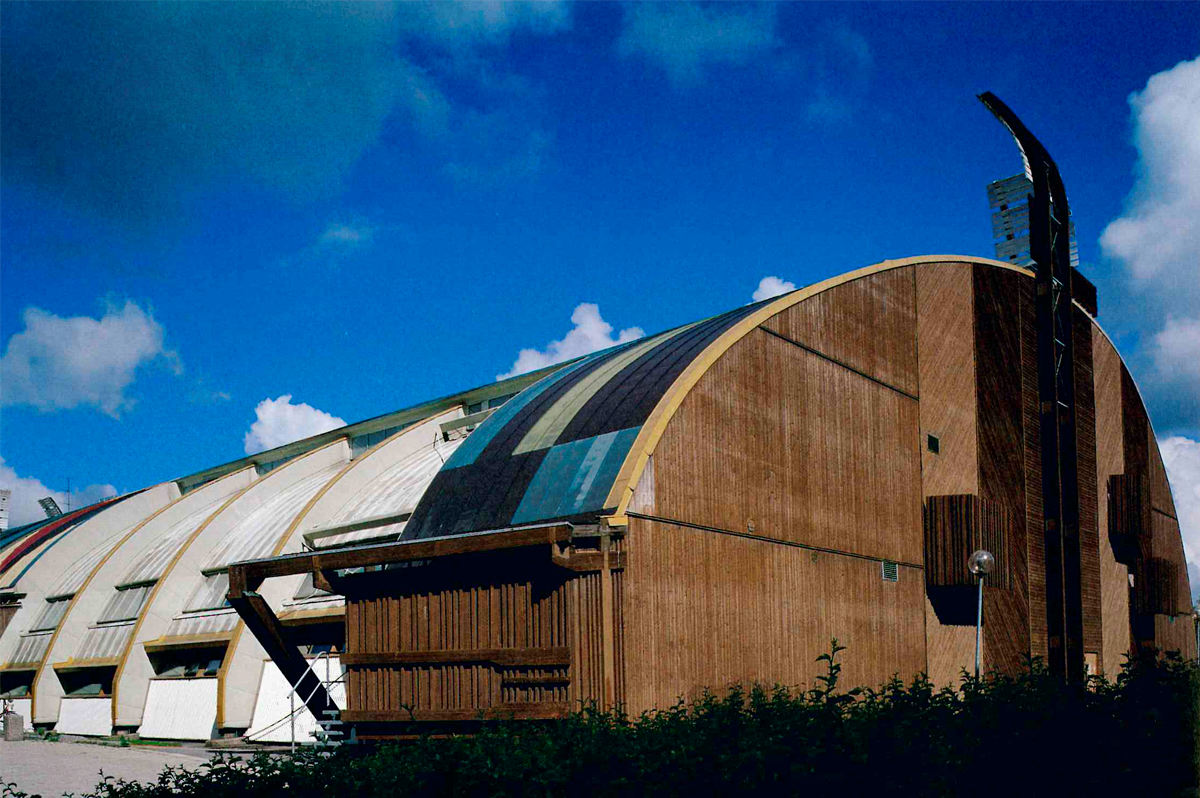 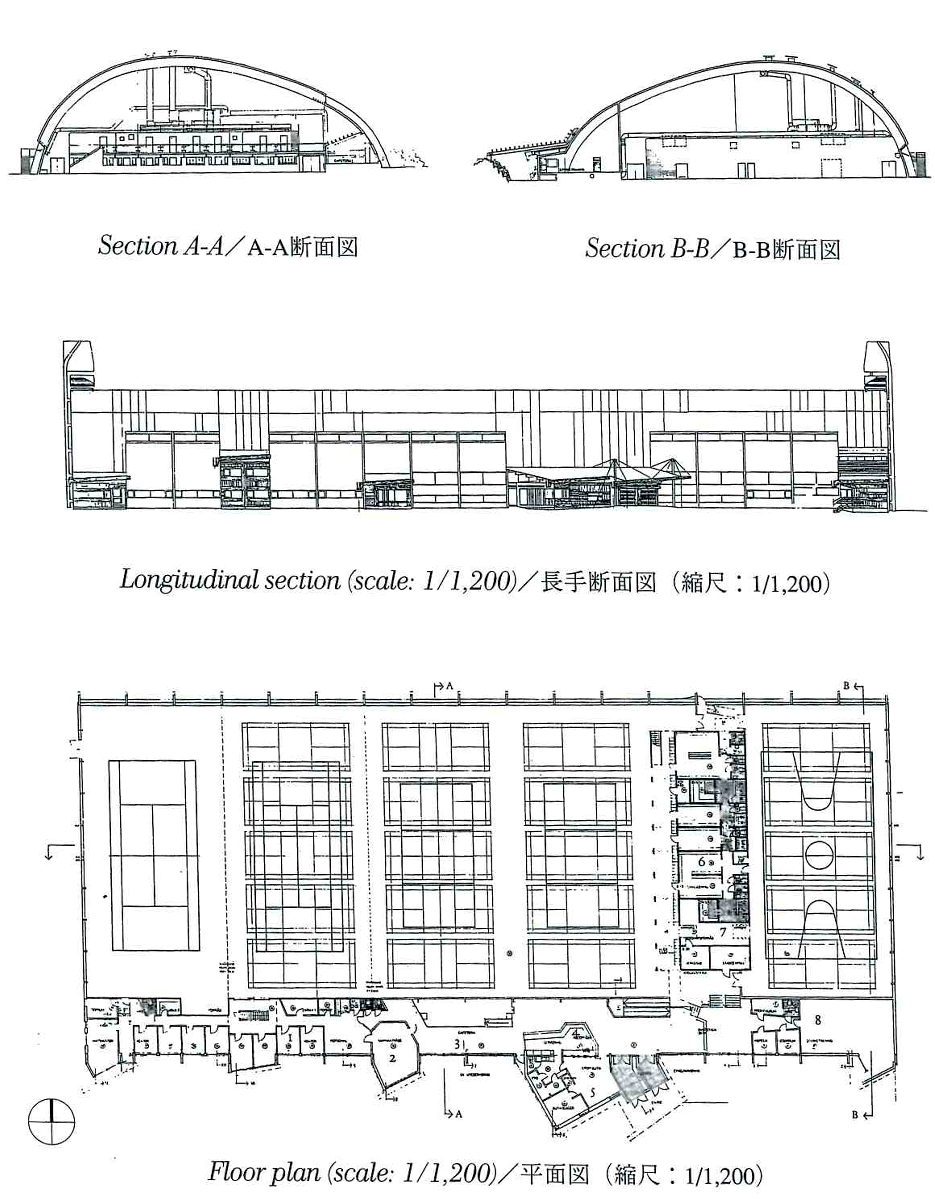 This project for the law student’s building began in 1989. Sited in an oak grove near the main student’s center building it has recognisable geometric plan form. The building shares the same roof detailing of external roof ties and timber facades. The plan form, although being formal, avoids the oak trees and uses the natural slope of the site. The ondulating roof form is a simple method providing a variety of internal spaces. 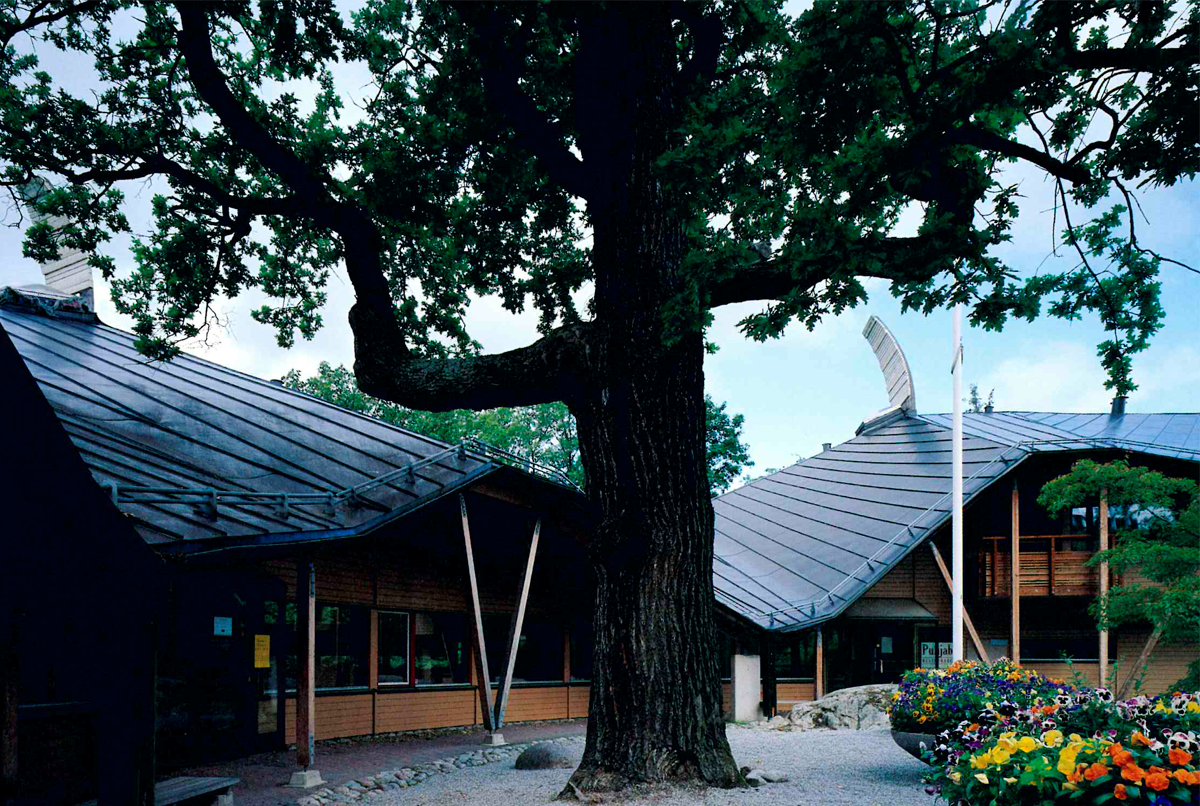 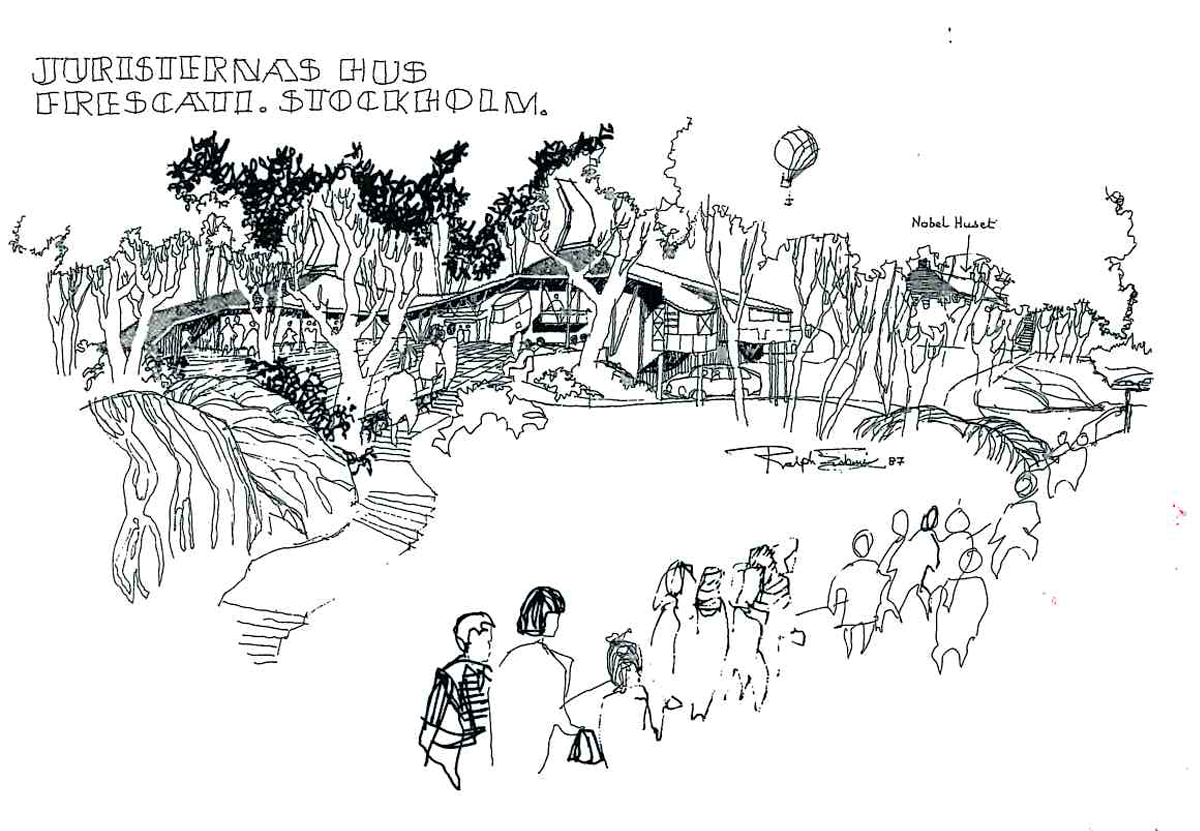 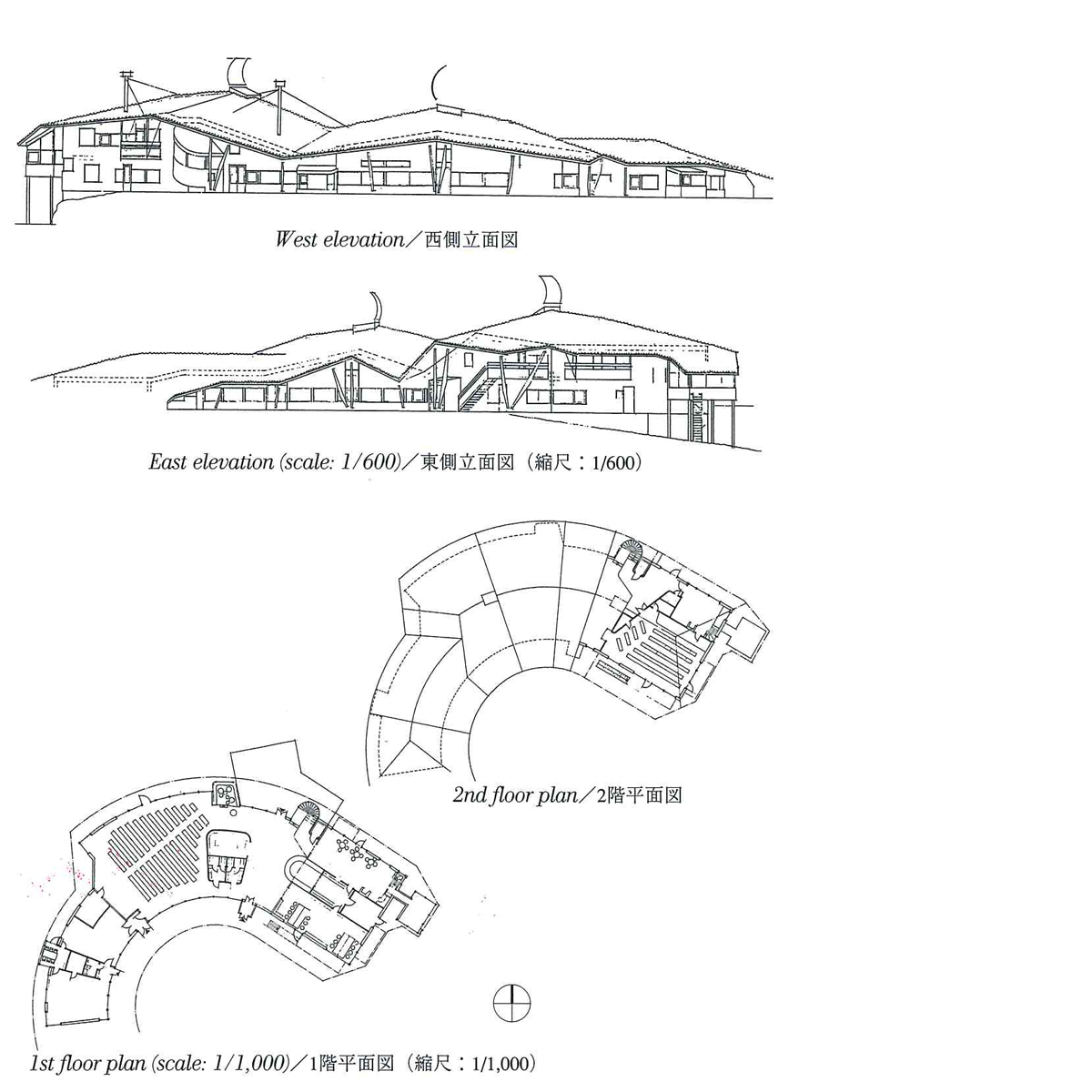 This building represents a classic approach, with a rational plan which interacts organically at its periphery. Based on traditional Greek theatres, the auditorium can seat 1.200 spectators or be divided into two by using a central moving partition wall. Unusual for this type of building, natural light is allowed into the auditorium space, through both windows in the flank walls and from sunlight reflectors placed directly above the auditorium. The building’s section exploits the natural typology of the site. A clear use of materials gives the building a strong character both internally and externally . To the south and facing the service courtyard the building’s facade are patchwork of coloured brickwork in a relaxed composition.

Bricks are cut and the backs of bricks are used to create a variety of texture in the patterinng. The north facades are predominantly glass with some timber infill. The extensive foyer space wrapping around this side of the building has provided the university with a space that students use regullarly for study. The interior ceiling material of random timber sections, timber floors and the white painted walls promote a pleasant environment. The quality of the interior is heightened through attention to detail in the handrails and the doors leading to the main hall.  The timber ceiling treatment in the auditorium is modelled to provide an optimal acoustic environment for speech presentations. 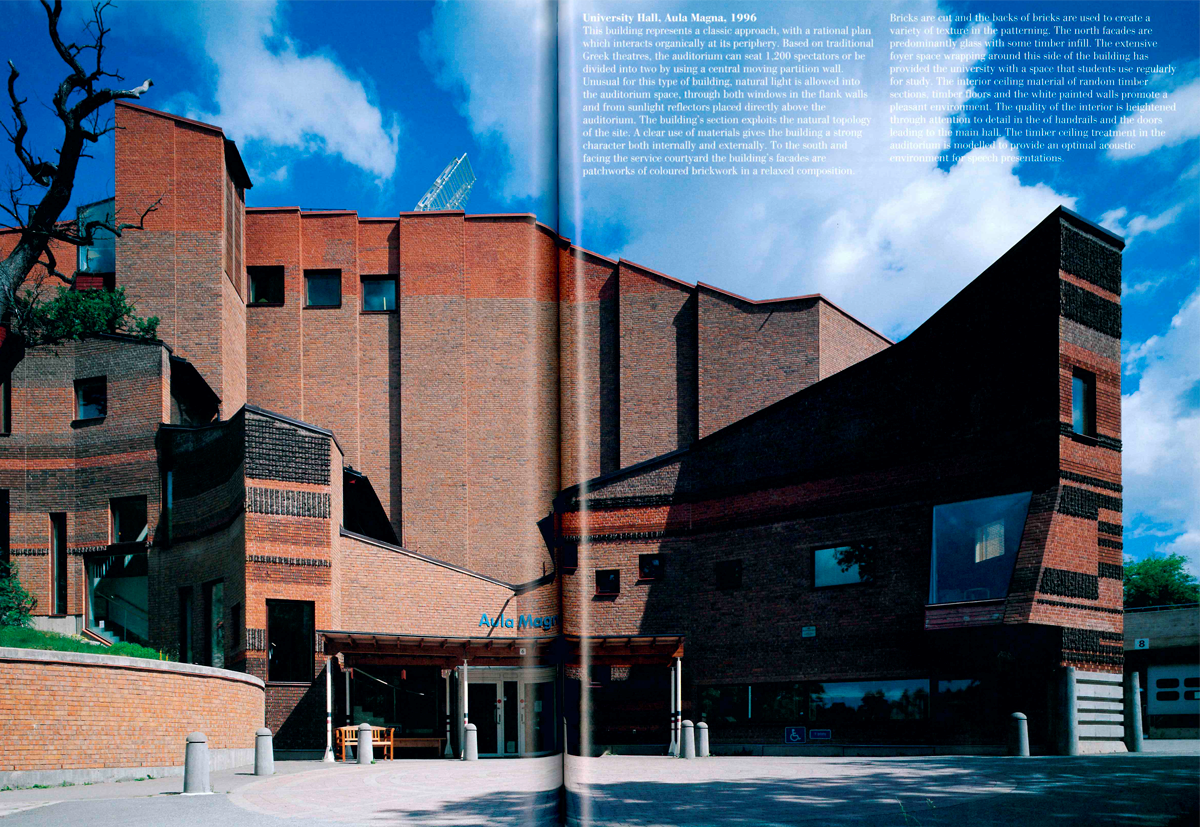 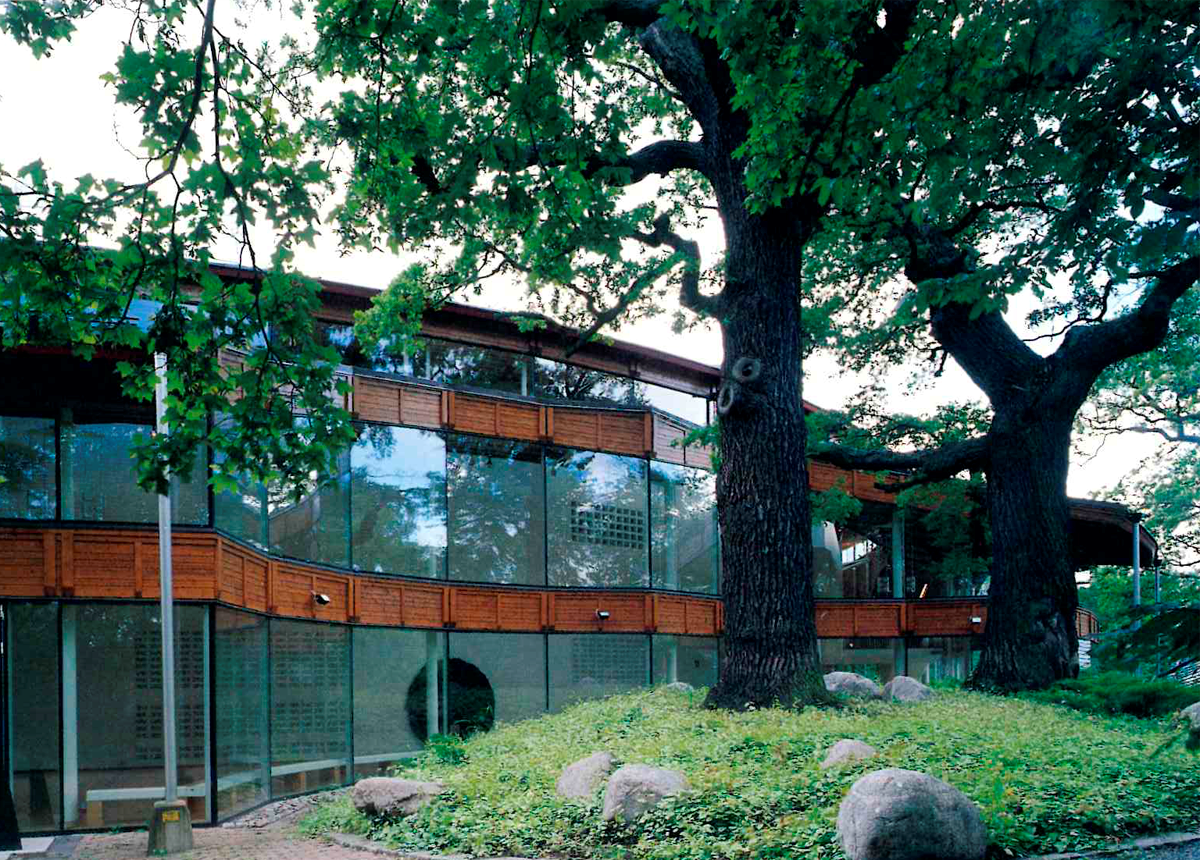 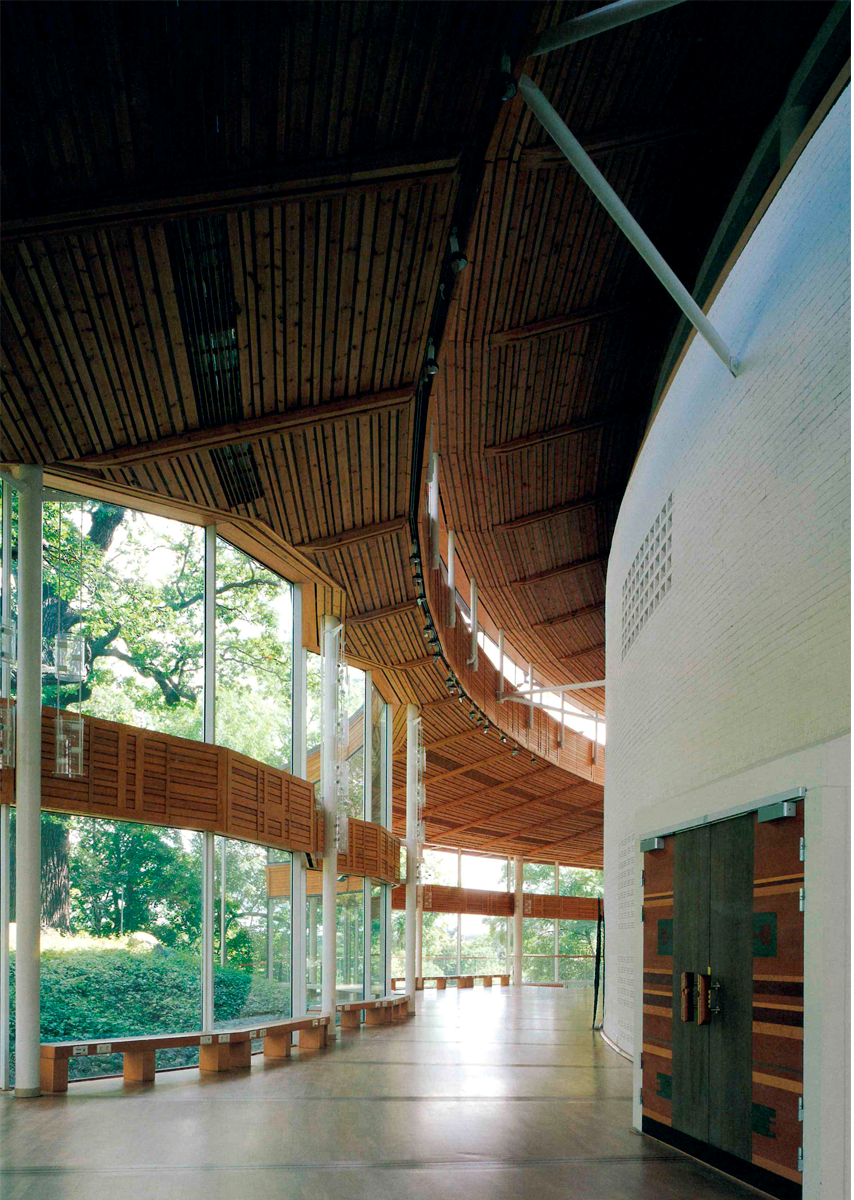 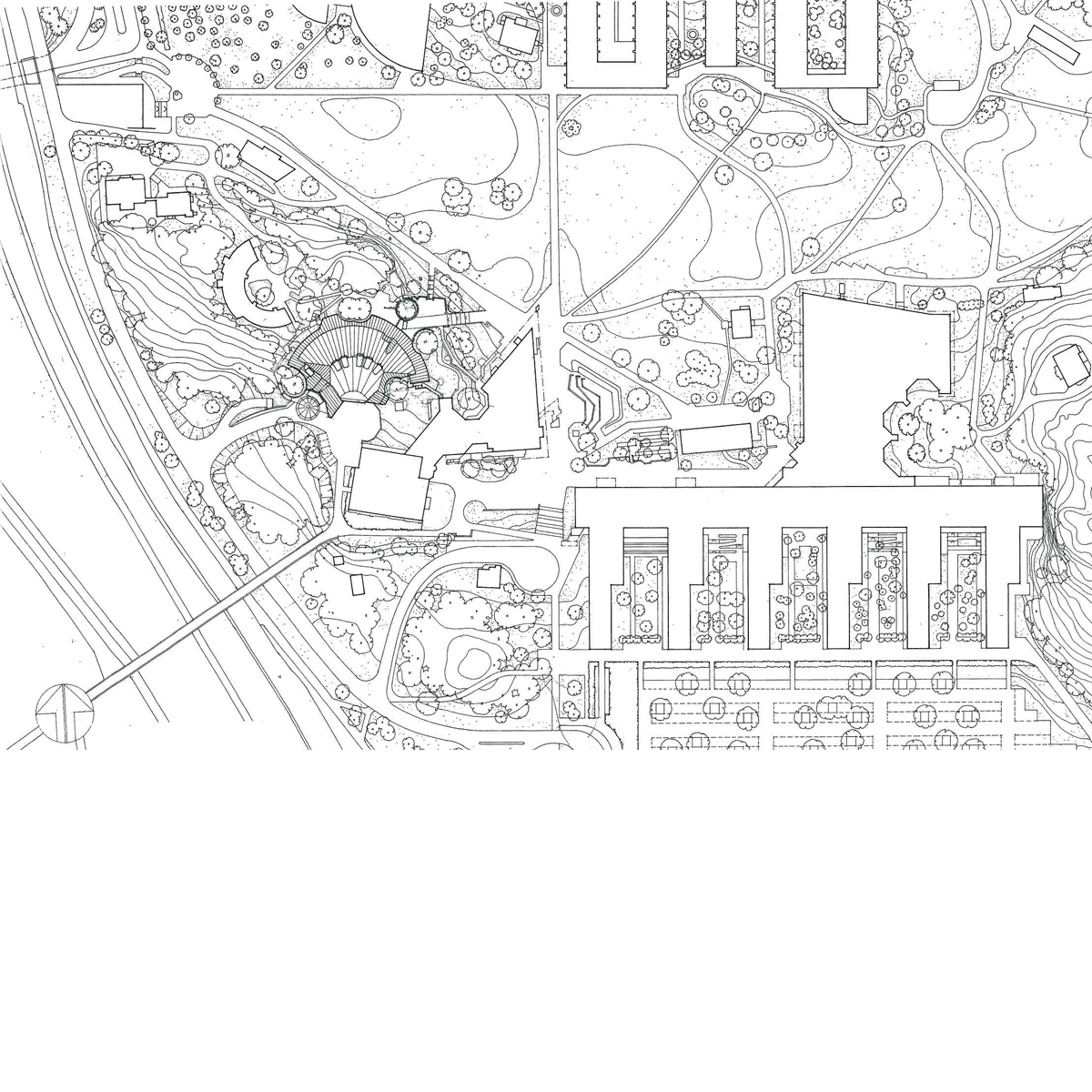 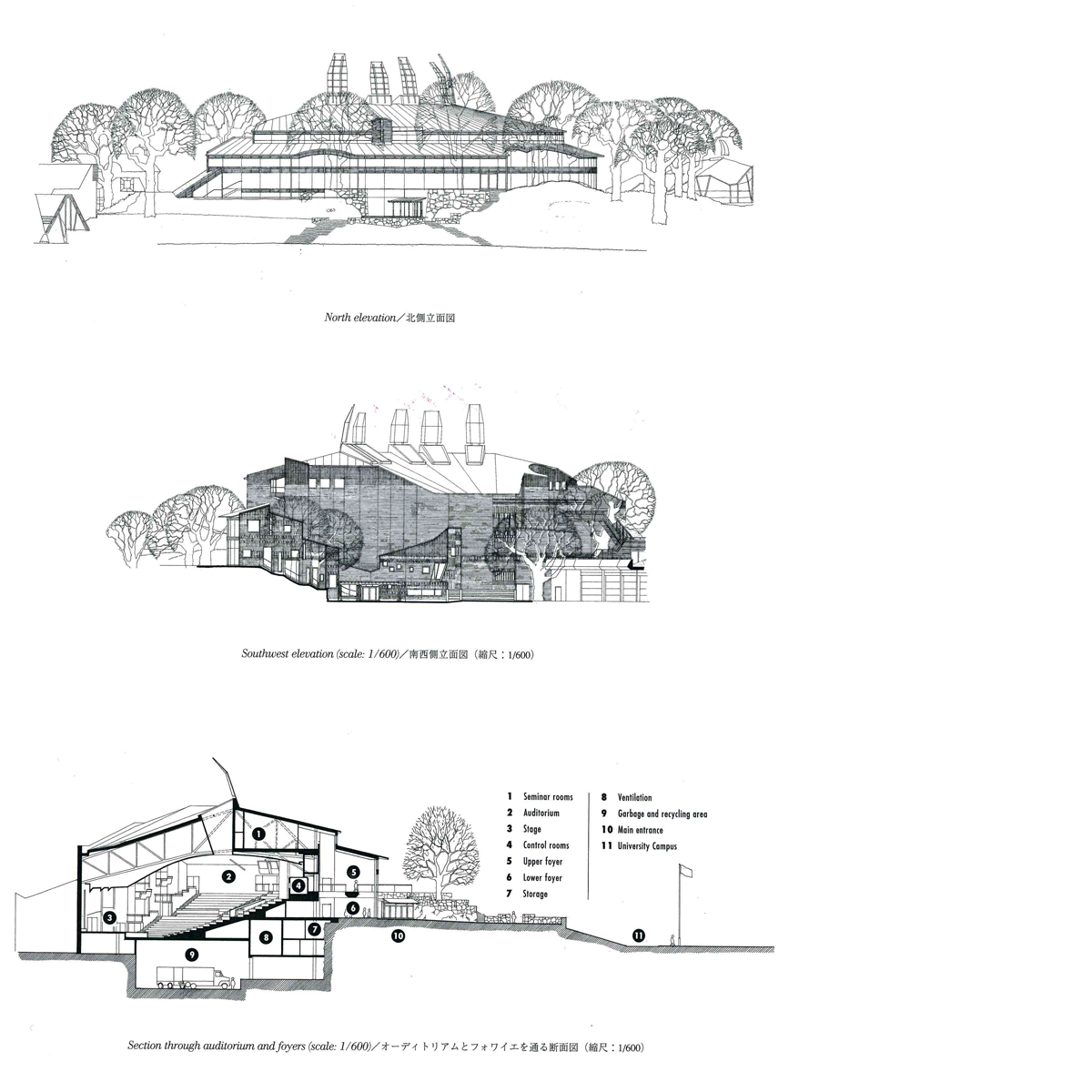 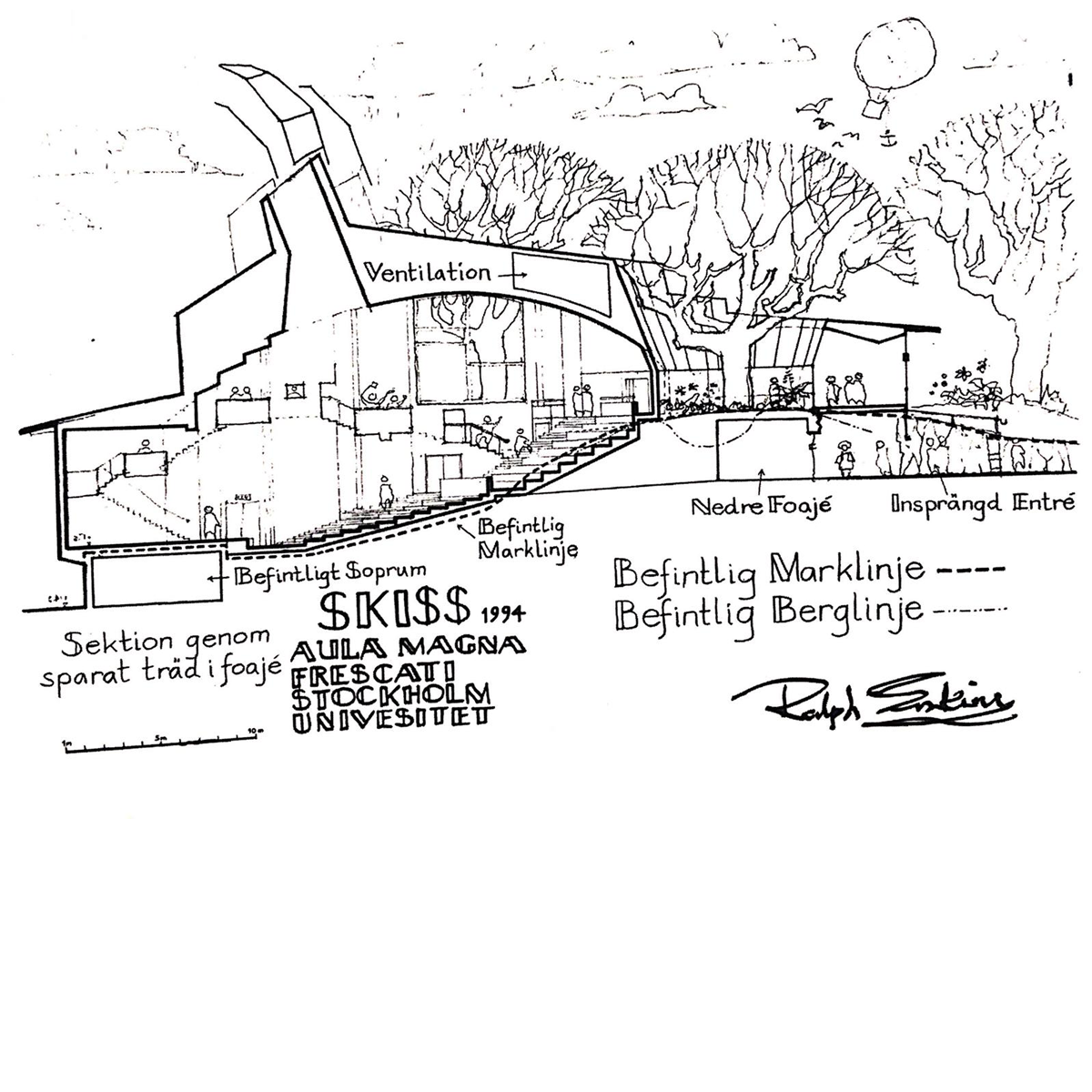