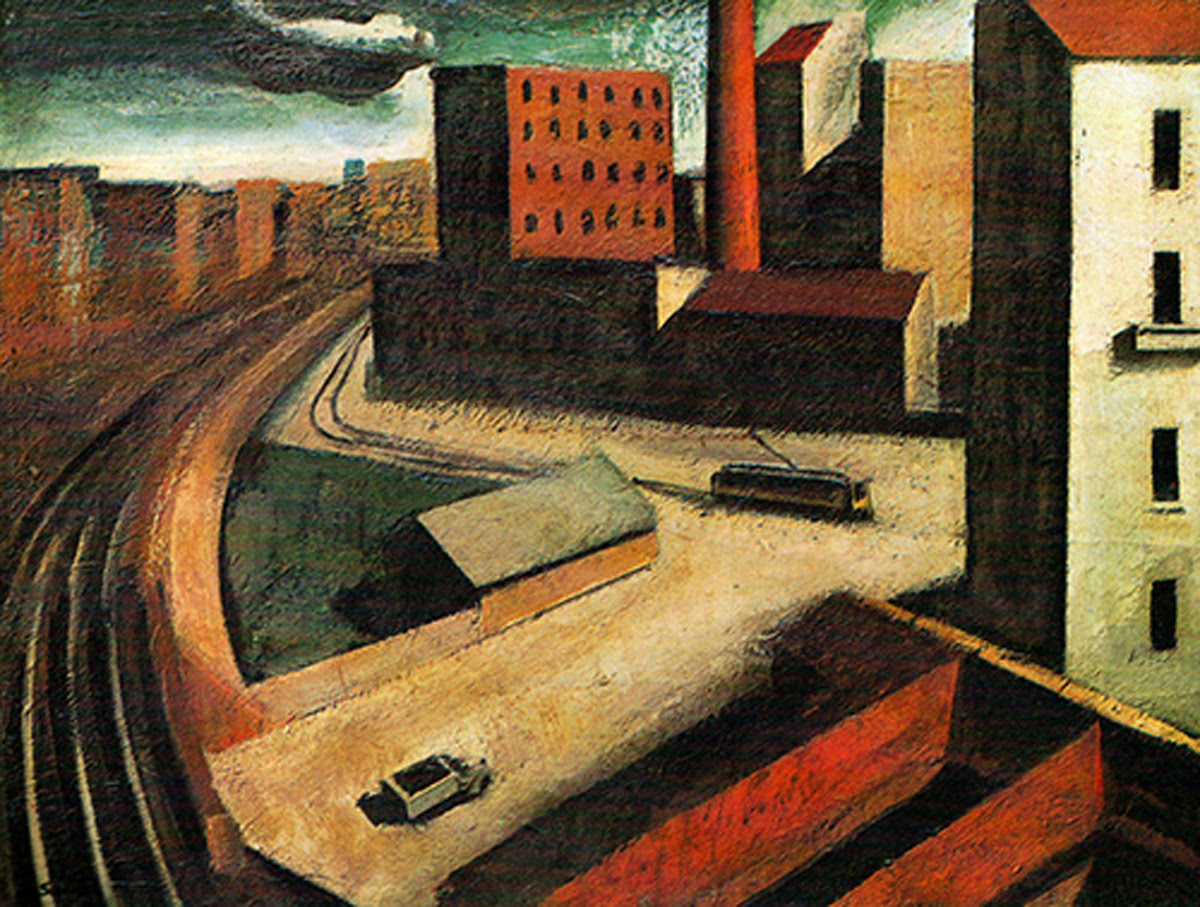 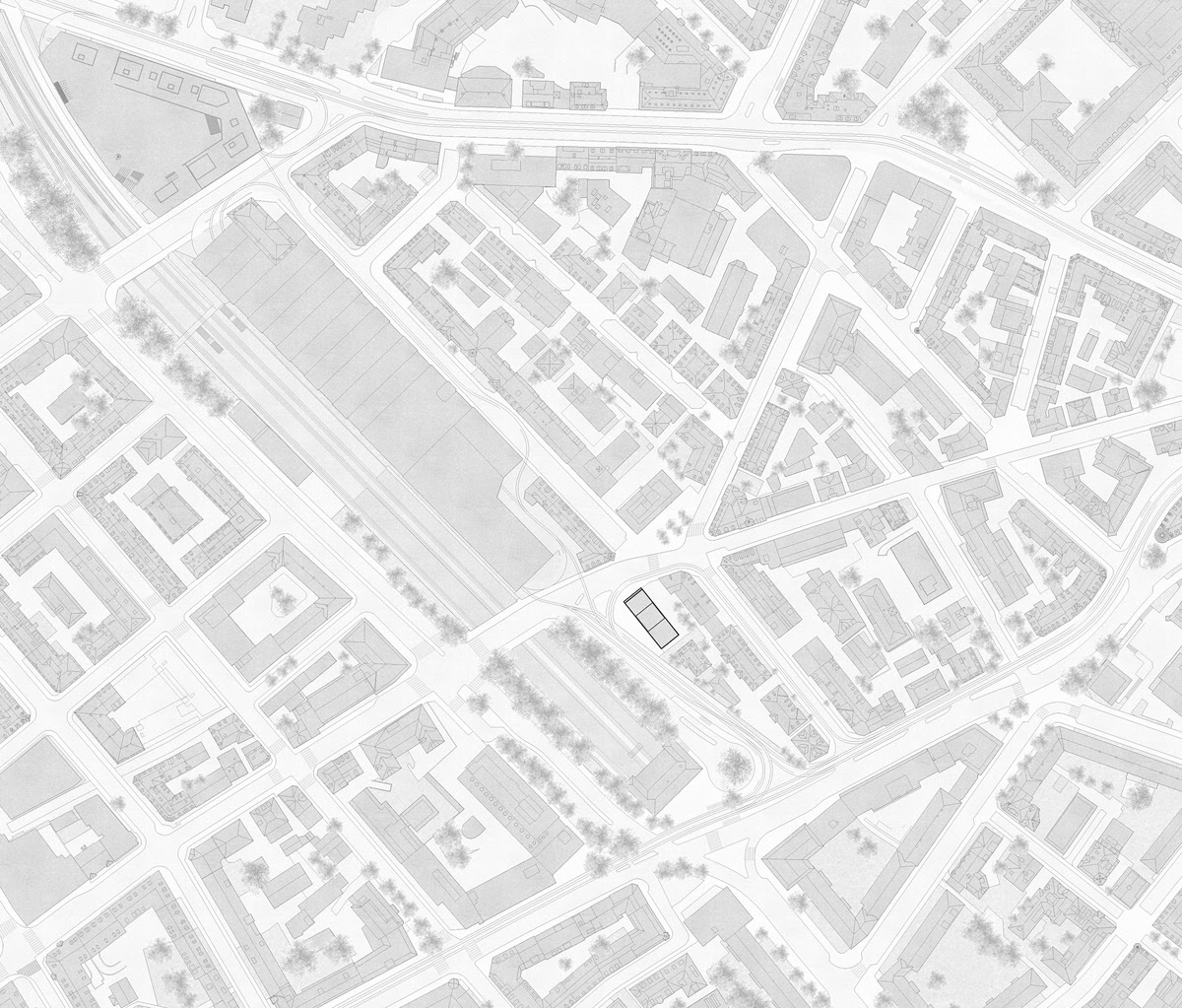 tópos
The site for the House of Music lies on the fringe of the Kreis 4 in Zurich. After a dense urban fabric of courtyard buildings containing small brick workshops, the city is suddenly severed in two by the train tracks of the Seebahn at the level of the site. This infrastructure scar leaves many of the surrounding buildings incomplete with bare firewalls staring into an urban void. Only the exceptional buildings of Hermann Herter around the rails and the train station have enough presence to address and sculpt the open space. The specific spatial configuration around the train tracks has given a melancholic atmosphere to the surroundings. The bars and design shops along the Zweierstrasse and the Ankerstrasse give way to more detached buildings, which seem devoid of human activity. This ambiance can be grasped in paintings like the periferia by Mario Sironi.

The existing surroundings of the plot are so dissonant that extending the Kreis 4 by simply completing one of the courtyard buildings would seem an inadequate and feeble gesture. The clear setting of the new building does not try to imitate or hide a given situation but is placed and articulated to answer all sides. A high and wide show façade addresses the empty space created by the rail tracks. In comparison to Herter‘s head-end building, the window grid is shifted, giving a horizontal dynamic to the building.
The narrow façade overlooks the Kreis 4 and its entrance is marked by an extrusion in the lower part of the volume. Together with the neighbouring buildings, the narrow façade creates a gate situation that serves as a border between two spatial worlds.

téchne
The building is made of brick walls and wooden floors. Both materials generate their features and qualities through their technical assemblage. A brick could merely be seen as a piece of mud but when assembled right, this element can create a wall with the capacity to generate numerous atmospheres and textures.

The conceptual clarity of the construction is achieved by a brick bond of face brick and insulated brick. This building system generates one massive wall of continuous brick without expansion joints. The bond changes slightly from floor to floor: the wall thickness decreases in steps to create supports for the wooden floors. These consist of Lignatur elements that span the whole ten meters width. The width of the building can always be felt through interior spaces that reach from one façade to the other.

On the ground level, the entrance leads to a reception area and a restaurant, which connects the front façade to the back garden. The first floor offers views towards Kreis 4 from the bar as well as the pleasant sight of the old trees along the rail tracks from the concert hall. The higher levels are meant for the quotidian life of the in-house musicians. They are organized as an open space that serves as office and leisure space. The practice rooms are physically detached boxes constructed in heavy limestone brick. Atmosphere derives from a combination of materiality and light. The façade brick has jura yellow and rust colours on the exterior and a limestone colour in the first floor’s interior. The music boxes on the upper floors are painted white but still reveal the brick pattern. The windows express the varying thickness of the wall. Deep windows on the ground level indicate the entrances and represent the idea of a plinth. On the upper floors the windows are flush to the outside face brick and promote the thin textile qualities of brickwork. In the interior, the same windows offer pleasant niches to sit in and observe the city. The roof terrace only opens to the sky. The closed wall reinforces the solidity of the building towards the outside whilst offering a calm retreat from the bustling city on the inside. 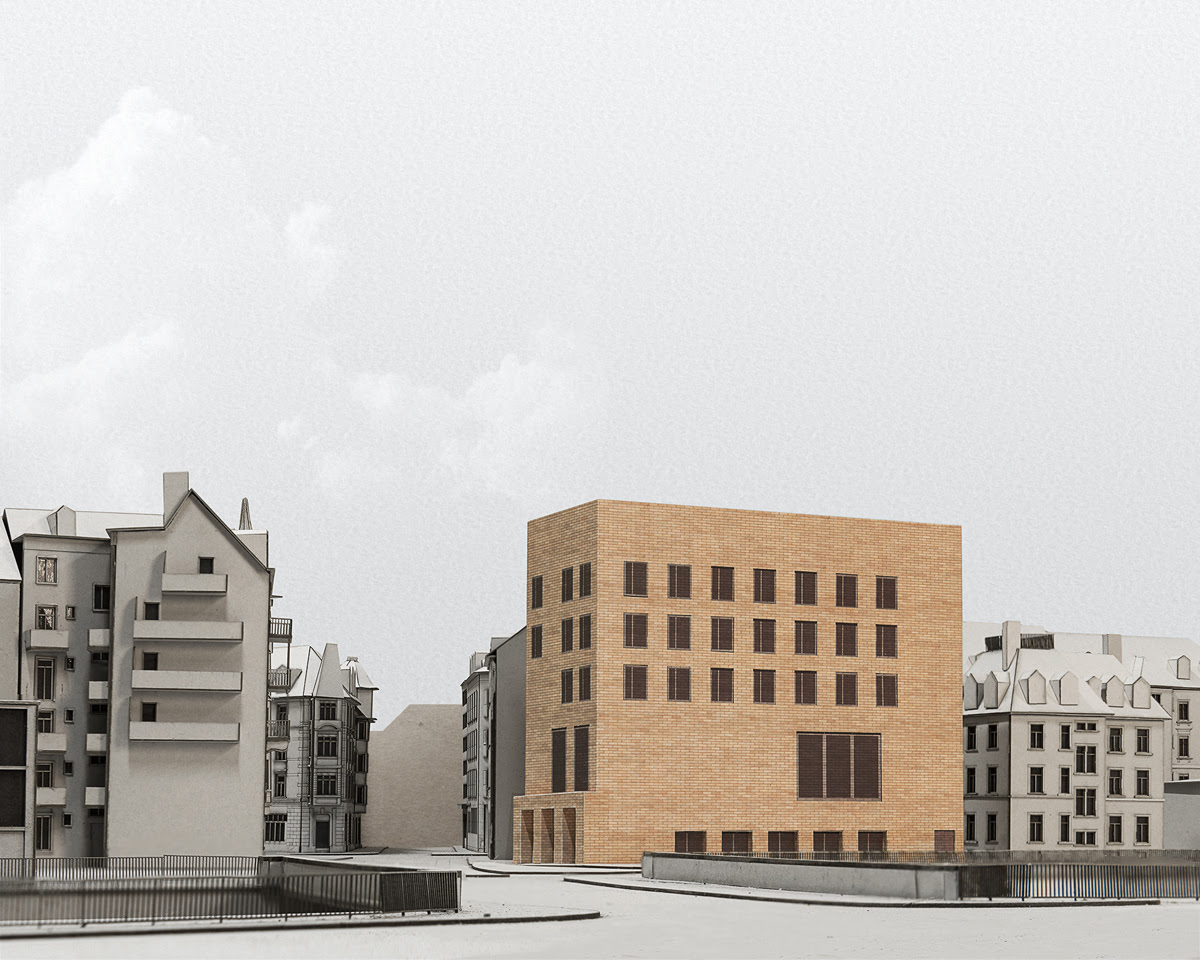 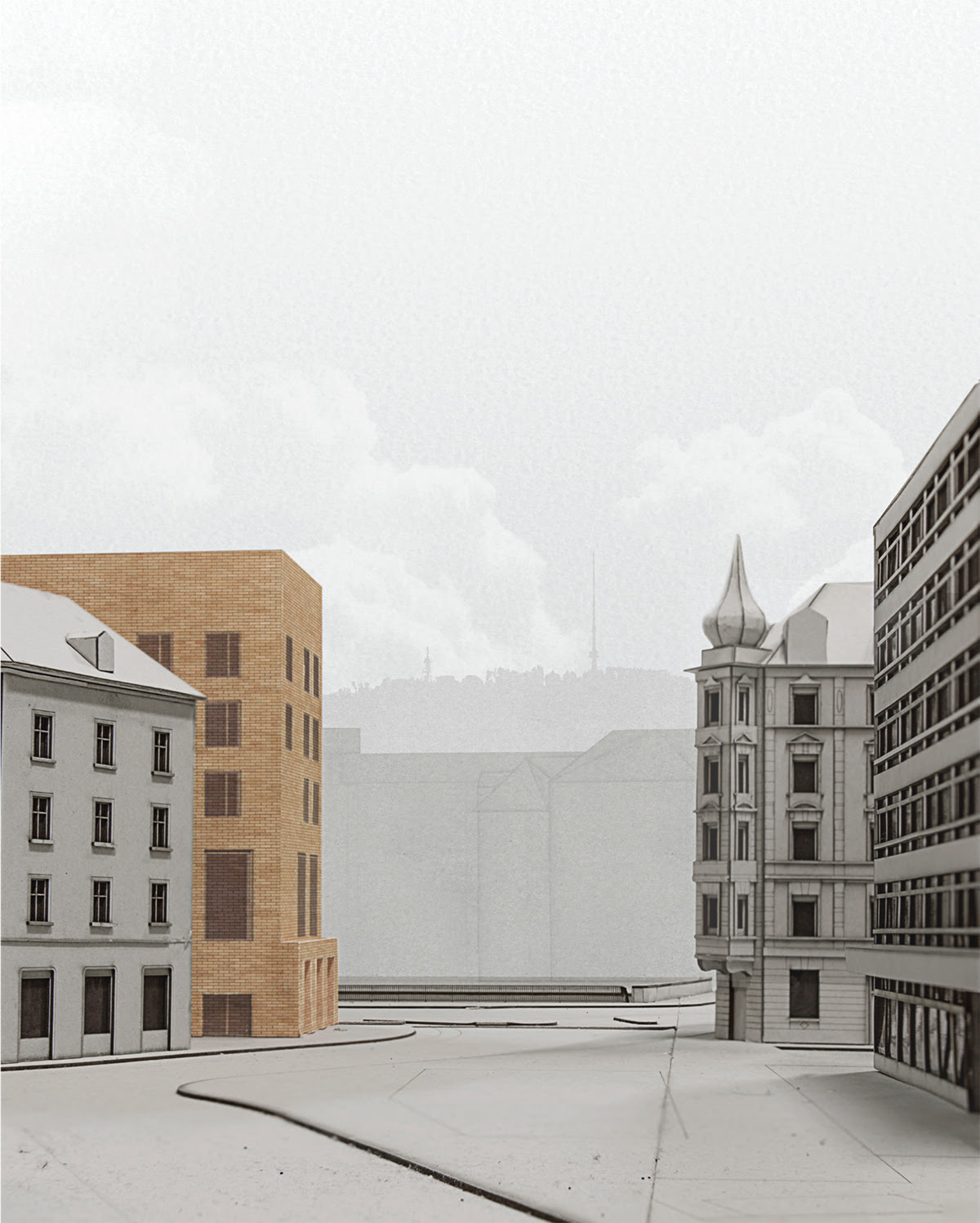 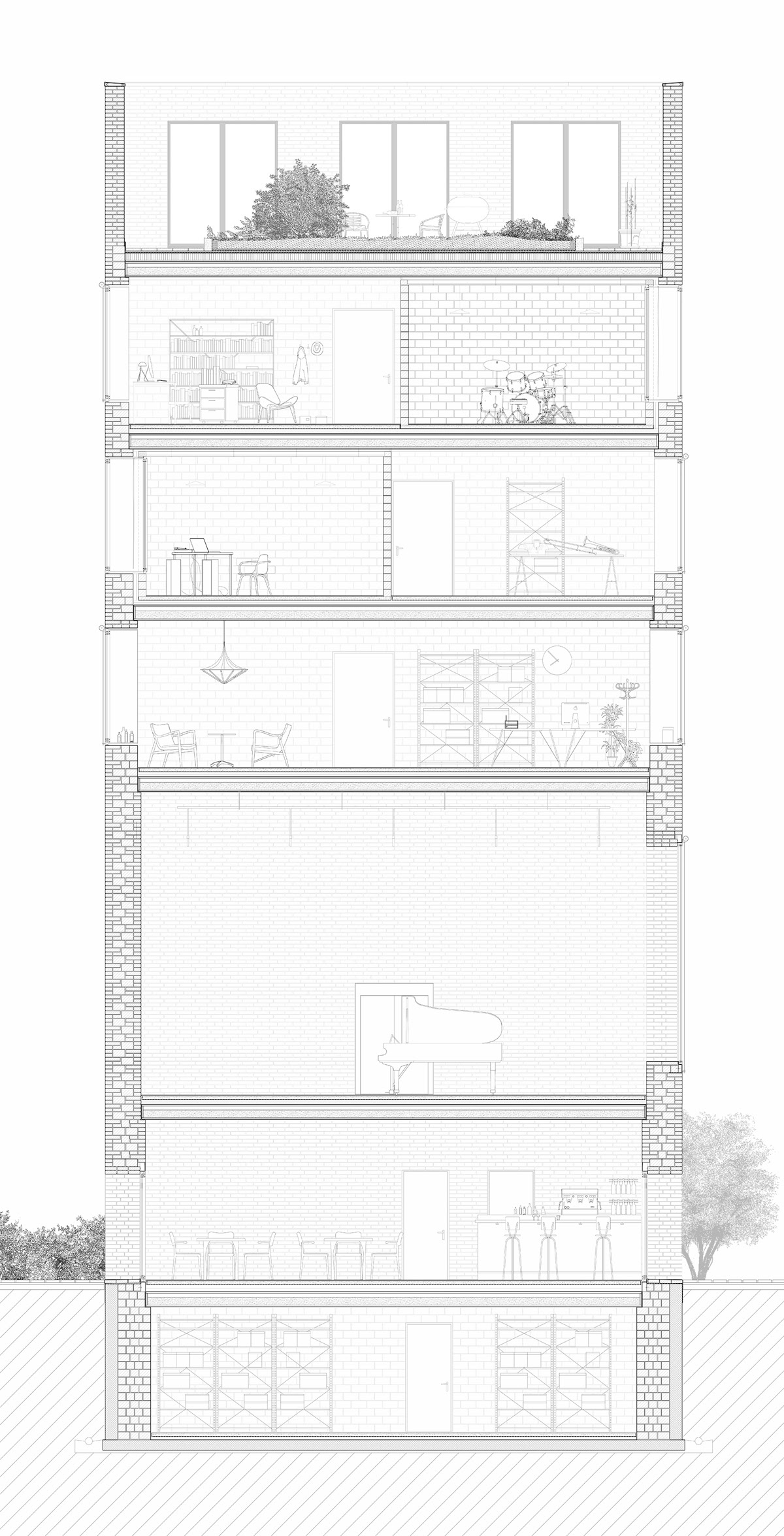 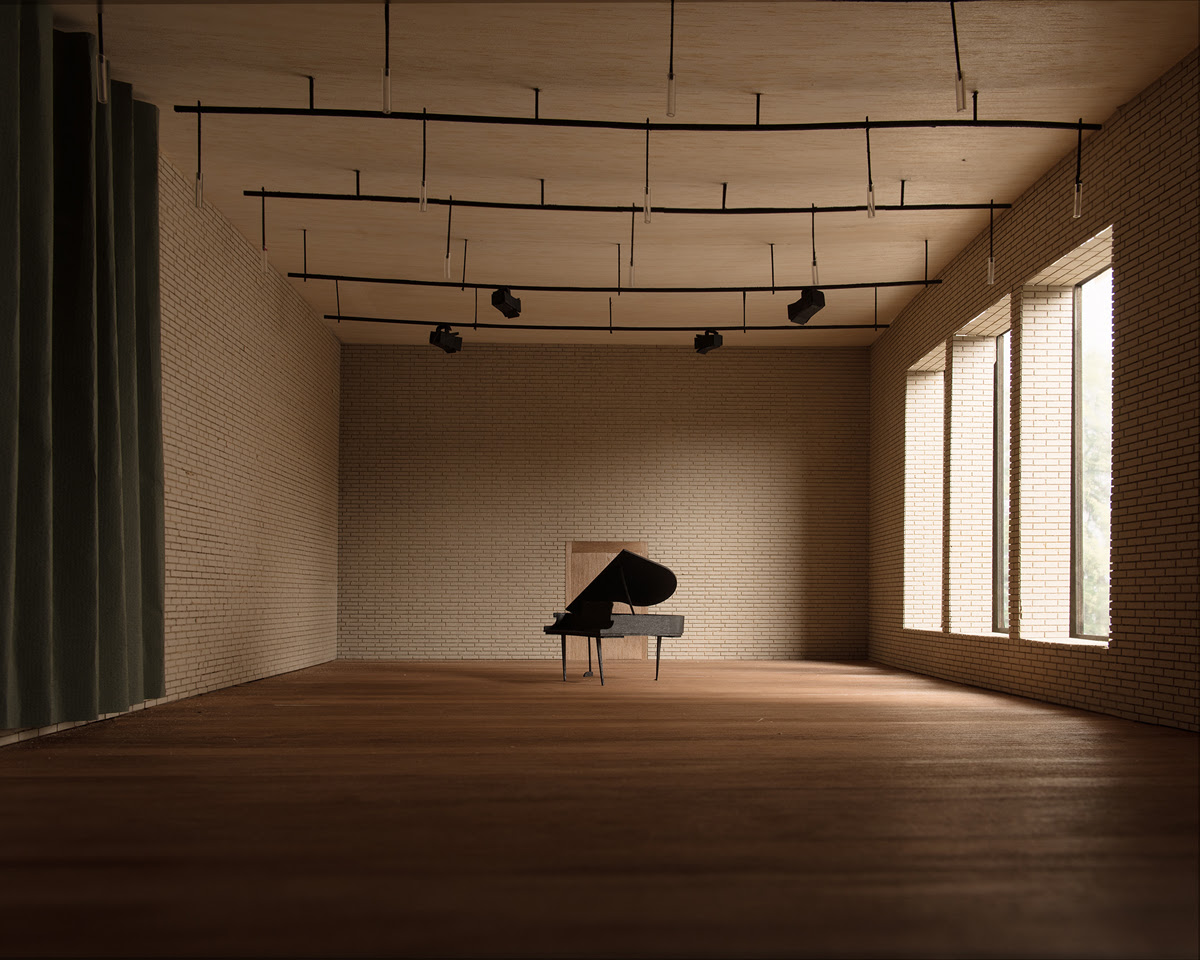 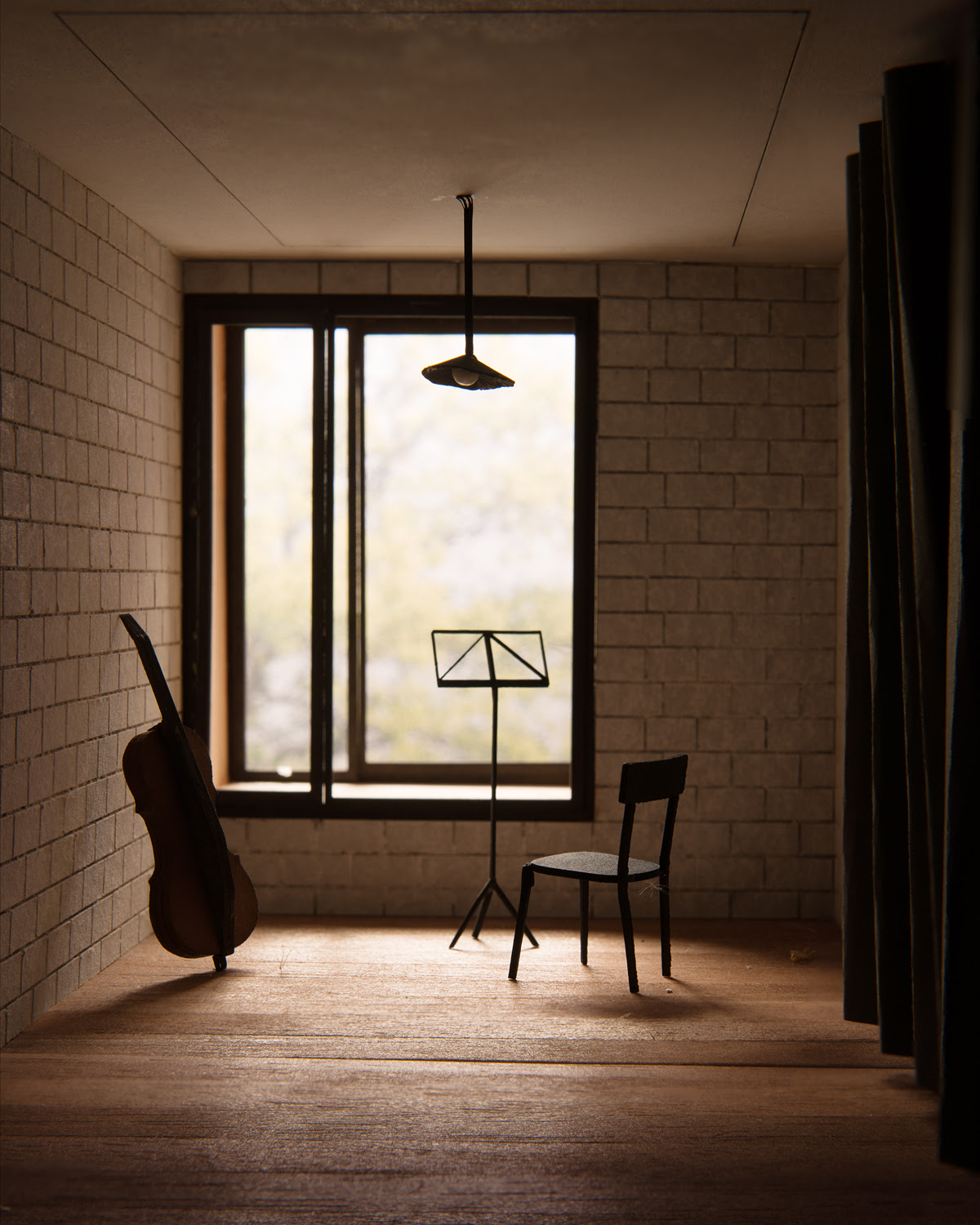 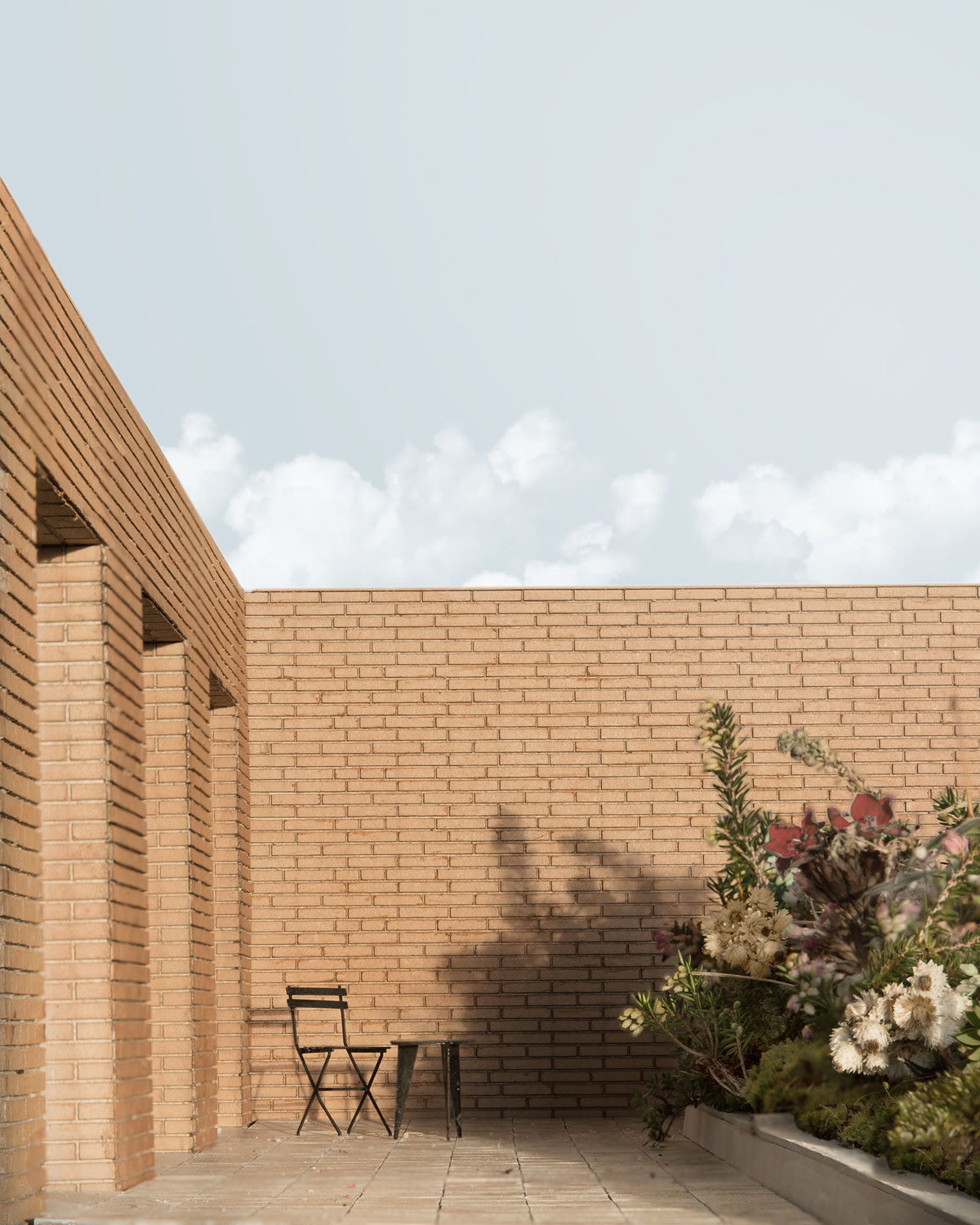