The project for a crèche for 80 children and 17 social housing apartments was commissioned by the Fondation de la Ville de Geneve pour le Logement Social (the City of Geneva Foundation for Social Housing) and won in a competition held in 2006 by Sergison Bates architects and Jean-Paul Jaccaud Architectes. Completed in 2011, it is now fully occupied.

The new building seeks to mediate between two distinct urban situations: the consistent urban texture of the Rue Rousseau, with buildings of significant presence such as the Ecole Ménagère des Jeunes Filies by Philippe Barras and Alexandre Camoletti on the one hand, and the Mont-Bianc/Cendrier Centre by Marc Saugey on the other.

These two adjacent constructions are reconciled in the way that the new building absorbs a number of spatial and volumetric elements, like the podium, arcade and facetted tower forms of Saugey’s building, and continues the street edge and tri-partite ordering of the Ecole Ménagère. In this way, like a puzzle assembled from a number of building blocks carefully placed together, a new building emerges, specific to its place in the city, yet seemingly universal in its urban character.

Just as the new form seeks to stitch and weave itself into the texture of the city, so too the façade describes a rich and layered tectonic assembly of finely stacked elements. Our interest has been to describe the façade as a representation of structure (rather than a tracing of the structure itself), giving a sense of permanence and weight to the wall. In this way the expression of solidity embodied in its making contributes both to the definition of urban blocks and gives an appropriate expression of enclosure and protection -the pre-requisites for the creation of a feeling of home.

The vertical emphasis given to the facades engages with the homogeneous facades frontage of the 18th and 19th century city and the storey-height proportion of the Saugey towers. At a greater scale the tectonic stratification of top, middle and base, each quietly adjusted to describe programme, increases daylight penetration and achieves continuity with adjacent building lines.

The building’s surface is ground and fine. The precast concrete elements have a polished finish -like a worn creamy grey stone. They are stacked in large T and M shapes to create a monolithic surface. Canvas blinds and light bronze anodized windows provide a further layering to the surface, displaying the activity of occupation within the subtly shifting order of the tectonic façade.

The wall that at once conceals and reveals, also mediates between public space and private intimacy. From the inside, the rhythm of internal reveals (between full height window assemblies) defines an internal territory of clearly defined rooms. The relationship between room and city can be adjusted through the combination of canvas blinds for shading, inward opening windows for ventilation and full height curtains for privacy.

As in the small courtyards prevalent in the St. Gervais district, with their atmosphere of intimacy and neighbourliness, access to the apartments is via an alley (Rue Rousseau) leading toa small open court, with gallery access providing a shared semi-private threshold between apartments. Apartments are organised around the perimeter on all four sides, with central halls connecting the principal rooms in a continuous spatial sequence.

The building is inserted into the existing urban structure of arcades, covered walkways, alleys and yards, with a variety of openings and routes that create a sense of permeability within a dense city block. A new arcade extends the covered pavement previously established by Saugey, making it possible to walk down the length of Ruede Cendrier under cover.

Just as the entrance to the Community lnformation Centre has the familiar detail of a shopfront, so too the entrance to the creche is reminiscent of the open-air passages experienced as ‘cut-throughs’ in Saugey’s Mont-Bianc Centre. A long view through the creche foyer is created to the rear courtyard, a shaded and secure playspace for the children. In the same way that the activities of the creche are brought into the view of the passer-by at ground level, further acknowledgement is achieved at the second floor level where a fulllength, open sided veranda links each of the play rooms together to form a gallery of activity and energy. Audible from the street below when opened and shaded, the veranda makes a highly visible addition to city life, contributing as it does to the ‘essence’ of the city, a place to live and call home. 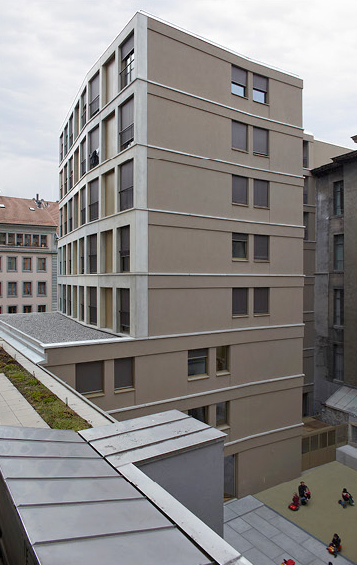