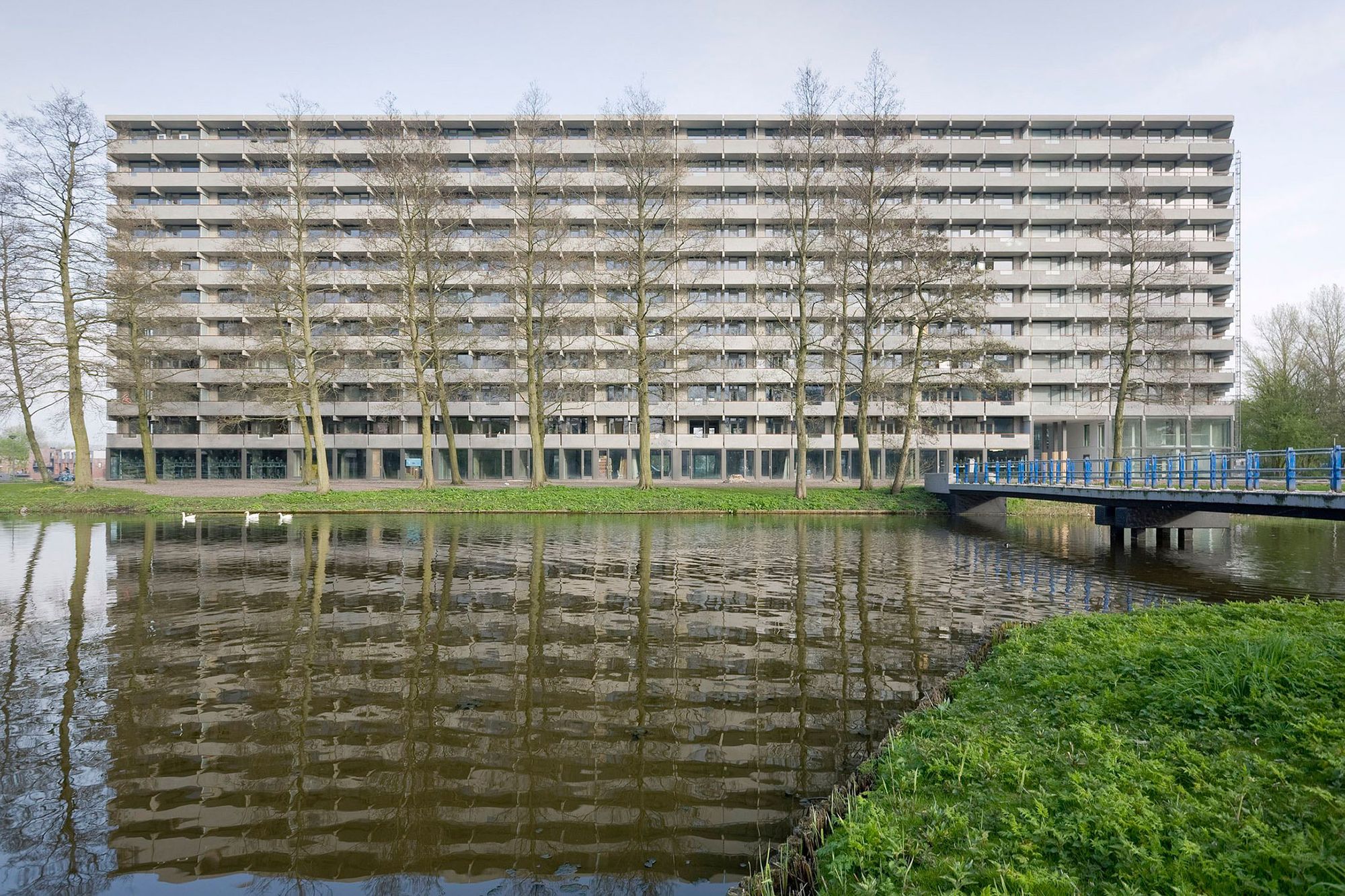 Dutch studios NL Architects and XVW Architectuur have won this year’s Mies van der Rohe Award for their innovative renovation of a dilapidated 1960s apartment block on the edge of Amsterdam.

The do-it-yourself concept behind the project saw the architects refurbish structural and communal areas, but left the inhabitants to oversee the fit-out of their individual homes. British practice OMMX recently proposed a similar scheme for north London known as Naked House.

De Flat is an innovative renovation of one of the biggest apartment buildings in the NL called Kleiburg, a bend slab with 500 apartments, 400 meter long, 10 + 1 stories high.

Consortium De FLAT rescued the building from the wracking ball by turning it into a Klusflat meaning that the inhabitants renovate their apartments by themselves.

Kleiburg is located in the Bijlmermeer, a CIAM inspired residential expansion of Amsterdam.

A renewal operation started mid nineties. Many of the characteristic honeycomb slabs were replaced by suburban substance, by ‘normality’.

Kleiburg was the last building in the area still in its original state; in a way it is the “last man standing in the war on modernism”.

The idea is to renovate the main structure -elevators, galleries, installations- but to leave the apartments unfinished and unfurnished: no kitchen, no shower, no heating, no rooms. This minimizes the initial investments and as such creates a new business model for housing in the Netherlands.

Most attempts to renovate residential slabs in the Bijlmer had focused on differentiation. The objective: to get rid of the uniformity, to ‘humanize’ the architecture. By many, repetition was perceived as evil.

But after three decades of individualization, fragmentation, atomization it seems an attractive idea to actually strengthen unity: Revamp the Whole!

It is time to embrace what is already there, to reveal and emphasize the intrinsic beauty, to Sublimize!

In the eighties three shafts had been added including extra elevators: they looked ‘original’ but they introduced disruptive verticality. It turned out that these concrete additions could be removed: the elevators could actually be placed inside the cores, the brutal beauty of the horizontal balusters could be restored.

On the galleries the division between inside and outside was rather defensive: closed, not very welcoming. The closed parts of the facade were replaced with double glass. By opening-up the facade the ‘interface’ becomes a personal carrier of the identity of the inhabitants, even with curtains closed…

Sandblasting the painted balusters revealed the sensational softness of the pre-cast concrete: better than travertine!

Originally the storage spaces for all the units were located on ground level. The impenetrable storerooms created a ‘dead zone’ at the foot of the building. By positioning the storage on each floor we could free up the ground floor for inhabitation, activating it to create a social base and embedding the ‘beast’ in the park.

More generous, double height connections between both sides of the building were formed creating scenic relationships.

Gallery illumination has a tendency to be very dominant in the perception of apartment buildings with single loaded access. The intensity of the lamps that light up the front doors on the open-air corridors overrules the glow of the individual units. The warm ‘bernstein’ radiance of the apartments is ‘obscured’ by a screen of cold lights. But what if the gallery lights worked with energy saving motion detectors? The individual units now define the appearance. Every passer-by a shooting star! 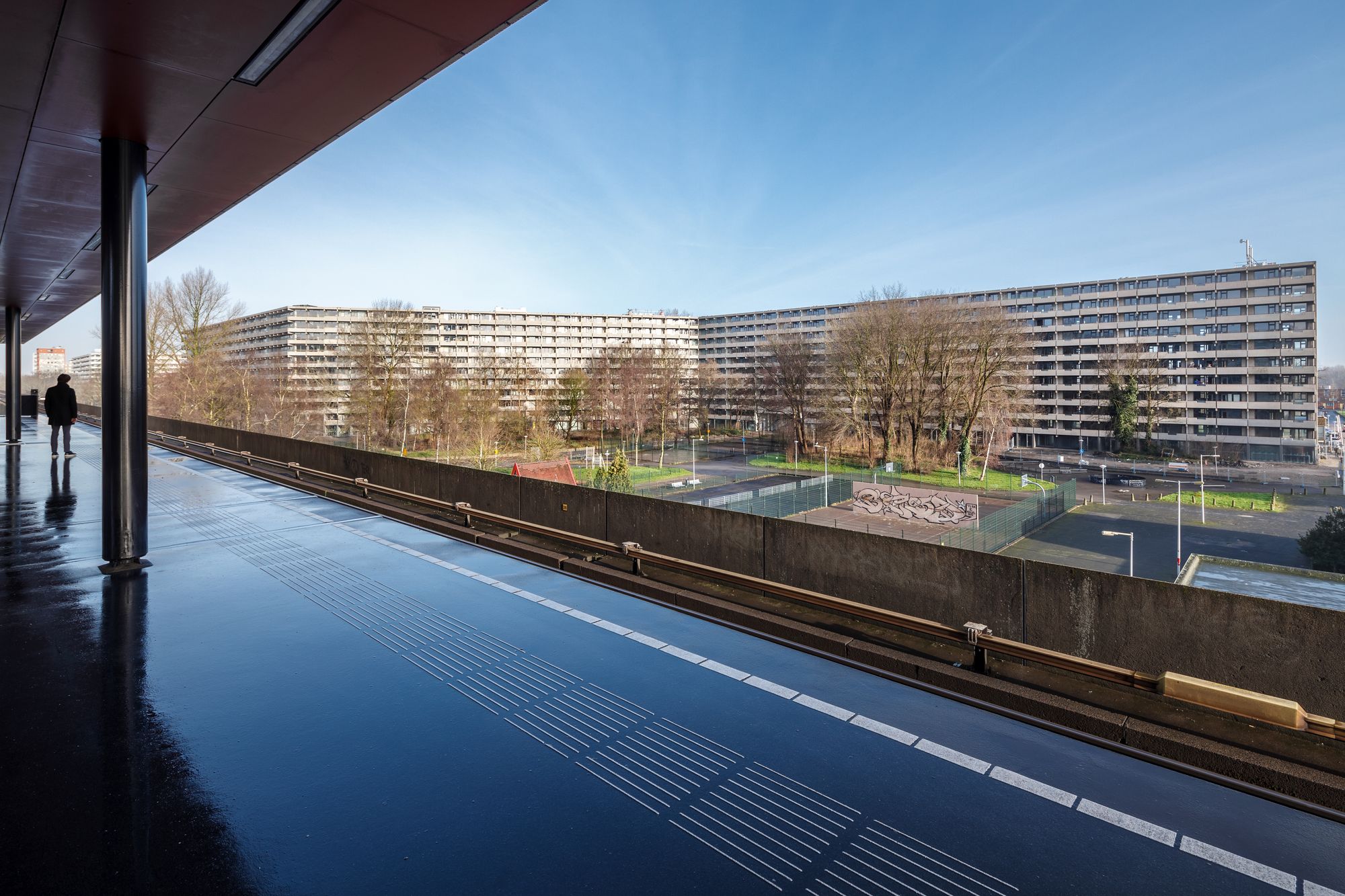 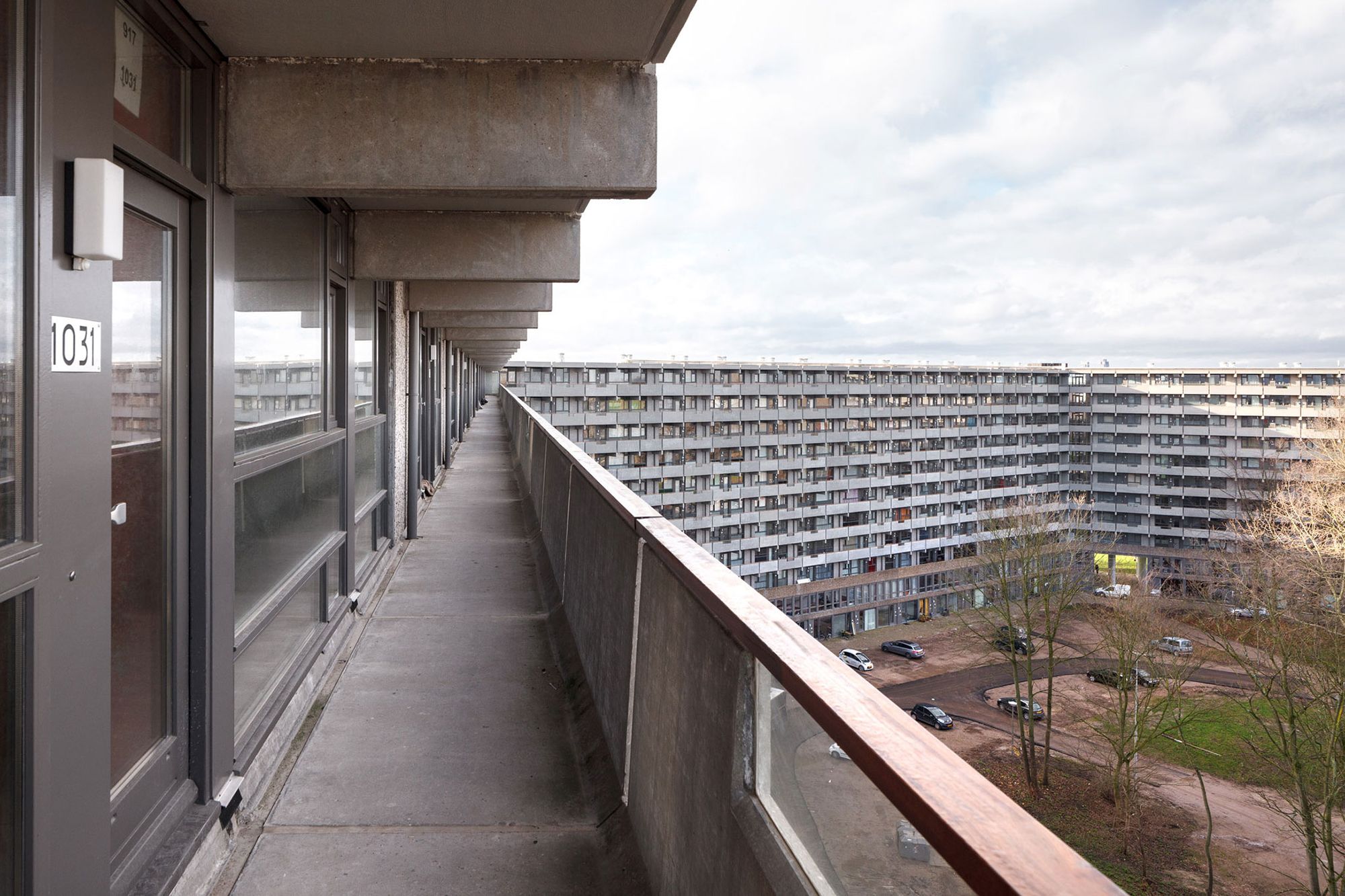 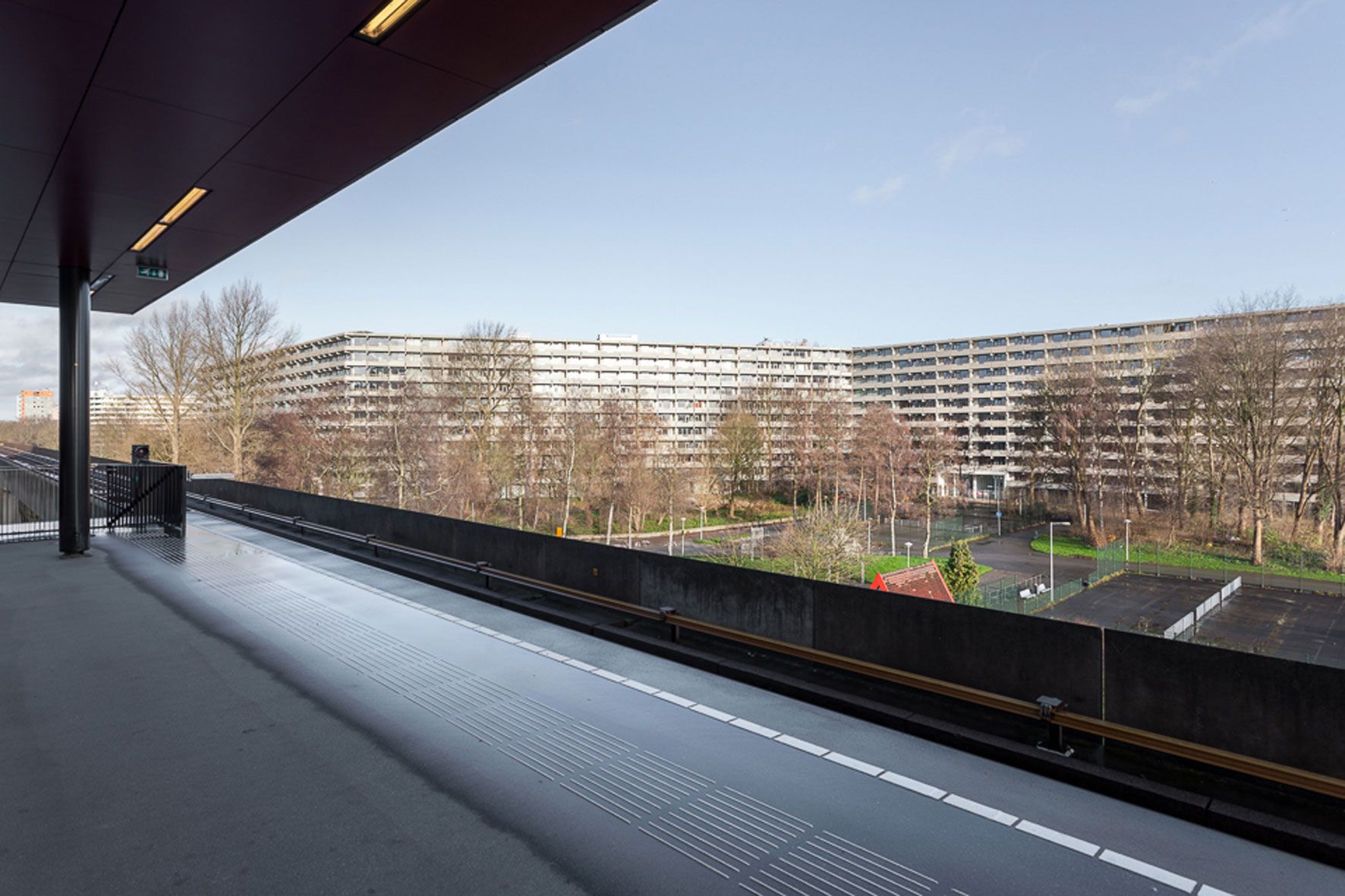 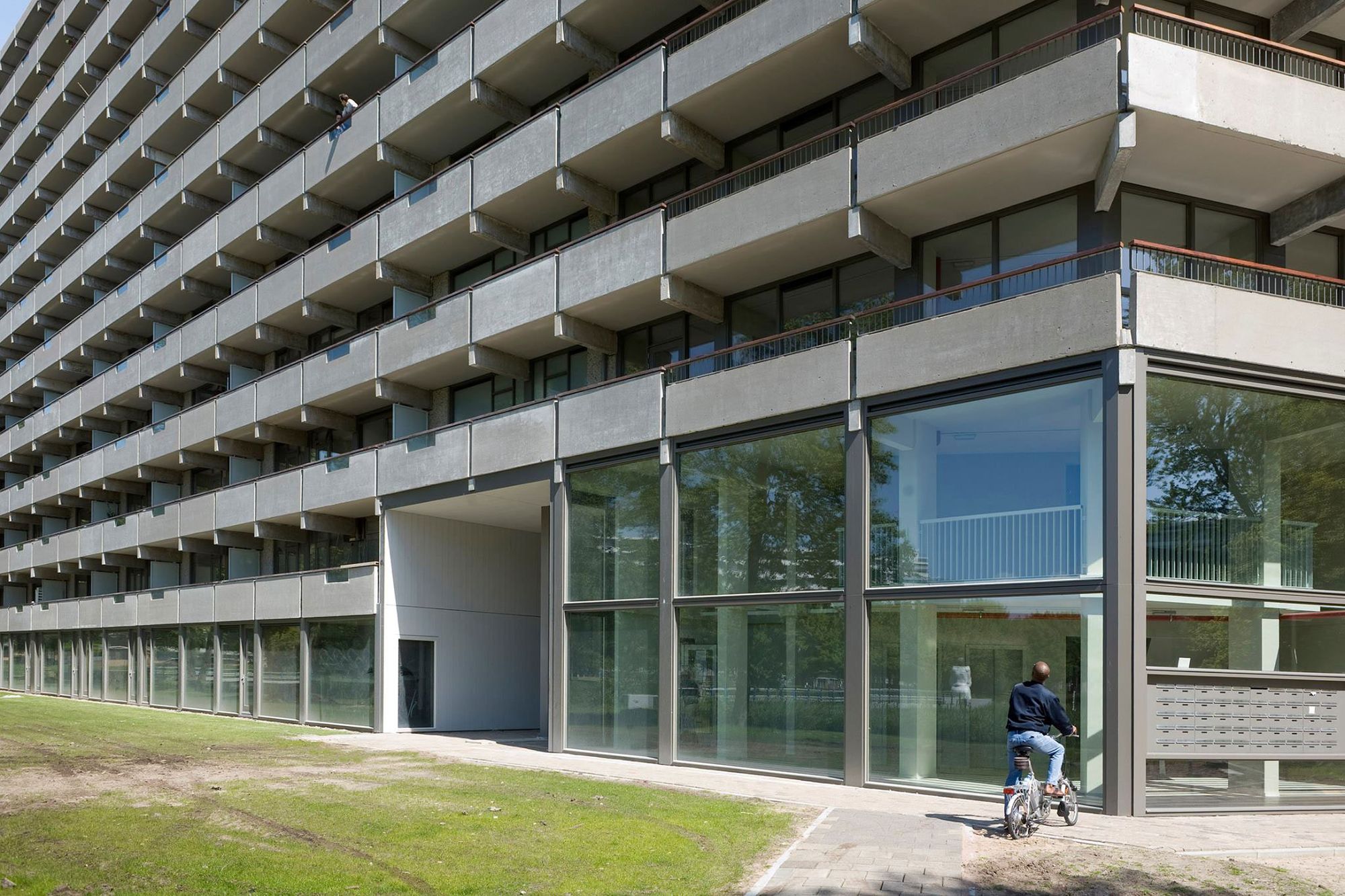 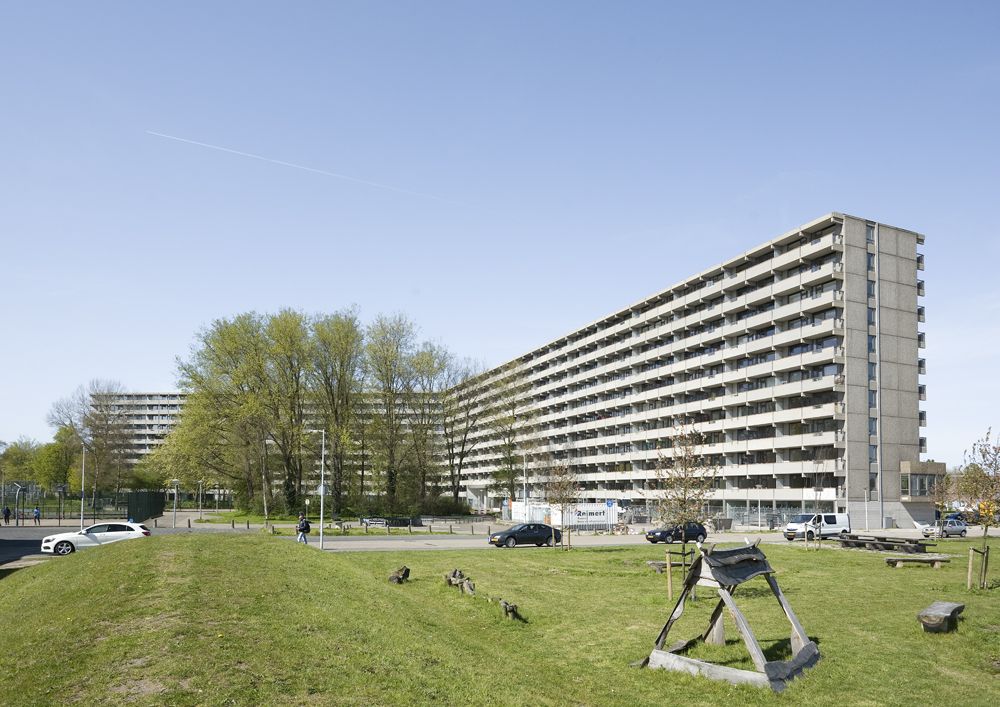 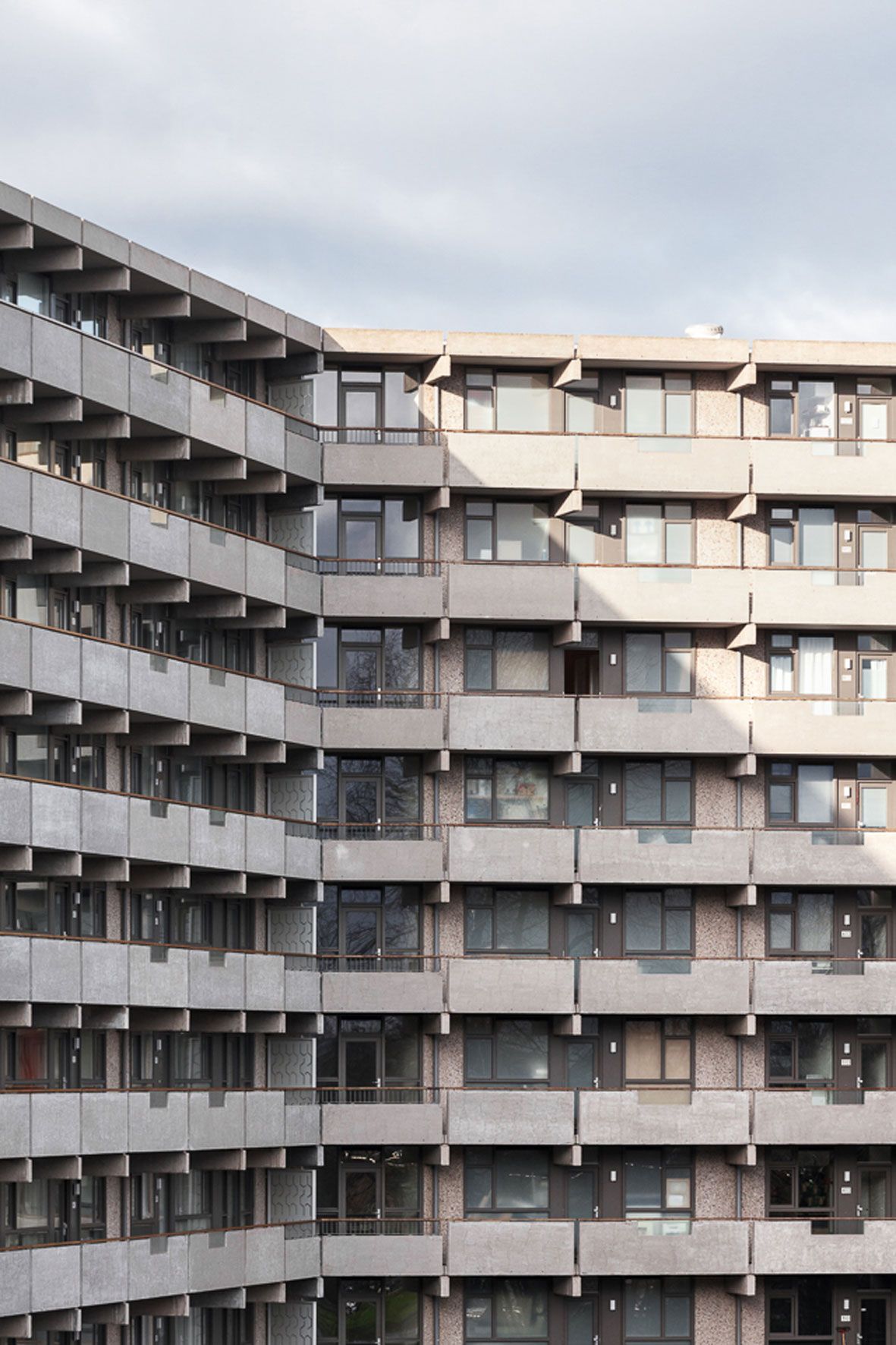 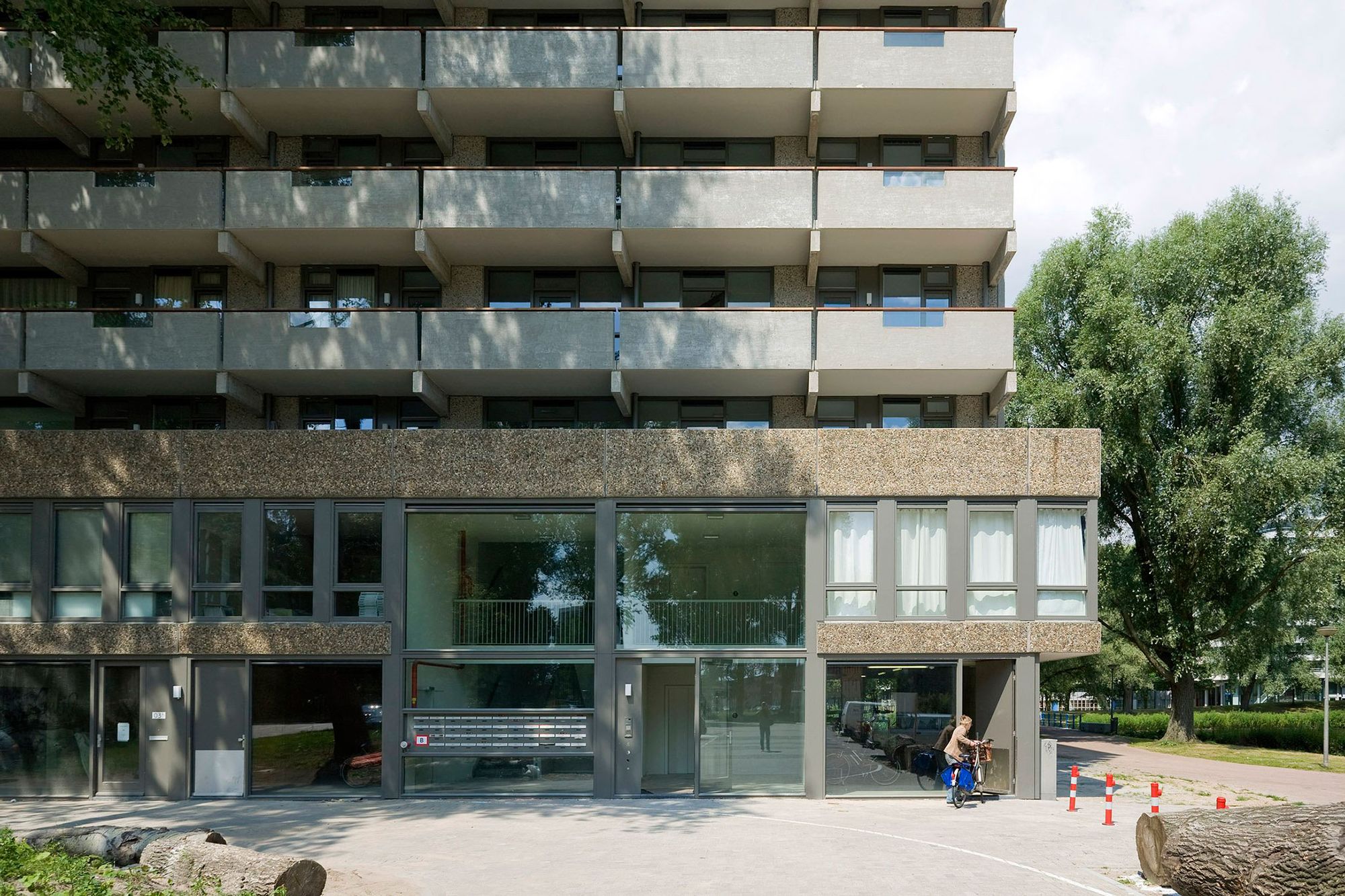 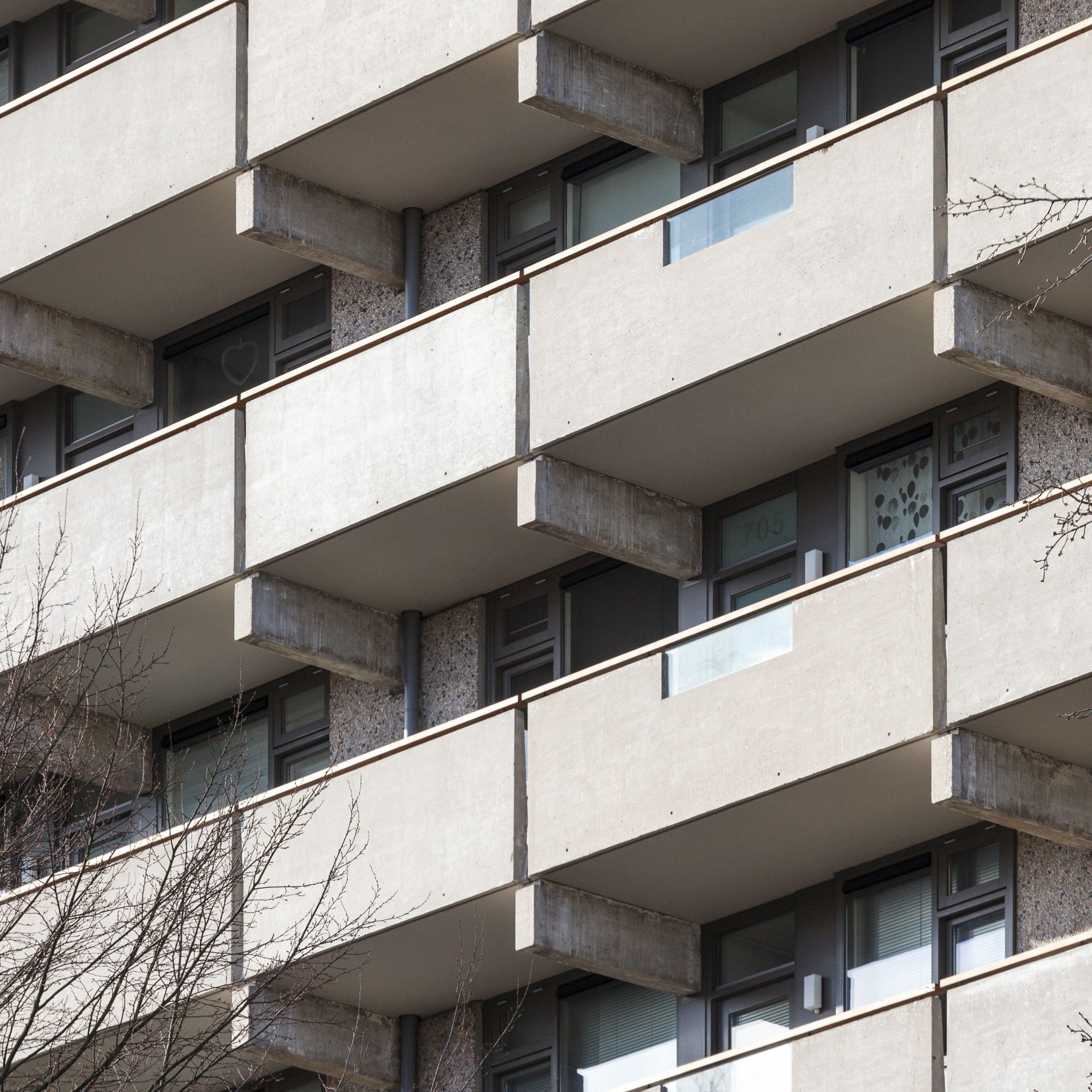 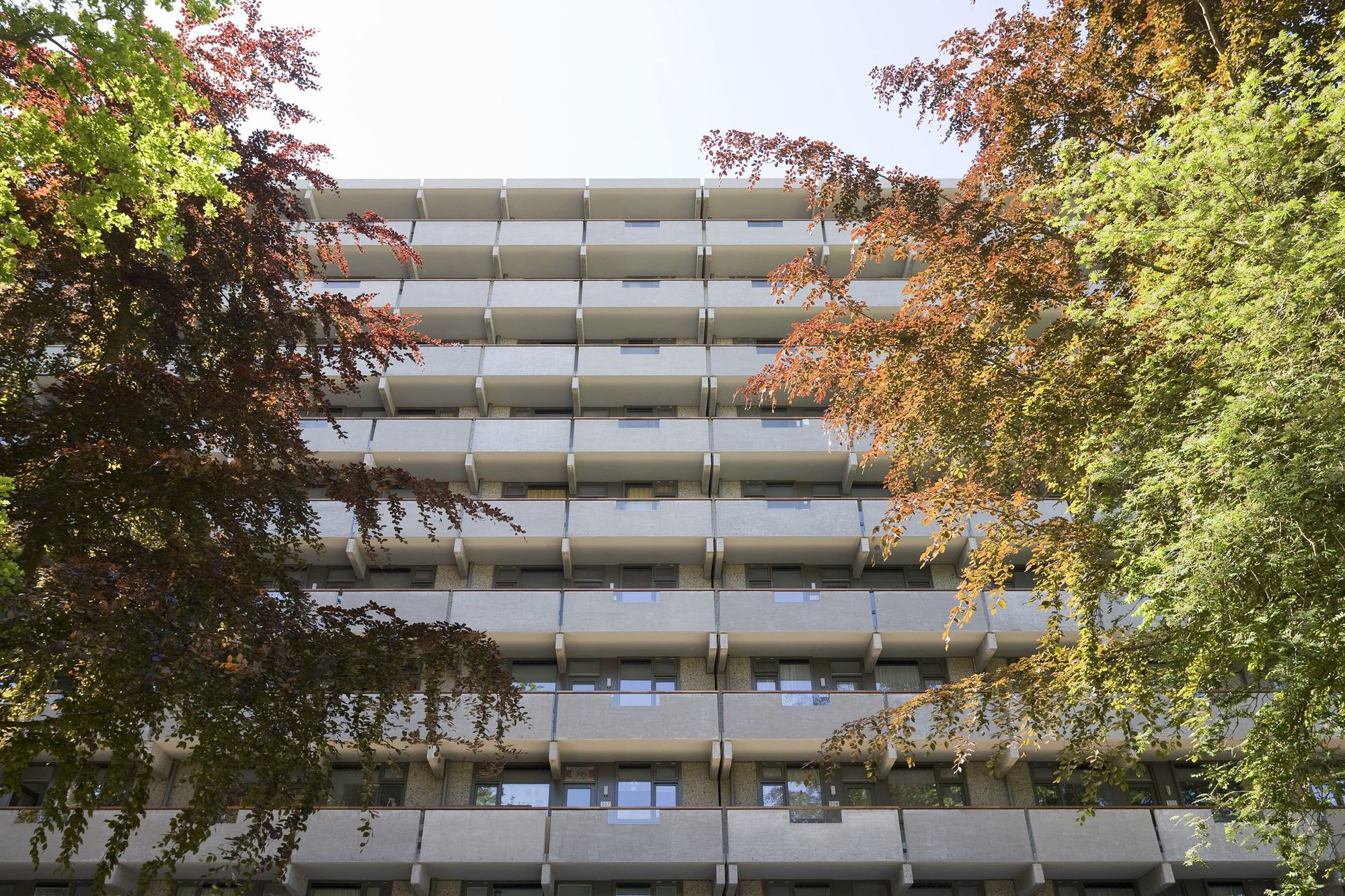 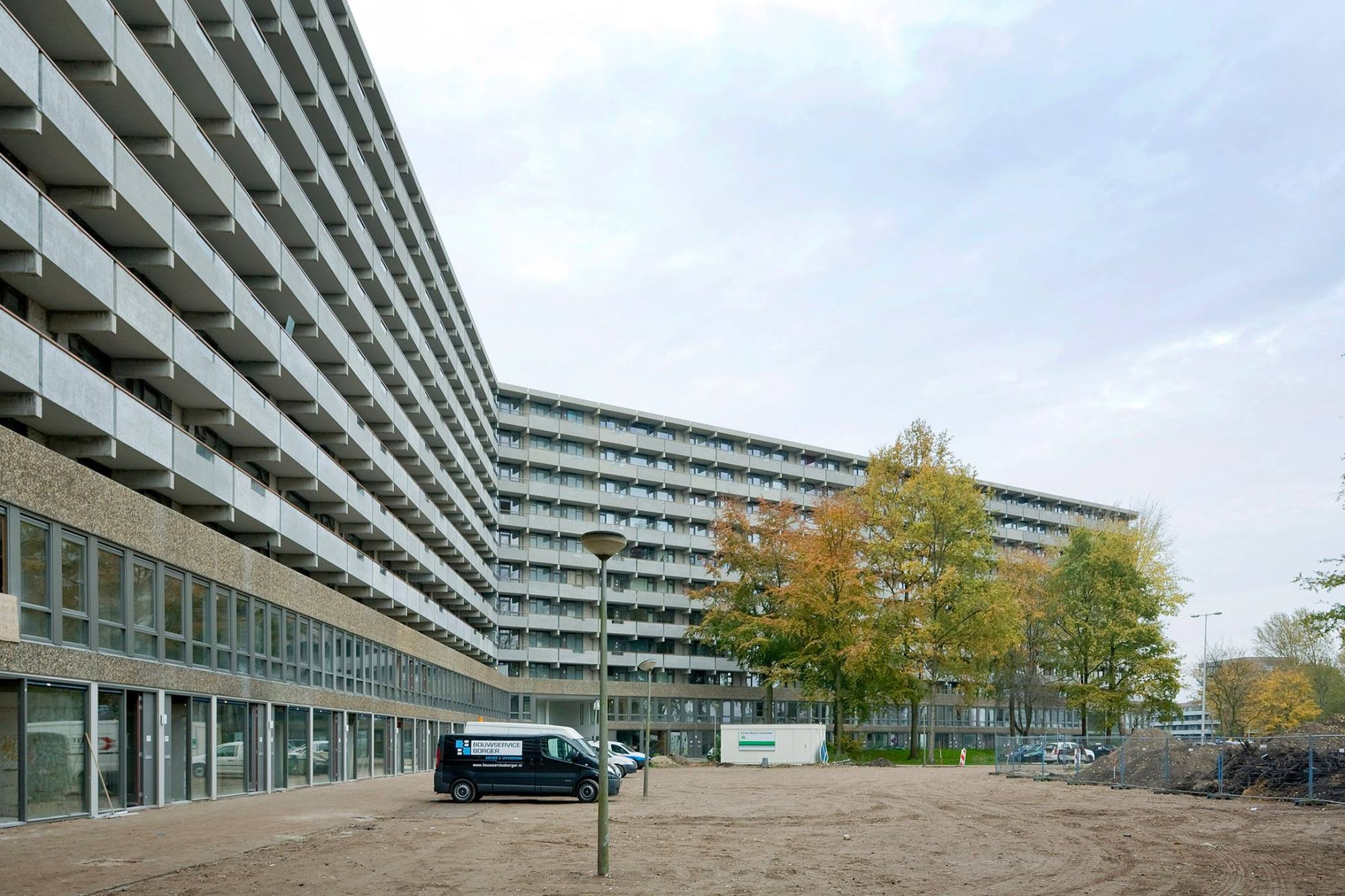 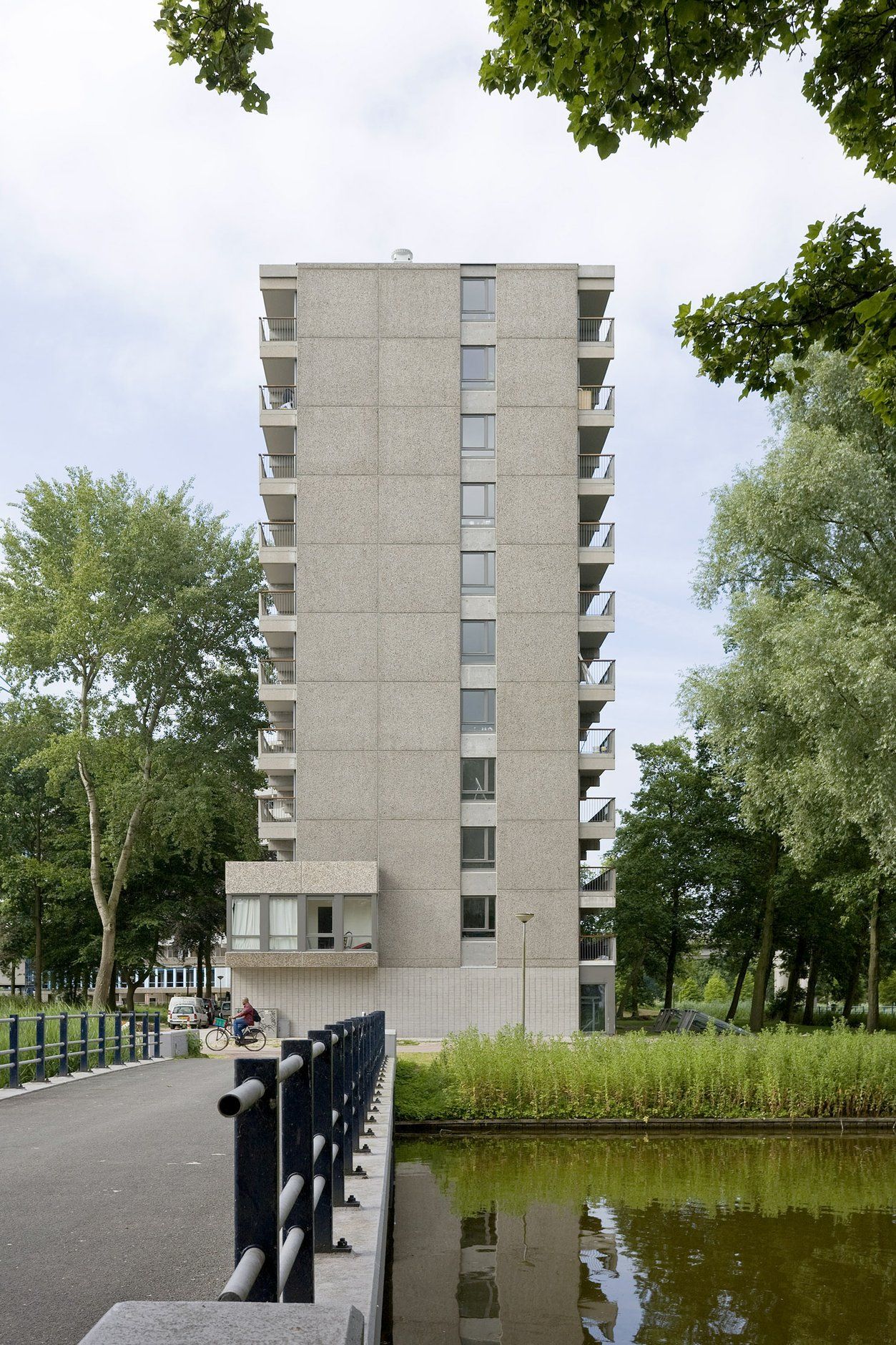 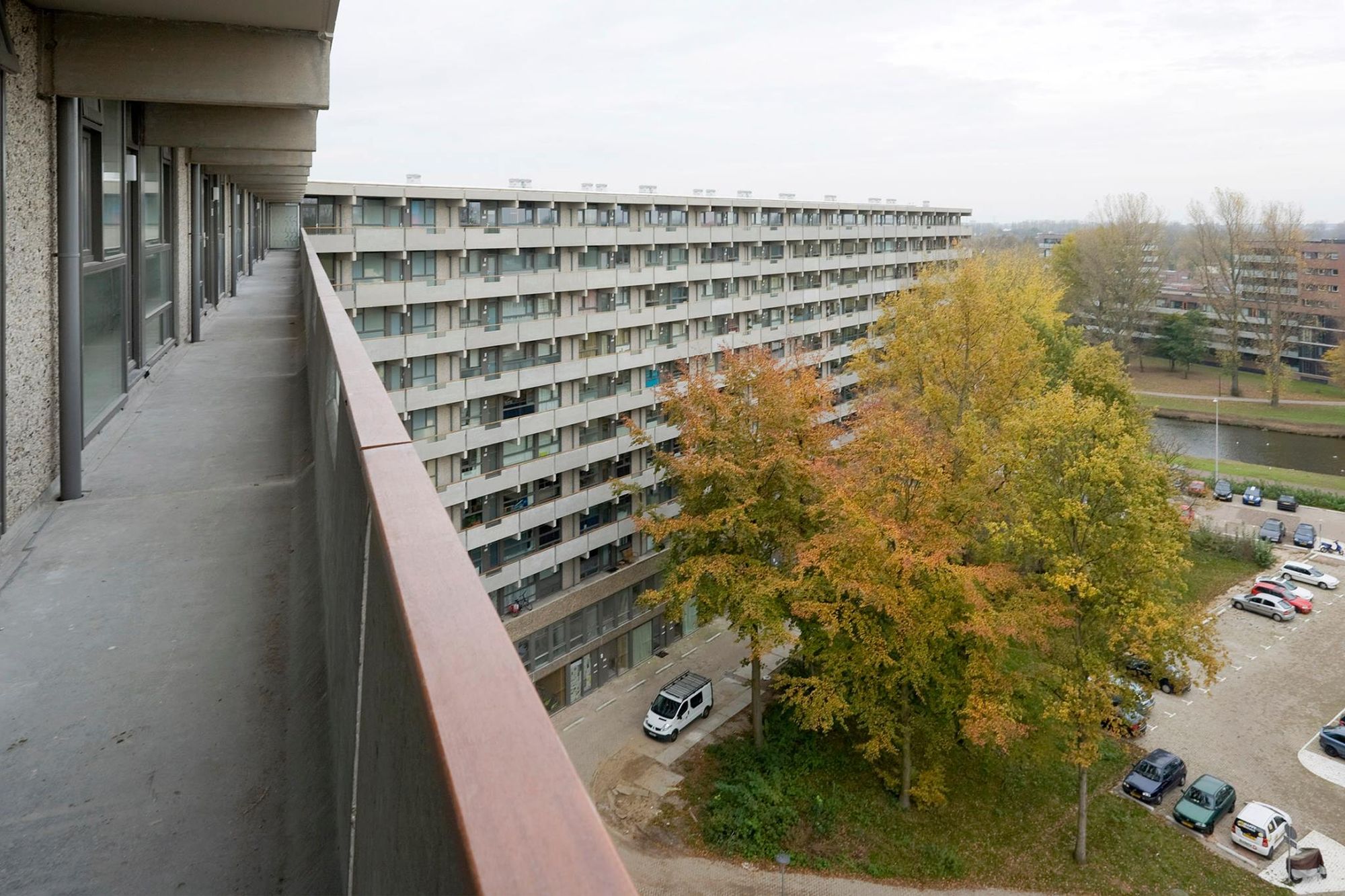 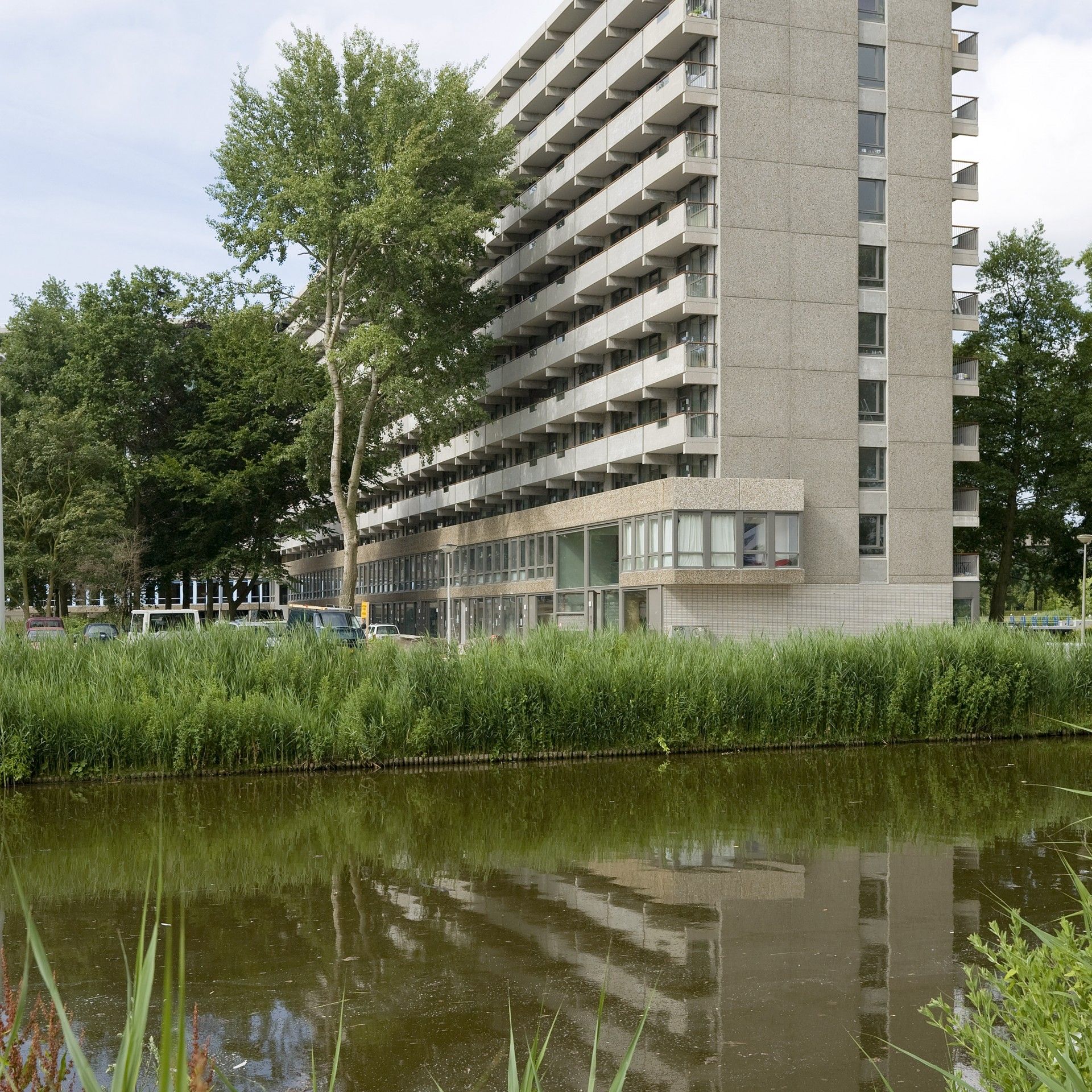 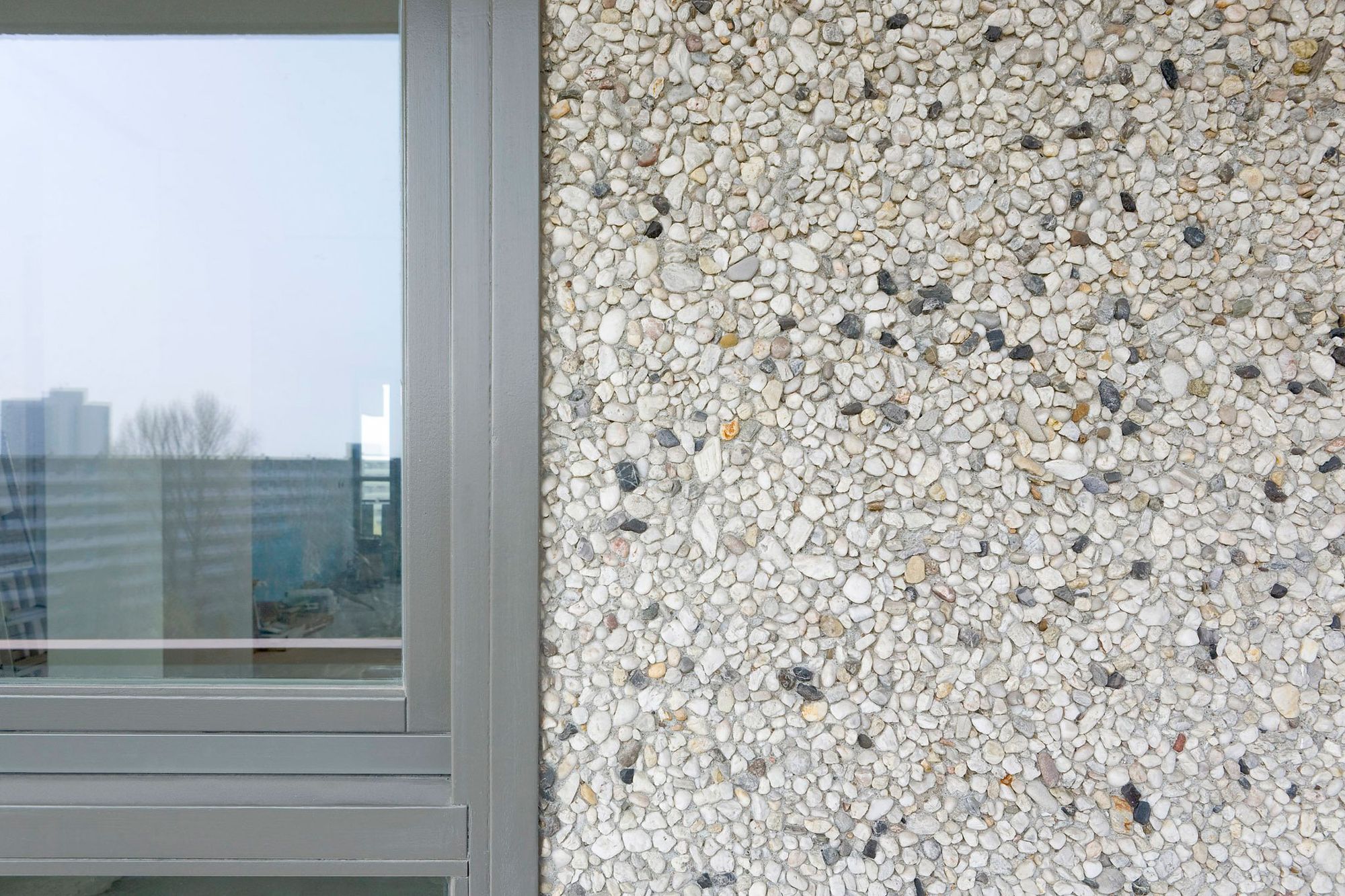 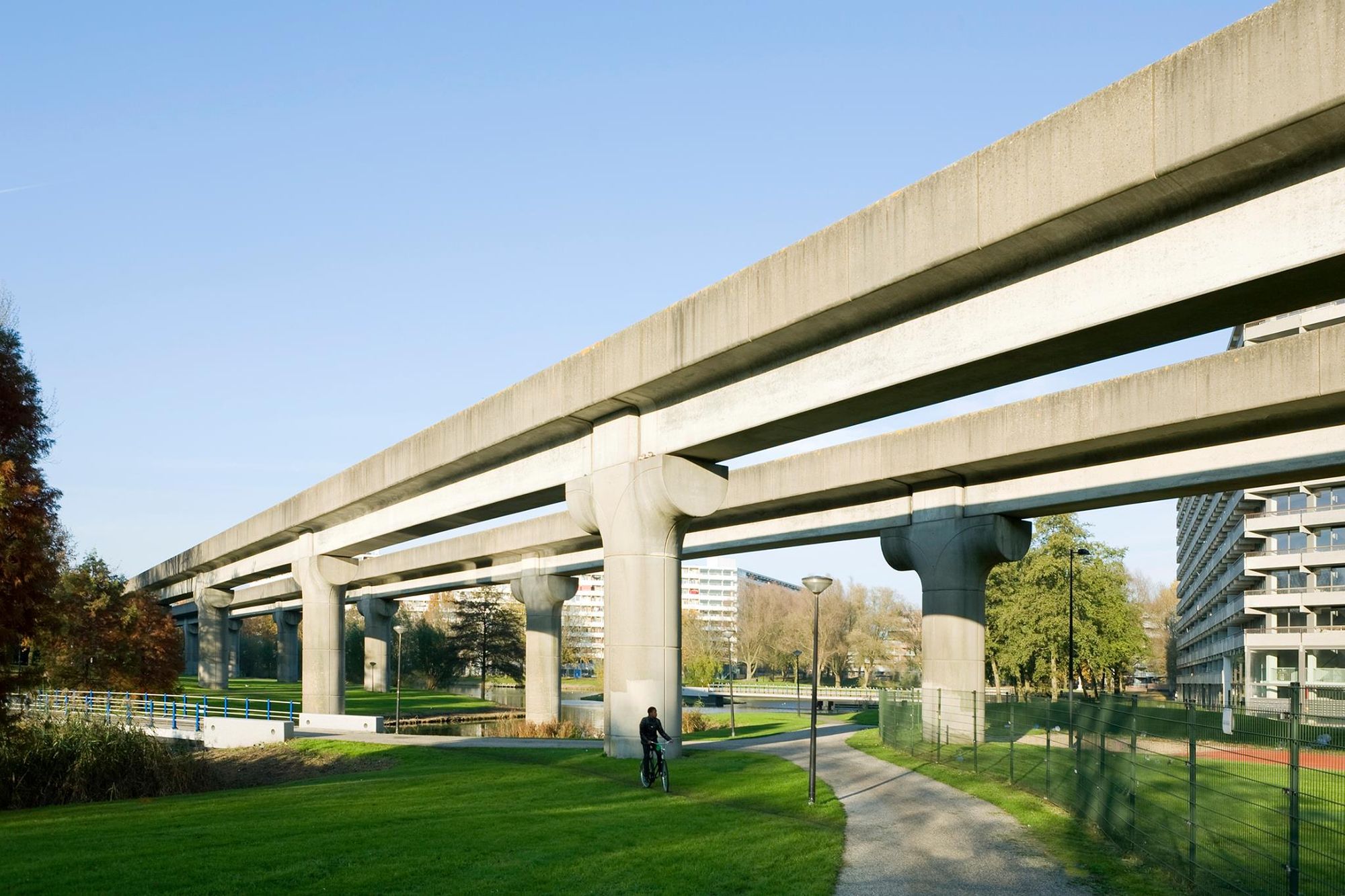 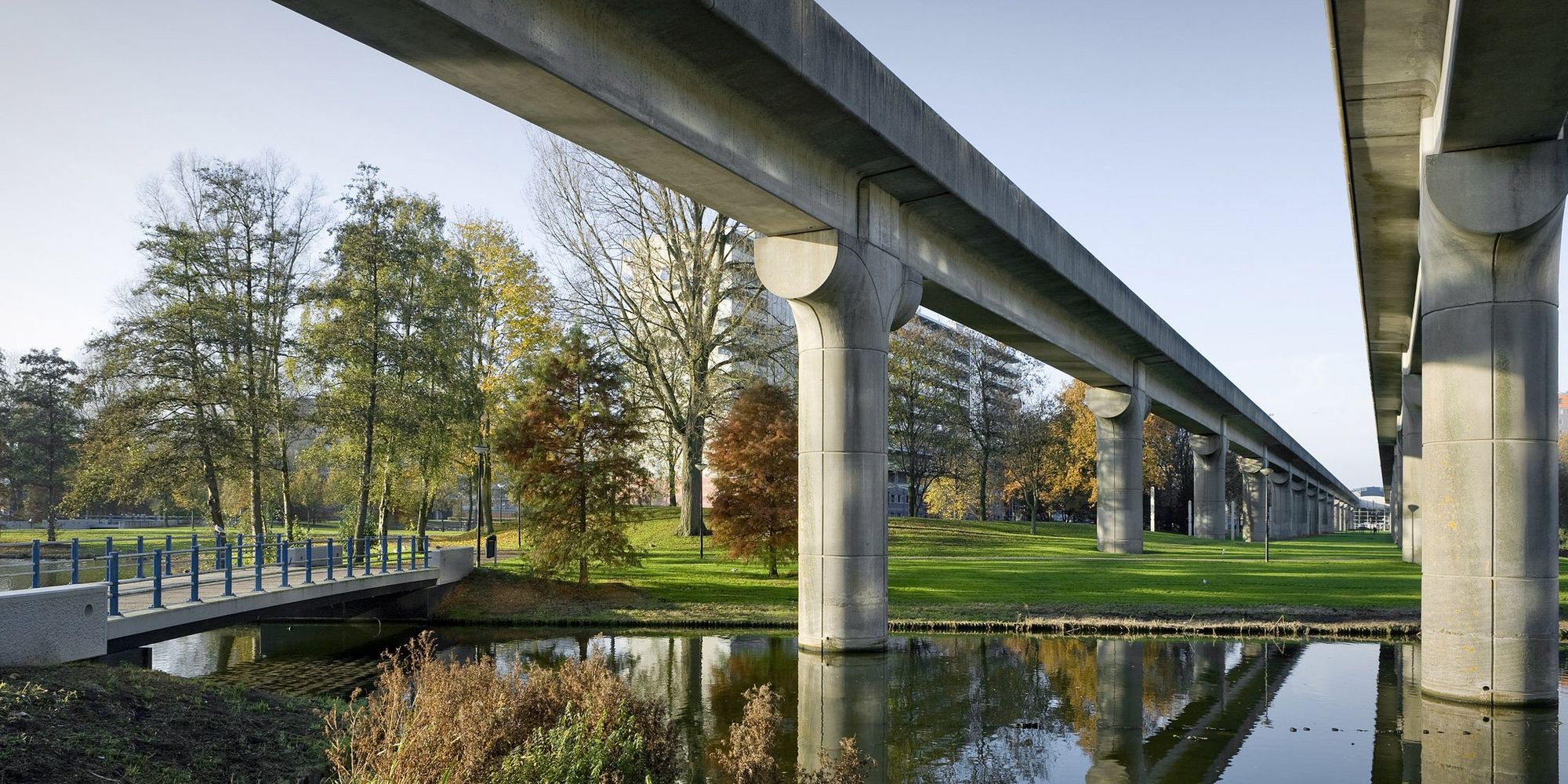 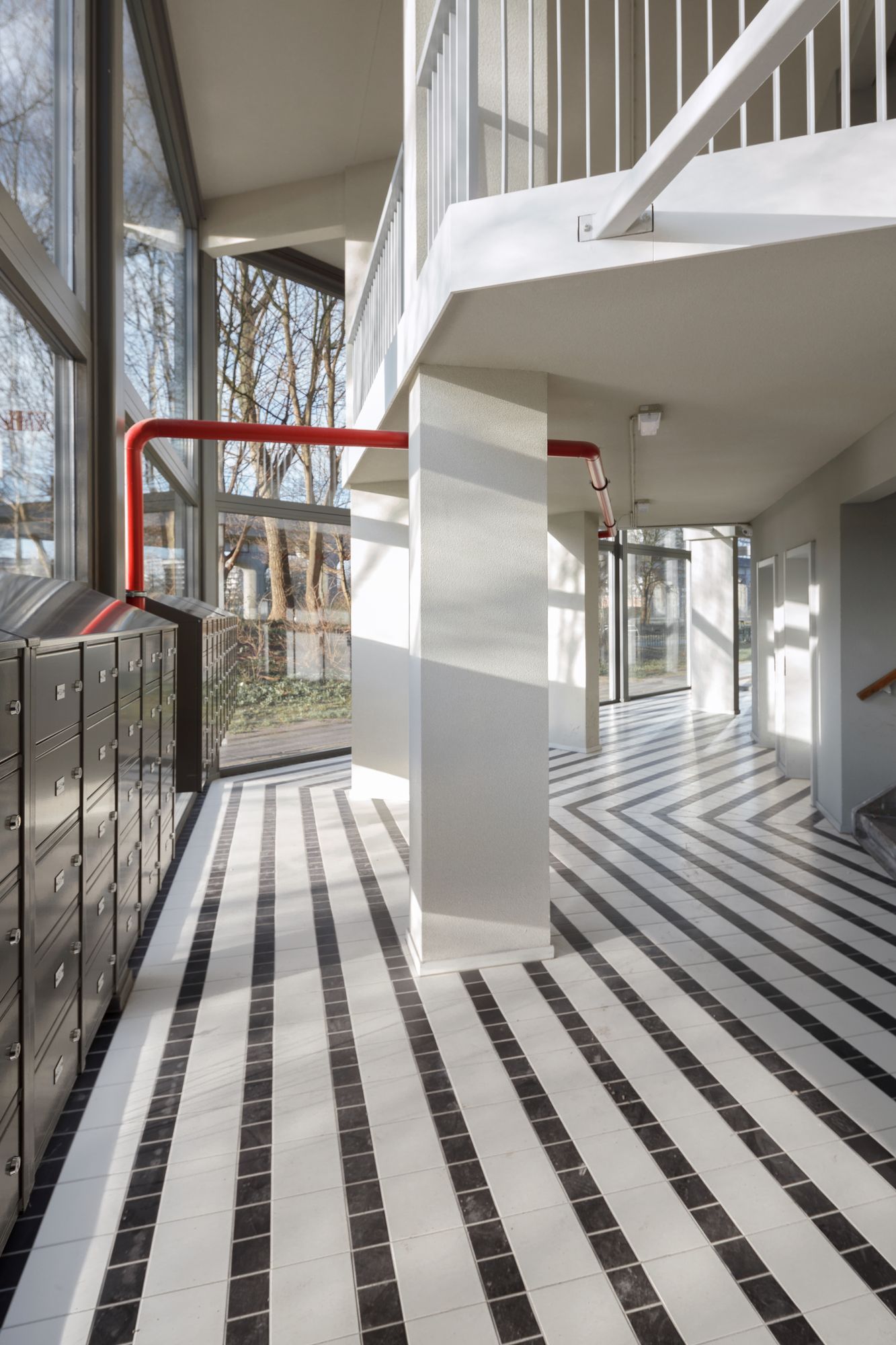 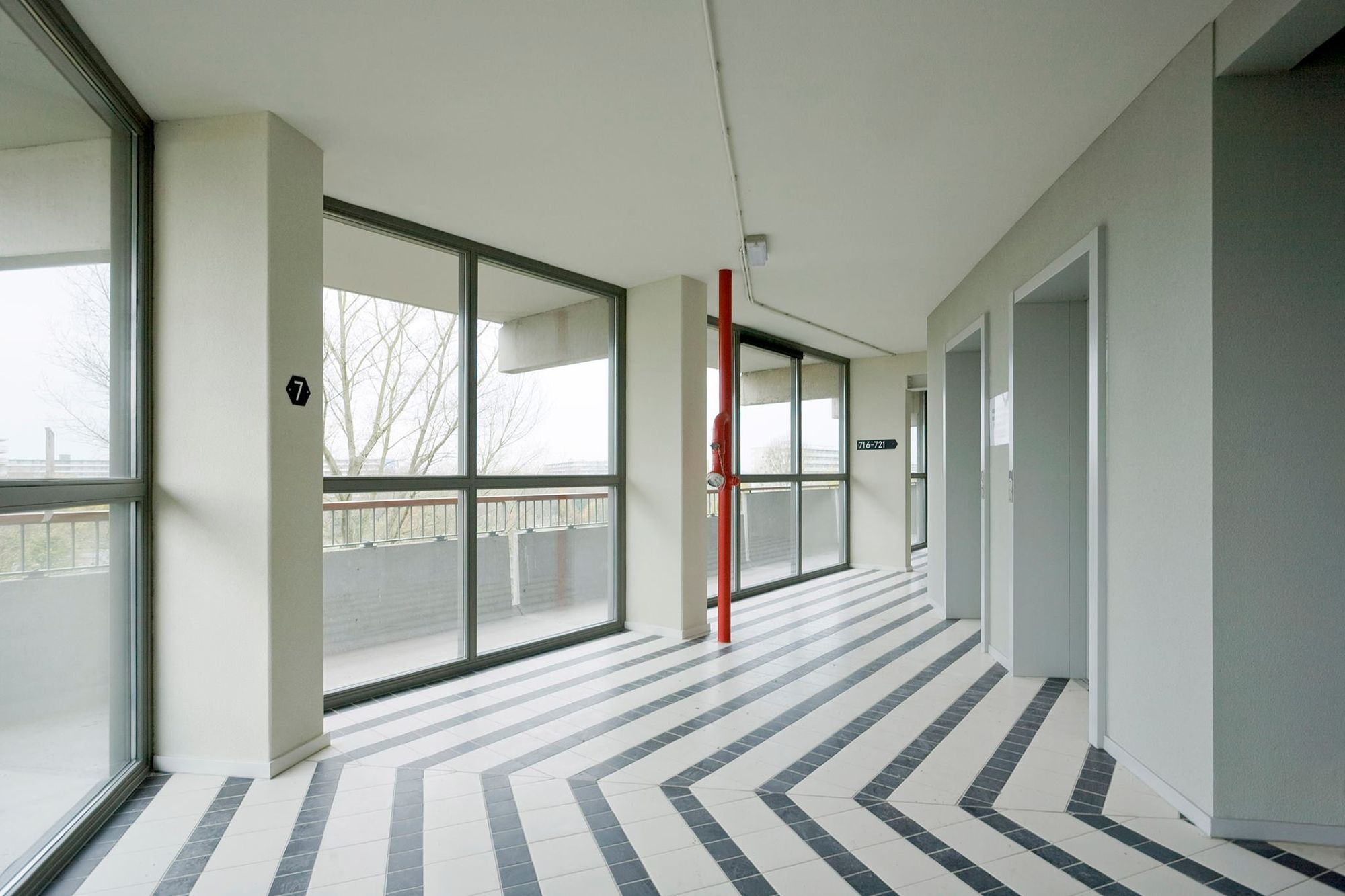 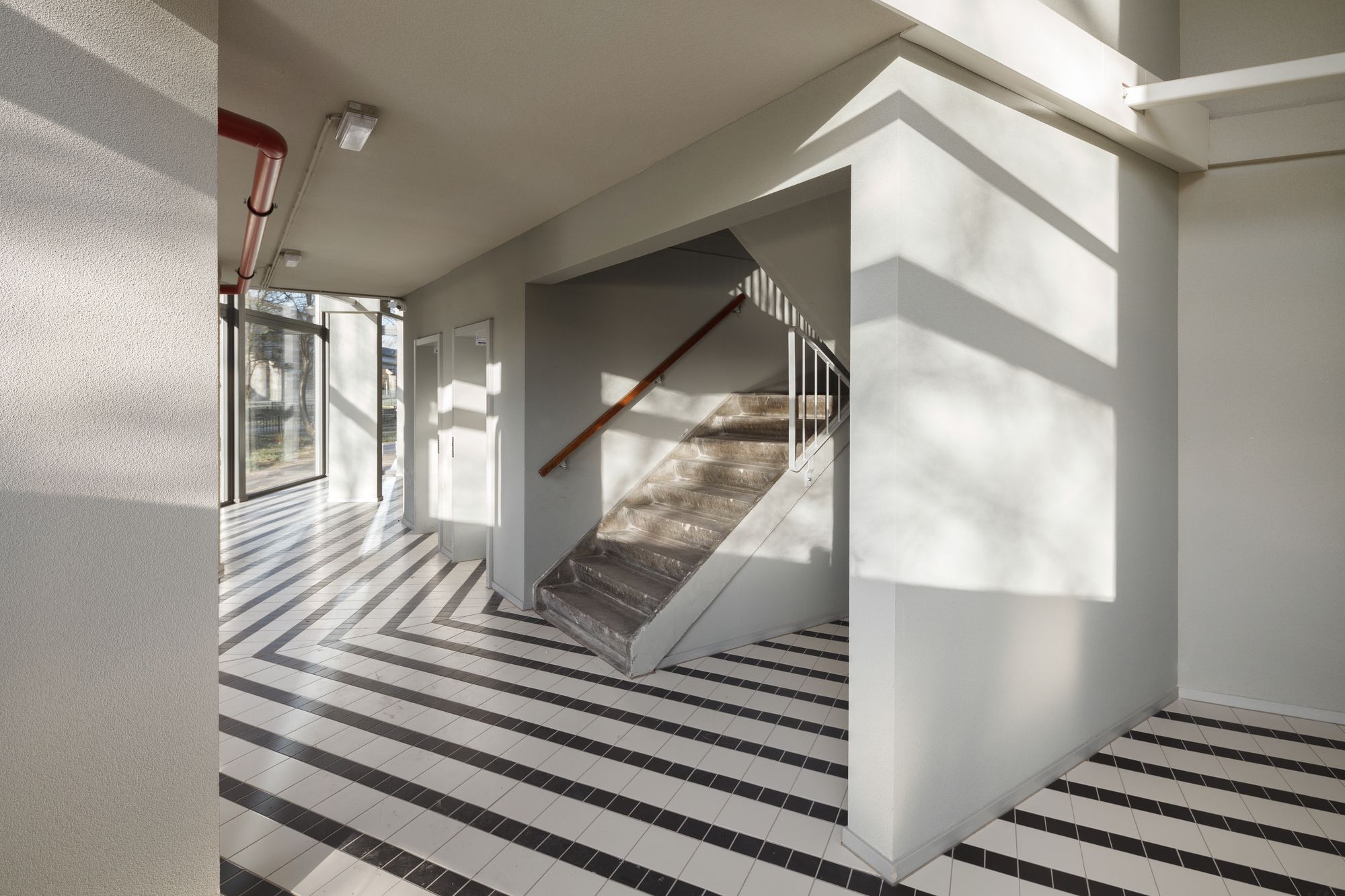 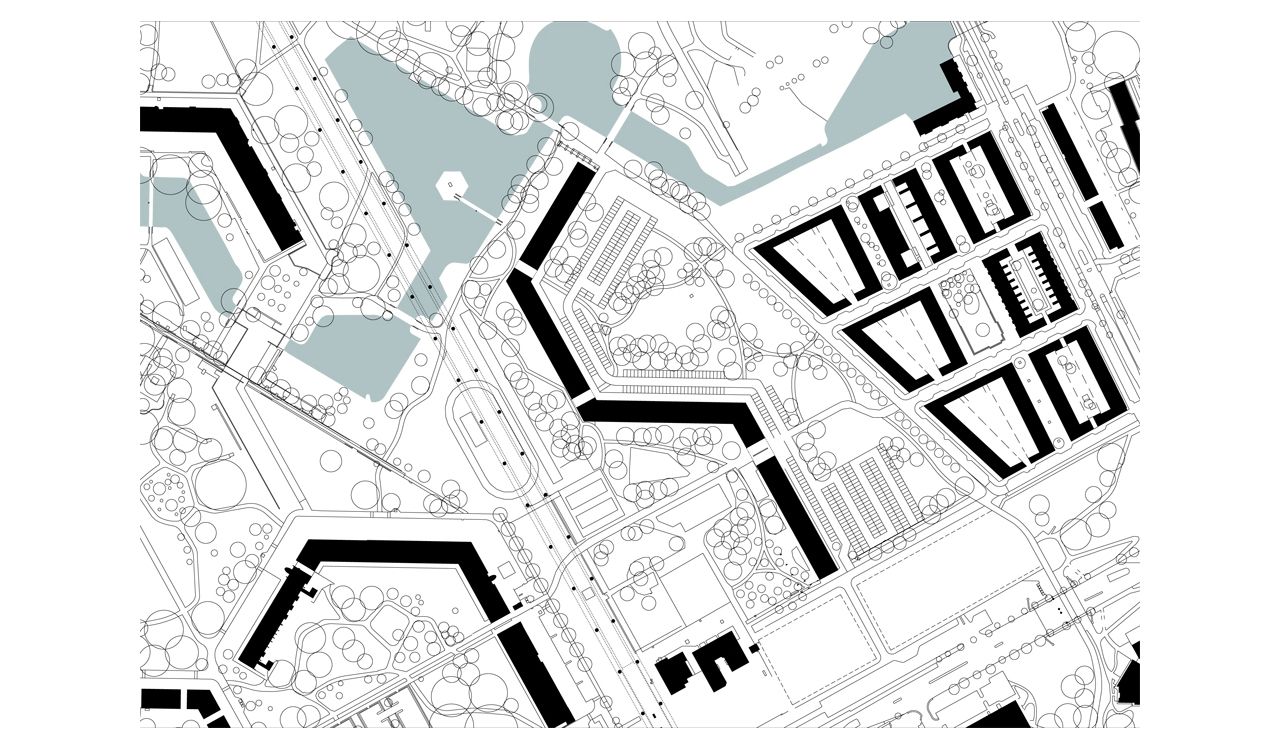 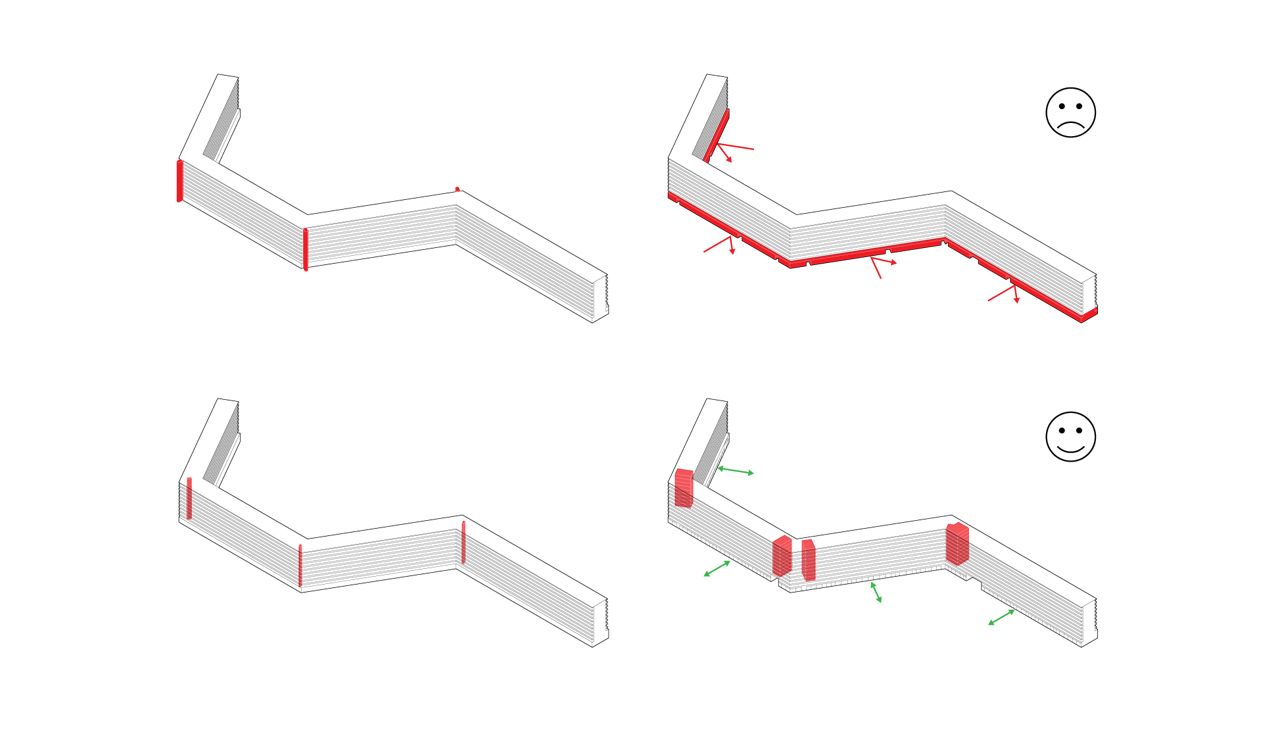 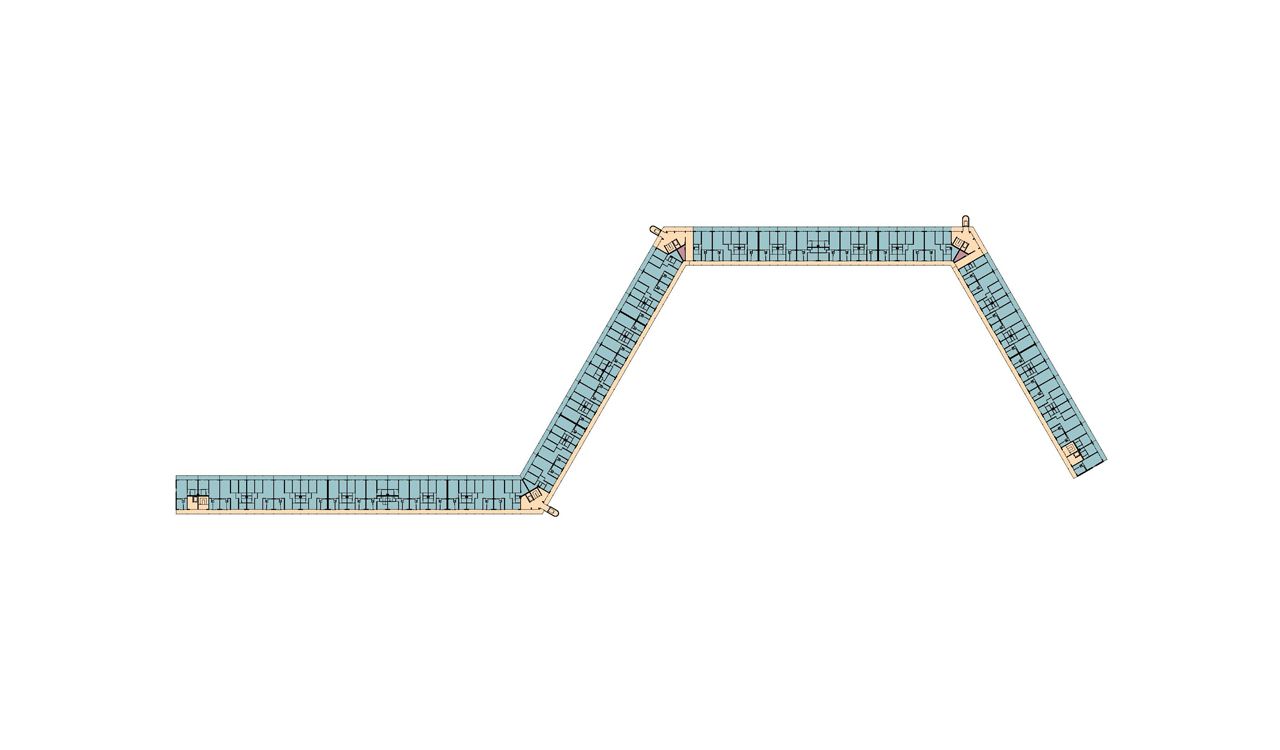 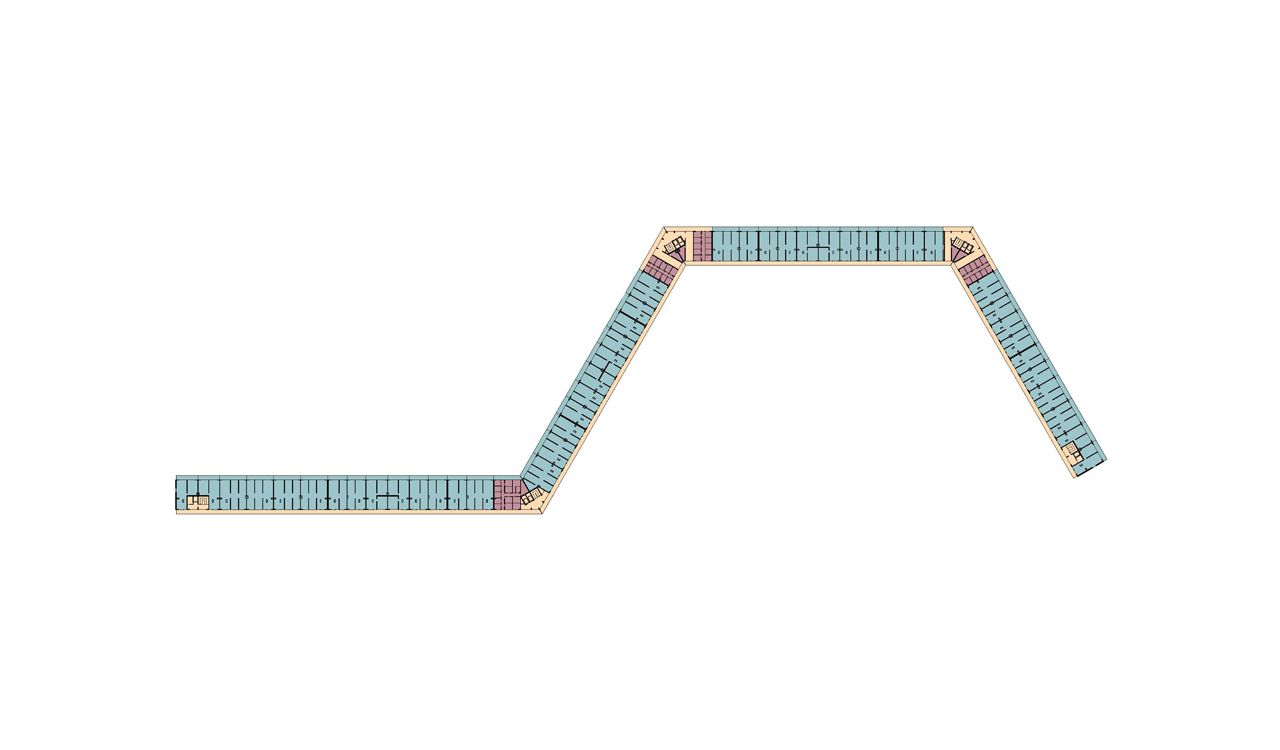 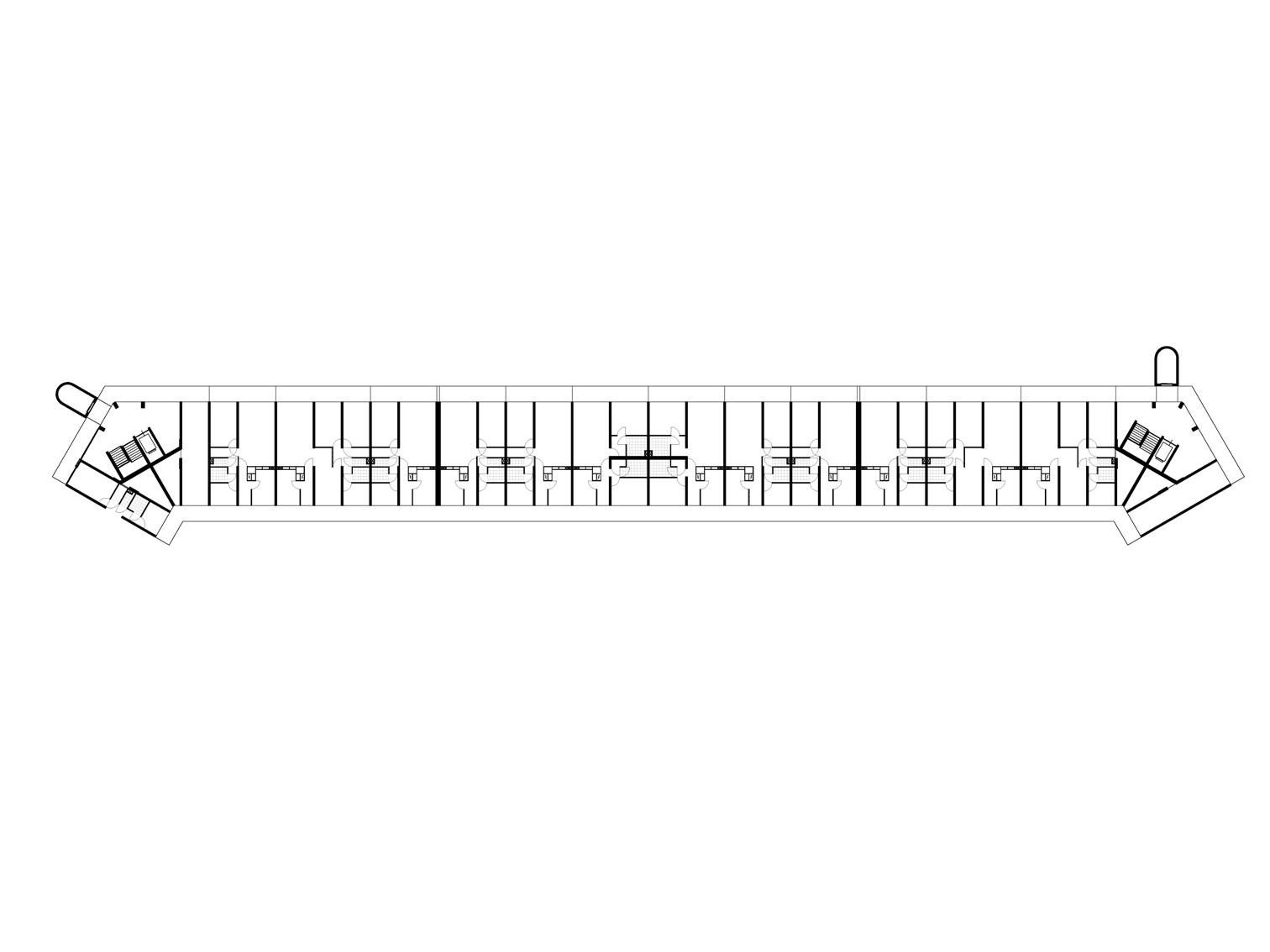 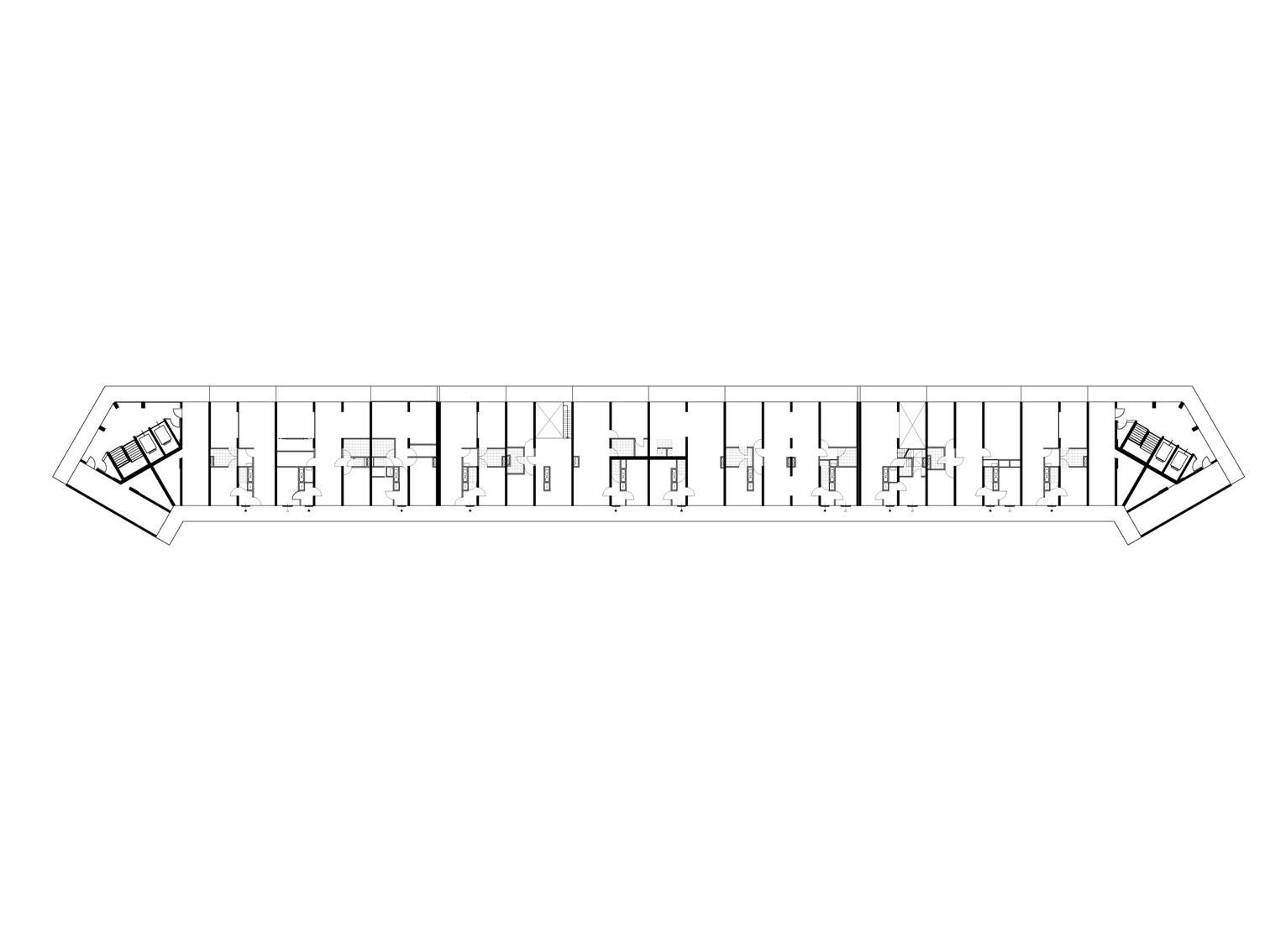 The renovation of the Kleiburg apartment block in Amsterdam by NL Architects illustrates how the ‘actions’ of an existing building and people can be an important source for the architecture. In this project the existing, 1960s honeycomb apartment block in the notorious Bijlmer district, was the starting point. It is a tribute to NL Architects’ insight that instead of staking everything on cosmetic interventions, they allowed the material, formal and typological energy of the building to speak once more. The building was not tackled according to the canonical formulas of adding terraces, redefining the elevations by way of a new cladding, or transforming the typology of the apartments. Instead, the architects opted for a completely different approach in which the potential inherent in the rationality of the modern artefact of the Kleiburg building was pivotal.

NL Architects recognized that the rational structure of the Kleiburg embodied a huge potential energy, which could be unlocked in a new way and thus activated. To maximize the expression of that energy, the architects returned to the fundamentals of the building. Its materiality was restored, the communal areas were returned to their original form and supplemented with large communal lobbies. The structure of the building was laid bare, after which the apartments were offered to future residents as bare shells.

In contrast to other buildings by NL Architects, the focus here was not on devising an impressive form, but rather on preparing a basic form for other actors. The role of the architectural project is reduced here to the definition of impulses, which have little value as such, but acquire their significance in the interplay with a future action in the built environment. The project articulates a recognizable basis in which other architects, developers and residents can subsequently intervene. The architectural project is thus redefined as anticipating, and accommodating, the multiple actions of all these actors in the built environment. The architect’s contribution lies in recognizing the power of this communal action and anticipating it using architectural means.