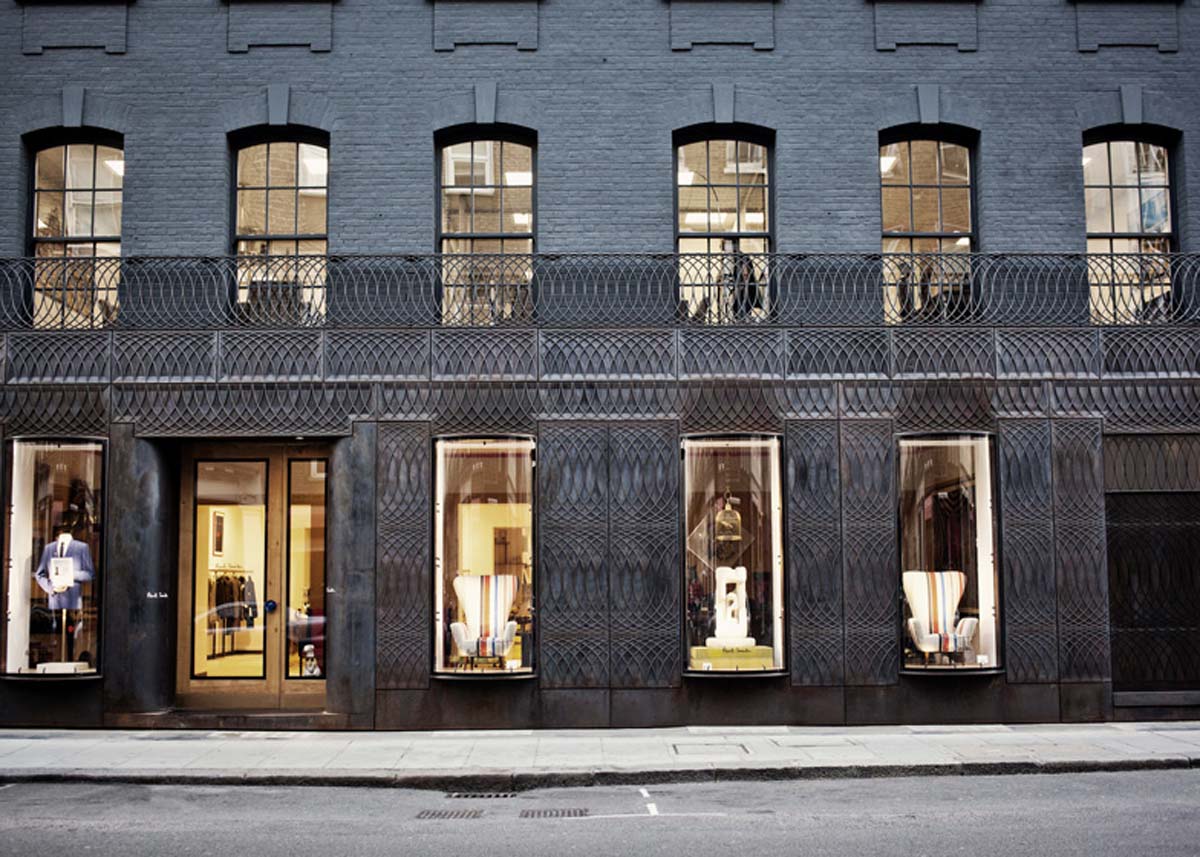 6a Architects abstracted Paul Smith’s hand drawings to create a repetitive relief pattern of interlocking circles to cast in iron, a common material around the British capital.

«Cast iron forms an understated background to the city’s streets; its railings, gratings, balconies, and lamp posts,» said the architects.

Thin edges of the circles are embossed to cast shadows across the surface, which is patinated and marked from the casting process.
The facade covers an existing eighteenth century shop front, and its colour and style provides a sharp contrast to the other Georgian buildings in the Mayfair area of London.
Three small drawings by Smith have been cast directly into sections across the facade. Curved glass cabinets protrude through the ironwork to display items of furniture.
At the entrance to the shop, the panels curve inward to the large stained oak doors.
Inside, the store features brightly coloured accents to match the designer’s furniture and an accessories room lined with dominoes – see our earlier story about the interior here.
6a Architects has previously completed the renovation of a contemporary art exhibition centre in east London and stripped back a derelict house to expose original structural features.

The ground floor rustication of the Georgian townhouse and the ornamental language of the 18th century shop front were reinterpreted and abstracted in a sinuous pattern of interlocking circles cast into a new solid iron facade. The repetition of the typical Regency shape brought an optical complexity, which with the play of sunlight and shadow turns the pattern into a deep surface texture. Seen obliquely it seems woven, like a fine cloth.

The surface is further enlivened by the latent makers’ marks of the casting process and the natural patination of the cast iron. A more intimate discovery is to be made in the trio of small drawings by Paul cast directly into panels scattered across the façade.
Curved windows project from the darkly textured iron as luminous vitrines, with a nod to the curved glass of the nearby arcades. A secret door of stained oak lies flush with the cast iron panels: the inverted carving of the timber recalls the mould and sand bed prepared for the molten metal.

The cast iron panels curve in to the recessed oak entrance door, a gently bowed iron step evokes worn away treads. Over time, the iron threshold will polish under foot, recording the life of the building in its material. 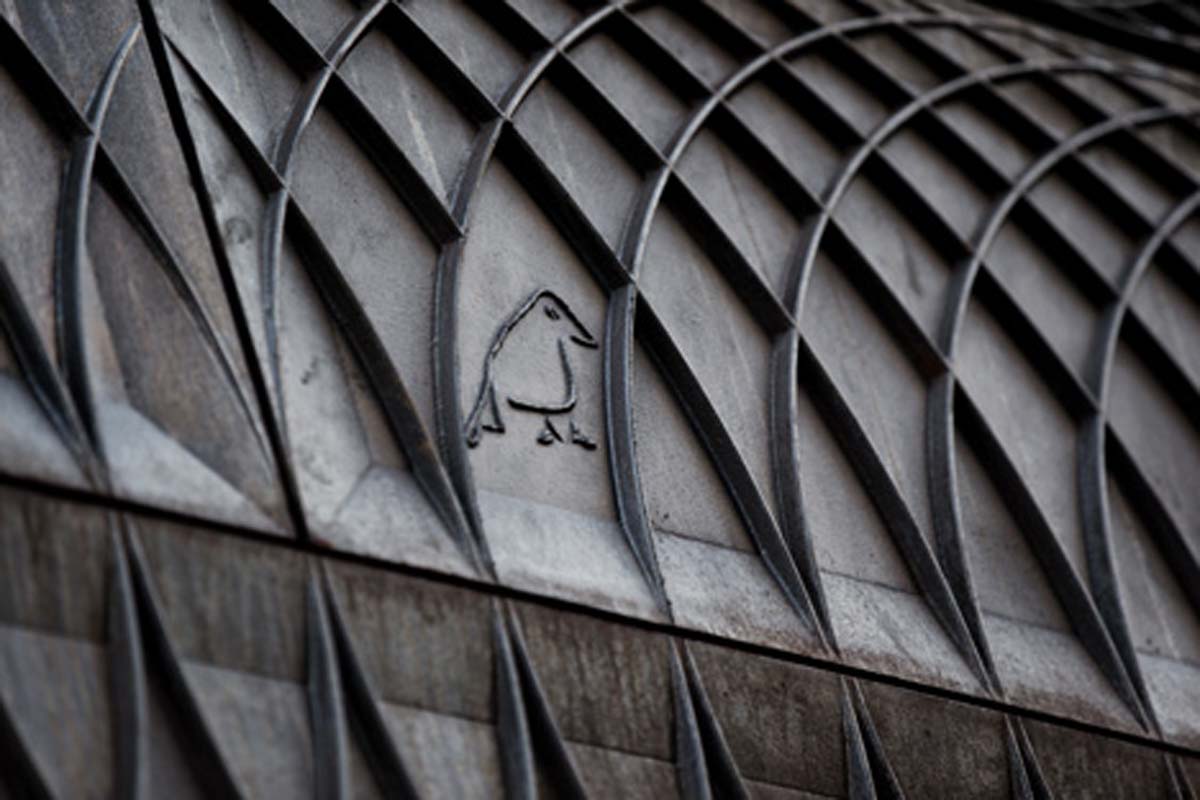 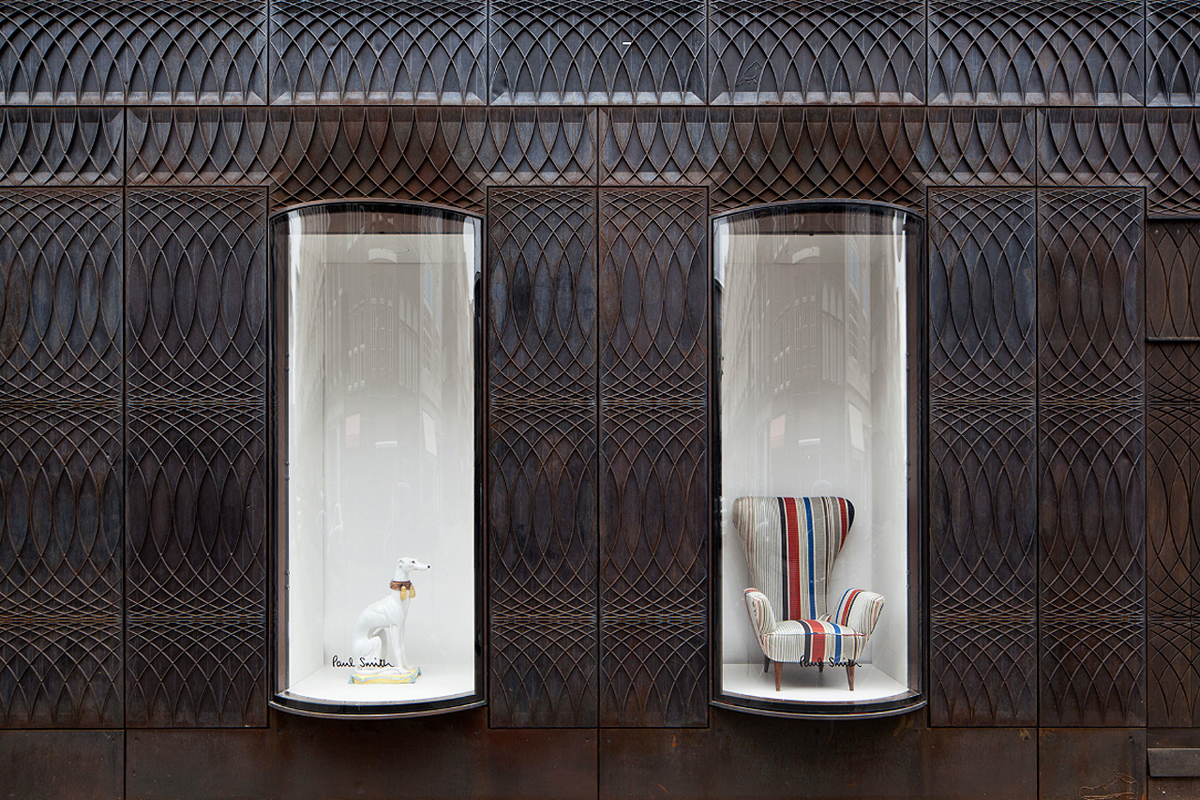 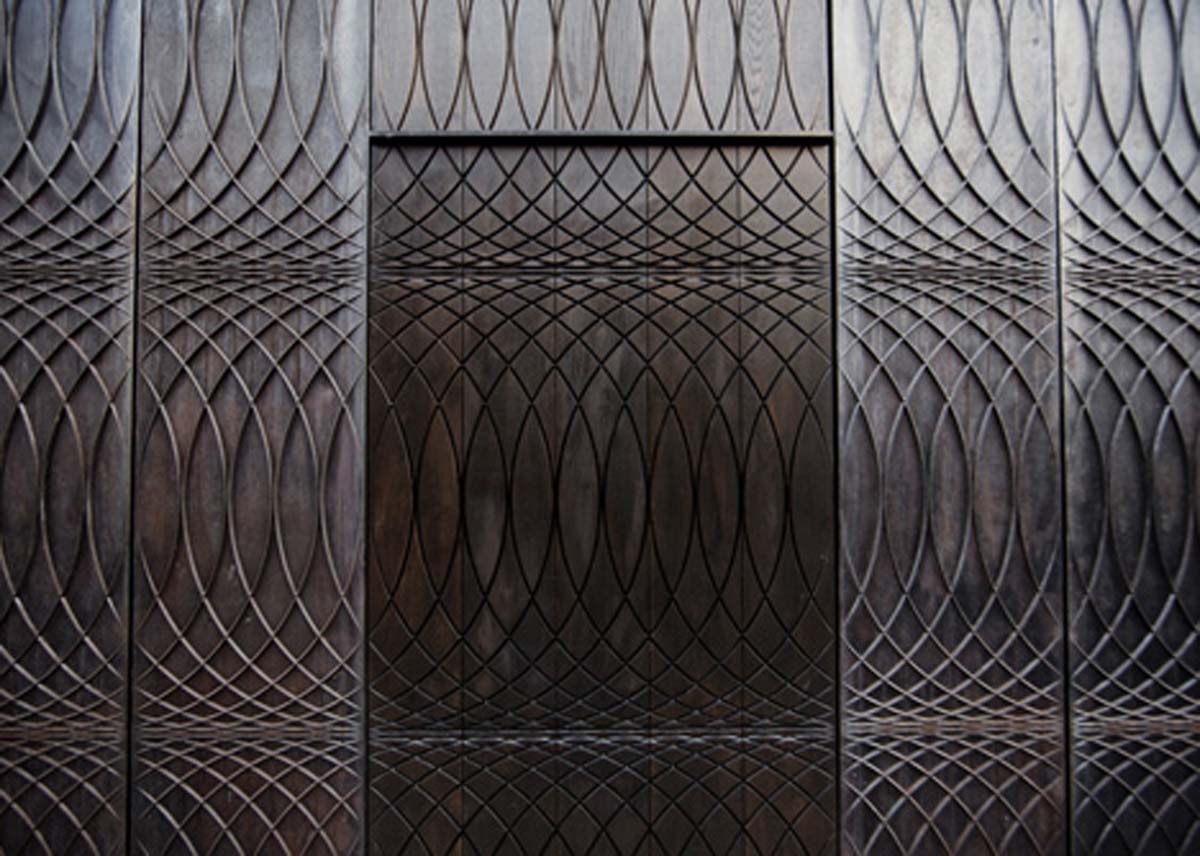 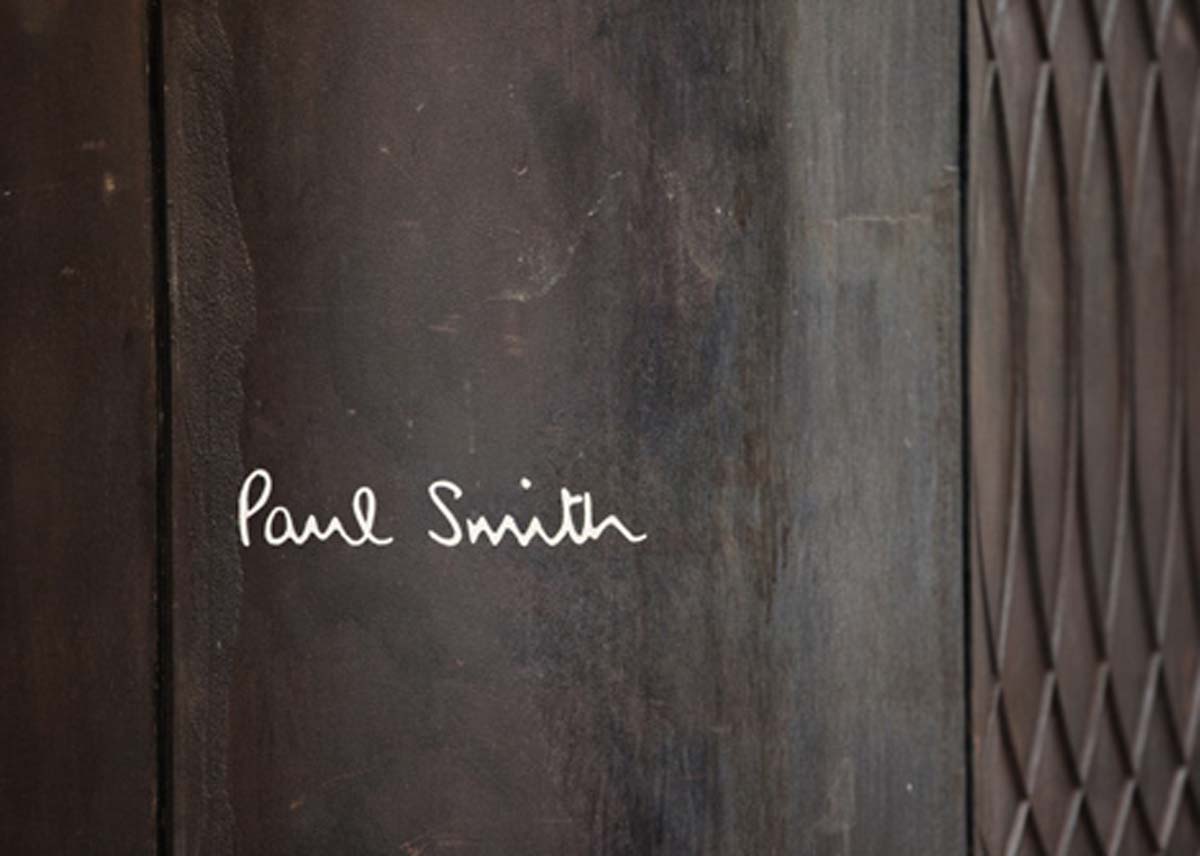 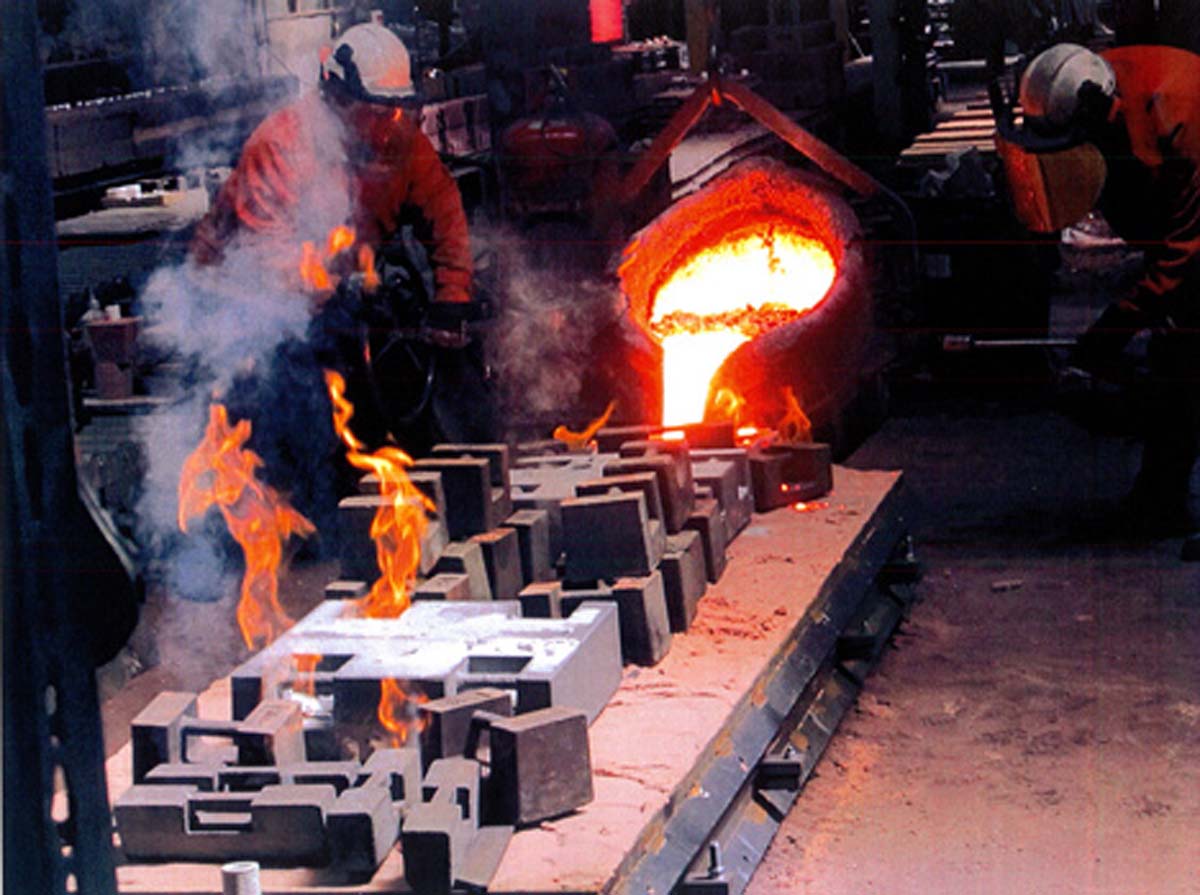 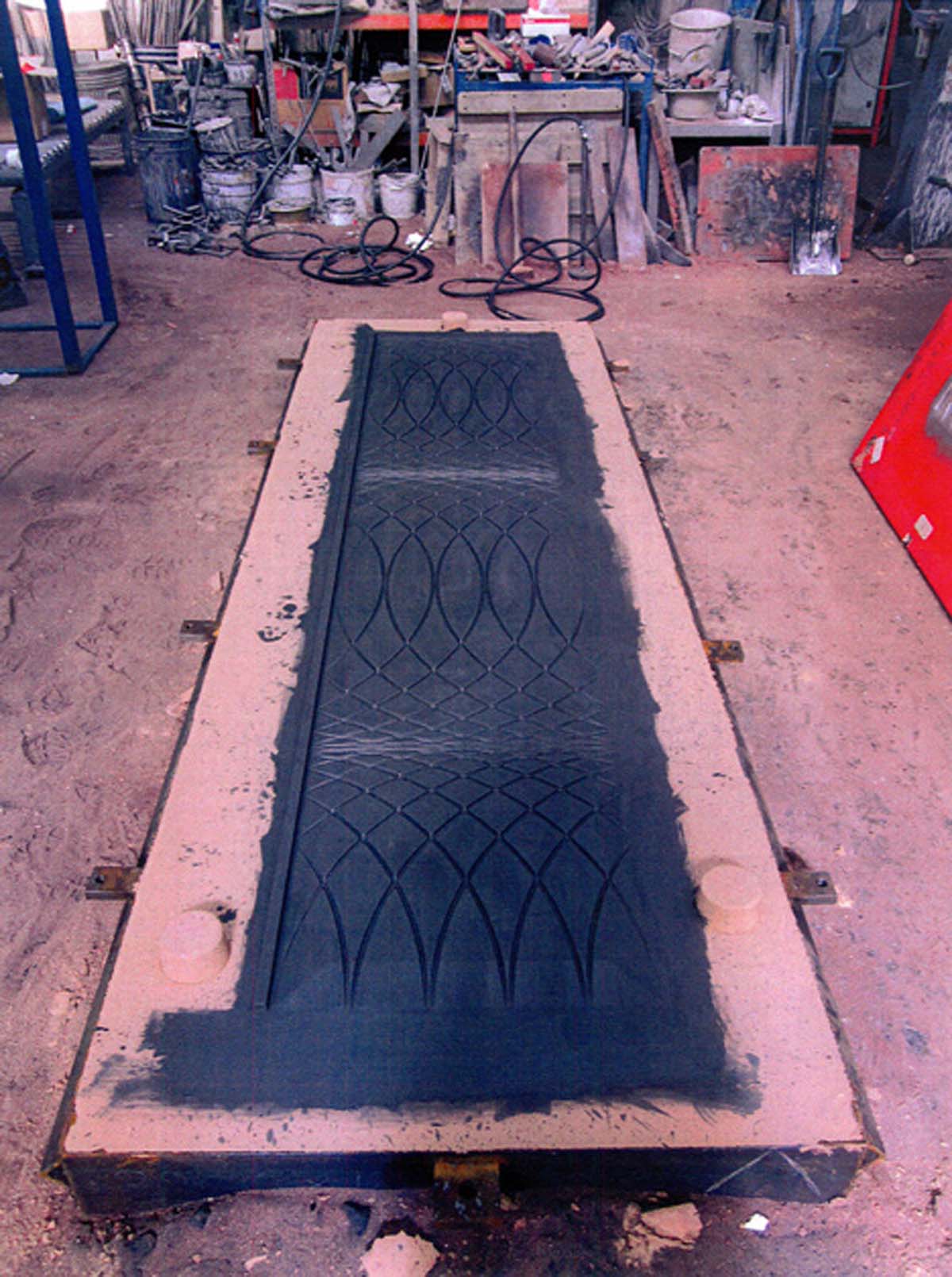 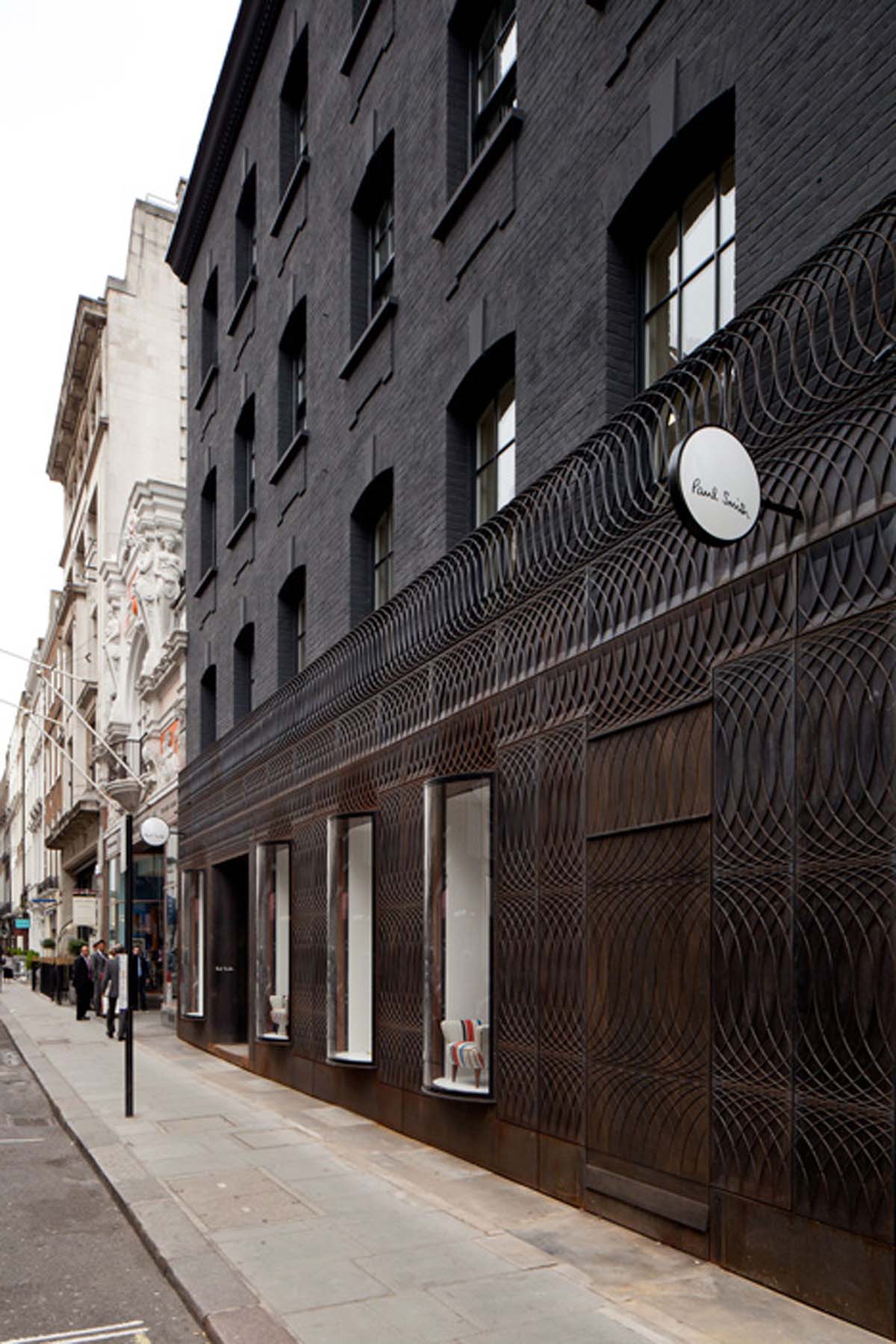 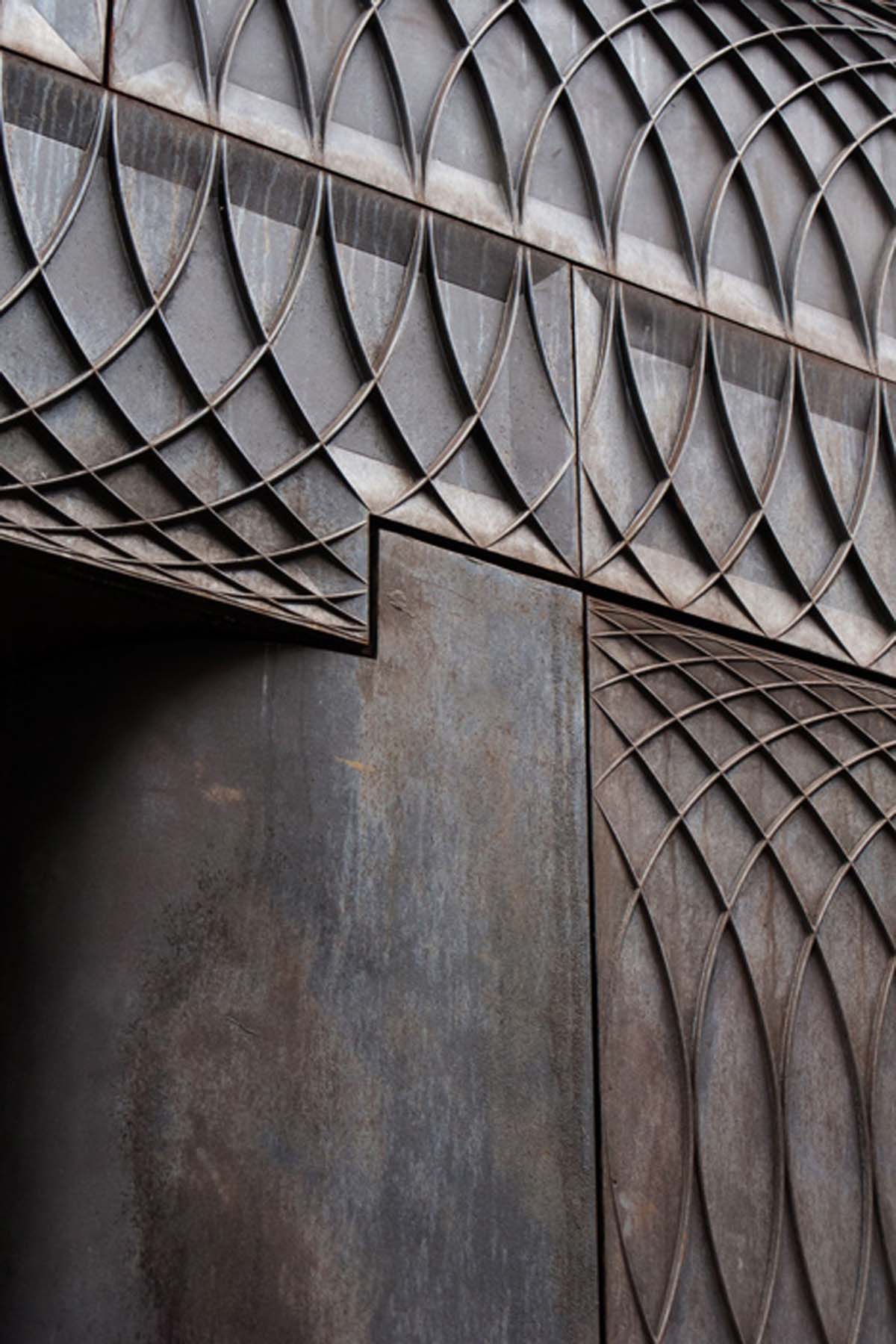 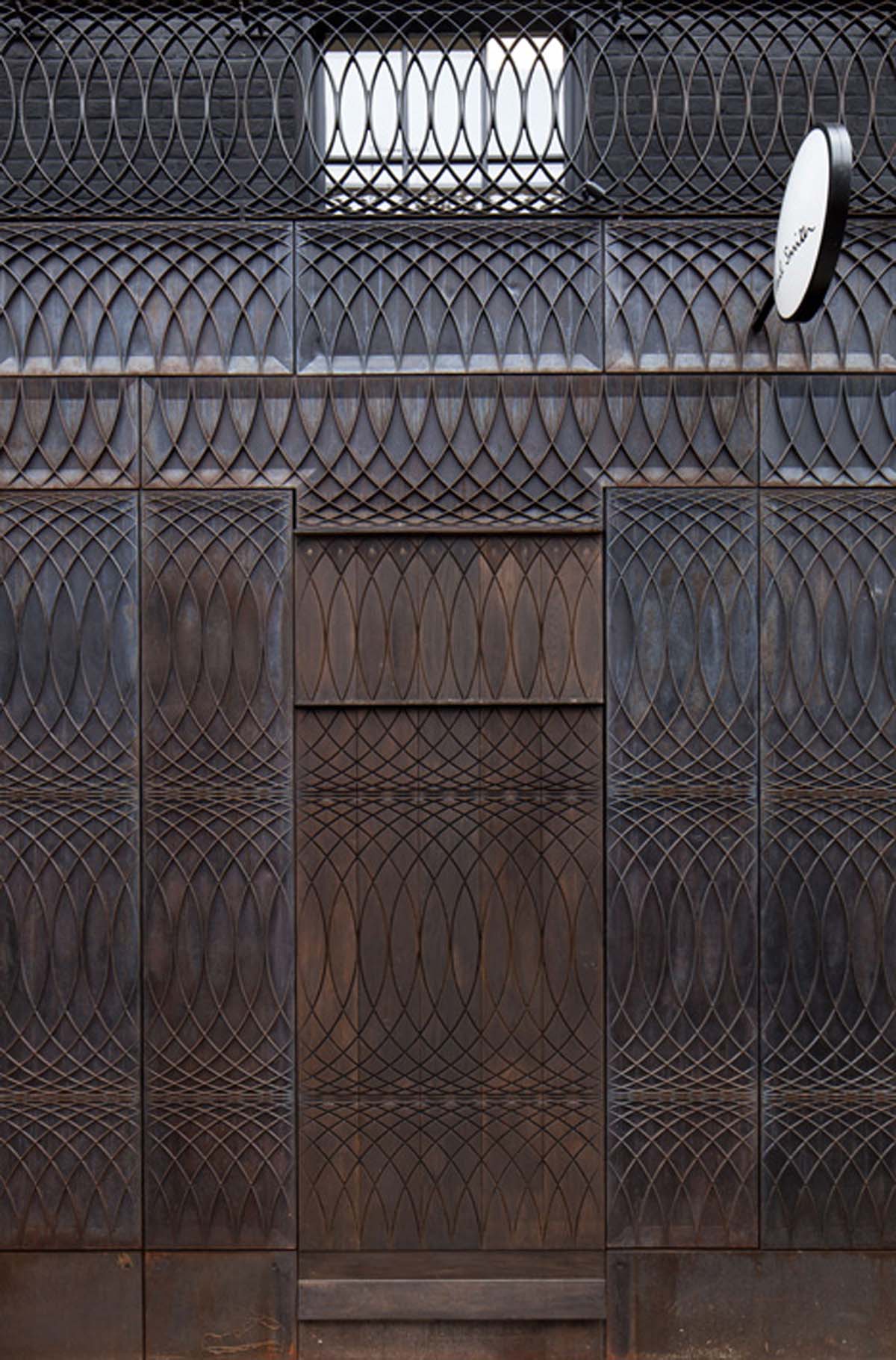 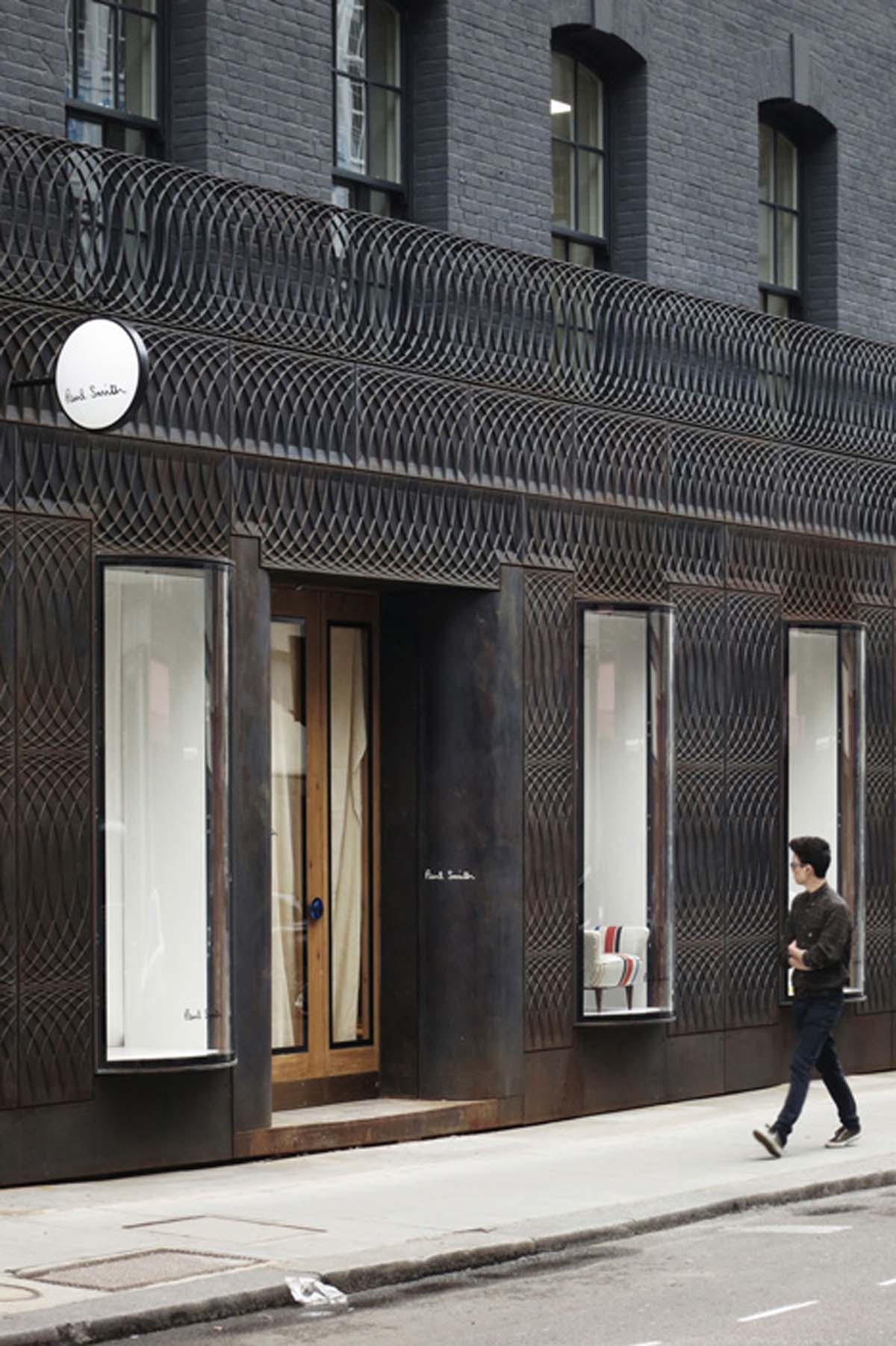