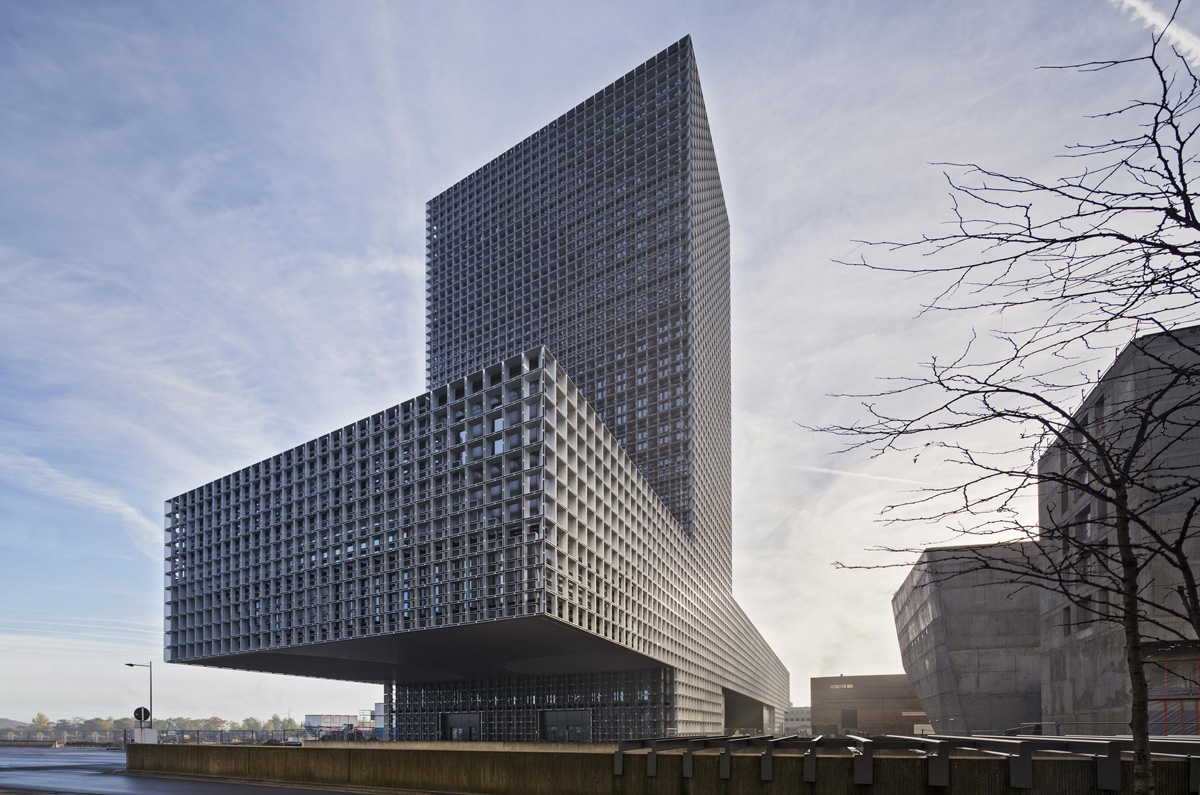 Paris, Spring 2016 – The “Maison du Savoir” is both an icon of the future and a reminder of the past. Conceived by Baumschlager Eberle Architekten as the focal point of the new University of Luxembourg campus and constructed in cooperation with Christian Bauer & Associés Architectes, the building is a striking and highly visible landmark. What was once the site of a steel plant in the Belval district of Esch-sur-Alzette is now the centrepiece of the new Cité des Sciences. The design of the “Maison du Savoir” has its origins in an international competition won by Baumschlager Eberle Architekten in association with Christian Bauer & Associés Architectes. Planning started in 2007 and construction work in 2009. “The ‘House of Knowledge’ forms the organisational and communications core of the complex”, says project leader Elmar Hasler, explaining the underlying idea of the building. The horizontally and vertically elongated structure accommodates the general infrastructure of the university, which was founded in 2003. This includes lecture halls, seminar rooms and professors‘ rooms as well as administrative offices and catering facilities. The adjacent buildings of the individual institutes clearly relate to the central location, their front ends being grouped around the “Maison du Savoir” and the planned library building.

The structure seeks to build a bridge to the past when steel was produced on the 27.3 hectare site at the “Terrasse des Haut-Fourneaux“. The 18-storey tower block matches the dimensions of the former steel furnaces. The floating sensation felt is due to the pre-stressed concrete constructions which project out from the second floor upwards. In urban development terms the “Place du Saint-Esprit” in the north is connected with the open spaces for the library and institute buildings in the south. The “Maison du Savoir” thus establishes an urban context without forfeiting its solitary position.

“In the interior we have devised a spatial programme which facilitates a variety of different uses”, says Elmar Hasler. The multi-purpose structure allows for flexible ground plan configurations. The teaching rooms and professors’ rooms are arranged to form a network of paths, bridges and squares which correspond directly with the outdoor space. Foyers and seating areas provide places to meet and talk. Access to the upper levels of the building is via high stairwells which bring plenty of daylight to the areas that do not form part of the facade. The Maison has its own garden on the fourth floor of the horizontal block. Both the two-storey auditoria hover above the ground at the corners of the horizontal beam. Baumschlager Eberle Architekten have opted for a double-shell facade. The internal layer forms the building’s climatic barrier. The outer layer envelops the building with a steel honeycomb structure, which enables the degree of visibility and thus the amount of light to be regulated. 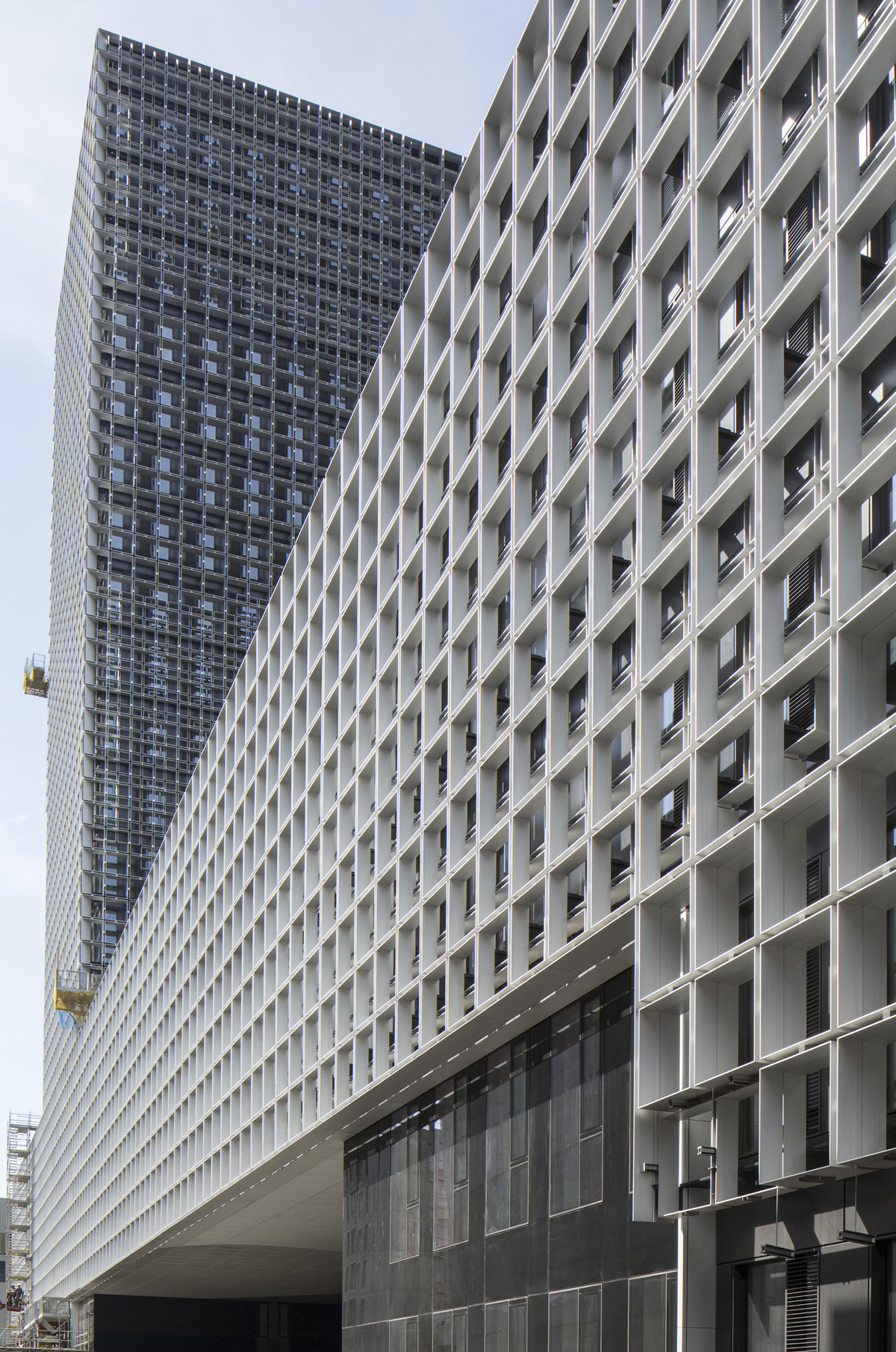 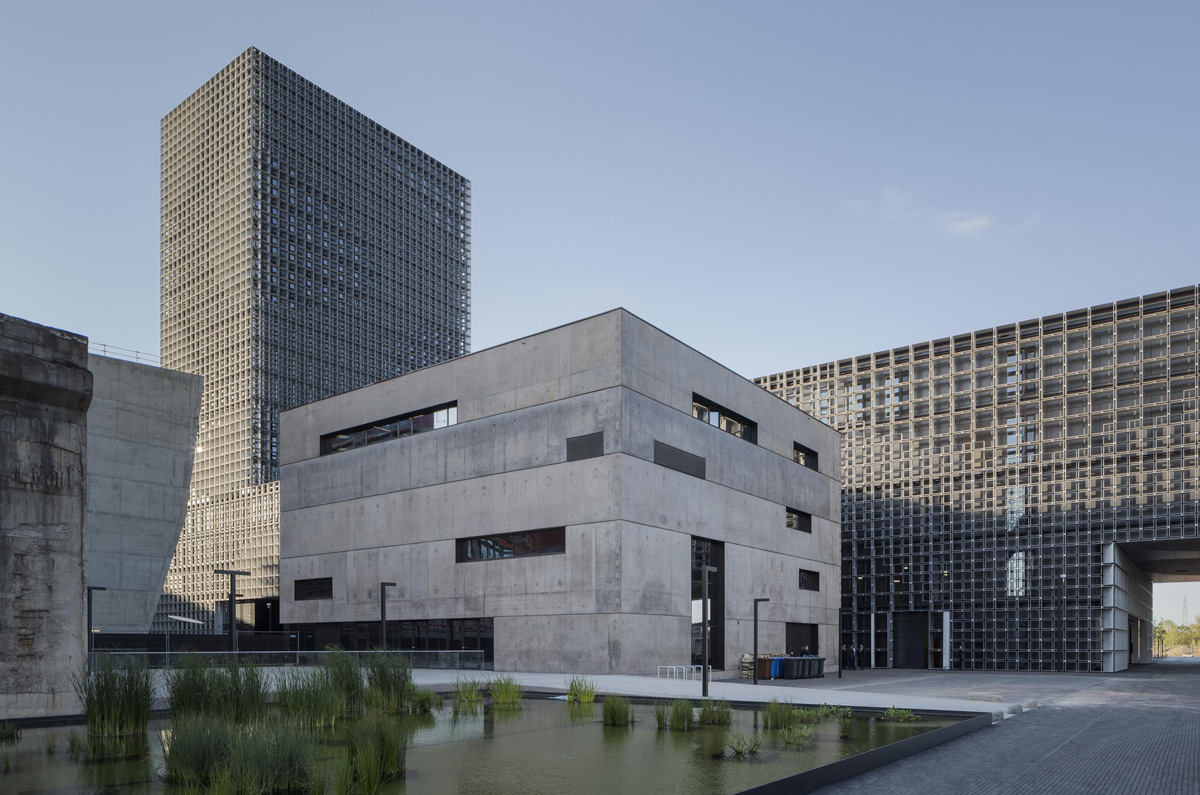 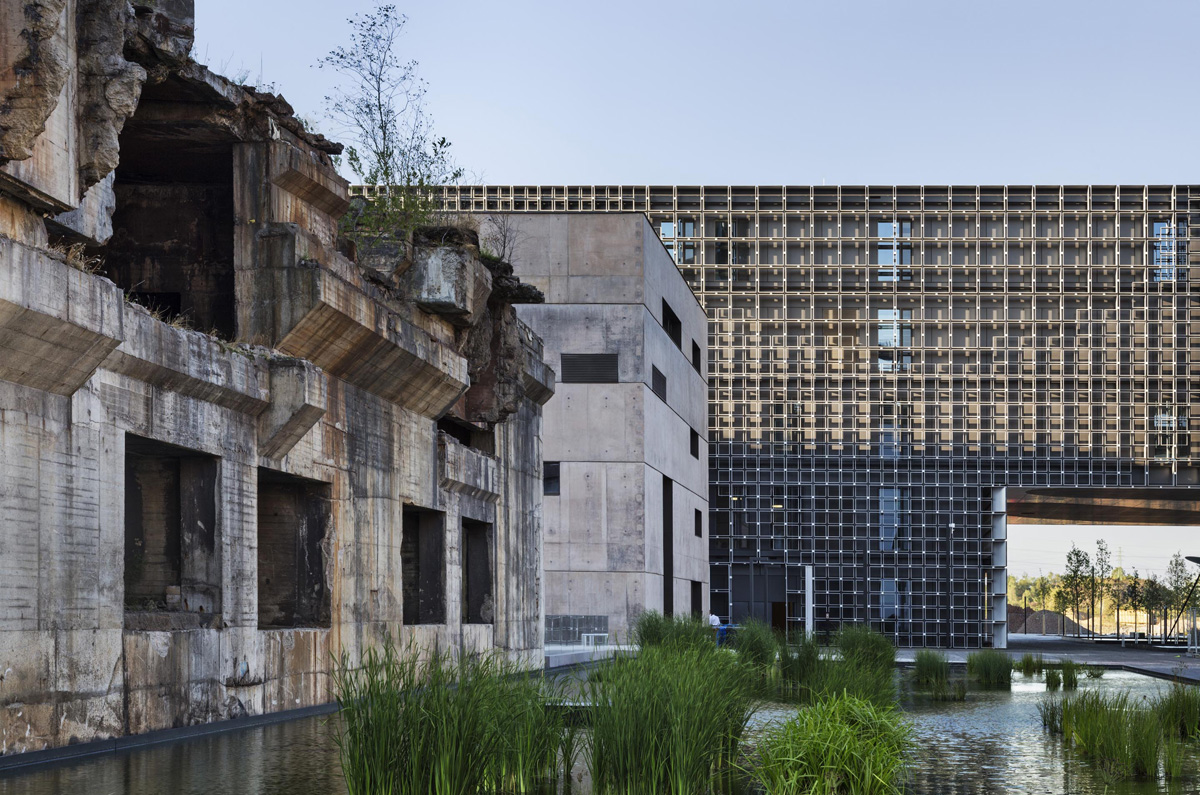 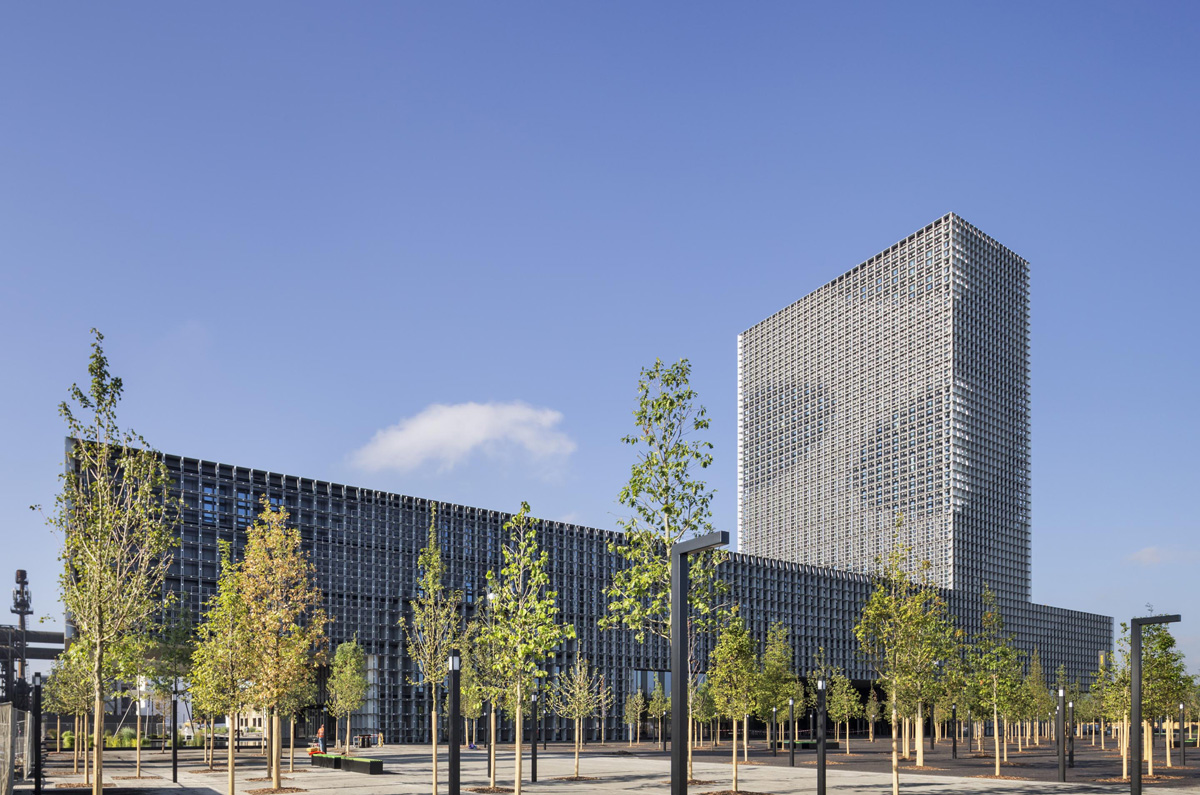 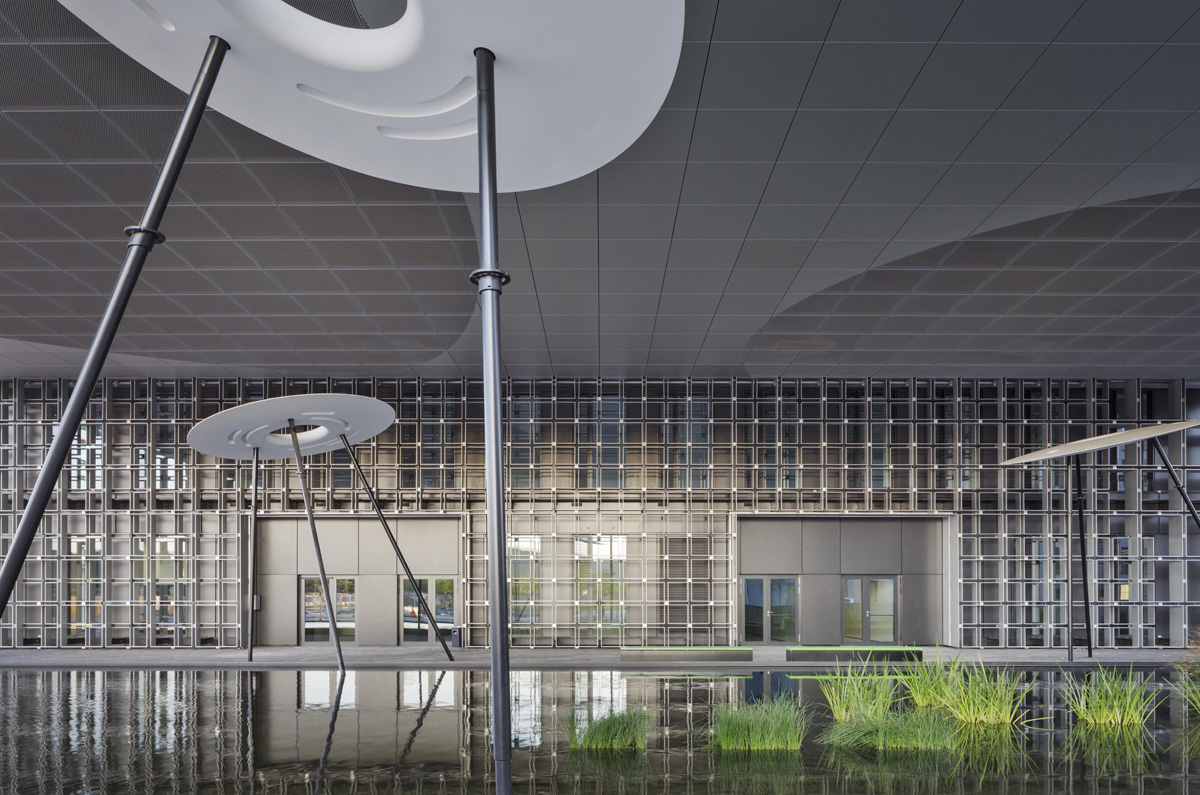 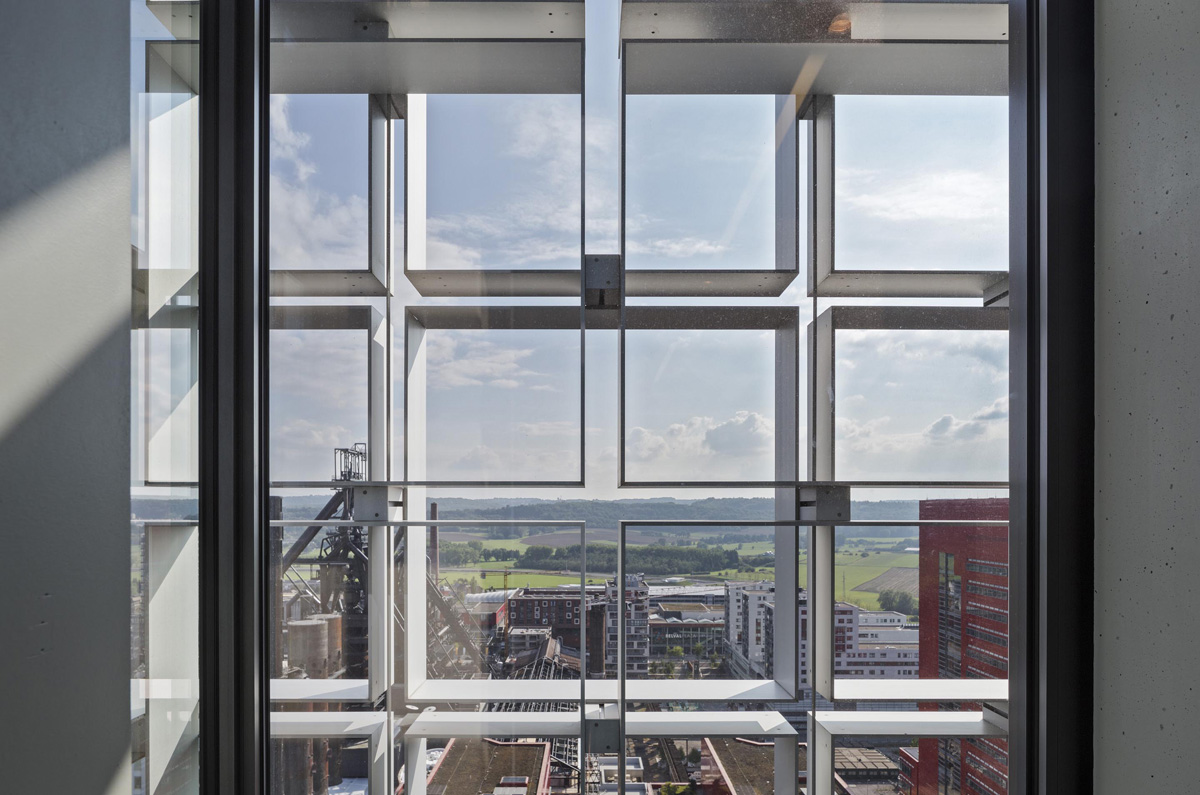 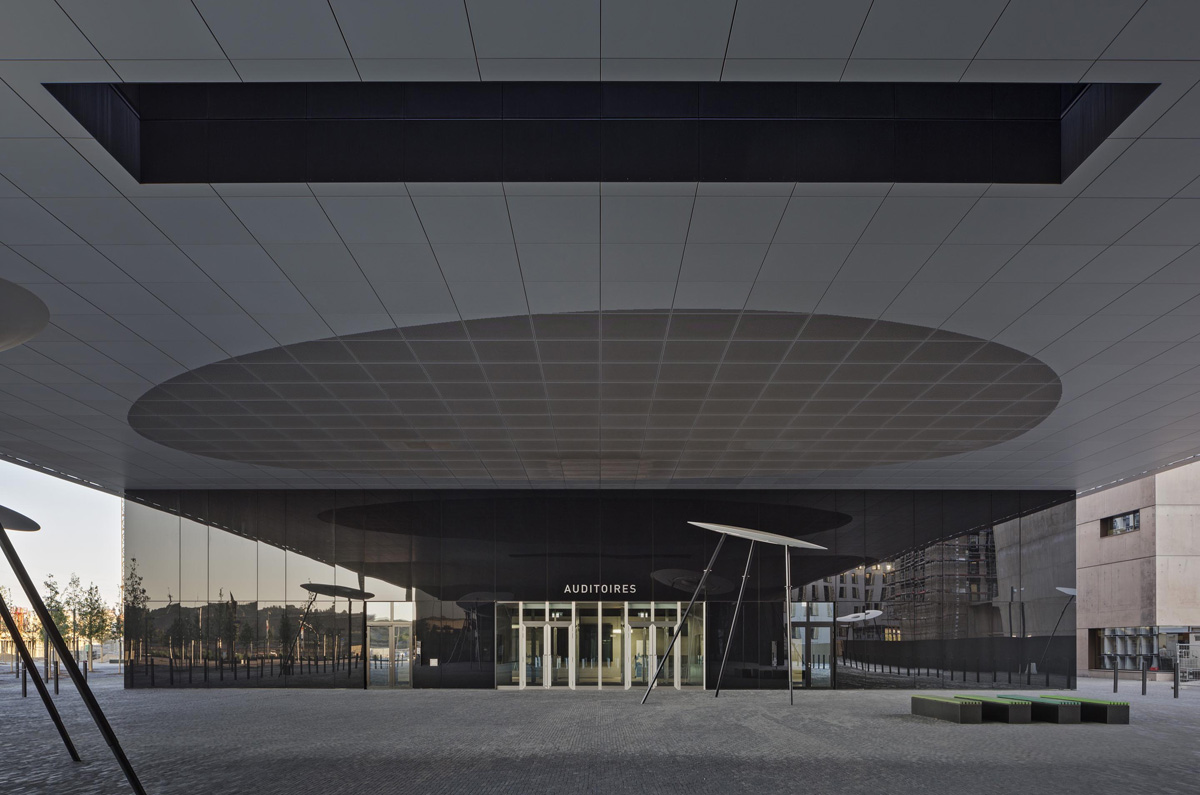 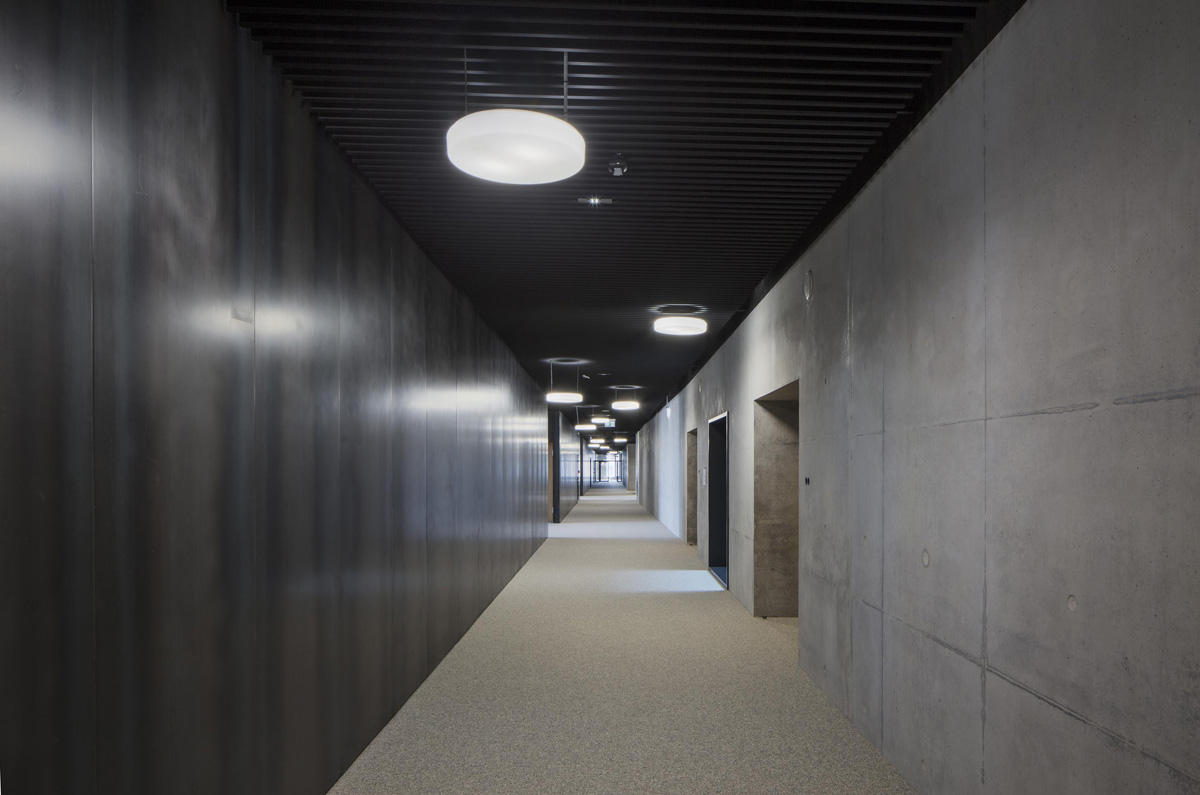 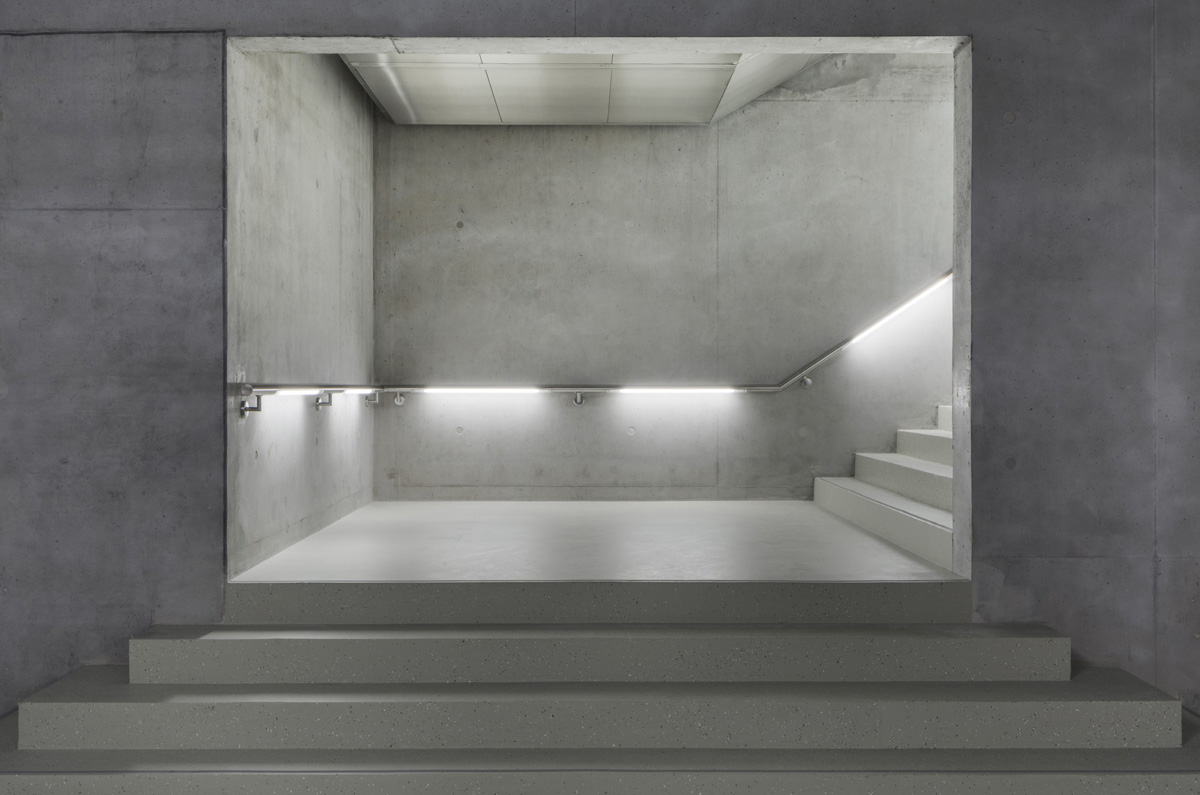 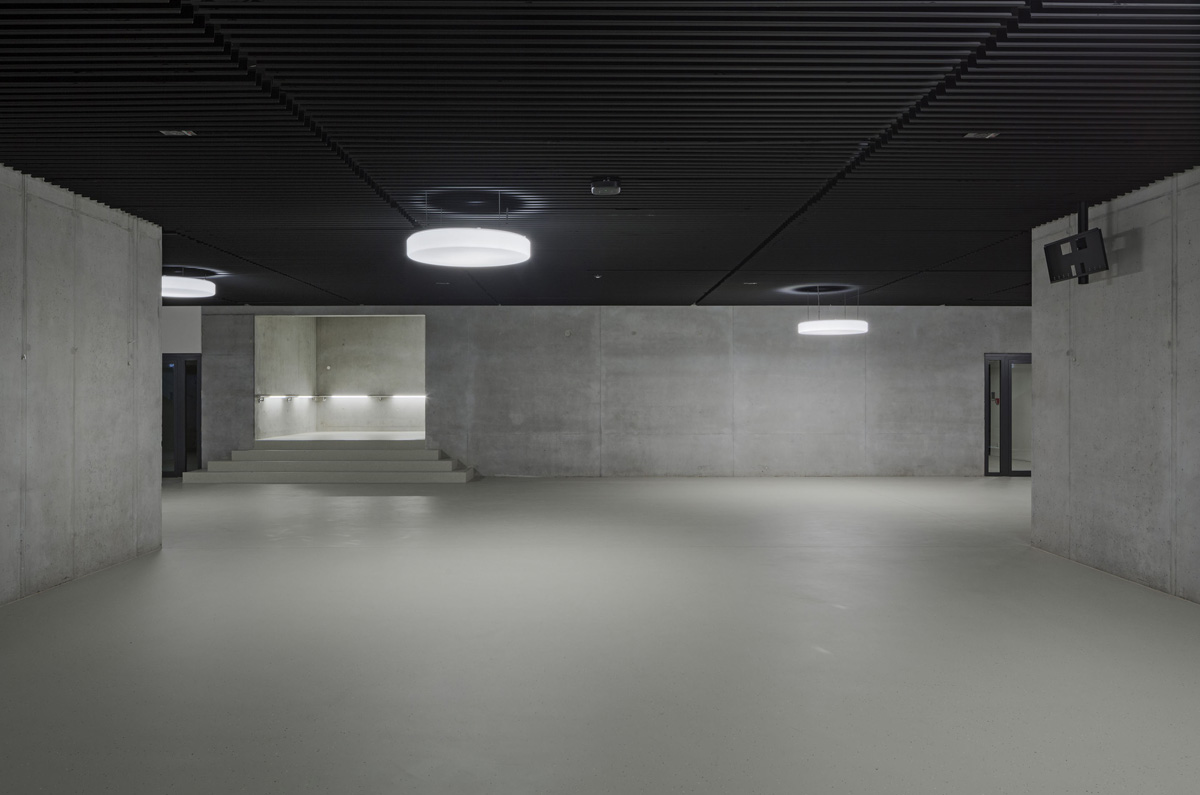 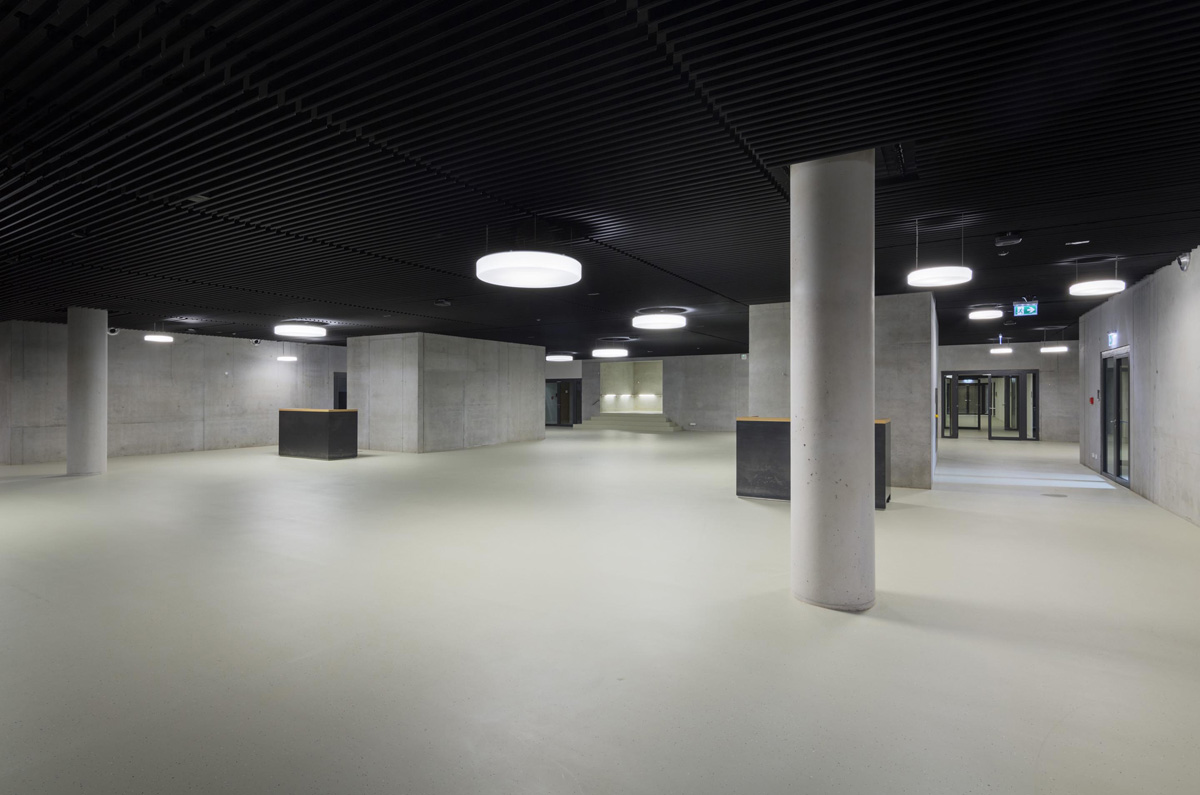 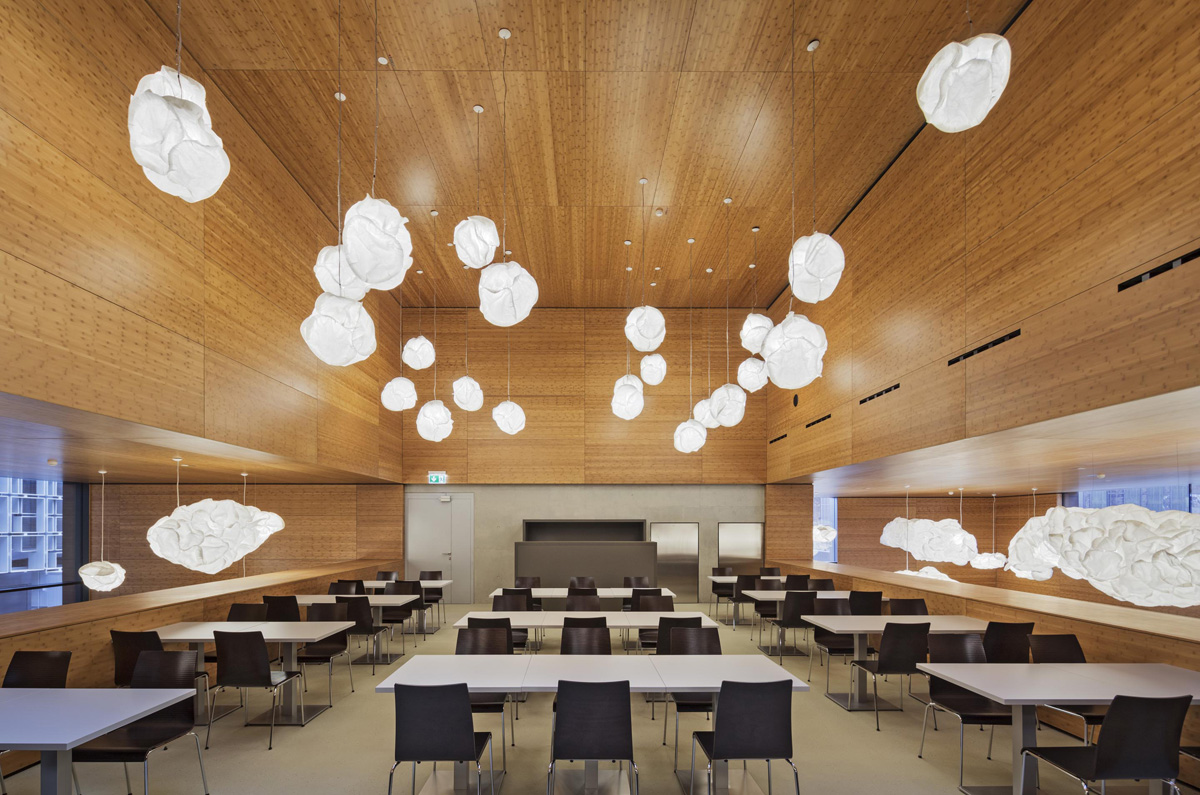 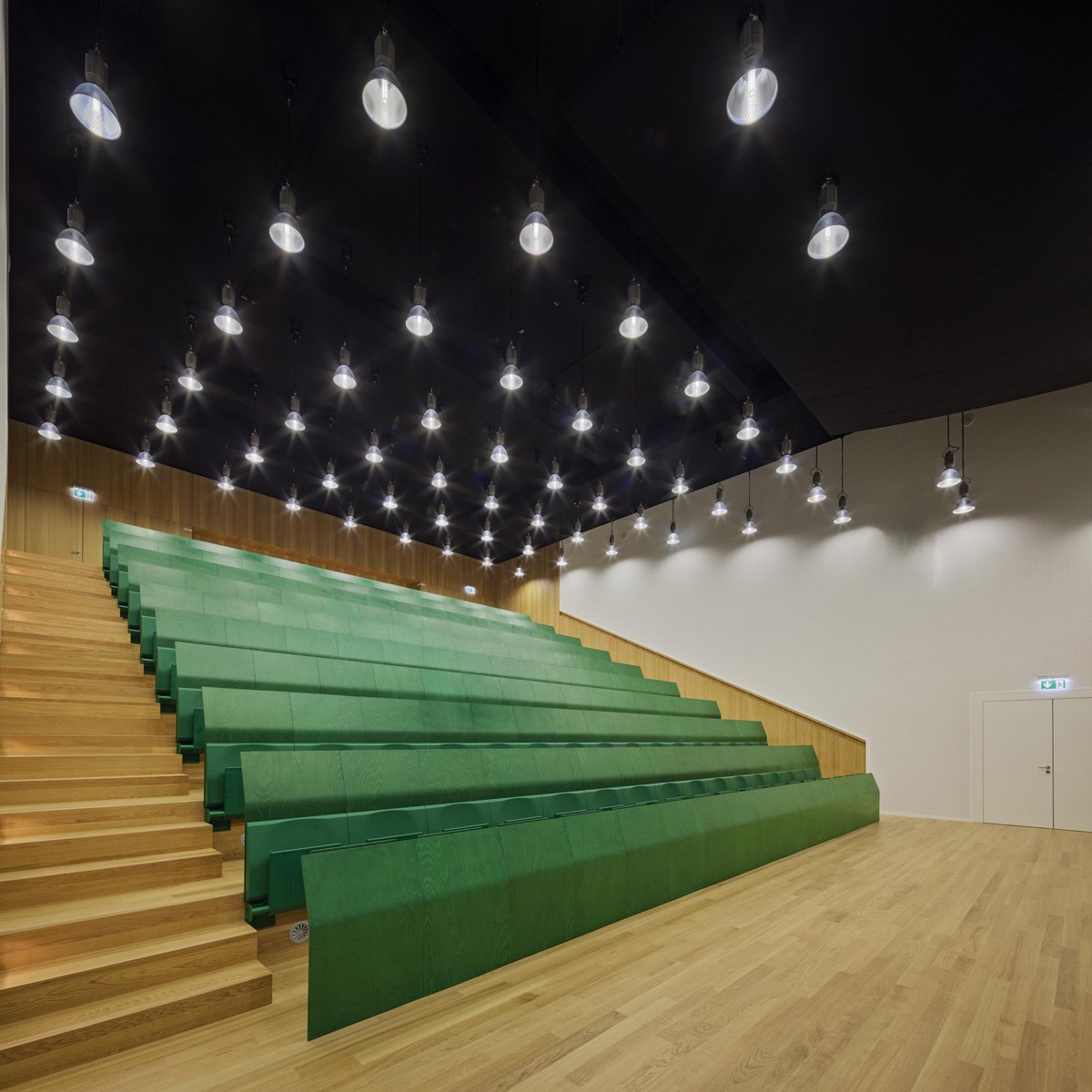 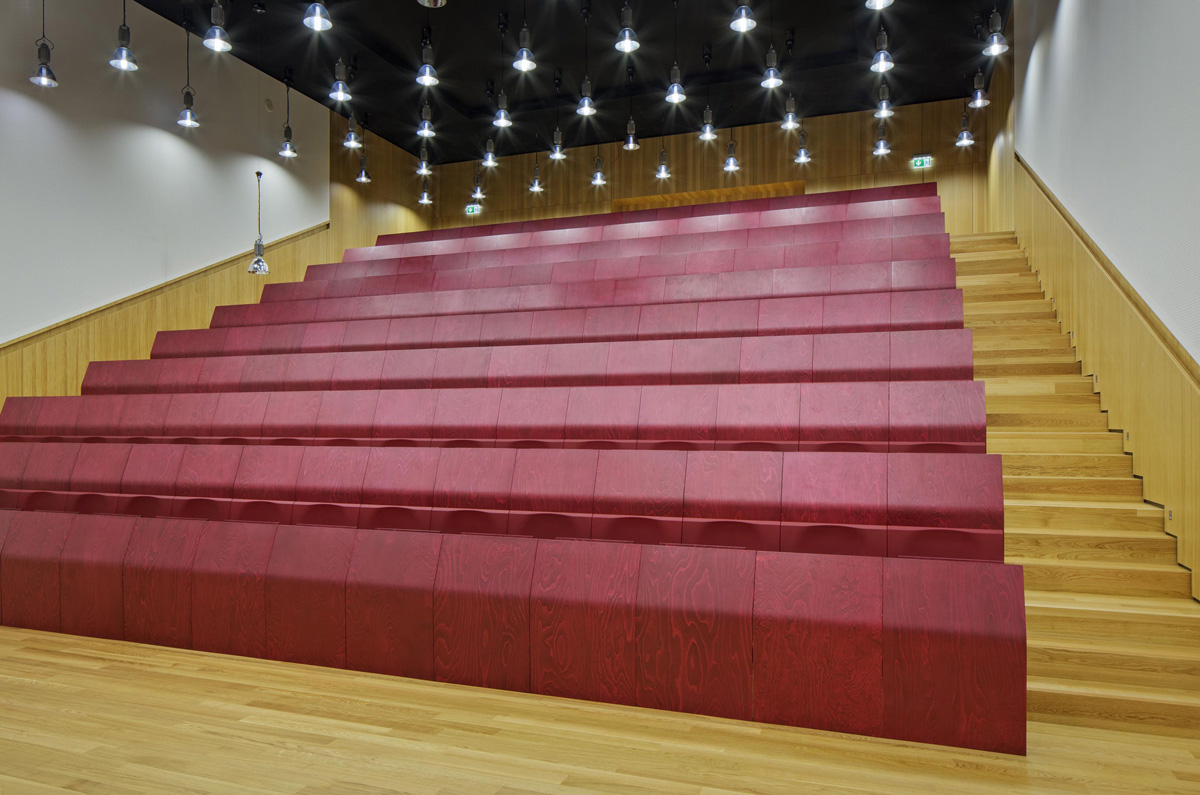 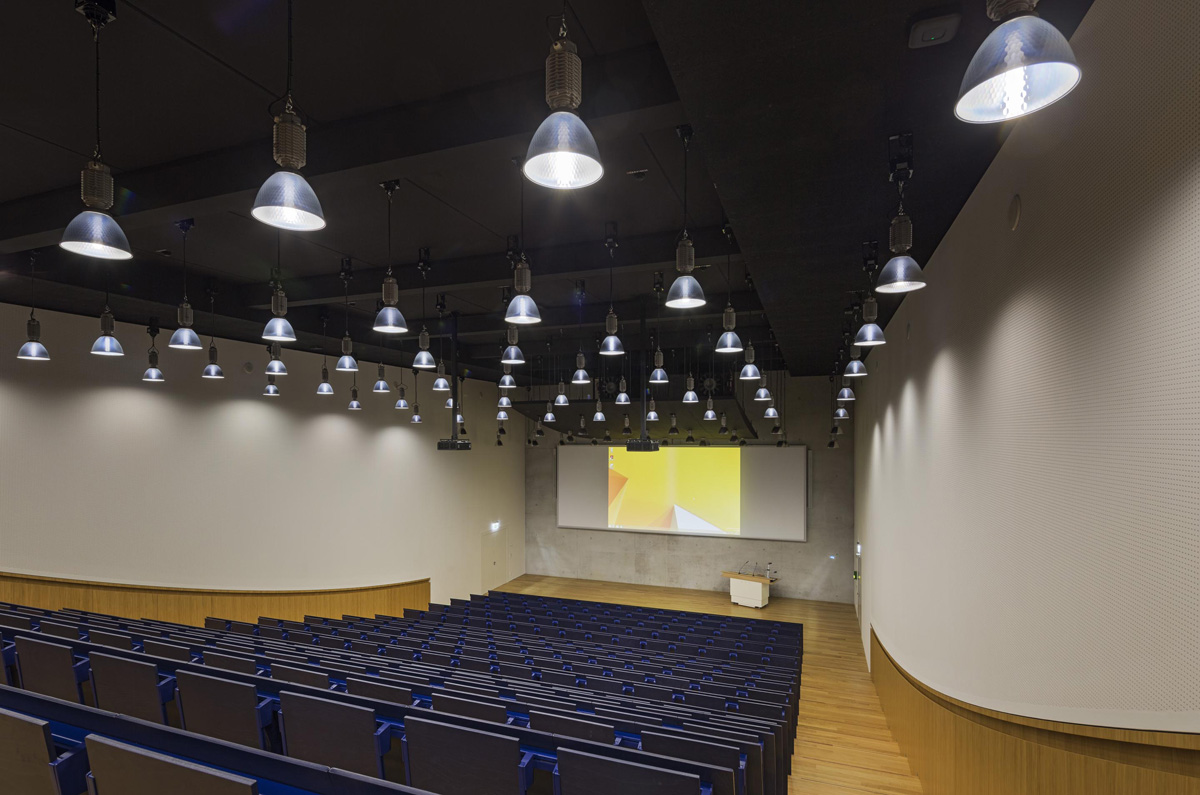 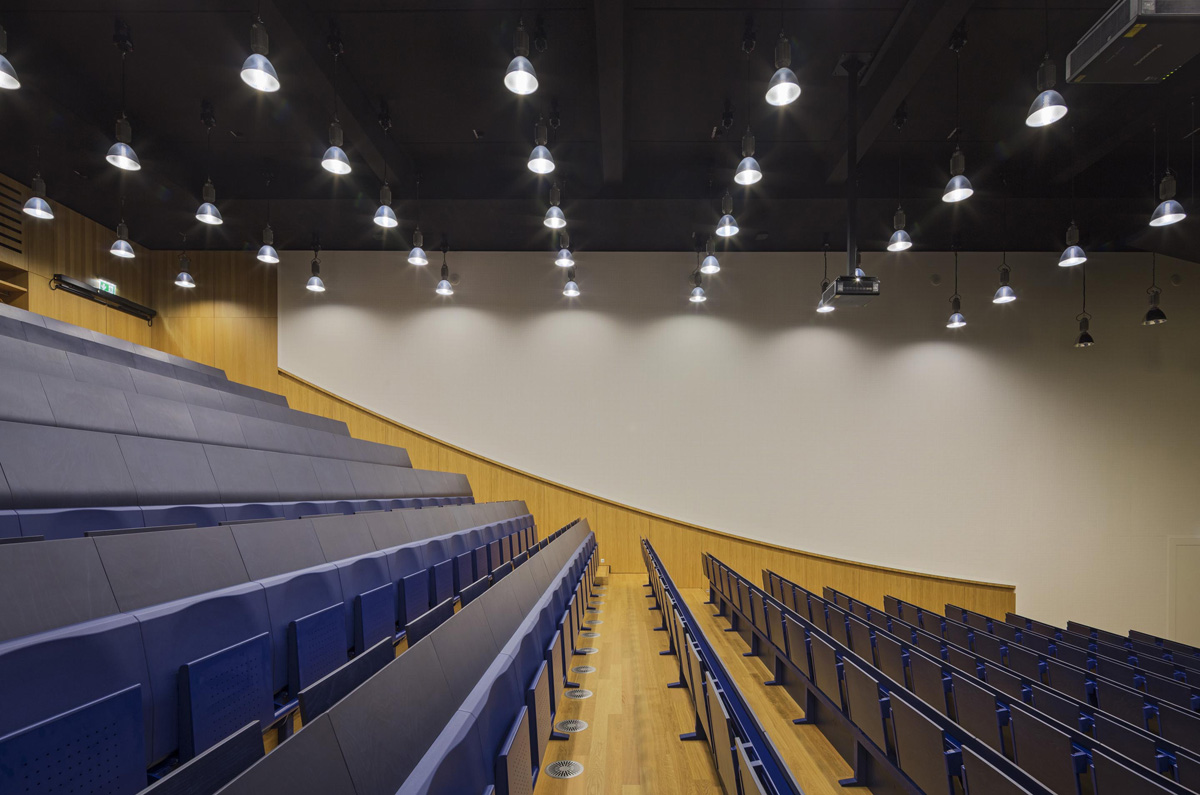