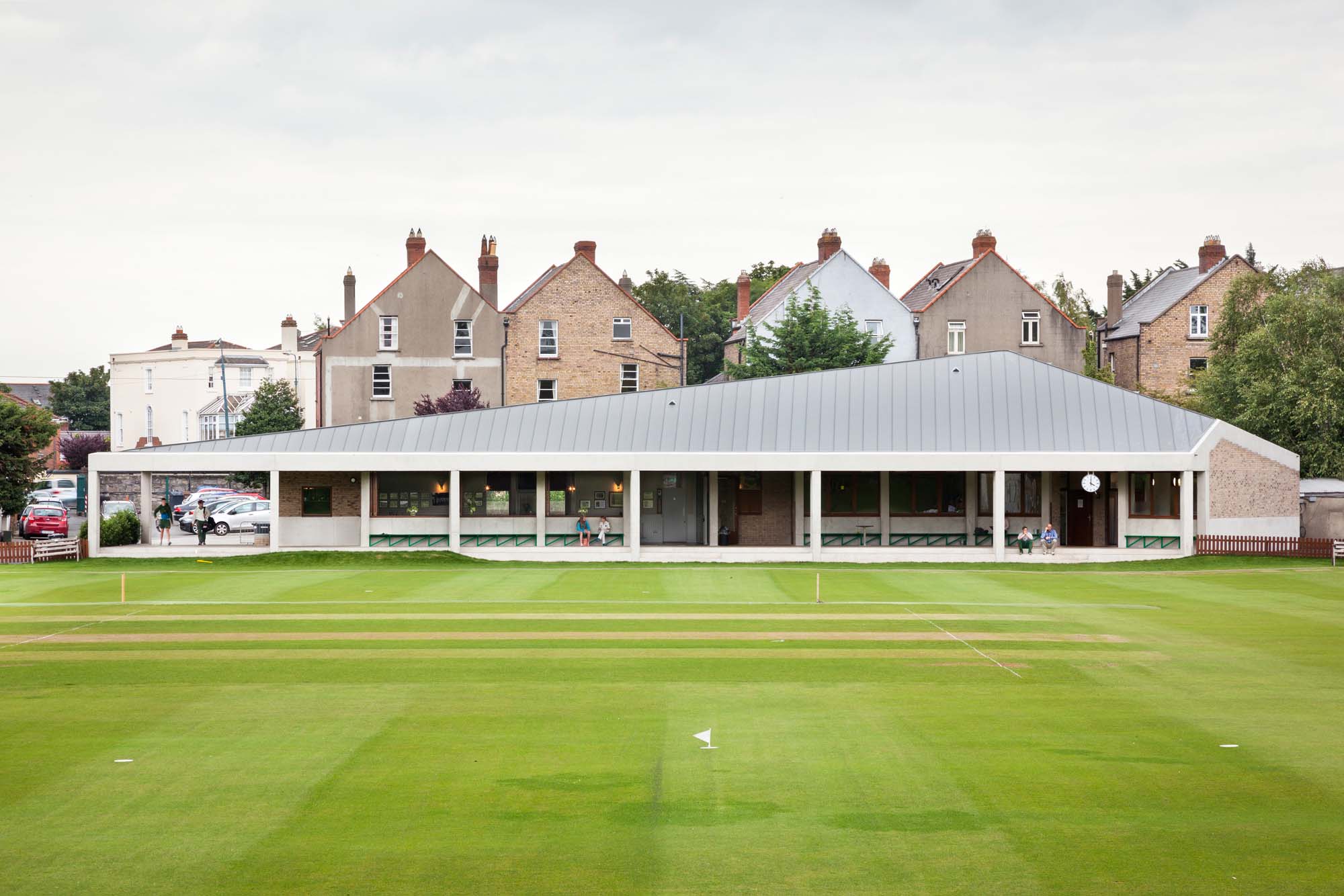 Merrion Cricket Club was founded in 1879 and has been at its present location since 1906. The site, tucked behind period brick houses on Anglesea Road, faces west towards the River Dodder. The new pavilion replaces an existing 1980’s pavilion which was severely damaged by flooding in 2010 – the last of 4 recorded floods on the site since 1900.

The location and footprint of the new pavilion was dictated by numerous site constraints. Although the form of the new building appears from certain vantage points to be highly irregular, it is in fact a symmetrical pyramidal volume cut to fit the irregular geometry of the site.

The outline of the interior space largely follows that of the earlier clubhouse. A large pitched roof is stretched over these spaces to provide an apartment (for the club professional) under the apex, a covered viewing terrace facing the pitch and an entrance portico which frames the square on approach. The distorted roof accommodates the multiple requirements of the programme while recalling a singular pavilion building. Underneath this main roof the interior rooms are nested, their forms relating directly to their own uses and desired atmospheres.

Particular attention has been paid to the area between the bar windows, the viewing terrace and the cricket pitch beyond to allow for multiple, simultaneous viewing opportunities. Here the section is stepped and layered so as to offer numerous formal and informal vantage points.

In response to the site’s flood risk the building is raised up a number of steps and has a waterproof concrete wainscoting up to window sill level. Temporary flood barriers are dropped into door openings in the event of a flood. Above this level, walls are either glazed or solid clay brick. These brick walls are used as permanent shuttering for the concrete ring beam which wanders around the perimeter of the building.

There were 2 driving factors in the technical resolution of the new pavilion at Merrion Cricket Club – a modest construction budget and flood protection. These factors were combined with the primary consideration of the desired coherency of form and aesthetic of the building. It was considered important that the site and budget restrictions should not overwhelm the experience of the building for the club member.

The most recent flood level on the site in 2010 was 1500mm above ground level. It was decided that the new pavilion should be protected up to 1700mm (head height for most people) above ground level. To avoid a bunker-like feel and maintain views from the main social spaces (the bar and tea room) to the cricket pitch, the building floor level was raised up by 3 steps (600mm) – the maximum permissible without guarding. A water-proof concrete ‘container’ was constructed around the internal spaces with the walls reaching up from ground level to 1100mm above the raised floor level – the ideal height to lean against while viewing cricket or sipping a drink. Wherever the waterproof walls are penetrated for doors, drop-in flood barriers are installed. The flood barriers are expressed by the concrete upturning into the brickwork at openings.

Rooms are internally insulated behind the flood protective walls. Internal linings are sacrificial should the flood barriers be breached. The line of flood protection is read throughout the internal spaces in the height of the timber wainscoting in the bar and tea room and ceramic tiling in the changing rooms. Where budget allowed, glazed windows and doors slide to one side, both to increase the connection with the viewing terrace and pitch and to decrease the annual cost of replacing broken window panes as a result of stray cricket balls.

The external viewing terrace is formed in the space between the flood protected internal rooms and the colonnade at the edge of the over-hanging roof. Green painted benches are fixed between columns under windows to the terrace. The delicate diagonally braced bench supports serve to visually contrast with the heaviness of the concrete structure. The edge of the raised concrete slab forming the external terrace is stepped to provide access to the pitch and informal seating at pitch level.

The tautness of the external form was achieved by ensuring flush junctions between external surfaces. The brick walls (a block and brick composite tied together, as solid brickwork walls were too costly) are laid directly on top of the walls of the waterproof container. There are no cut bricks and the concrete ring beam for the roof structure is cast directly on to the stepped top of the brick walls. The beam is over-cast on the inner face of the wall to allow for a recessed gutter detail. Gutters have mesh inserts to ensure costly cricket balls are not trapped at high level. Downpipes are concealed internally or cast into columns in the colonnade. The top surface of the ring beam slopes in 2 directions – with the top of the walls and with the slope of the roof – to maintain the profile of the building form.

The roof is formed from timber joists with steel ridges, the most cost-efficient method due to its similarity to domestic construction. The longer spans of joists are propped by internal walls. The roof is clad with standing seam pre-patinated zinc, chosen to withstand driving rain at a low pitch and cricket balls at high speed. 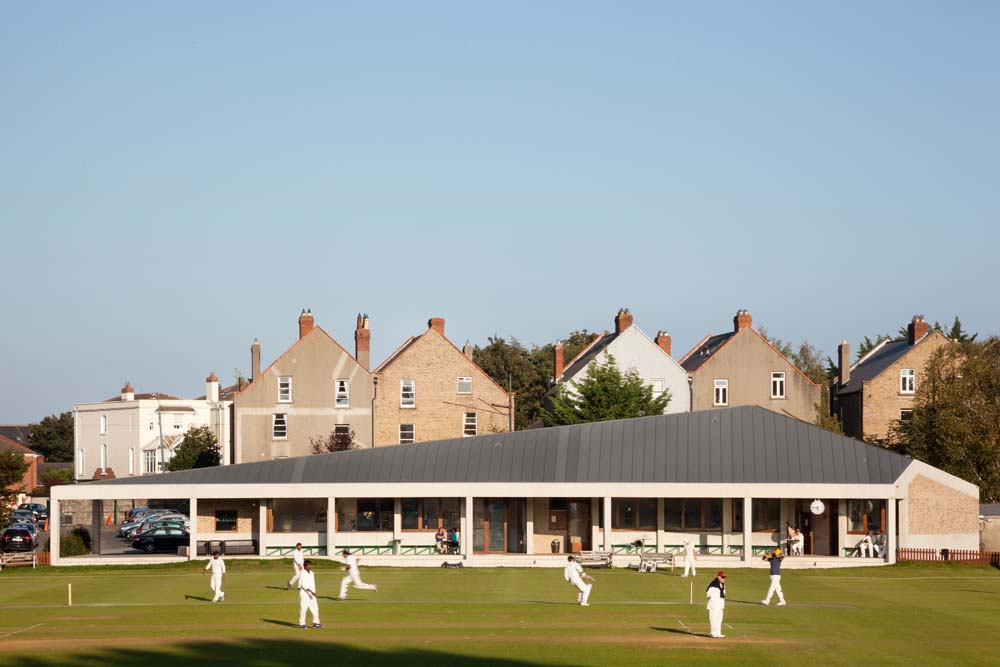 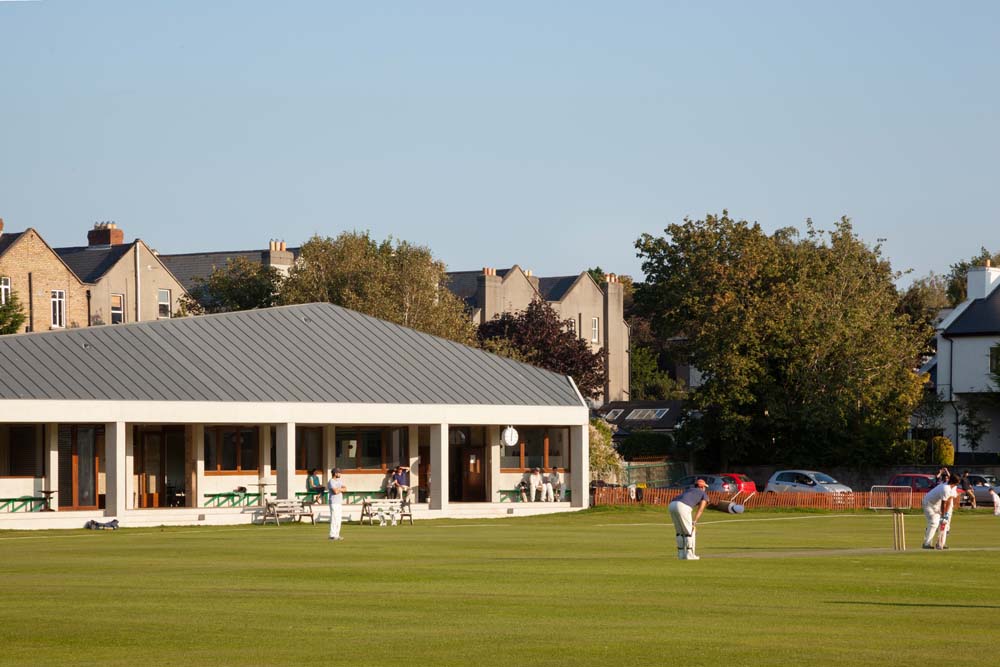 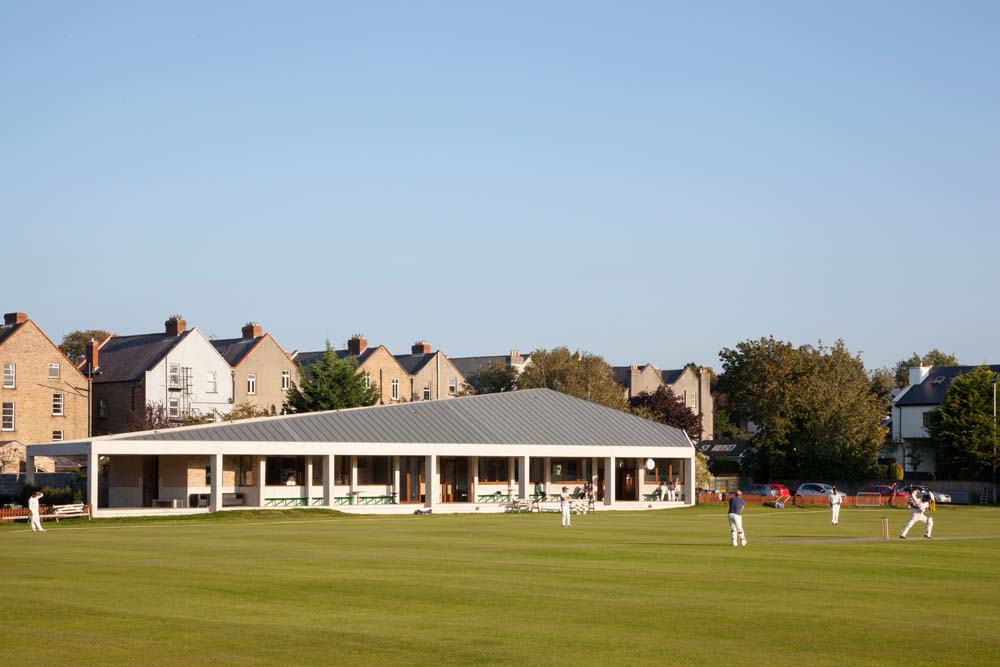 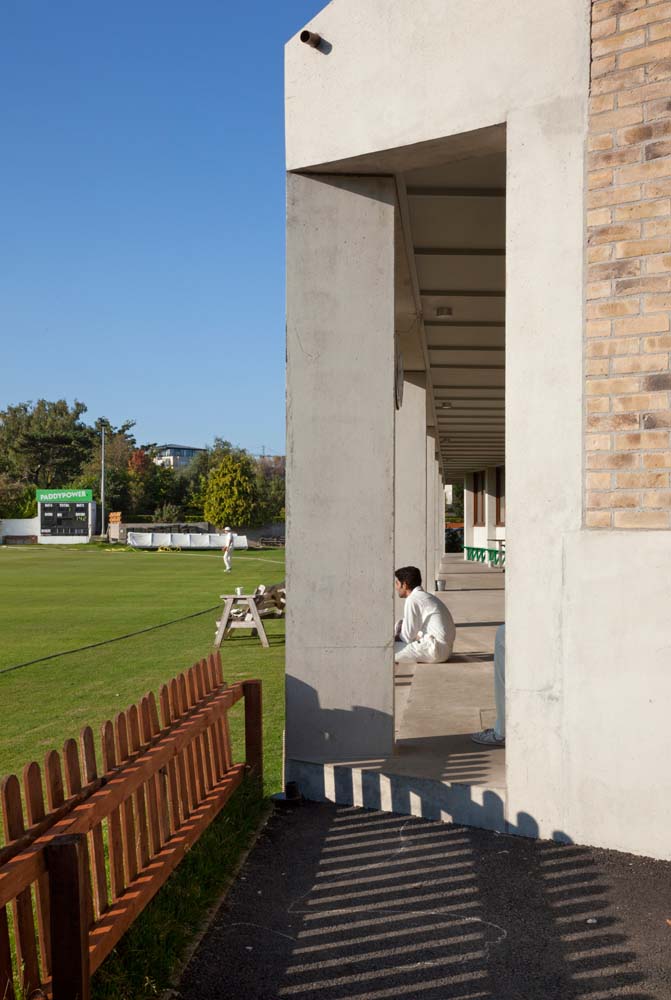 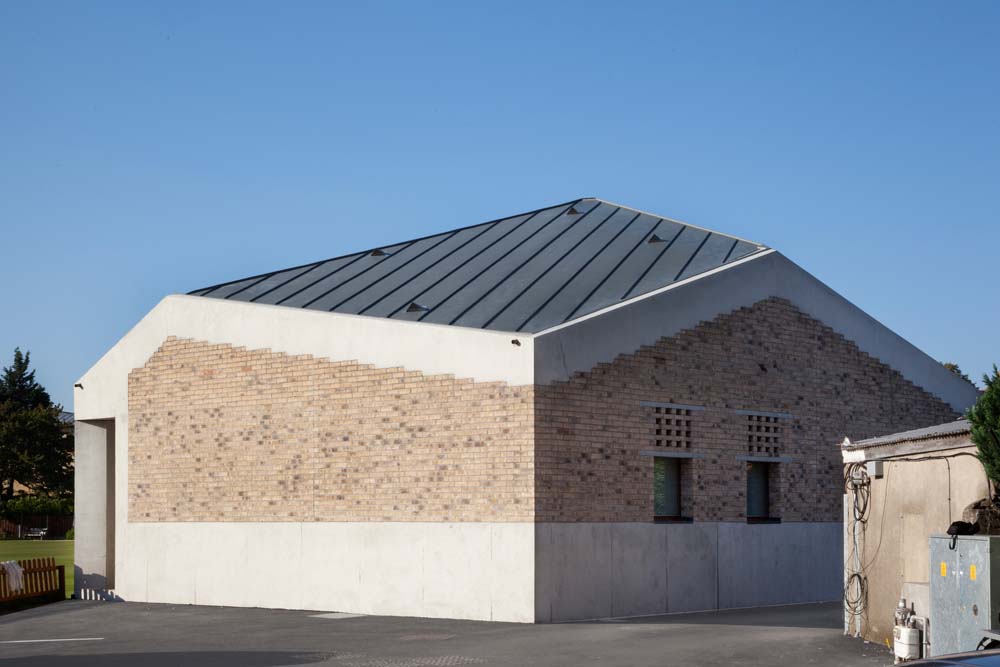 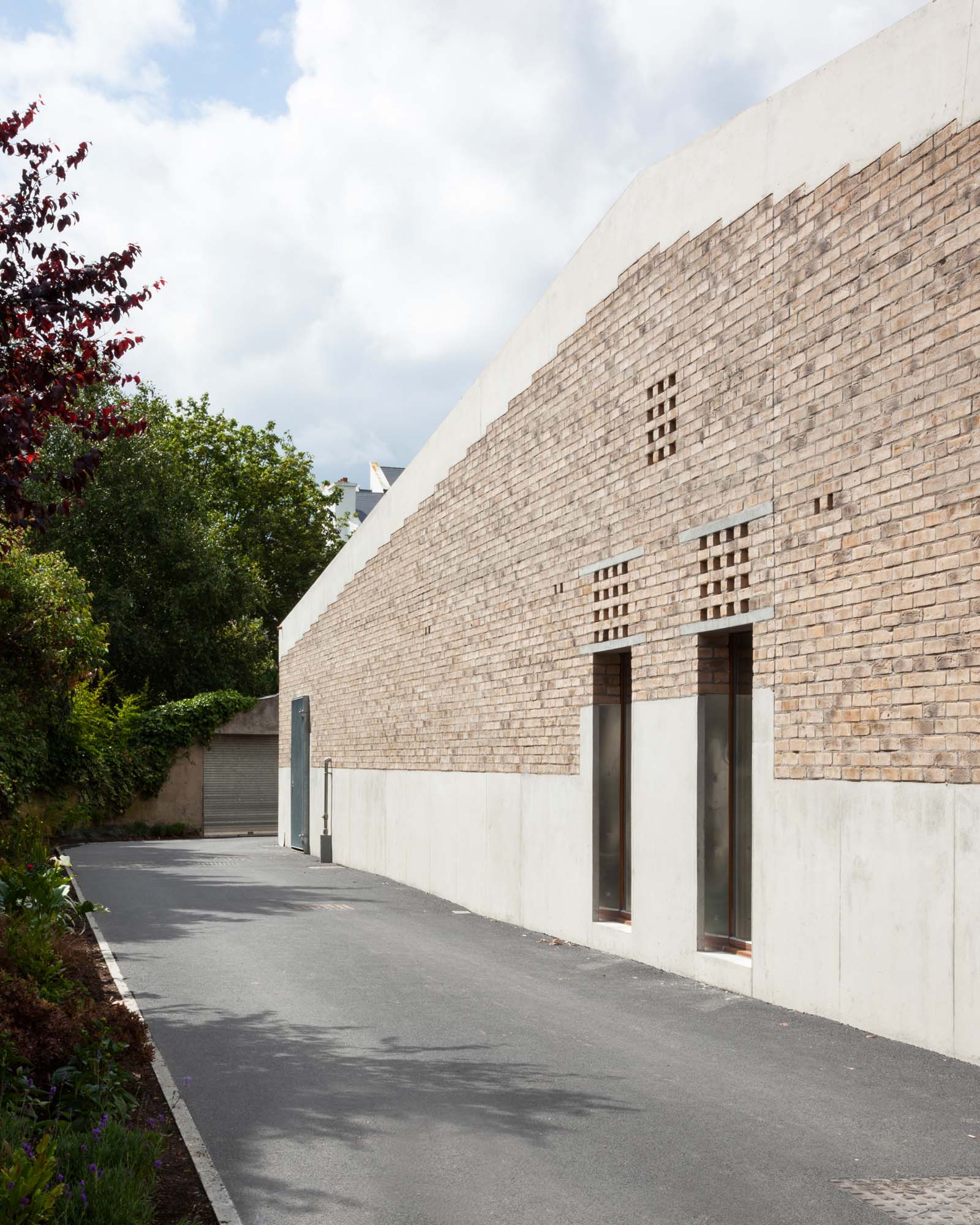 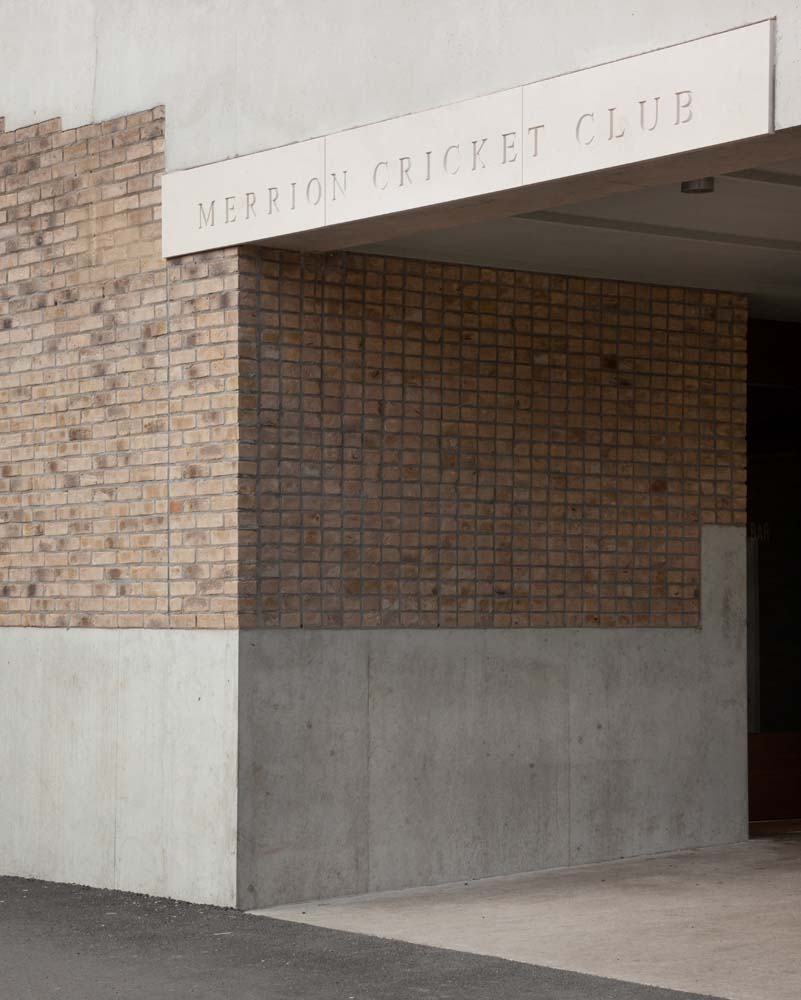 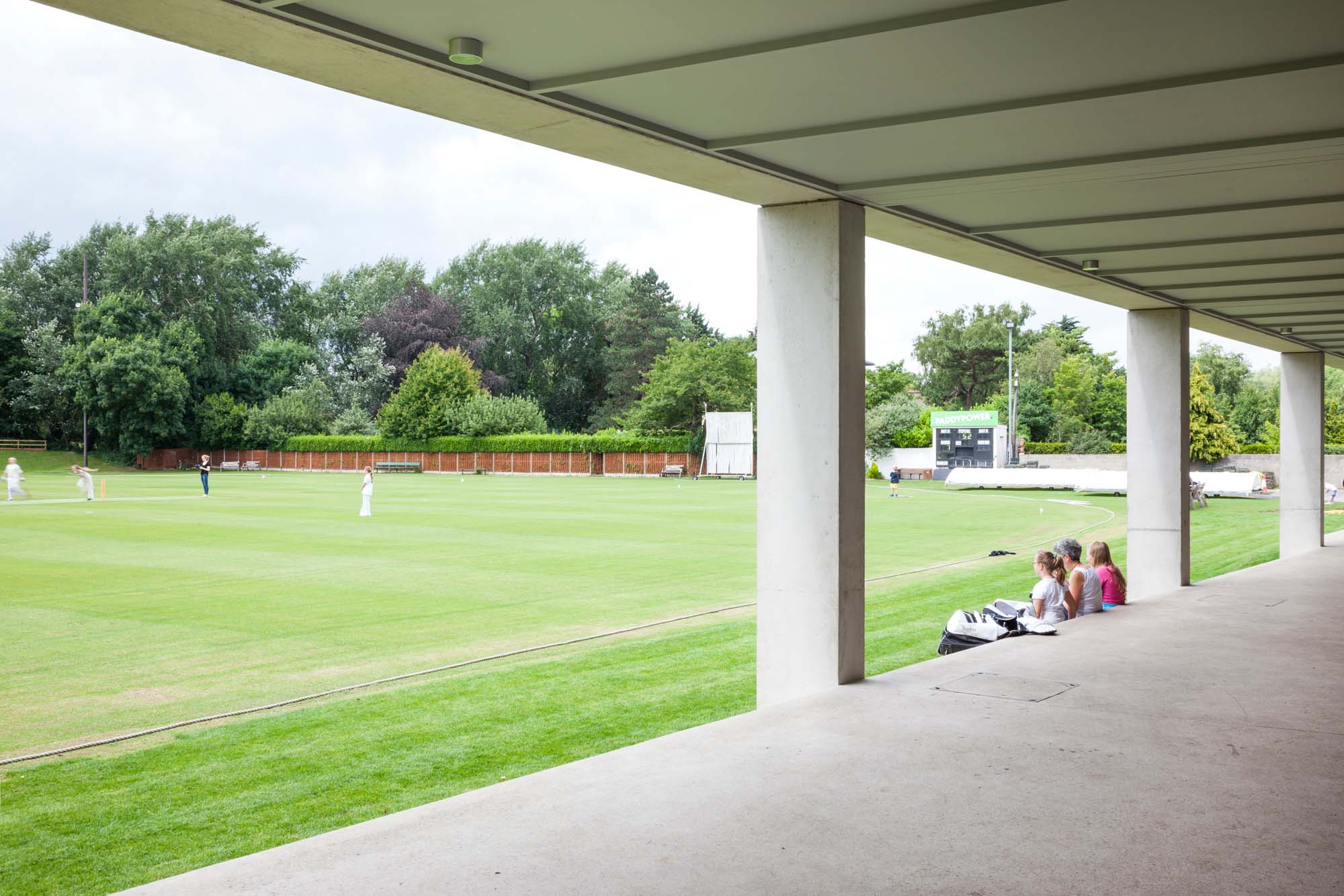 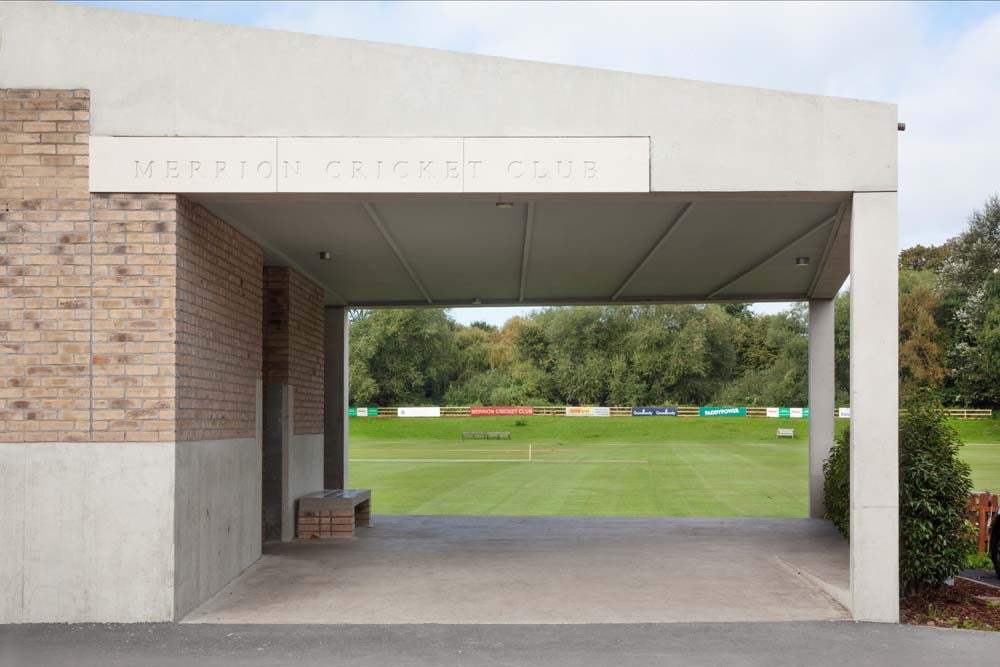 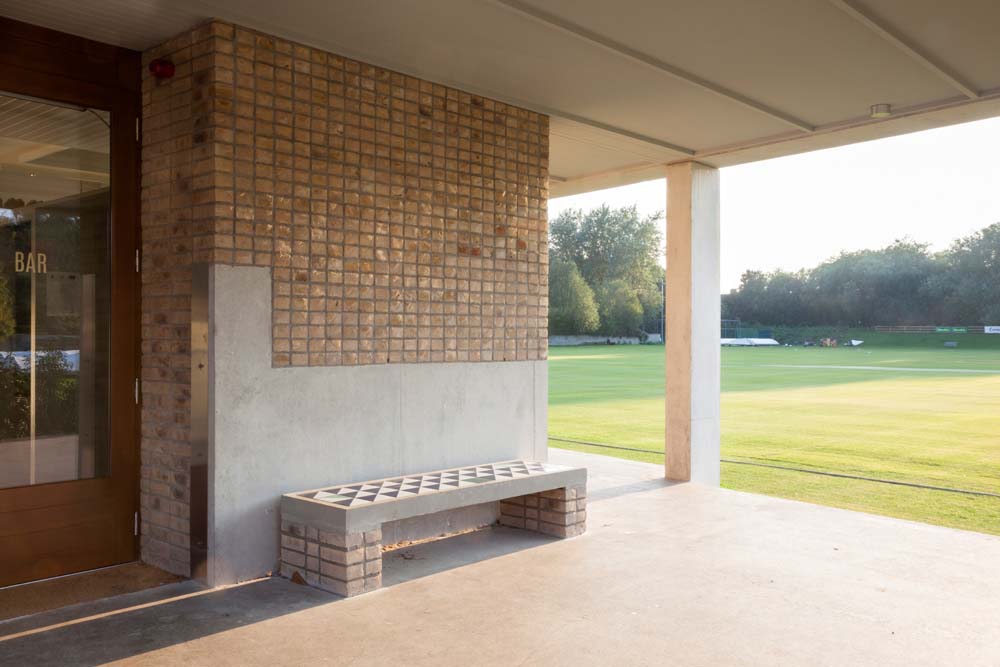 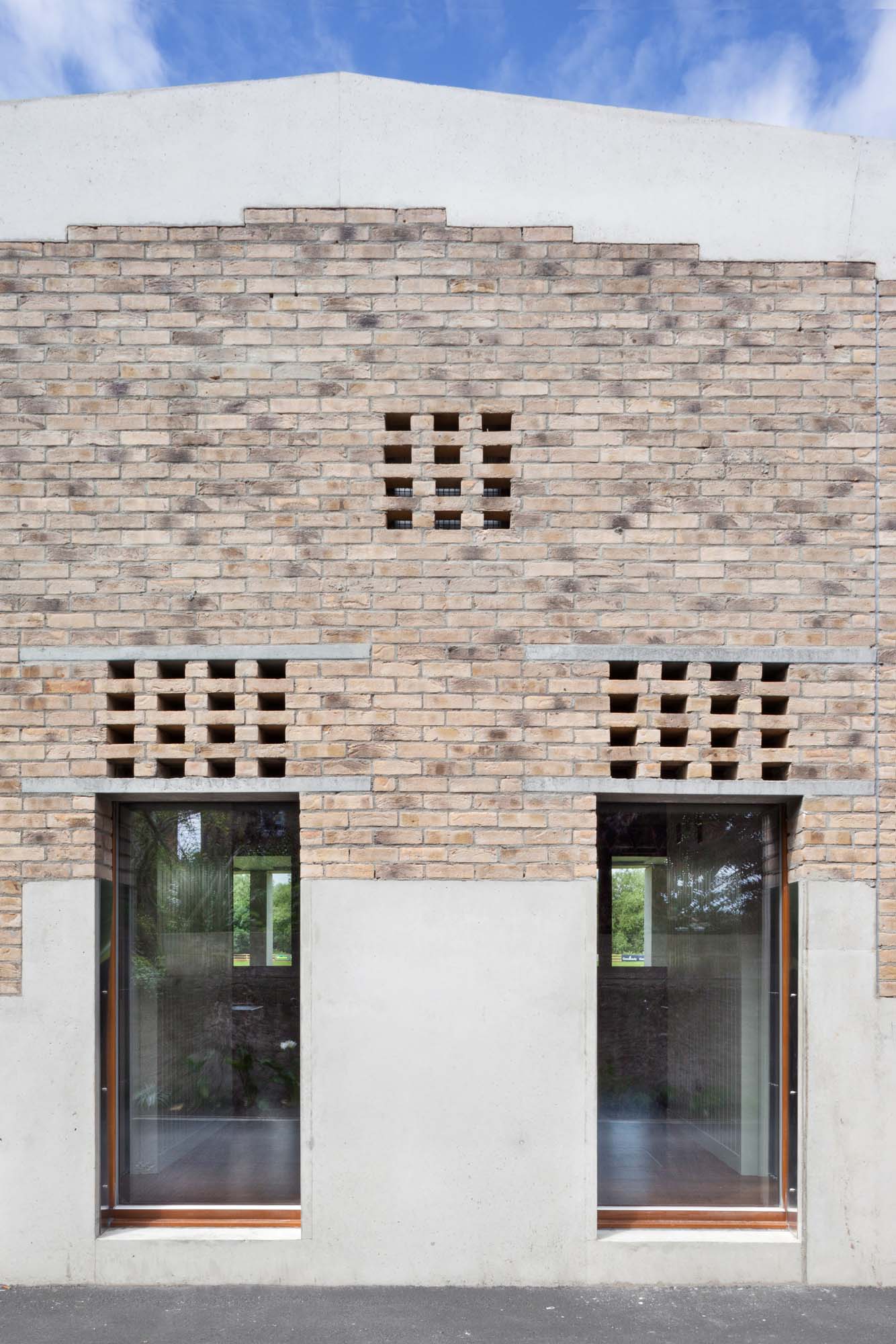 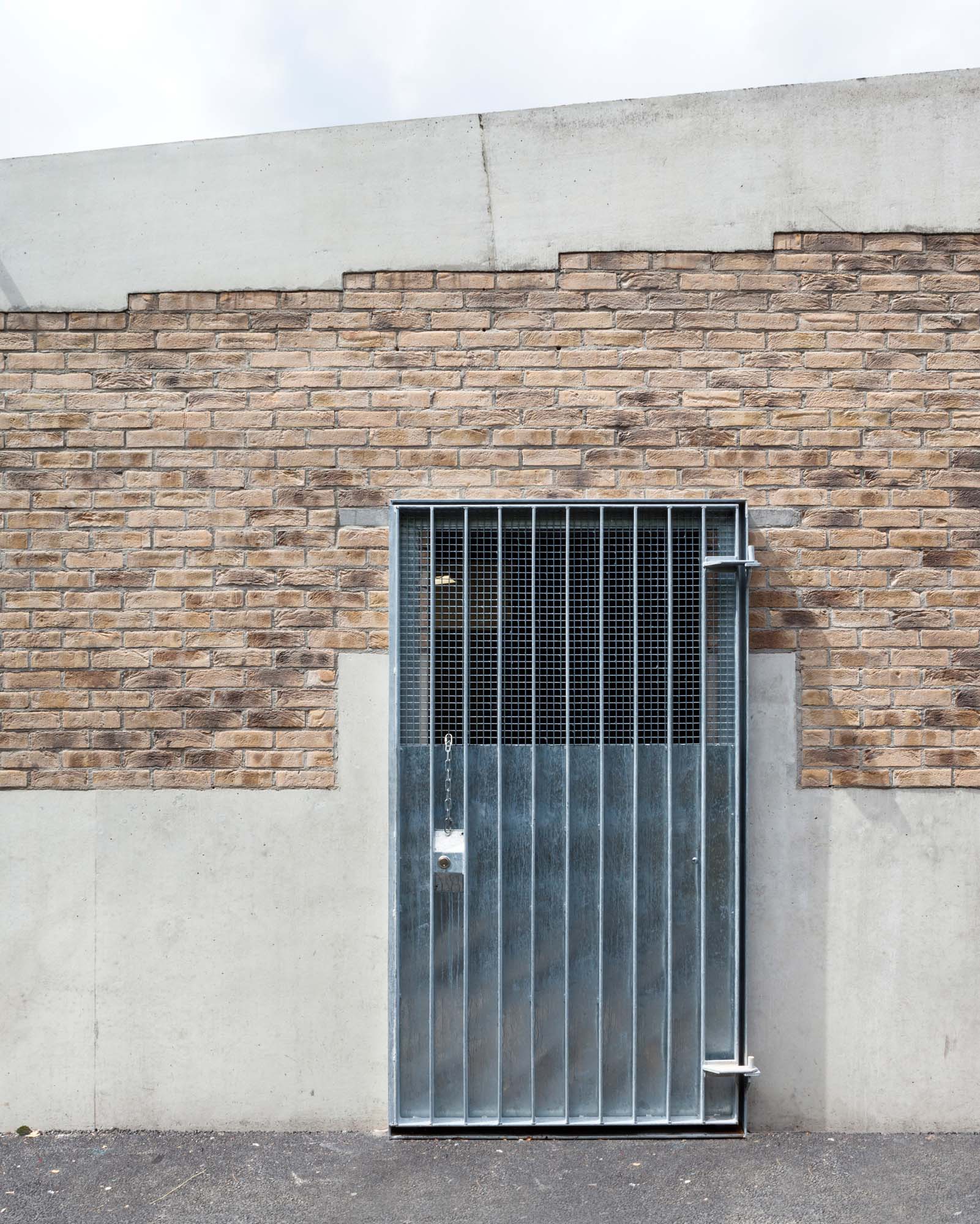 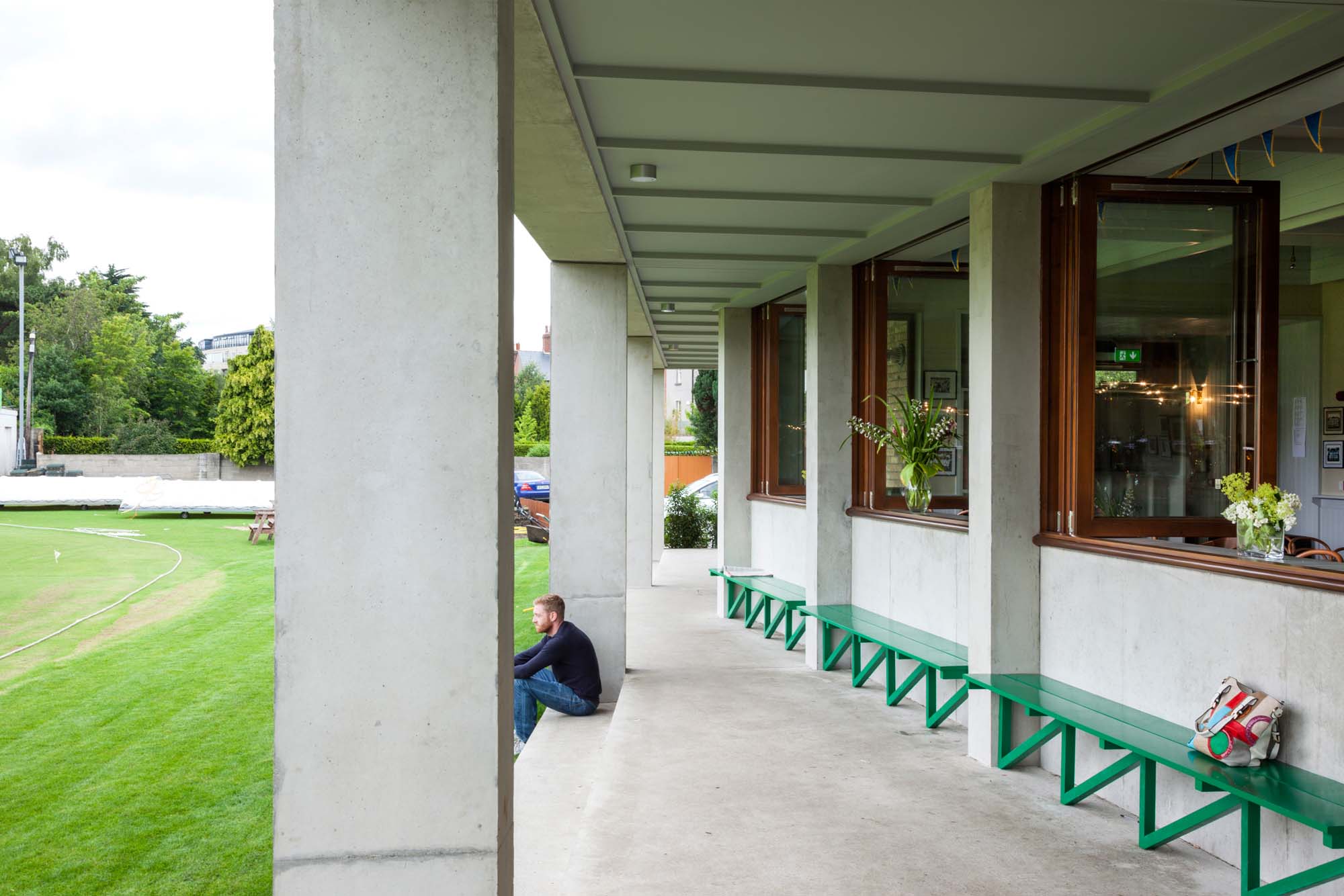 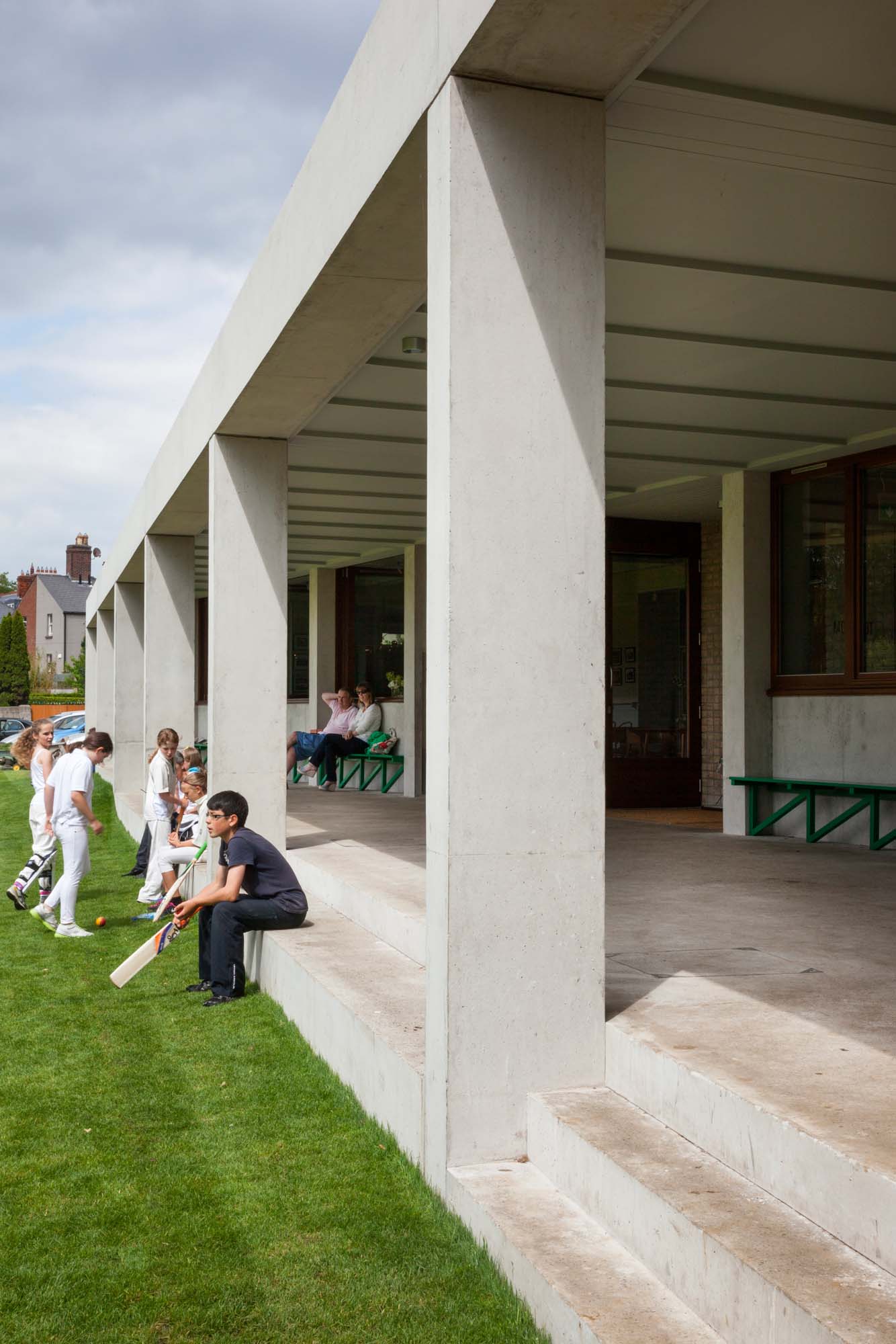 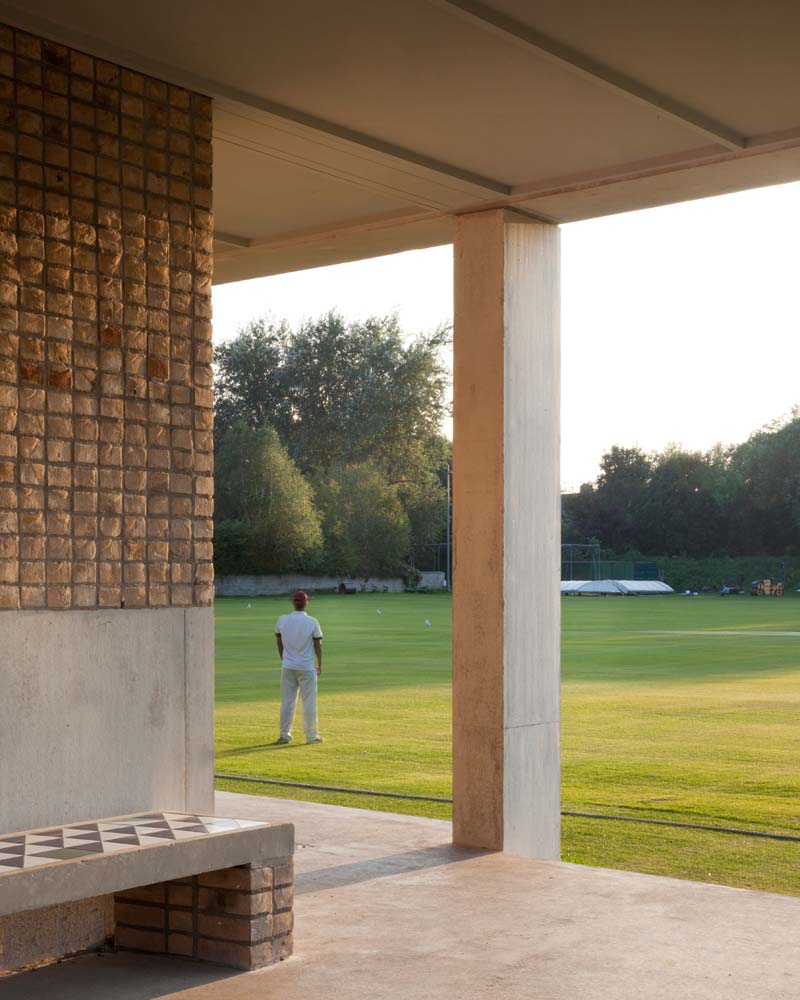 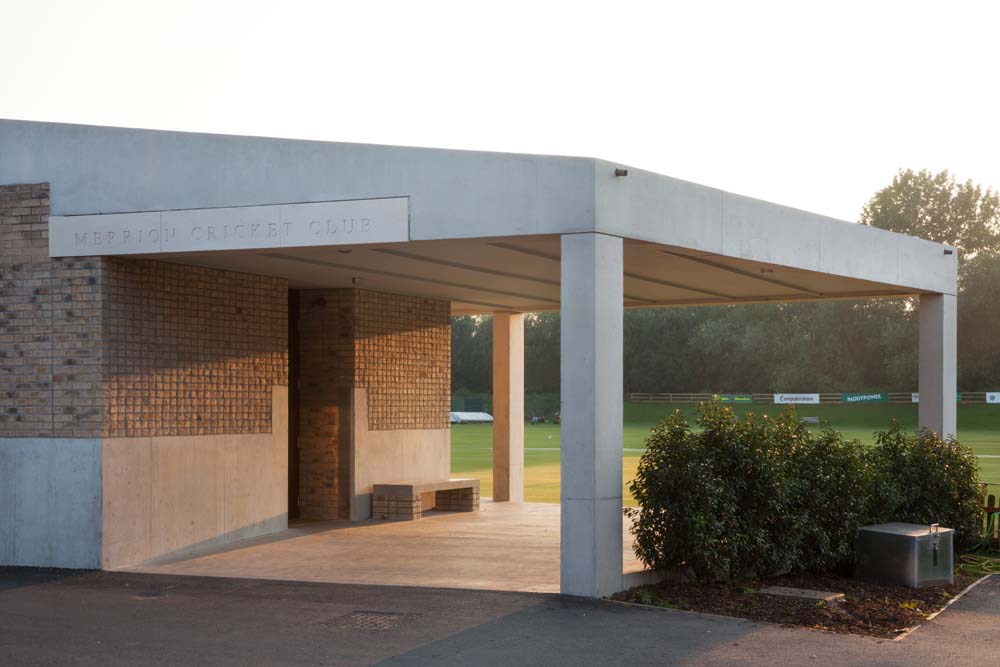 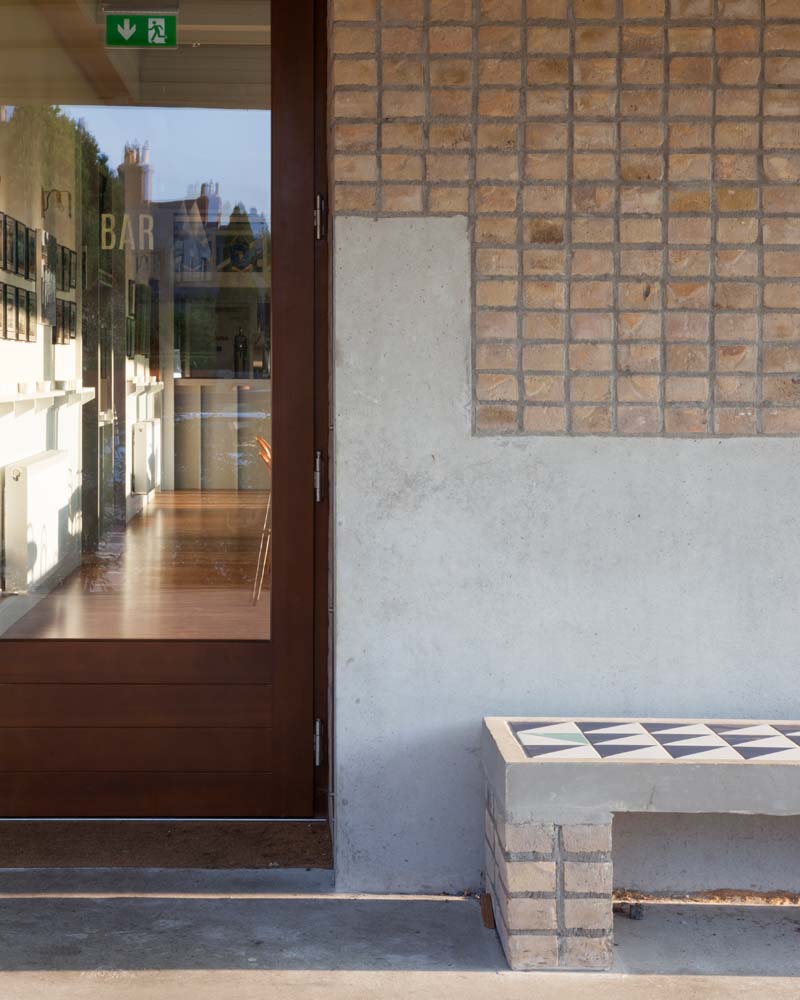 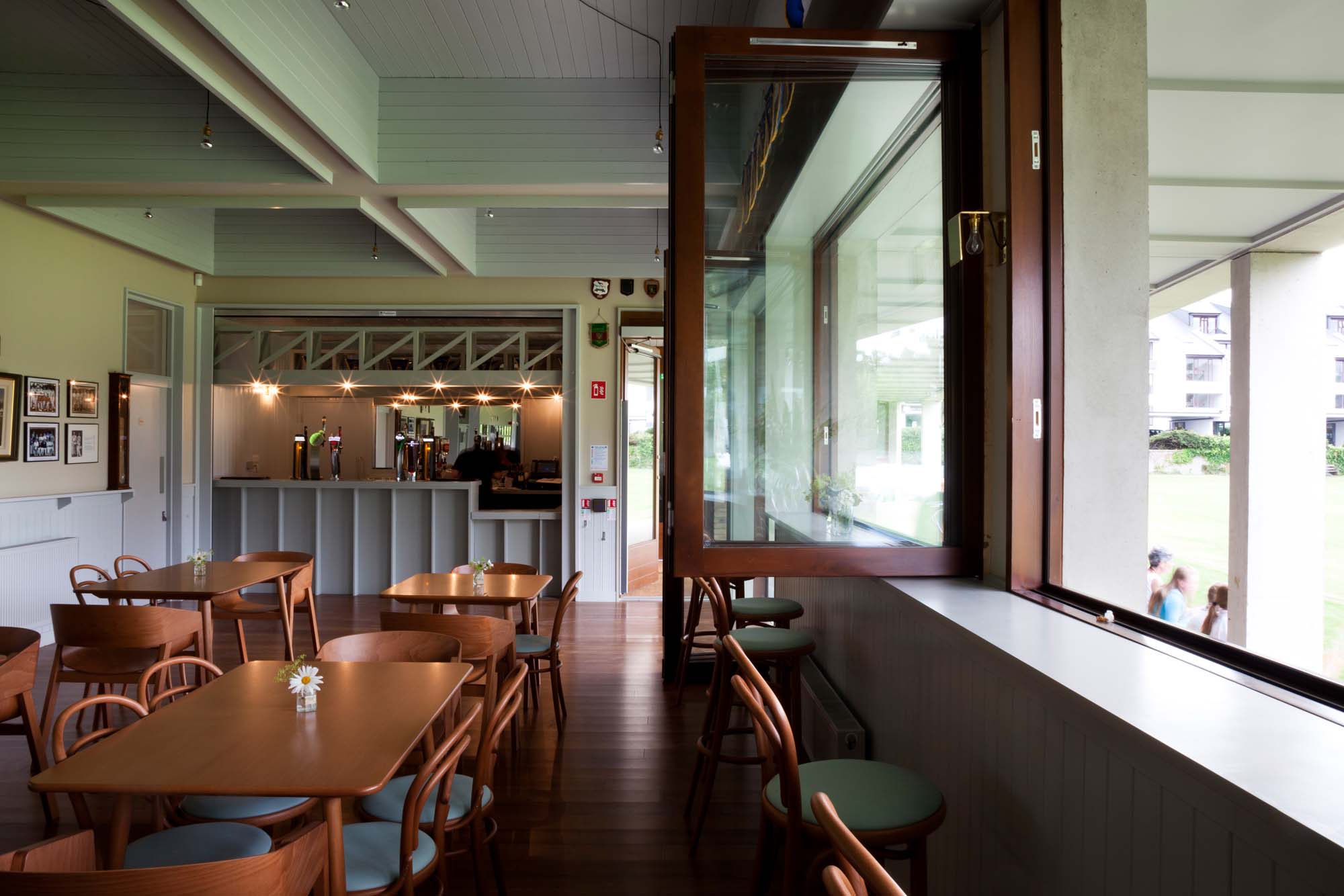 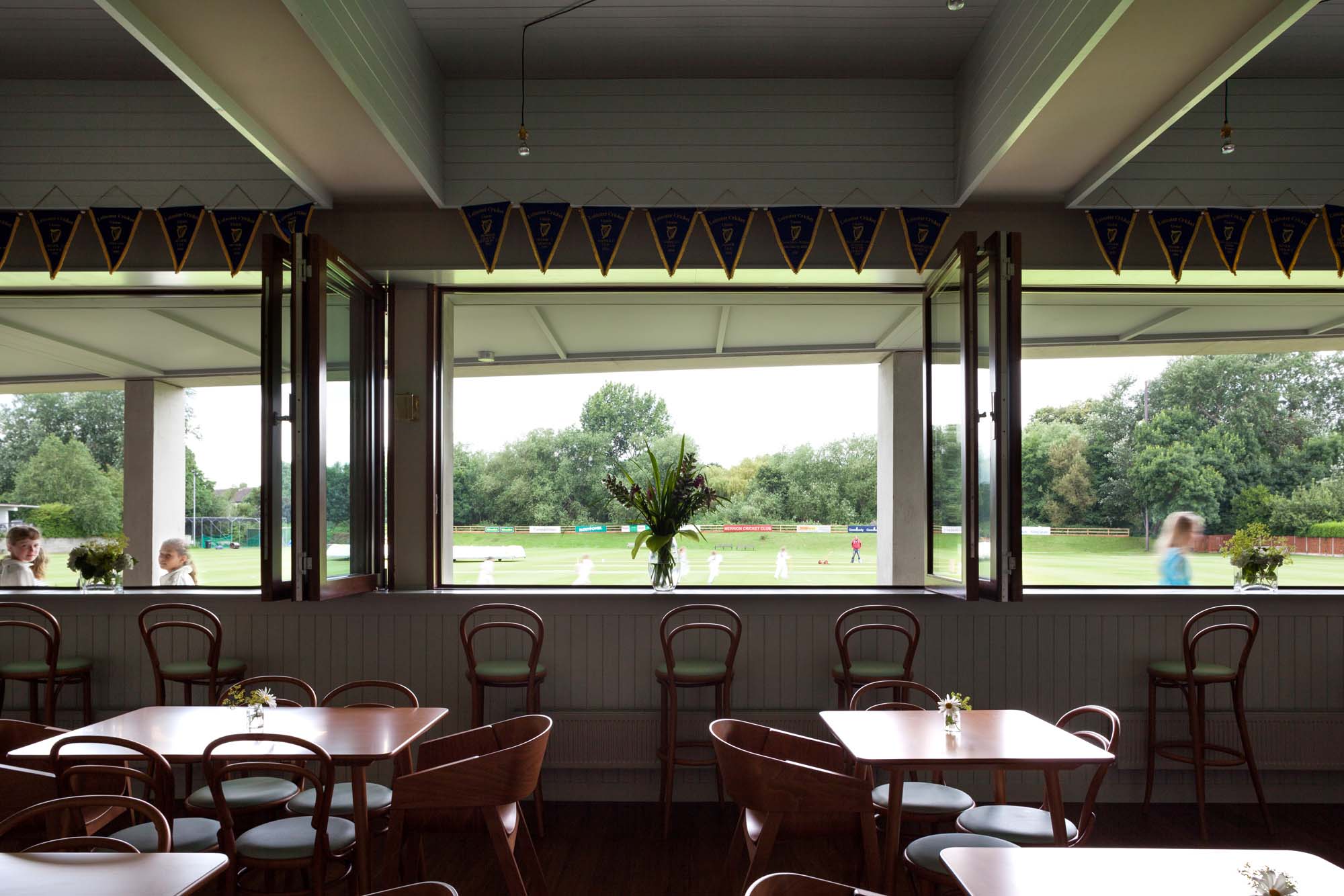 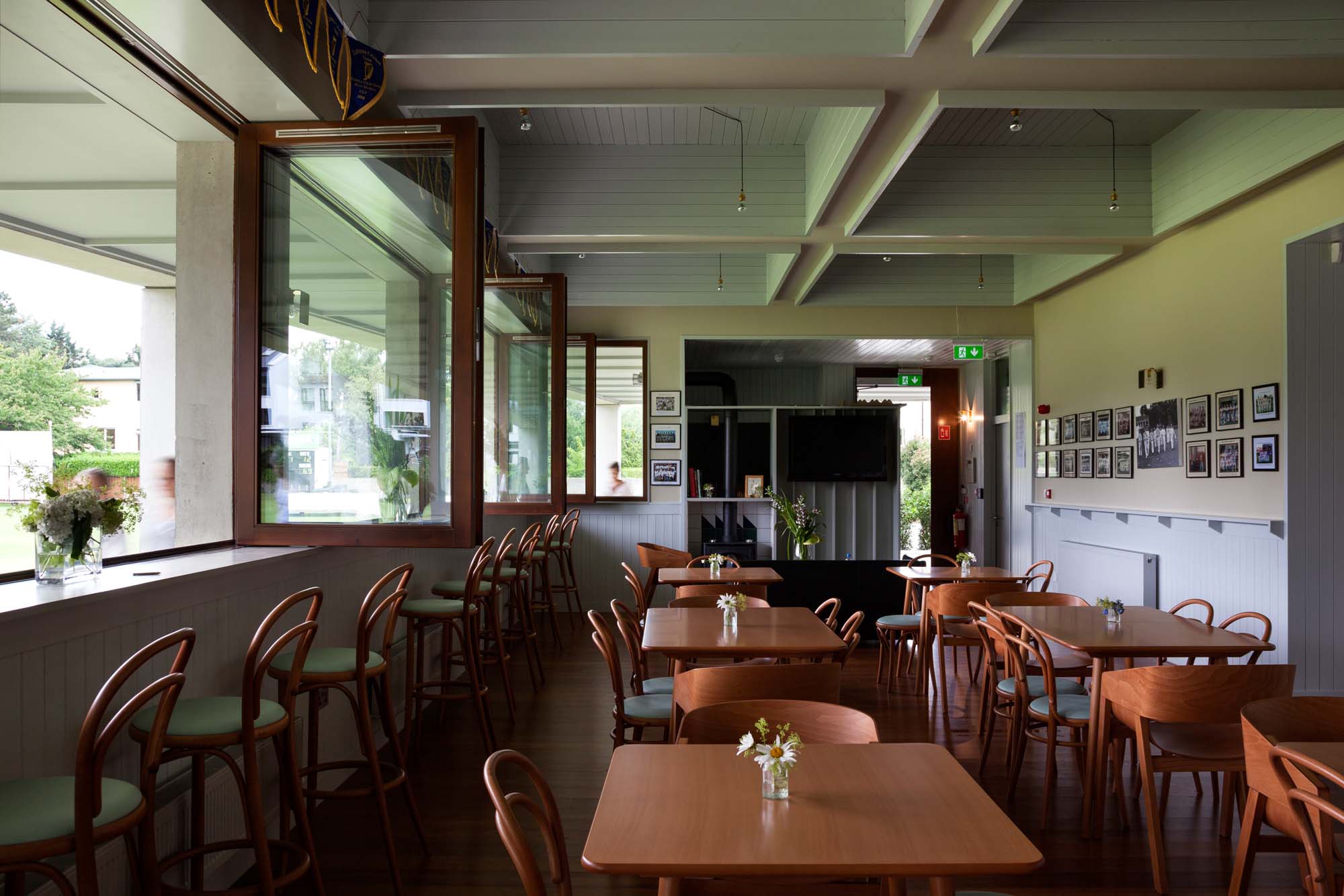 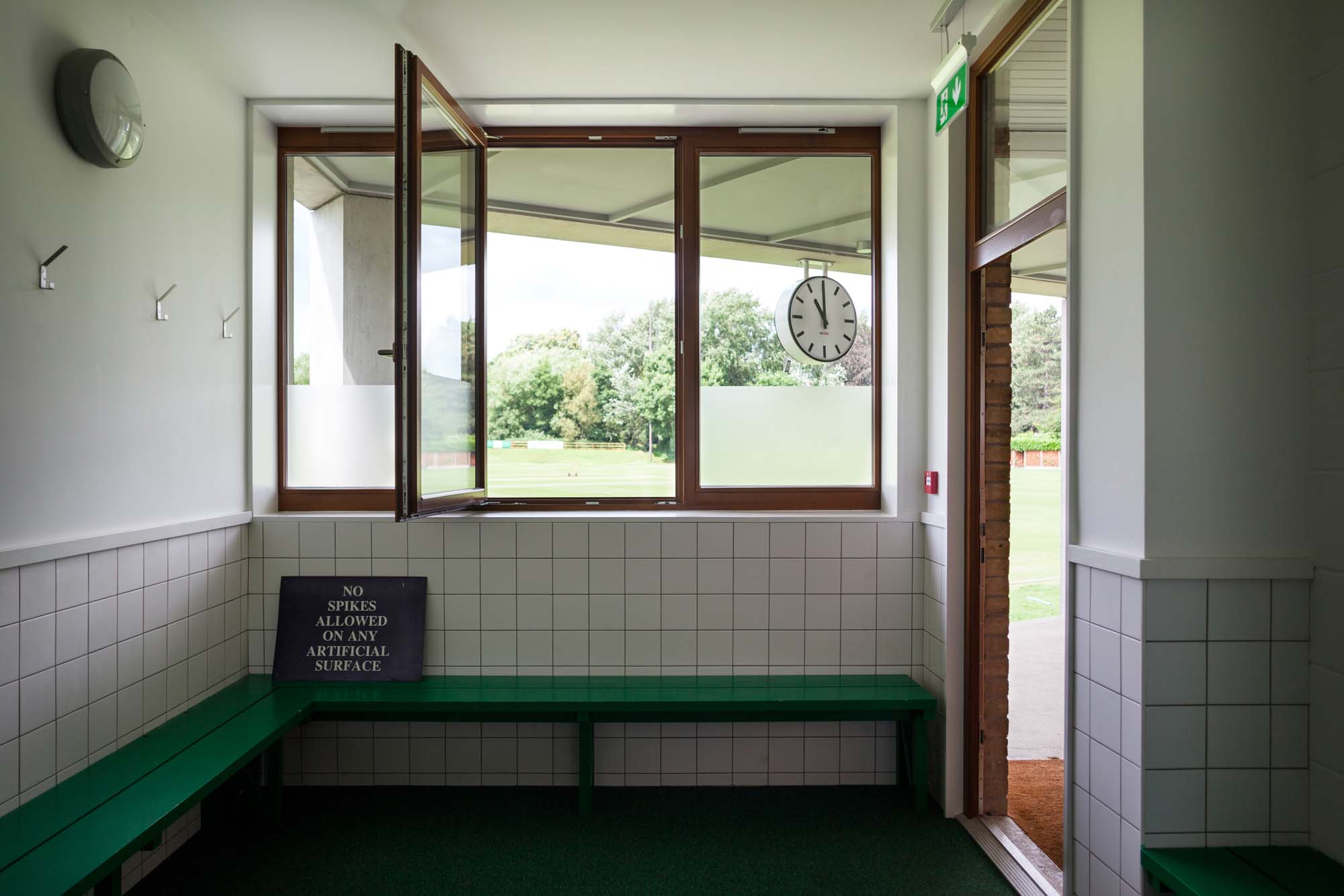 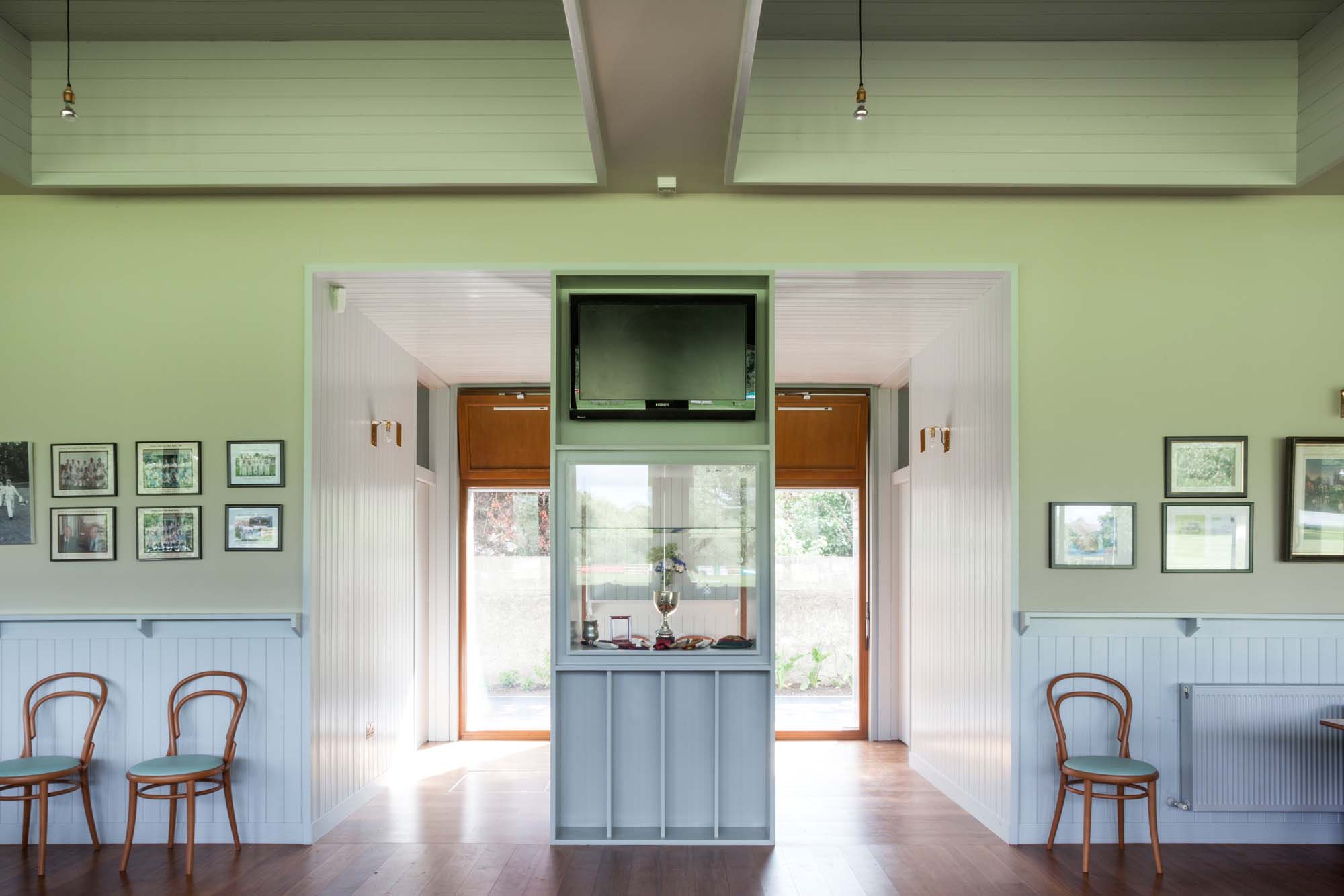 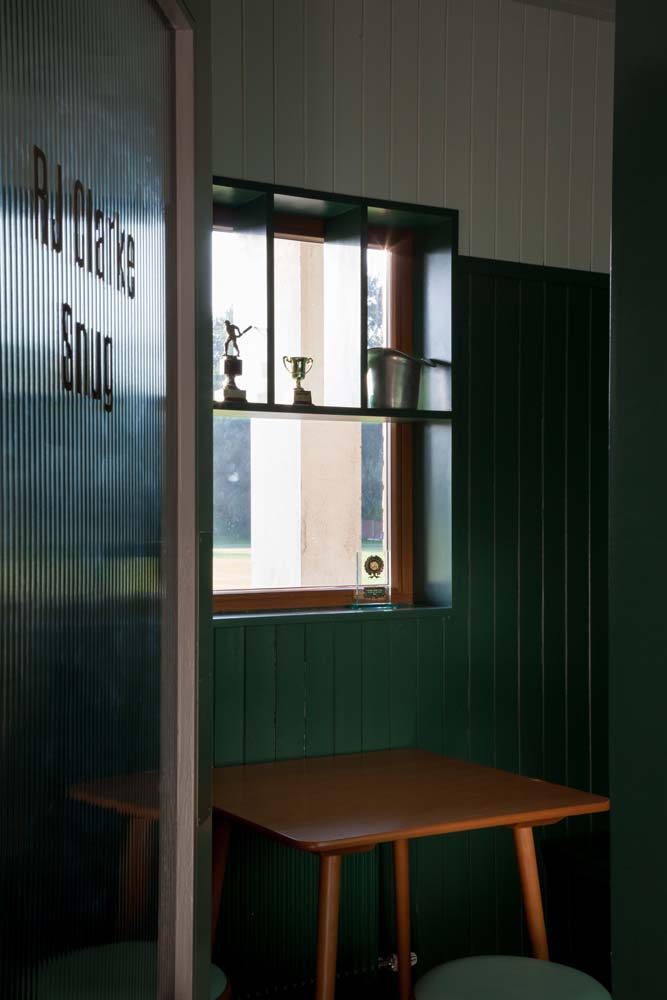 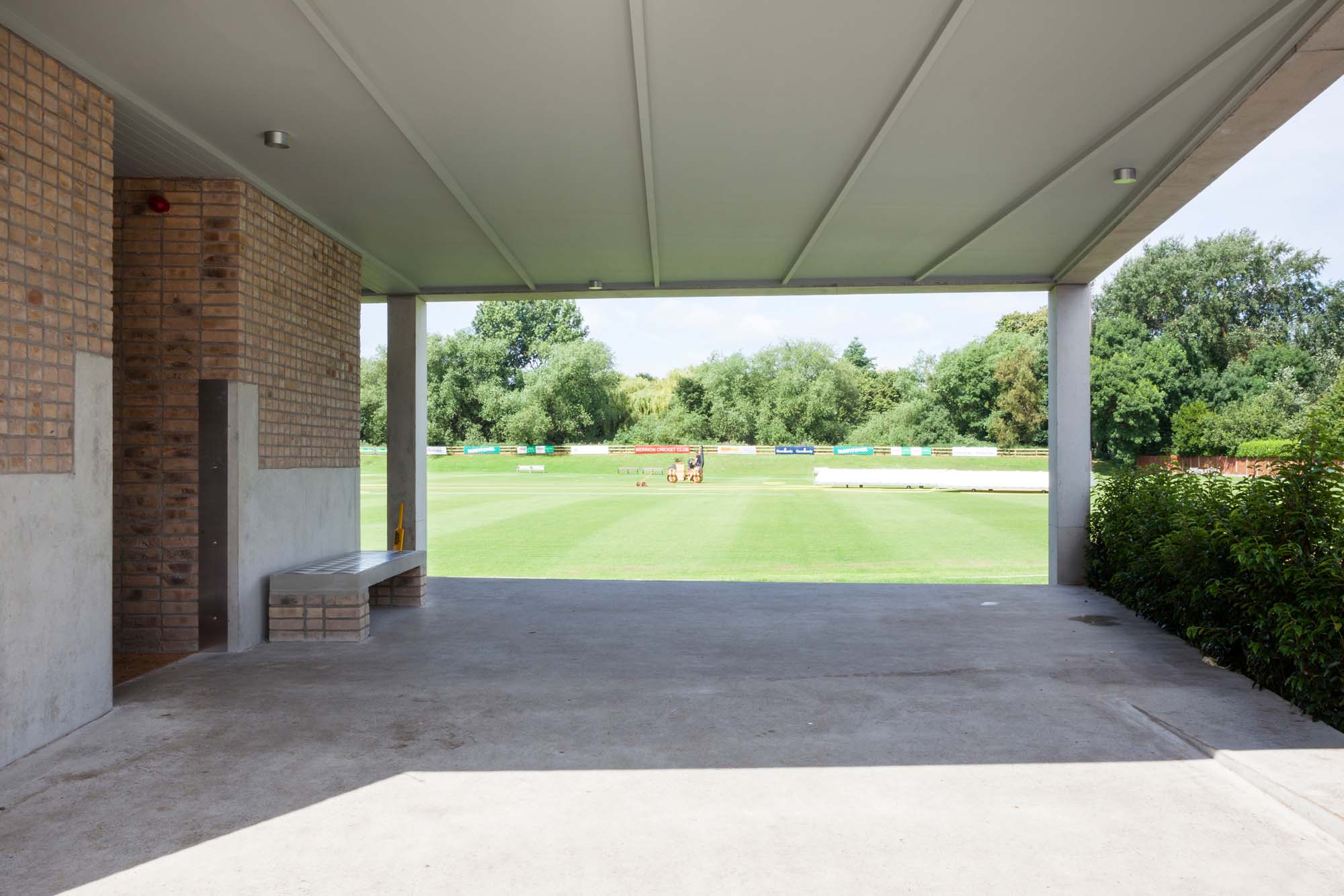 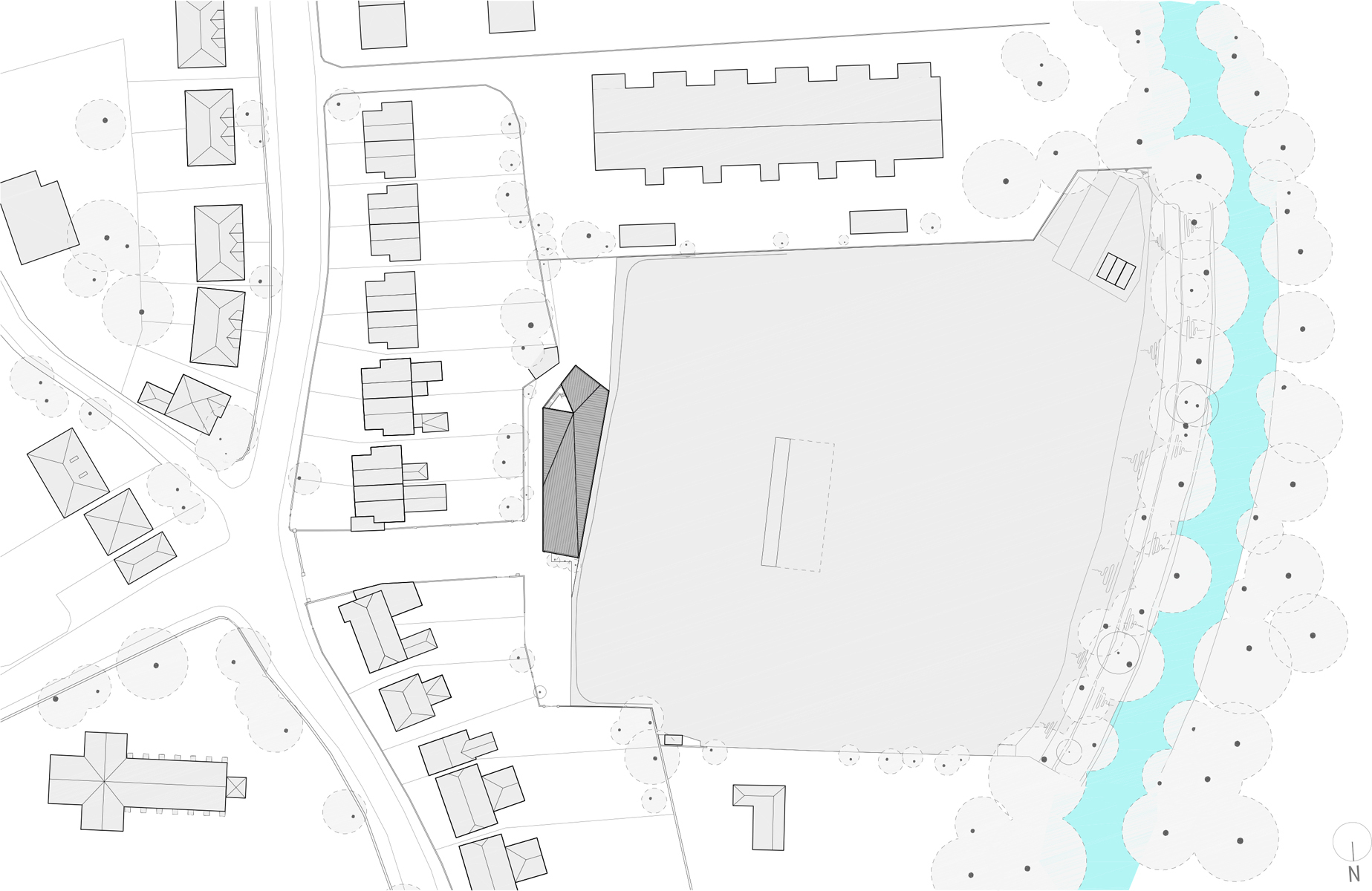 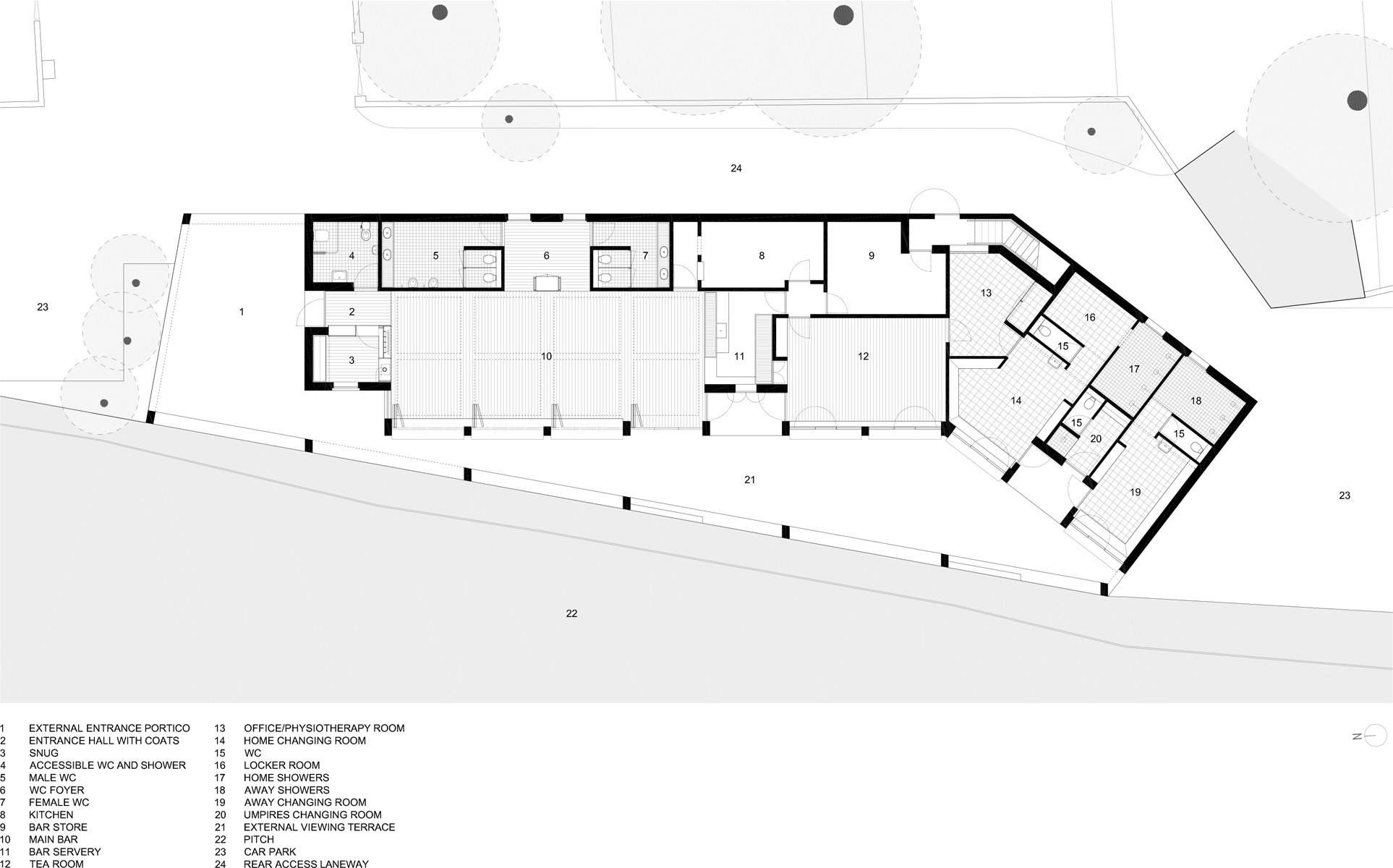 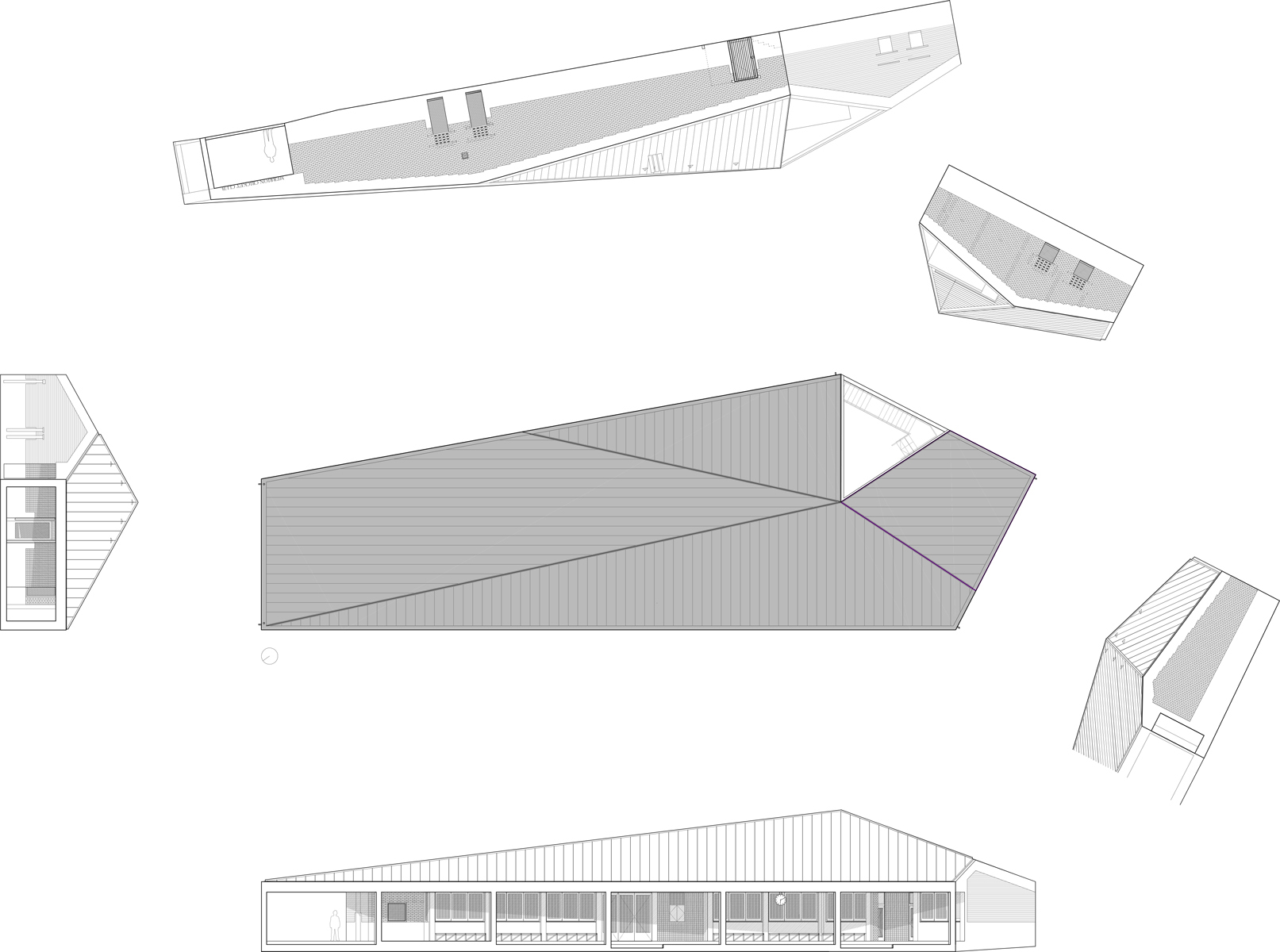