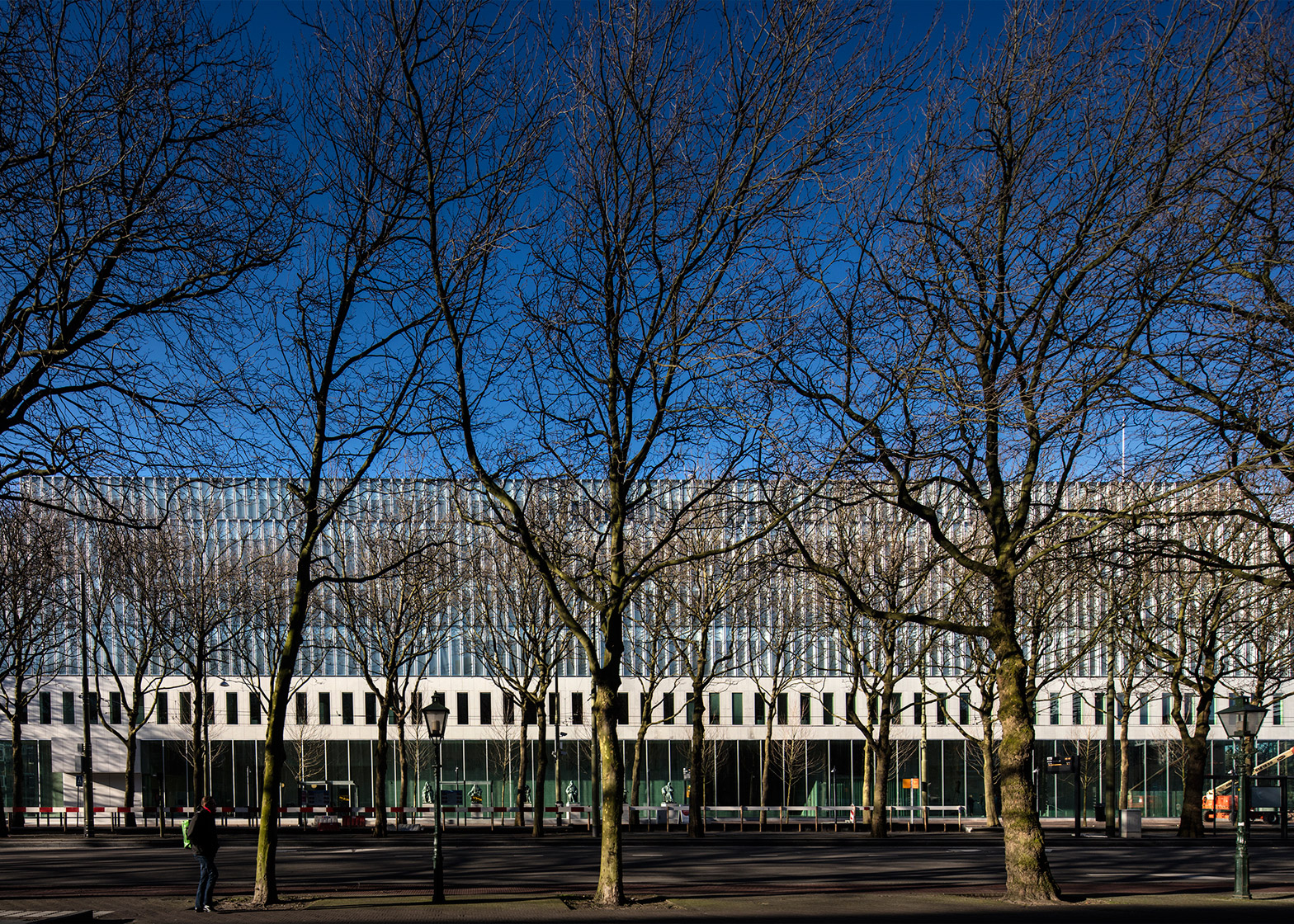 Six bronze statues mark the entrance to Kaan Architecten‘s new Supreme Court of the Netherlands, which features a facade of green glass louvres and an interior dominated by marble.

Set to open in The Hague later this month, the building houses one of the most important courts in the country, established in 1838 to provide exclusive final jurisdiction over the state’s civil and criminal matters. Kaan Architecten has accommodated this within a rectilinear seven-storey replacement for the previous building, combining materials that are traditionally seen as luxurious – stone, marble and oak – with an assortment of contemporary details and finishes. «The role of the court is to institutionalise justice,» explained studio co-founder and namesake Kees Kaan during a tour of the building. «We asked ourselves, is it possible for contemporary architecture to achieve this?»

One gesture towards this aim is the addition of the six statues, all of legal scholars, which were originally stationed outside the old Supreme Court. Before, they had lined up with doors, but now they indicate the position of the main 400-seat courtroom. Each statue is a pale green hue, as a result of the oxidised copper. Kaan matched this with the green glass louvres, which span the entire street-facing facade. «The statues in front of the building put the dot on the i,» Kaan told Dezeen. «The moment they were placed, the whole building changed.»

The Rotterdam-based firm originally won a competition to design the courthouse, although the brief didn’t leave much room for imagination. The exact size of the structure was already set, even the set-back on the upper level. The most important decision involved the layout of the interior programme. Kaan’s approach was to situate all of the public spaces on the ground floor, then create three separate blocks upstairs for the different offices. The Council’s office is at one end and the Prosecutor General’s office is at the other, leaving space in the middle for both the court president and communal facilities, including the restaurant and the library. «Basically, the building is like a box with other boxes inside,» added Kaan.

Marble finishes was used throughout the interior. In both the main courtroom and the smaller 80-seat court, brown-veined onyx-marble – also known as alabaster – provides a translucent backdrop. Other types of marble were applied to each of the offices: a vertically striped Marmara Equator for the council, and a more simple Skyline marble for the Prosecutor General. Both of these spaces are arranged around atriums. The marble forms floors, walls and balustrades, which Kaan designed to be «low and wide, rather than long and thin» to make the spaces feel as open as possible. The team previously trialled these types of balustrades in the Erasmus Medical Center in Rotterdam, and Kaan is keen to add them to future buildings too. The double-height entrance hall is framed by pale grey limestone with a matt finish, described by the design team as a «velvety texture». This space also features a new artwork by Dutch painter Helen Verhoeven. The library is a two-level space, with windows in the corners and a map covering one wall, while the restaurant features oak flooring and joinery.

The Supreme Court of the Netherlands officially opens on 23 April. 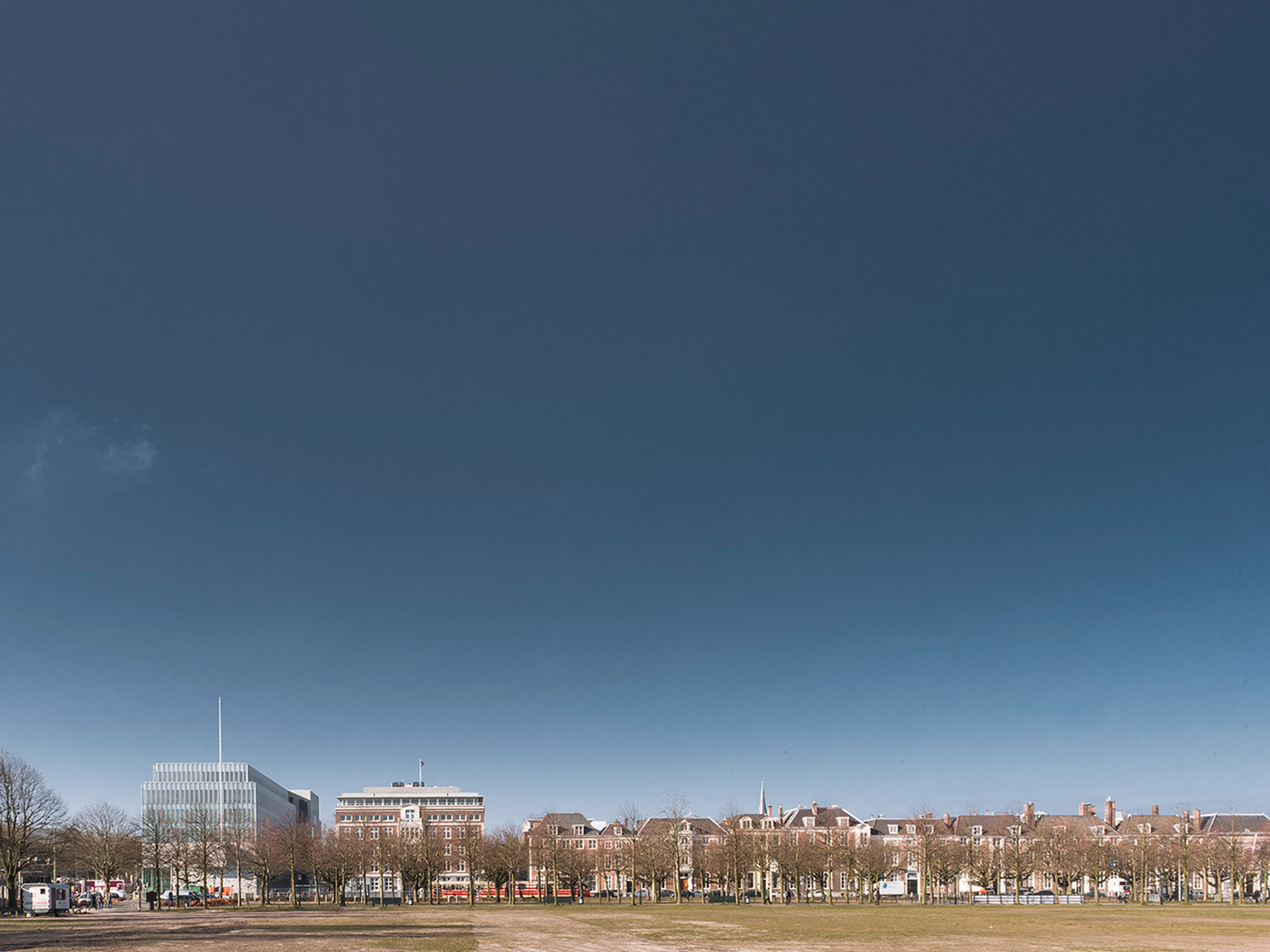 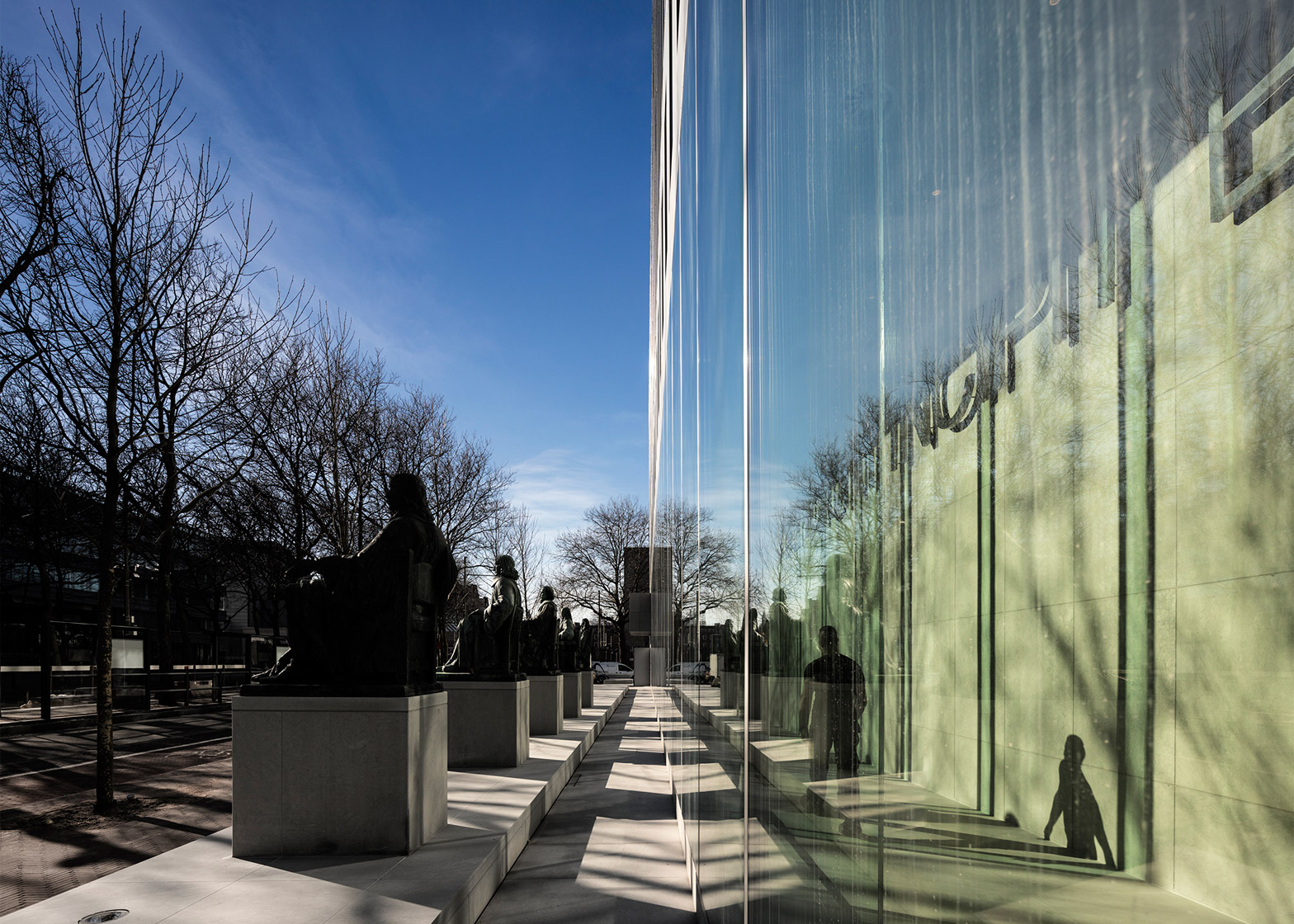 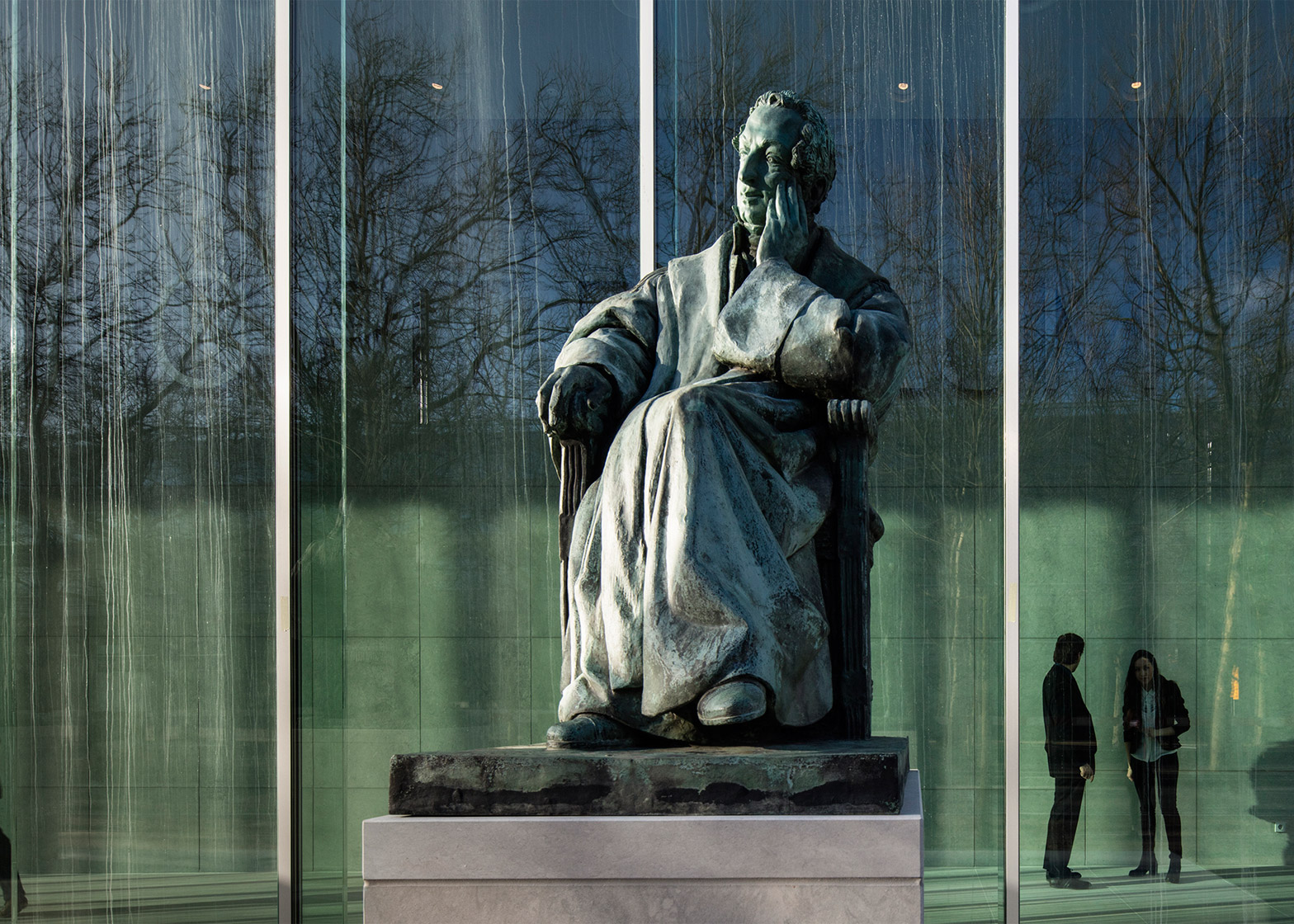 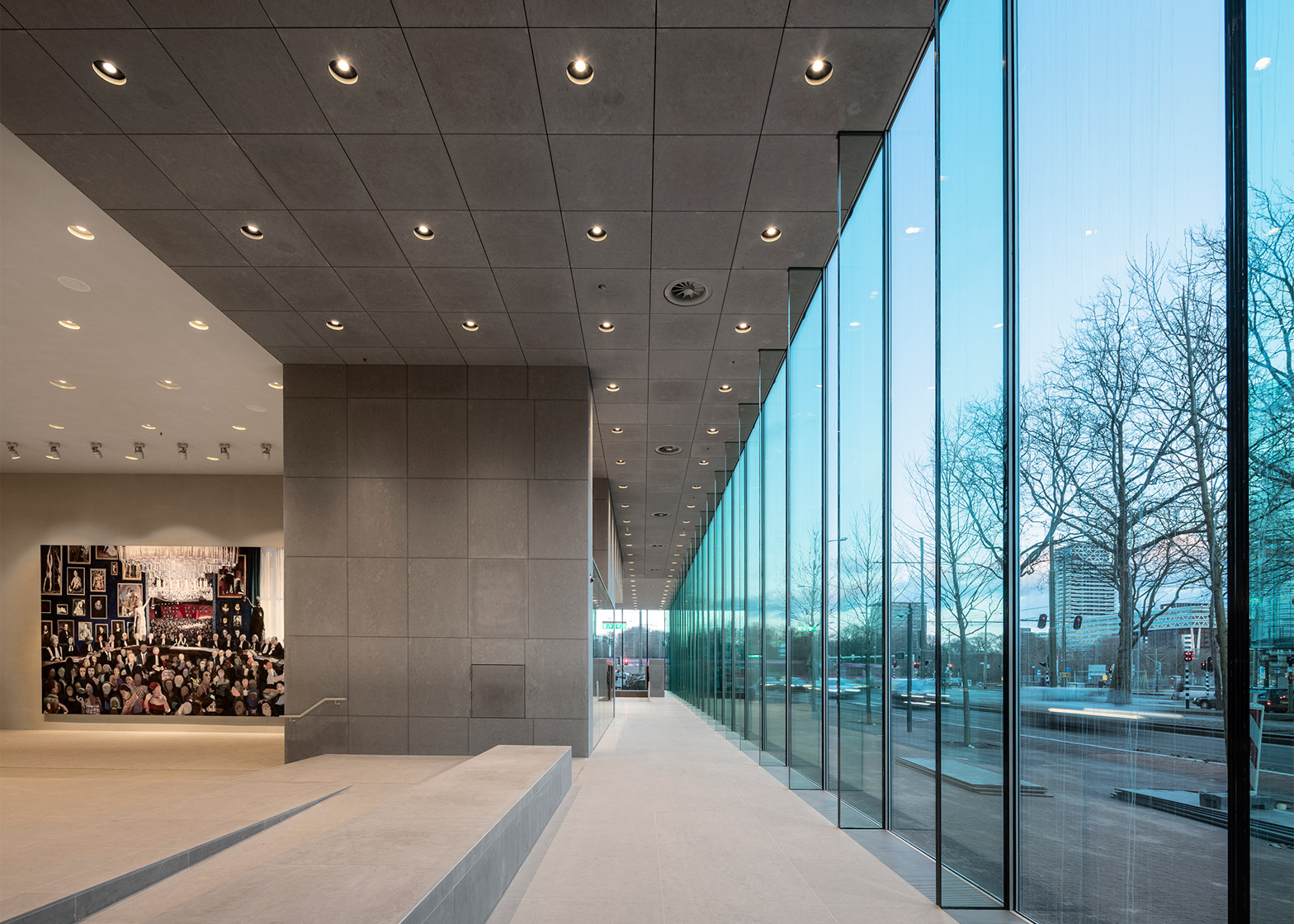 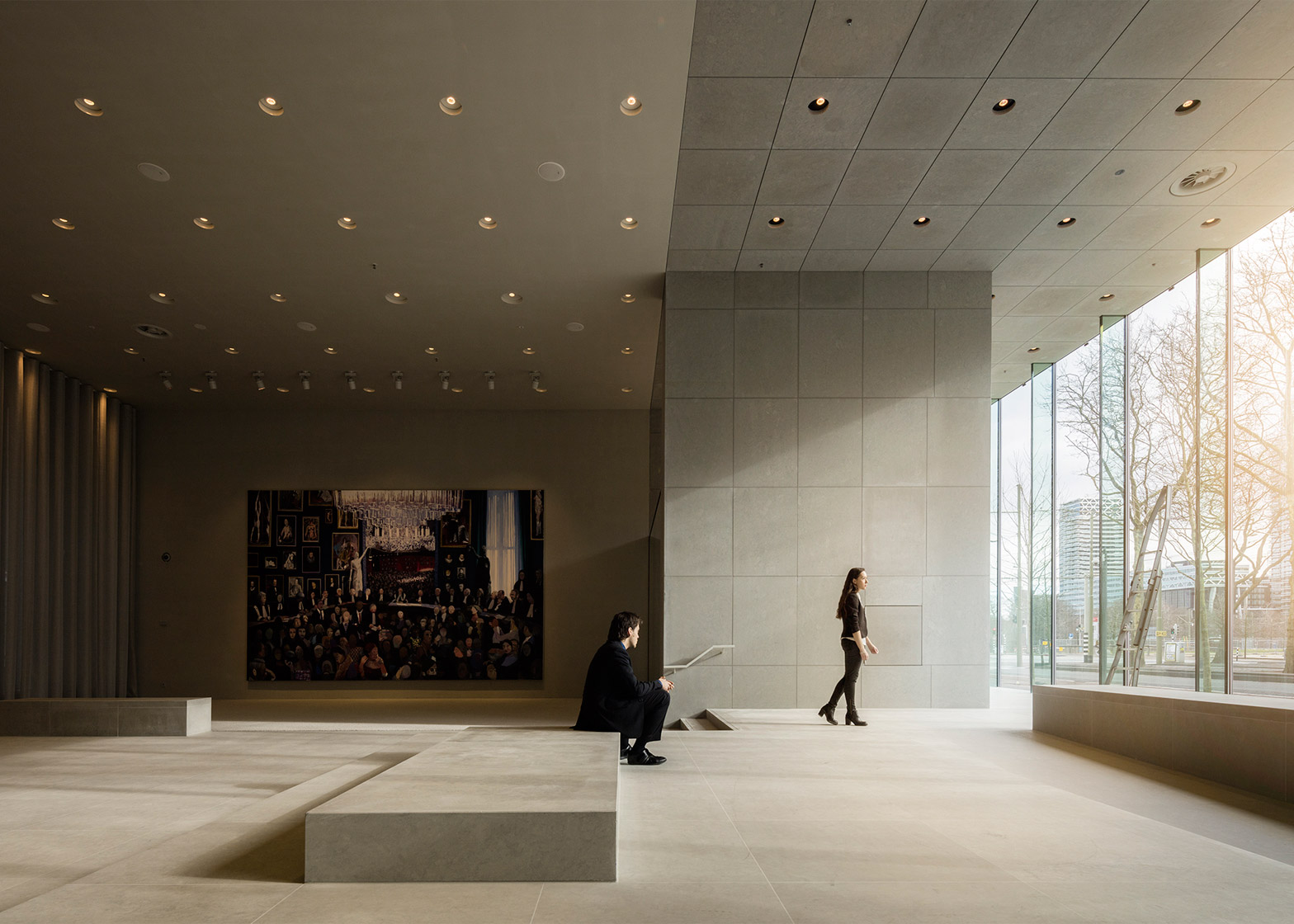 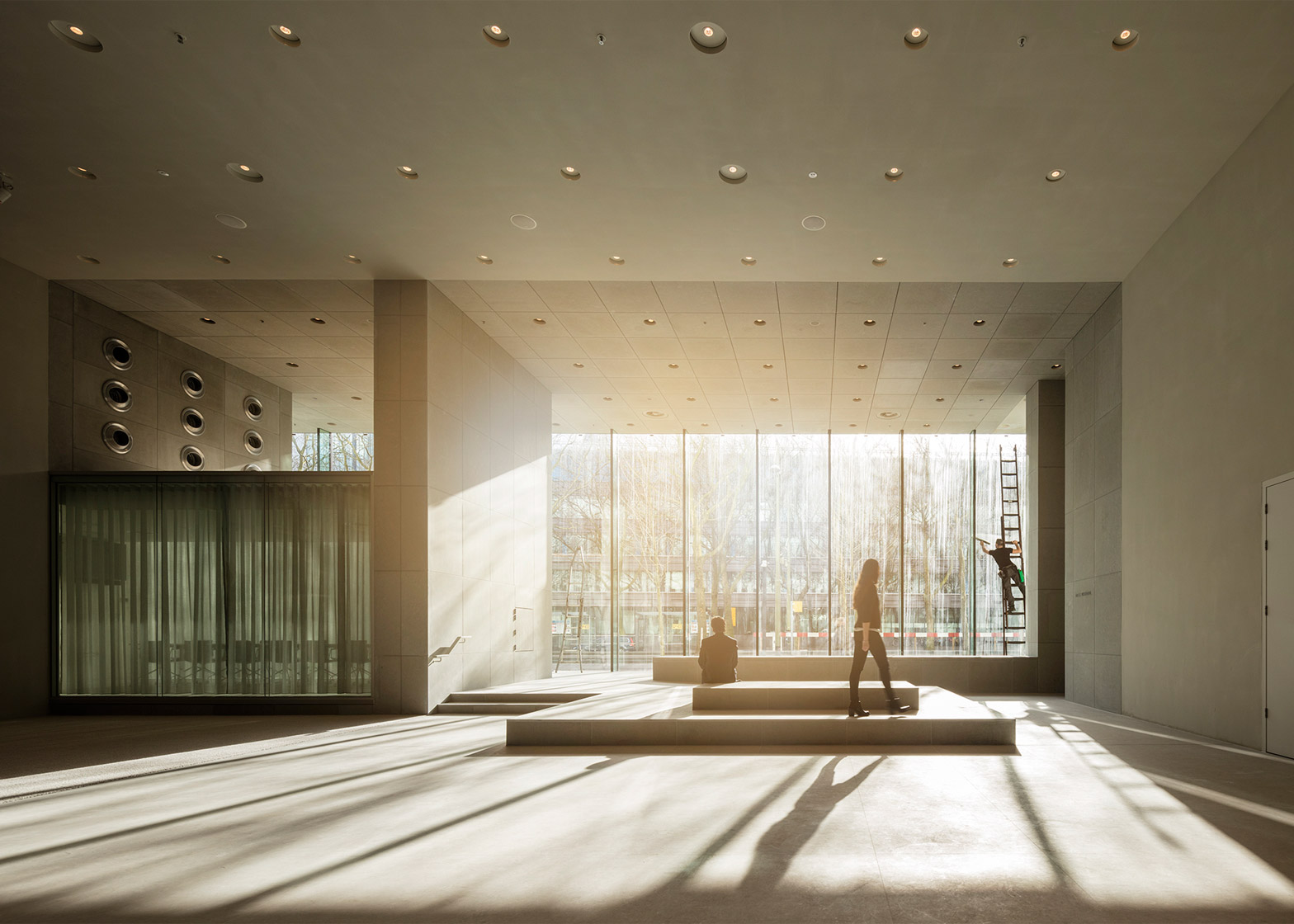 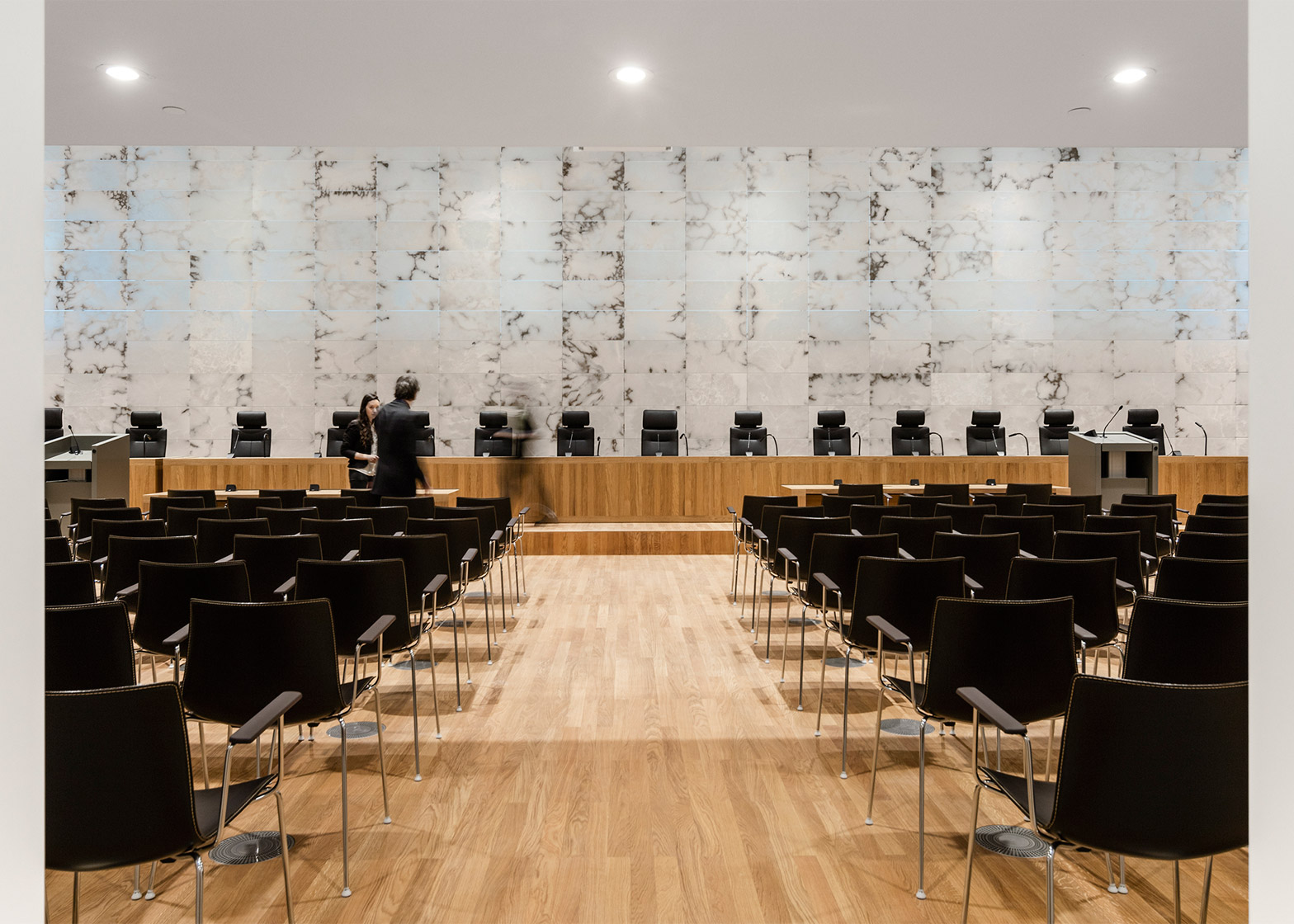 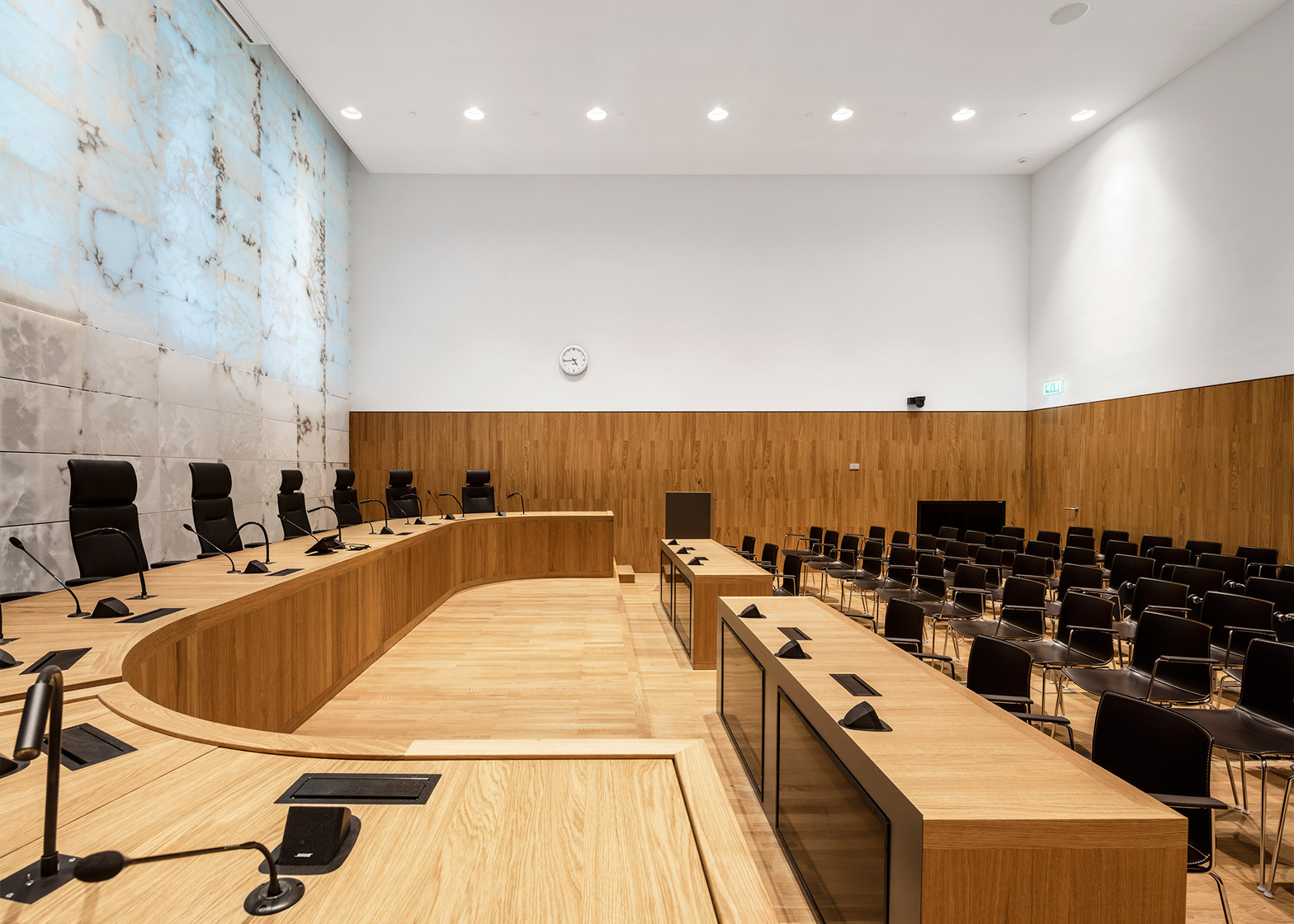 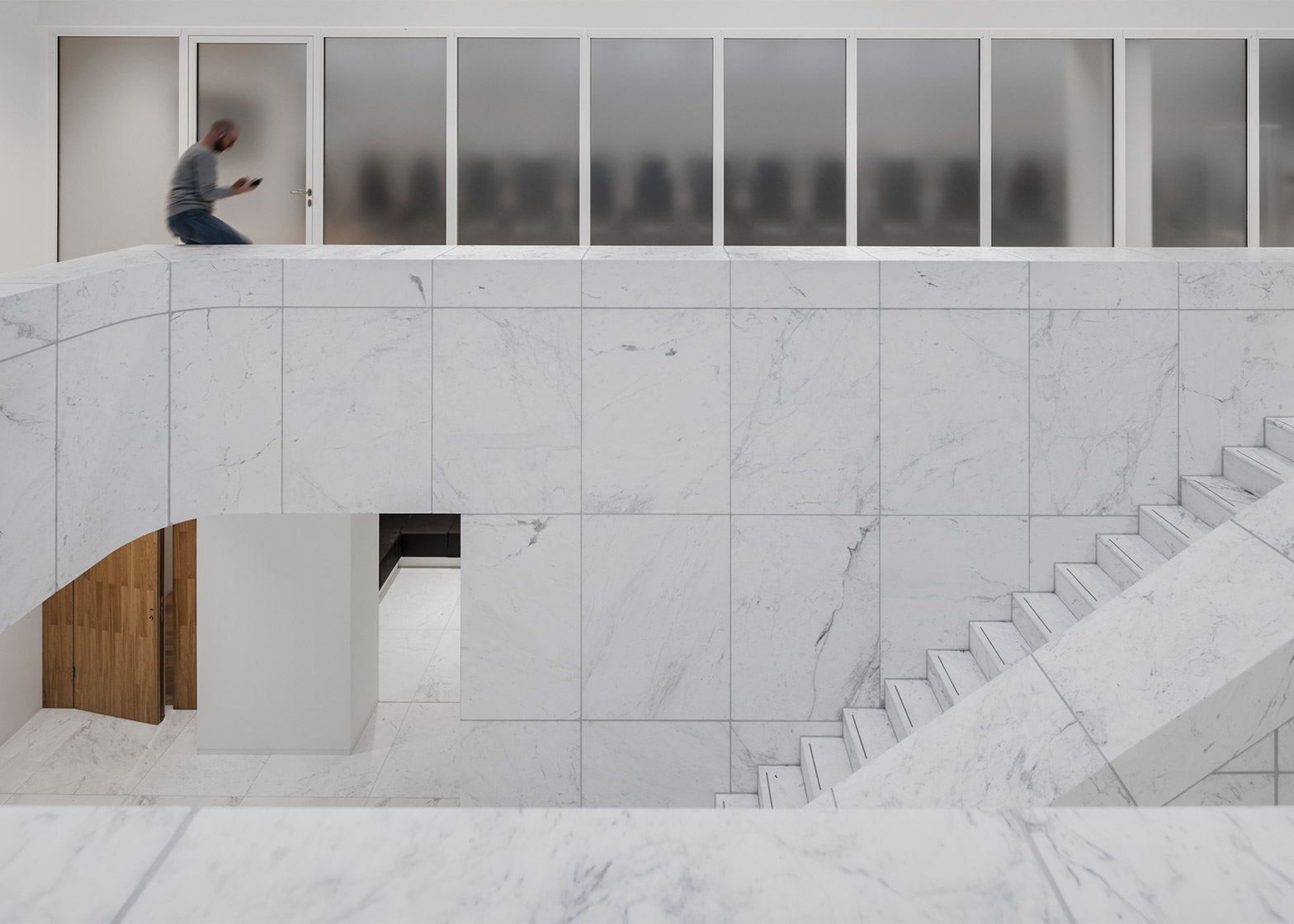 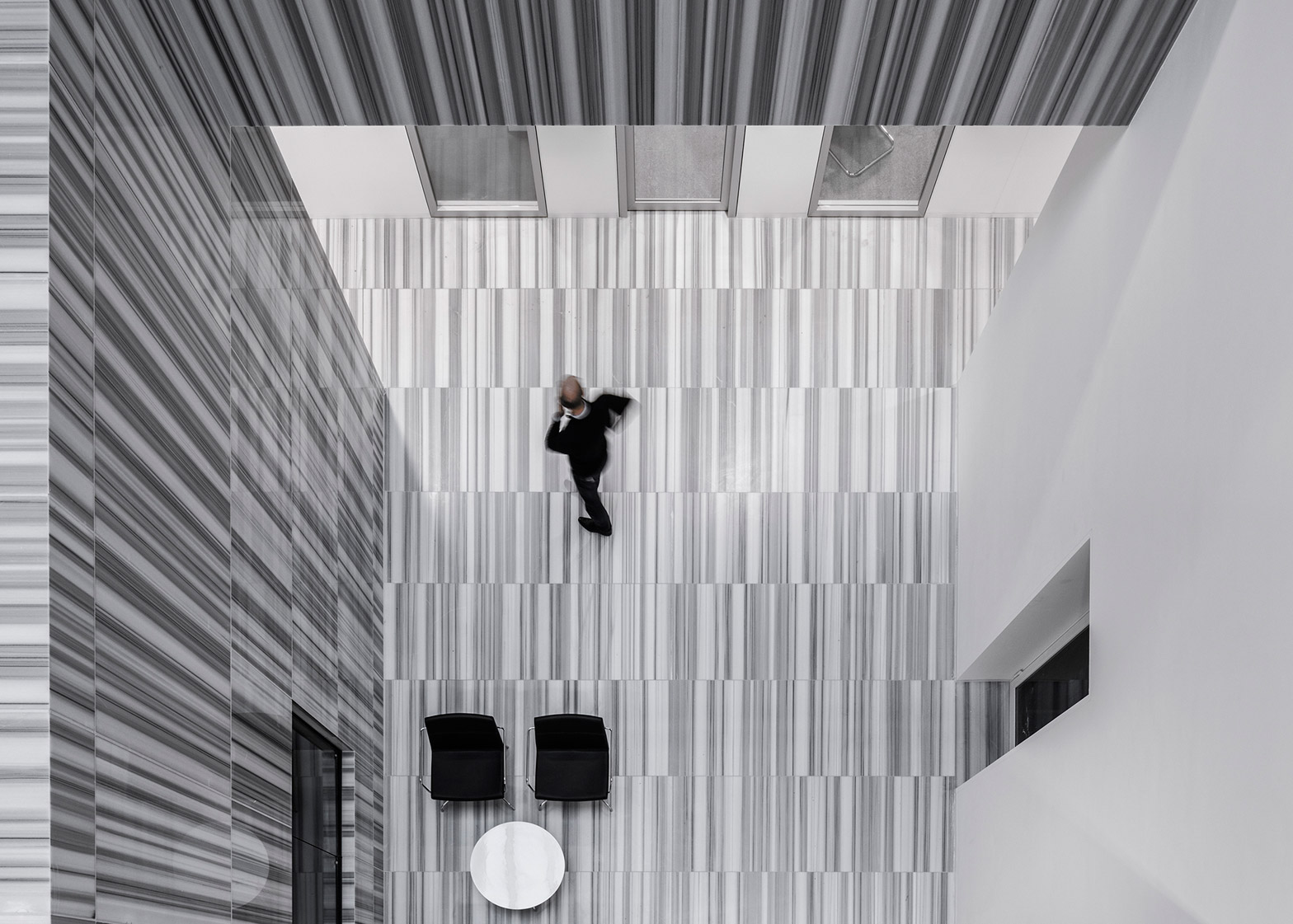 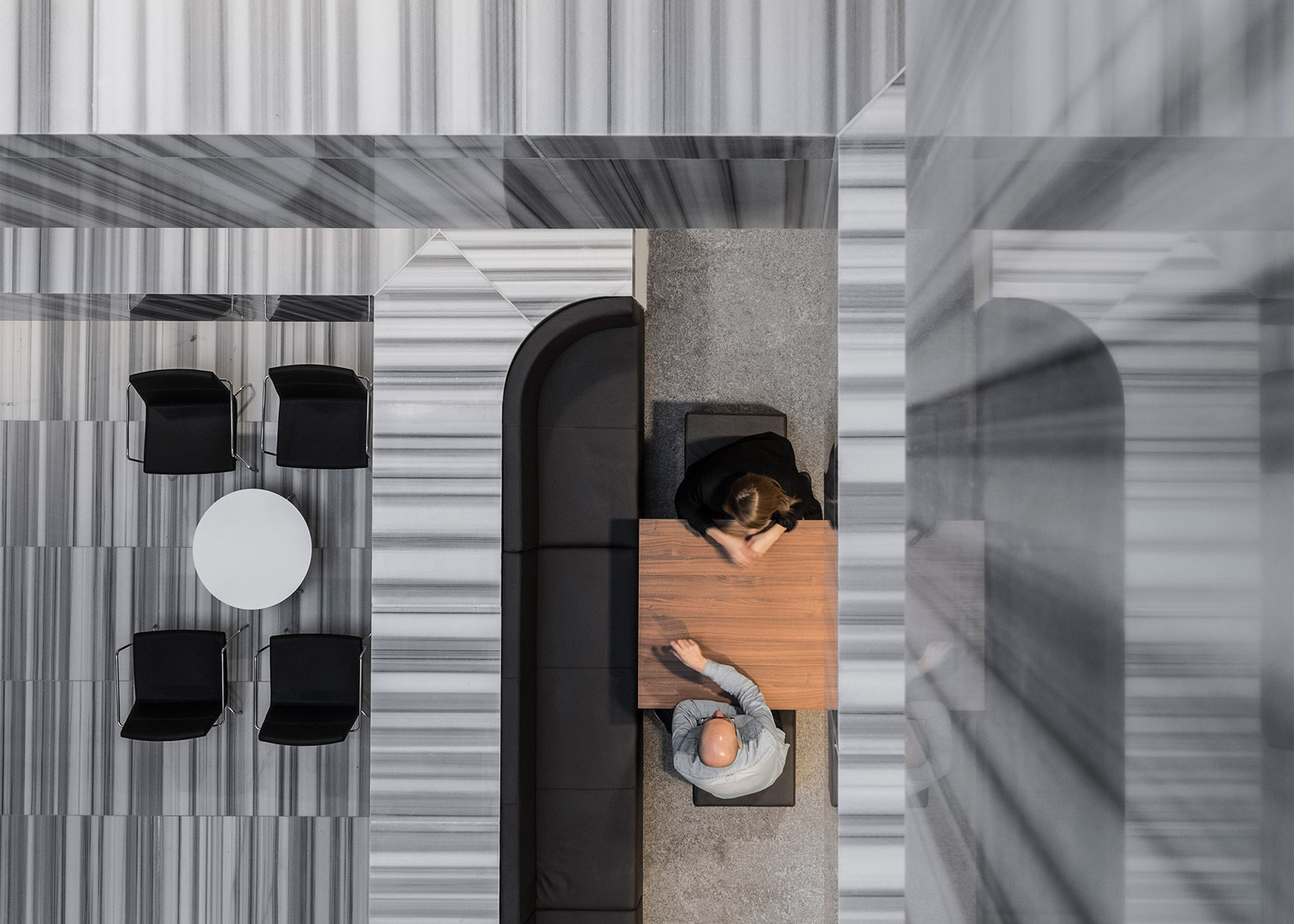 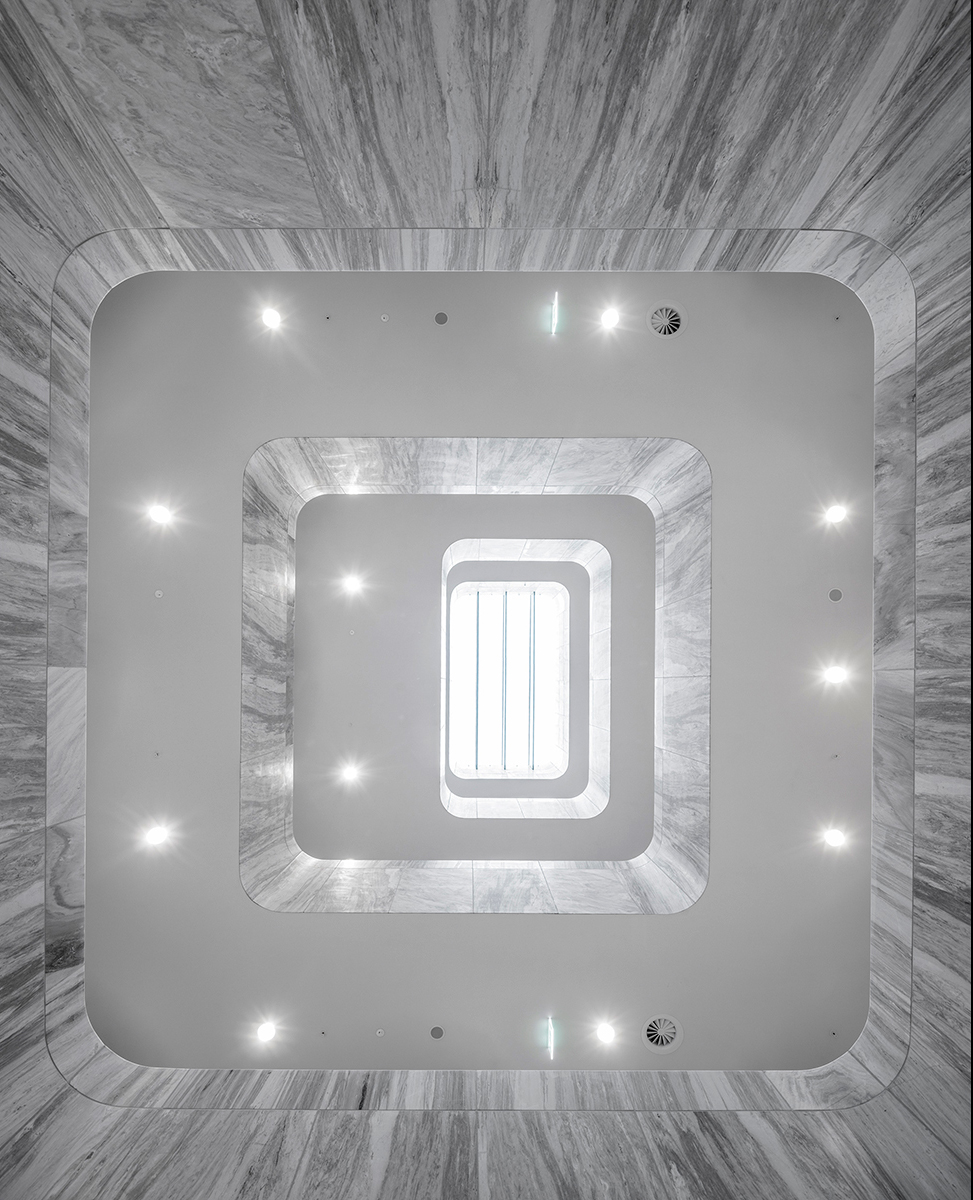 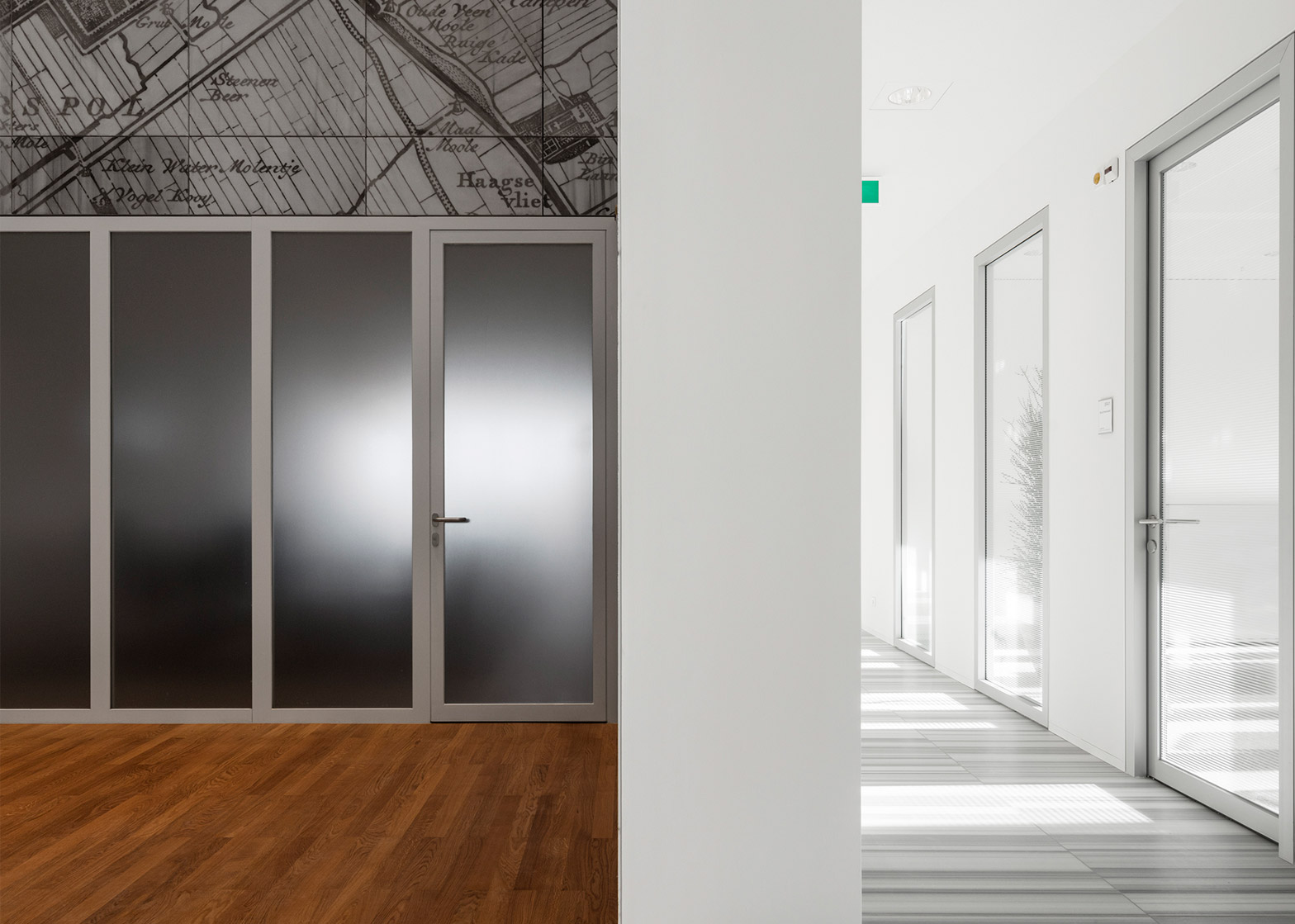 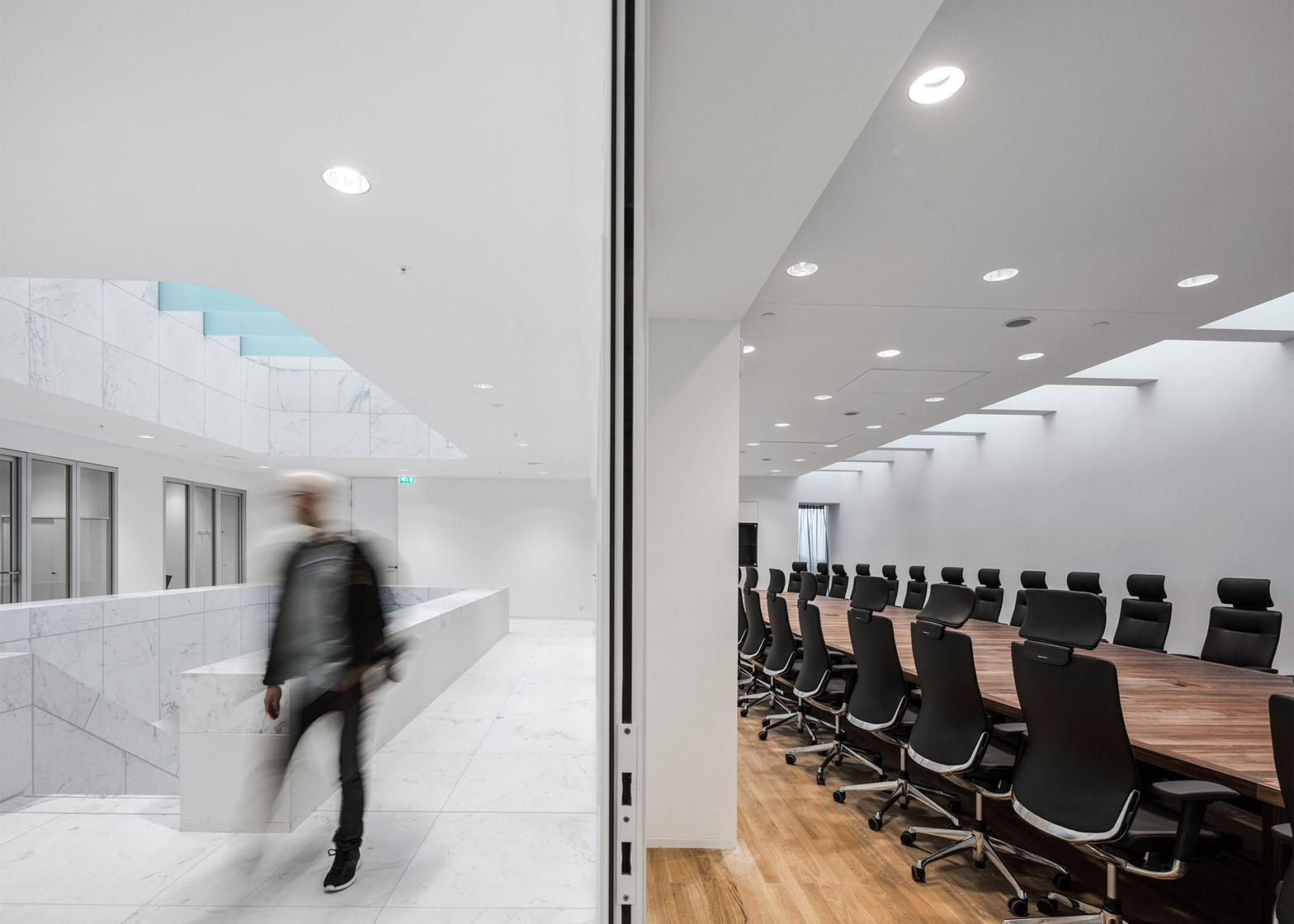 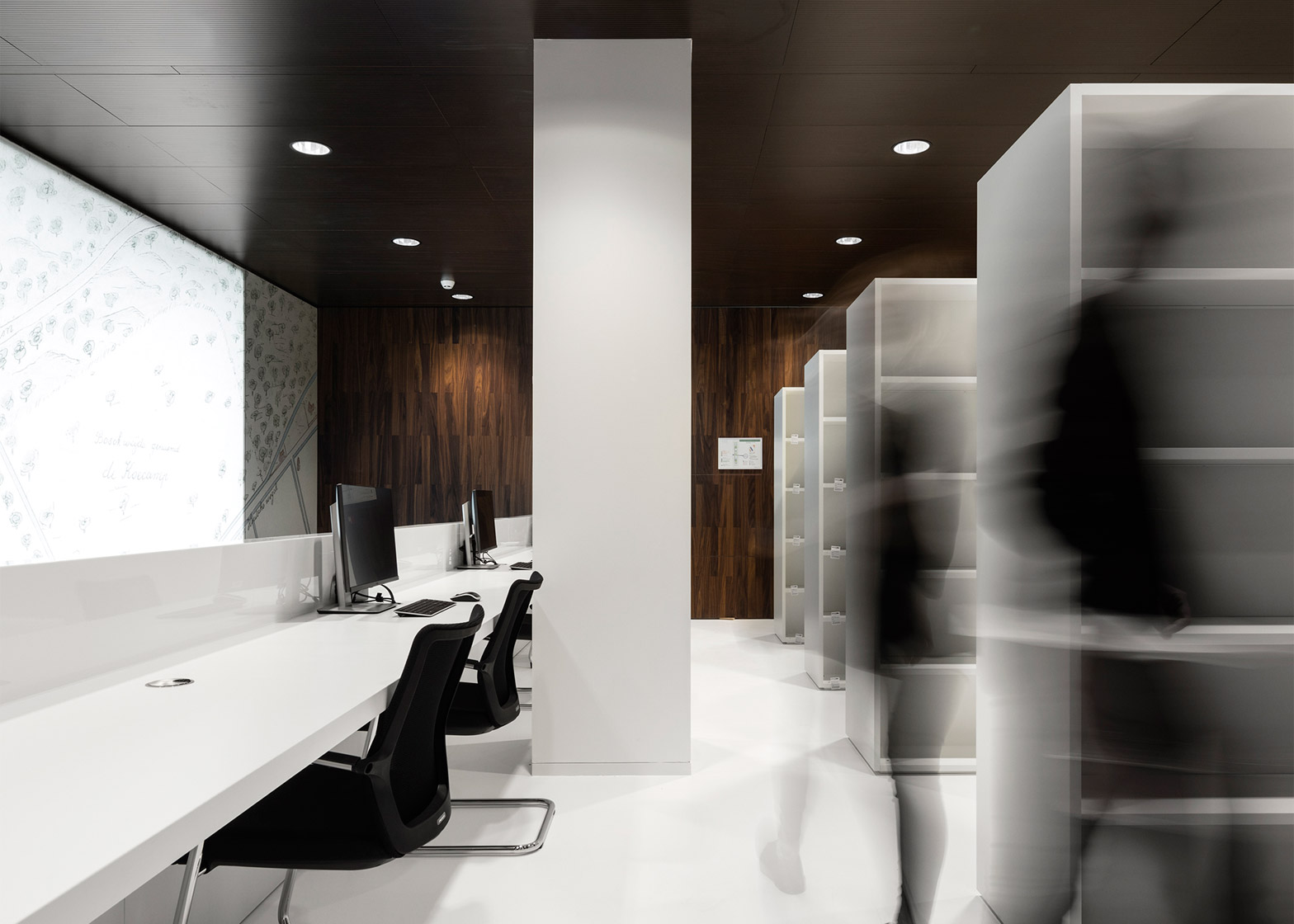 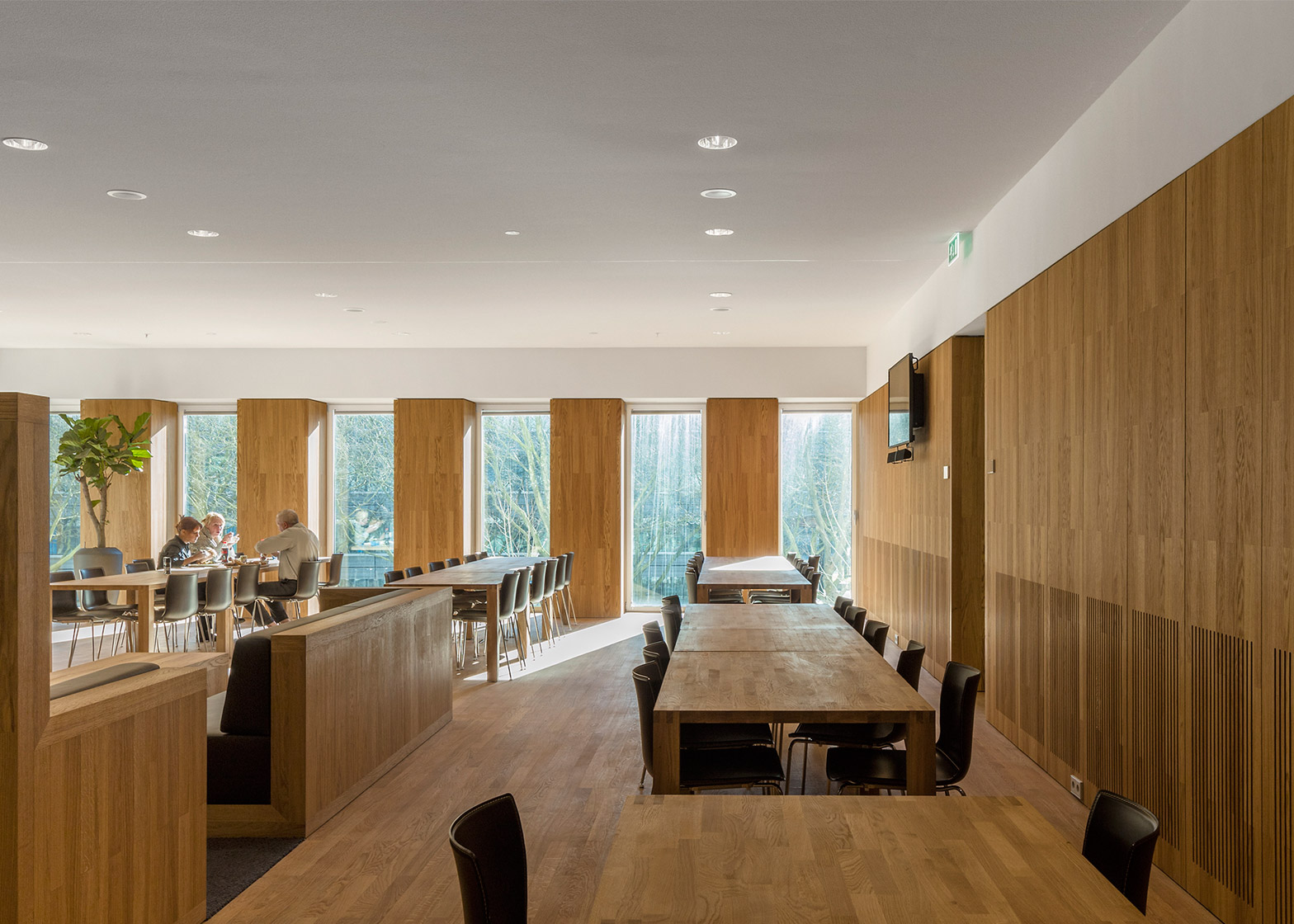 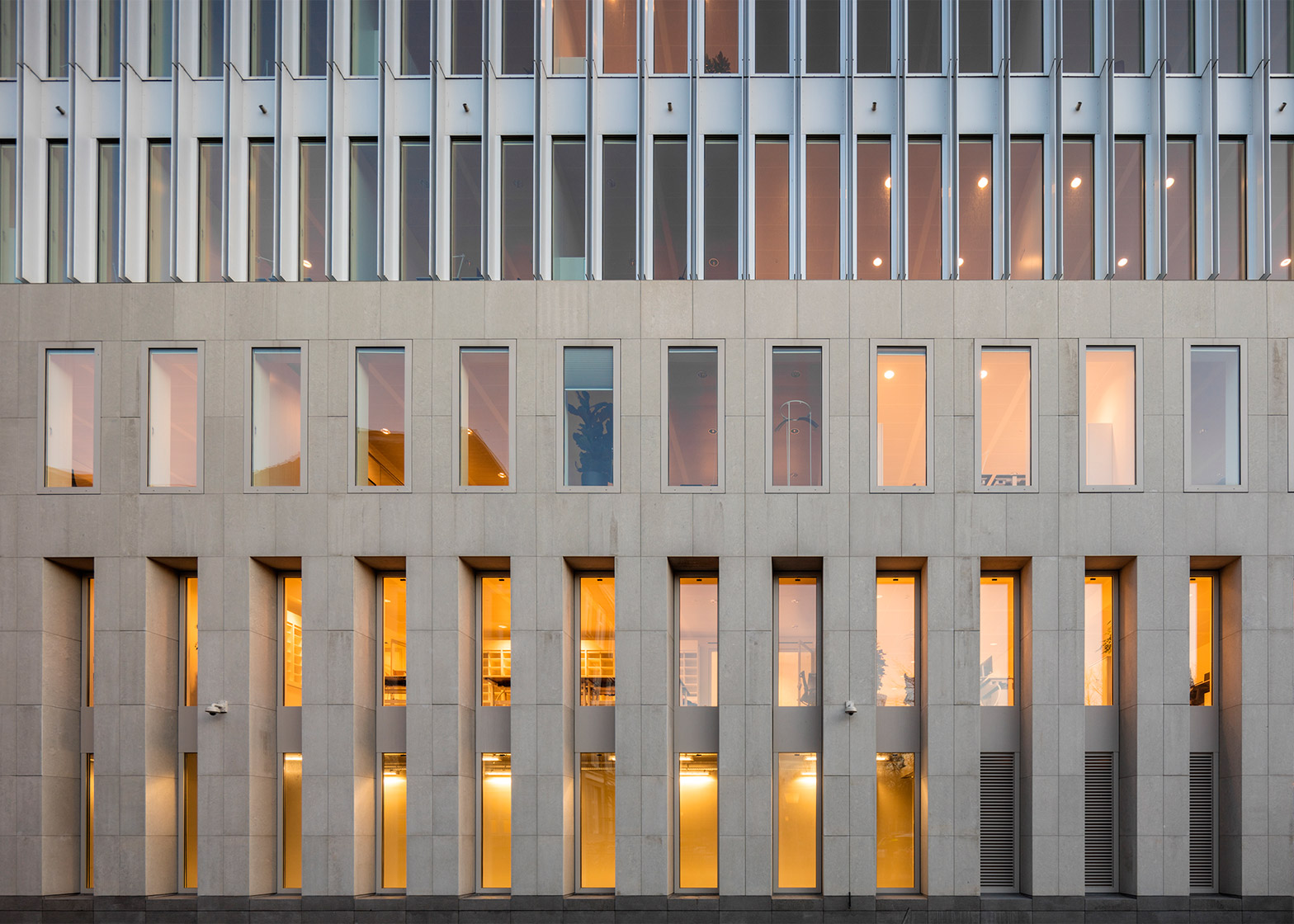 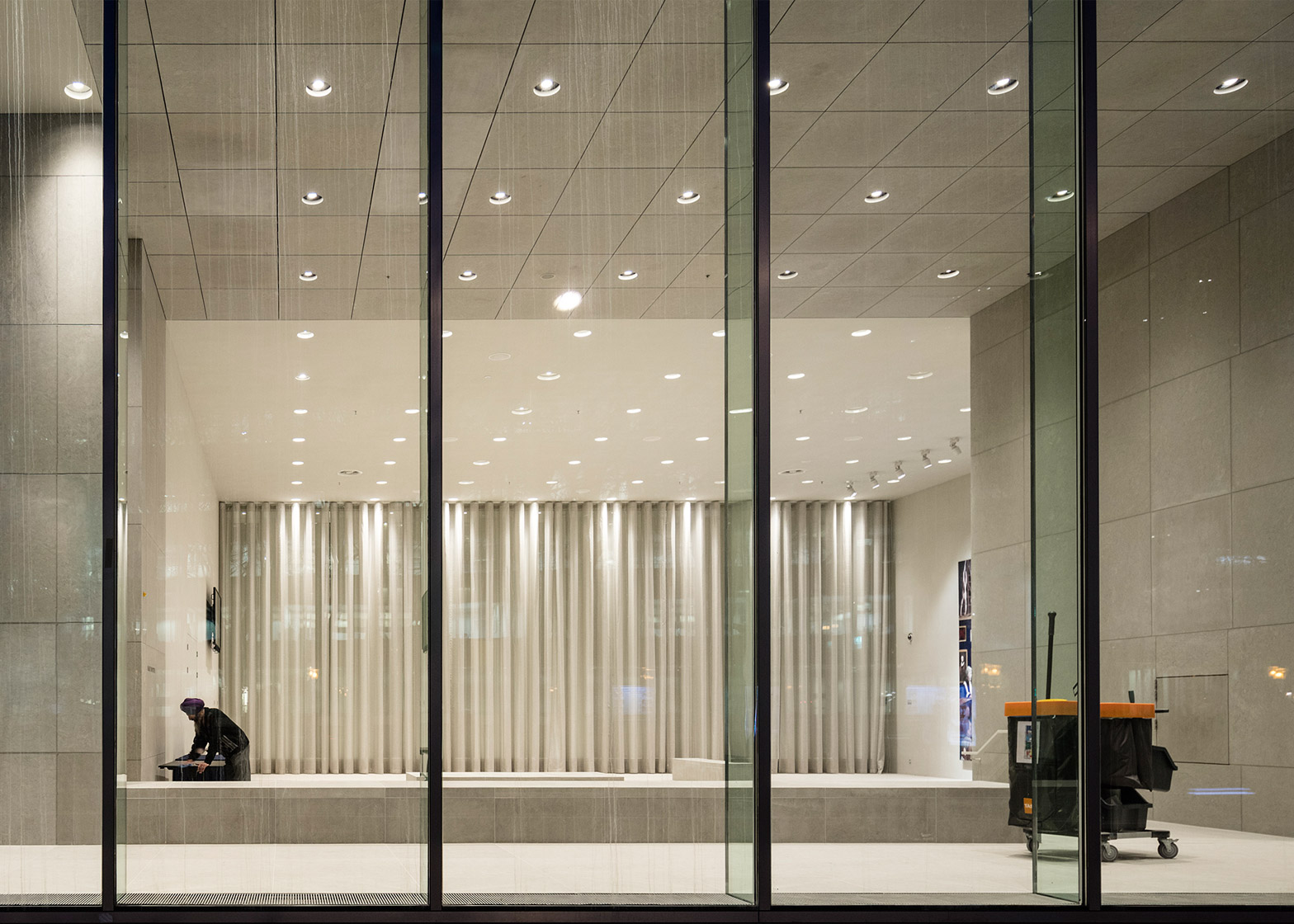 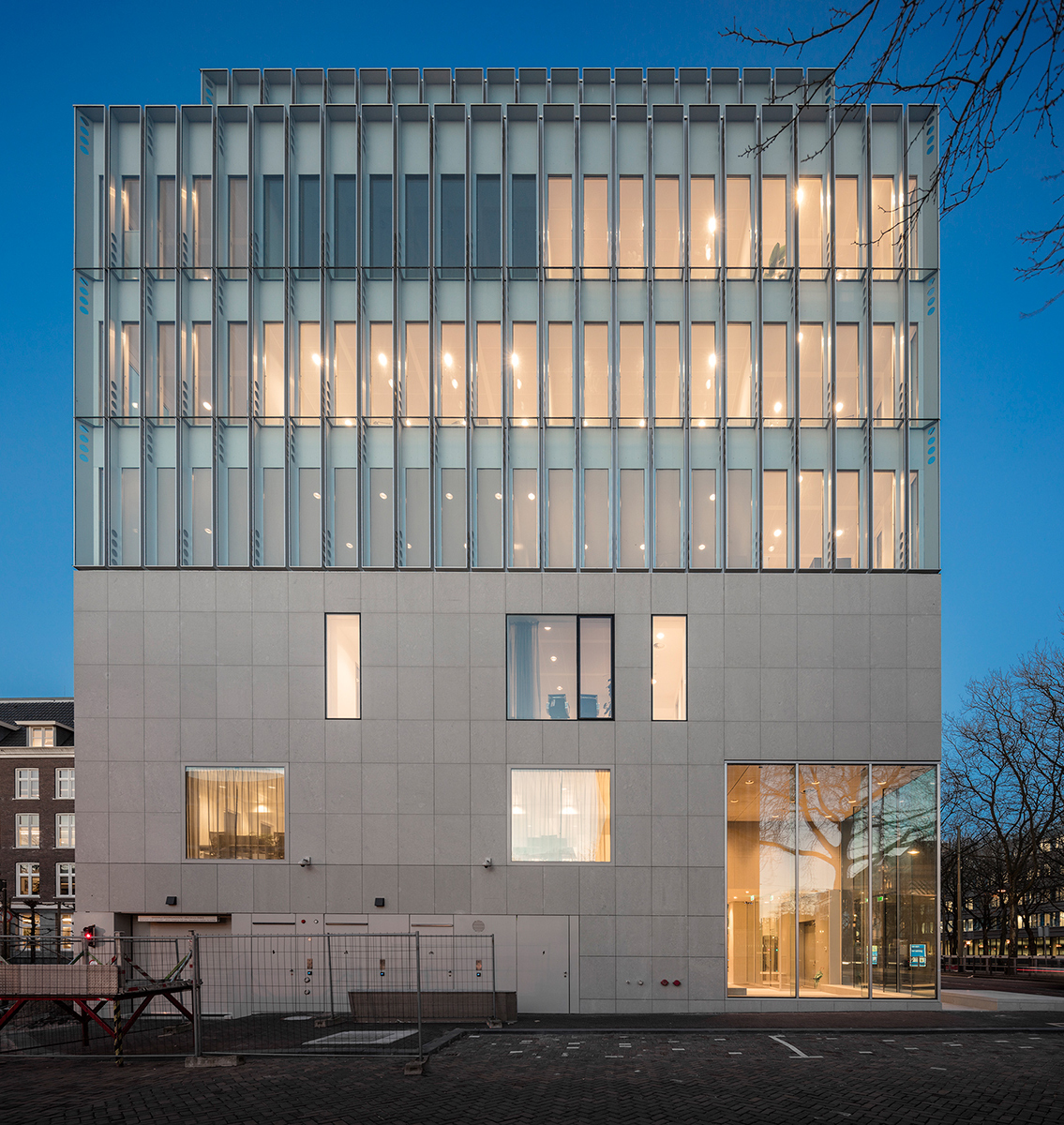 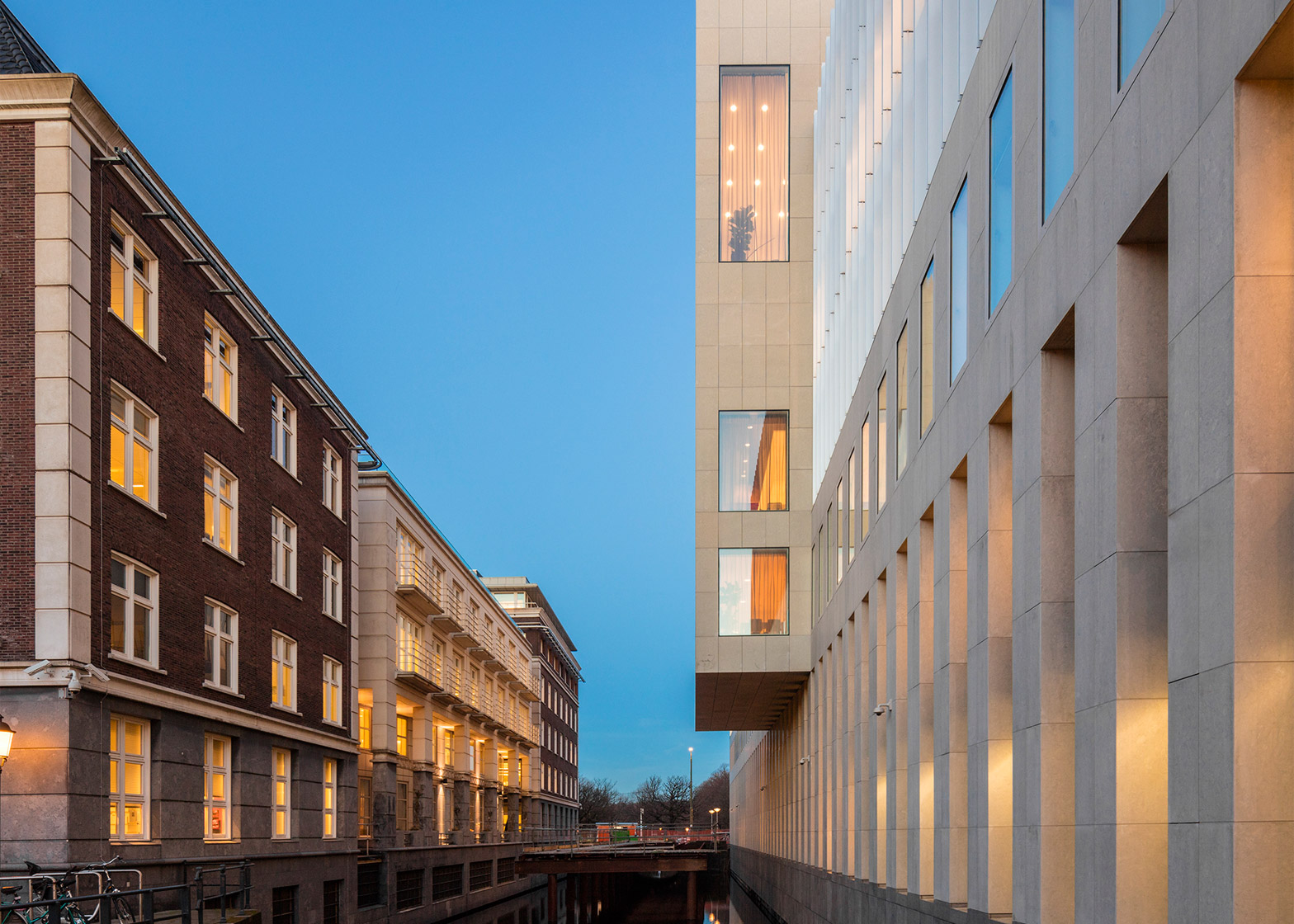 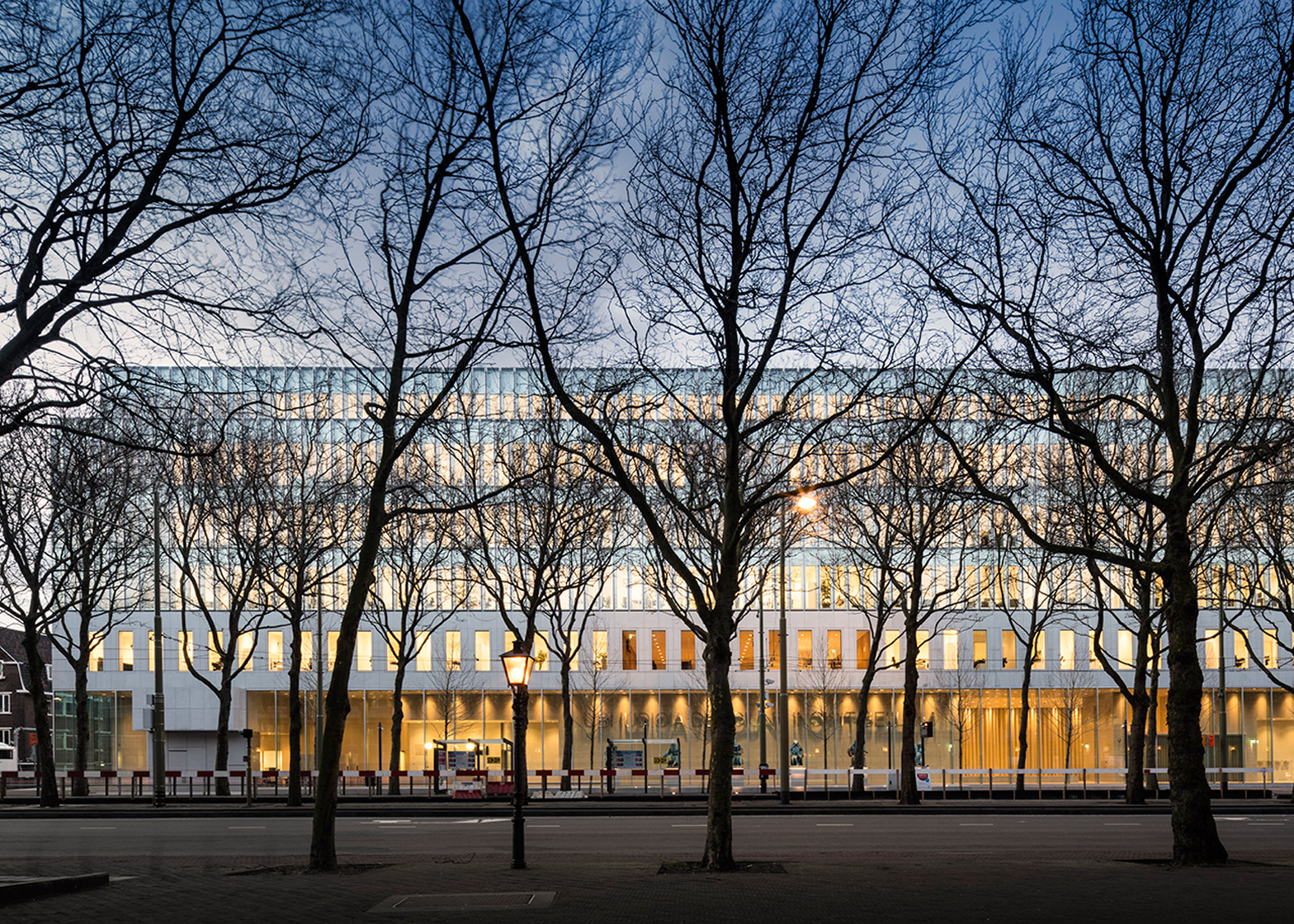 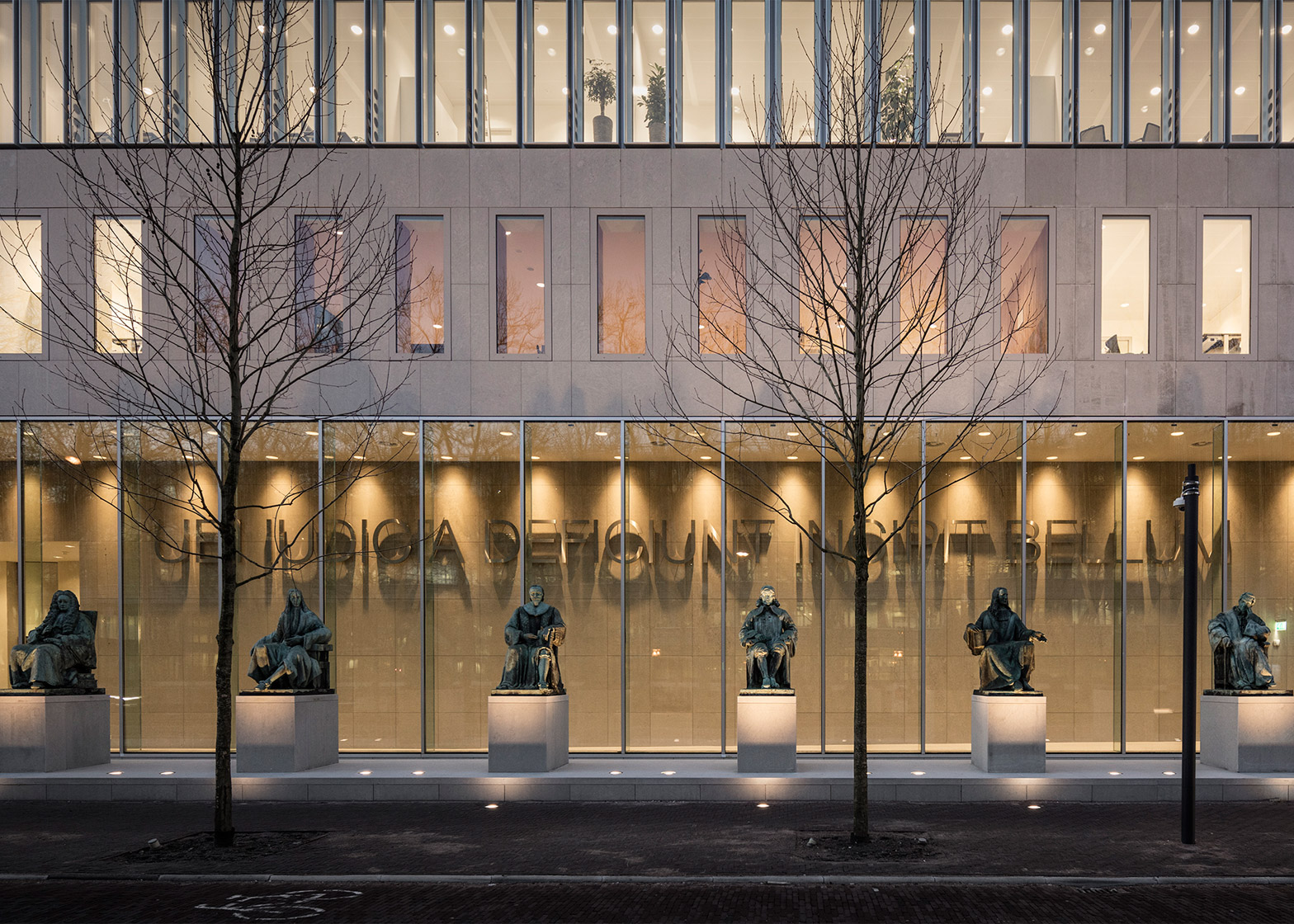