A grid of red sandstone panels dominates every side of this university library in Katowice, Poland, by architects HS99.

Architects Dariusz Herman, Piotr Smierzewski and Wojciech Subalski arranged the rectangular panels in a brickwork-style pattern to «relate to the raw clay bricks on the neighbouring buildings,» but used a different scale.

Gaps between the panels create hundreds of narrow windows, which become slivers of light all over the facade after dark.

HS99 won a competition back in 2002 to design the library, which houses a series of scientific and economic collections for the University of Silesia and is the first stage in a campus-wide redevelopment.

Three large floors form the main volume of the library, matching the scale of the neighbouring university campus buildings, while three upper floors with a smaller footprint create a slab-like tower at the north-east corner.

The architects planned this taller block as a visual marker for students, directing them towards the public square that lines the edge of the building.

Students enter the library through a three-storey-high atrium, which leads to reading rooms, group study areas, conference rooms and individual workspaces amongst the bookshelves.

«The interiors are zoned to respond to the many ways in which research and study can take place,» Smierzewski told Dezeen. «We’ve create a wide variety of environments ranging from social to intimate.»

Precast concrete panels cover the interior walls, while grated ceilings offer glimpses of the mechanical systems behind them. «The utilitarian materiality and finishing alludes to the Silesian region’s heritage rooted in mining and other forms of heavy industry,» said Smierzewski.

In 2002 a competition was launched by the University of Silesia for the design of a new library that would provide a world-class didactic facility for scientific research. The flexibility the winning proposal offered proved to be its major strength when, after securing a building permit, the program was modified to also include the collections of the University of Economics with no changes to the exterior form.

The Scientific Information Centre and Academic Library (Polish acronym: CINiBA) anchors the new campus redevelopment plan to be implemented in the coming years.

Located at the intersection of the east-west axis that forms the spine of the campus, and the north-south axis which connects the recreational grounds by the river to land set aside for further university expansion, the library reinforces the axial organization which has so far been poorly articulated. A central university square at the foot of the library, the FORUM, generates a civic gathering place that opens onto the library’s grand three storey atrium.

The height of the library has been determined by the average height of buildings on the university campus. The north elevation surpassing this height is directed towards the FORUM and houses the library’s closed stacks. This elevation emphasizes the rank and function of the FORUM and is in dialogue with the existing tall buildings which close the east-west axis.

The facades, clad in a repetitious fabric of rich kahan red sandstone, relate to the raw clay bricks on the neighbouring buildings without the connotation of scale inherent to a singular brick element. The exterior treatment abstracts the building’s function of organized book storing while introducing a notion of mystery inseparably connected to books.

The lack of discernible scale produces a monolith when seen from afar that is gradually familiarized. Details such as the decreasing proportions of the façade tiling, the irregular cut of the sandstone slabs, as well as the windows carefully nested inside become visible.

The fenestration projects a stunning patchwork of light onto the FORUM at night, yet in the daytime allows diffused light to permeate into the library’s reading rooms. The resulting strongly introverted interior composition of the library floors focuses one’s attention onto the books while calming the space. Partial isolation from the external world not only influences the atmosphere within but also introduces a flow of time detached from the pulse of the surrounding city. 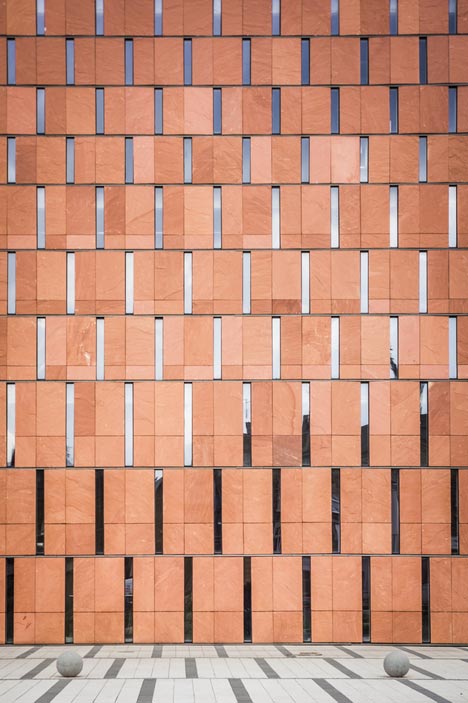 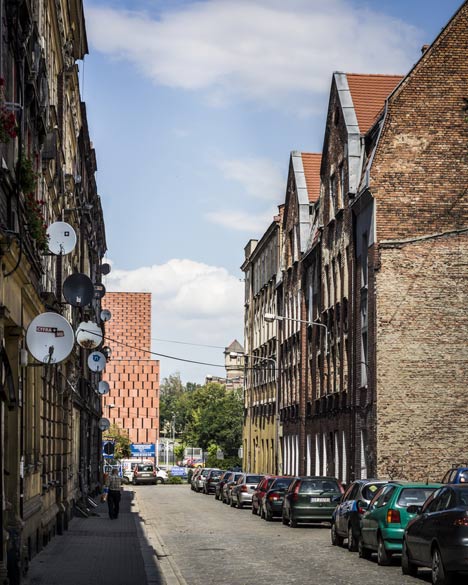 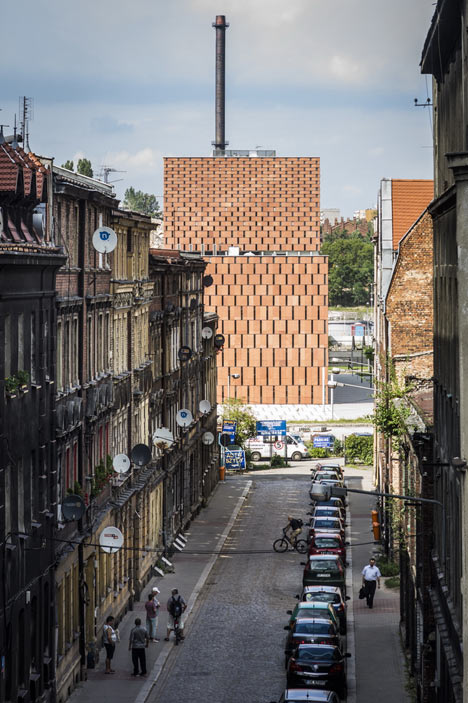 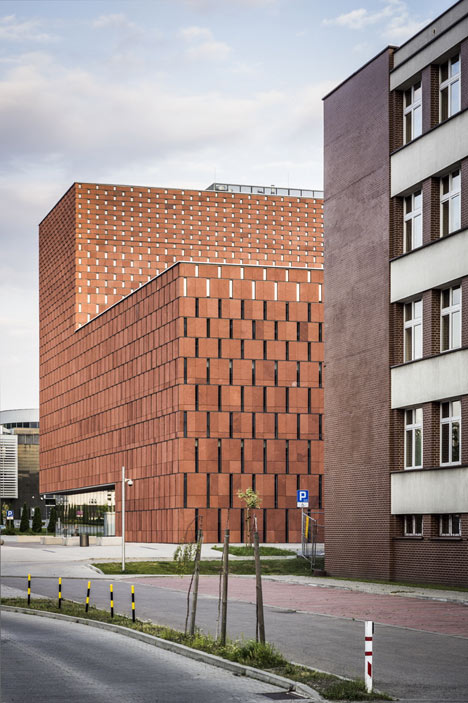 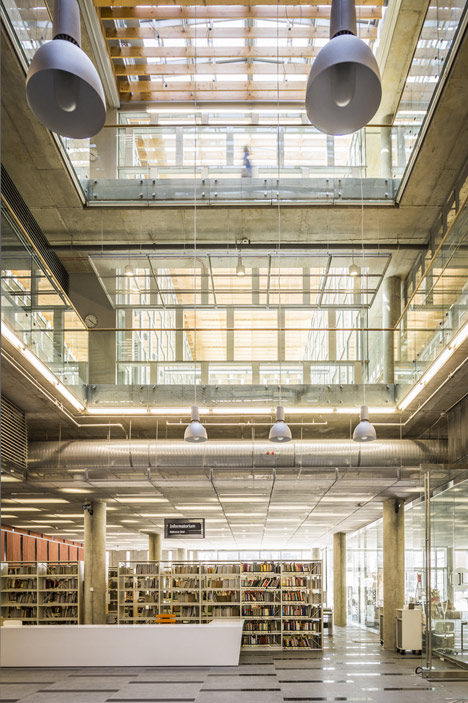 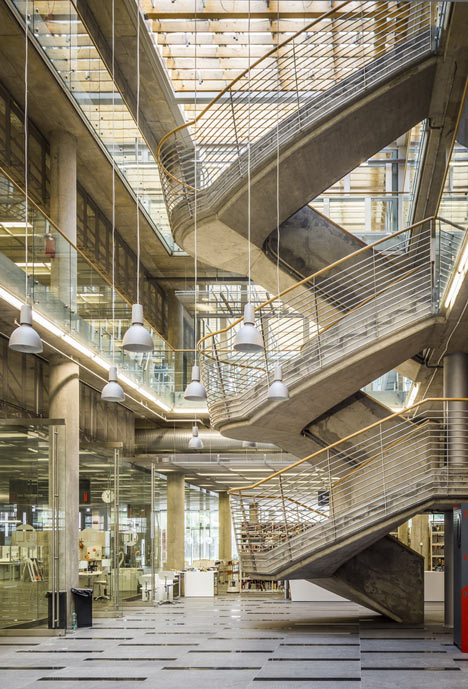 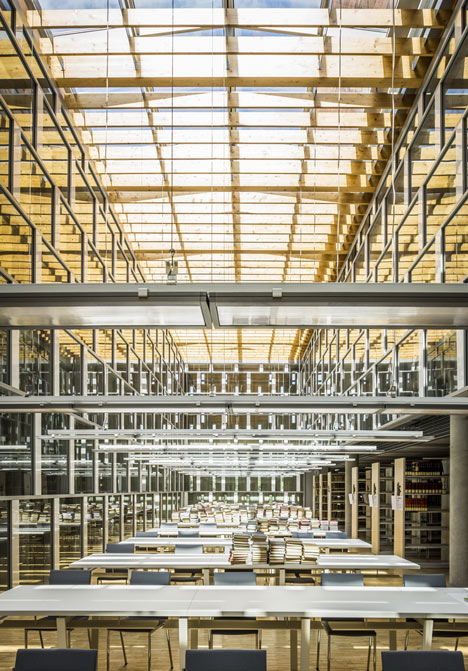 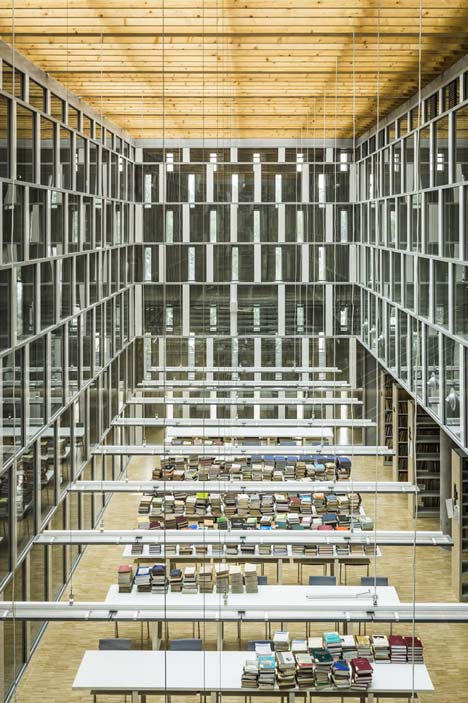 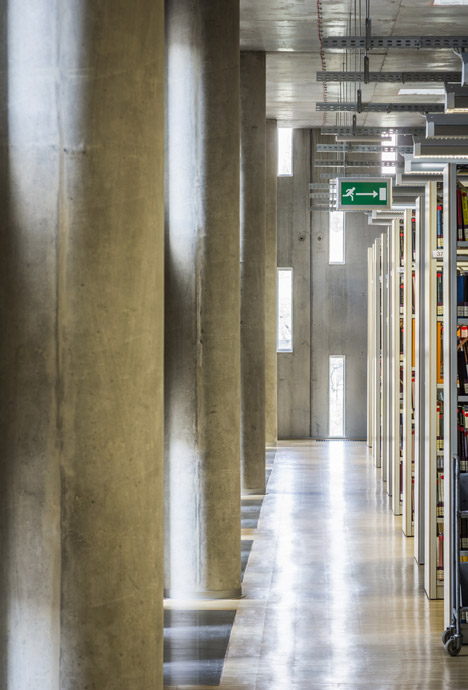