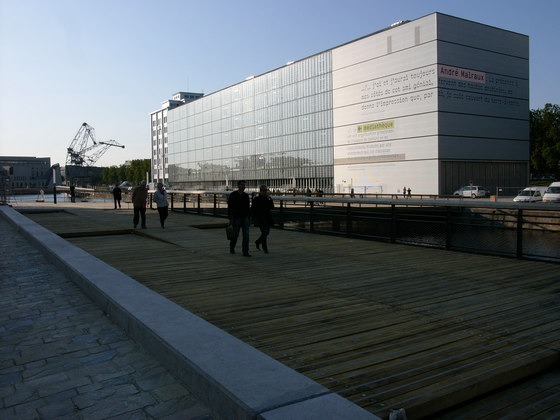 The river landscape demands to be understood horizontally. Everything here bends to the logic of the river: the linearity of the quays, the stretch of the jetty, the alignment of the trees. Down to the buildings themselves, which line up from one end of the jetty to the other, perfectly regular in their continuity on a parallel to the quays, vertically punctuated at their ends – like prows – by their silos.

The beauty of the place lies in this harmony. A little scrap of land miraculously preserved in its original unity, where the industrial function that demanded optimum efficiency in the relation of the buildings to the quays, to the crane rail and to the road system, has determined, on the longitudinal axis of the jetty, the rhythmical and rigorous succession of the volumes.

On this long tongue of land surrounded by water, it is not so much the buildings that define the space as the relation between the buildings; the succession of masses and voids, the play of horizontals and verticals, the axiality, the strict alignment with the quays.

The conversion of the Seegmuller warehouse into a library, because it entails a doubling of the available surface area, threatens the fragile balance of the place.

For this reason, the design fits into a global perspective. It is not simply a matter of solving the problem of converting a warehouse into a library, but of establishing broader principles of composition that will preserve the fundamental qualities of the place. It is in this context that the new function of the site finds the freedom it needs for self-expression.

The silo is kept as a vertical sign in the landscape marking the entrance to the site from the old town. The project retains the magnificent concrete structure of the hall behind it. The extension is a vertical and horizontal continuation, perfectly calibrated with the original structure.

The hall is then separated from its external brick facing. The light, as it enters the space, emphasises the beauty of the pyramidal pillar.

The layout grid is based on the original hall.

The floors of the extension carry on from the existing floors, giving the library wide, free cross-surfaces. Initially intended for storage, they have low ceilings. The transparency of the facades supplies the necessary light, dividing the landscape horizontally and linking the two arms of the canal together. Voids on the edge of the building expand the volumes vertically.

The hall stretches across the whole of the ground floor, from quay to quay.

The silo is empty through its entire height. The stratification of functions can be identified immediately on entry: the five storeys of browsing and reading areas, with the administrative departments above.

Like tags invading the disused hall, the signage now guides the visitor to the upper floors. A long red ribbon on the building itself connects the separate platforms of the public space.

In an industrial idiom, now justified by the limited nature of the available heights, pipes and fittings are left visible. Their tracery thus contributes to the linearity of the site.

As night falls, the internal spaces that captured the landscape in daylight, gradually expand outwards. On the Seegmuller jetty, the Malraux Library glows like a symbol. 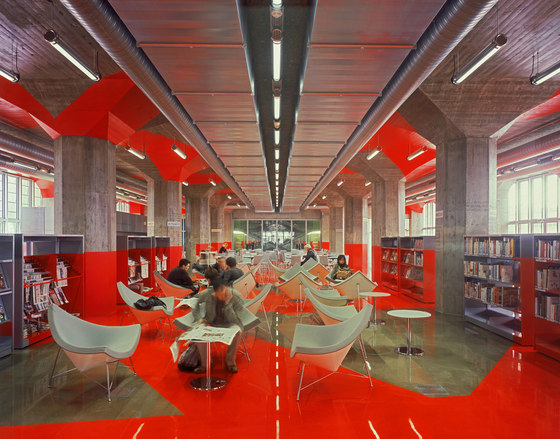 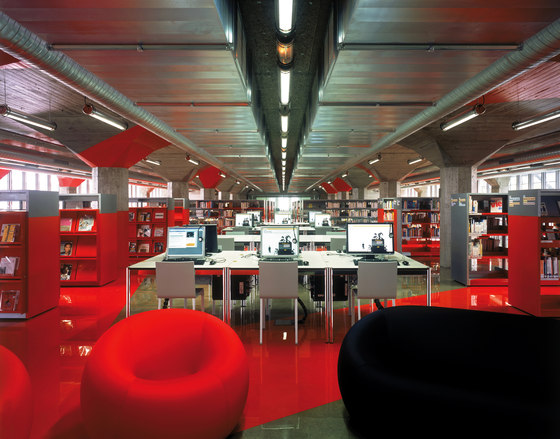 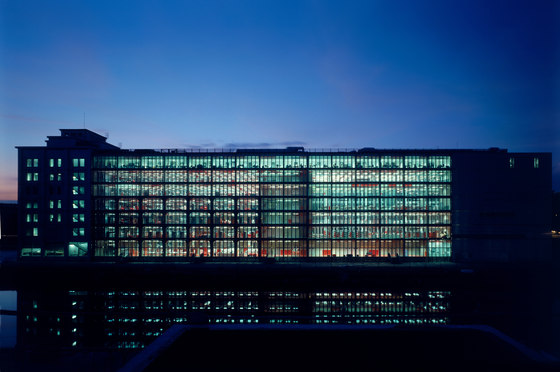 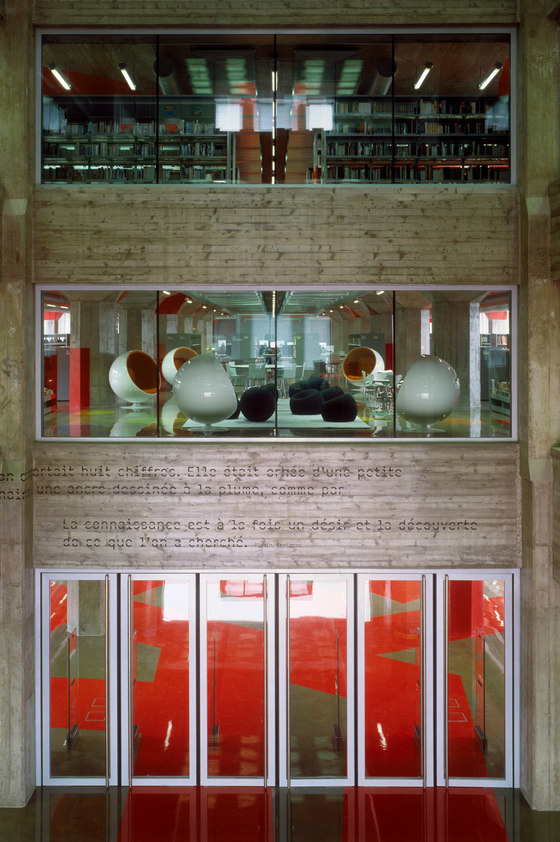 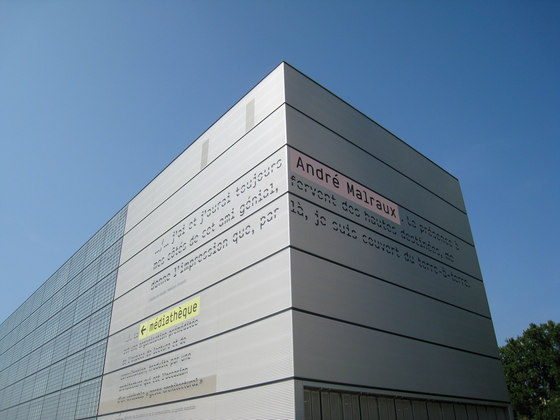 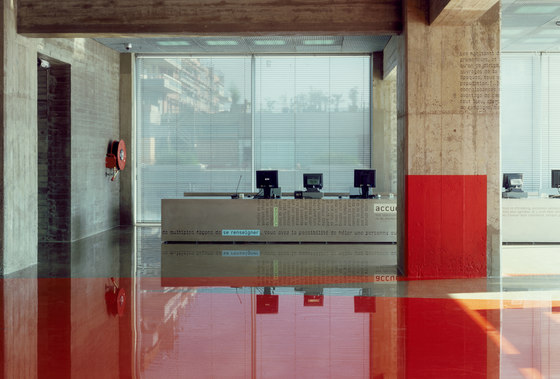 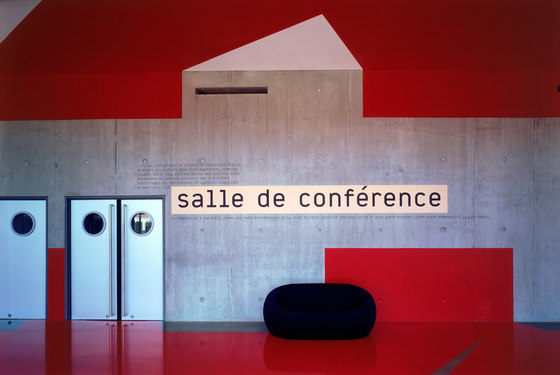 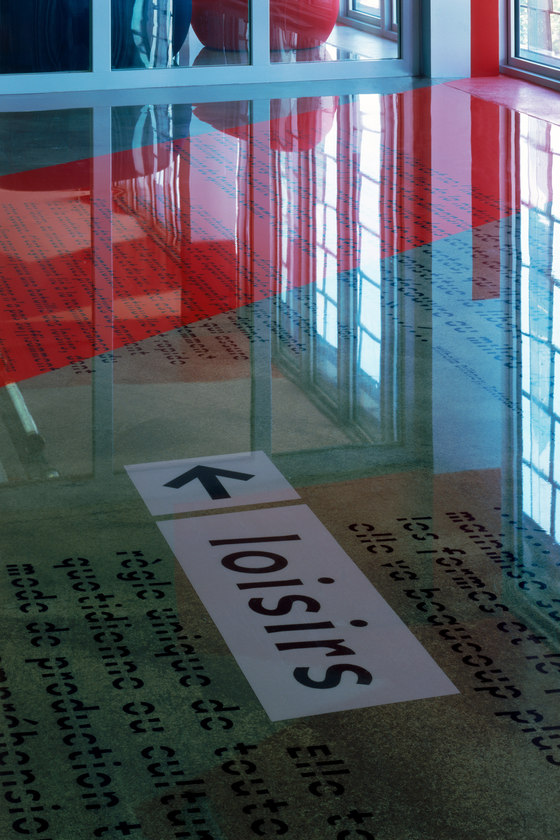 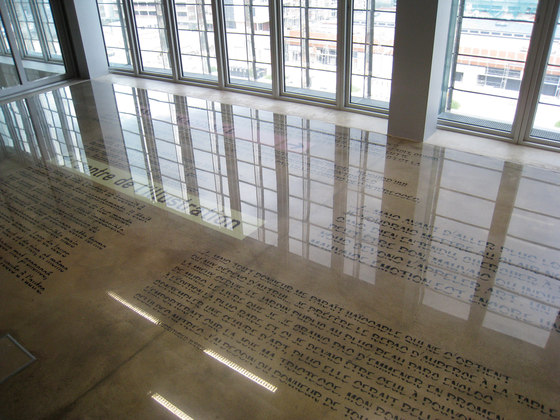 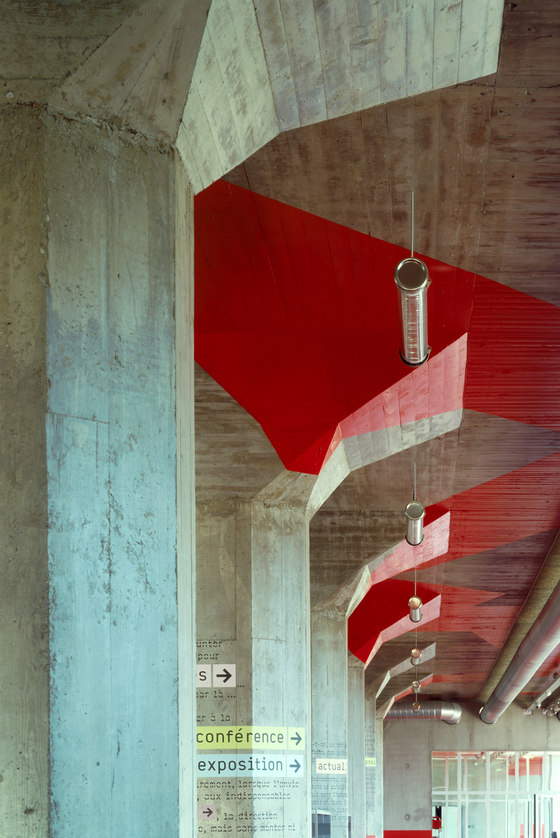 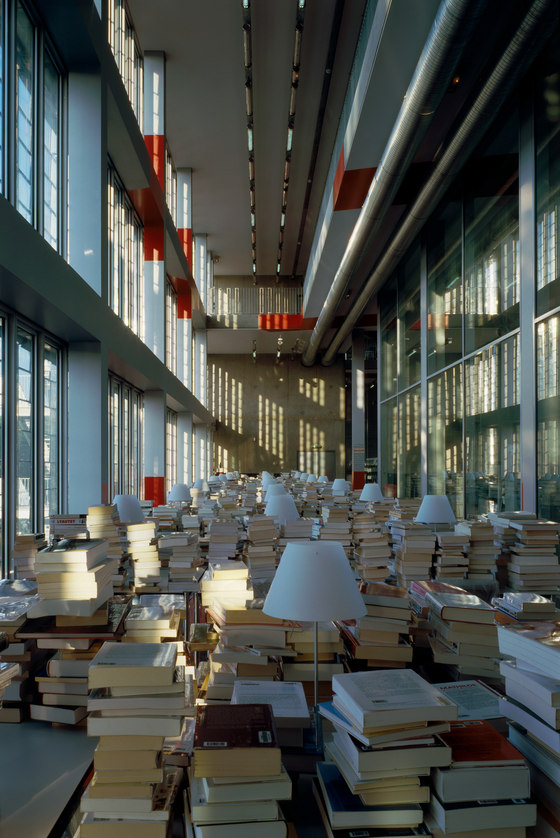