The new MBA Building for the École des Hautes Études Commerciales (HEC) is located on the school’s campus near the historic Paris suburb of Jouy-en-Josas. The existing 1964 campus consists of a series of pavilions in a wooded landscape. The original design intent had been compromised over the years, resulting in a campus which lacked focus and was in need of a clear entrance. The new building is the first stage of a masterplan to meet the demands of growing student and faculty numbers.

The client’s brief specified a building that would not only house the teaching facilities for the MBA course and re-house its administration services, but also provide the main entrance to the campus and reinforce HEC’s image as one of Europe’s top business schools. Planning requirements stipulated a low building volume set back from the site boundary.

The building acts as a gateway to the whole campus, an interface between the wider community and the teaching environment of the school. Located at the southern edge of the existing campus, the MBA Building will be at the core of the new layout once the masterplan for the campus is complete. The building’s envelope unifies a variety of programmatic elements within a single skin. The main entrance opens onto the central hall, a social hub encouraging chance meetings and informal gatherings to facilitate creativity and the exchange of ideas. This hall connects the private areas of the building, such as the administrative offices, to the public areas, including the main auditorium and cafeteria.

The main mass is broken up into a series of blocks that are staggered along the long axis of the building, creating rhythm and variation along the public space on the south side. This movement integrates the building into its context and creates a variety of interior and exterior spaces. The corners of the stepped volumes offer breakout spaces for private study and informal learning, complementing an extensive range of different teaching spaces to suit diverse group sizes and teaching approaches. These include flat-floored seminar rooms set up as AV recording studios for remote learning broadcasts, classic ‘Harvard’ stepped lecture theatres, and regular lecture rooms and classrooms. Ceiling heights increase floor by floor, giving teaching spaces ample light and expansive views. The main auditorium, a black box with a smooth white interior, is lit by a large circular skylight and seats an audience of 250. A series of smaller skylights introduce additional natural light into the room.

The palette of materials used for the building – aluminium for the curtain wall façade and exposed concrete in the interior – refers to the materials of the 1960s campus buildings. The vertically articulated façade is made of alternating modules of 800mm and 500mm, separated by protruding fins, giving depth and plasticity. Narrow horizontal bands in aluminium express the increasing storey heights, further unifying the composition of blocks. The structural and façade strategies play an important role in enhancing the energy performance of the building. The concrete is insulated on the exterior, with metal cladding also acting as a weatherproofing barrier. Exposing the concrete structure within the building takes advantage of the material’s thermal mass; the heat absorbed by the floors and walls in the summer is dispersed at night by a mixed free-cooling system. This is facilitated by the aluminium mesh ceiling, which lets air circulate. 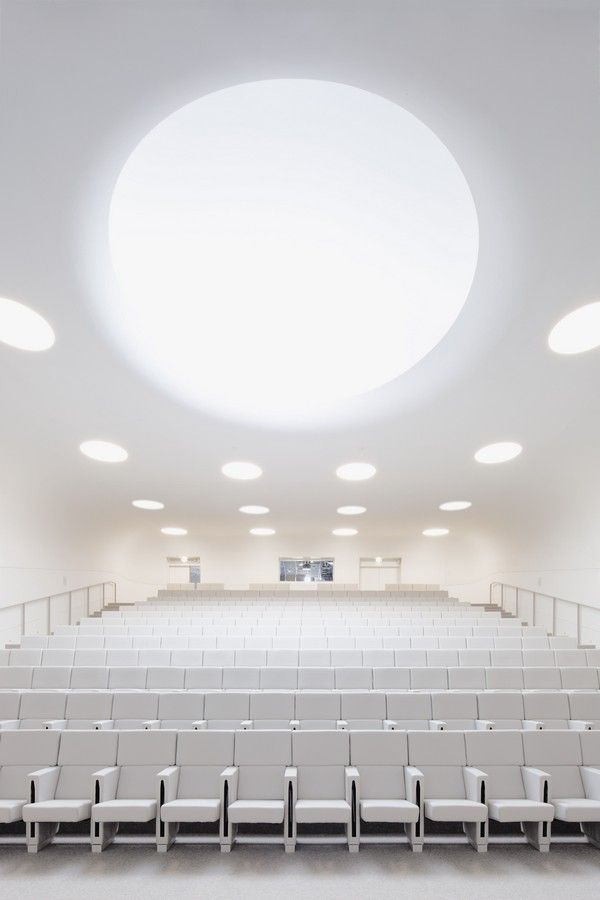