Arnau Vergés was asked to create a multi-purpose outbuilding next to a 17th-century farmhouse in La Vall d’en Bas, a municipality in eastern Spain, as part of a renovation and extension project called Farm Surroundings.

The architect had already renovated the main property to provide room for the fourth generation of the farm’s owners, the Carrera family, in 2011.

Old animal shelters and sheds were cleared from the site to make way for the new concrete and timber-clad structure, which provides storage for farm machinery, a boiler room, a workshop and a changing area for farm workers.

The family’s herds of Aberdeen Angus cattle graze on rolling hills around the property, and the architect envisioned the garage’s green roof as an extension of this landscape.

«By analysing the structures that are to be found around the country house, some still standing and others already blurred, we laid out an intervention in the farmland based on demolishing, strengthening, and building new parts,» explained Vergés.

«This project takes place in the transition strip between the country house and the animals; between the farm and the crops,» he added.

A black metal bridge juts from the upper storey of the farmhouse onto the green roof of the structure, where a circular atrium funnels down to a ground-level courtyard frequented by livestock as well as human residents. A tree grows through the opening, which marks the spot of a former well.

A flight of concrete steps concealed behind a concrete wall leads down the grassy slope to a narrow passageway below the bridge.

This courtyard between the stone gable of the farmhouse and the concrete walls of the outbuilding provides a transitional area between home and workplace for the residents.

«Just by the home entrance, the new building meets the rest of the actors in the play: some new-born walls, the courtyard where there used to be the former well, the bridge, a set of cross sights of the animals and crops,» said the architect.

Timber shutters, made from slats of wood with the same width as the boards used to form the concrete walls, open from one side of the tubular lightwell into the garage and workshop.

The wooden shutters run the full height of the building and hinge upwards to accommodate tall machinery. 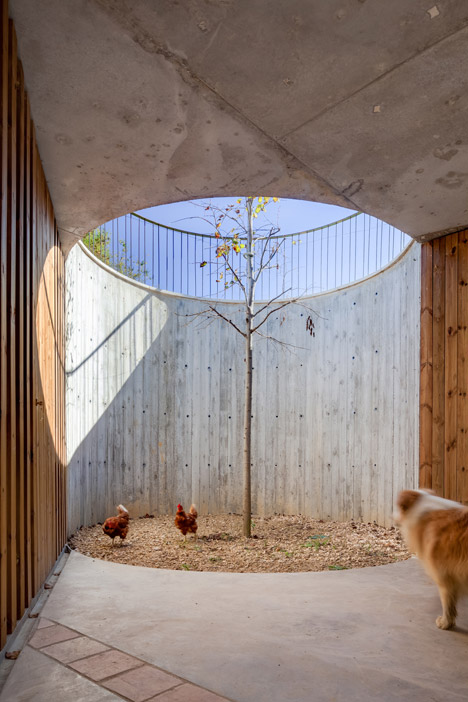