The building of the Małopolska Garden of Arts (MGA) has been constructed according to a competition-winning (Union of Polish Architects, SARP 2005) design by Ingarden & Ewy Architects. The initiative of establishing a new cultural institution in Kraków was proposed a year earlier by Krzysztof Orzechowski, Director of the Juliusz Słowacki Theatre and Janusz Sepioł, at the time the Marshal of the Małopolska Region. It is no coincidence that the building was raised in the vicinity of ul. Karmelicka – a street popular with students and locals alike – opposite the building of the public library, with the aim of ensuring its smooth inclusion into the “bloodstream” of the city.

The building of MGA introduced new spatial order to the old backyards and ruined buildings in Rajska and Szujskiego streets in Krakow. The starting point was a multifunctional hall, which was entered into the outline of the old, 19th-century horse-riding arena, used in the last years of its history as workshops and storage space for the Juliusz Słowacki Theatre in Kraków.

The Małopolska Garden of Arts is a cross between two institutions: the Juliusz Słowacki Theatre and the Malopolska Voivodeship Library. The wing on Szujskiego Street holds a modern art and media library, with multimedia books and music, while the section standing on ul. Rajska has been developed by the theatre, and is equipped with a multifunctional events hall. The new hall – operating, as a studio theatre, conference room, concert hall, and venue for banquets and exhibitions – holds retractable stages for 300 people. State-of-the-art stage technology is present overhead: fixed on hoists and cranes to the steel ceiling girders. This allows dramas and concerts to be performed, and exhibitions, film screenings, symposiums, conferences, art auctions, fashion shows, and many more events to be held. Altogether, the space of about 4300 sq.m houses a theatre together with a cosy cinema with 98 seats, a café, and premises for the organisation of educational, art-related activities.

Honing the form, the architects focused on interaction with the future recipients, which is why the entire spatial form of the symbolic, openwork roofing raised over the garden from the side of Rajska Street – though not functioning as an actual roof – is there to transport the gateway to the stage out onto the street. In this way, the building delicately nudges passers-by with the skilful manipulation of the form, already at first glance giving the onlooker the impression of going beyond the borders of a garden, where culture is grown in evenly planted rows. Further proof of the sophisticated play with the space is the garden itself. Imitating flower beds, the equal bands with low greens are a metaphor of a garden: as much as the architects could afford here. A notable fact is that historically “ulica Rajska” – literally “Paradise Street” – led to the Garden of Paradise, which was later replaced by the developments of the Tobacco Works.

Architect Krzysztof Ingarden (collaborating with Jacek Ewý), claims that the form of the building is a contextual game between “mimesis and the abstraction”. In practice, this means that the building is by no means a simulacrum of the context, but rather draws inspiration from the code of contextual forms by making references to the geometry of the roofs and tissue of the neighbouring structures applied for the abstract geometrical compositions of the façades. The building fits the scale of its environment perfectly by maintaining the lines of the roof and divisions of the façades in line with the composition and linear solutions of the neighbouring buildings.

The final impact is the result of the designers’ sensitivity to signals coming from the environment. For example, the opening in the perforated roof of the garden was formed, especially for the maple tree that grows there. In recognition of its exquisite sense of spatial composition and creative form in historical context, the building was awarded with the Professor Janusz Bogdanowski Prize, for the best architectural achievement in Krakow in the year 2012.

In this place, the cultural life of the Kraków’s young artistic set will blossom under a shared roof. Modern ballet, contemporary theatre forms, audio and video arts, concerts, and all and any other artistic pursuits will find their home here. 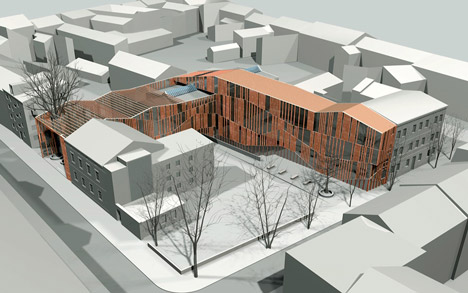