This project brings together four new apartments which run perfectly under, over and trough eachother. The building was erected on the spot where once stood a burnt costume shop. Maarten bought the dilapidated house with his brother and parents, and began puzzling together with his business partner Dries. «There was a lot of thinking concerned. We started from zero, only preserving the rear facade. Not only an urban intervention, but thanks to the old rear facade the original dimensions of the courtyard were also retained.»

«Each apartment overlooks both the street, the central patio, and the courtyard, so that at any time of the day somewhere sunlight can come in.»

Whoever enters the building, stands on a particular courtyard. The architects had shortly before the start of the project on tour in Italy, and there the idea grew. «You will see countless courtyards with stairs, balconies and doors in places where you least expect it. That was also the intention: that you step inside and not immediately know how the apartments are oriented. ‘The staircase consists of different materials and we even spotted a piece of’ reverse ‘staircase. «It reminds of a drawing of graphic artist Escher, which kicks all directions seem to go.» The patio provides a unique circulation throughout the building. The residents come out against each other, or see each other occasionally pass through a window. «Without that privacy is violated. We made sure that no one else is living inside look. «The patio is built with stones recovered from the burned building. Above the patio there’s a large mirror made of polished aluminum. It was positioned in a way it reflects down the sunlight during the day and seen from below it reflects the sky.

«We did not want to design apartments that would feel like an apartment, with all rooms obediently after the other.» It had to be houses, hence all apartments have two or even three floors. «We have thought very longtime about how we could fit the apartments together.» These apartments define eachothers shape and layout. Besides the two floors there are also other elements that reinforce the ‘house feeling’: each apartment has a separate entrance which can be reached with stairs from the patio, and each apartment has both a street, patio and courtyard side. Each resident enjoys fantastic views of the city of Ghent, a private terrace and nooks and crannies that you would not expect in an apartment. One apartment has a meter high atrium, the other a piece of glass in the bedroom floor, or a hall with a sloping wall. On the street side there is a meeting room for the architects, and at the rear of the courtyard threre’s a charming former coach house as a studio for the two.

An exception, perhaps, but the architects design everything by making models. «Because we are so focused on light. We make a model, which we orient in the same way as the future home, and by filming the inside we see how the sunlight penetrates the building. «In the apartment building we find numerous examples of well-positioned roof and interior windows. In the upper apartment, where three boys live together, the bathroom is connected to the living room through an inside window, and look out simultaneously by a roof window: «So you see your own house from unexpected angles in a way it remains fascinating. The head of the architecture department of Ghent said that our project is a kind of synthesis of urban living: How can you live together in a small area, but do not suffer the disadvantages concerning light, circulation and privacy? «

The architects wanted to create the feeling that the apartments have spontaneously, coincidentally, almost organically grown. «We do not want architecture for architects. It should not be finger-on that we have thought hard about the design. The intention is that our project is going to look better by getting older, rather than to decline. Hence we have worked with many beautiful old materials: wood, concrete, old floors, etc. The patio has yet to change: vegetation, balconies and washing lines. It should all be a little more ‘lived’. ‘The façade takes humility on the street. Besides the base, formed by 23 chestnut trees, the façade is a purified version of the classic whitewashed facade. The white plaster was one condition of the city services.

The material is not motivated by ephemeral fads. In the living room of Maarten’s apartment we see a wardrobe made from grooved plywood of Polish pine, which has a beautiful drawing. That pine wood contrasts with the dark smoked oak parquet. The ceiling is partly concrete, partly from pasting, partly from wooden beams and there is even an iron beam visible. «So much more fun if you watch your ceiling from your seat.» In the kitchen we find even a dash reclaimed terracotta floor, feeling like the oak. «We have let a lot of materials coexist, without letting it be too crowded. Name it controlled quantity (laughter). By playing with textures and materials, we create atmosphere and define different residential functions. Sociability is a bit of a dirty word in modern architecture, but honestly we are quite. 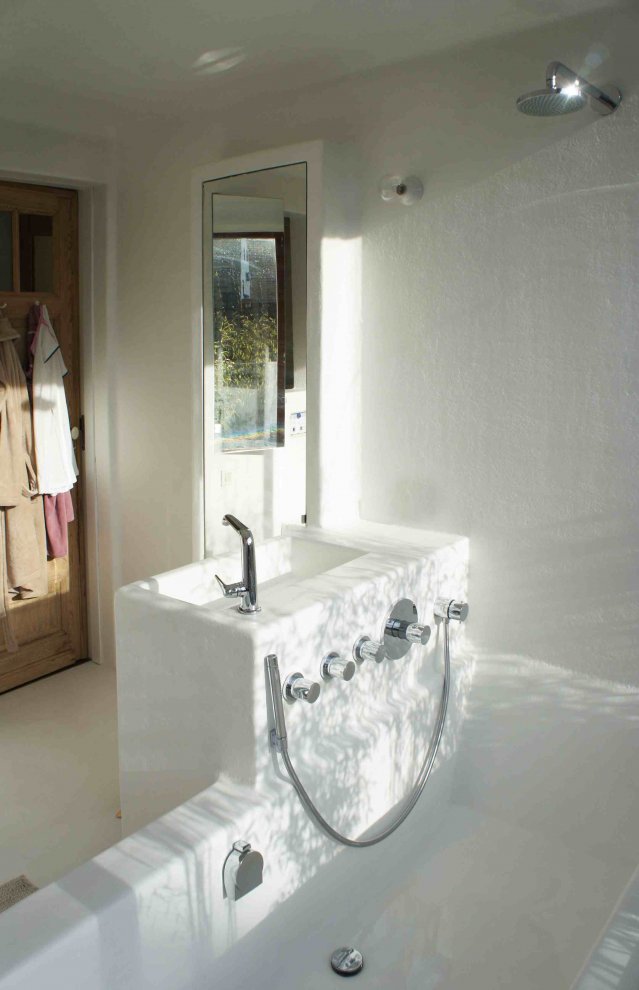