The project for a care home for the elderly in Flanders was commissioned within the framework of the Open Oproep competition by the Vlaamse Bouwmeester and won by Sergison Bates architects in 2004.

The project was funded by the Flemish Government through VIPA (Vlaams Infrastrctuurfonds voor Persoonsgebonden Aangelefenheden), which stipulates the criteria a care facility must meet in order to be granted accredited status, including space allocation per resident and internal arrangements. Completed in July 2011, it is now fully occupied.

The provision of facilities for the elderly is a central concern for developed countries, as average life expectancy increases and quality of life standards rise. In old age, the subjective significance of the home becomes more central, as the working environment ceases to play a central role and reduced autonomy inevitably restricts the field of social activities. In spite of their attachment to their own homes, many older people- even those who are in good health- find that their homes no longer meet their needs adequately and the number of people who move to assisted communal structures is increasing. This often means that older people who need to be supported in their daily life but are still healthy find themselves in an environment which also provides for the very sick, whose physical or mental needs have pre-empted any other care option. The integration of the shared and potentially disparate needs of these different user groups is the critical challenge in the design of this contemporary care home in Flanders.

Huise is a rural village centre in an agricultural landscape. It is identifiable from a distance on a bank of high ground marked by tree-lined borders. Historically, the town provided a focal point for surrounding hamlets, with a market square, church, school, convent and orphanage. It now has a nore fragile existence, as increased mobility within society has shifted the socio-economic heart away from the town towards larger centres.

The neo-classical architecture of the main building on the site-formerly an orphanage and now shared by a school and an existing care home-and the brick boundary wall containing a garden provide a powerful structure which our masterplan seeks to engage.

The masterplan proposes two new buildings which flank the existing one (and a more recent school extension) with a central communal space as a focus. The new buildings, one accommodating the new care home, the other an apartment block of affordable housing units, are set back from the road. The open areas created on either side of the existing building become entrance courtyards for both buildings and are landscaped with trees, field stone sets and cobbles in a similar manner to the other public spaces within the village centre.

The care home is organized into three adjoining volumes of three floors, with two central courtyards open to the sky. The volumes are stepped in plan, achieving a sense of reduced scale for what is in reality the largest building in the village. The 88 rooms and studio bedrooms are arranged in clusters around the perimeter with views out to the landscape. A single large communal living room is positioned on each floor in the centre volume, adjacent to staff and support areas, with views out to the central garden and internal views out to both central courtyards. The circulation spaces vary in width and doors (necessary for fire separation) are located discreetly so that corridor and living room form a single open interior landscape.

The exterior character of the building has a strong horizontal emphasis in direct response to the walled garden environment and flat polder landscape beyond it. Precast concrete rails at each floor level project beyond the building envelope on all elevations, and between them wide brick panels and full height window assemblies create a repetitive order which is adjusted as the interior plan arragements change. The grey-green brick is locally sourced and coursed in a broken bond. This gives a varied texture which emphasizes the brickness of the wall, and ensures that no cut bricks are wasted. The building rests on a concrete plinth which forms the surface of the entrance courtyard at the western end and extends into the garden in other parts.

The essential qualities of the design of residents rooms-a view out to landscape, close proximity to a communal space, a sense of being part of a large household-are complemented by furnishings, fittings and signage. A feeling of being at home is created through the use of elements which residents may recognize from their own lives in the surrounding tiling, parquet flooring, as well as furniture residents can bring from home.

Artist Ana Araujo developed the decorative wallpaper, patterned fabrics and surfaces, while graphic designer Jane Chipchase designed the symbol-based signage and graphic identity for the building. These elements are carefully integrated within the rooms and spaces, enlivened by large amounts of controlled daylight and fresh air, thereby ensuring that the living environment is not experienced as an institutional setting. 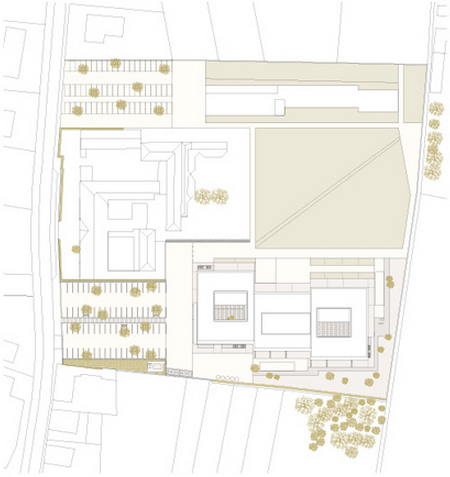