Among the most common criticisms of architects who build Modern buildings is that they are seen to be in different to context both the built and the natural ones. When designing his own house for his wife, Eleanor, and tour children (Susan, Karen , Tom, and Jane) on a one-acre site of what used to be part of an old estate, Beckhard wanted it to be an integral part of the landscape, so much so that he was determined not to eliminate a single one of the six closely spaced specimen trees that marked the site. Befare conceiving a plan, he charted each of the trees-horse chestnut, willow oak, sycamore, two maples, tulip-on the site, essentially weaving the house into the space that remained.

The idea conceptually was to build a house that made itself a part of what was already there. The house and the trees were thought of as inseparable entities. For Beckhard the relationship was clear: he would not like the trees without the house and he wouId not like the house as much without the trees. Beckhard felt that the trees were virtually perfect, «well-worked -out designs.» He was even able to get a variance from the town permitting him to place the house six feet closer to the road than allowed by zoning in arder to save the 60-foot-high multilim bed horse chestnut tree and integrate it into an interior courtyard, making it an actual part of the architecture; from the roadway the tree appears to spring right out of the center of the building. Aside from a few smaller trees planted for effect and additional privacy, the only special landscaping consists of edges of gravel tracing the perimeter of the house that extend into courtyards and areas of ground cover. Breuer and Beckhard consistently sought to bu i Id houses that intruded as little as possible on the landscape, in terms of both materials and placement. Some of their houses hover a mere six inches off the ground, though Beckhard’s is raised to sixteen inches. lndeed , in some cases, such as the Starkey house that is seemingly supported solely by uncannily narrow steel pins, the houses appear almost hesitant to intrude on the earth. Though rendered with a geometric precision certain y unknown in nature, the exterior freestanding stone walls at the front and back of this house (and which are echoed inside) are clearly more in concert with the natural landscape than would be walls of brick or stucco. 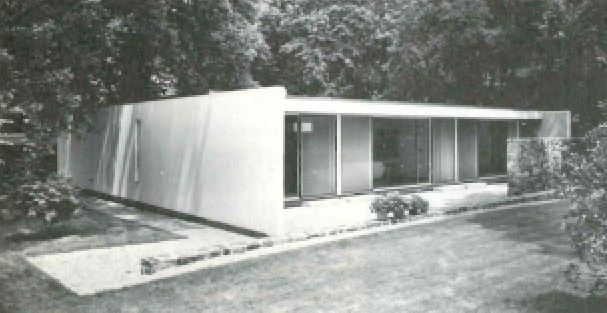 While searching for the right stone, Beckhard had heard of a farmer in Connecticut who was selling a loase fieldstone wall . Upon visiting it, Beckhard bought the wall, had it dismantled, and delivered to the site. He and his stone masan, Richard Allen, worked as true collaborators on erecting sizable sample walls, one of which was knocked down and the other of which became a permanent wall. Then, on his own, Allen assembled the walls so that the stones’ many subtle hues, rugged textures, and , distinctive shapes would be highly articulated. The walls in the front of the house, those that comprise the carport/studio, and the one in the back bracketing the master bedroom are all six-feet six-inches high, tall enough to ensure privacy but never becoming claustrophobic or overbearing. A low sitting wall runs much of the length of the house in back and appears again at the west side service approach. While it is often used as an informal sitting area , the low wall acts al soto absorb the sight pitch of the site so that the interior and exterior appear to be on the same plane.

While freestanding fieldstone walls are regular site features of Breuer and Beckhard houses, here they are especially pronounced; from the entrance side they nearly completely shield the house from the street. Traditionally, main rooms of houses face onto the street. Here the house turns instead into the site-reveling in its topography, fostering privacy, and creating outdoor «rooms» within and outside the envelope of the house. Screening walls that determine private courtyards are commonly used on houses in South American countries. Beckhard’s decision to articulate space and maximize privacy in such a way here hearkens to his two-year-long residency in Caracas , Venezuela, in 1959 – 60 when he was director of a Breuer field office. During that ti me he was greatly impressed by the » Spanish» style entry courtyards and their architectural and psychological effect. Here, no material but stone would do. Brick, stucco, or concrete speak blatantly of human fabrication. Stone maintains a primal integrity. Sunlight plays on the stones throughout the day revealing their rich ness, but it is at night that the stone walls are perhaps best exploited as they are lit by concealed spotlights-an example of Beckhard’s interest in lighting surfaces without revealing the source. 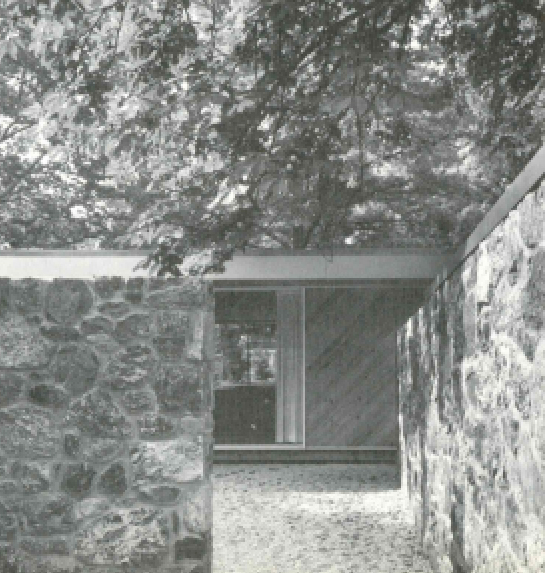 Additional light from inside the house spilis out through the glass walls providing further illumination to the surfaces. The stone is brought inside the house as well, and so the dynamic of related interior and exterior spaces is heightened. Though an open plan prevails, a dramatic stone wall/fireplace again rising six-feet six-inches high and eighteen inches short of the ceiling separates the living room, dining area, and kitchen . A relatively small section of wall adjacent to the monumental fireplace is painted Breuer-blue. Given the rather subdued hues of the bluestone flooring, honey colored cypress ceilings and walls, white bookshelf wall, and white painted gypsum board, the swatch of blue is startling. 1 n retrospect, Beckhard would have chosen to eliminate the wall between the kitchen and dining room. In so doing these two rooms and the living room would have become a more singular space. As al! architects must do occasionally, the wall was a concession to Beckhard ‘s client, his wife, Ellie. 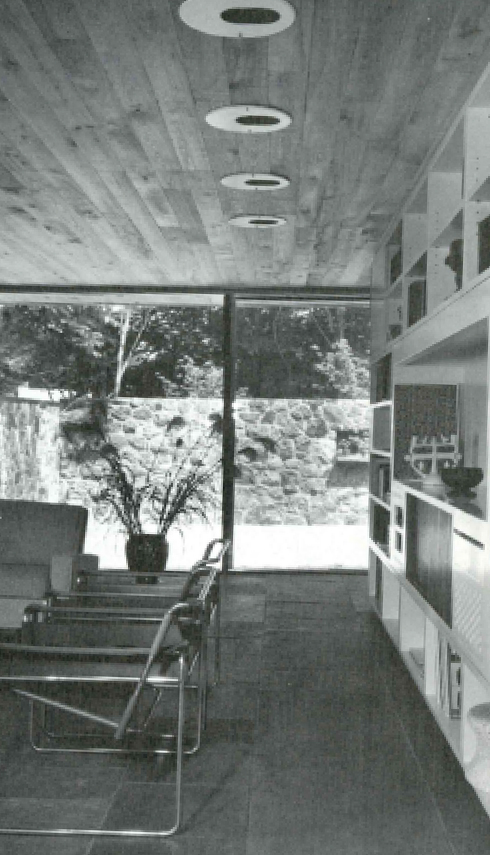 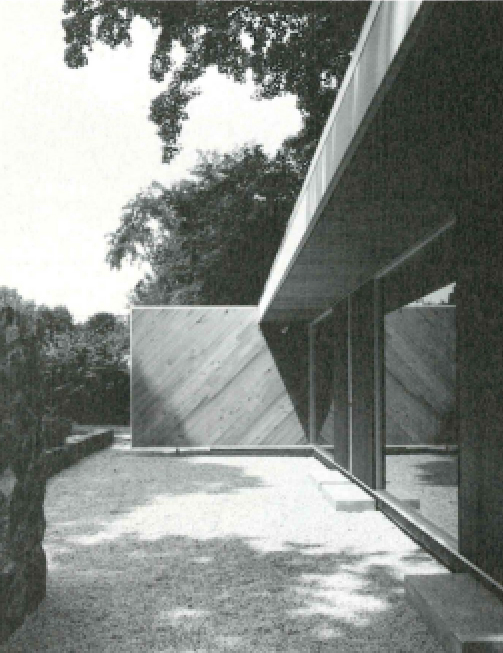