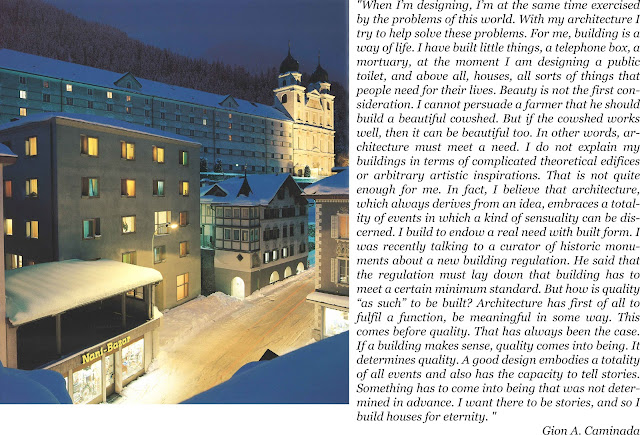 A road trip to explore the Shelters for Roman Archaeological Site in Chur, The Hotel Therme of Vals or the Sumvitg Chapel in Sumvitg – buildings by well-known Swiss architect Peter Zumthor – lead to the discovery of another architect from the region. The valley next to Valls, just 7km from the Zumthor chapel, is home to many of the buildings designed by Gion Caminada. Since 1712 Disentis, the small town overlooking the valley, has been dominated by an imposing baroque abbey. This is the context in which Gion Caminada has designed a Boarding School for Girls.

An architectural competition was set up for a new boarding school in Disentis. Caminada won the commission and completed his project in 2004. The result was not a strictly educational establishment, but rather a kind of “hotel for learning” for girls between 14 and 18 years of age. At first, they inhabit the lower floors, gradually moving upwards. In the architect’s view the girls literally have to «work their way up» in the hierarchy.

The relative large volume of the construction does not dominate the town’s overall architectural structure, as there a whole range of buildings of similar proportions already exist. The building’s image derives from the fact that it has more or less the same dimensions as the building that was there before, occupying the same site in the town centre. Caminada set the new building several meters back from the road however and a small roadside square was hence visually enhanced and the girls’ boarding school was given a public «forecourt».

The solitary building rendered in stone-grey was more firmly embedded into the rock-face behind it. This was of great consequence for the ground plan of each of the building’s five story, as the site of the building at -or rather in- the rock-face, allowed each story to have its own entrance: a topographical factor that encouraged aspirations to endow the girls’ boarding school with unusual sensual and spatial qualities and that was one of the reasons that make Caminada won the competition since he eliminated the need for a secondary means of escape. 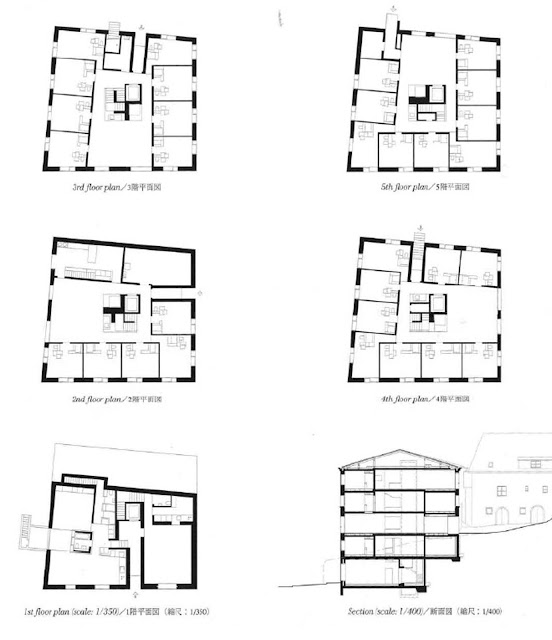 At the centre of the Boarding school is a solid concrete core that accommodates the lift, the stairs, the kitchen quarters and a rest area. The alignment of the ground plan shifts by 90 degrees on each floor, in line with the corkscrew turn of the staircase. The effect of this is evident on the exterior facade, where the rhythmic line of windows is interrupted on each side by a larger aperture. Behind these larger windows there is a common room on each floor.

The central area of each common room is occupied by a tea-kitchen and a special arrangement: the cuddle corner. These cuddle corners – the conception of with derives from the bench traditionally built around the large stoves in Swiss peasant homes – are cut like caves into the concrete core of the building. They were designed as zones for the exchange of women’s secrets, they are, naturally, heated on three sides. For this reason their walls are lines with sheets of polished brass.

Each common room is also equipped with robust hardwood floors, oak tables and benches, all designed to outlive many generations of growing girls. The aforementioned large windows serve not only as good source of daylight for the deep-set rooms but can also be swung completely open sideways, and thus compensate the house’s lack of balconies,a kind of logia. 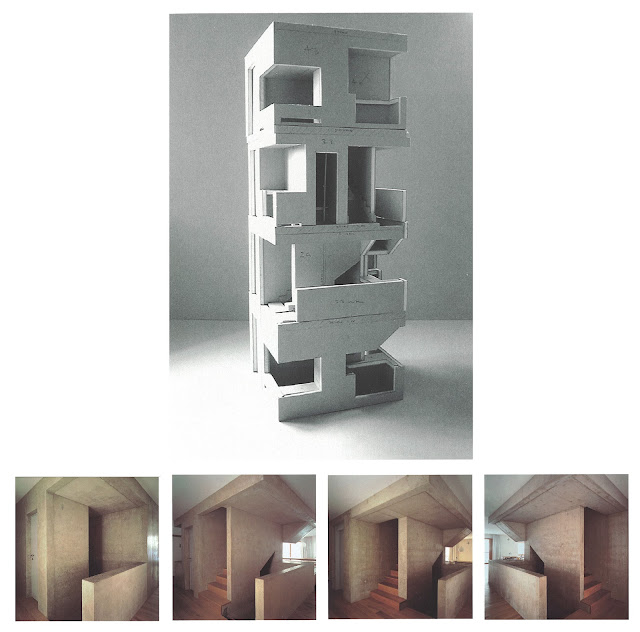 The stair demands particular attention. Gion Caminada not infrequently mentions the fascination that Eduardo Chillida’s sculptures hold from him. Concrete is a material that fascinates the sculptor and the architect alike. Mixed in certain proportions and subjected to particular processes, concrete can mutate from an extremely conventional building material into a thoroughly noble element. In the Caminada’s building the stair is made by cubes stocked one upon the other, Gion Caminada developed a three-dimensional shape, into which he cut both cavities and horizontal or oblique indentations that connect the cubes.

The stair was built from fine-grain, site-mixed concrete, bonded with locally quarried, untreated gravel and 50% white cement. Not only the visual but also the haptic results speak for themselves: the concrete’s surface acquired a tender, grey-beige color, with a sight gloss that positively invites one to touch it. 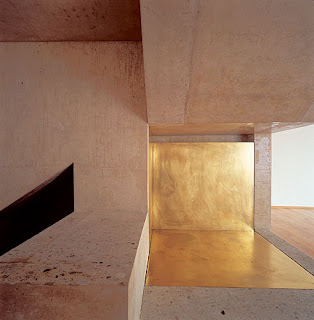 Regarding his staircase-sculpture, Gion Caminada maintains that he is today more inspired by experimenting with mass. It thereby seems at first incredible that he now achieves these kind of results, given that he was preoccupied for many years with wood as a primary material, as well as with the local tradition of «Stickbau», a construction method based on interwoven wooden beams. His intention is perhaps to express the fact that, with the staircase, he succeeded for the first time in dealing with concrete.

Every girl that lives there has her own apartment. All interior fittings were designed by Gion Caminada and manufactured in local carpentry workshops. As each room also had to contain a shower, he was compelled to employ artistic cunning: the showers were hence integrated into the overall space, whereby the armatures are hidden in the daytime by shower curtains; and the wardrobe doors function also as a WC door. The young women are particularly enthusiastic about the wide window seats, set above the radiators. The overall interior design of the rooms reveals that Caminada gave serious thought to the current life-style and need of the girls. 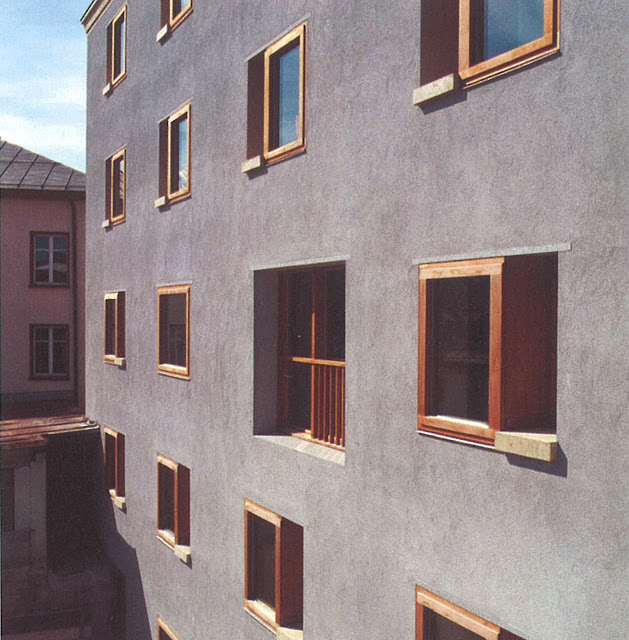