According to Louis I. Kahn the first school began under a tree, when a man who knew he was a teacher began to discuss what he had learned with others who did not know they were students. Like those students, children under 3 years old learn intuitively and unconsciously. Drawing a parallel with the story of Kahn, one might wonder about the role that tree, that is, architecture, plays in the practice of teaching. We strongly believe in the pedagogical value of architecture and, in the case of a nursery school, its actual capacity to create opportunities that help children to develop suggestive, attractive and safely this stage of their life. The nursery school in Berriozar is established according to a model inherited from the Italian municipal schools of Reggio Emilia, where childcare facilities are primarily organized around a main ‘square’ that serves as interaction and meeting point and as a space meant for the common activities of the school. Given the distinctive longitudinal proportion of the plot, the square had to be placed in a central position along with two separate courtyards at the ends. Thus, the classrooms and facilities moved into an intermediate position, directly connected to both the central square –illuminated and understood as an outer space– and the playgrounds, treated as an extension of the physical and visual interior spaces. This plant layout forces to act on the deck in order to naturally illuminate and ventilate all rooms. The powerful geometry of these skylights, that arise depending on the activity that takes place on the ground, becomes one of the hallmarks of the project. The construction is arranged from a modulated structure of reinforced concrete that qualifies and defines both the inner space and the way in which light falls on it.

A colorful lattice wraps the building and its playgrounds, clarifying and enriching the relationship between the street and the interior spaces. Given this external chromatic display linked to childlike and playful character of the building, the interior offers a serene and neutral atmosphere thanks to the generous overhead homogeneous and natural lighting. The dual scale and play are, finally, the two fundamental tools used to define the interior space and the equipment. The inescapable playful condition of the spaces complements with the dimensional control in relation to the different sizes of children and caregivers and the different objectives pursued: for kids, premises adapted to the activities an the size of the groups and, for caregivers, high permeability and transparency to facilitate visual control of children. 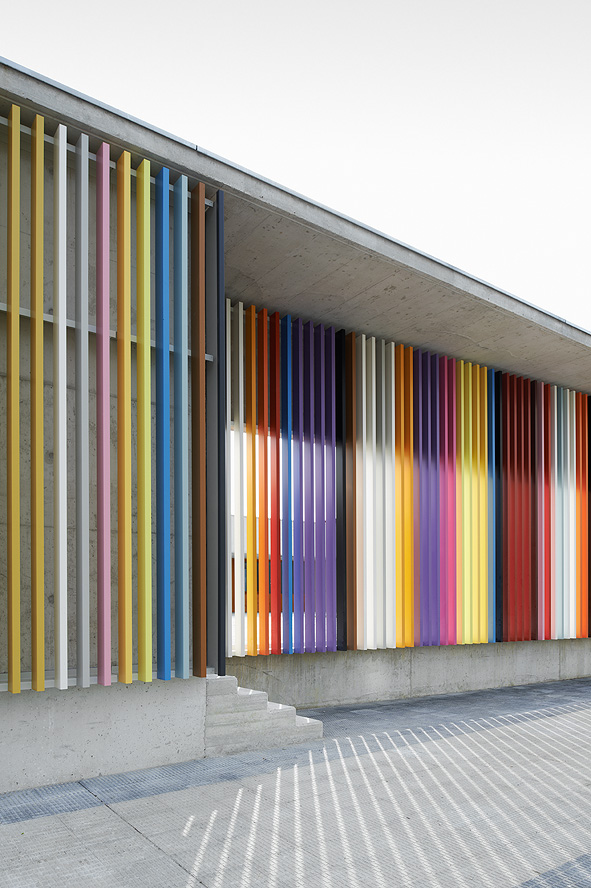 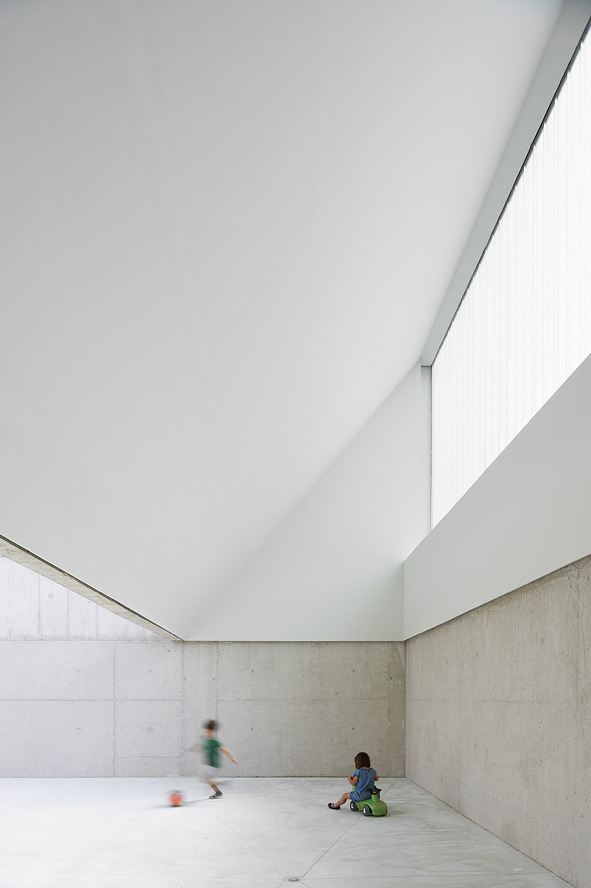 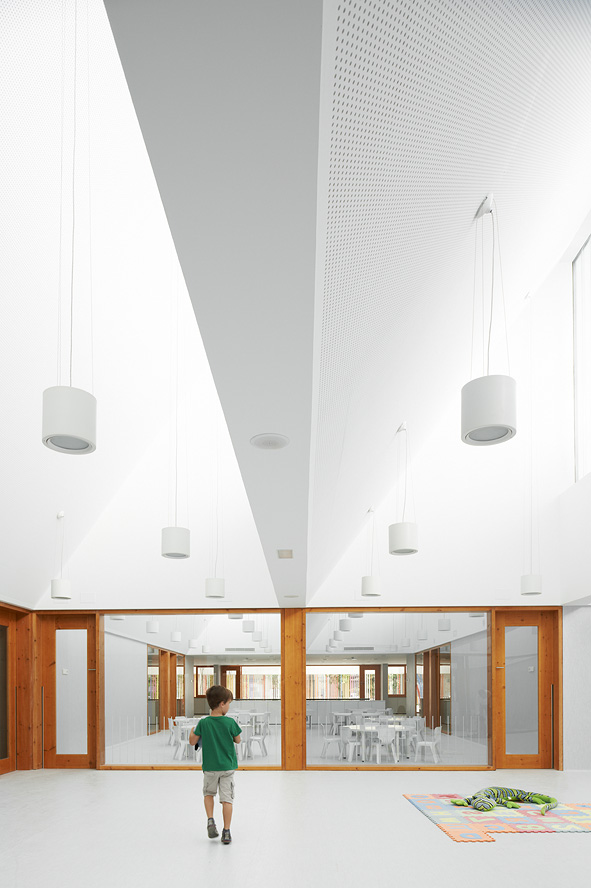 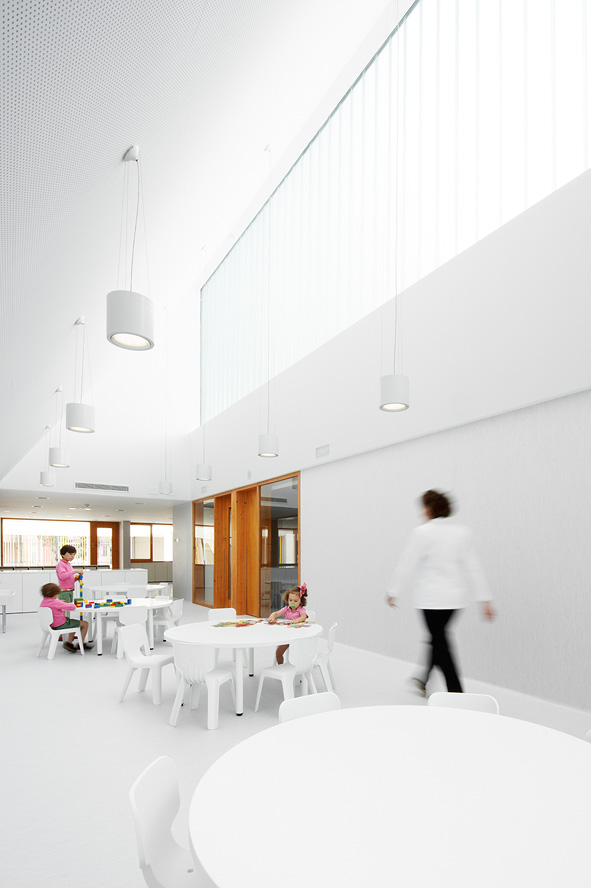 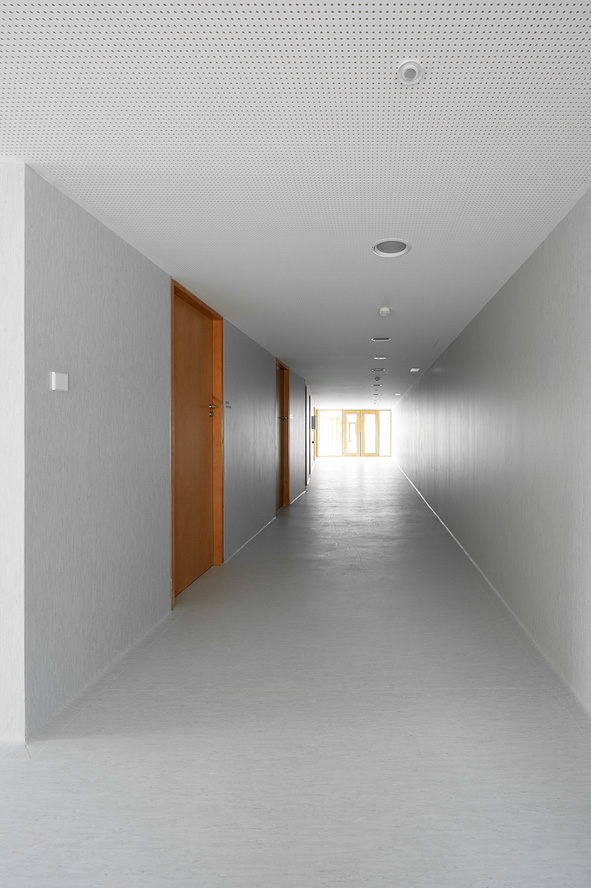