There is today an enormous potential in the re-scripting of grand industrial spaces, survivors from an epoch that had less trouble expressing itself and its mechanical or technical potency than our current mean and exploitative ‘global shopping-centre-culture’. One thinks of São Paulo’s Fábrica da Pompéia by Lina Bo Bardi, London’s Tate Bankside, or the Zollverein Coal Mine in Essen, Germany.

This was our first reaction as our client drove his black Porsche into the rusting cathedral of Hannover’s ‘U-boat Hall’. Was it a panic reaction at the end of WW II to build a submarine production space so far from the North Sea? The structure of the hall had in fact been originally designed for a U-boat production site of a naval dockyard in Wilhelmshaven. As it turned out the enigmatically named ‘U-boat Hall’ was only finished in 1944 and was thus not used for armament production.

Now sliced like salami the ‘Industrial Heritage Structure’ is to house various commercial outlets – a mega Bicycle Emporium where racing bikes can be tested in the shop or this landscape of coloured furniture.

This is in fact two shops; RS (wholesome wood) and Yellow (sub-designer). BOLLES+WILSON have already realized their flagship store in Münster and the HQ Building, a rooftop lake above a ‘big box’ two-floor warehouse/distribution centre.

For the ‘U-boat Hall’ the rent was based on the square meters of the hall’s floor. The architectural question was how to maximize this floor area with a selling landscape and a back of house warehouse for customers to pick up their new sofa / table / lamp.

The magnificent scale of rusting columns, elevated crane track and skylight box, resist the invasion of domestic equipment, relegating it to the status of ‘a carpet of coloured pixels’ spread across the selling decks. 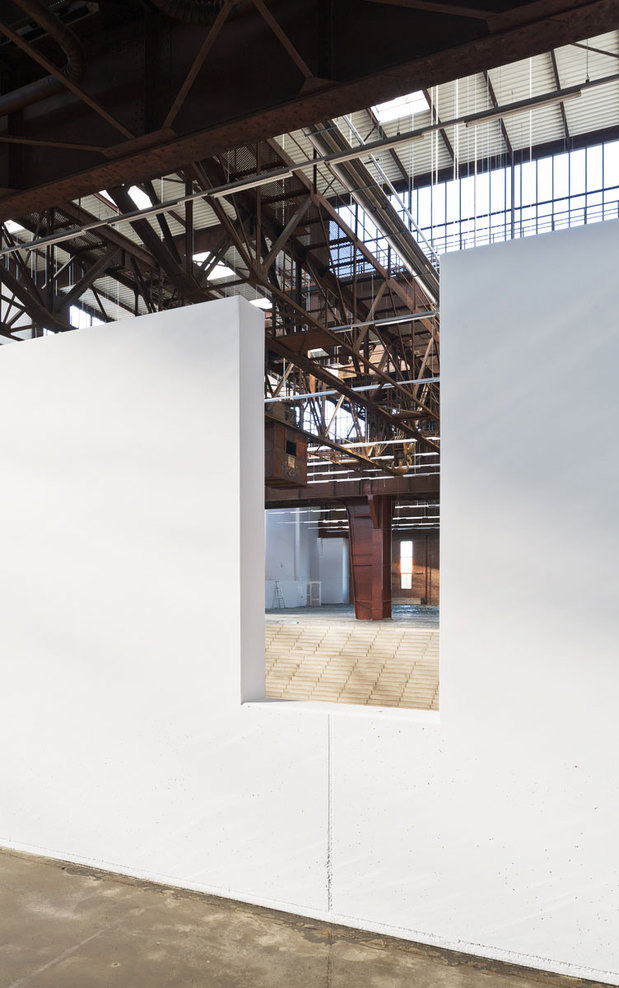