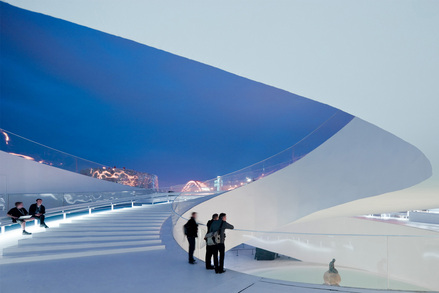 If you are near by Rotterdam I recomend you to buy the tickects for the Bjarke Ingels´ lecture. Bellow this lines you can find the information that the Netherlands Architecture Institute (NAI) provides in their website.

“If Hollywood starts ripping off sustainable architecture to portray science fiction it could be a sign we are moving towards hedonistic sustainability.” Bjarke Ingels

A sustainable waste-to-energy-plant in Copenhagen with a roof that functions as a ski slope. The Danish pavilion at the World Expo in Shanghai that shows the sustainability qualities of Danish cities. Both are examples of designs in which the Danish architect Bjarke Ingels shows that sustainability does not have to be a burden, but can increase the quality of life. On Thursday, March 22 Ingels will talk about this notion of so-called ‘hedonistic sustainability’ and how this is translated in his design practice. The lecture will take place in De Doelen in Rotterdam.
Bjarke Ingels
Bjarke Ingels started BIG-Bjarke Ingels Group in 2006 after co-founding PLOT Architects in 2001 and working at OMA in Rotterdam. Through a series of award-winning design projects and buildings, Bjarke Ingels has created an international reputation as a member of a new generation of architects that combine shrewd analysis, playful experimentation, social responsibility and humour. In 2004, he was awarded the Golden Lion at the Venice Biennale for the Stavanger Concert House, and the following year he received the Forum AID Award for the VM Houses. Since its completion, The Mountain has received numerous awards. Recently, Ingels was rated as one of the 100 most creative people in business by New York based Fast Company magazine as well as being named Wall Street Journal’s Architectural Innovator of 2011. Alongside his architectural practice, Ingels has been active as a Visiting Professor at several University’s among them at Harvard and Yale.