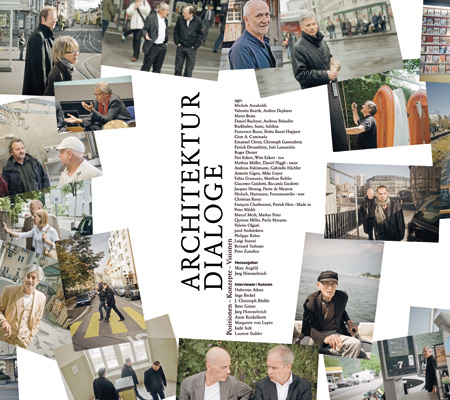 For decades, Swiss architecture has enjoyed international acclaim. Yet how are Helvetic architects positioning themselves as even Switzerland’s working environment undergoes drastic change? What impact are they having at present? In «Architecture Dialogues», nine interviewers talk with 30 leading Swiss architects about guiding themes, directions and perspectives in their theoretical explorations and building projects.

Over the course of conversation, they not only present their positions on architecture at the structural, conceptual and aesthetic level, but also their projections for the future of their discipline against the backdrop of the challenges emerging as the 21st century gets underway. The viewpoints compiled in the following primer offer insight into the possibilities and limitations encountered by these architects in their complex roles and responsibilities. It serves both as a snapshot as well as an important contribution to the international discourse on architecture.
Among the interviewed architects and offices are Herzog & de Meuron, Peter Zumthor, Valerio Olgiati, Mario Botta, Luigi Snozzi and many others.