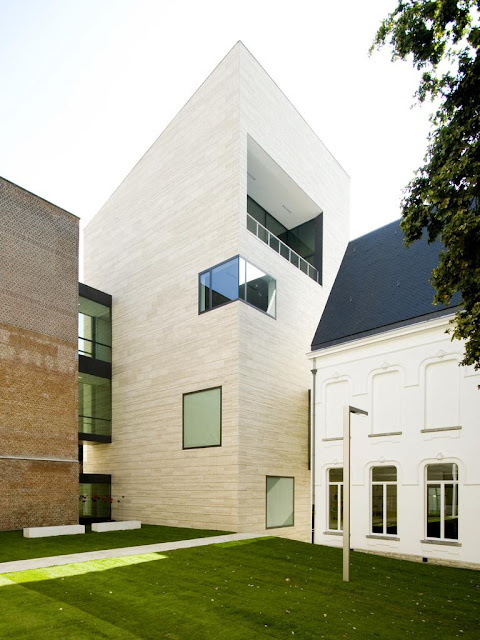 
The old Vander Kelen-Mertens museum has been extended and reorganised as an integrated structure and is now known as ‘M’ for Museum, Leuven. ‘M’ preserves the existing collections, exhibits them and associates them with contemporary art and temporary expositions.
The existing ‘huis van der Kelen’, the ‘academy building’ and the portico are connected with new buildings, encircling the central oak tree in the inner courtyard. The boundaries of the site are marked by elevated structures, making the museum more discernible in the cityscape. The generally closed travertine façade with well chosen openings contrasts with the existing brick buildings. Thus connecting and integrating them, while presenting them as separate entities.
The museum garden was developed as a meeting place and, with its passageways, forms part of a network of informal passages which are typical of Leuven, a place where various inner courtyards of college and university buildings are interwoven into the city.
In the Vanderkelenstreet, the public space was defined by the addition of an ‘elevated public platform’. This elevated zone defines the public space and fits in with the existing Tuscan pillar portico -international symbol of museums-, as a formal entrance to the site and the museum.
This platform suggests a new urban spatiality where the museum is given its place to exhibit. As a transition between the street and the museum, a kind of ‘introduction’, or ‘vestibule’, has been created.
The highest rooftop has been treated the same way and is organised as an open-air museum between the belvedère on the Savoyestreet and the highest floor of the academy building.